Villa D'Este is a UNESCO World Heritage Site at Tivoli, easily reached by train or car from Rome. Of it UNESCO says, "... one of the most remarkable and comprehensive illustrations of Renaissance culture at its most refined. Its innovative design along with the architectural components in the garden (fountains, ornamental basins, etc.) make this a unique example of an Italian 16th-century garden. The Villa d'Este was an early model for the development of European gardens." It's most renowned for the multitude of water features and fountains — over 500, in a relatively compact space. It also has some features that must have seemed a bit like magic in the 16th century such as fountains that switched on as visitor walked by and a "water organ" where channeled water created musical sounds.

Here are some of the fountains I liked. There's a wealth of info about Villa D'Este online if you're interested to learn more. If you'll be in the area, I highly recommend stopping by. As I said in previous Italy posts, this trip was from so long ago, I'm just basically sharing some photos and not going into the kind of detail I usually do with a recently completed trip or one I document in real time. But I hope you enjoy some pics. 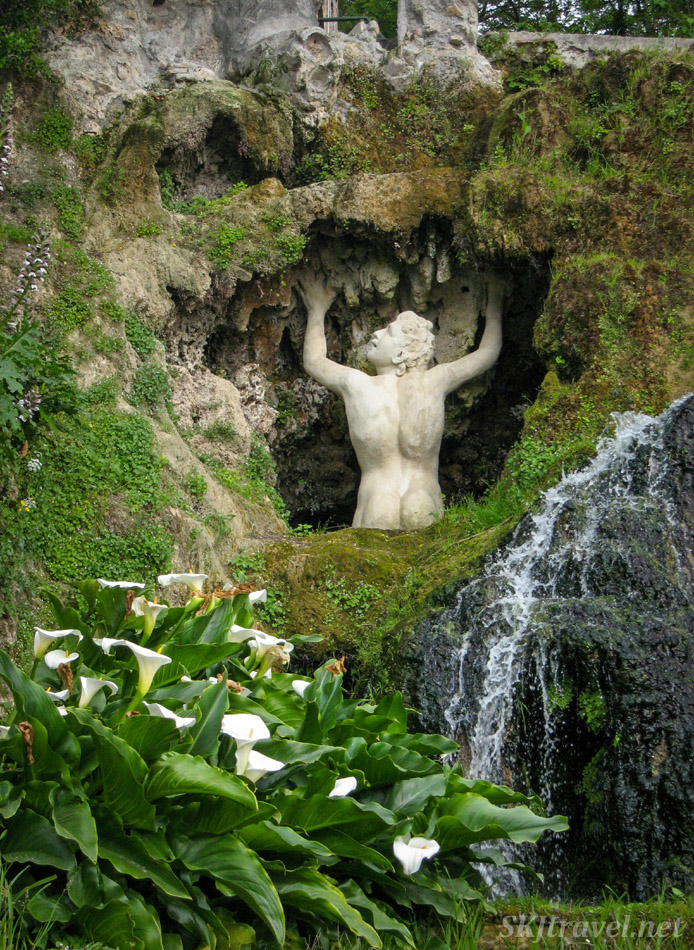 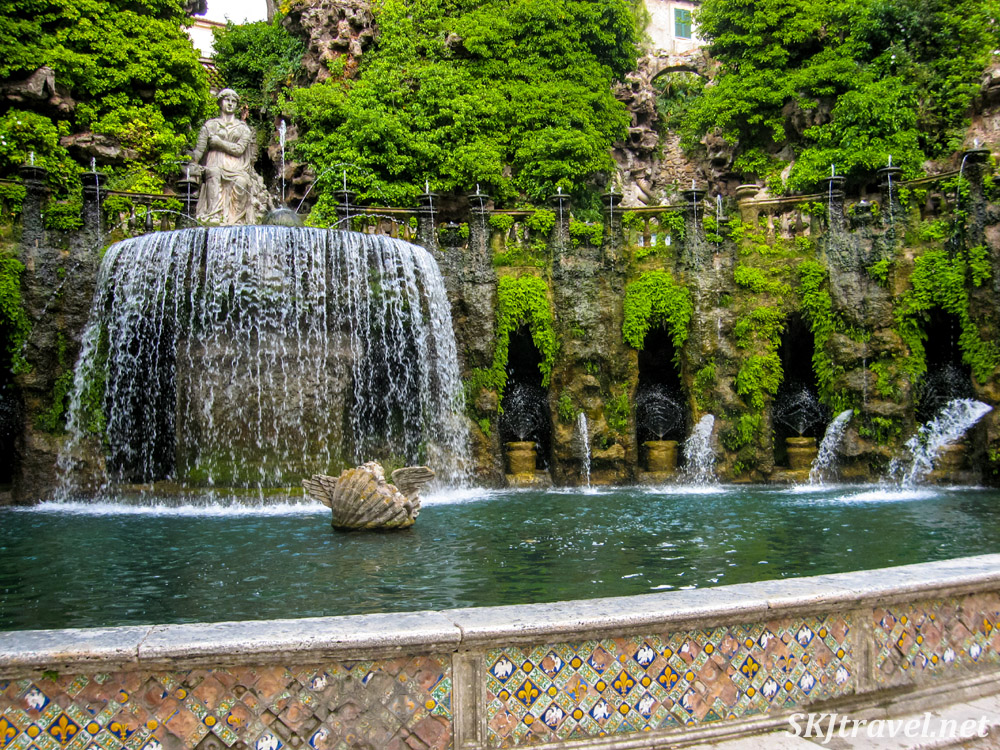 This is the Avenue of 100 Fountains. 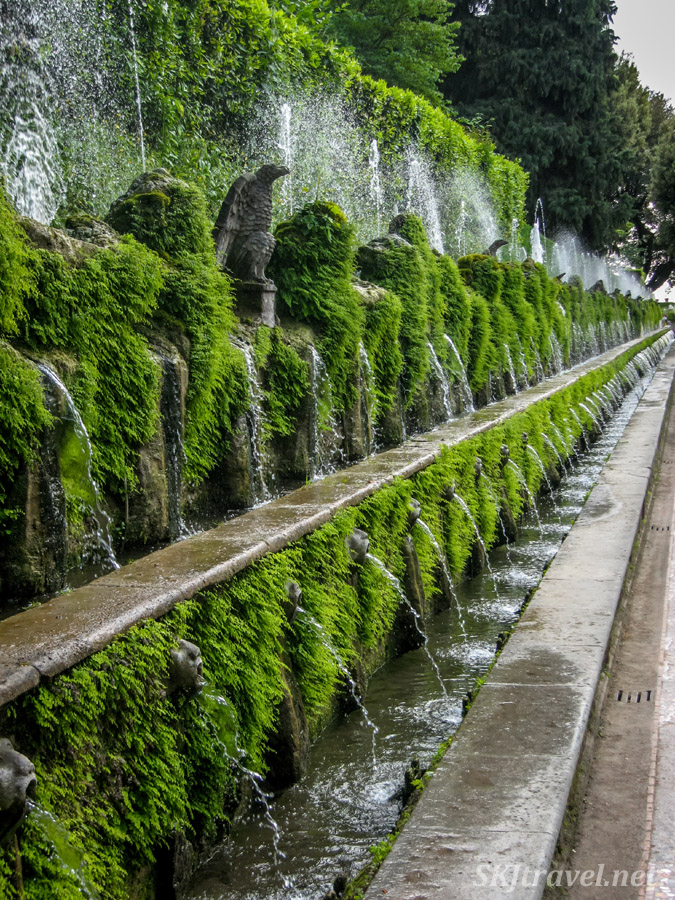 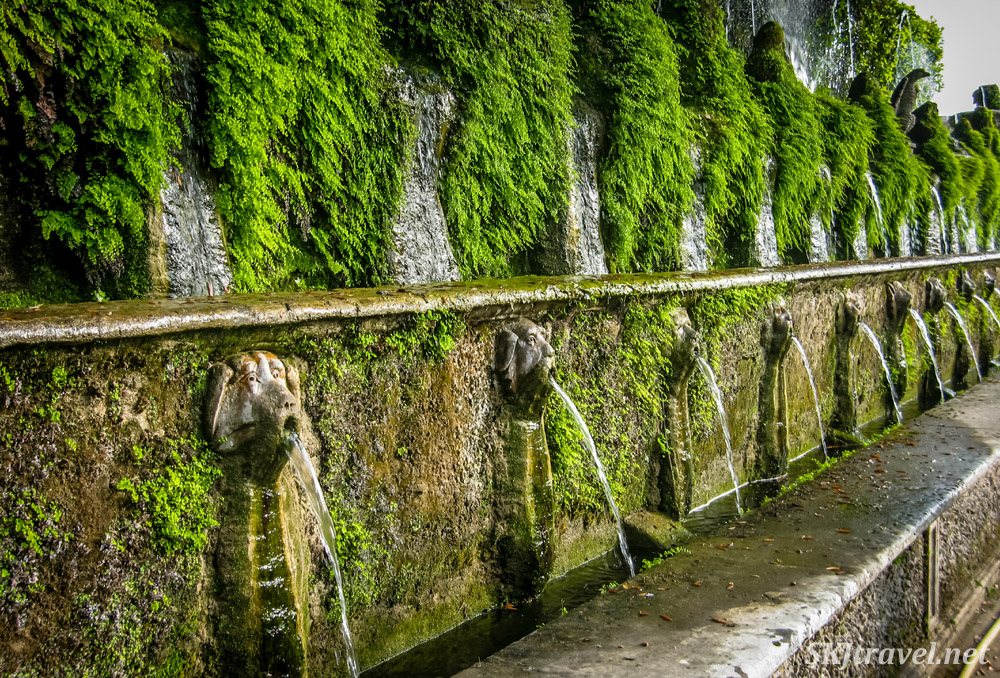 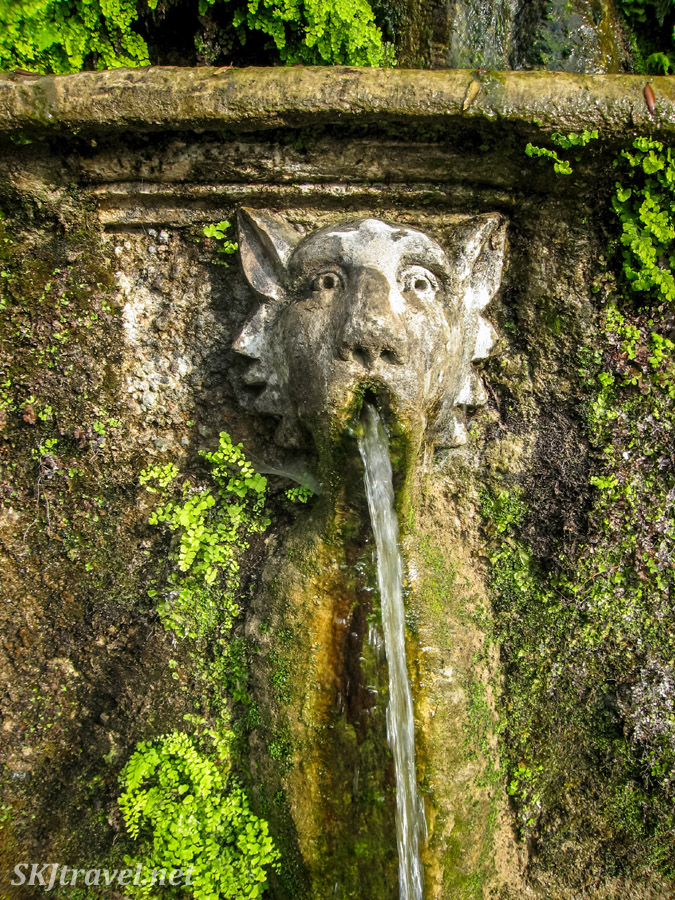 This is the water organ below. It's in the background of the subsequent two pictures, with the Fountain of Neptune in the foreground. 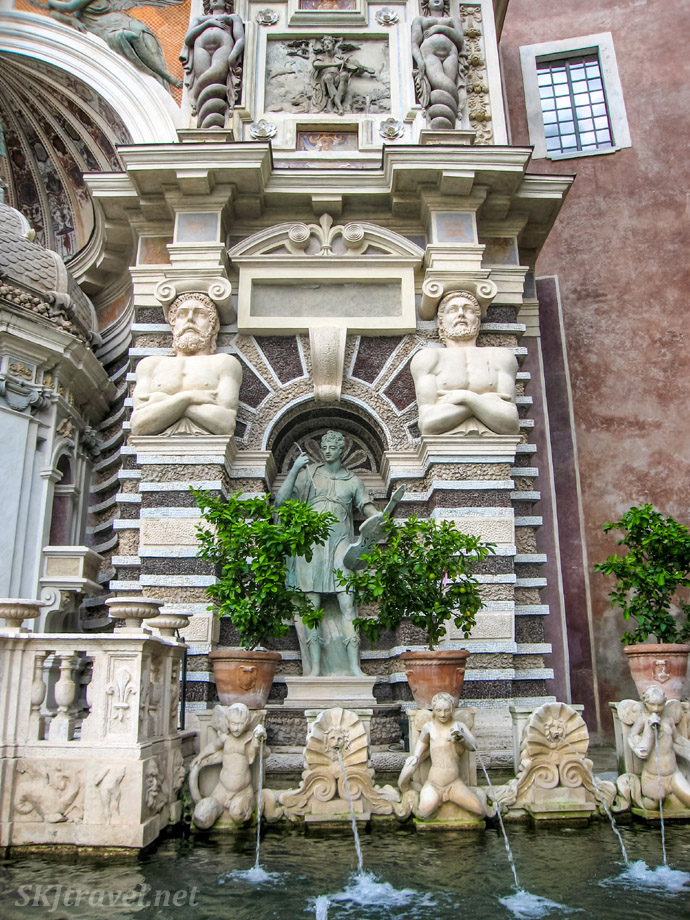 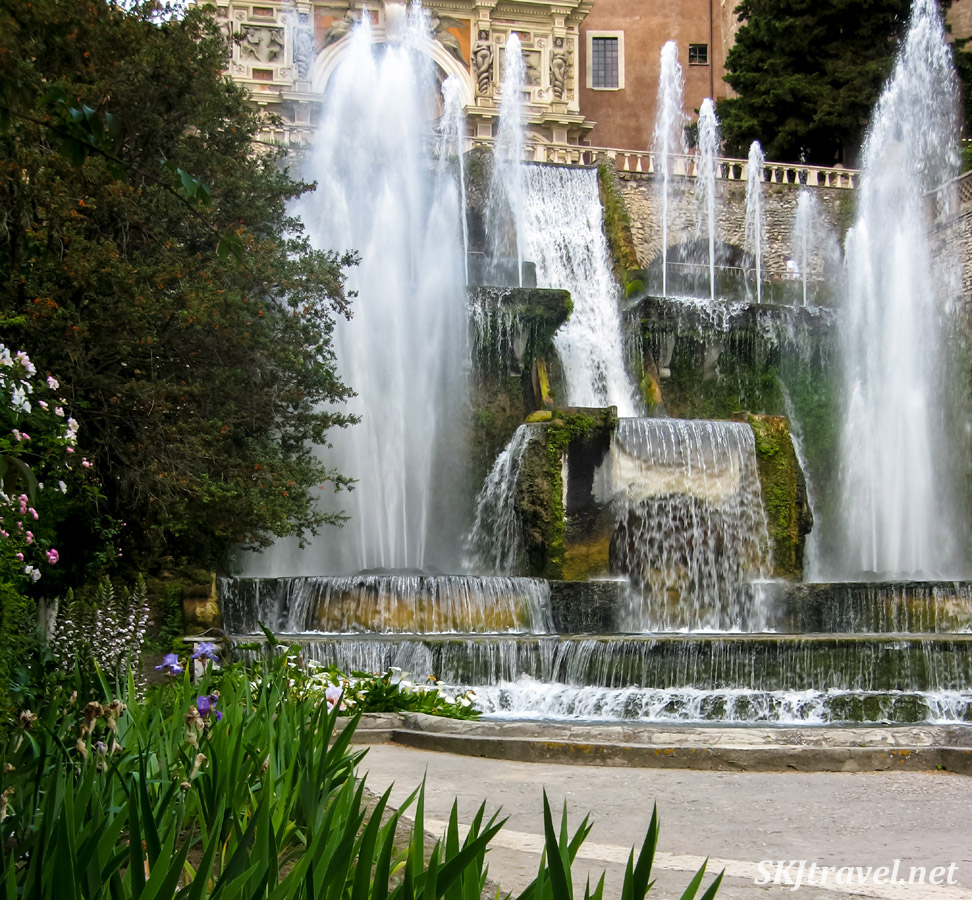 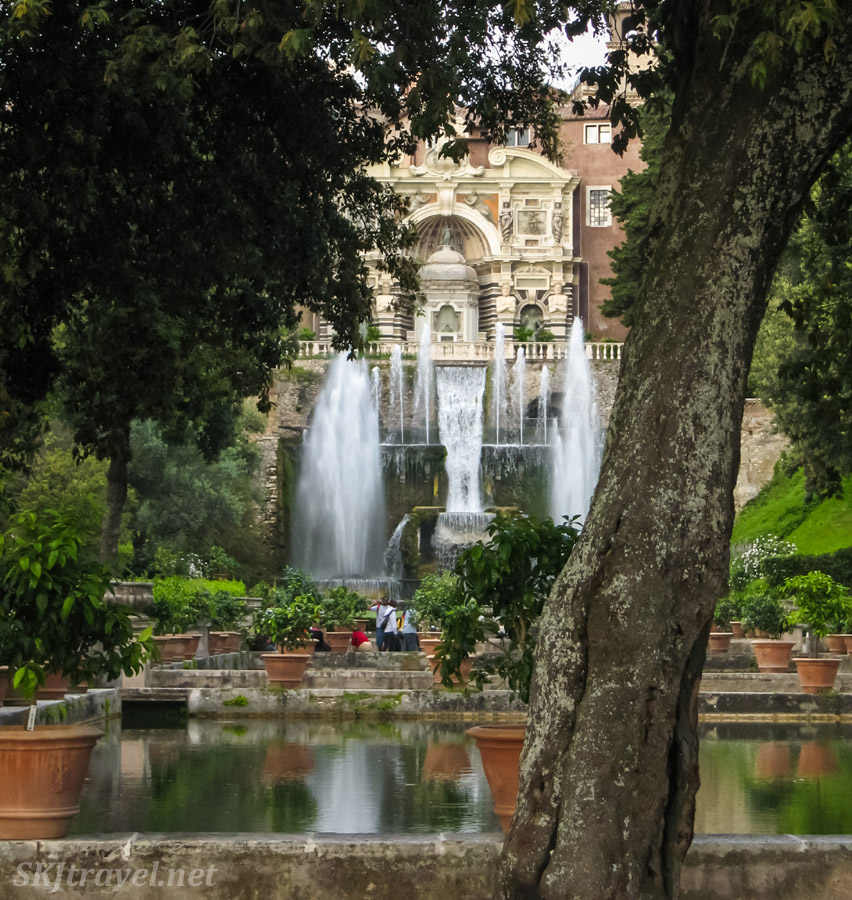 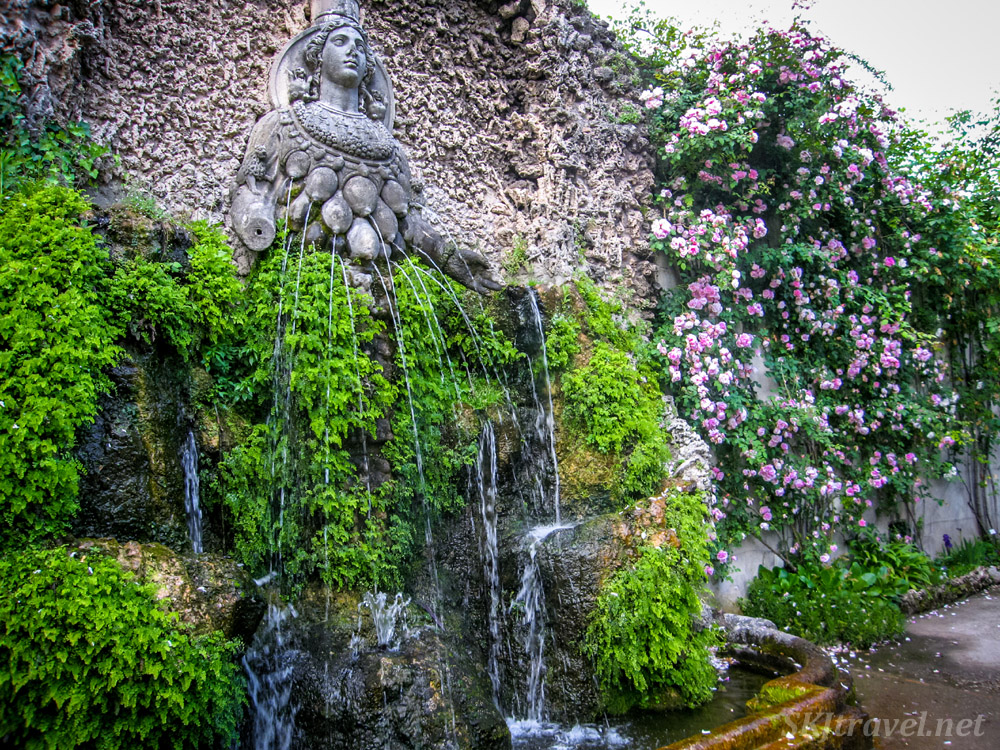 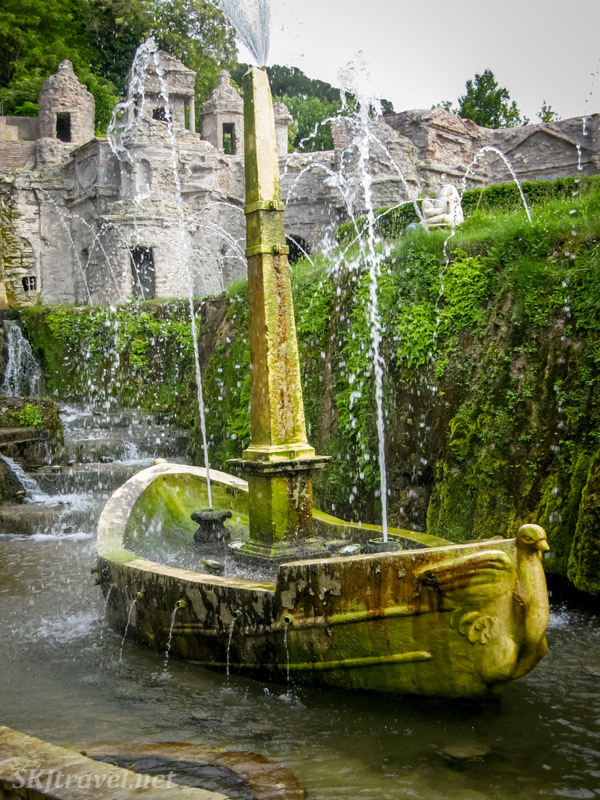 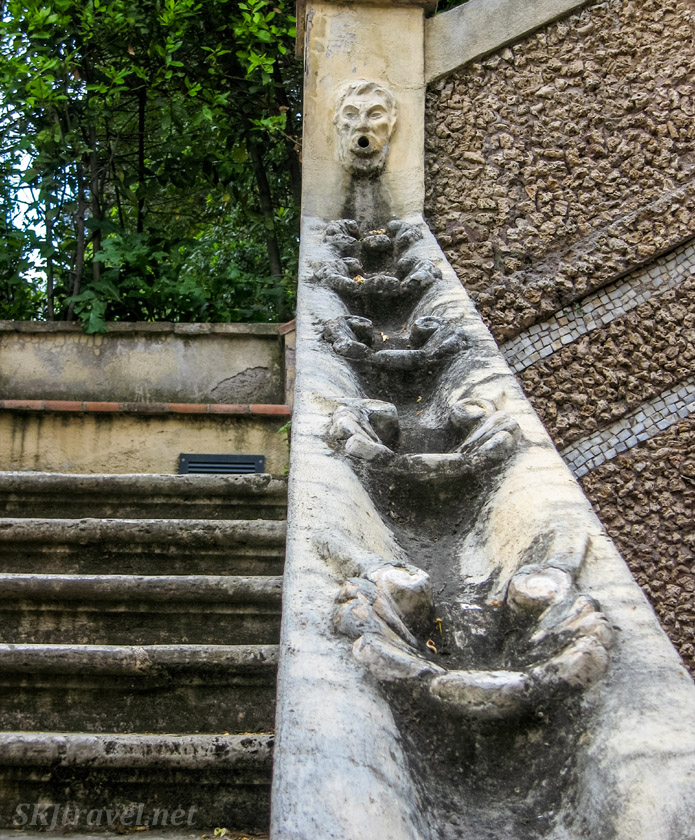 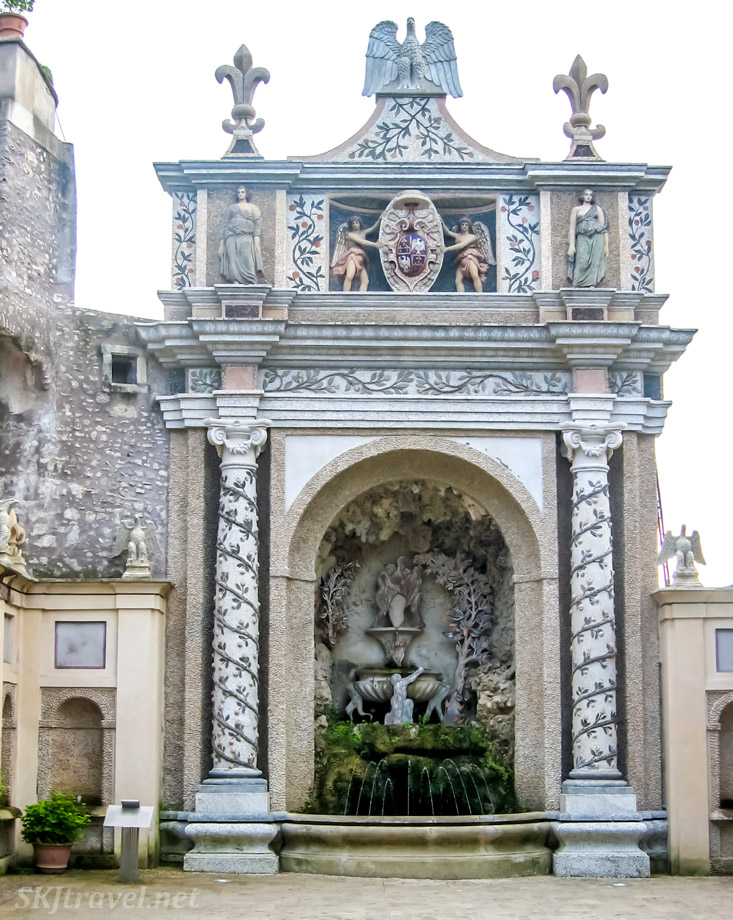 Just a short distance from Villa D'Este is Villa Adriana, which was a complex built by the Roman Emperor Hadrian. It's also a UNESCO World Heritage Site. It'd almost be silly to visit only one of these places and not the other, they are so proximate to one another. Of this villa, UNESCO says, "is an exceptional complex of classical buildings created in the 2nd century A.D. by the Roman emperor Hadrian. It combines the best elements of the architectural heritage of Egypt, Greece and Rome in the form of an 'ideal city'." This was the emperor's "retreat" from Rome. Just a wee bit opulent for the equivalent of one's country estate. But Hadrian was known to have a particular interest in art and architecture. (His name is probably most associated with "Hadrian's Wall" in northern England.)

This is his "maritime theater," sort of a villa within a villa, as the structures within were surrounded by a moat. This island villa apparently had two wood bridges across the moat, but they could be removed, rendering the emperor inaccessible when he wanted some "me time." 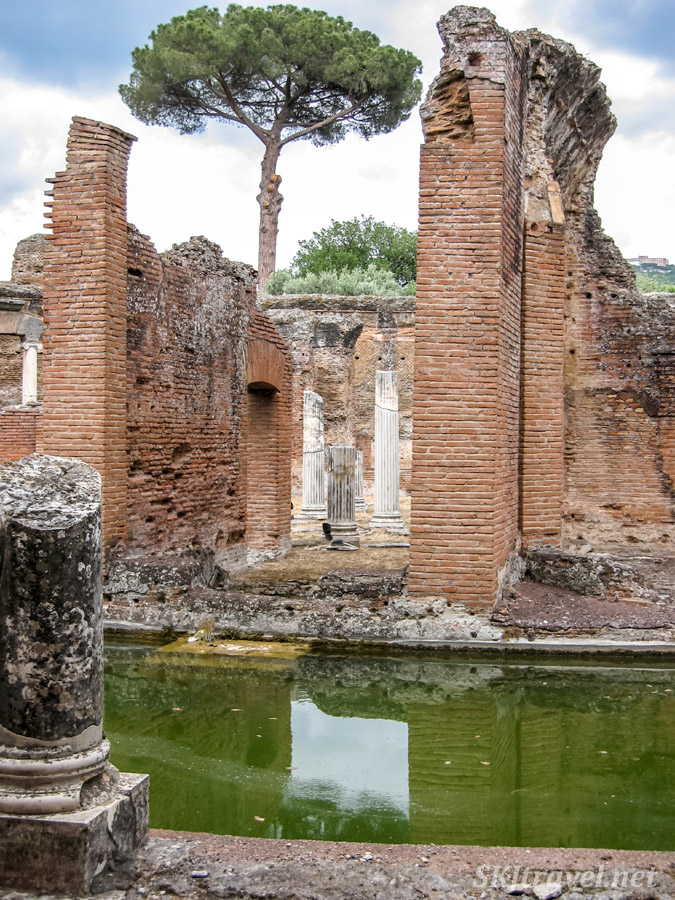 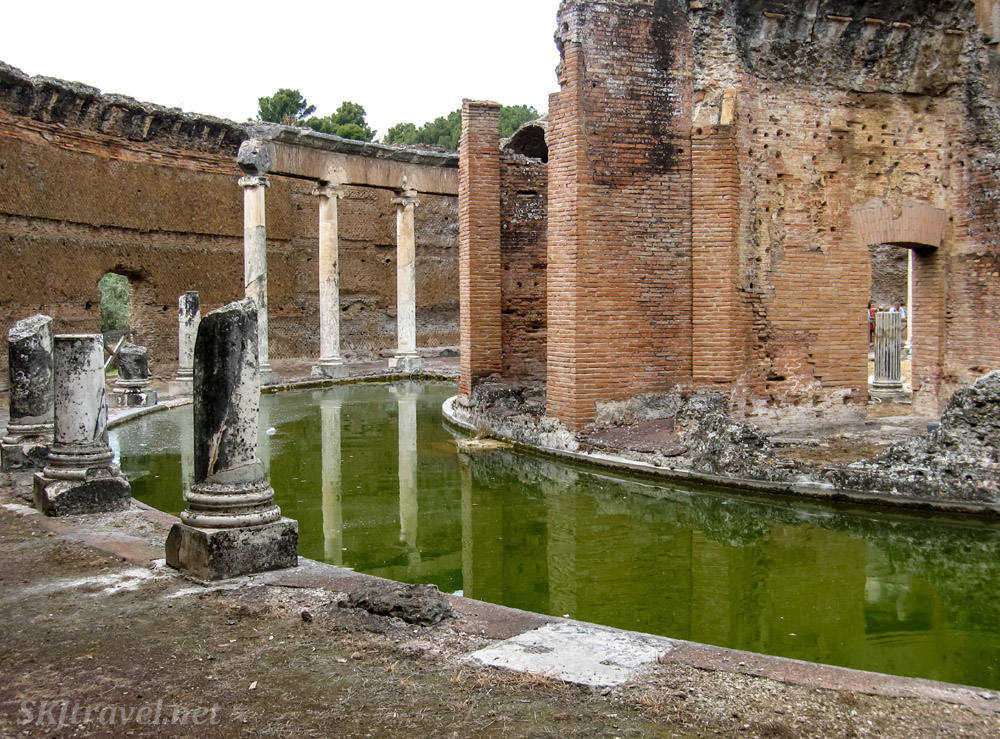 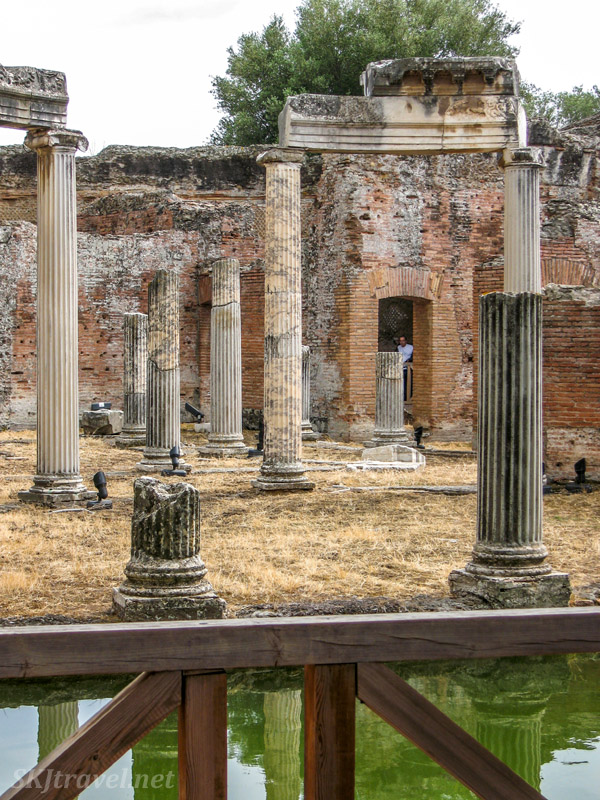 I think it's really cool to find the floor tile mosaics still in place in ancient structures. For me, this particular feature breathes life into a ruin — I can see the people milling about on the crafted floor with their leather sandals and boots. The best ones we've ever seen in situ are in Tunisia. (have a look at them HERE, scroll down to the second location, Bulla Regia) 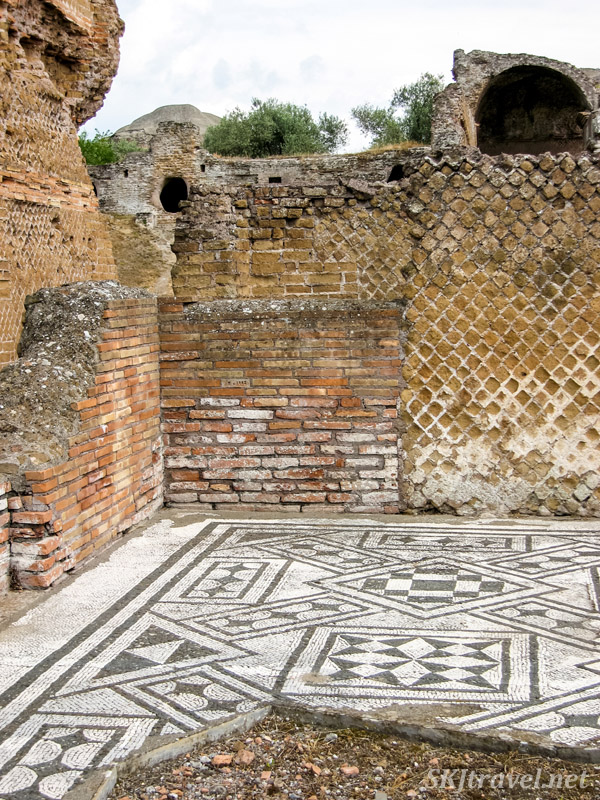 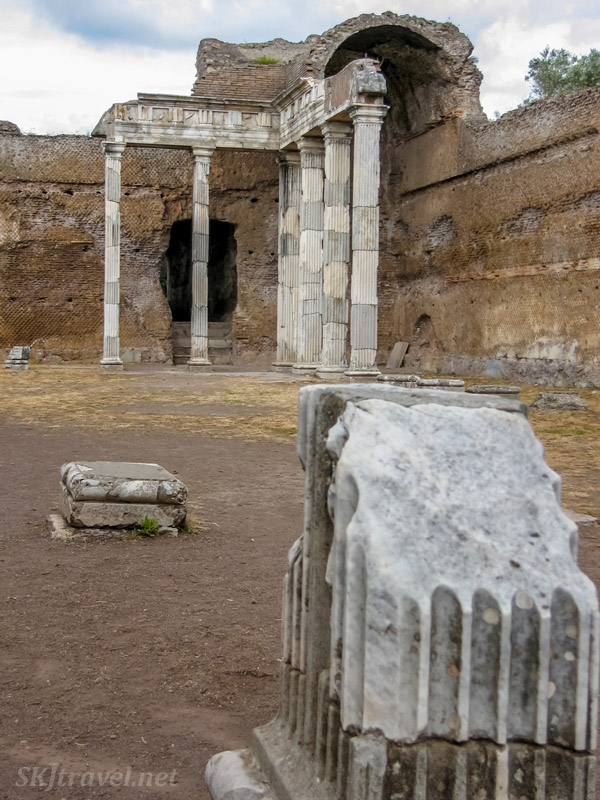 Known as the "Canopus," this pool is named after an ancient city in Egypt and represents an arm of the Nile River which Hadrian visited in 130 AD. It was used for summer banquets and renowned for its nighttime parties. But what emperor didn't throw great nighttime parties? At least that's the image we tend to have of their excessive behaviors. 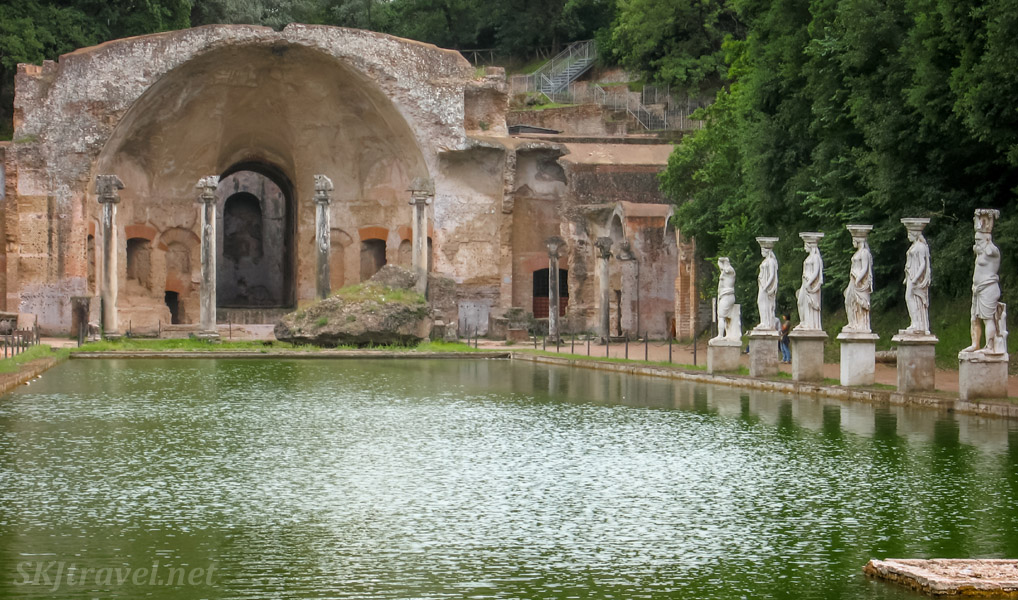 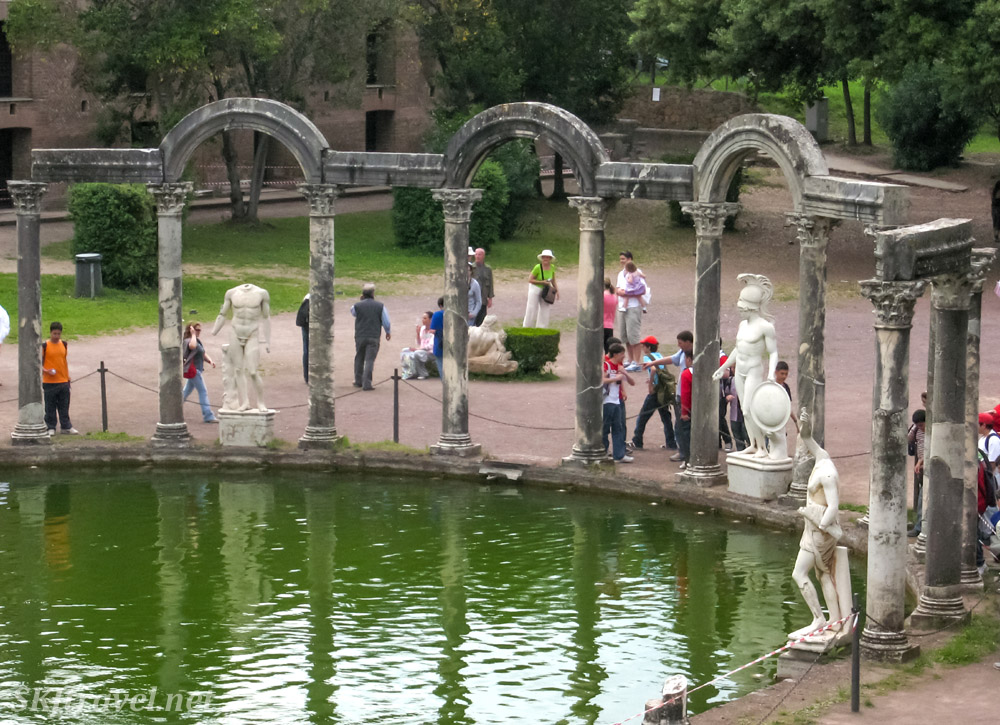 There is another famous villa in Tivoli, Gregoriana, which we did not have time to visit. It was tough to fit three sites into visiting hours, having come to Tivoli via public transportation. But after we completed villas D'Este and Adriana, we did have time for an early evening dinner in Tivoli. Here is where one of the more amusing foibles of our travels took place. We were aware of "grappa" liquor and "limoncello," and when the waiter brought a bottle of each for our after-dinner digestif, we weren't quite well enough aware of the nature of limoncello and had the mistaken idea that it was a non-alcoholic mixer to go with the otherwise rather stiff grappa. So there we were — my mom, aunt, husband and I — pouring limoncello into our grappa and thinking, "Oh, this still tastes very alcoholic, must need more limoncello." So we kept dumping limoncello into our grappa; I'm sure the waiter had a either a good laugh or a lot of confusion at our behavior. As Erik and I are typically rent-a-car-to-get-around people, it was one of the few days in our travels that it was a good thing we had taken public transportation, having polished off quite a lot of booze.

Having no association with the sites at Tivoli, I jump randomly to the Tuscan hilltop walled village of Volterra (which, incidentally, Rick Steves has suggested is the most underrated hill town in Italy). Unfortunately we didn't have much time to spend there. As a fan of ancient history and archaeology, I wanted specifically to see the Etruscan museum, so we pretty much beelined there and finished up near closing time. Wandered a little through the piazza and had a delicious dinner, at which we learned that it is a profound faux pas to ask for any beef product to be cooked beyond "medium."

The Etruscans preceded the Romans (and as you may have guessed, the region of Tuscany is named for them), at their height in the 8th through 3rd centuries BC. While I'm prone to including history "lessons" in a lot of my posts, I'll spare you a long discourse to go with these few photos. But if you're interested to know more about this civilization, the page at WorldHistory has a nice roundup.

The Guarnacci Museum was established in the mid-1700s. I actually had no idea museums were a thing so long ago, haha. But indeed it was an ancient civilization at that time and artifacts abounded in the area. This museum is particularly famous for its collection of funerary urns, quite unique to the Etruscan culture, many carved from alabaster and iconic of Etruscan craftsmanship. They were re-used in the Middle Ages, then gathered and used as decor and construction materials during the Renaissance (decor! haha, I guess there was no sense of the sacred then) and eventually re-discovered in the 18th century. And here are a few of the nearly 600 urns collected at the museum from the Volterra area: 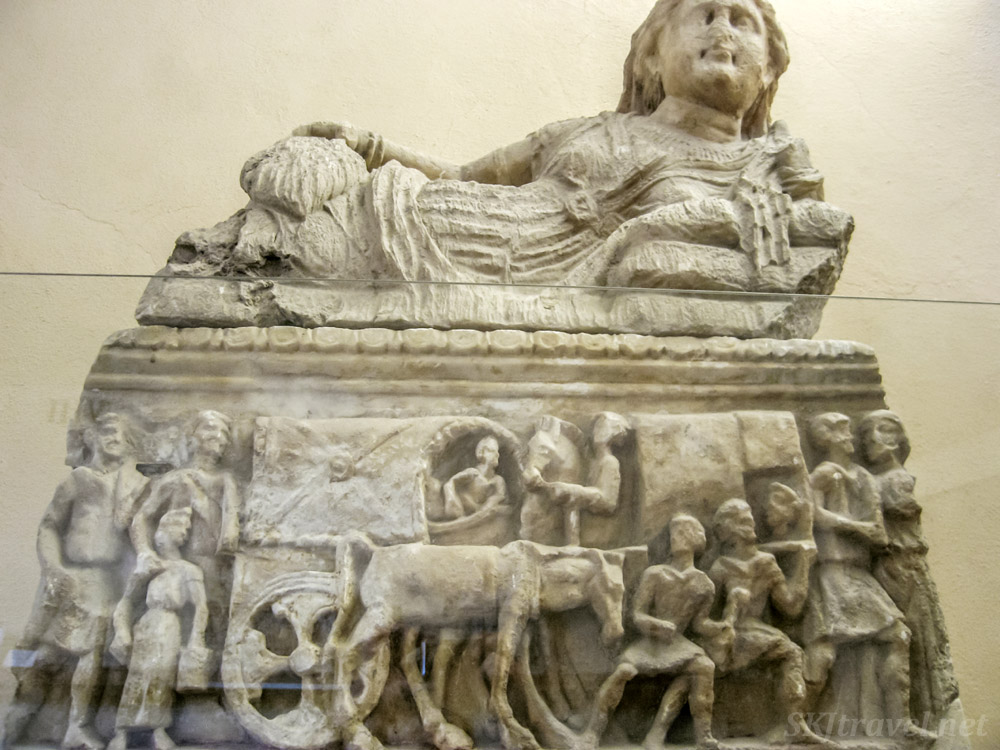 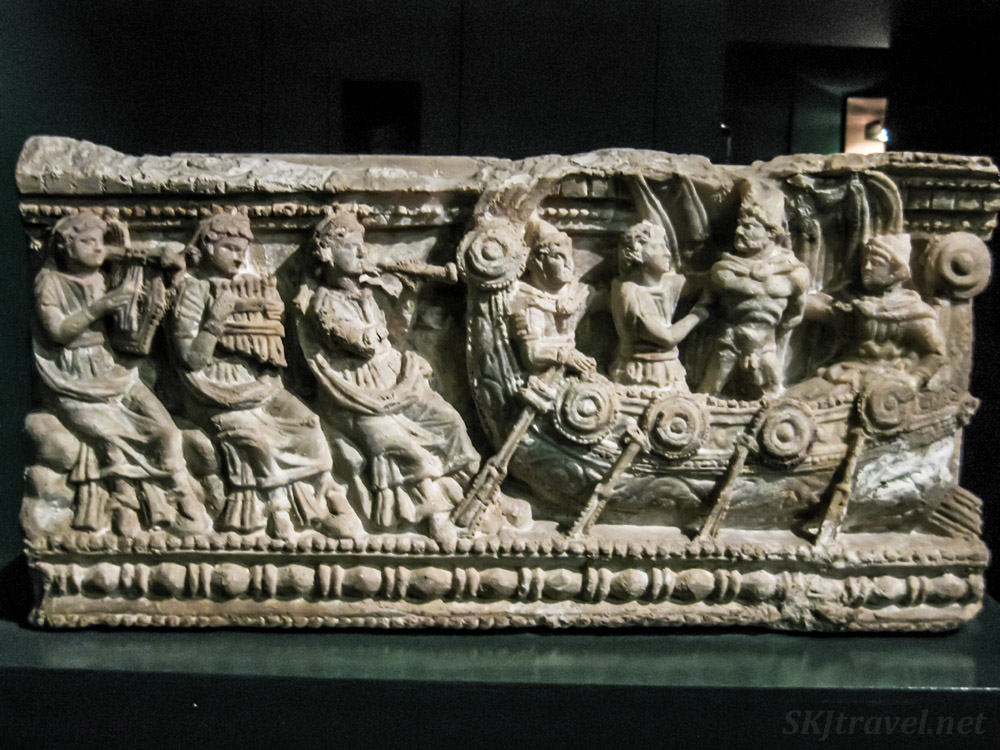 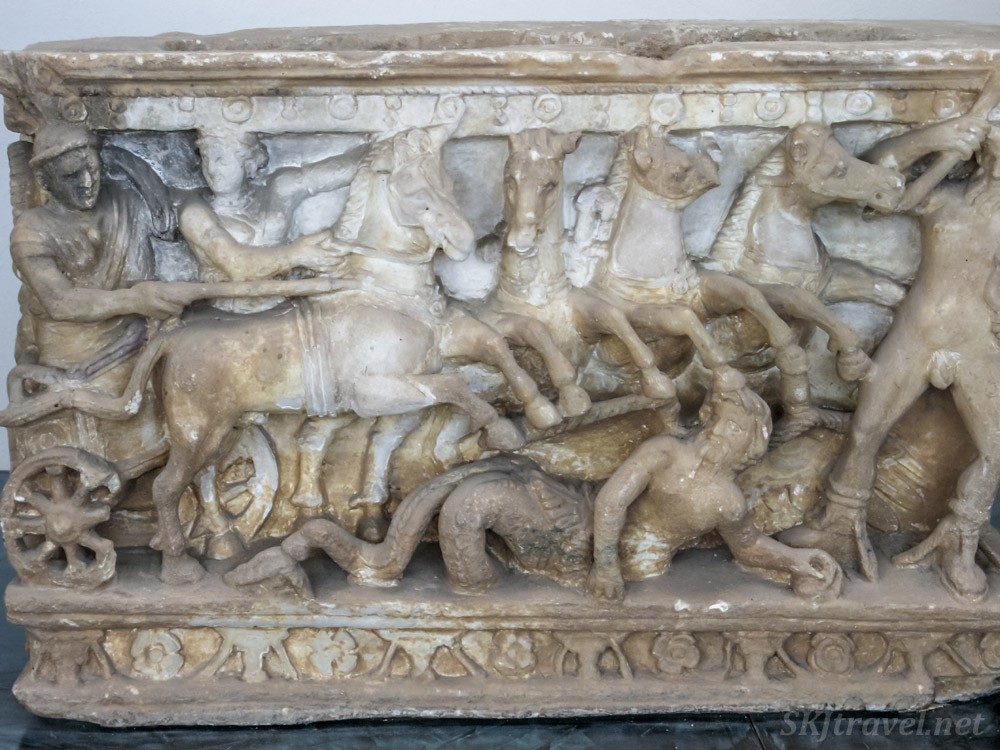 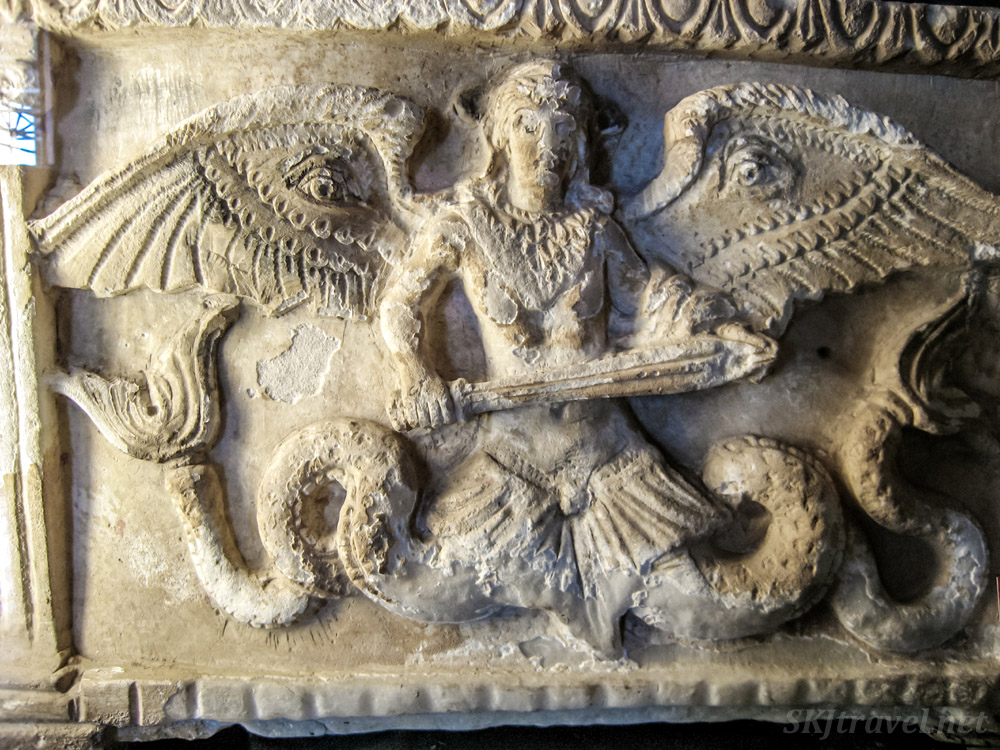 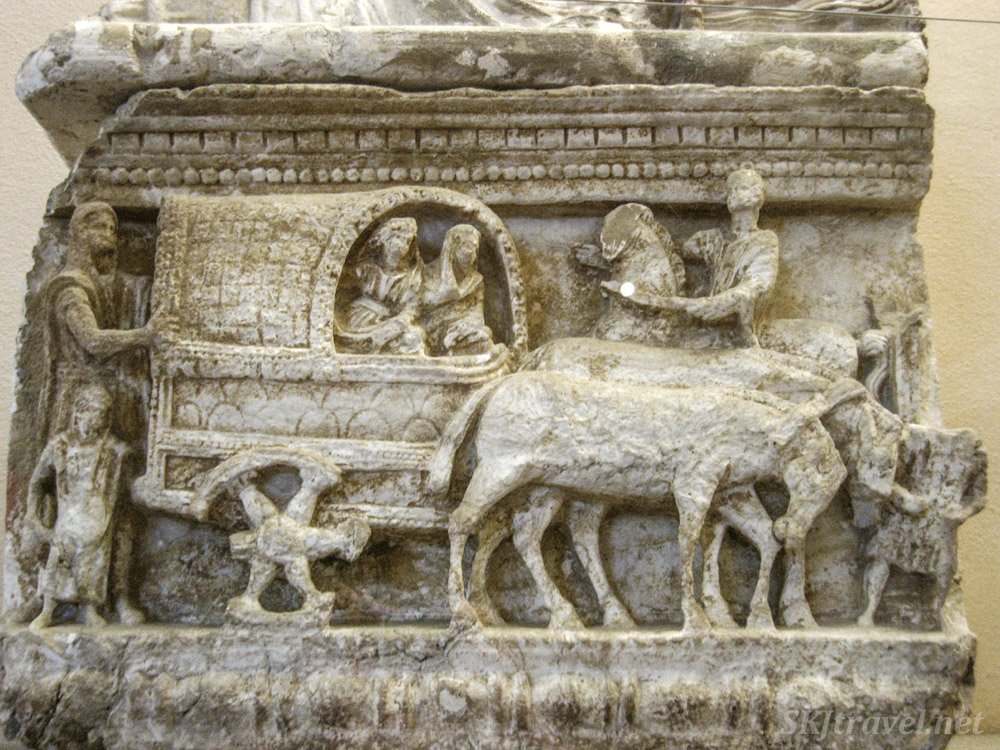 A fine example of a walled hilltop town! Driving through Tuscany gives you a sense of its history so easily, with so much of it contained in these little nodules plopped along the hilltops, such discreet packets of architecture and history; at one time many of them were their own mini kingdoms as city-states. I think it's one of the most alluring aspects of the Tuscan region. 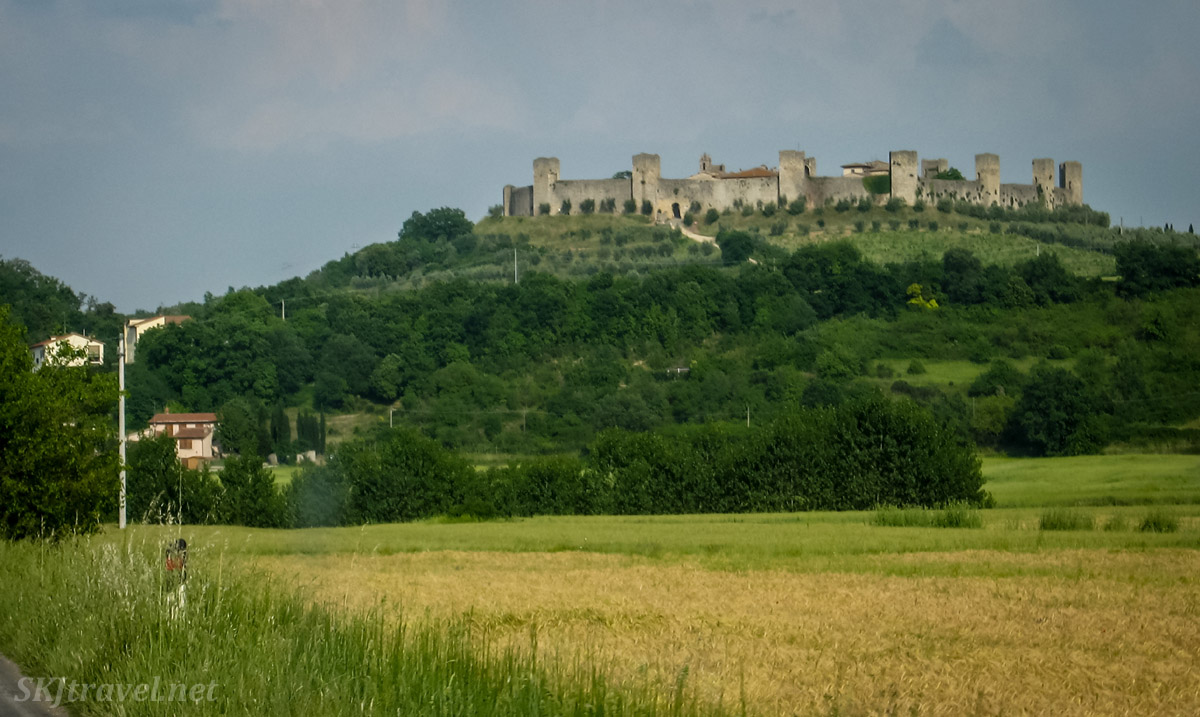