After the high we experienced kayaking at Brown Bluff, Sixto told us it only got better. We of little faith had a hard time believing this. But our next kayaking adventure at Cuverville Island was a whole new level of special. (pardon the photo titles which say Orne Harbour ... a mistake on my part that's too much effort to fix; it's Cuverville Island) Any and every adjective I've used previously to describe a landscape in my travels falls limp now when I think of employing it for this little expedition. It's like whispering a word to someone at the other end of a football field. You technically said the word, but it fails to be properly received. I've pointed this out before, but again, different people are of course affected differently by landscapes or animals or architecture, etc., so some may think my tear ducts simply had a malfunction that day, a crack in the water line that caused them to leak. But no, it was genuinely an emotional landscape to me. What does that mean? An emotional landscape? I don't know what to say, really, except that it brought me to tears. The size, the uniqueness, the drama of such a jumble of icebergs in such fantastical shapes and sizes, the ephemeral nature of it all shifting, melting, moving even as we paddled among them. A starter list of adjectives that could be weakly applied: sublime, transcendental, dramatic, magical, surreal, trippy, astounding, glorious, staggering, breathtaking, and the overused word I hate to pull out but is actually aptly applied here: epic.

I've never met a landscape so wholly incapable of being reasonably represented in photos. On the one hand it's disappointing because I can't properly share that drama and feeling with others. On the other hand, that's part of what makes it so special, it's something that only can be properly appreciated first-hand. And I waited decades to get here and spent a massive amount of money (by my budget) to experience this as the crowning achievement in my one and only life goal -- to visit all seven continents. And it turned out to be not just any crown, but the most opulent, bejeweled crown I could imagine.

(Again, let me point out all photos taken while kayaking were with my point-and-shoot G9 camera with pretty much no idea what I was capturing until I downloaded the pics onto my computer -- extracting the camera from my life-jacket pocket, turning it on and focusing in bright light with clunky wet gloves while trying occasionally to actually help Erik paddle, I was pretty pleased with what came out blindly shooting. Imagine what one could do with a nice camera and lens. But we were cautioned not bring expensive equipment onto our kayaks.)

So with all that being said, let me start with some photos that include some points of reference for the scales of size and distance. We'll start with the small ice bergs that we paddled through. It was so cool to see what looked like a maze of icebergs ahead of us knowing that we would get to thread our way through them. 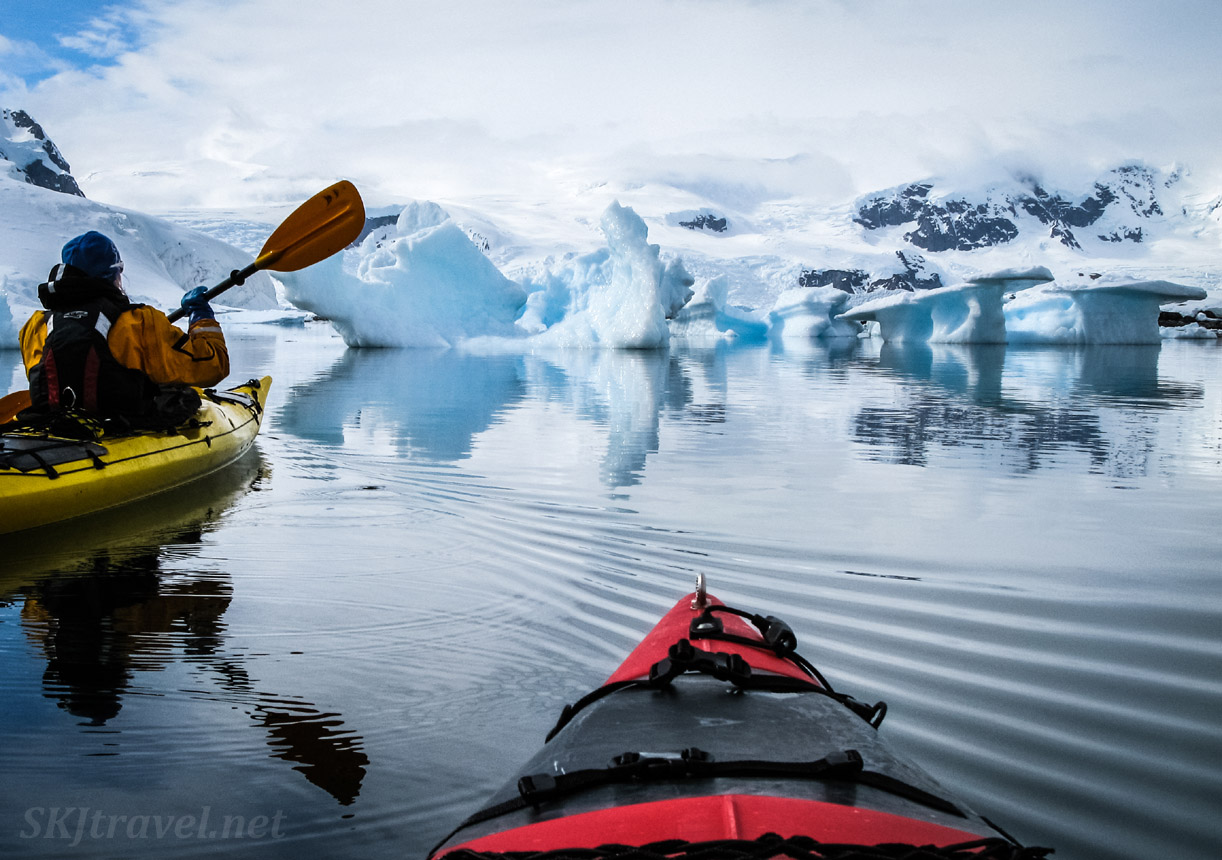 In these photos below, you can see other kayaks on either side of the ice bergs. Actually, the first one shows our support zodiac on the right. One of the three kayaking guides was always in a zodiac in case anybody needed rescued or got tired. The second pic you have to look pretty closely to pick out the two kayaks at the far edges of the picture on left and right. 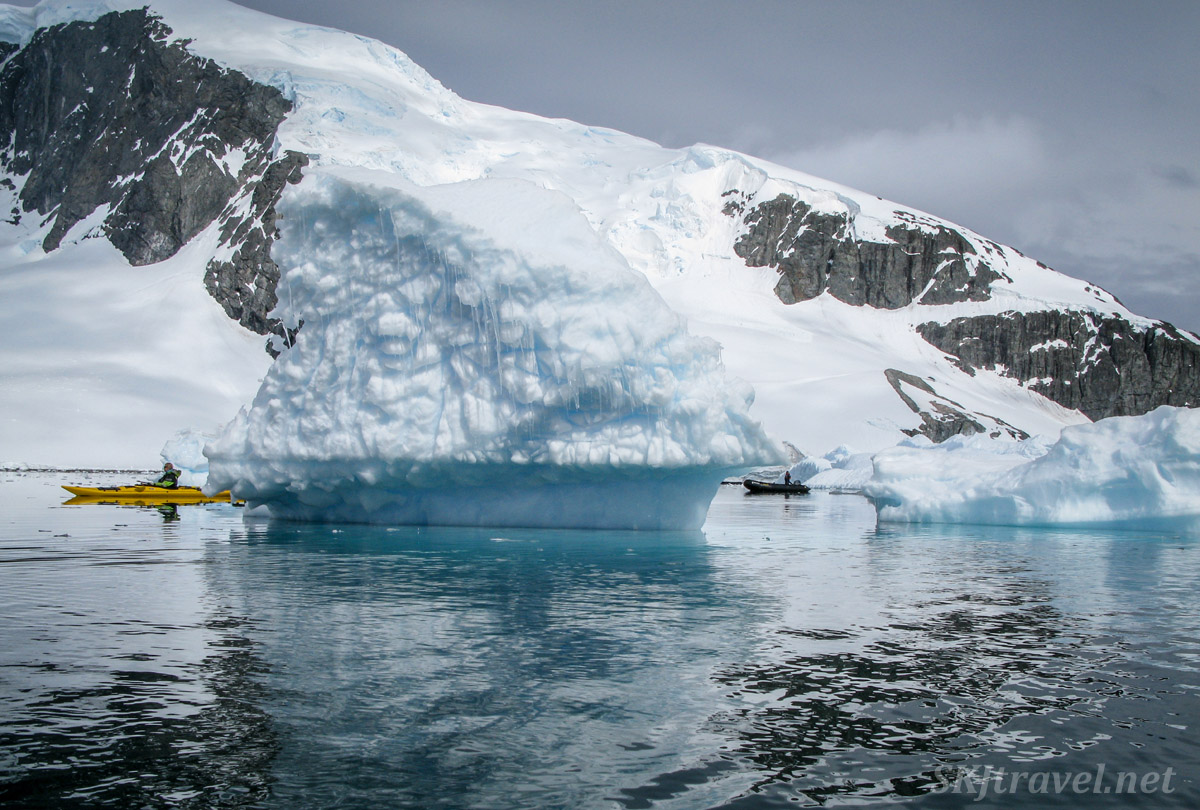 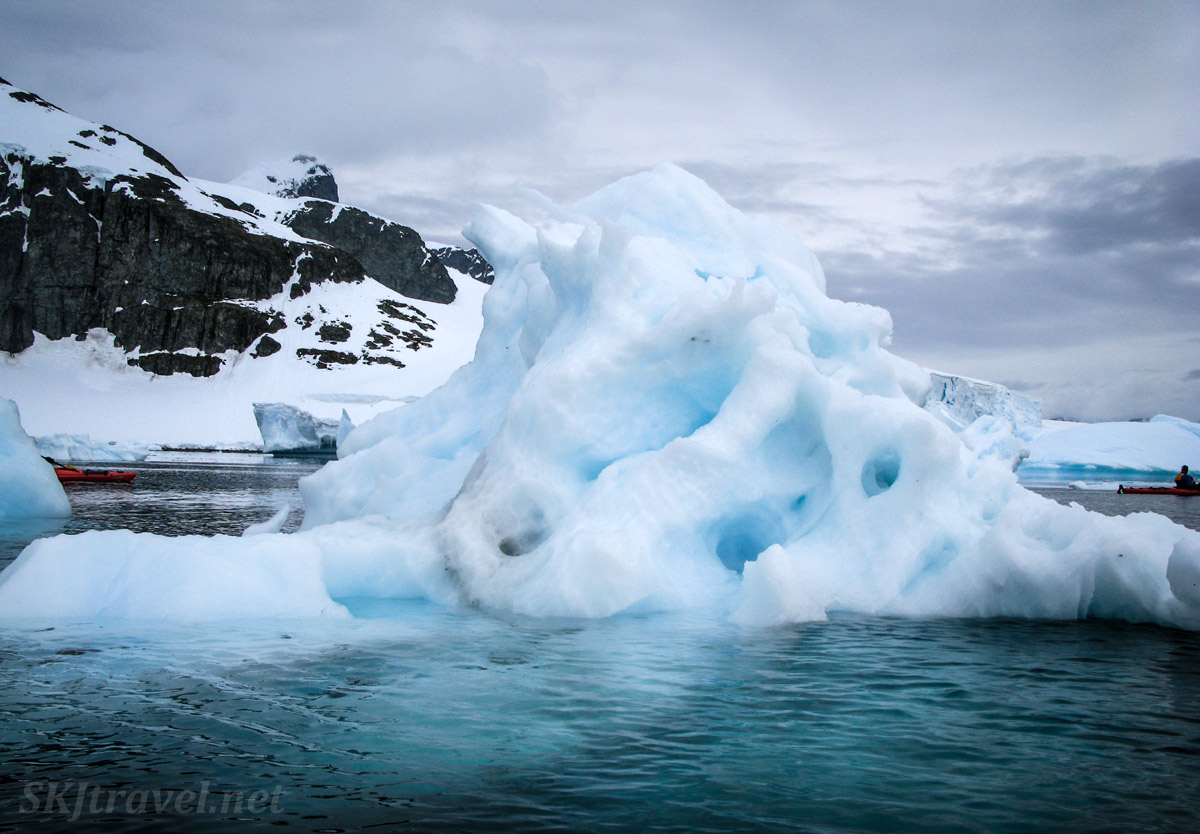 Here's a sampling of the kinds of random icebergs I got pictures of. I like the first one because of the two holes in it. Once again we had phenomenal weather and paddling conditions, with a dreamy calm sea which often lent itself to the magic of reflections. The darker colored water, almost black, makes the water around the icebergs, where they extend beneath the water's surface, a particularly greenish hue (as in above). 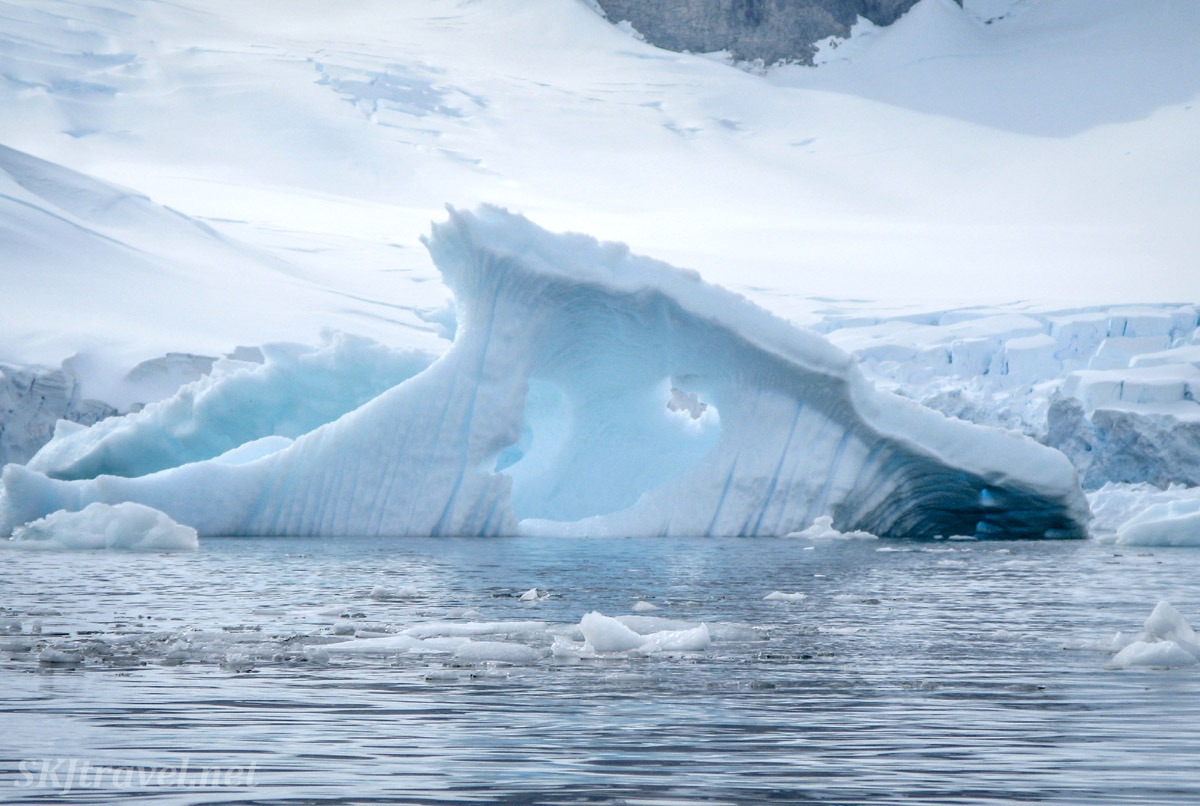 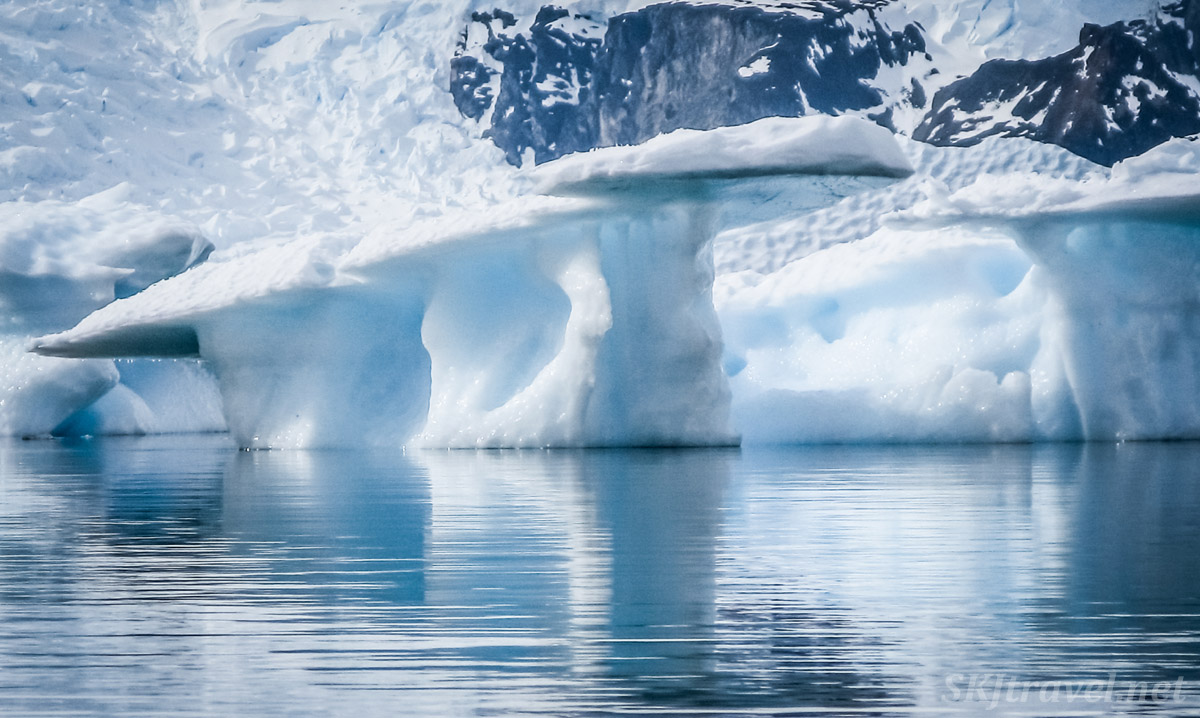 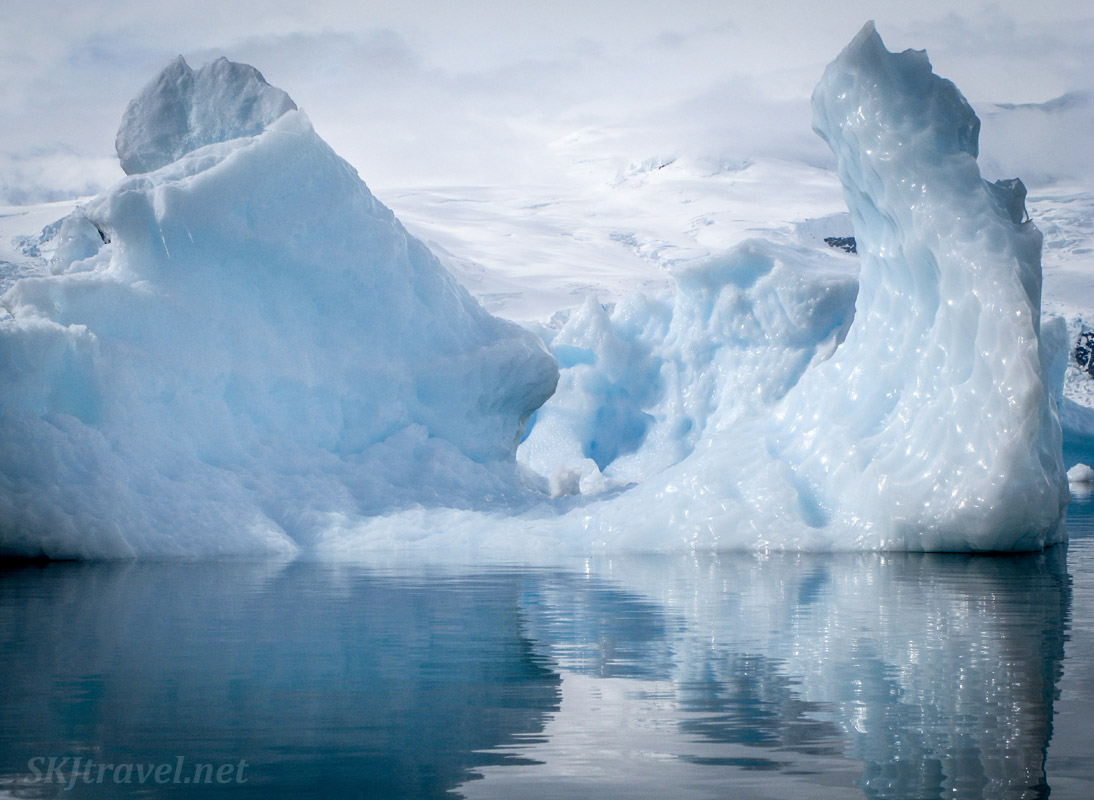 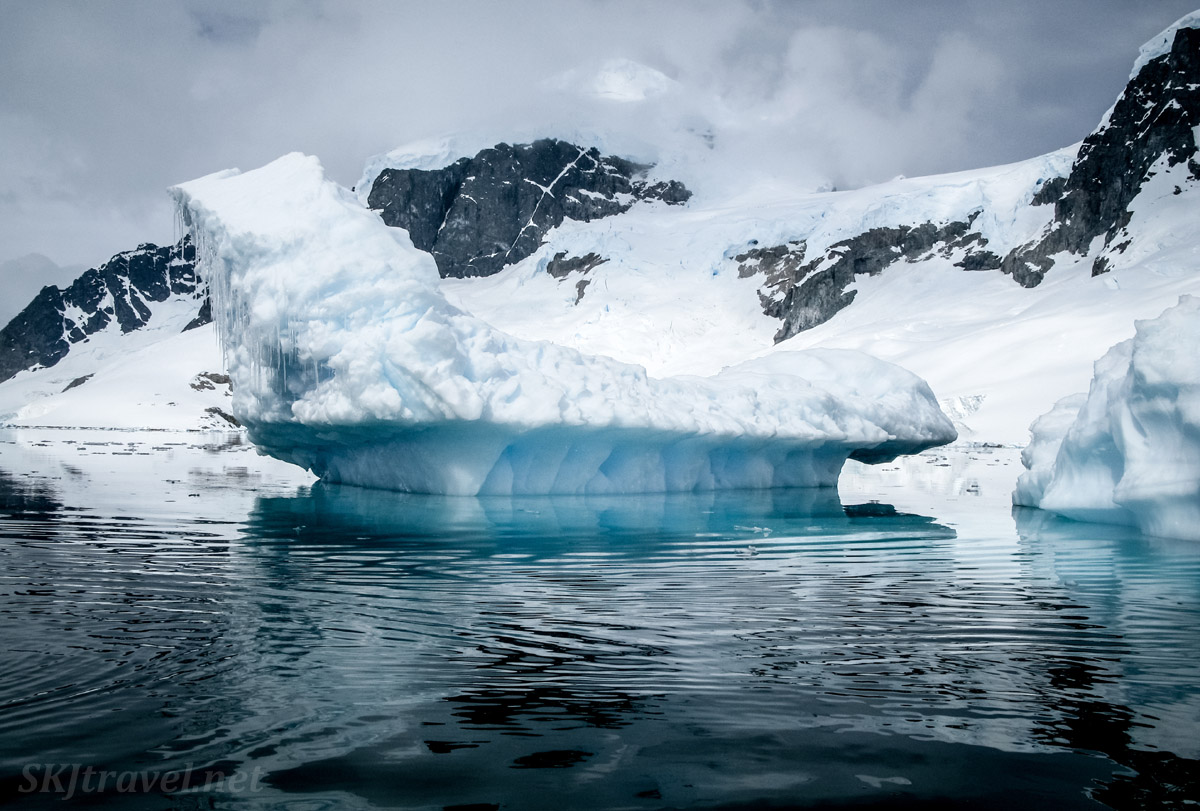 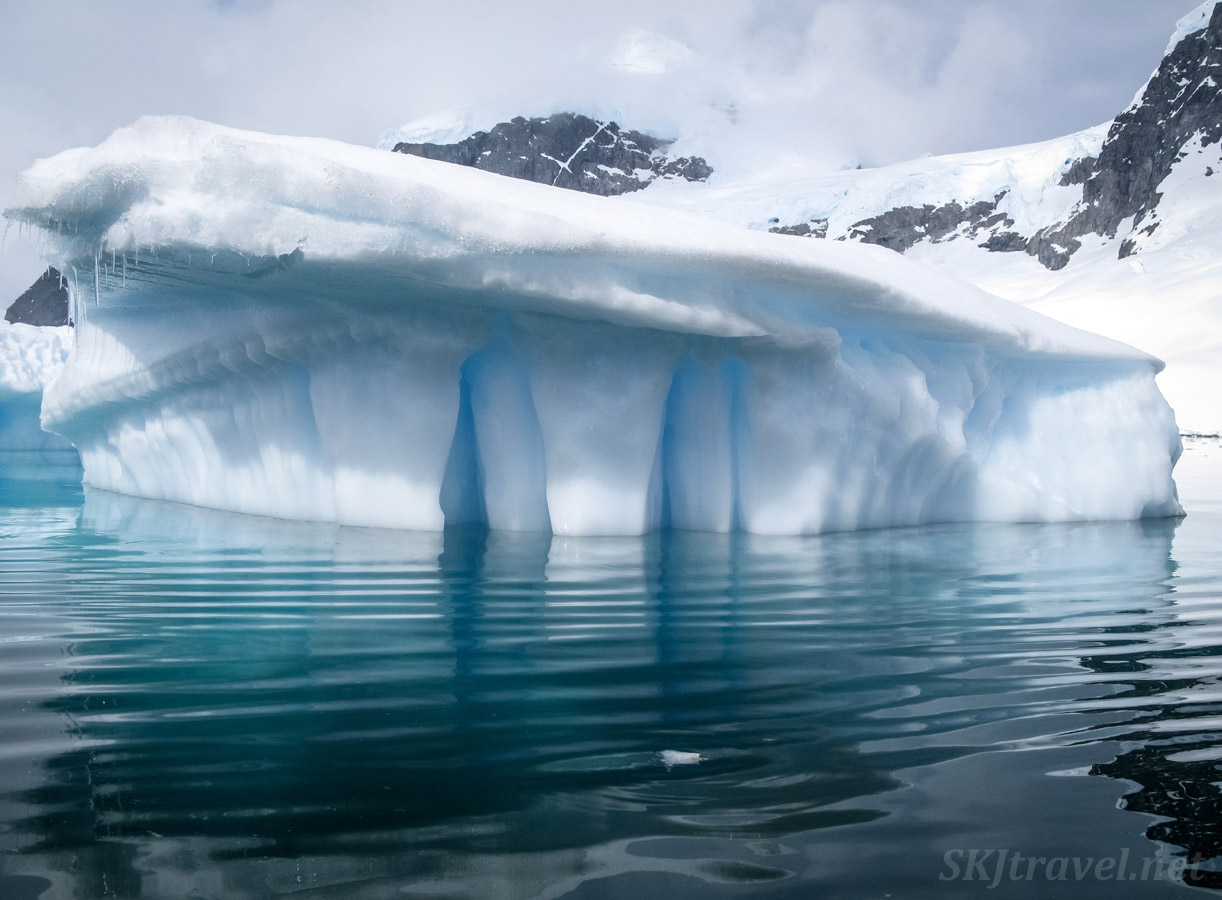 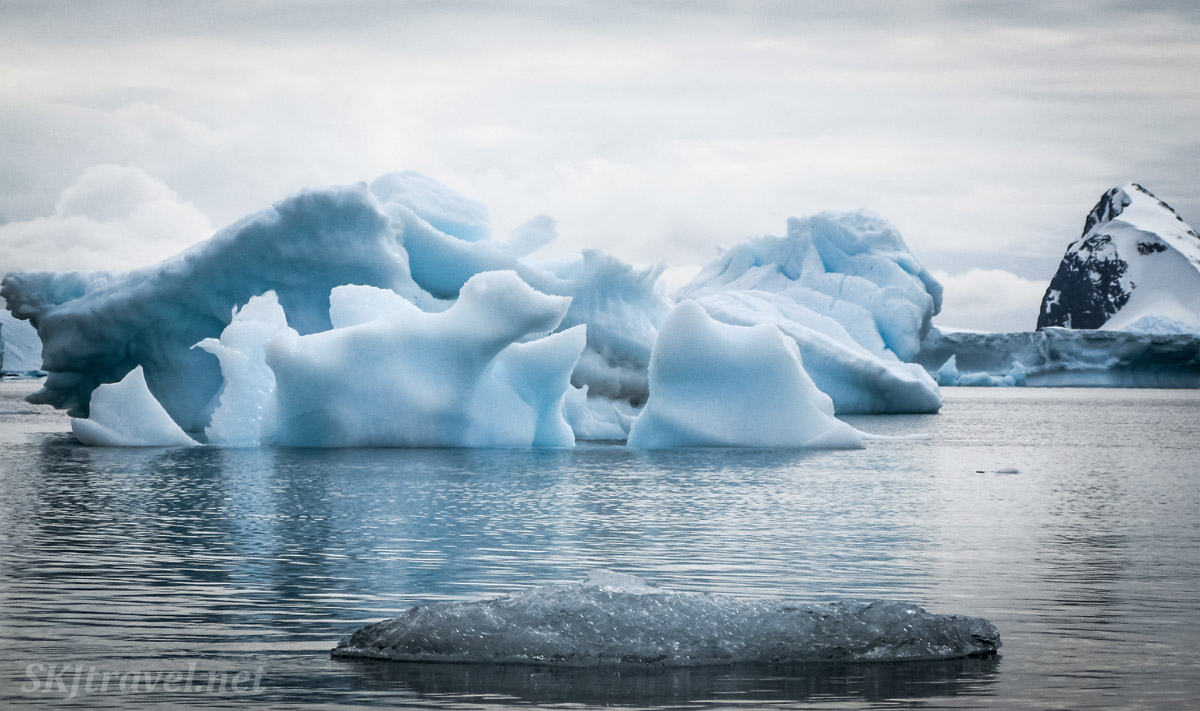 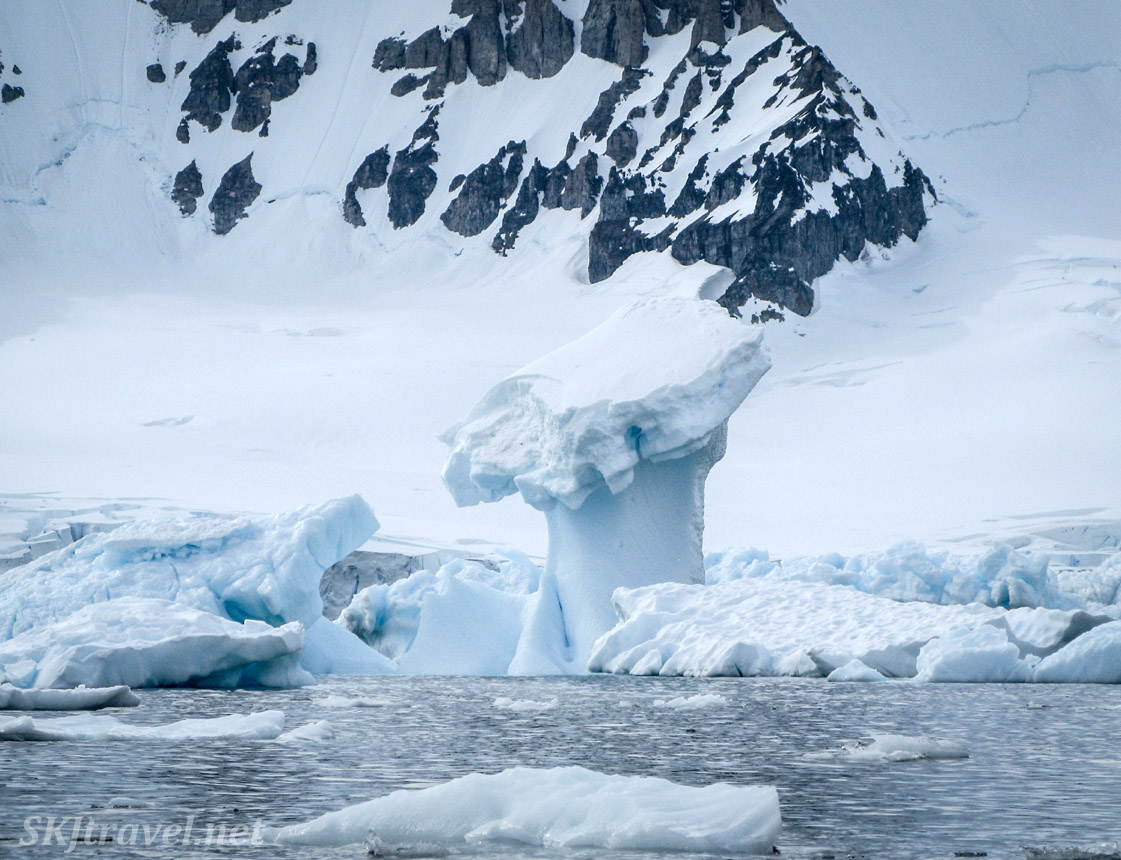 Although the day was overcast (and progressed steadily to more heavily overcast), there were still some lovely reflections to be had, as even diffused light is quite bright in the daytime. Here are some reflected landscapes as we paddled in more open water, and a few patches of blue sky. 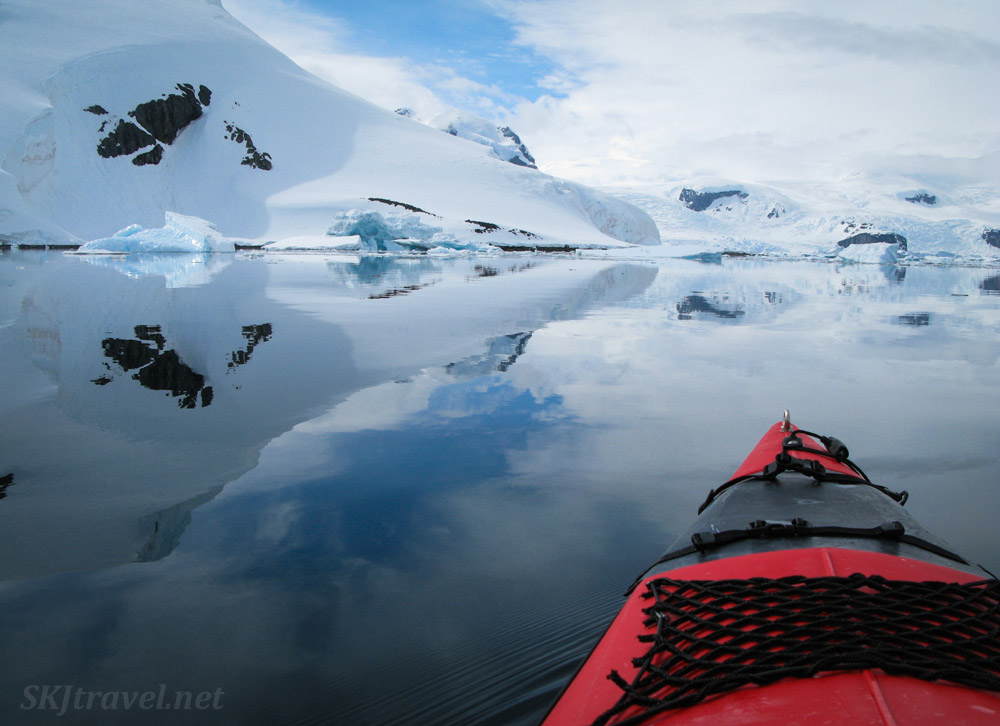 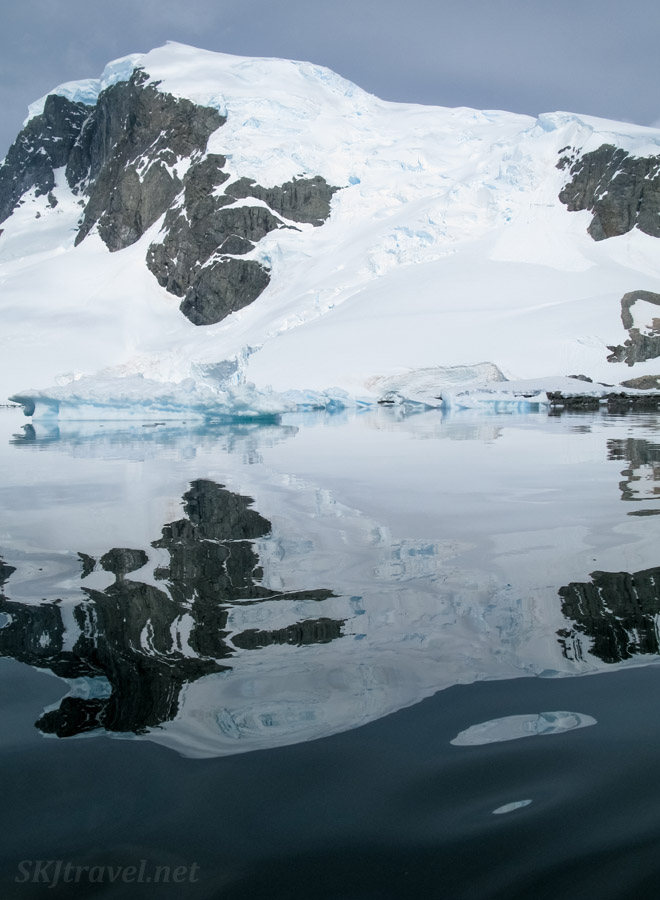 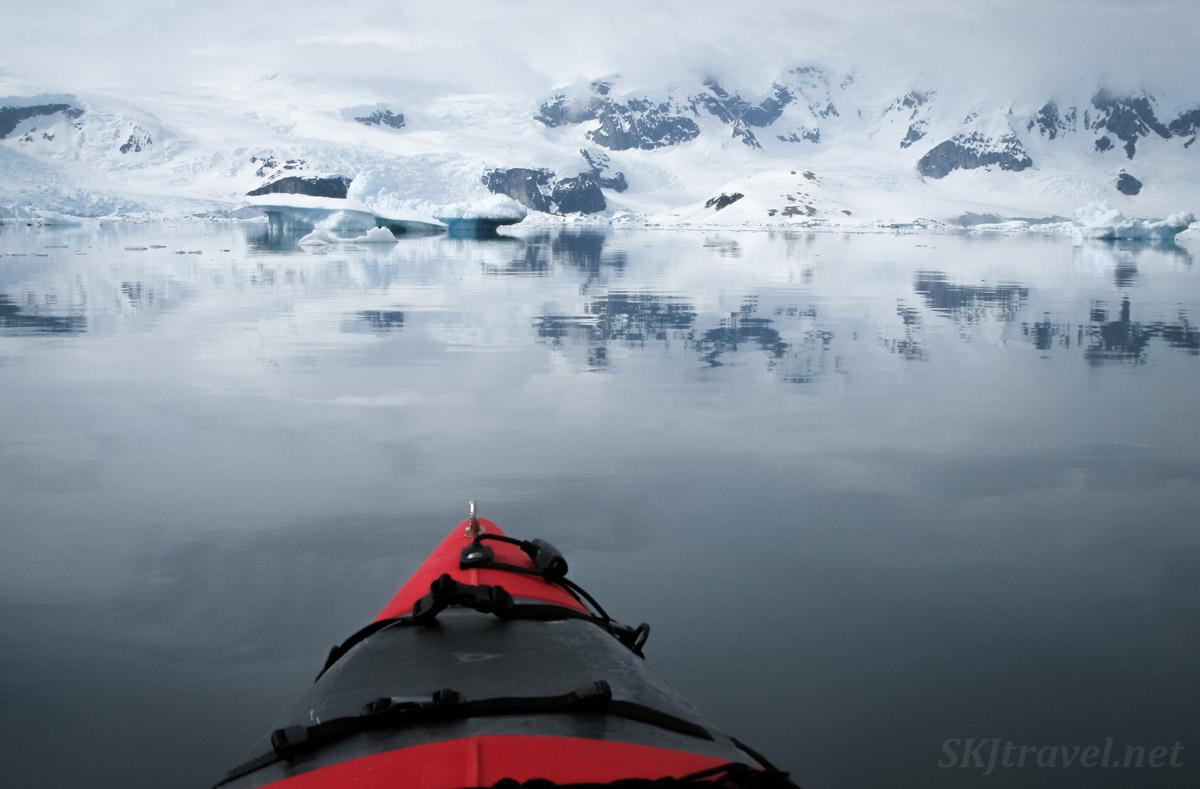 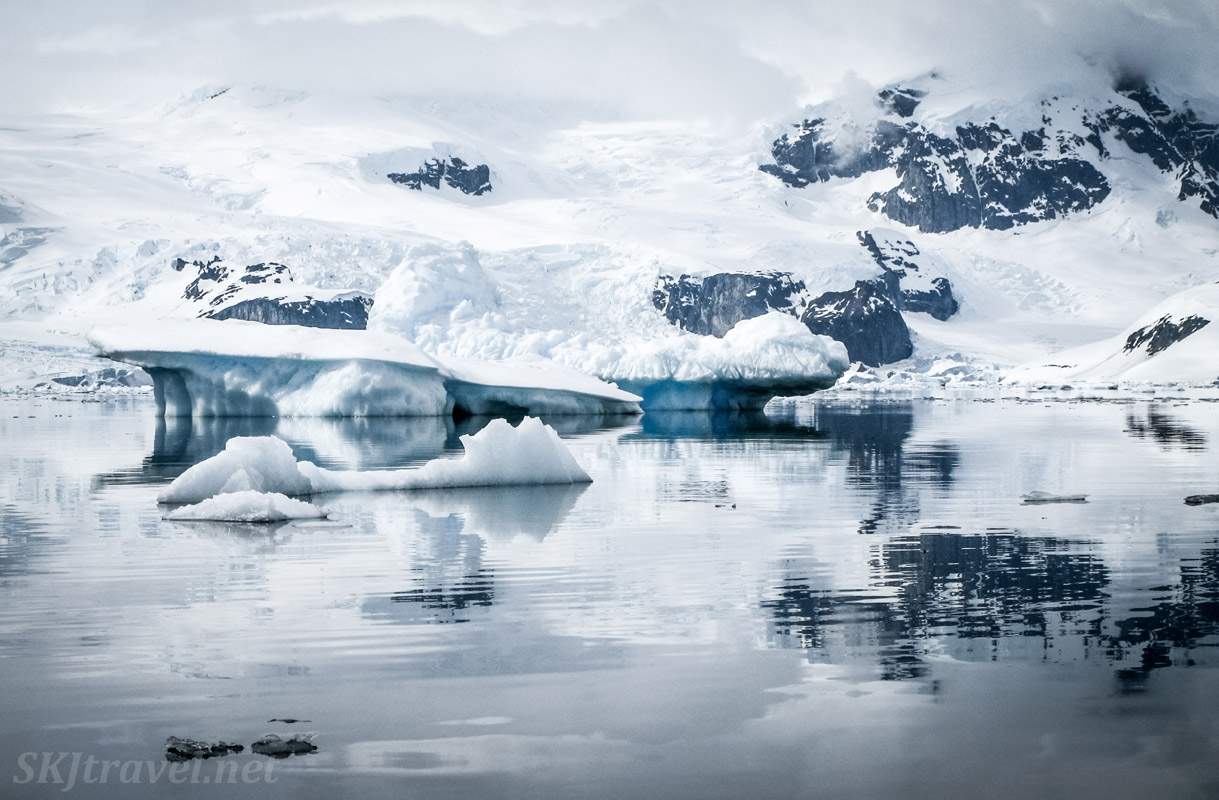 Here is our kayaking club paddling serenely on the open glassy water. Erik and I are on the far left in the group photo. These were taken by the guide following us in the zodiac. 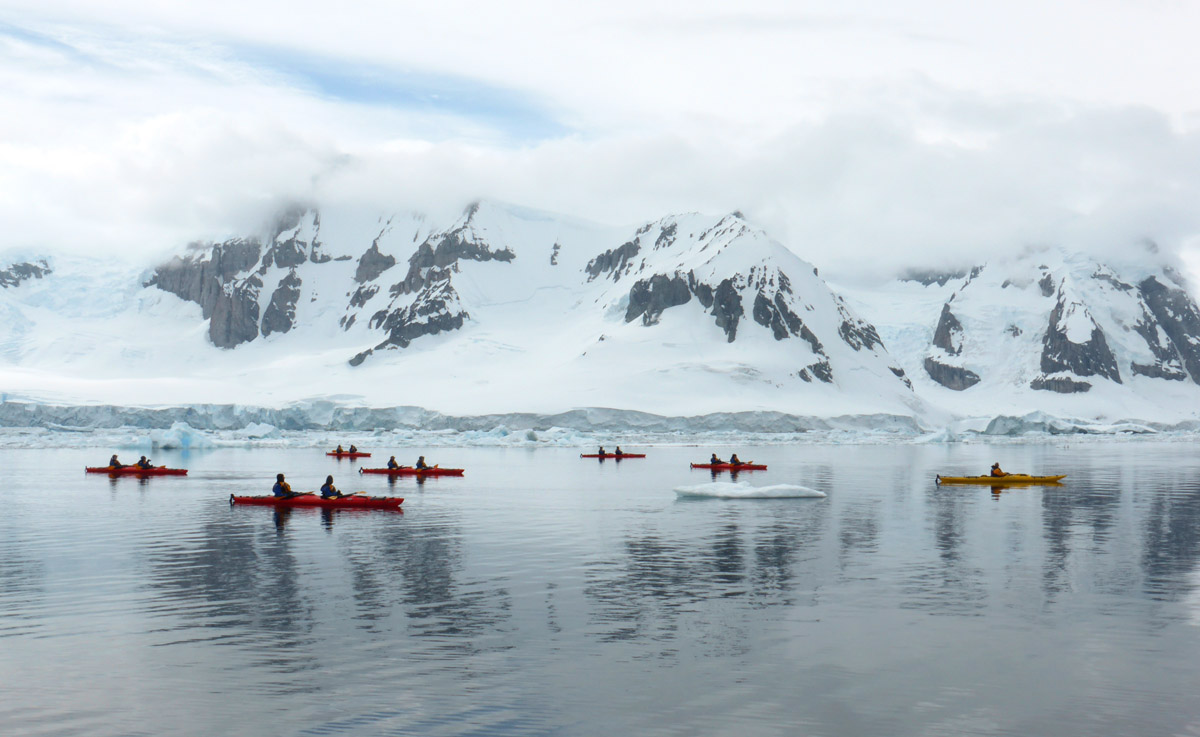 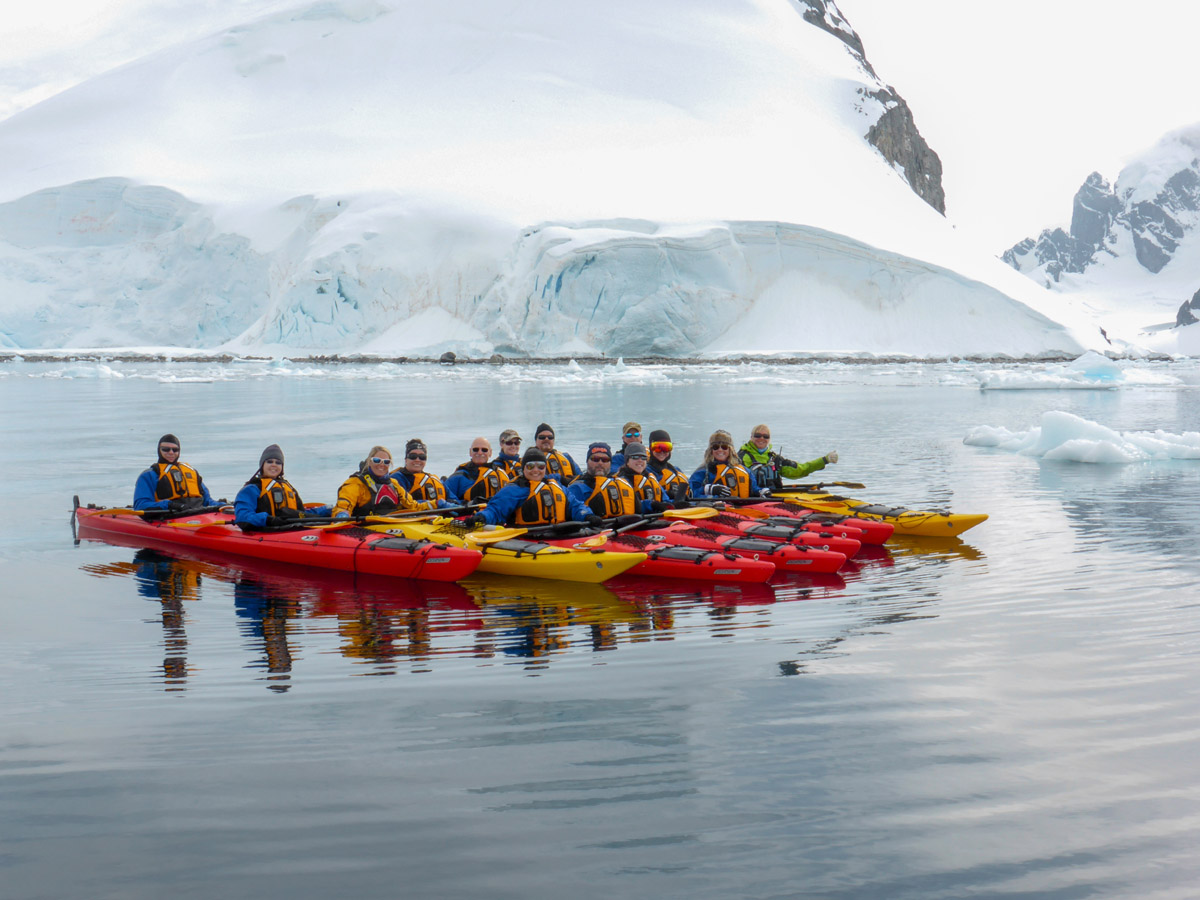 Okay, now I must decide whether to put the experiential highlight or the landscape (icescape) highlight next. I only have one photo to accompany the experiential highlight. Oh, let's do that one. It follows the chronology anyway; the photos I've shown to here were taken on the way into the harbor. The original plan was to circle around an island in the kayaks, but by the time we got around the backside to a labyrinth of icebergs, the guides decided they were too dense and moving too quickly, and that our safety would be compromised by heading into them. I confess I was disappointed, it looked like a splendid adventure. But of course the cruise company cannot risk 13 people being crushed by icebergs! You may wonder about their movement ... yes, they move through the water at an astonishing pace. On one of the zodiac cruises, we stopped still and just watched a large berg cover "ground" (sea) floating along. This gave me an epiphany of sorts in really understanding the accounts of early Antarctic explorers, of whom I am so fond, whose ships were endangered by this movement, and of course the famed ship Endurance which marooned Ernest Shackleton and his men. The ship Aurora, which carried the men and supplies that were to be laid down in advance of Shackleton himself crossing the land, was crushed like a handful of toothpicks in the ice. Erik coined the word "Shackletonned" as a verb for "to be surrounded and crushed by moving ice in Antarctica." So we did not want to be Shackletonned while kayaking around the island.

So instead, we paddled straight on ahead into the culdesac of a harbor. Which wasn't necessarily exciting, but rather, sublime. Just after the guide in the zodiac snapped the photo above, she suggested that we all be completely silent for "three minutes." Which was precisely what I wanted to do right then! She said not even to paddle, just drift apart from one another and soak up the incredible place in which we found our humble selves.

I was so happy for this. So we sat in an uncommon serenity. Silent. Silent. One minute passed. Then "phoooooffffffffff." We perked up and looked around. A few seconds later, it came again, like somebody blowing out a cake full of candles as quickly as they can -- a forceful rush of air breaking the crystal silence. The unmistakable sound of a whale clearing its blow hole. I was about to blow a fuse in my delight circuits, completely overloaded with joy. Everyone held to the three-minute code, and we watched as the whale passed behind us into the harbor's culdesac. A whale was the one thing I most hoped to encounter while kayaking. And though we'd seen a humpback our first day out, this minke whale, though much smaller, was much closer, and we watched it over several minutes as it circled completely around our little pod of kayaks in the harbor and then swam out the way we had paddled in. It was a much more intimate encounter than the humpback one ... the proximity and the stillness and silence in which we watched this creature of the sea move through the remarkable landscape with such exquisite timing made it one of those special moments I will always carry close to me.

I'm pleasantly surprised that I captured anything of this whale who blessed us with her presence. Once again, it's a photo that cannot convey the experience, but is presented merely as proof that I really did see what I say I did! 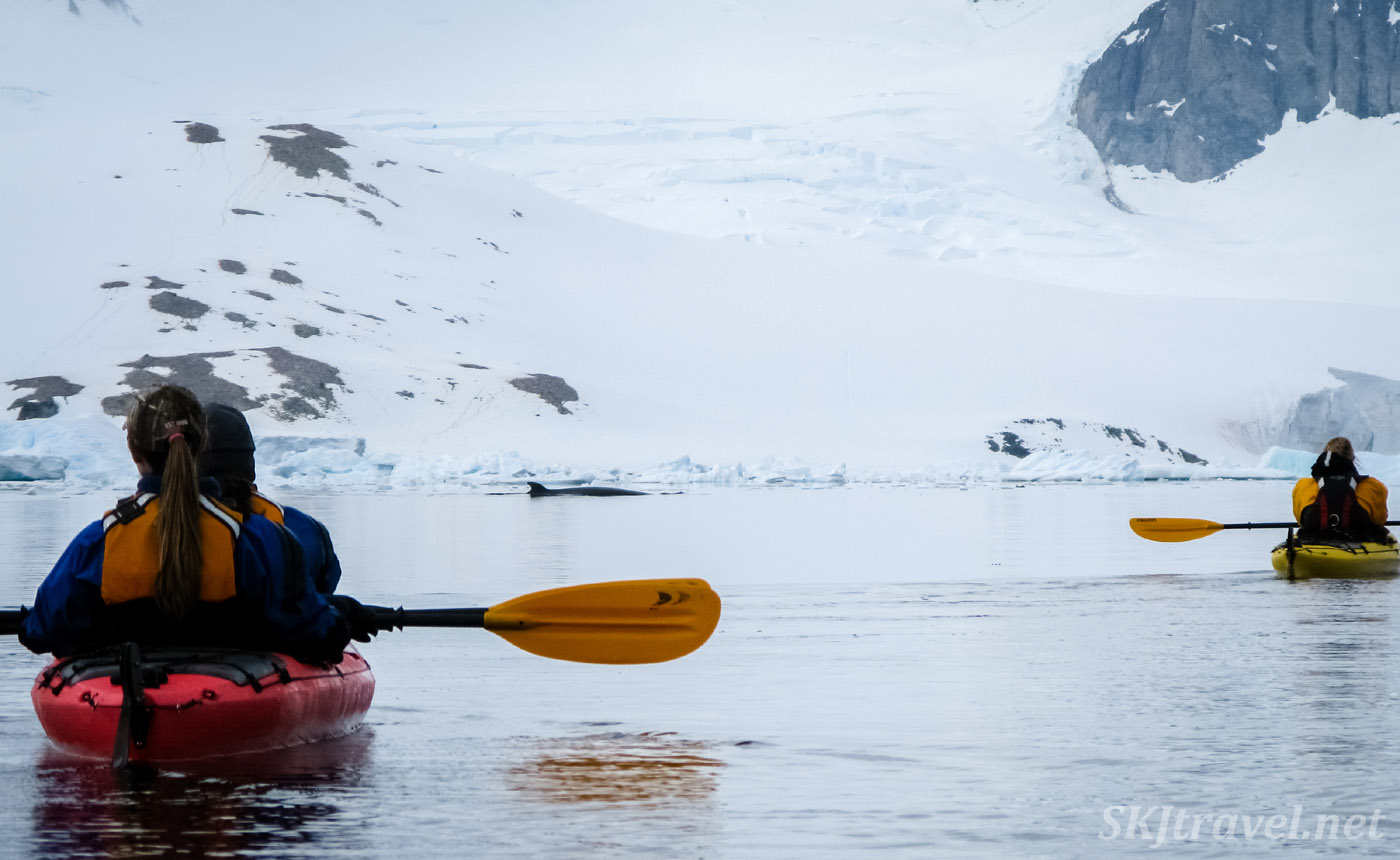 Exhilarated pretty far beyond description, it was with reluctance we turned around and followed our guide back to ship. Erik and I were passing beside an iceberg when we heard a rumble on the other side of it and then one of our club yelled, "Paddle! Paddle! Paddle!" We saw the wave approaching, but fortunately its momentum was broken by the iceberg and we barely felt a toggle. The other kayak, though, was close to the glacier that covered the land around the harbor when it calved a small calf. So close that ice hit one of them in the face and the splash sent water down her dry suit in spite of the rubber gasket around her neck. Fortunately, they were experienced kayakers and knew to paddle away on the same trajectory as the wave as fast they could. I don't know if Erik and I would have had the presence of mind to do the right thing; we may have ended up upside down!

The calm water was particularly nice because I hardly helped paddle at all, I was constantly taking out my camera from my life-vest pocket and snapping. I'd think, "okay now I'll help paddle" and zip the camera back into my life-jacket. Paddle 4 strokes, then, "Oh my gosh! Look at that! Amazing!" Paddle was put to rest across the kayak and out came the camera again. And here is where the tears welled up. The jumble of icebergs was just so wild and complex, colossal and overwhelming and fantastical, even beyond what my own quite talented imagination could have conjured. First let me present a photo at the end of the journey just to try to give a sense of scale to some of the following icebergs. This one shows our ship in the background behind some of the smallest icebergs depicted in the next set. 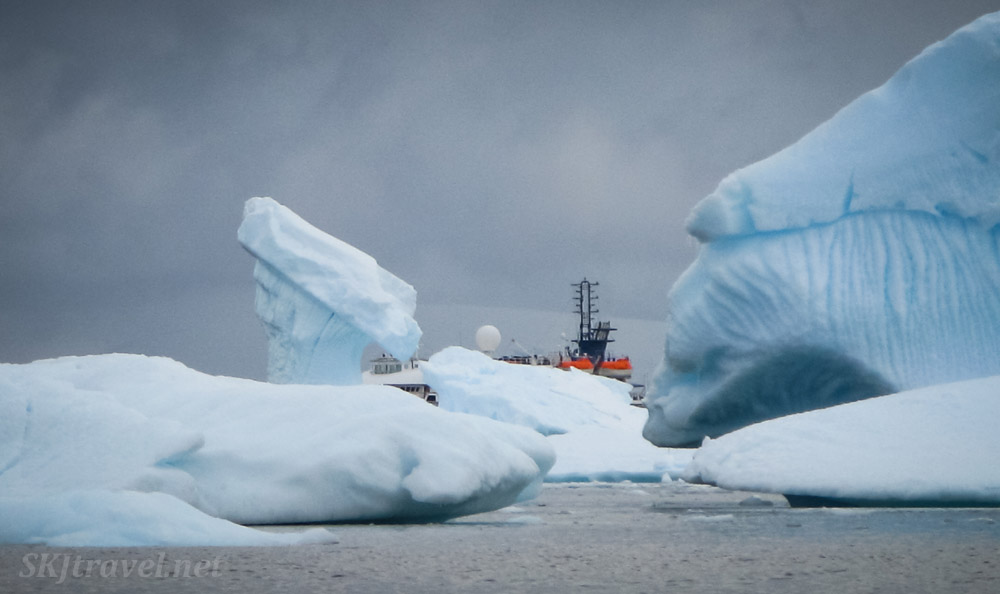 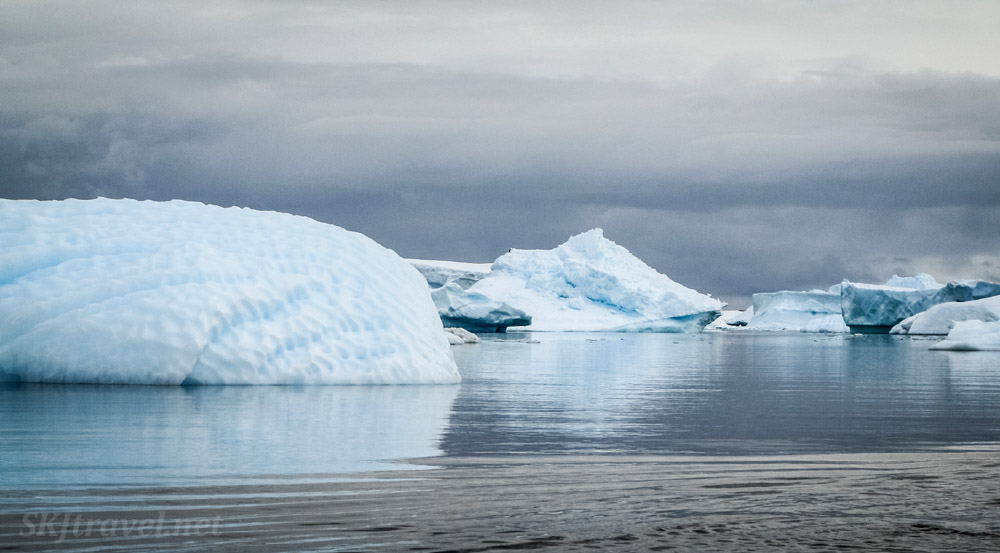 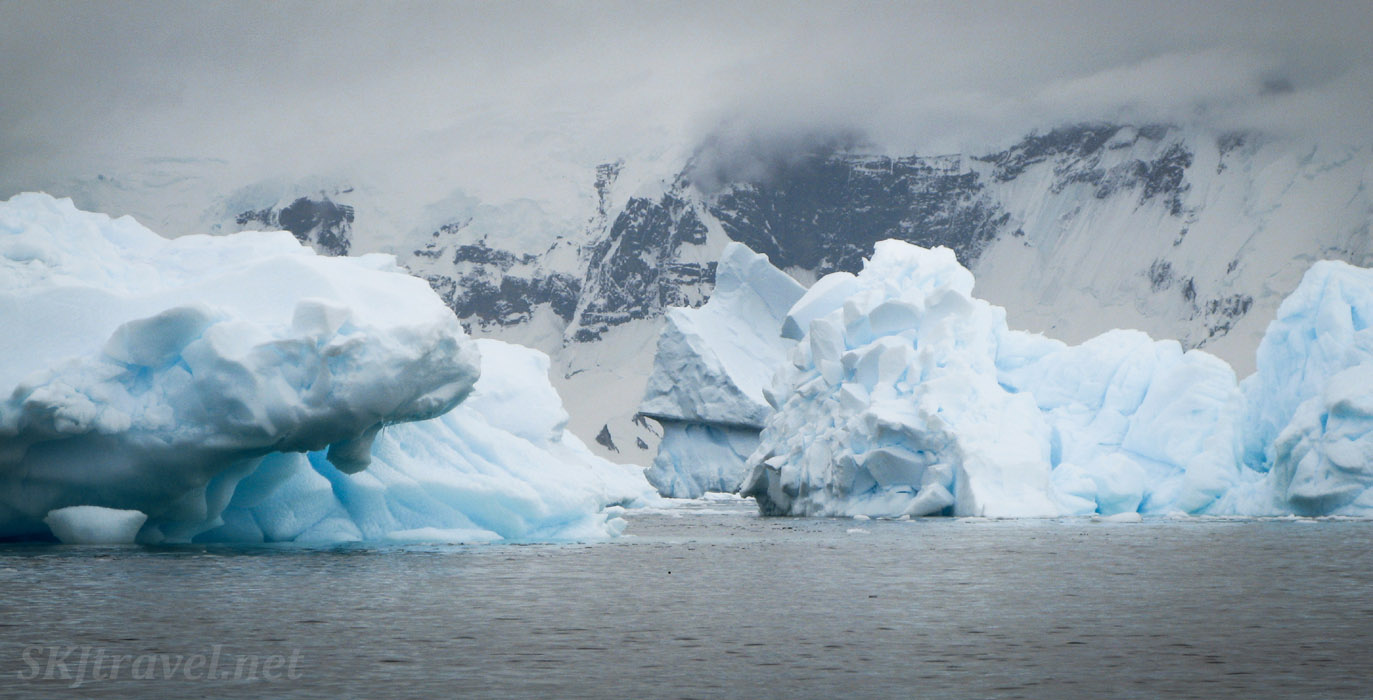 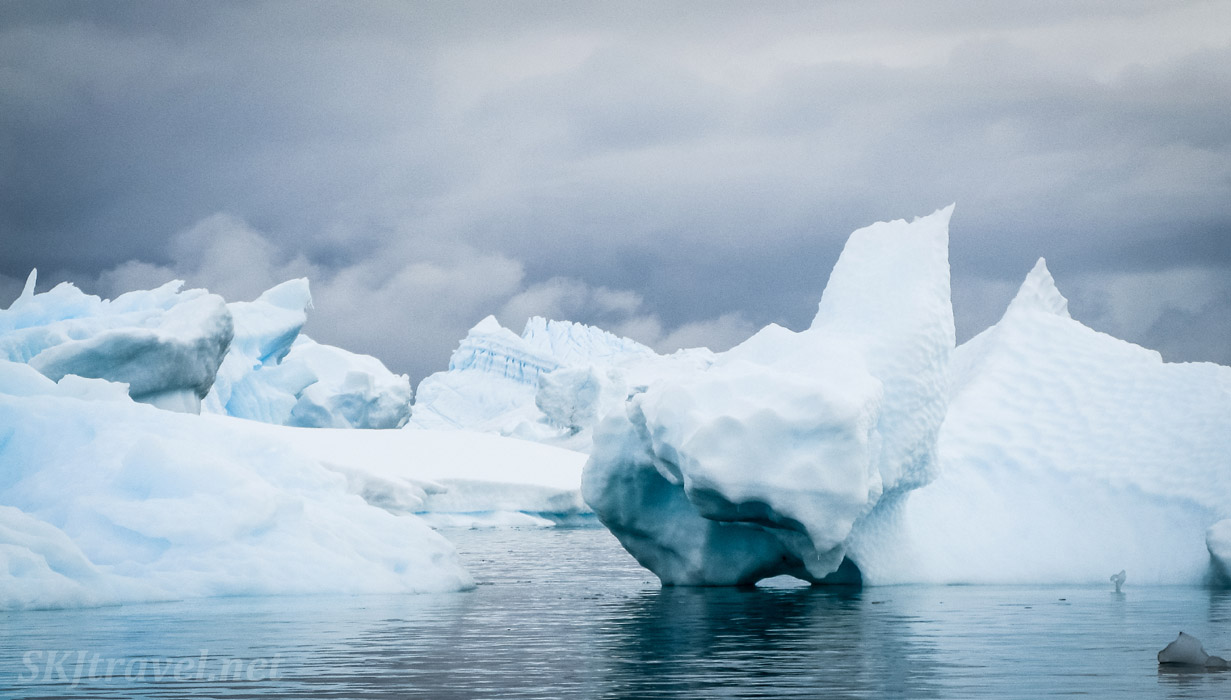 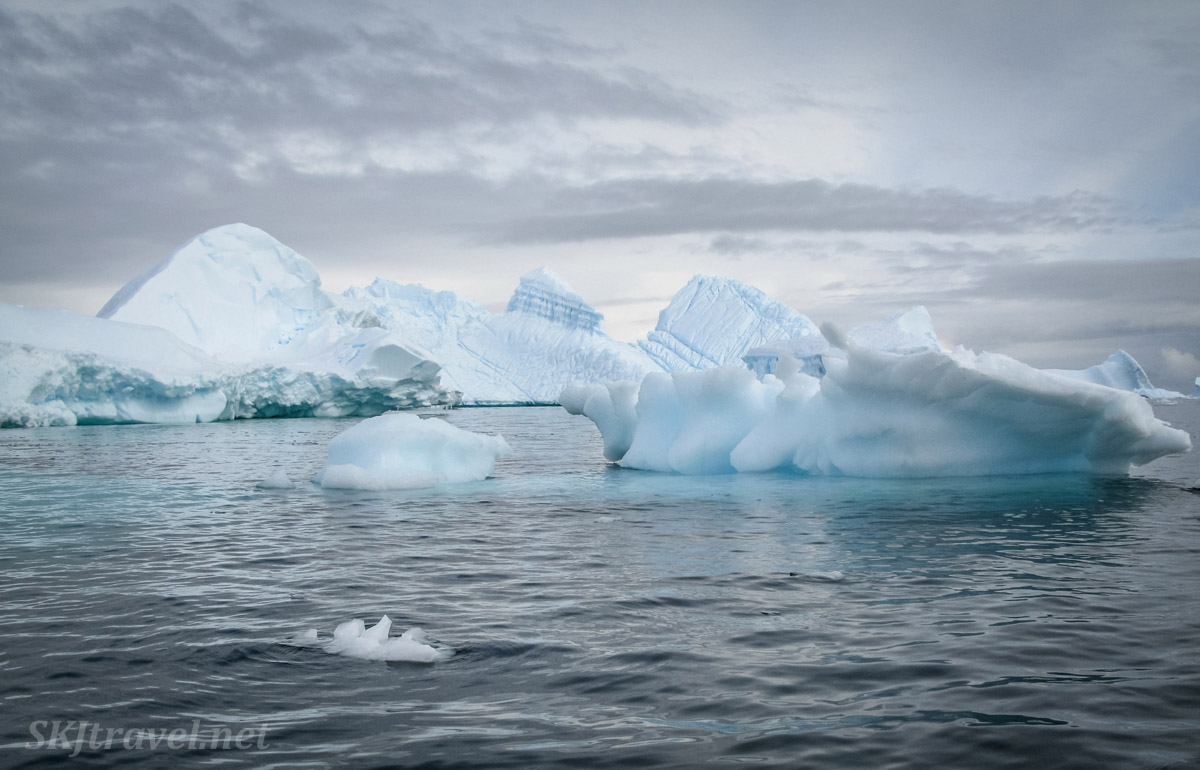 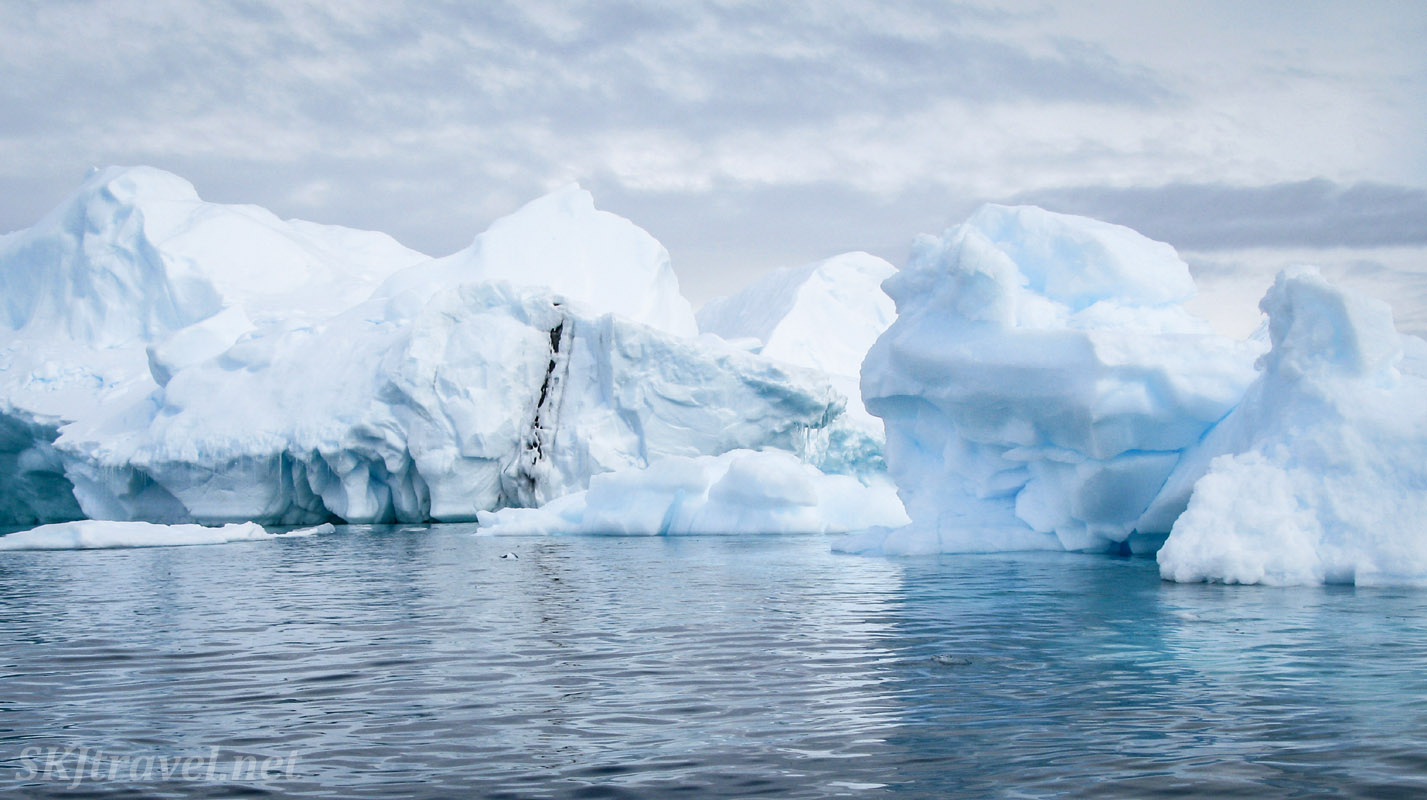 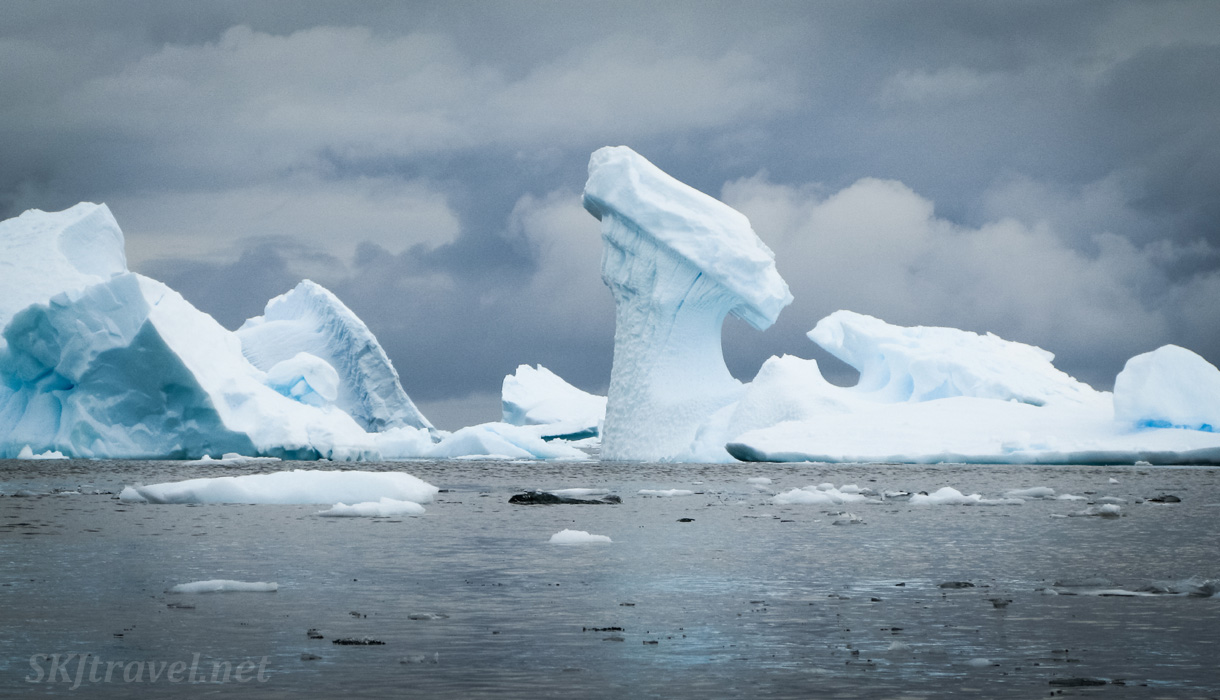 Hopefully the land will help give some scale to some of these other pics. The first one below is one of my very favorites, and I can't really say why. It just is. (remember that you can right-click on all of the photos in this article and open in a new tab to see larger) 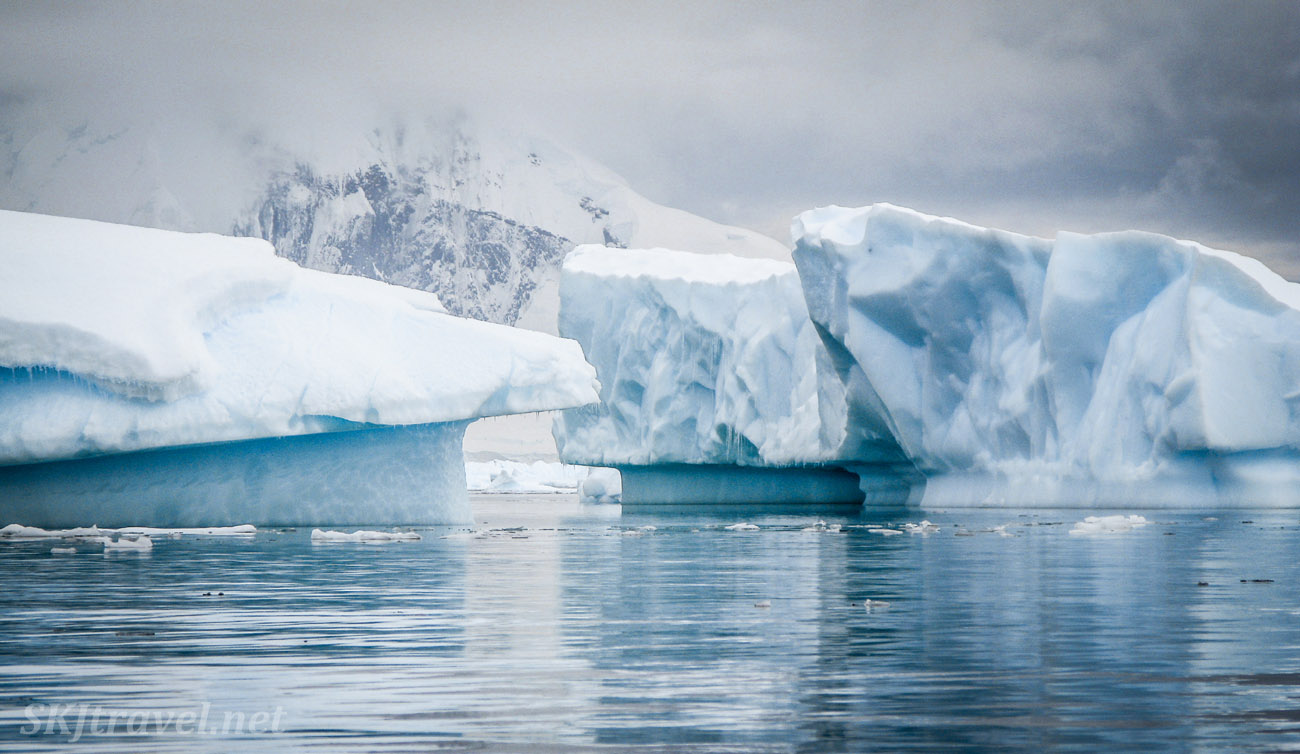 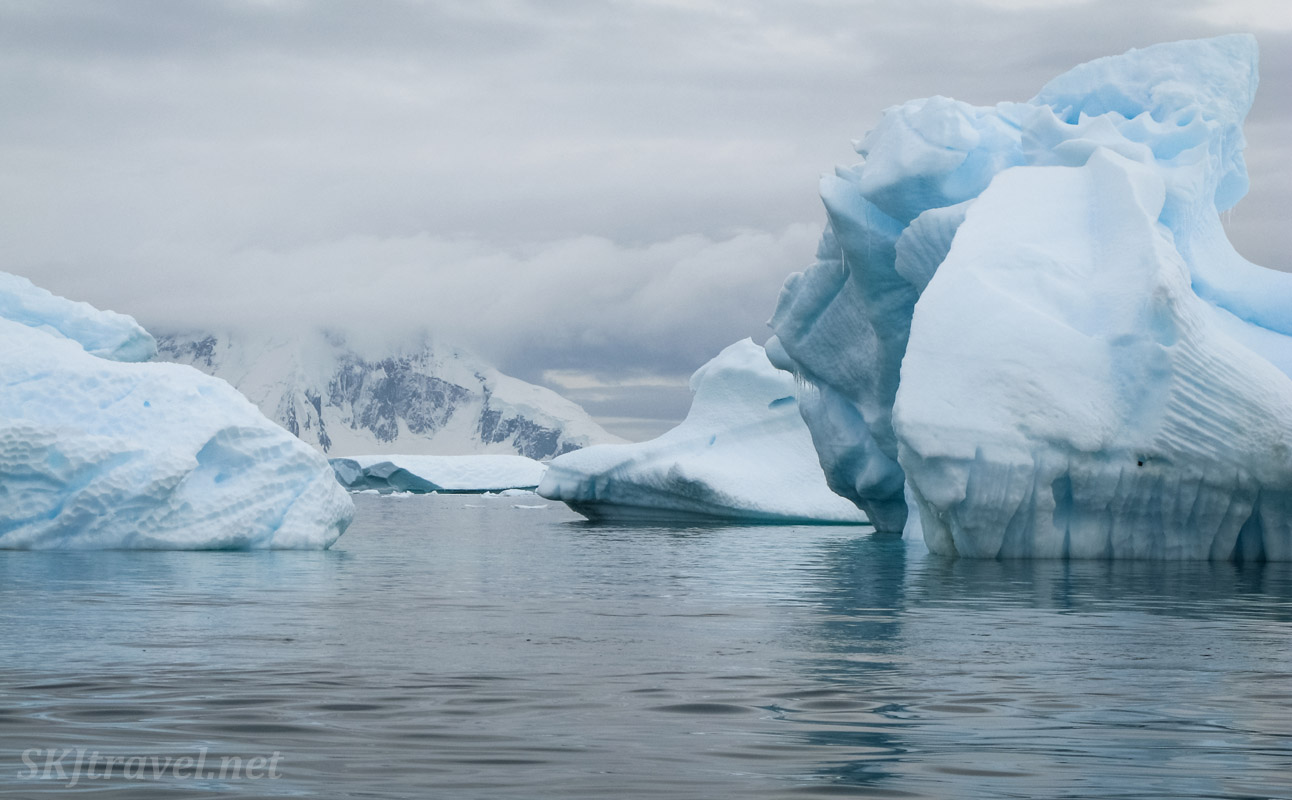 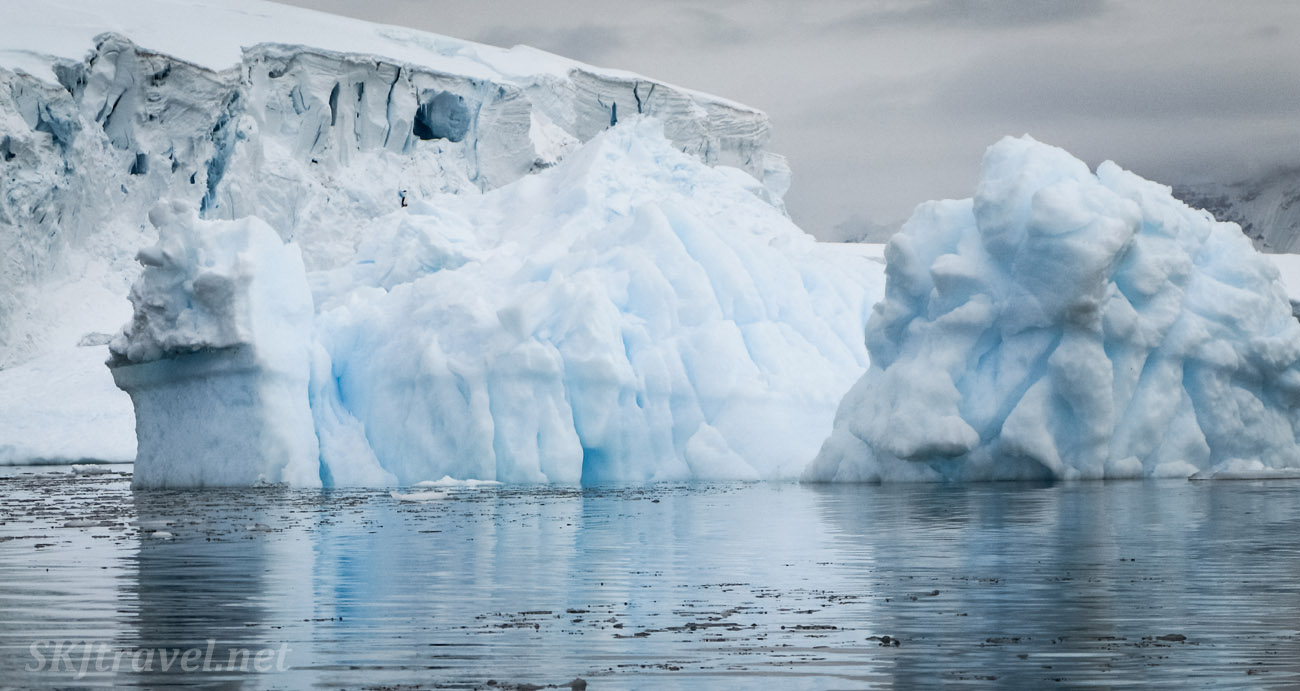 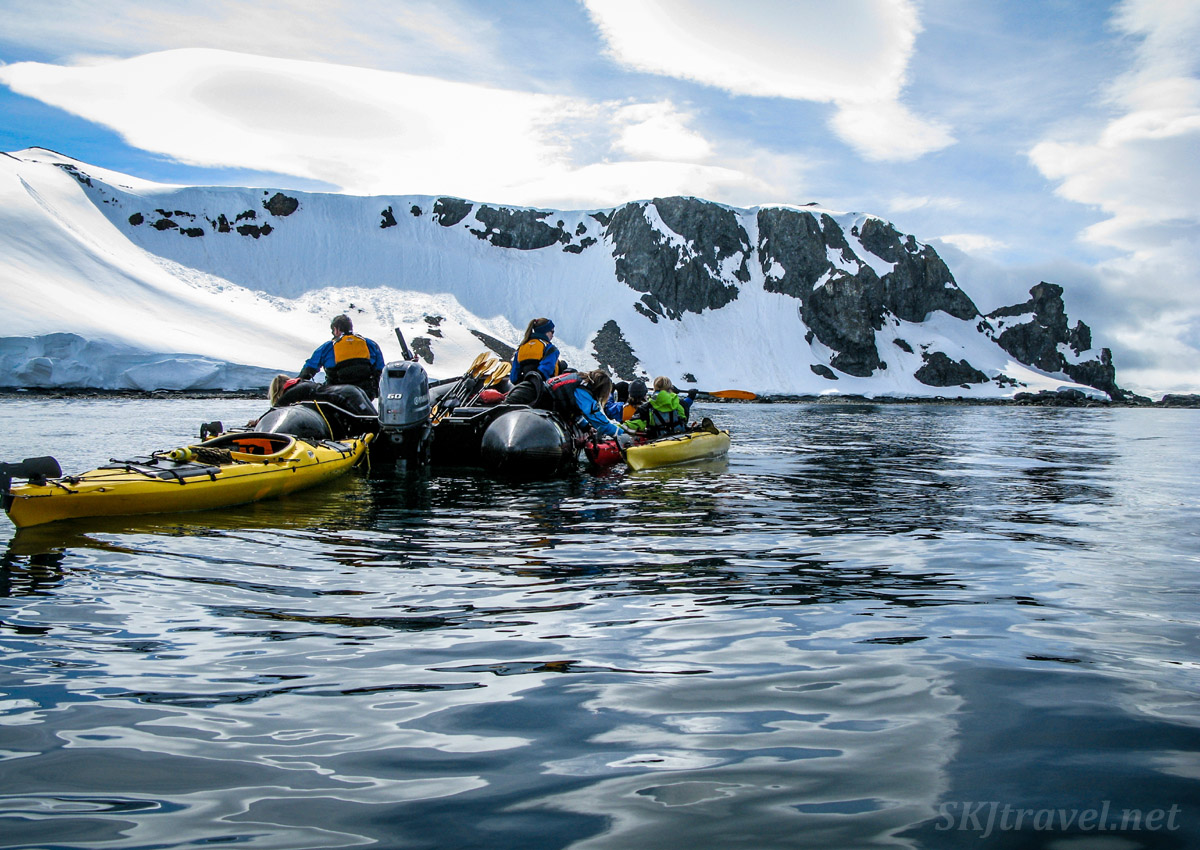 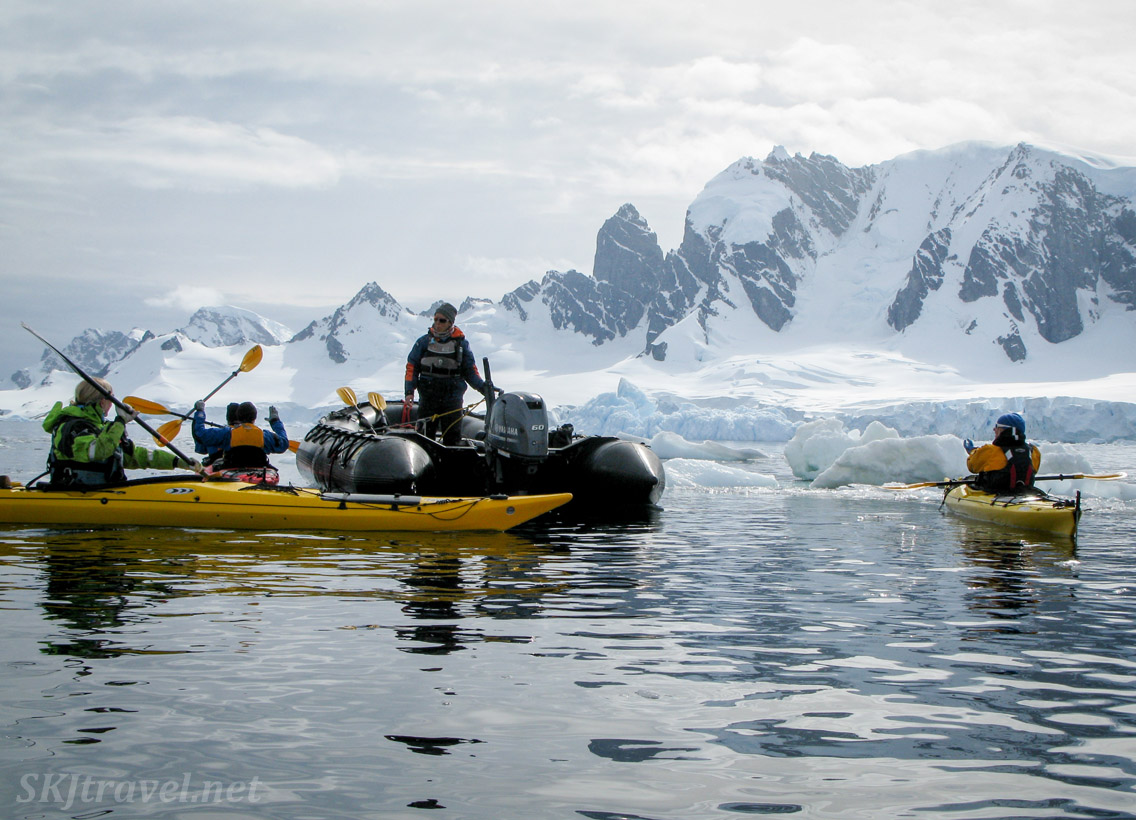 Although my favorite photos from this kayaking expedition -- one of my lifetime highlights -- are in the section above (the huge icebergs), I like this one below a lot, showing our guide's kayak tip for a reference point and a labyrinth of ice. It's just so ... *Antarctica!* 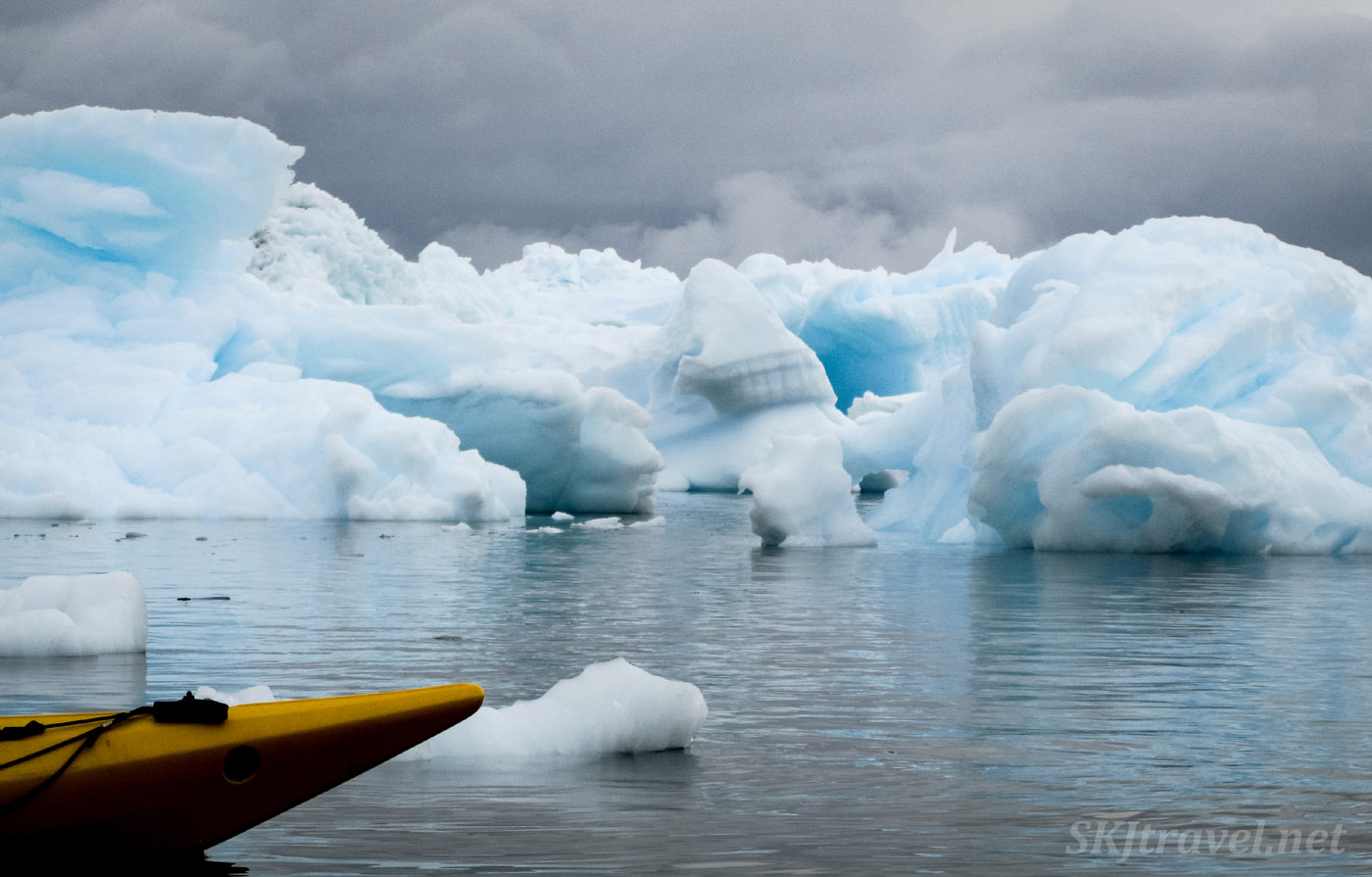