There's Ice in Them There Waters! Tabular Iceberg Titans and Mystical Wilhelmina Bay

When I stopped making posts in real-time (or near real-time) while traveling and backed off this blog a bit to write only upon inspiration and free time, I started organizing posts by more broad topics rather than chronologically. And so it is with Antarctica ... penguins, kayaking, now a focus on ice. I will win no awards for logical and well-ordered photo essays! But here is a collection with a theme of ice. Obviously, this is the primary defining feature that makes traveling the seas around Antarctica so special, magical and other-worldly. So allow me to begin with what is probably my number-one favorite photo from the trip. To me, it represents in a majestic fashion the things I came to Antarctica to see  -- the variety of icebergs and penguins. (and blue is my favorite color ... maybe that adds to the appeal) Can you see the penguins on the smaller iceberg in the middle of the photo? They help provide the sense of scale. Big scale.  If you were ever to view one of my photos larger (right-click), this is the one to view. 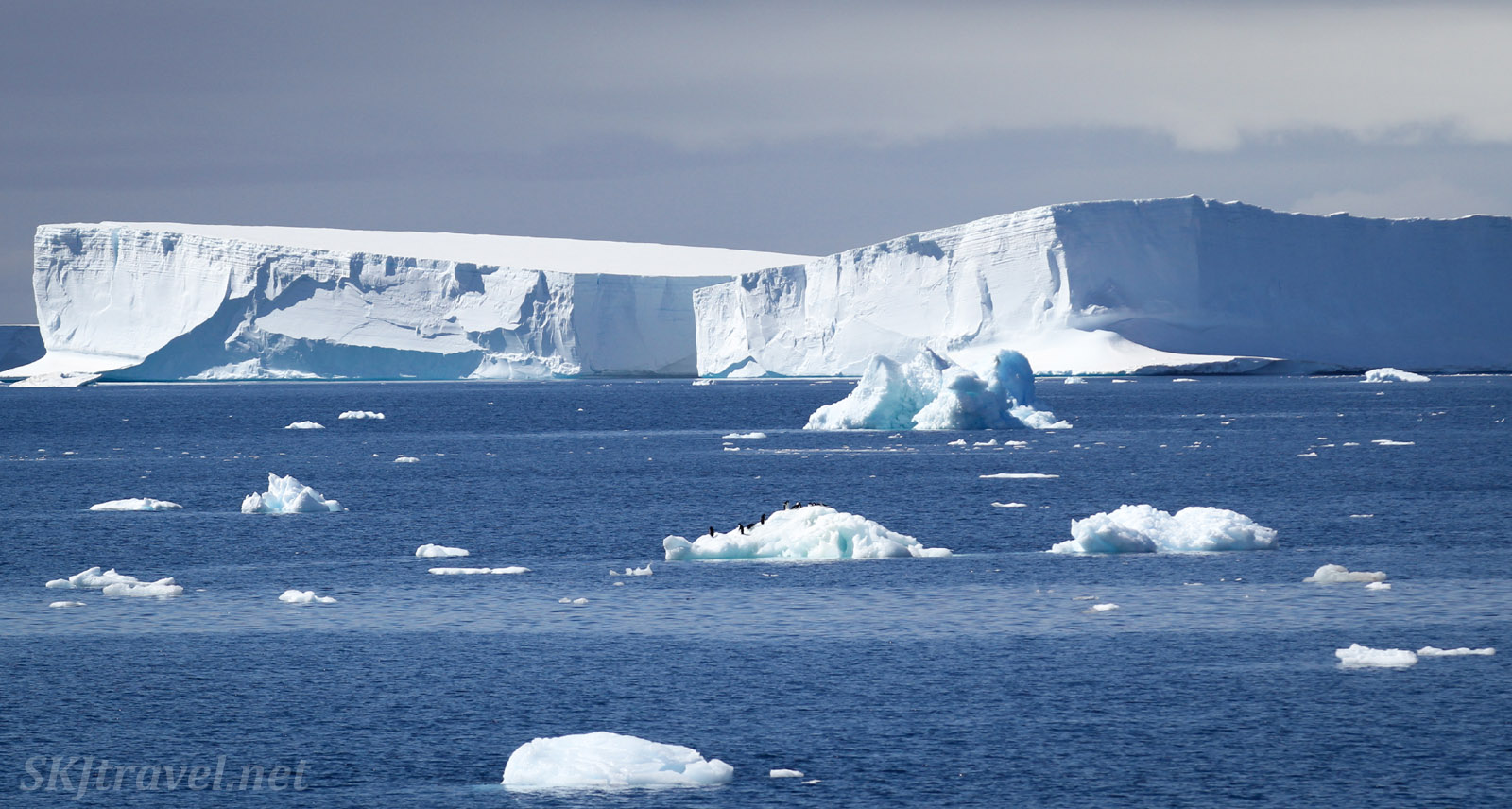 Now to anyone else, this next pic will seem like a really lame photo, but it was the first major iceberg we saw from the ship, which the expedition leader announced we were coming toward so we could rush on deck to see it. So, for me, having seen nothing else like it in my life to date, it was exciting and worth documenting. It's kind of surreal to come across these huge blocks of ice, big as an apartment building, just floating serenely, quietly through the ocean. It's mind-boggling to realize that only a small fraction of the iceberg's total volume is visible above the water. Why is that? Because of the different densities of freshwater ice (originating from snow) and seawater. 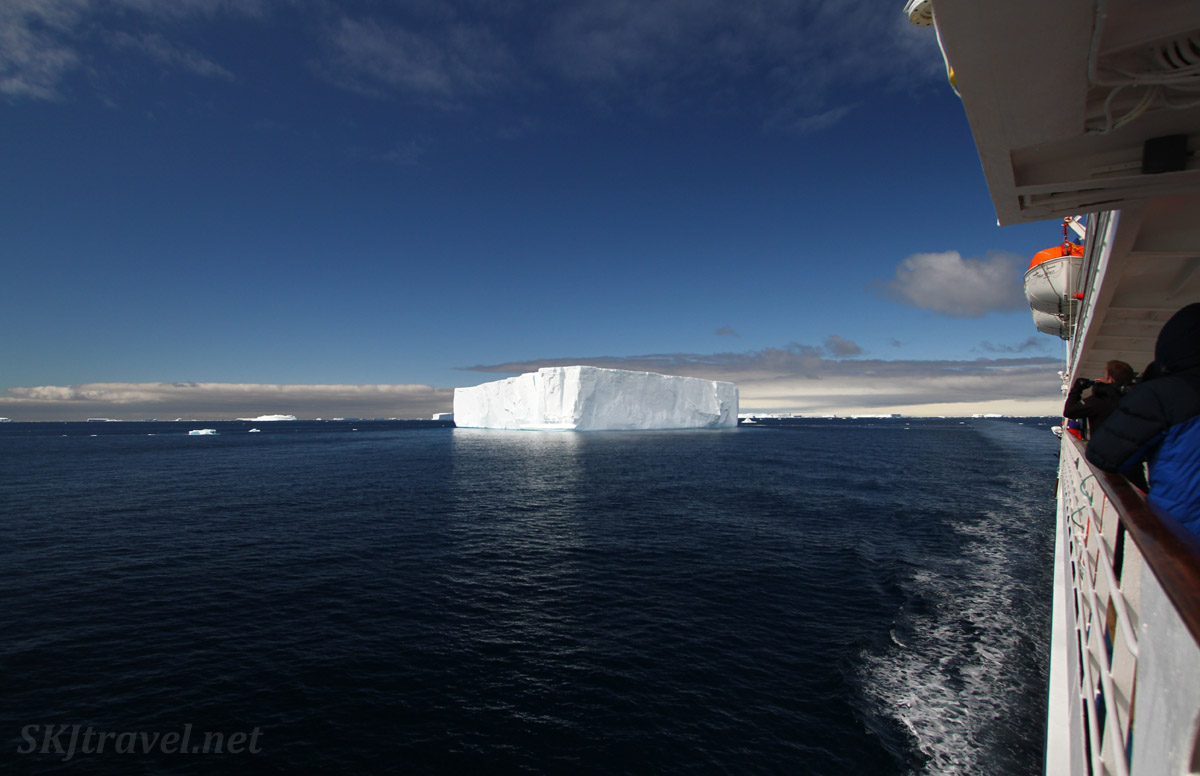 So there are many types of icebergs. I have used to date, and will continue to use, the term generically for any ice formation sticking up out of the water, for ease of the lay person's reading, because I think most of us non-polar-scientists and non-climatologists don't care about the distinction and find the unfamiliar terms merely distracting. But for the record, if you're interested, I present to you the technicalities of what to call floating ice on water. This is copied from the NOAA website:

"To be classified as an iceberg, the height of the ice must be greater than 16 feet above sea level and the thickness must be 98-164 feet and the ice must cover an area of at least 5,382 square feet. There are smaller pieces of ice known as “bergy bits” and “growlers.” Bergy bits and growlers can originate from glaciers or shelf ice, and may also be the result of a large iceberg that has broken up. A bergy bit is a medium to large fragment of ice. Its height is generally greater than three feet but less than 16 feet above sea level and its area is normally about 1,076-3,229 square feet. Growlers are smaller fragments of ice and are roughly the size of a truck or grand piano. They extend less than three feet above the sea surface and occupy an area of about 215 square feet."

The colossal tabular icebergs are particularly useful to scientists, for they can date the age of the iceberg much like you can a tree using the tree rings, by counting the striations in the exposed cliffs of the iceberg which has detached from a glacier; each winter a new layer of snow is added and you can see a faint line between each near year's snow, falling after the previous one has melted and compacted. You can see not only age, but also the general climatic conditions of each year based on the height and chemical composition of its layer. 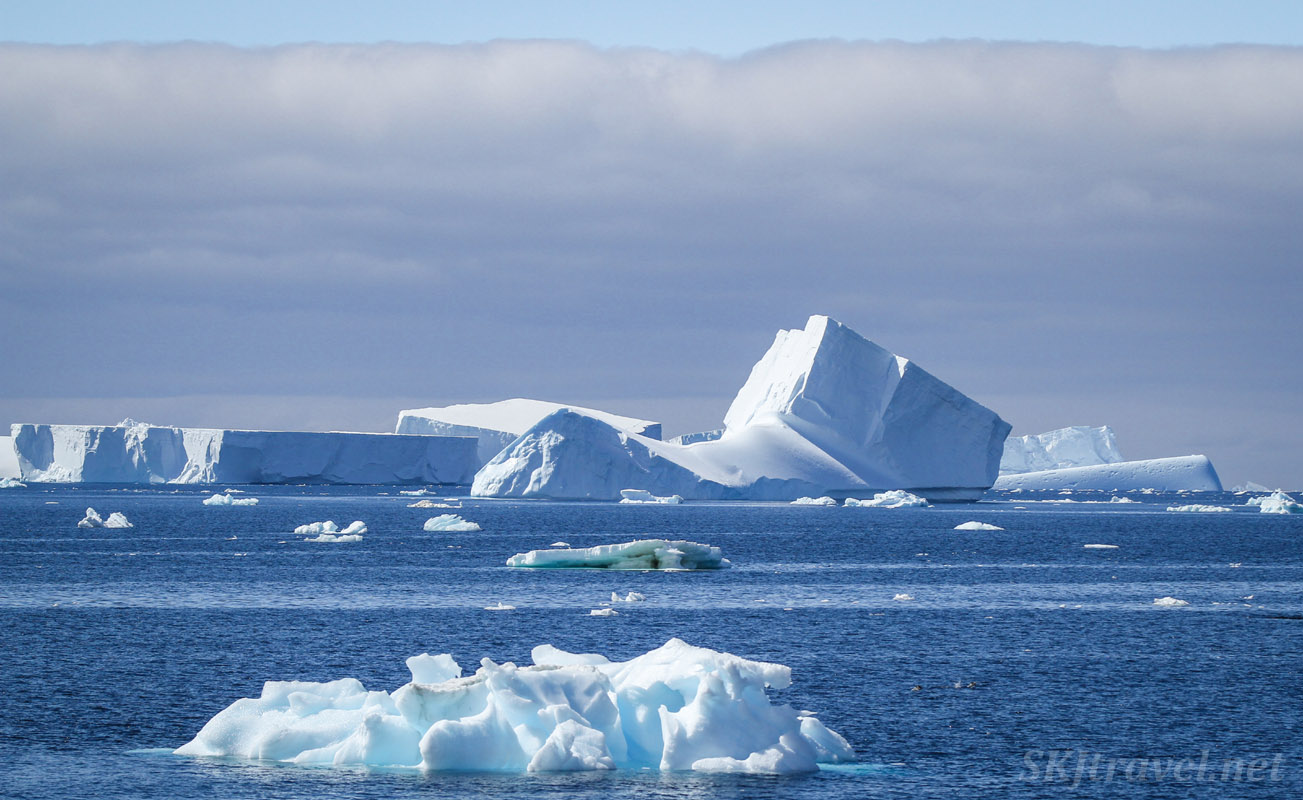 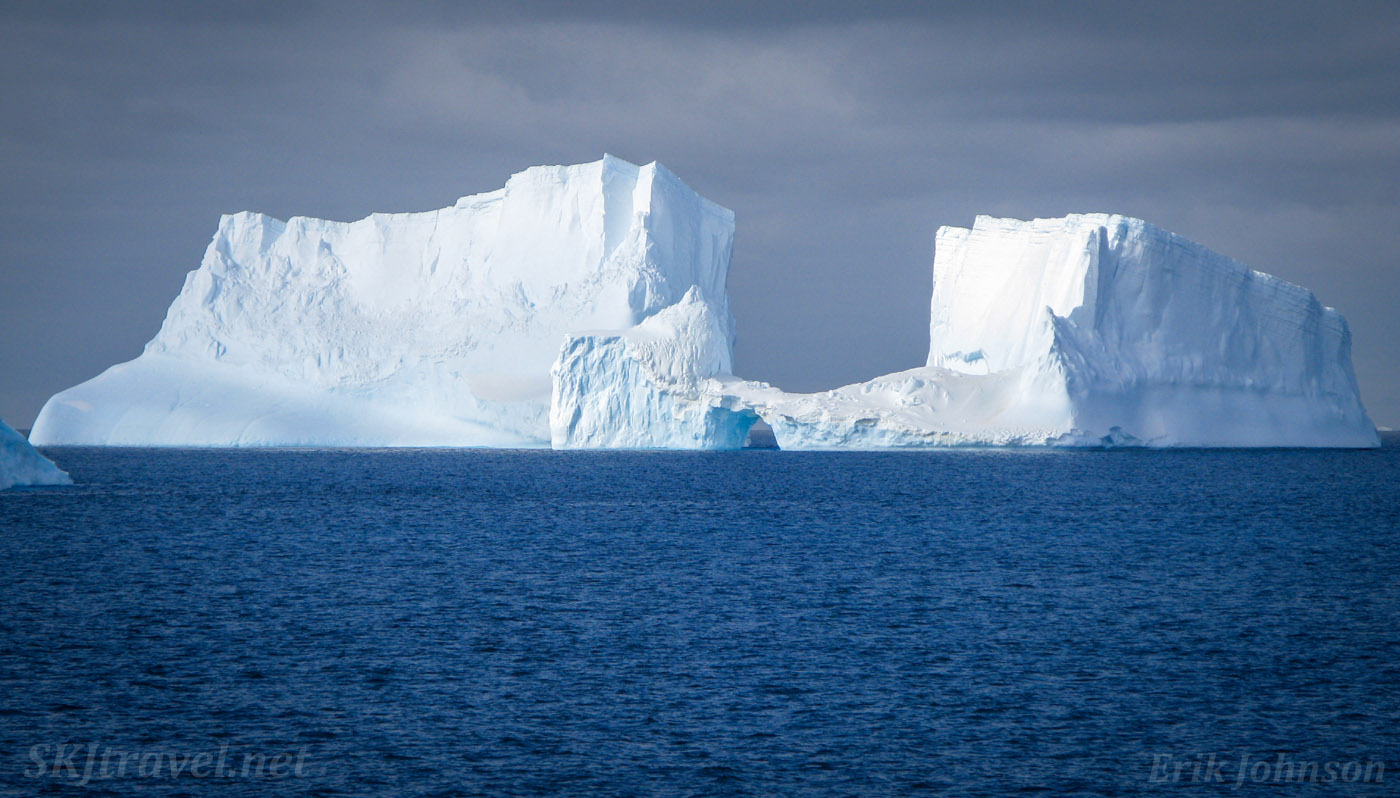 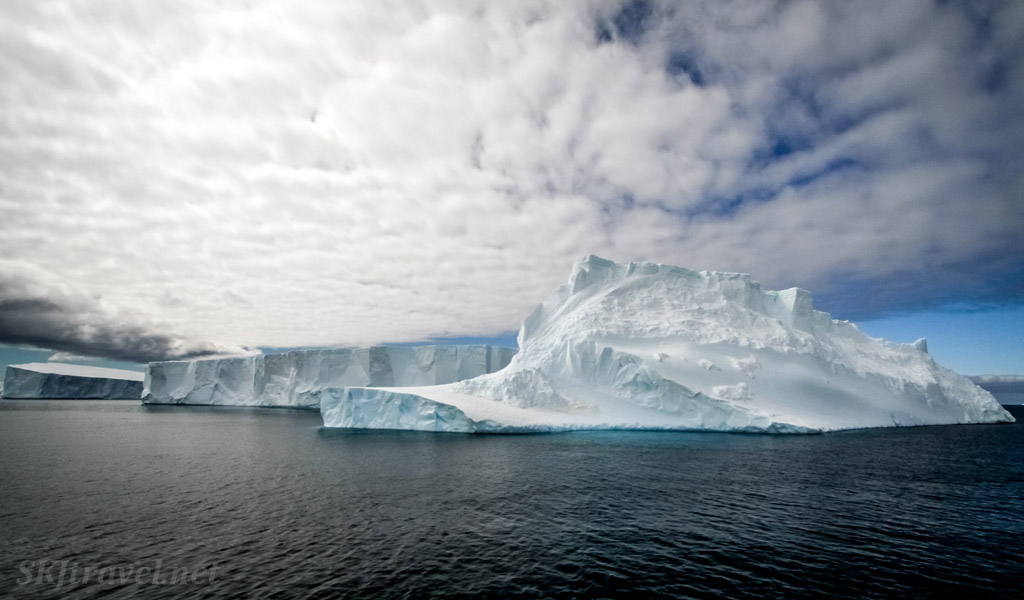 I've seen small glaciers calve before, and of course members of our kayaking club experienced one first hand. Can you even imagine a chunk like the ones above separating from its mother and floating off? Here's a bit of snow in Wilhelmina Bay that looks ready for launch. 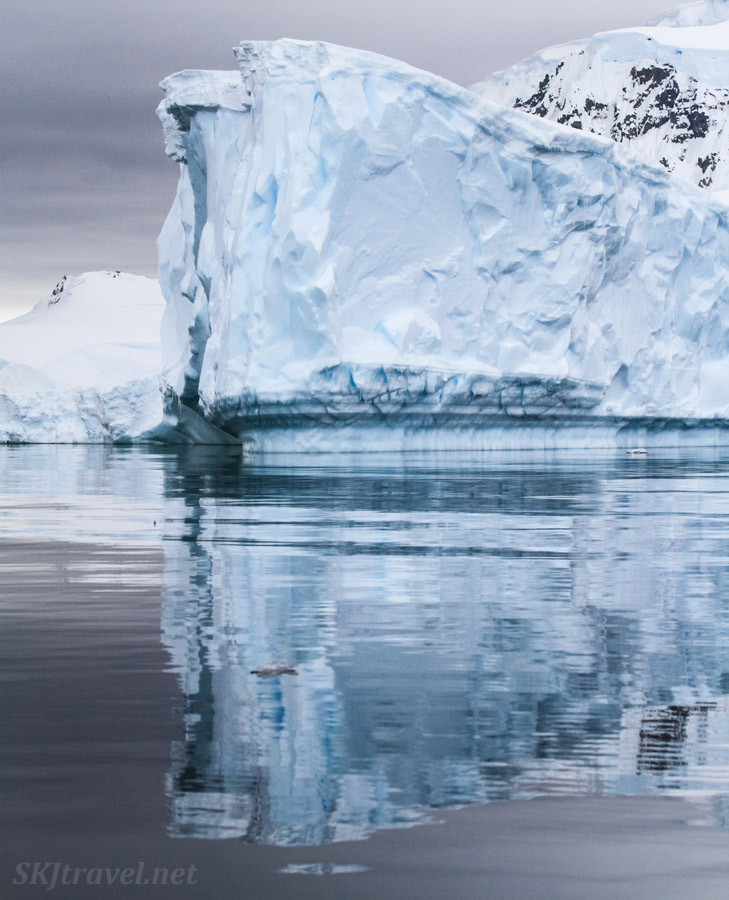 Check out the face of this glacier, the topography and colors. If you ever thought snow was just white ... you have been corrected. On the far left you can see some of those striations like tree rings I mentioned above. 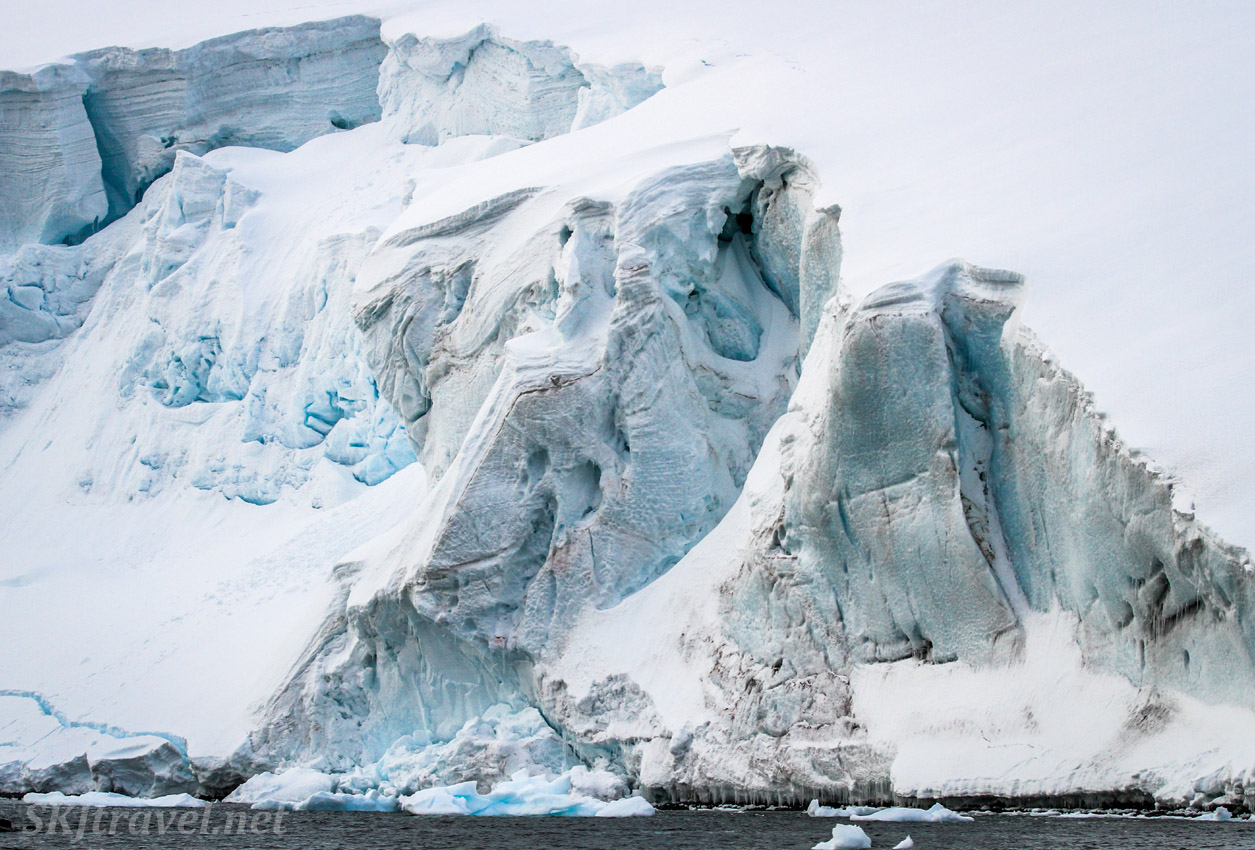 One of the loveliest places we visited to see smaller icebergs -- the bergy bits and growlers -- was Wilhelmina Bay via zodiac cruise. For these "cruises" (two to three hours in length), smaller rubber zodiacs were deployed from the ship with 10 passengers in each. For the most part they all traveled around the site of interest to basically all the same places, but often different drivers (one of the expedition crew) would explore different little nooks and crannies of a bay. If one boat saw something of particular interest, they'd radio in to the other ones to come over and see. It seemed like we were always in a zodiac doing the radioing rather than responding to somebody else.

Our tour around Wilhelmina Bay particularly emphasized the peculiar lighting and coloring that often beset the Antarctic landscape.  I didn't keep an actual journal or diary on the trip (though in retrospect I wish I would have), but I did write down some occasional notes that I wanted to be sure to remember. I didn't know how well my photos would evoke reality, so I wrote down for myself so I would be sure to remember of Wilhelmina Bay, "... the mountains in the back illuminated yellow from a seemingly unidentified source as if they are creating their own light, that they glow from within themselves; they’re glowing [really from the sun, of course] under the low ceiling of gray clouds, then the dark peaks thrusting up out of the glow, and the slate gray water, then a neon-blue iceberg in the slate gray water in front of the glowing golden mountains. Once again the water like glass so still and smooth." I took two cameras on the zodiac, my wide-angle with a warming filter and my 70-200 with no filter. These first pics below came from the wide-angle with the filter, which really brings out the mystical dark nature of the water, which was something that particularly stood out to me while there, and the moody feeling of the place. The first one isn't a very exciting photo but it depicts the "infinity pool" feeling of the bay, like the horizon there on the right is the literal edge of the world. 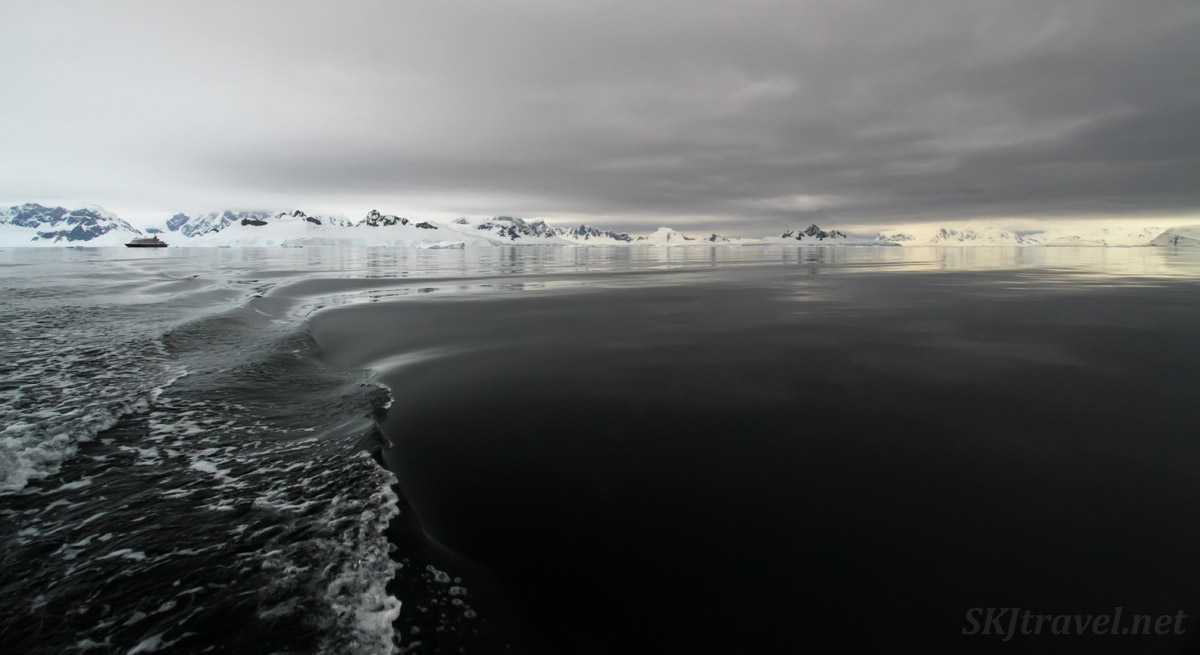 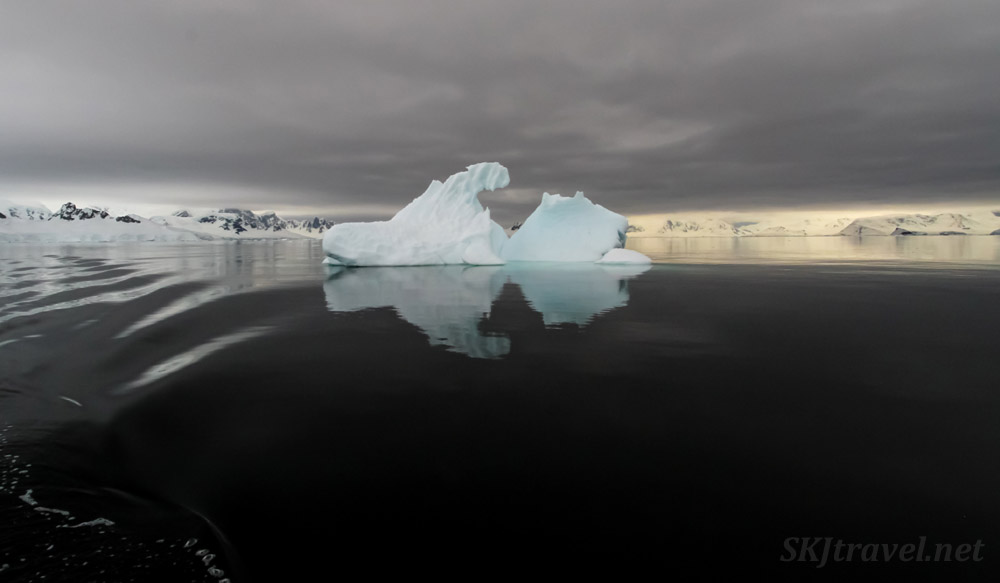 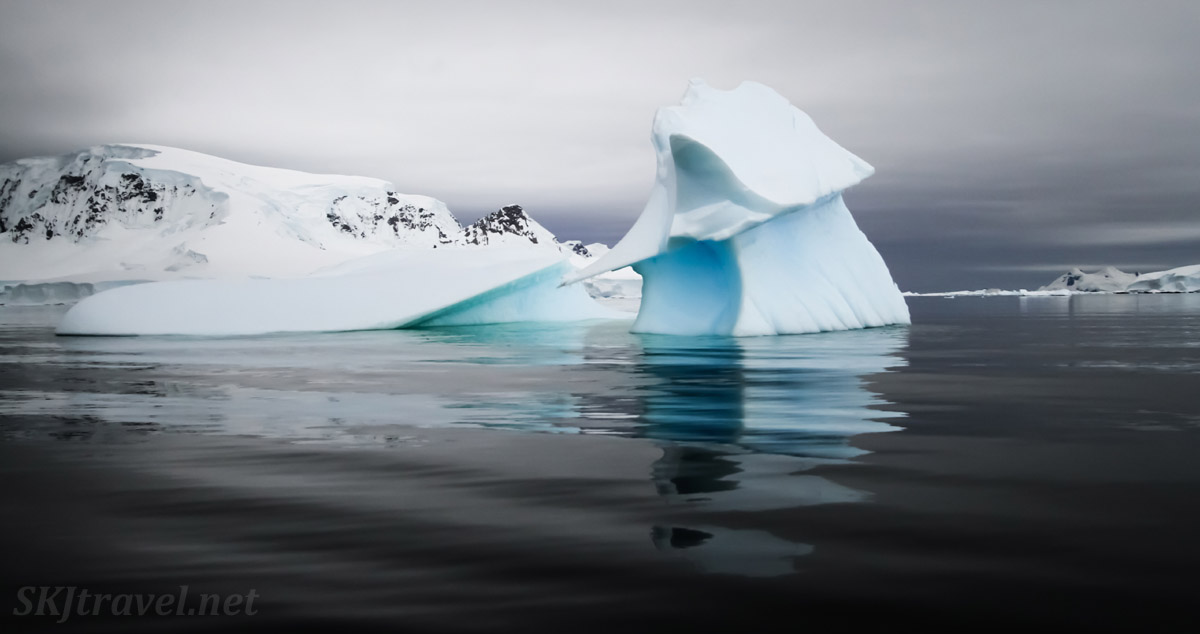 The rest of the photos I'm sharing from Wilhelmina were taken with the 70-200 with no filter. But these first two illustrate, I think, the layers of colors that I described in text in my notes, with the yellow, blue and gray. 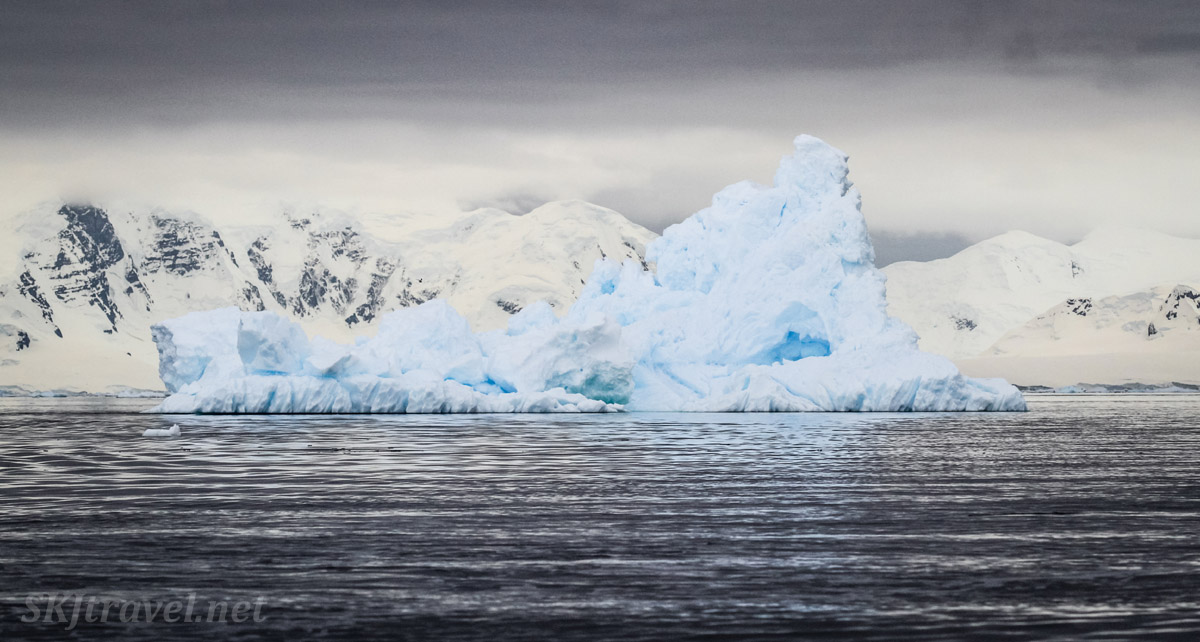 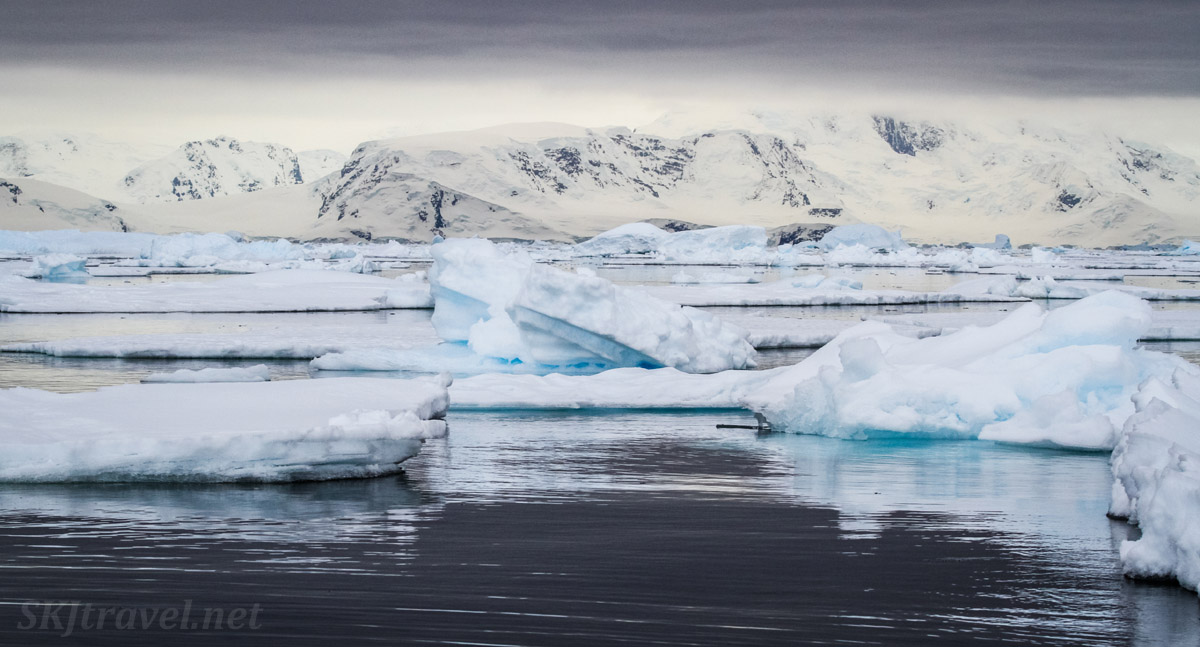 Some various icebergs with interesting topography in them and icicles. 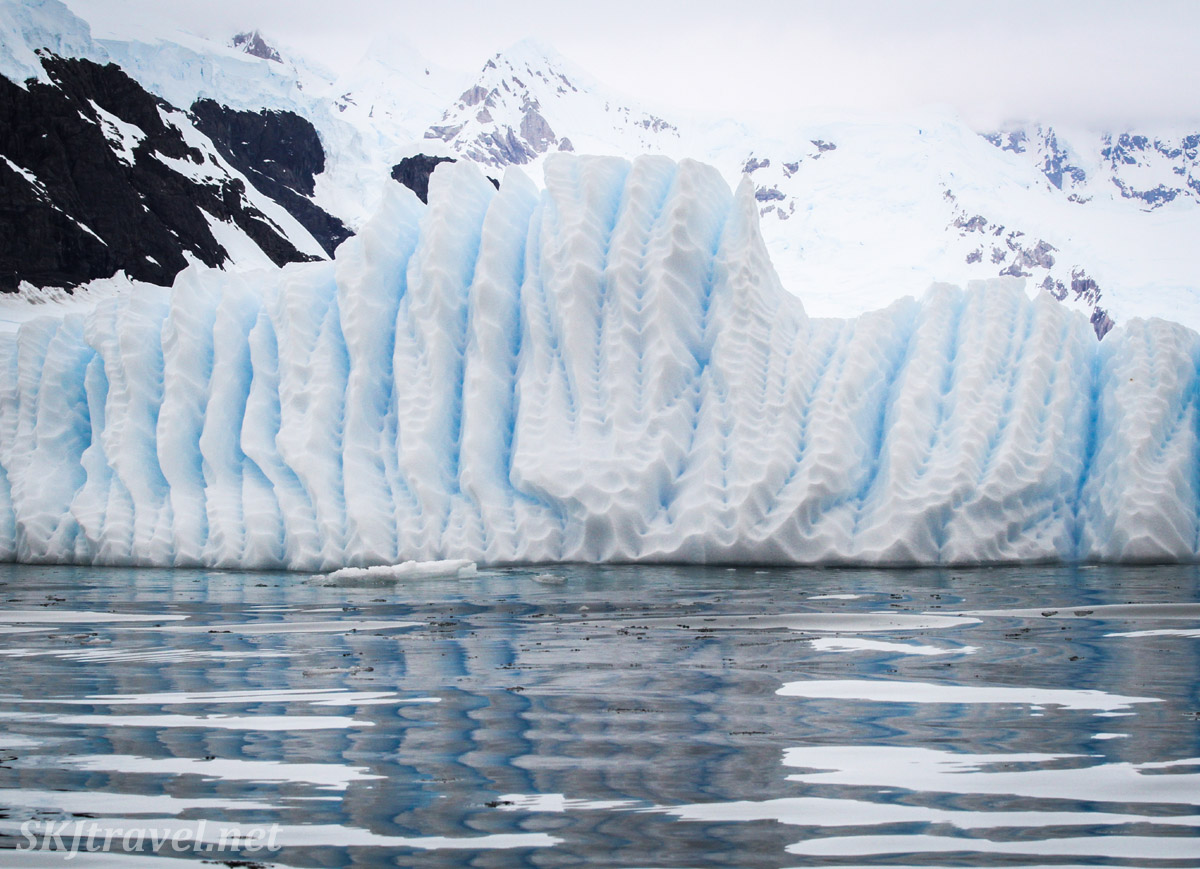 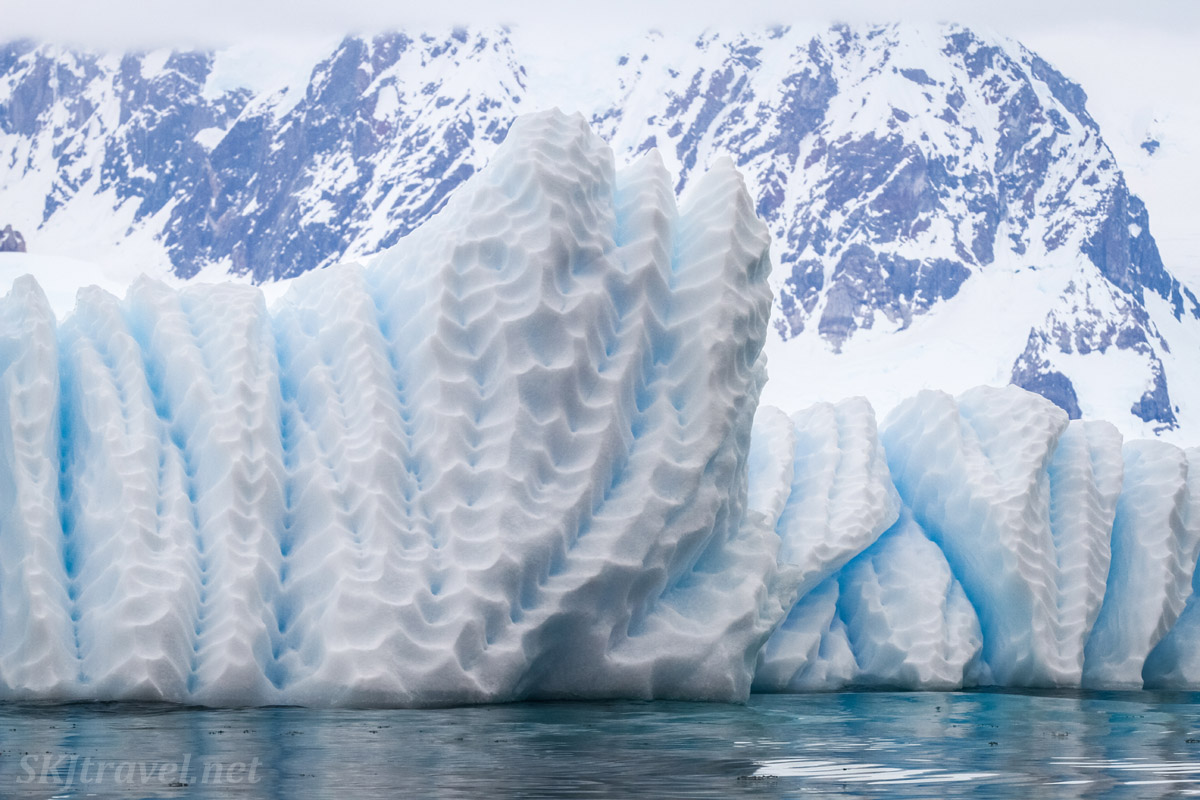 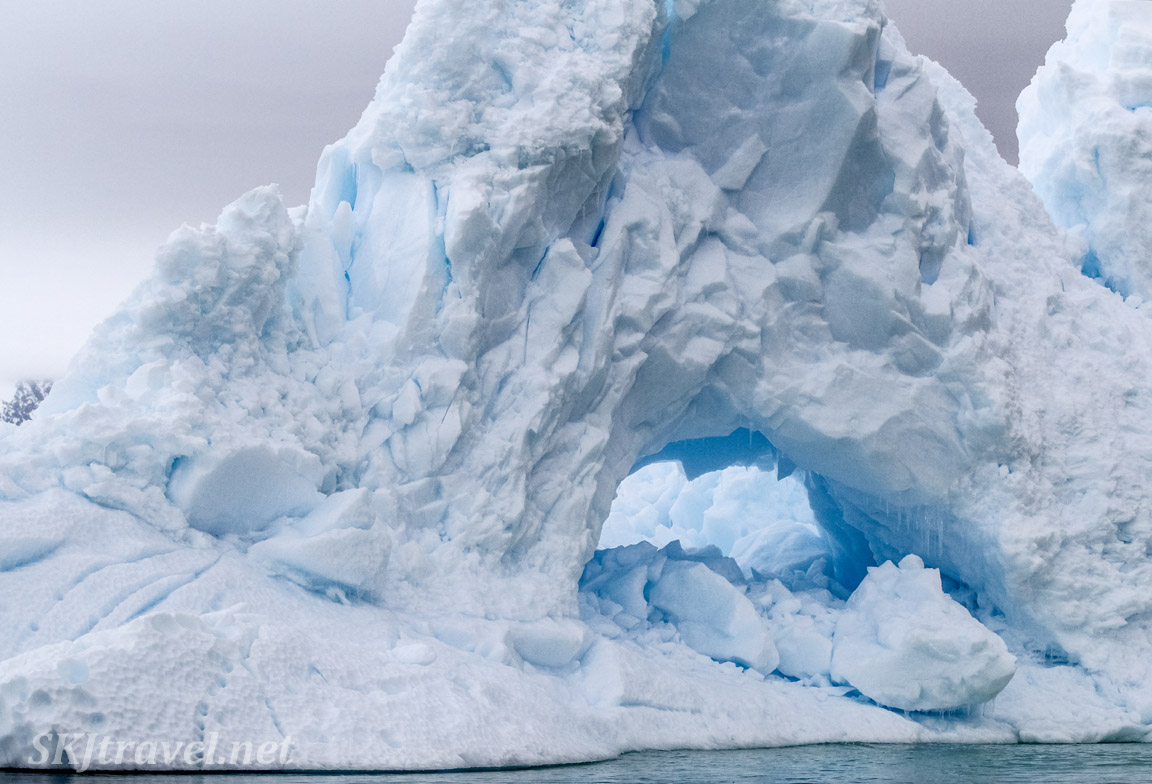 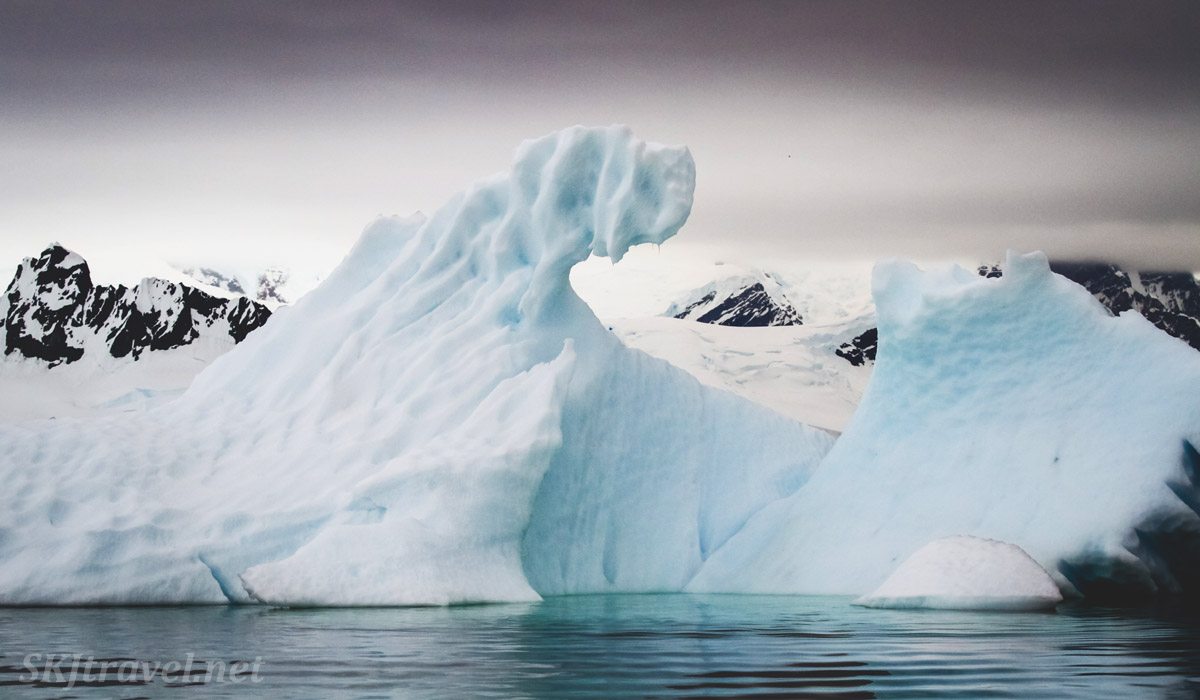 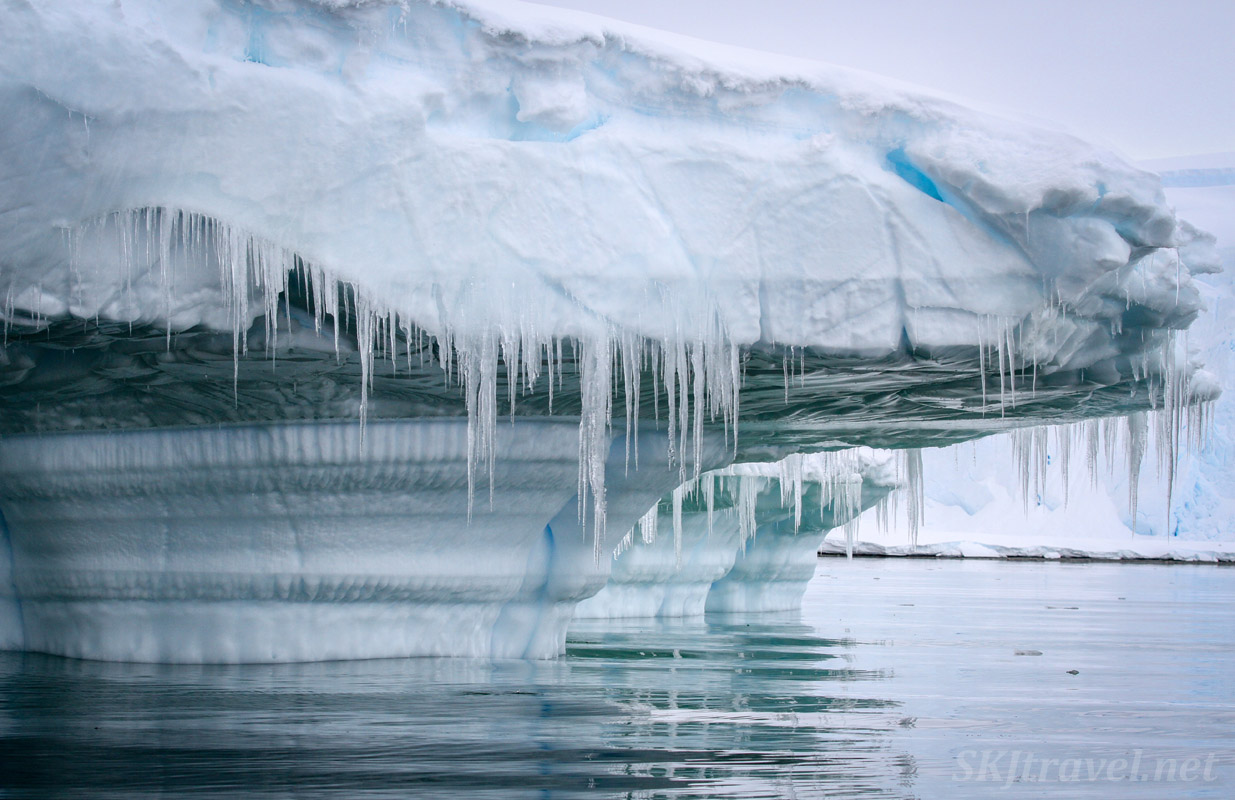 A lone penguin at the edge of the sea ice extending out from the land in Wilhelmina Bay. I think he is saying to himself Bug Bunny's famous line, "I knew I should have made a left turn at Albuquerque." 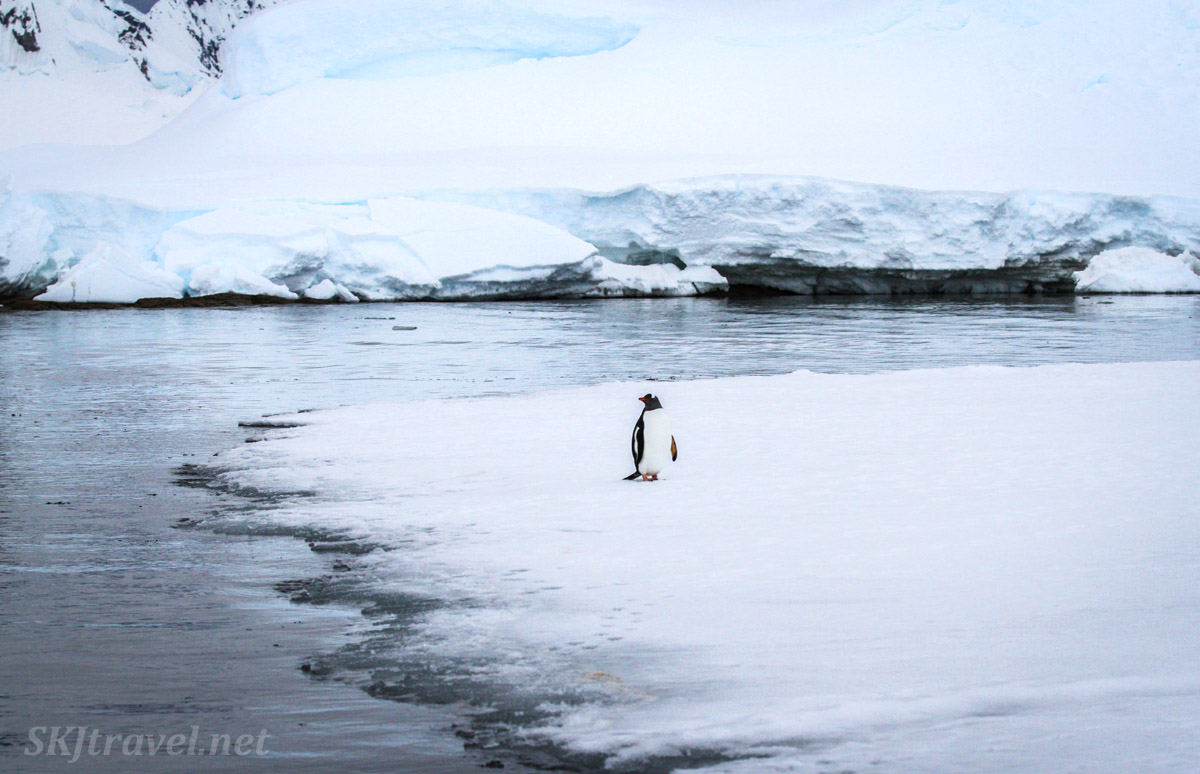 We also had some visitors right next to our zodiac! These seals surfaced very suddenly right next to us; it was kind of a miracle I got my camera up quickly enough to get a photo in. 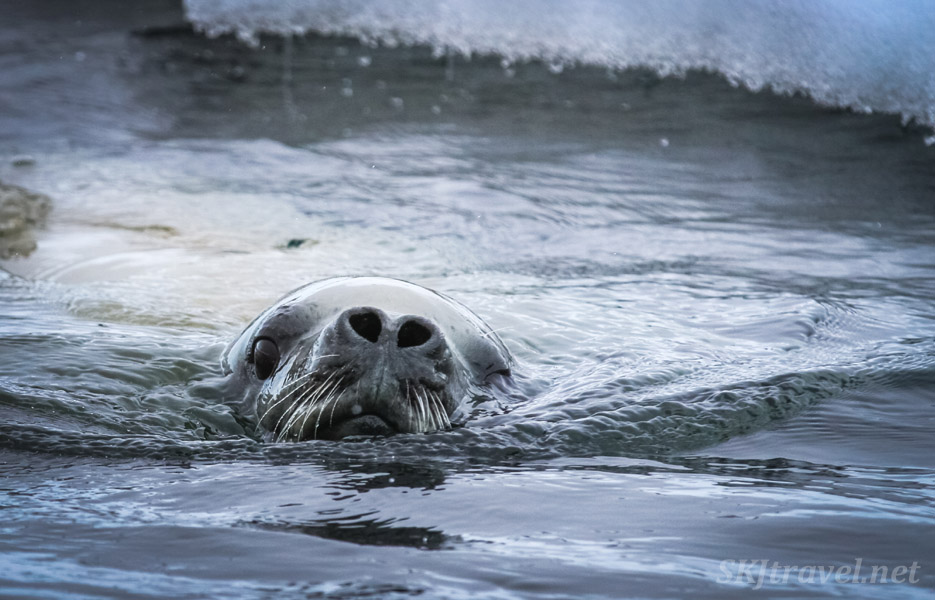 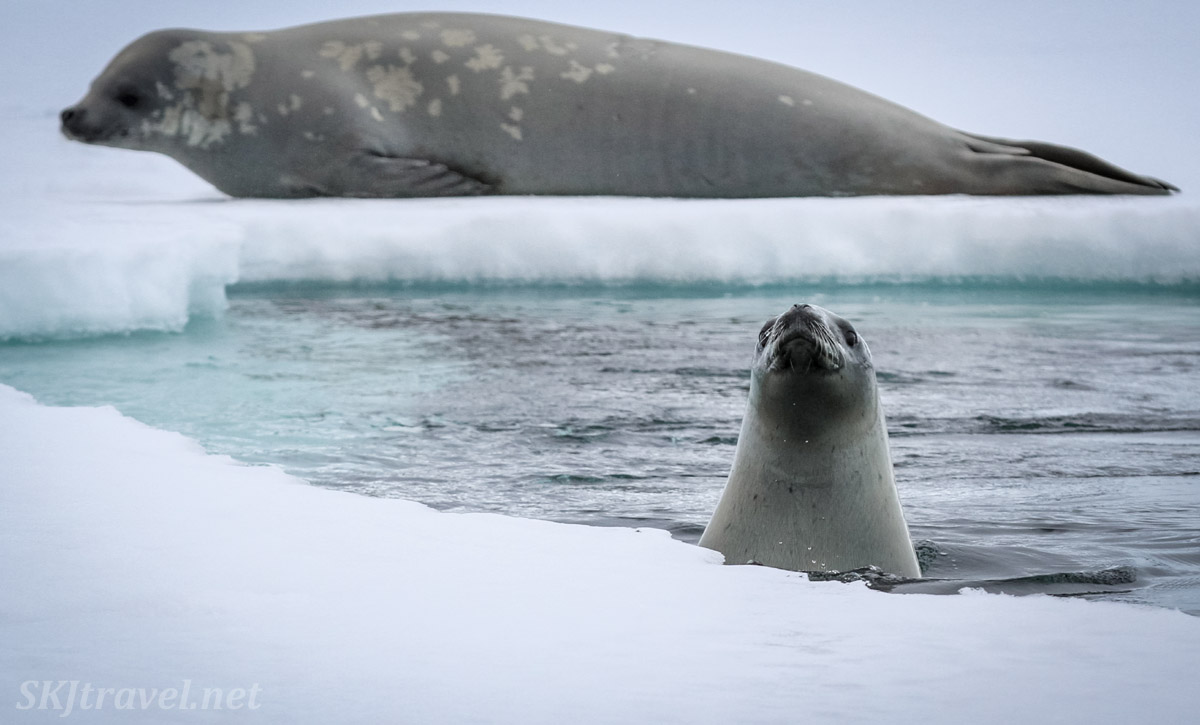 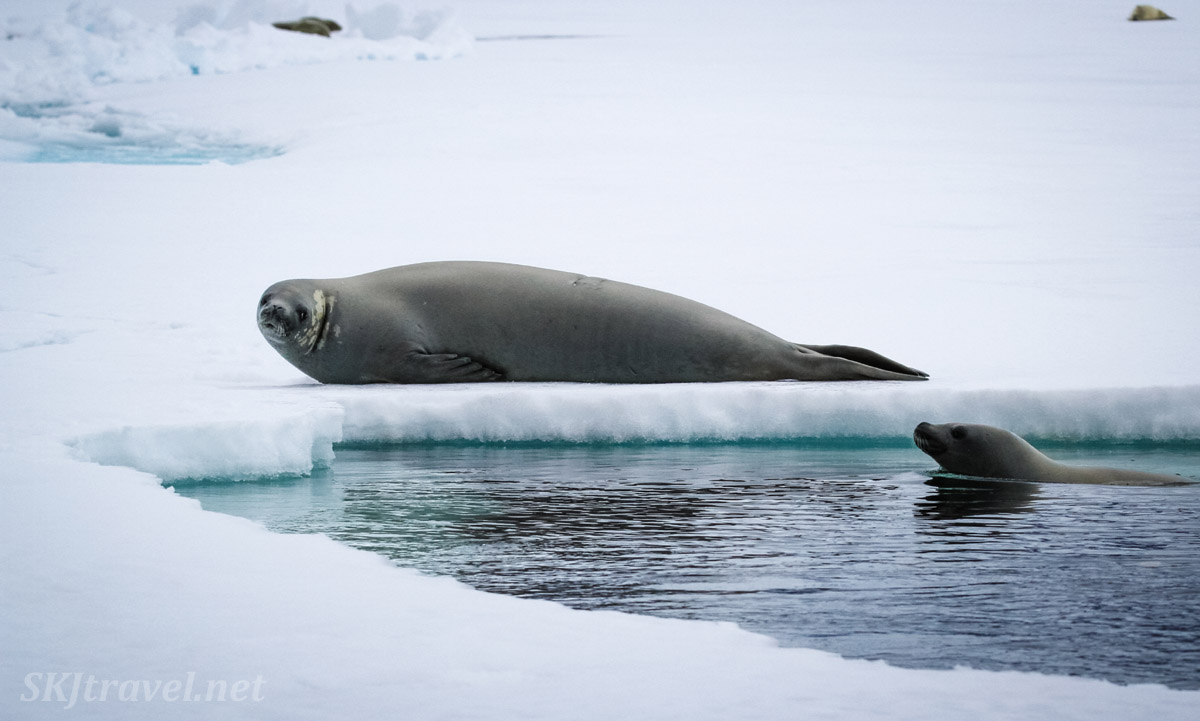 I also wanted to remember the funny behavior of the seals and wrote in my notes for that day, "Three seals right next to the zodiac, one hopped onto the ice sheet and inched his way back, the way seals do, awkwardly flopping across the land. Then he rolled around on his back as if he had an itch he was trying to scratch on the ground, squirming and wiggling. Then he would stop that and do a very slow log roll. Then squirm again, then log roll, over and over several times." 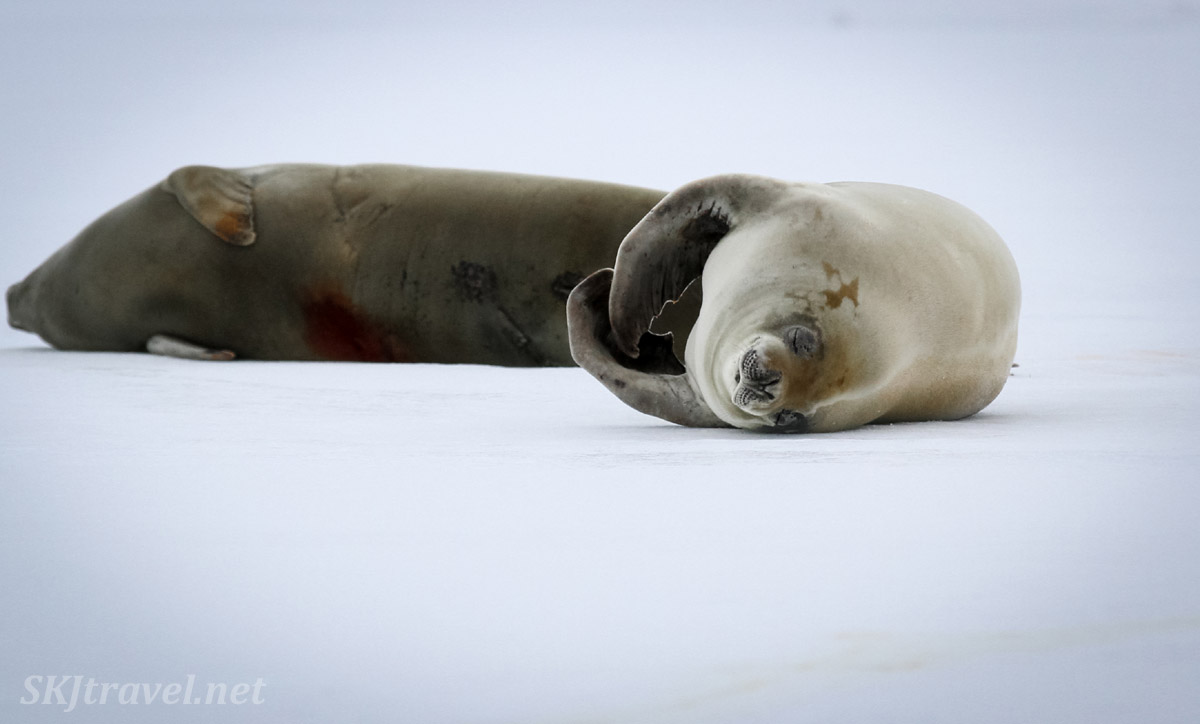 Seals were a fairly common sight on both ice and land. I'd only ever seen wild seals on the pier at San Francisco, so this was quite exciting to me. I especially loved them on the ice. For, like the penguins, this to me is their iconic and unique habitat. Here are a few more we spotted on the ice or in the water on other days. 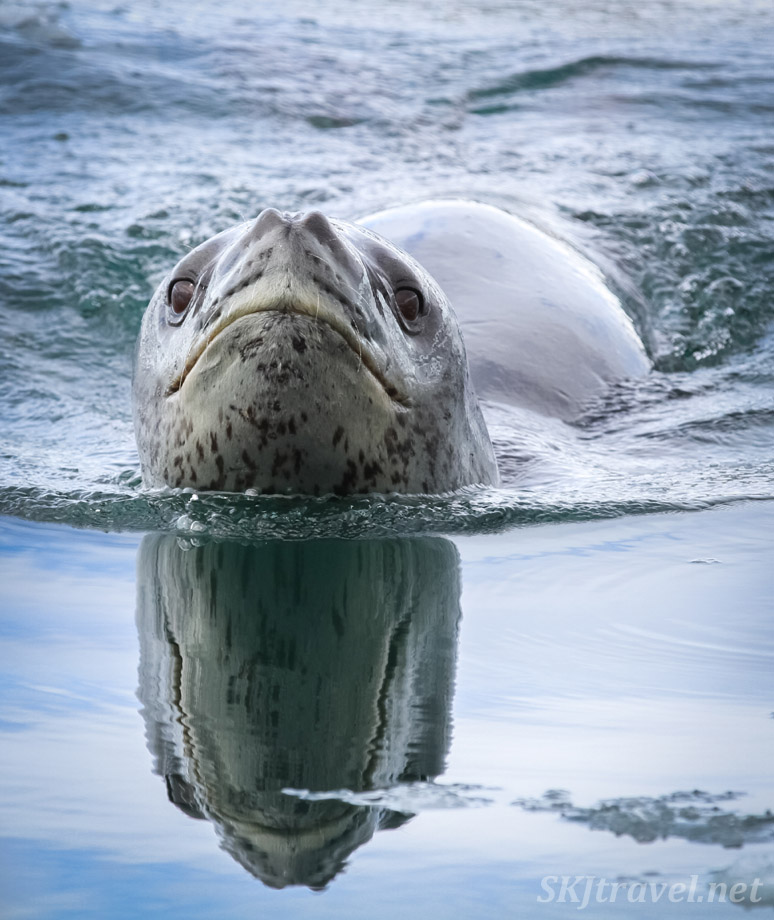 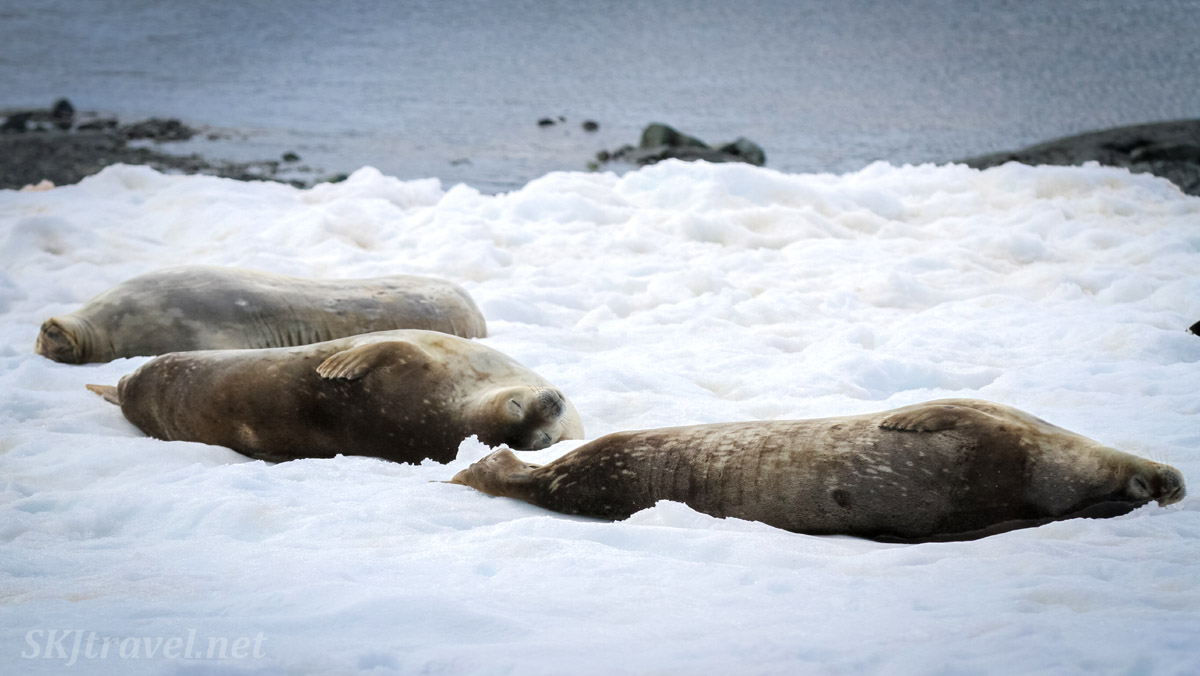 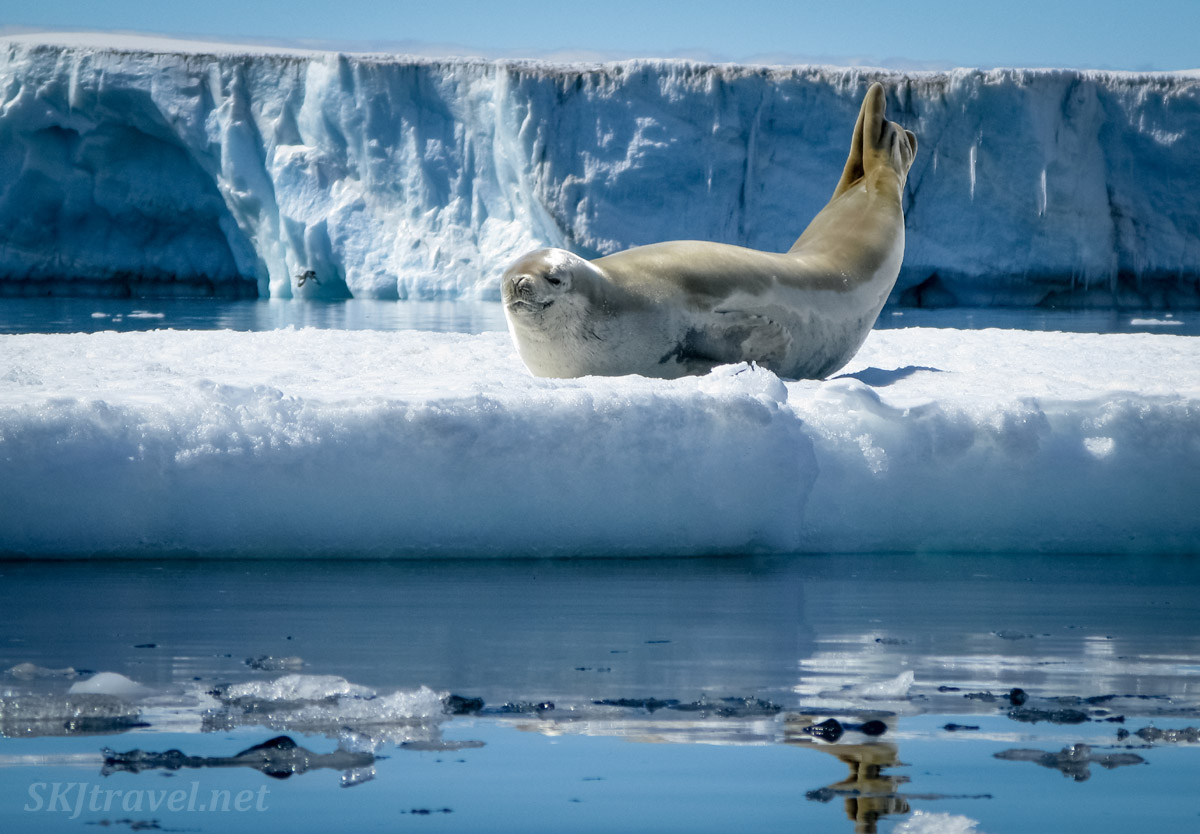 The most prized sighting in terms of seals was the leopard seal. This was one of the things that if a zodiac saw it would radio into the other ones to come over and check it out. They're not too common to see, unlike the common crabeater seals and weddells. If I remember correctly, we saw three. 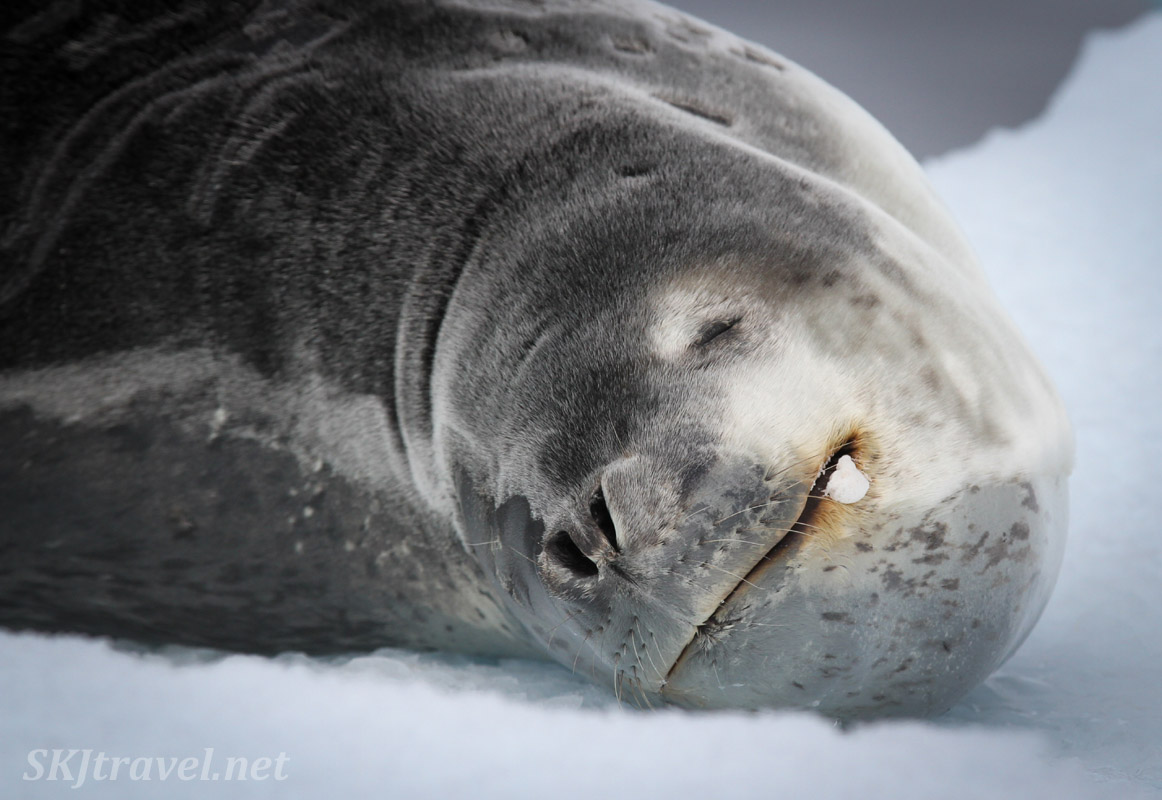 Show us those pearly whites! Er, those kind of yellow, vicious-looking things. Wouldn't want to get my hand caught in there! 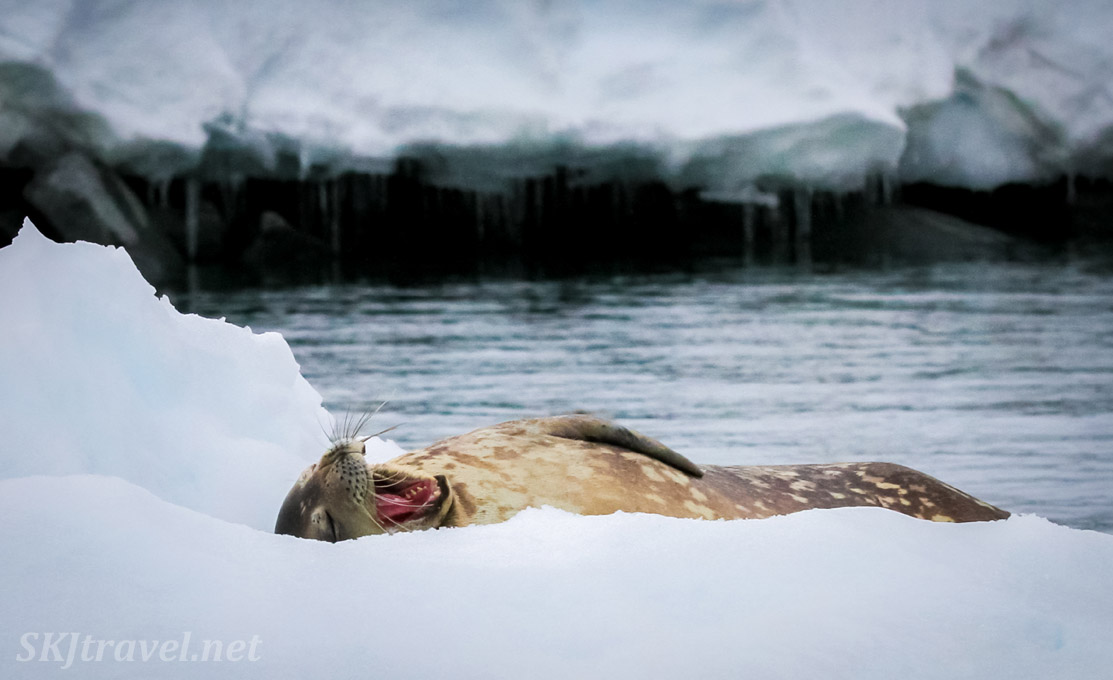 A few more icebergs from other random locations during our Antarctic journey that I think are pretty cool: 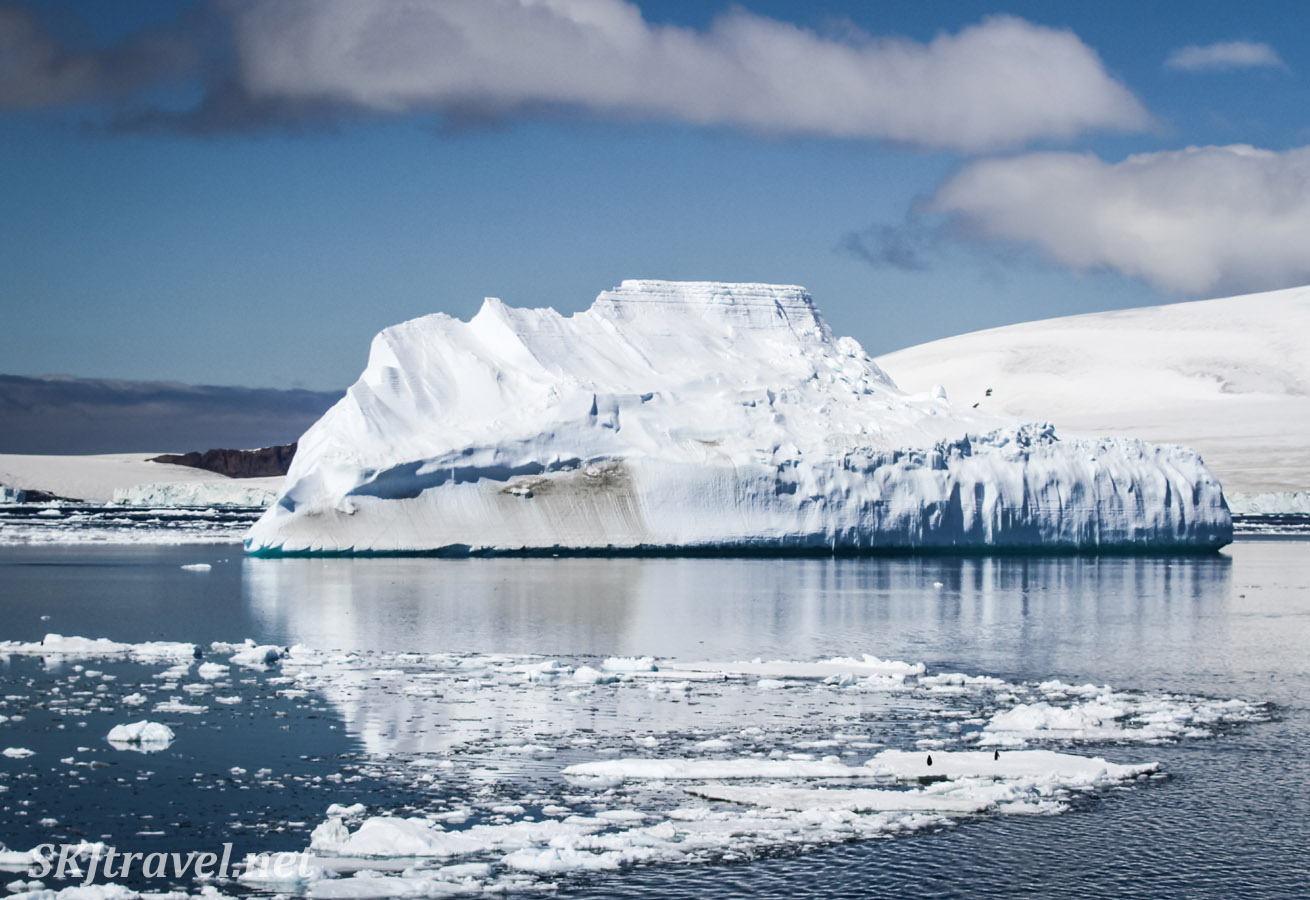 Here's another shot that illustrates that interesting lighting I like with darker colors in the background and lighter-colored ice in the front on the gray water. 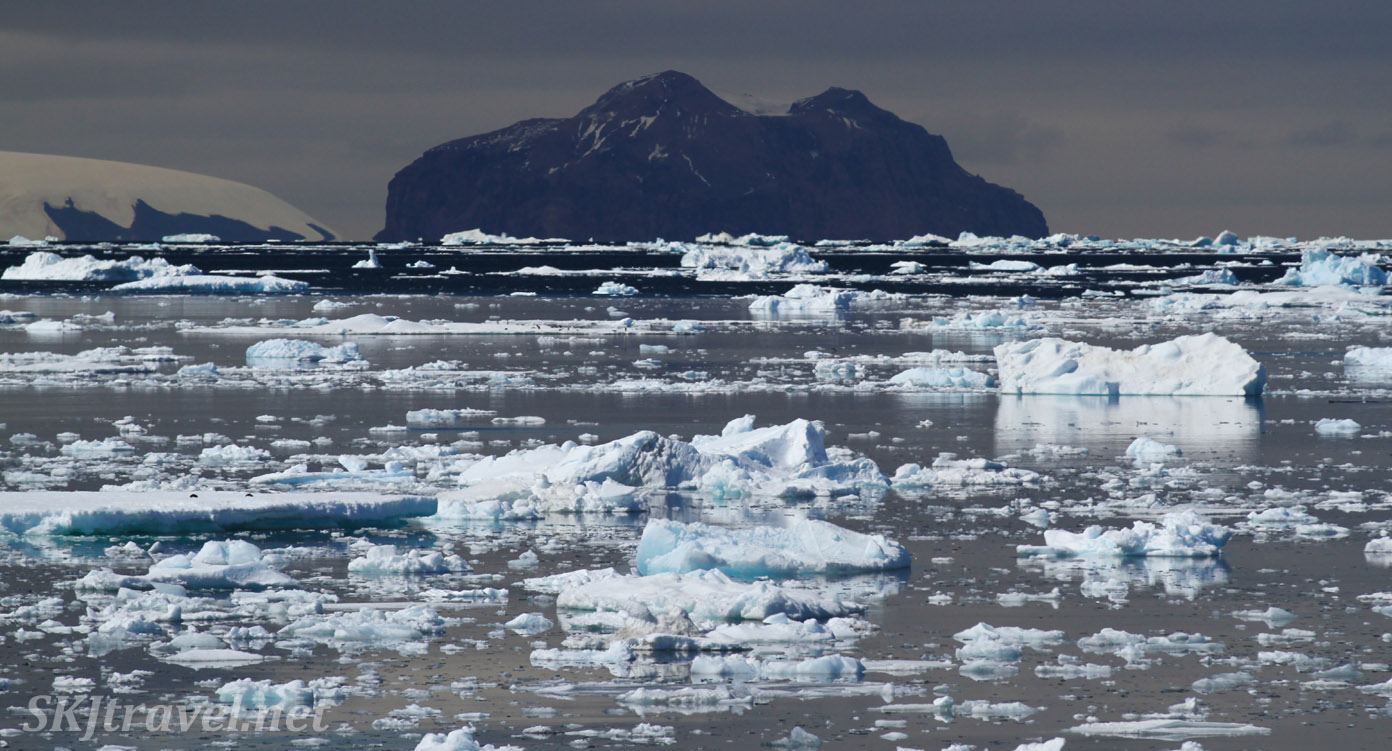 I'll close out this look at icebergs and some of the life found thereon with my faves ... those silly little penguins on a chunk of floating ice like a couple of bowling pins ready to knock down. I'm looking down on them from the ship's deck. You can see how the ice of the icebergs is extending down into the water in the light blue and aqua coloring of the water. I like this pic also for the contrast of the vibrant blue and the crisp bright white. Obviously on a gloriously sunny day! 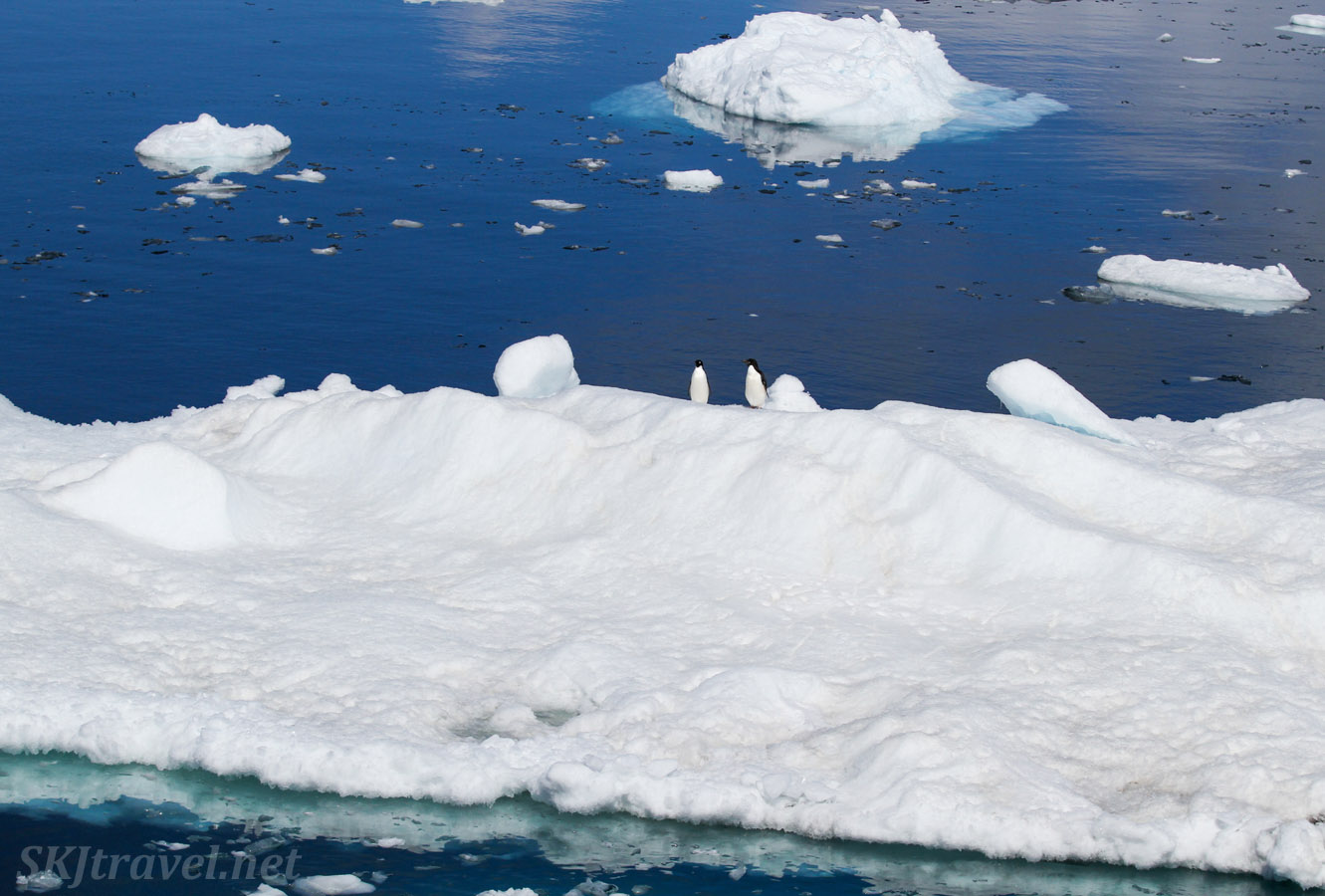