I love visiting cemeteries all over the world, and some of the most humble ones are here in the gold- and silver-rush mountains of Colorado. Lots of simple wooden markers and crosses mixed in with higher-class and better-weathered stone ones. Some of these old cemeteries are still in use with new burials yet today. The expansive Evergreen Cemetery in Leadville is one with this interesting cross-section of types and classes of markers, there are even rows and rows of nothing but divets in the earth, no markers remain at all.

Compare this to the city of mausoleums we saw at Recoleta Cemetery in Buenos Aires, where even the poorest resident lies in eternal opulence compared to these simple forest graves. But I think it's interesting how different cultures, countries, ecosystems, societies, take care of their dead. Another interesting story behind a tombstone, should you be interested, is in my Tuesday Tale about Papa Dang's Grandfather.

Reading some of the headstones in the Evergreen Cemetery prompted me to look up some of the history of Leadville that I wouldn't have otherwise known about. It was late in the day when we arrived, purely by randomness, just driving back from exploring around some lakes. I had actually read about it and wanted to try to find it, but as so often happens to us traveling, we happened across it without looking. But because of the hour we didn't spend a whole lot of time there, I could certainly spend more if we find ourselves back in that area.

The graves are scattered through the pine trees. Something about this grave touched me in particular. It's spooky, it's lonely, and yet somehow victorious, still attesting to someone's life so many years later even though that person's name is long worn away. 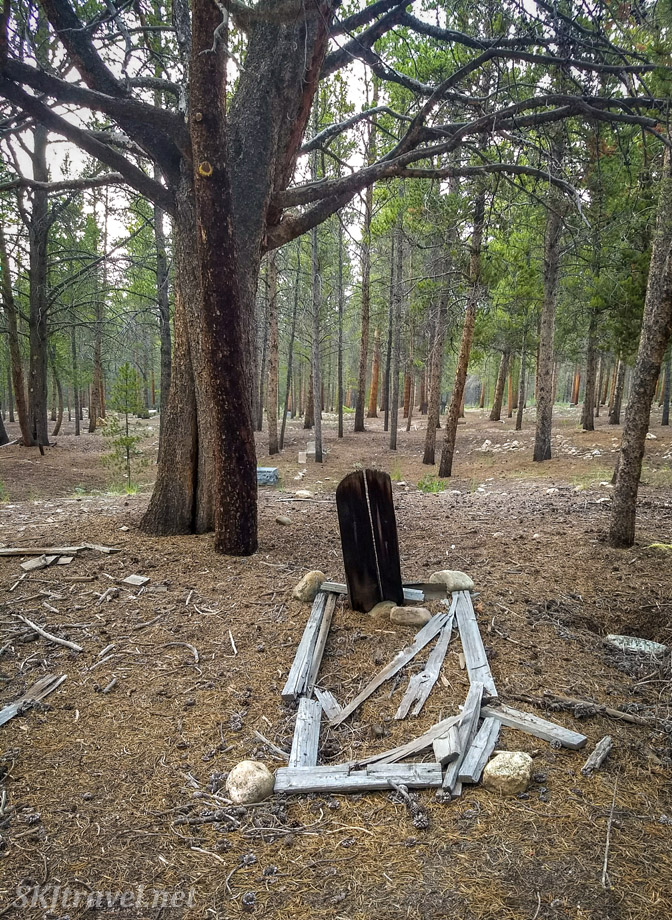 I am drawn most to the old wooden markers. You can still make out the last name on this one, not sure about the first. I wonder about the trees inside the box ... I presume they grew after the grave was dug. Probably a fresh mound of soft dirt made for a good sprouting spot for a couple pinecones. Somehow it makes me happy for this person that he/she has some living company inside the representation of their death. 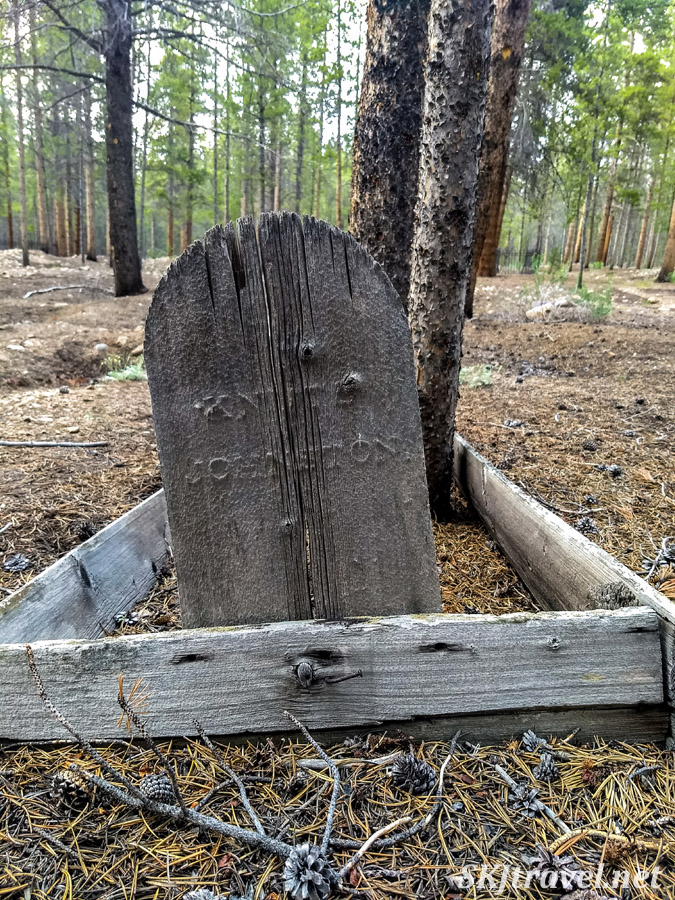 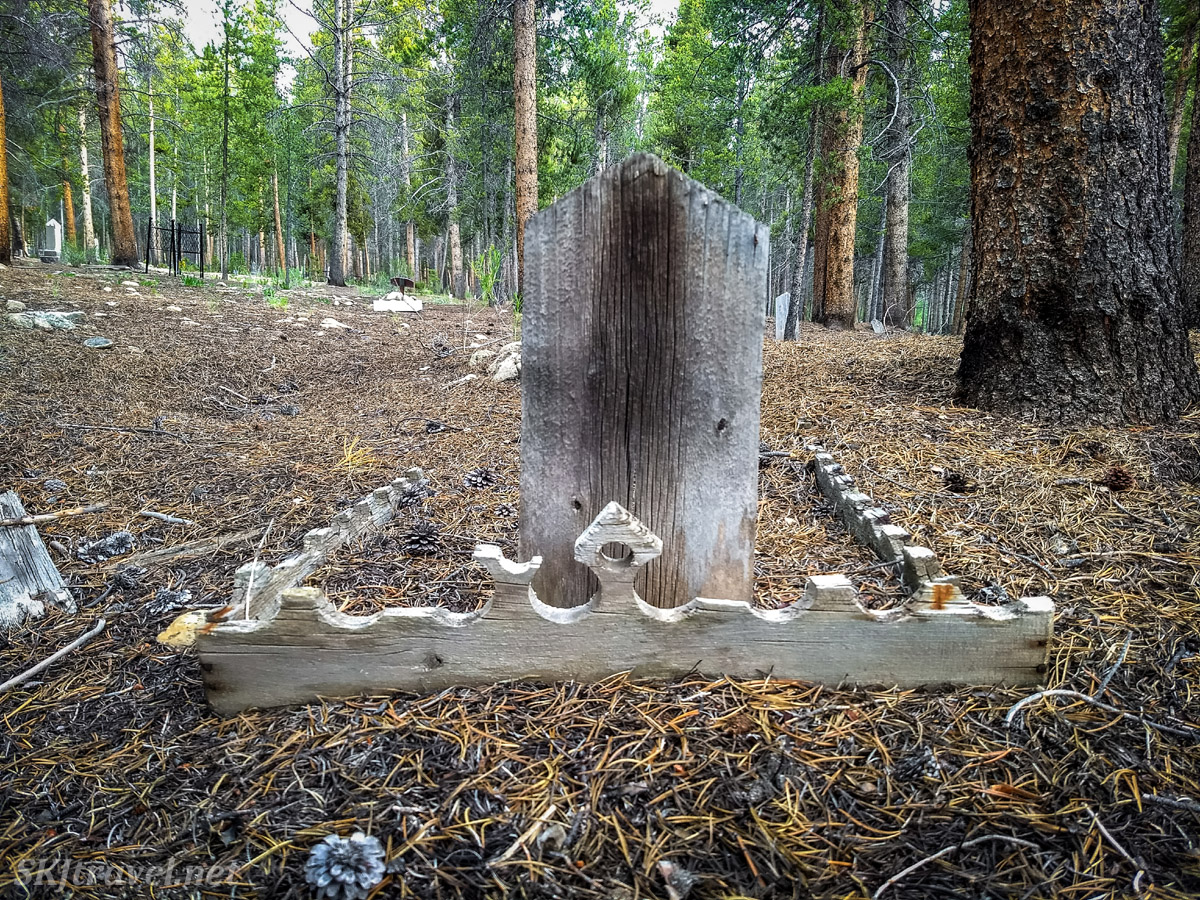 Noticing gravestones and markers led me to investigate some history once I got home to learn more about who and what was referred to, such as the monument below referring to the Homestake Mine: 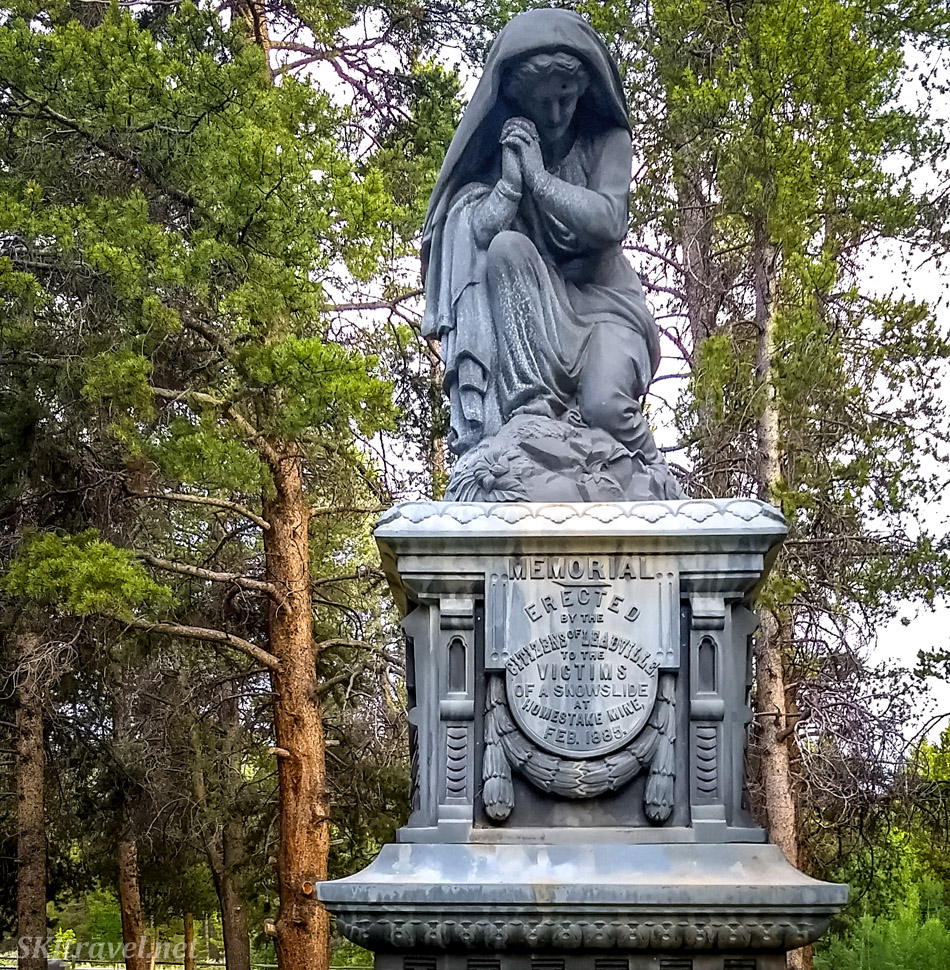 Sourced from the Colorado Central Magazine website: In February 1885 ten miners at the Homestake Mine 15 miles northwest of Leadville were killed when their cabin was engulfed by a huge snowslide. Their remains went undiscovered until late April, when two locals, curious as to why the miners hadn't been seen since mid-January, hiked to the site and found the cabin, outbuildings, and mine entrance covered by snow.

A 1948 Rocky Mountain Empire Magazine article states that a letter was discovered in the cabin rubble, written by victim Horace W. Mathews on Feb. 21, 1885. "Snow, snow, snow! Will it ever stop?" Mathews wrote with haunting irony. He went on to describe mining as "certainly a dangerous and uncertain business, but there is something about it which draws a man on, ever hoping to become rich suddenly." The letter's date, along with Mathews' alarm clock, which had stopped at 12:25, indicated that the slide probably occurred around February 22.

The Leadville community raised funds for an elaborate funeral service, businesses closed to honor the dead, mines closed to allow workers to attend the rites, and in September 1886, this memorial was raised in Evergreen Cemetery.

And after spying the gravestone below, I wondered what happened at the Wolftone Mine. 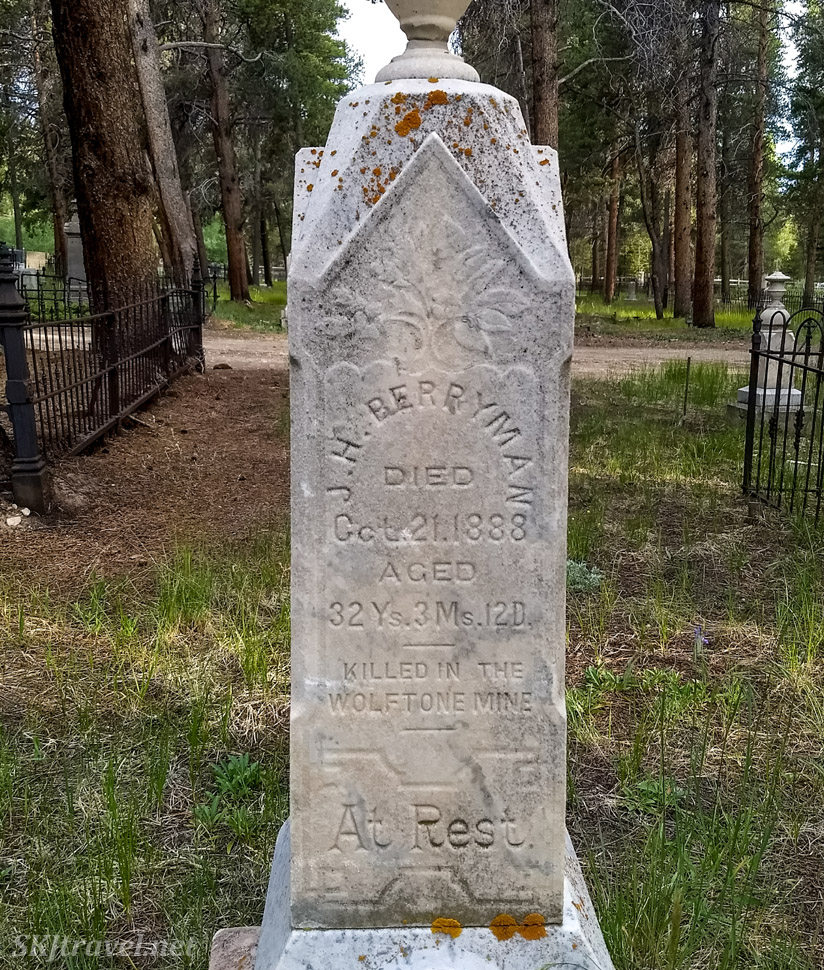 What happened was two miners, one being J.H. Berryman, were taking out old timbers in the mine, hauling them up in the cage that descends into the shaft to carry miners down and up. It was theorized that the timbers the men were bringing up must have slipped and caught in the cribbing. The engineer operating the cage felt the jar and stopped hoisting. He waited for a bell signal from the two men, but got none. So a bucket was lowered with a man in to check on the miners. Sadly there were but two mangled bodies underneath a pile of timbers.

An inquest was held to determine if the Wolftone Mine was at fault in deaths. Although it was ruled merely an unfortunate accident, the Wolftone bore funeral expenses for both men.

Now this tombstone below got me super curious, "One of the first settlers in Colorado in 1858." As you may have read in one of my other articles on Colorado's mining history (such as THIS one), 1858 was the year of the first big gold rush in region. Colorado was not actually a state yet, that came in 1861. Where did he come here from and what did he do ... pan or mine gold, or come on the heels of miners to provide services in mining towns? 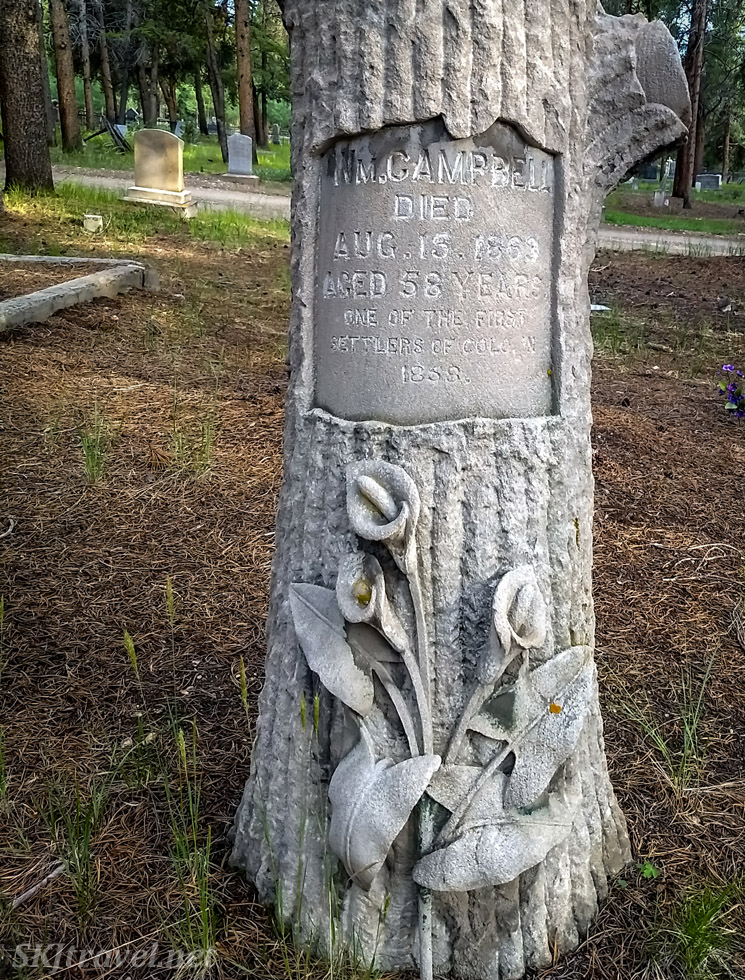 There's a copy of the 1860 census for the area that is now Lake County, where Leadville is located, reproduced by the Leadville Historical Society online. While there is actually a William Campbell listed in it, his listed age is way off. However, this reproduction is prefaced by the historical society as, "This project is dedicated to all of the census-takers who originally compiled the Lake County censuses. Their trials and tribulations were equaled only by their errors and omissions!" I find this humorous. So who knows if it's the same guy.

There wasn't even a cemetery at the location of this gravestone in 1863, the listed date of death. The Evergreen Cemetery was established in 1879 and the graves from the original city cemetery were moved here. Though, one imagines they probably didn't get every body, especially any unmarked graves.

I saw several similar gravestones that all had "erected by the Woodmen of the World" engraved at the bottom of them. I thought maybe this was an organization like the Freemasons or something. I looked it up ... all these tombstones came as part of a life insurance policy offered from 1890 to 1900 by a fraternal benefit society, Woodmen of the World. All things considered, they're pretty nice tombstones to get with what was touted as "affordable" life insurance if you don't mind sharing your epitaph with the name of your insurer. The monuments were ready-made, so when a member in good standing died, the local monument installer had simply to carve the deceased’s info onto the blank space. 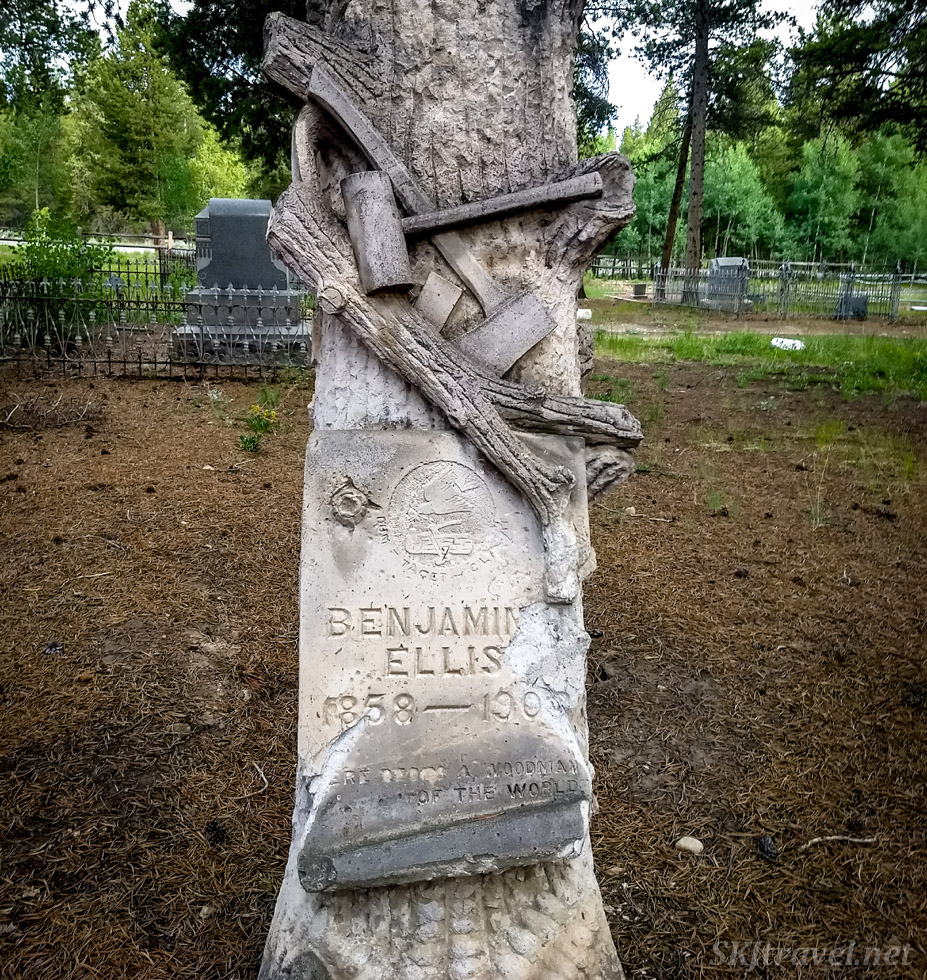 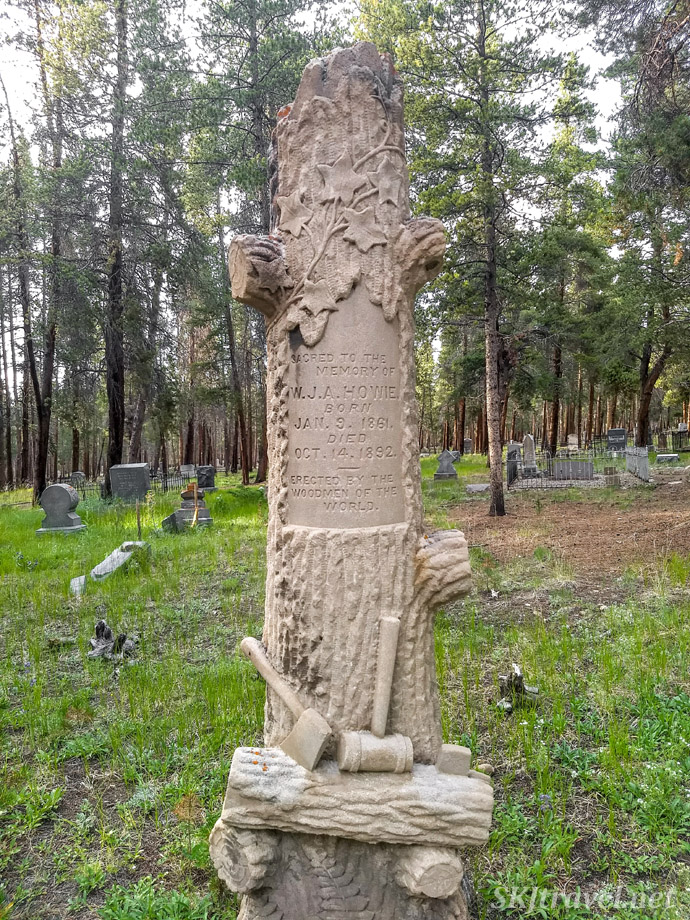 In all the mining town cemeteries there is a significant presence of Freemasons, always with their own section within a cemetery. The symbol at the top of this tombstone is the symbol of Freemasons. I like that his birth town is listed, that's one bit of curiosity satisfied (yet only a tiny bit). 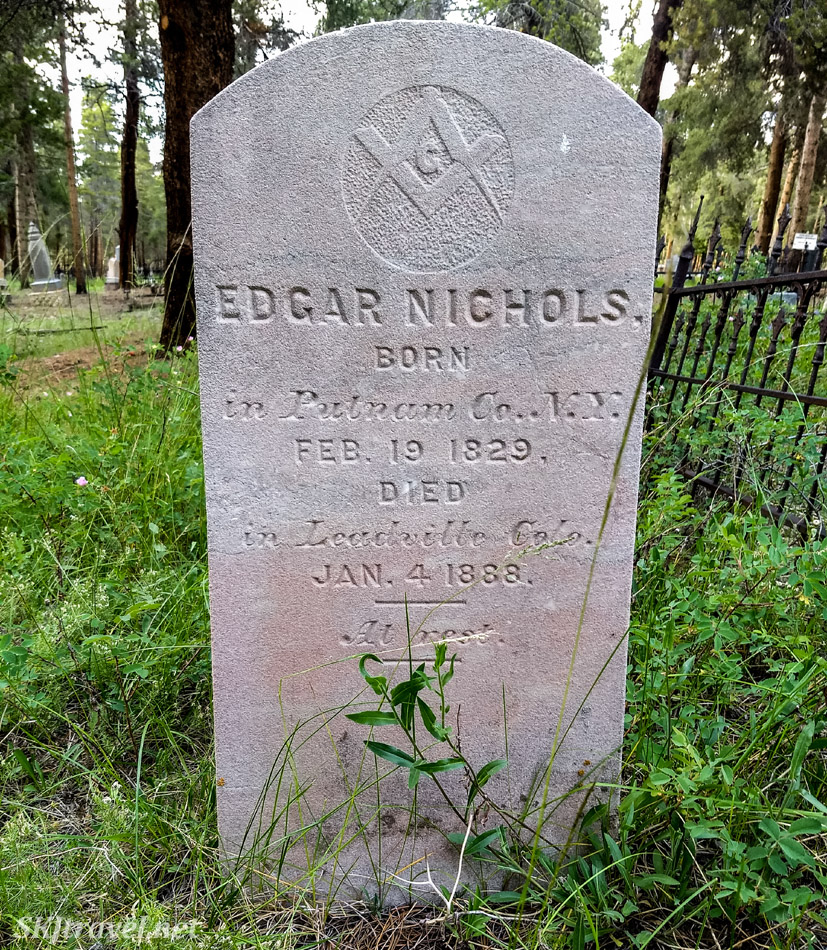 A couple other graves I found picturesque ... the first one because of the spots of lichen. 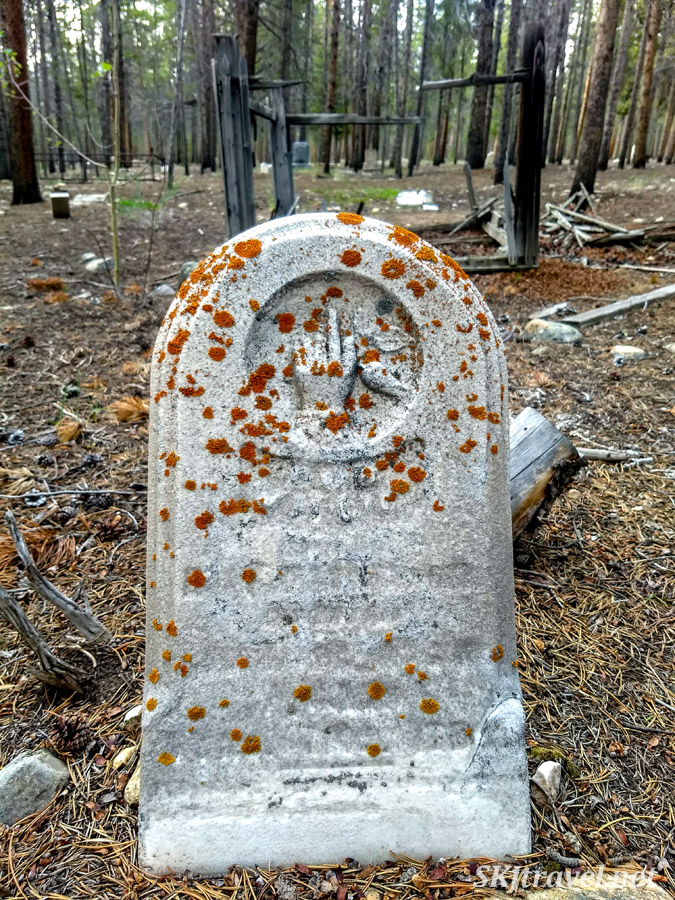 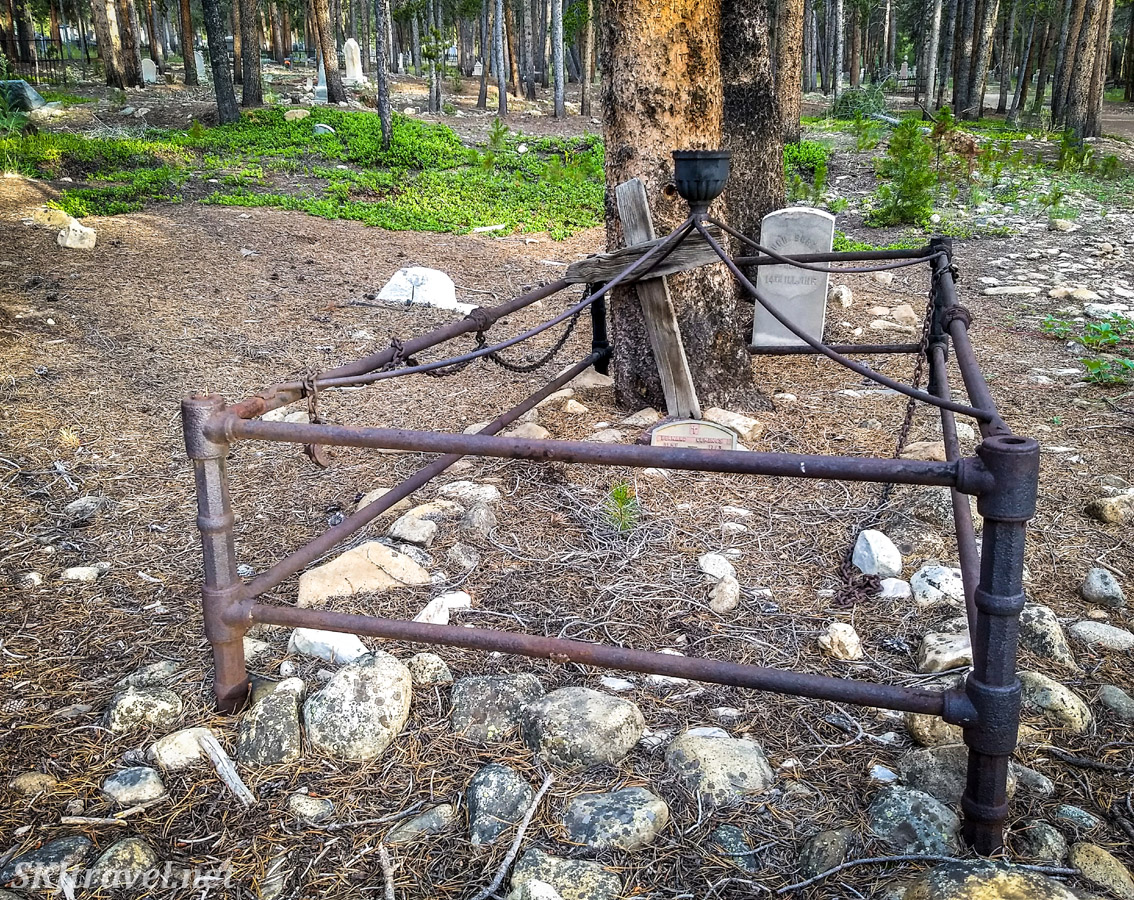 And of course there are the babies — always noticeable in these old miner's cemeteries because the cemeteries are often relatively small and the baby markers relatively numerous, the ratio of adult to baby graves stands out. 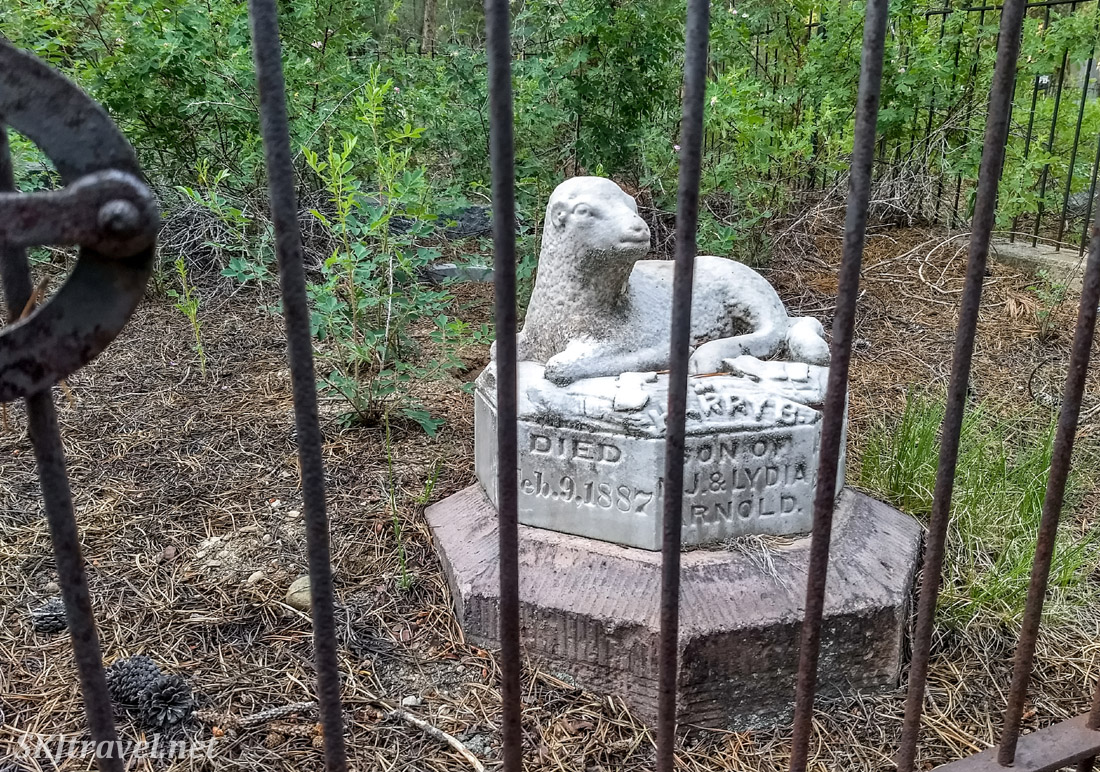 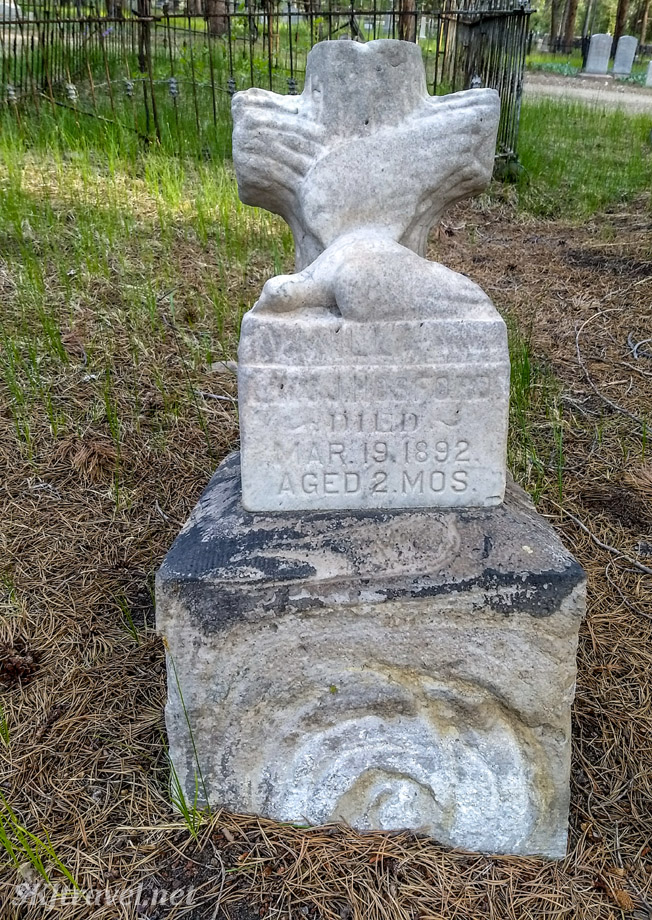 For all these graves with headstones, even for some of the shortest lives, there are yet an estimated 1,300 unmarked graves of Irish immigrants in the Evergreen Cemetery. You can see below what this section of the cemetery generally looks like — rows and rows of sunken rectangles as the only evidence of the bodies laid below. It's rather creepy, actually, this anonymous field of bones. The pine caskets and small wooden markers long ago rotted and decomposed. 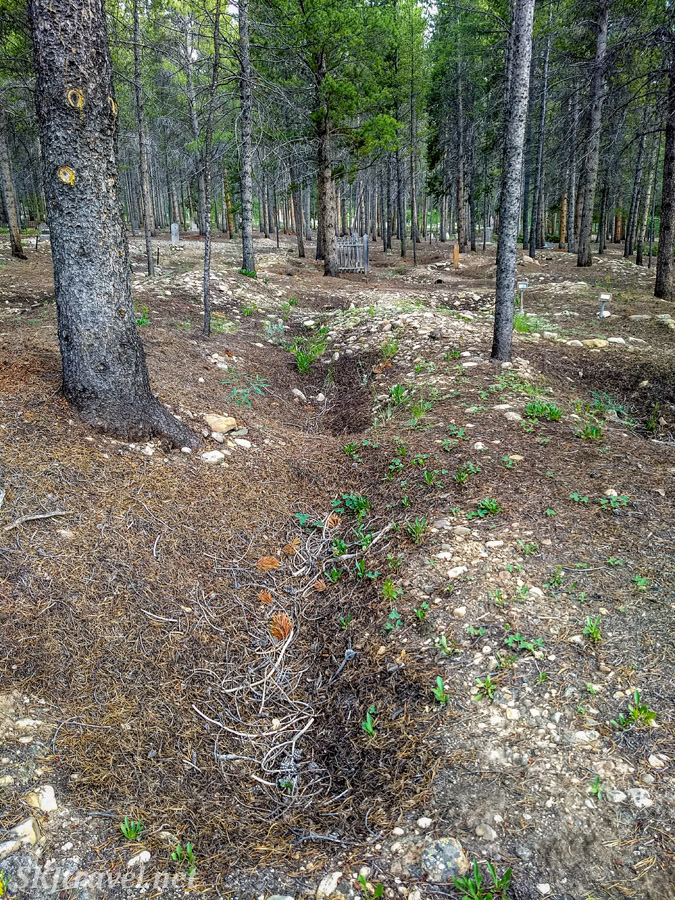 A memorial to these Irish immigrants is currently under planning and fundraising. As planned, a spiral pathway will lead to the top of a mound where a sculpture will sit, reminiscent of ancient Irish burial mounds. The names of each person in the plots will be carved into glass walls or onto plaques. Their names and ages can be obtained thanks to Catholic Church records.

The Go Fund Me page for this memorial makes some poignant statements about these individuals:

"They made their way across North America during the late 1870s and early 1880s, to one of the greatest silver rushes in North American history [knowing there would be jobs for them]. There, they found themselves segregated to Leadville’ East Side, working the mines and smelters at ten thousand feet above sea level. Their wages were three dollars a day, their shifts ten hours. These were desperate, transient, uneducated, unskilled, and mostly young people. The poorest of these immigrants, without any resources or family, were buried in the 'Catholic Free' section of the cemetery, with a crude wooden slab to mark their burial. The average age of death of those buried there is twenty two. Half of them are children twelve years old or younger. These were the children of the famine generation, those orphaned, exiled, and cast adrift in North America. ... By naming them, we are centering the intense trauma and suffering that this generation of Irish immigrants brought to North America."

As I mentioned, we only had time to explore a portion of the cemetery. You can see from this map at the entrance how extensive it is. We hope to find ourselves back in the area in the future and will spend more time here. 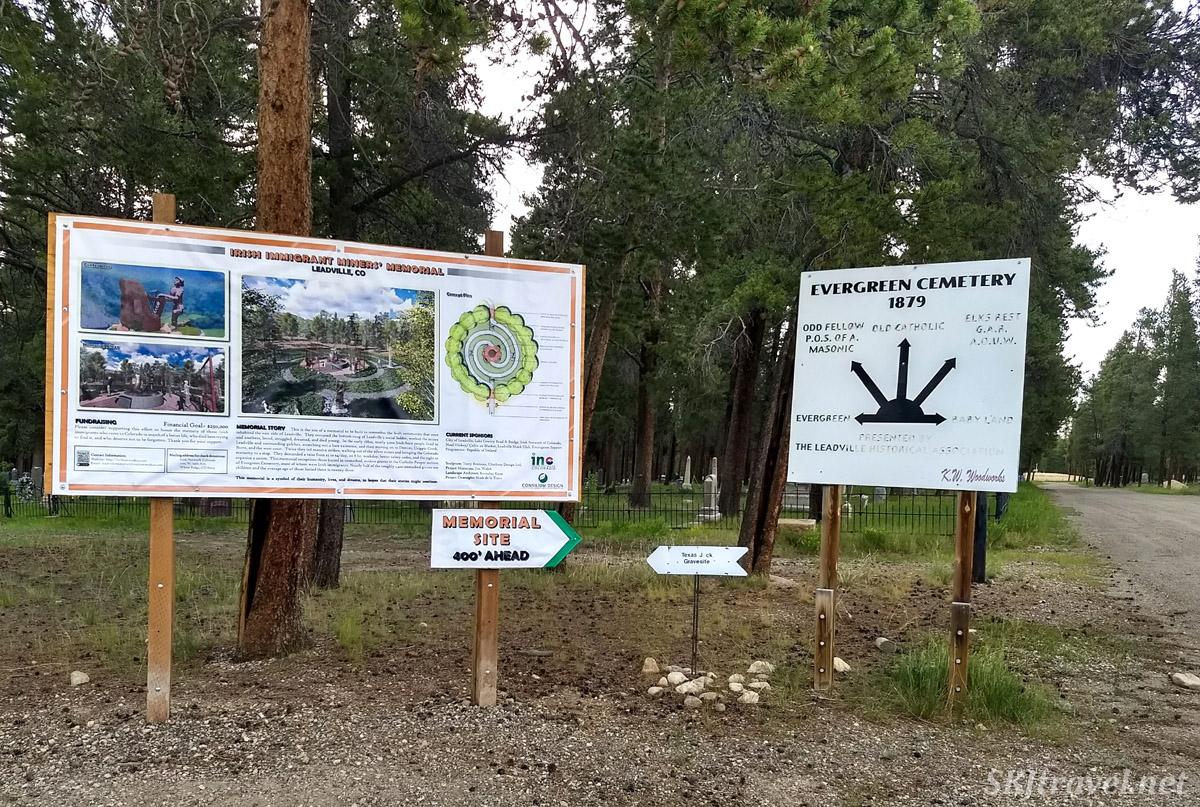