I joked about it on Facebook, but now it's come down to actually making a post called Mosque Madness. There are just so many picturesque features in the mosques in Isfahan. I found it very difficult to whittle down the photographic offerings to a reasonable number. I ended up with so many that I decided to simply give them all their own space together. Also, I am running short on time and I can tell you that I won't complete my Iran posts before I leave for Namibia. So will have to finish when I return. There should be a total of three more posts from Iran coming your way. Meanwhile, forgive the egregious lack of text on this one. I could give you historical information on each, etc., but as I'm so short on time, I will leave you to befriend Google if you're interested in deeper knowledge of the mosques in Isfahan. (There will be two more posts from Isfahan, ultimately -- so don't worry, you will get to learn more about this city.)

In the main square in Isfahan, this was once called the King's Mosque (and his palace was right next door), but after the revolution in 1979 it was renamed to the Imam's Mosque. It was certainly built with the distinct imperial flair for size and grandeur. 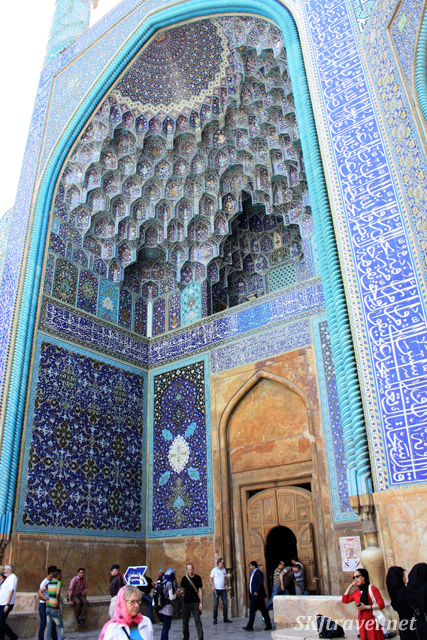 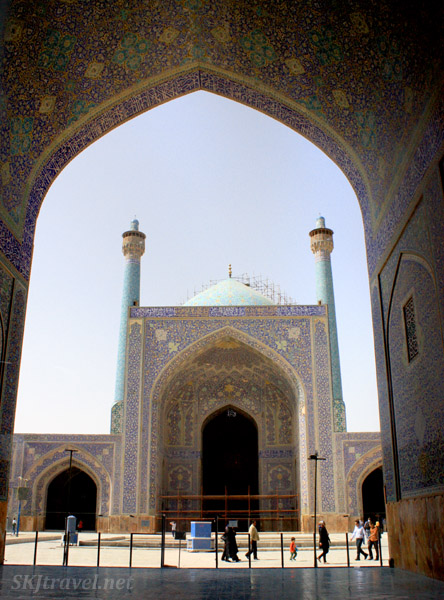 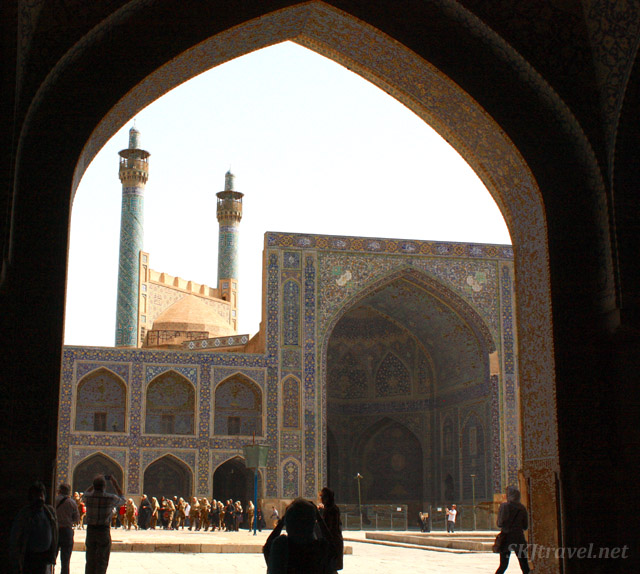 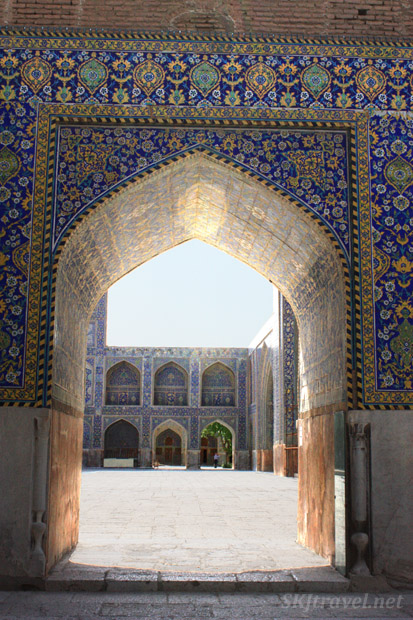 Shall we step inside for a minute? First is a little nook with carpets rolled up in it that can be taken out and unrolled for prayer time. 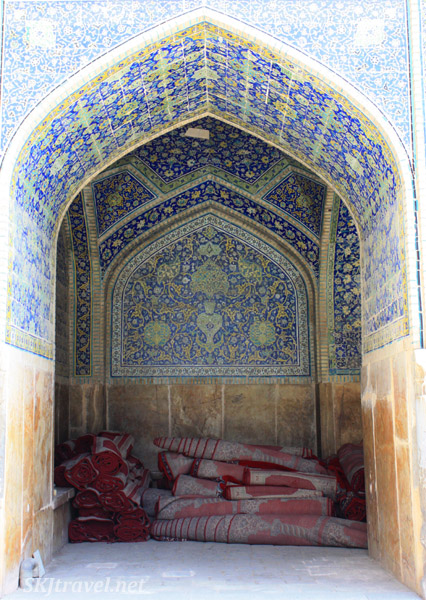 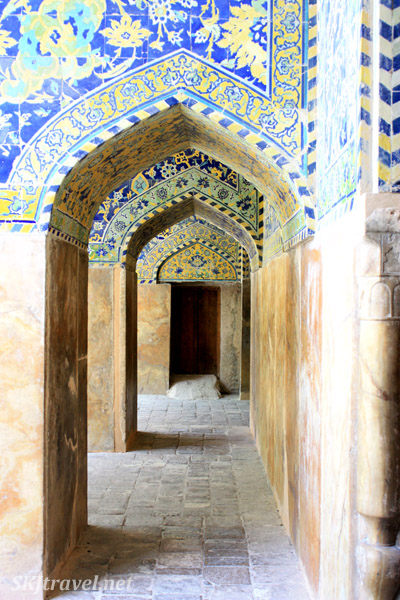 And by the way, we had to time our visits in most mosques throughout Iran to avoid the prayer times. They would close down during the calls to prayer in case anyone wanted to use the mosques for that purpose. One thing that was refreshing was that the calls to prayer were not nearly so loud in the outdoor speakers as they were in Tunisia, where oftentimes the prayers were literally blaring through the speakers into the cities and would wake you up in the morning. We hardly even noticed them here, even when our hotel room was directly facing a mosque. We were also kind of surprised at the scarcity of praying people in the public places during these times, but then we had to remember we were in the tourist zones and locals probably avoided those and went elsewhere. You can find a prayer room practically anywhere in the country. Even gas station rest stops along the highway had them, right next to the restrooms and convenience shops in case you are traveling during a prayer time. Apparently, if you are traveling, you are technically exempt from the obligation to stop what you're doing, face Mecca and get down on your knees to pray. By and large, when we did see people observing the calls to prayer, they were either older or very young (with their parents). The young-adult age-group was conspicuously under-represented. 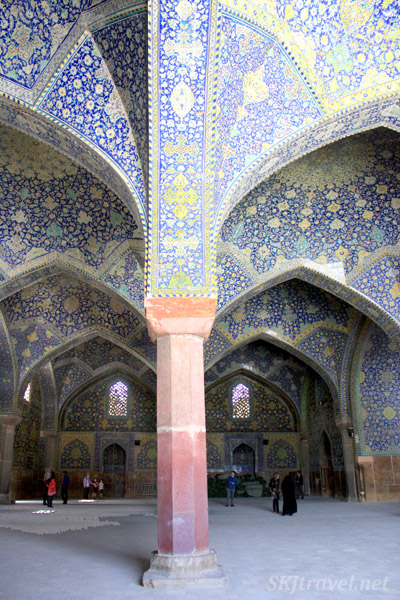 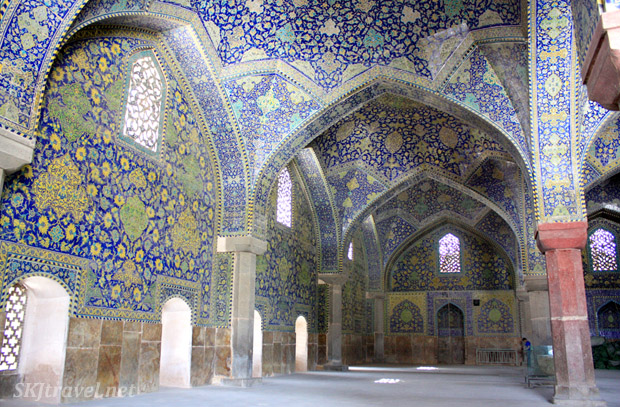 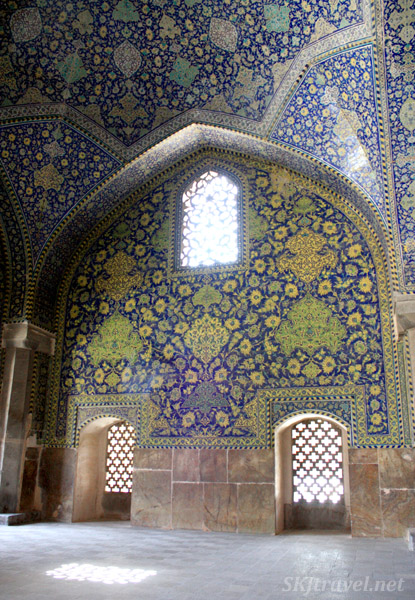 The Imam's Mosque is so huge and cavernous, I'm not even sure how all the rooms are used. I'm quite sure Reza explained this to us, but it didn't stick for long when I was so busy admiring the architecture and the tile-work. The acoustics were carefully designed ... below, Erik is snapping his fingers (well in this photo, he just finished doing so) in a spot that carries the sound all around that huge room. I could stand at the other end and hear the snapping. So a whisper could literally be heard around the room. 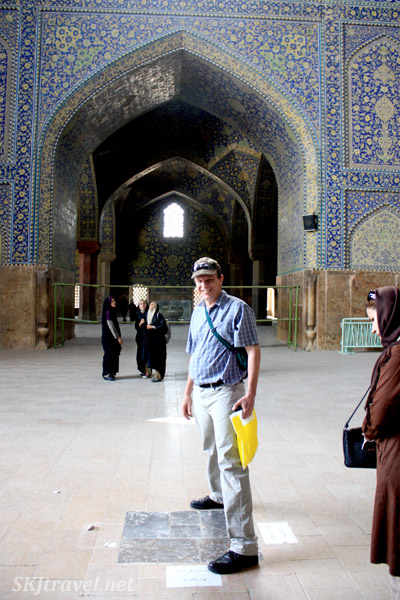 This is the most impressive room in the Imam's Mosque. The ceiling is called the peacock ceiling because when the light shafts through just right, it illuminates a wedge of ceiling in such a way that it looks like a peacock with its tail all fanned out. 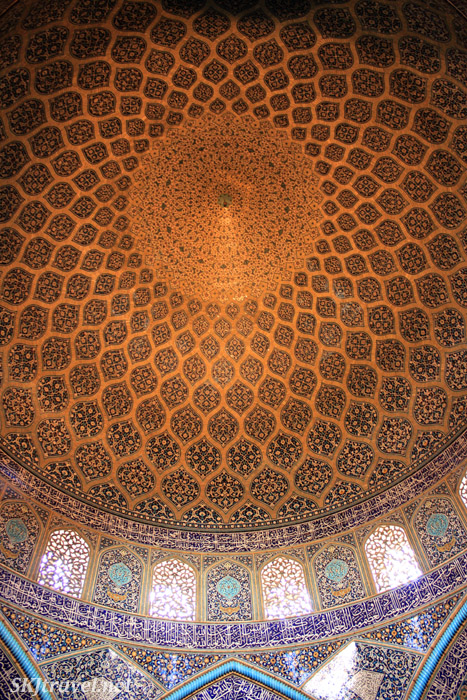 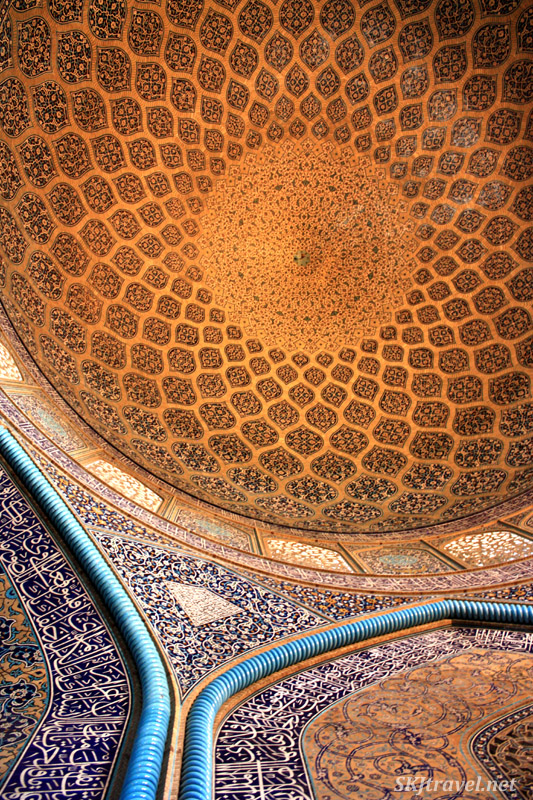 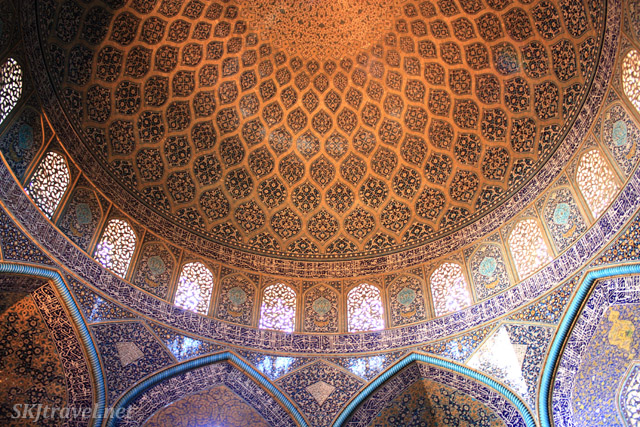 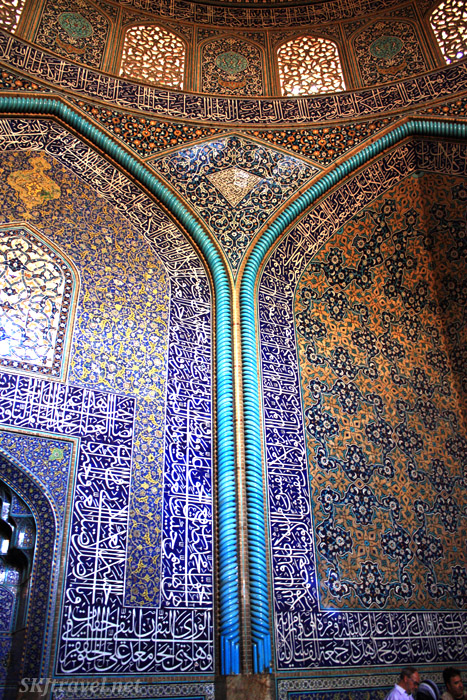 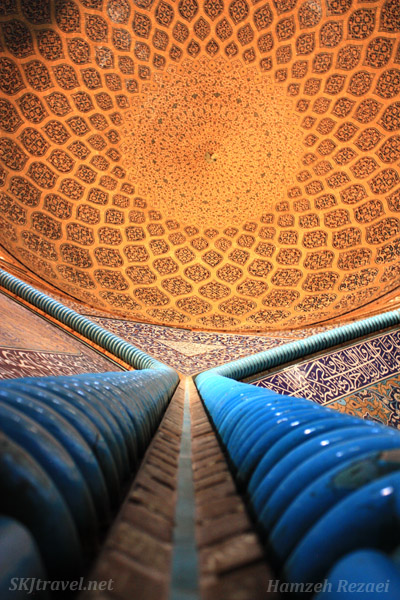 In a pleasant side courtyard there are lots of little doors like the one below, each sheltered in its own little alcove ... smaller rooms that were closed off. Very quaint. And a couple more shots from the big courtyard before exiting back into the square through the gigantic doors with the giant knocker. (check out the lone guy in the second photo below for a sense of scale ... how I managed a shot with only one person in it, I'll never know) 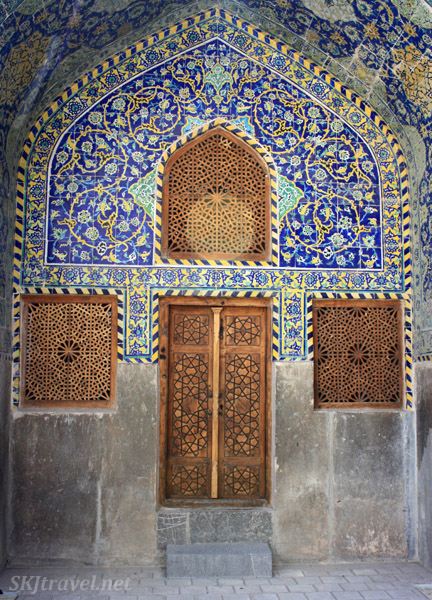 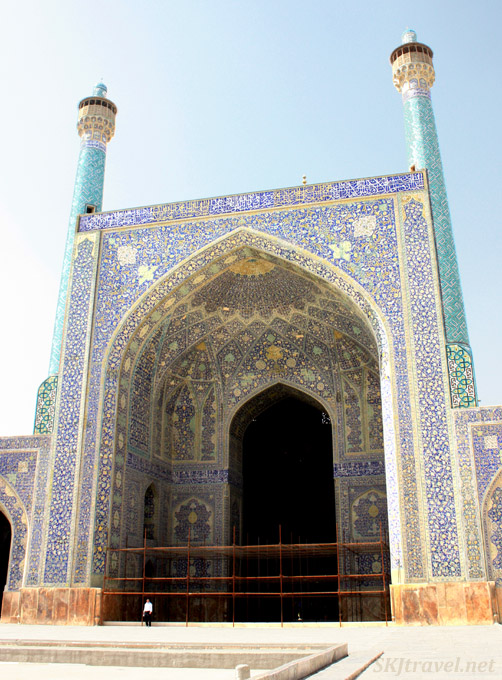 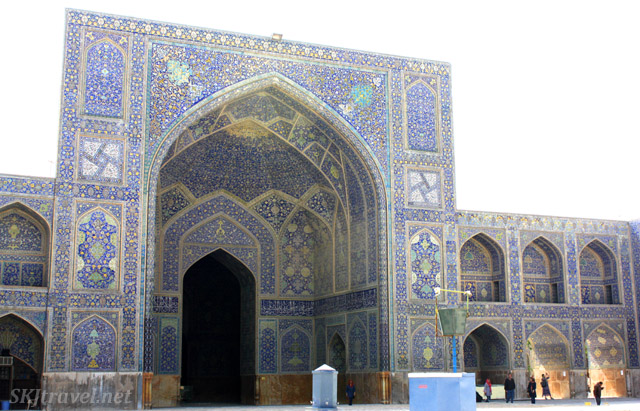 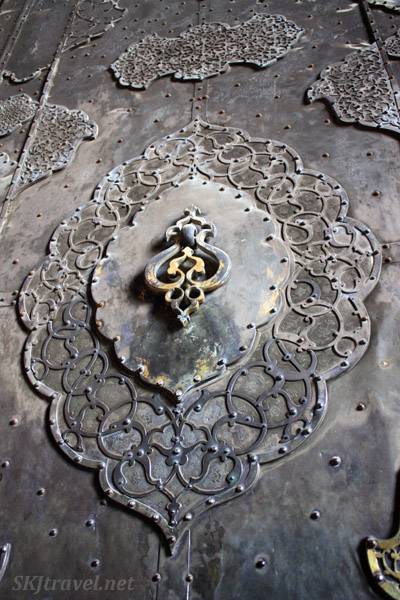 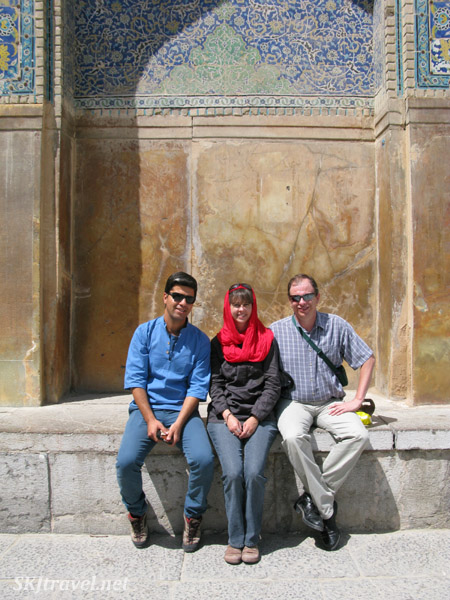 Across town, we visited the much smaller Friday Mosque. One of its unique features was the old part which was left in austere simplicity. Though the intricate colorful tile work is always so pretty, there was something elegant about this "plain" hall. Though truthfully it's not really plain at all when you look at the brickwork designs in the pillars and especially the ceiling, which was different around each skylight. 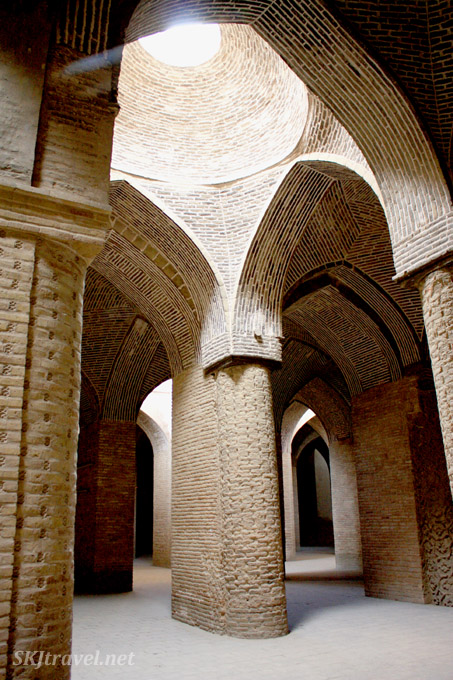 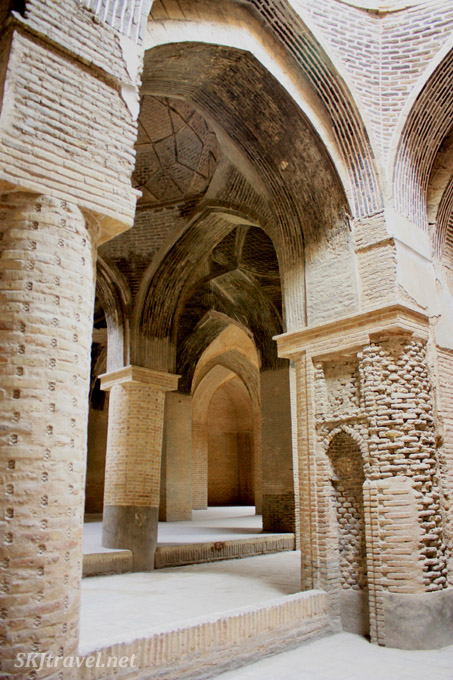 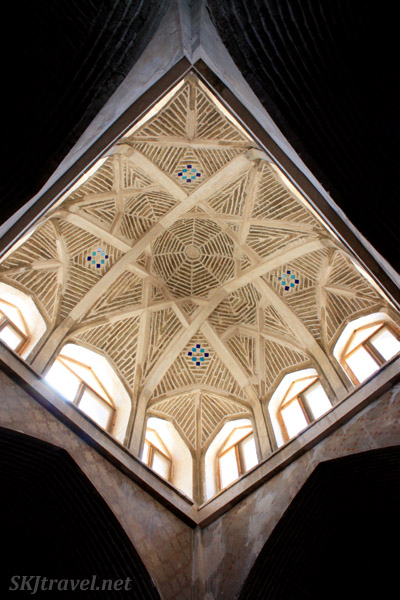 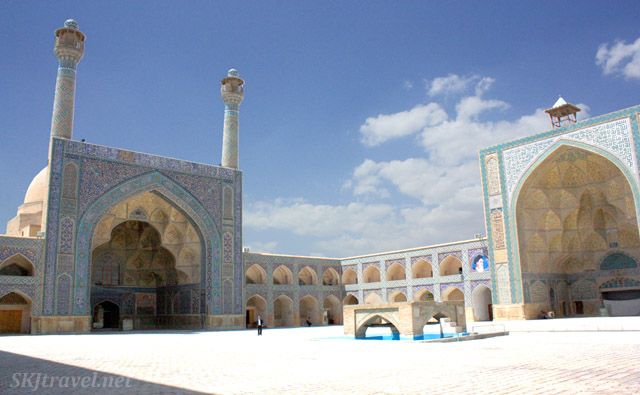 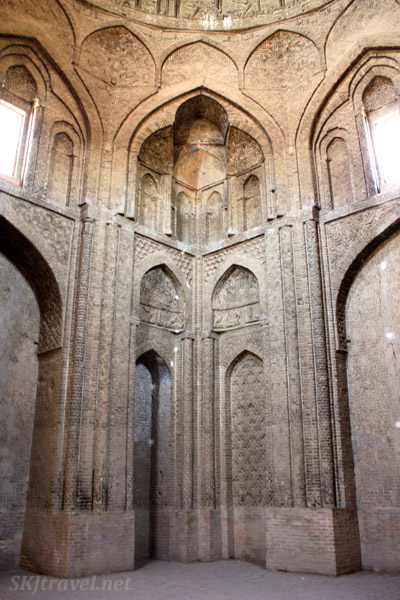 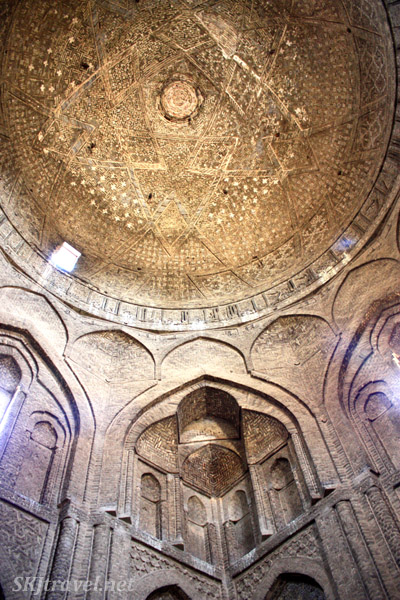 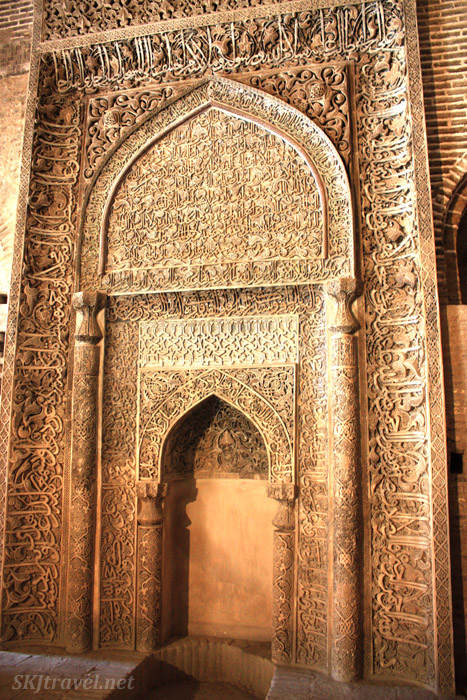 Much more to come from Isfahan. But now you've had your fill of mosque architecture!