Back in Beijing Exploring Beihai Temple and the Forbidden City

It almost feels like home. Back in Beijing at Downtown Backpackers Hostel again.  Some of the staff remembered I'd been here last year.  But it's a rather sad "homecoming" as everything here is changing.  The hutong in which the hostel is located is getting a face-lift to homogeneity. The cute little "hobbit" doorway across the street from the hostel has been torn down and a featureless wall and door have replaced it.  The street has been entirely repaved; building after building is in rubble; new clothing stores have gone in and pricey bars with international beers and mixed drinks; there's construction and destruction everywhere.  It makes me sad.  But the whole city is like this now.  Especially around here in the main tourist section.  The Olympics are having a huge effect on things here.

We just got back from the Acrobatics show.  I spoke of its jaw-dropping amusement last year, so I took Erik to the show this year.  Many of the same apparatuses were used, but the show itself, choreography and whatnot, was totally different.  So it was fun to see a new show.  The nuttiest "sketch" of them all was the last one in which twelve girls ended up on one bicycle being pedaled around the stage.  And for awhile there were three bicycles pedaling around with three riders on each, jumping between one moving bicycle and another, balancing on top of each other's shoulders and wrangling themselves around the bicycle frame ...  Now that, in my book, is some entertainment!  I knock on the desk top (which is wooden) as I say this, but so far the weather here in Beijing has been relatively pleasant.  Radically more comfortable than the weather was in Guilin and Yangshuo.  Perhaps our sweat glands will be able to recover, afterall, from their overtime work last week.  I thought we might have blown them out or something.

The flight back to Beijing was uneventful.  Yesterday, we went to the Forbidden City. I was happy to go again and show it all to Erik, but was anticipating it to be the same as last year, and that would have been fine.  However, it was largely a new place to me.  Since last year, a lot of new space has been opened up as renovation has been completed, and several new very interesting exhibits are open.  It was funny that out of the many rooms comprising the exhibits, only in two could you not take photos.  Those rooms were (1) display of Qing Dynasty military weapons, which included some crude cannons and firearms, and (2) display of old military uniforms worn by imperial troops.  These ancient military secrets must not leak out to the rest of the world! Who knows what they are secretly planning with their cannons and cotton pants .....

We came to the Forbidden City through Coal Hill Park, which I didn't go to last year.  So that was new also (there is a high hill from which you can look down on the Forbidden City, although the pagoda on top is closed for renovation).  The park is nice with flowers and bonsai trees, but the most fun thing was the people.  A guy with a huge brush and a bottle of water was walking around "painting" calligraphy on the sidewalks.  He had a little dialogue with us.  He wrote to us in English that he loved the World Cup soccer.  And then we wrote back and forth on the sidewalk in English and he in some Chinese characters.  And this was all taking place next to a group of ladies playing drums together and working out some choreography with their drumming rhythms (the drums were slung over their shoulders, so they were standing up).  They seemed to be having a good time. 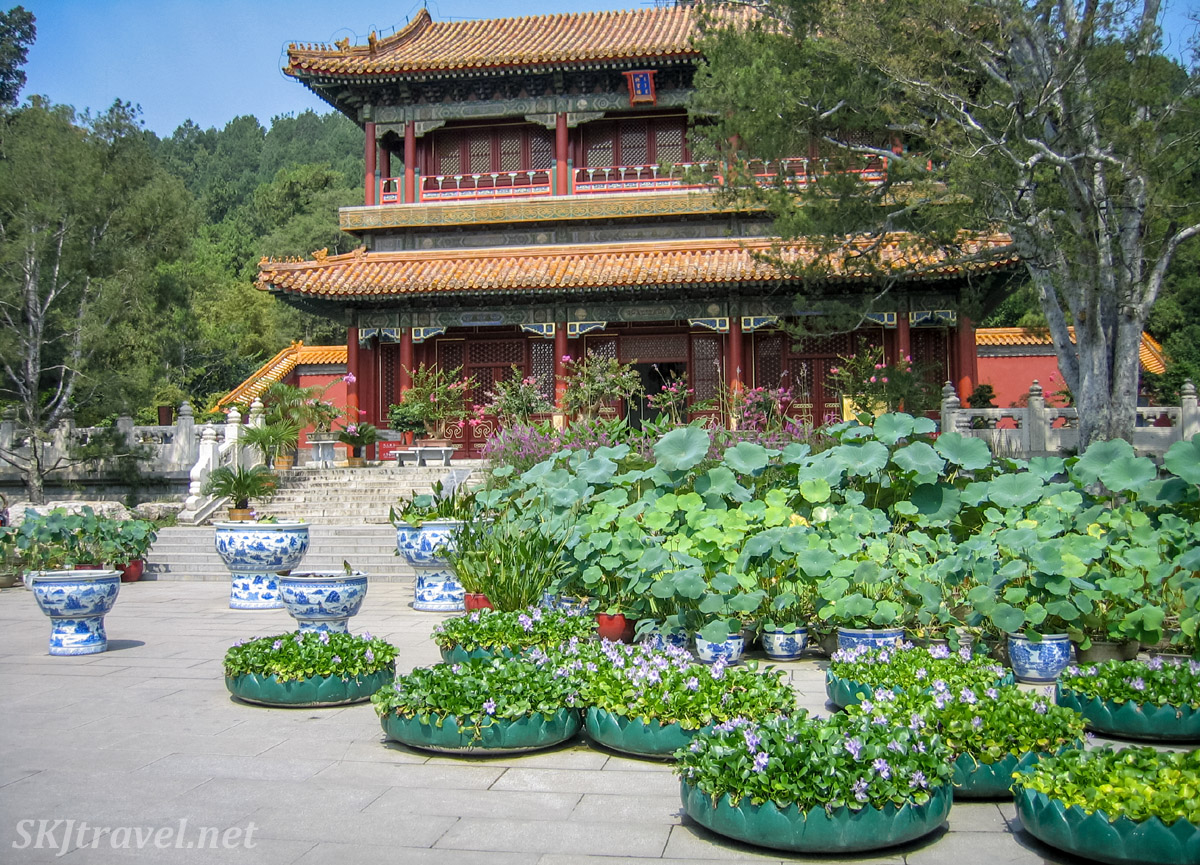 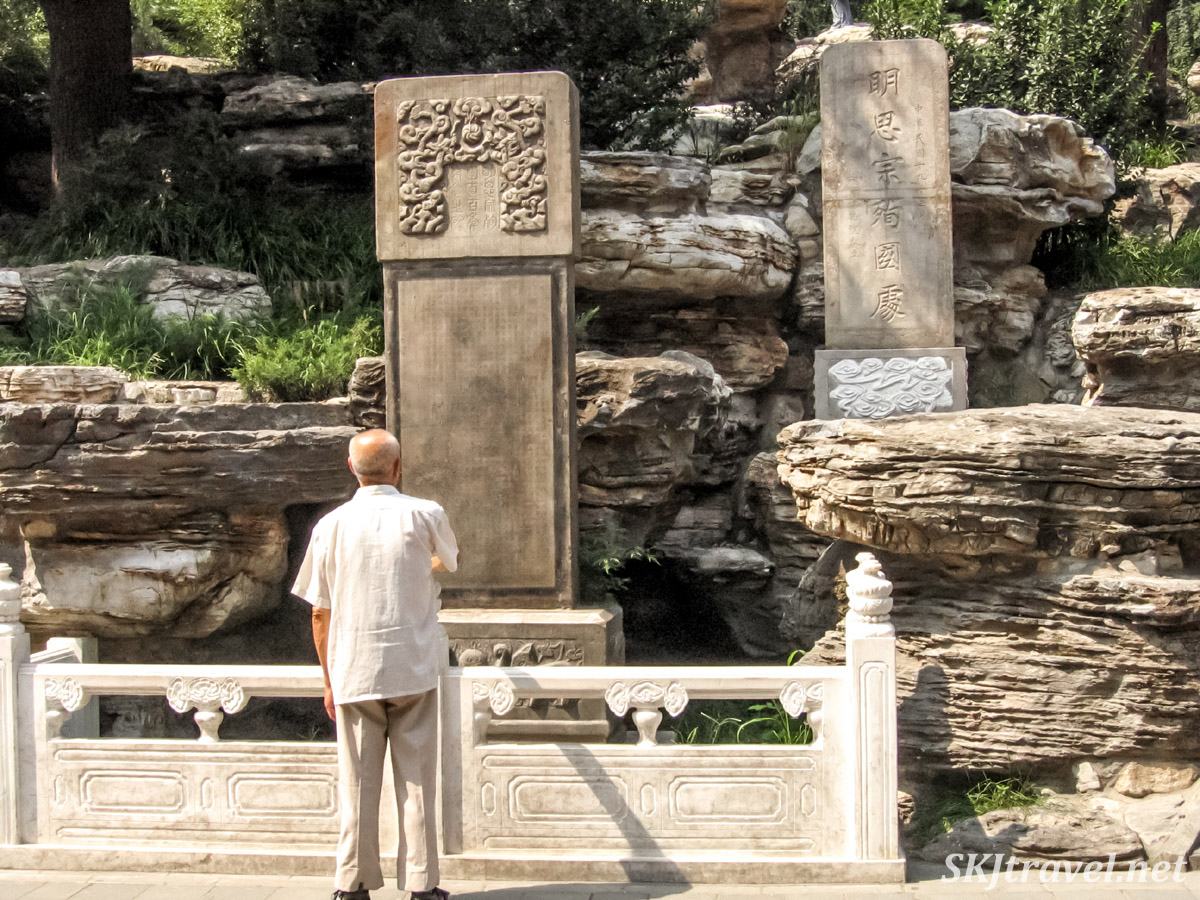 So then romping through the Forbidden City, I'd already sussed out most of it last year. See last year's post for the most photos. Here are a few more to tack on from the outer courtyards and corridors. 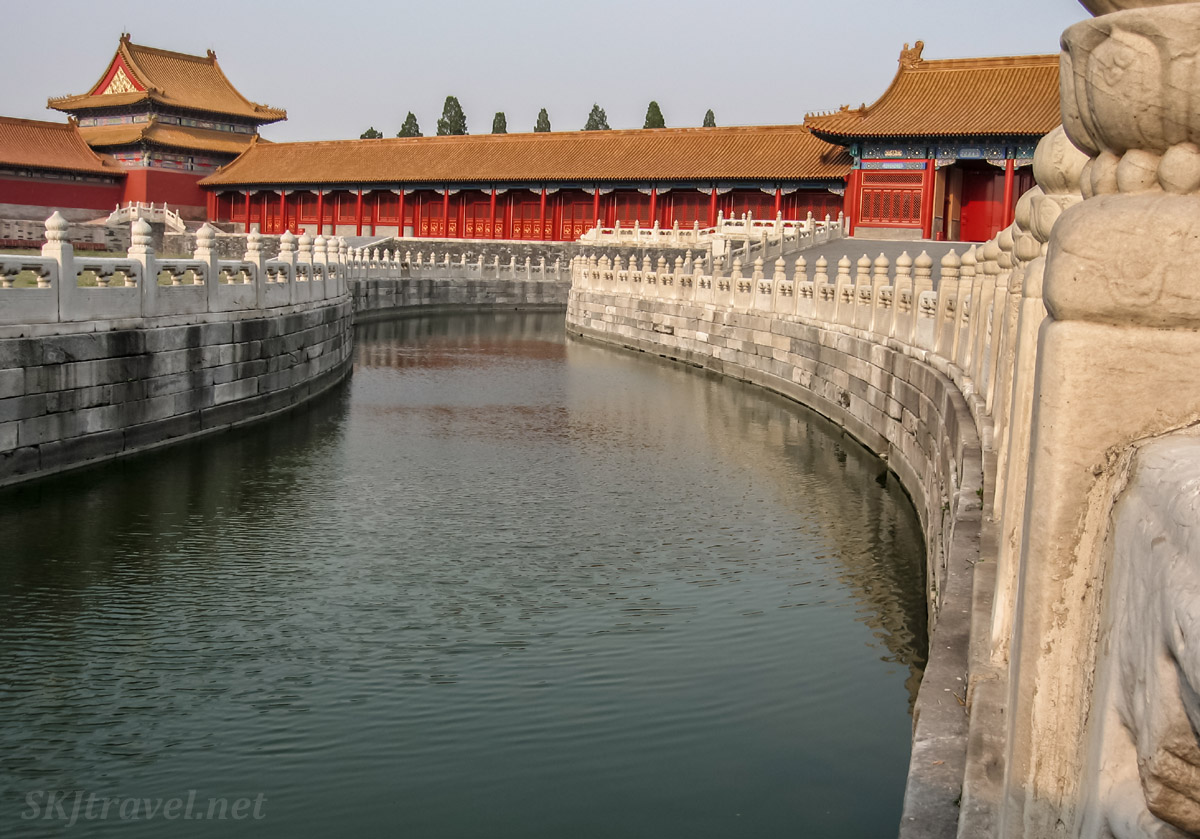 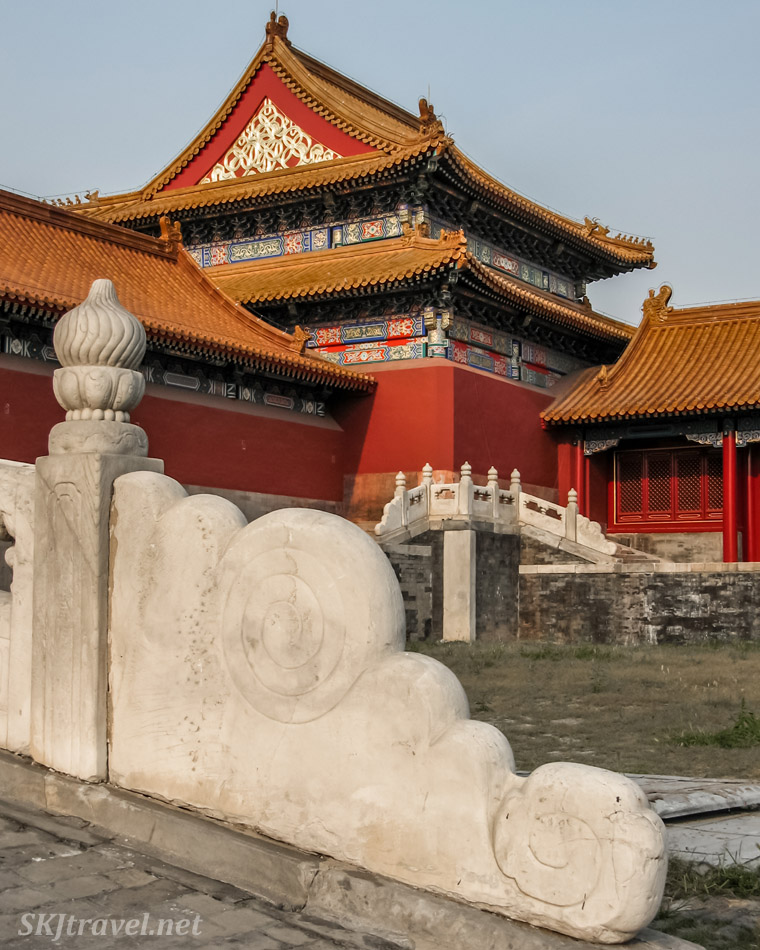 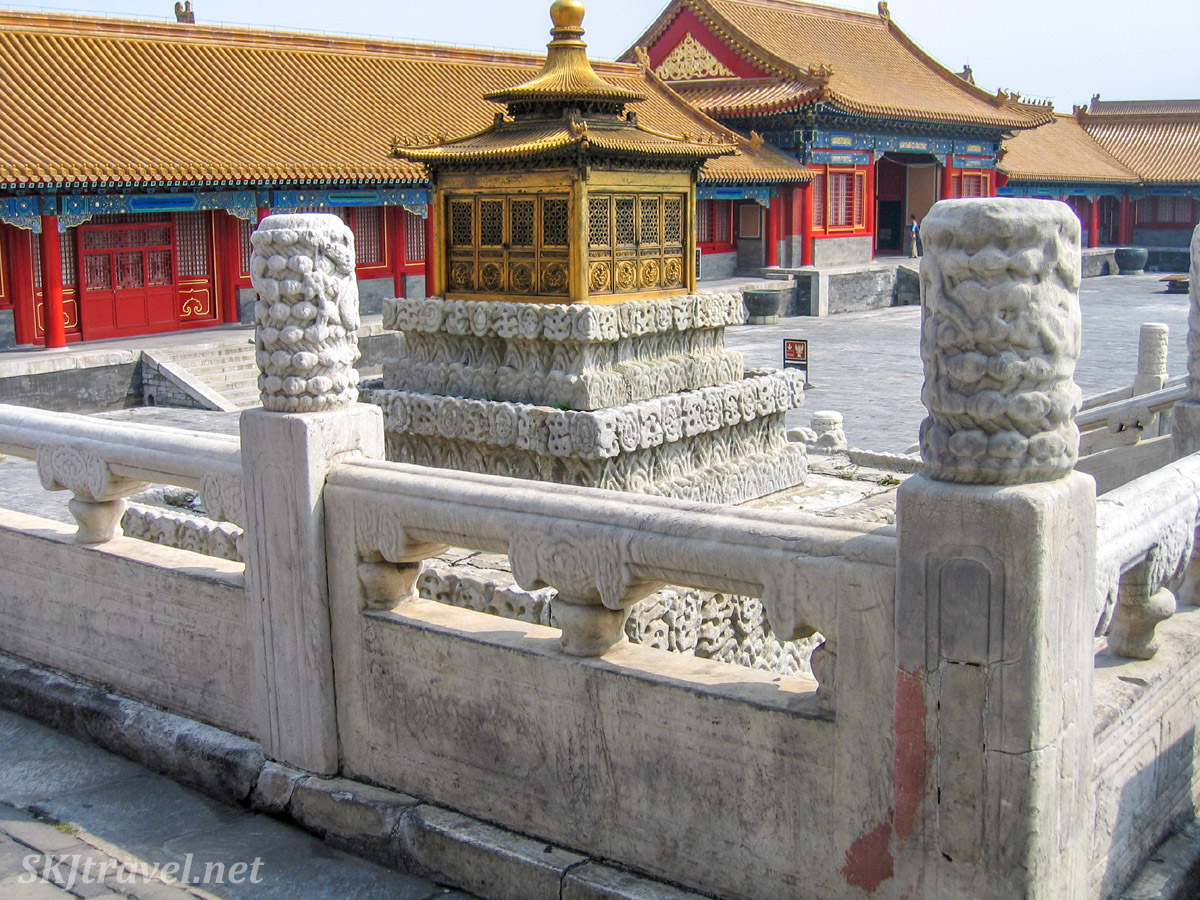 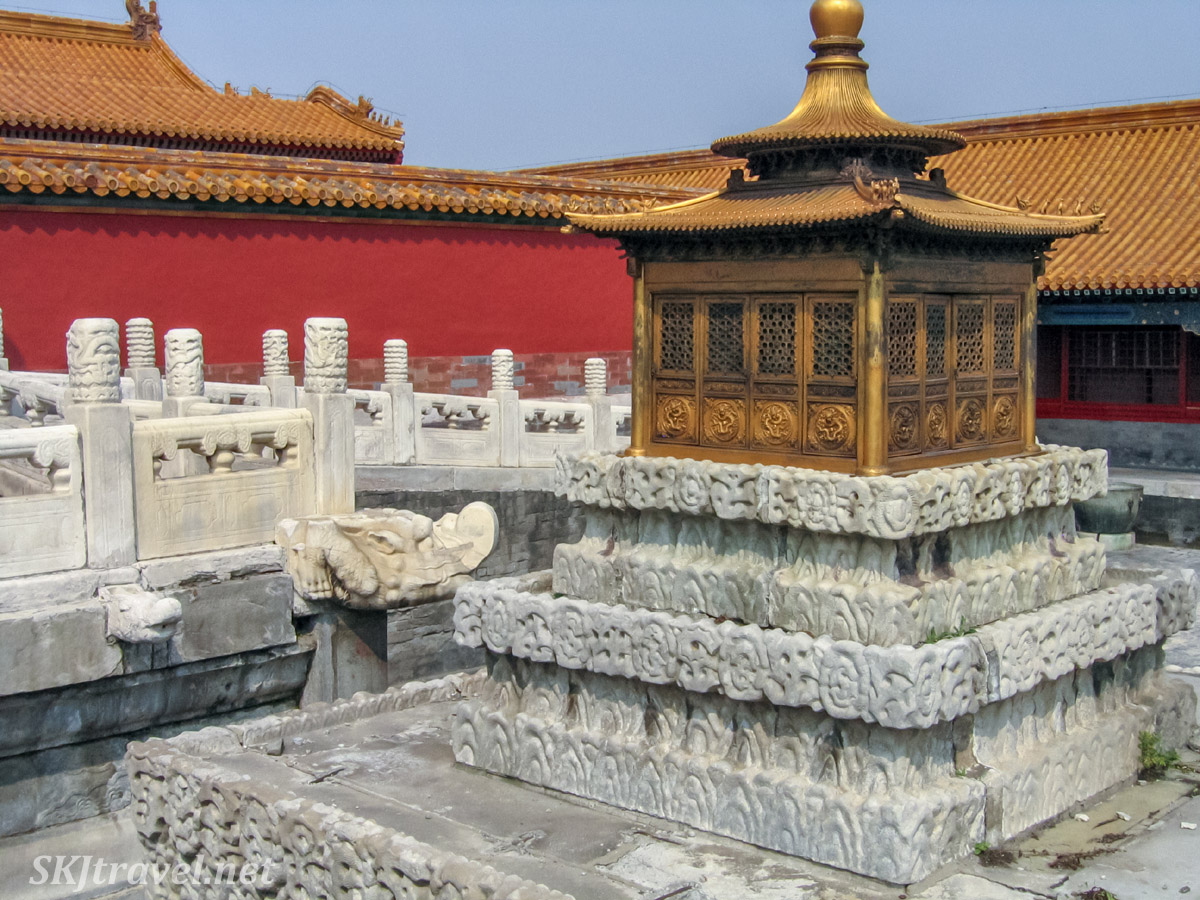 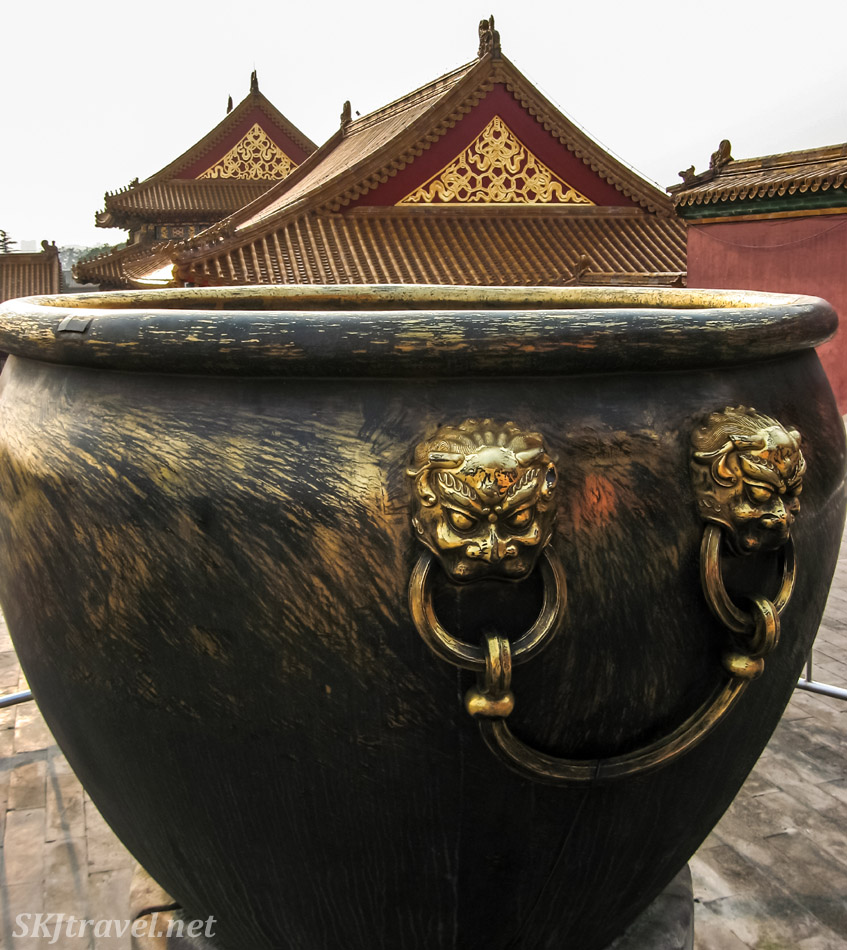 I have a small collection of tea pots now, and that started in China. I saw the cutest little ones at various souvenir markets, I wouldn't even actually make or serve tea in them. But that began the collection; now I have some functional and some purely decorative, but nothing as fancy as this! 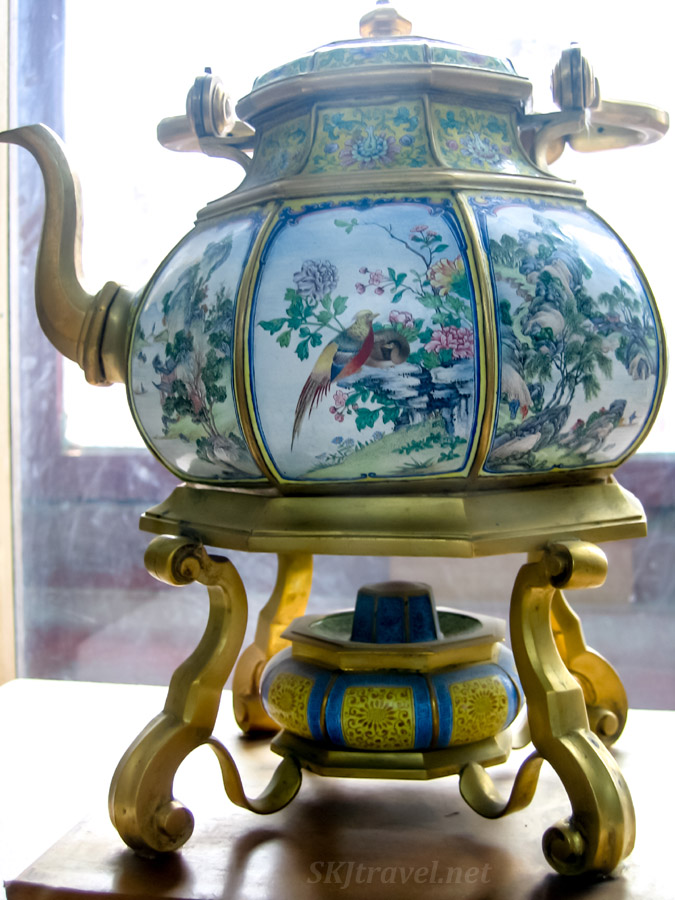 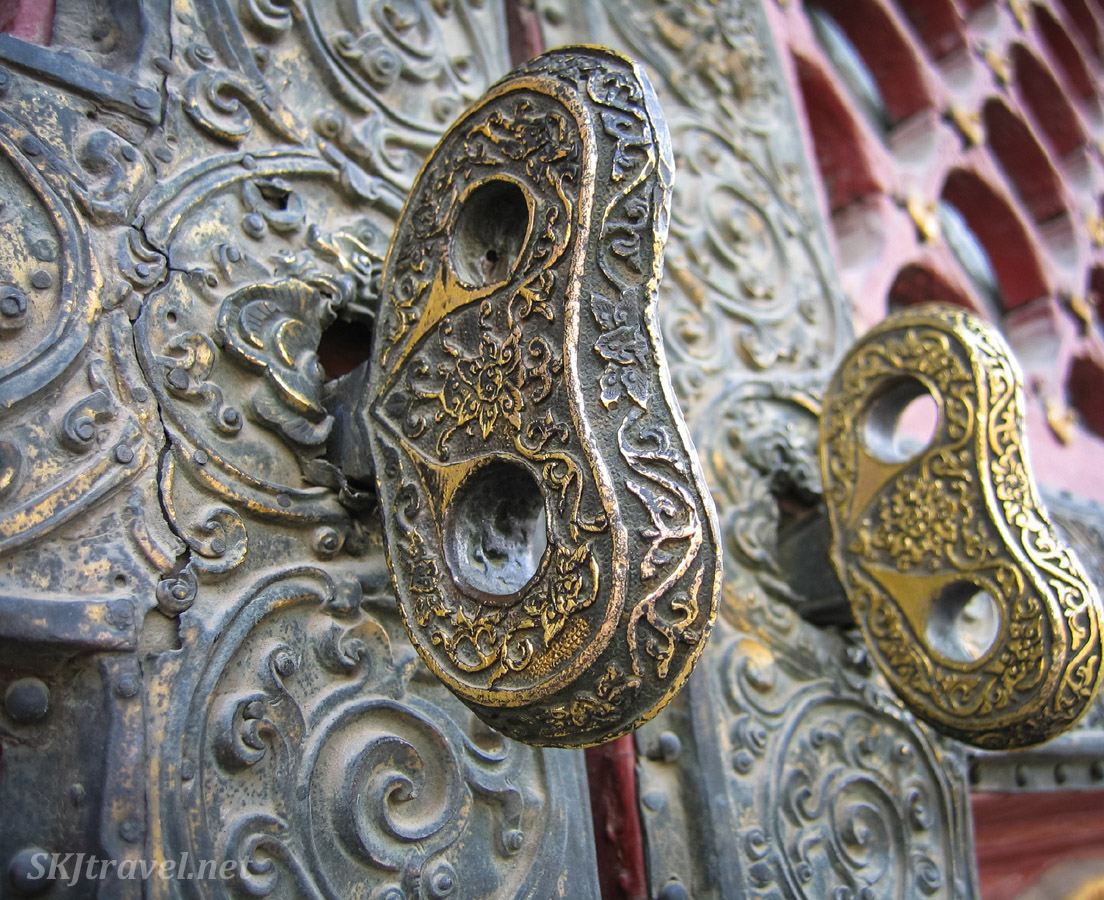 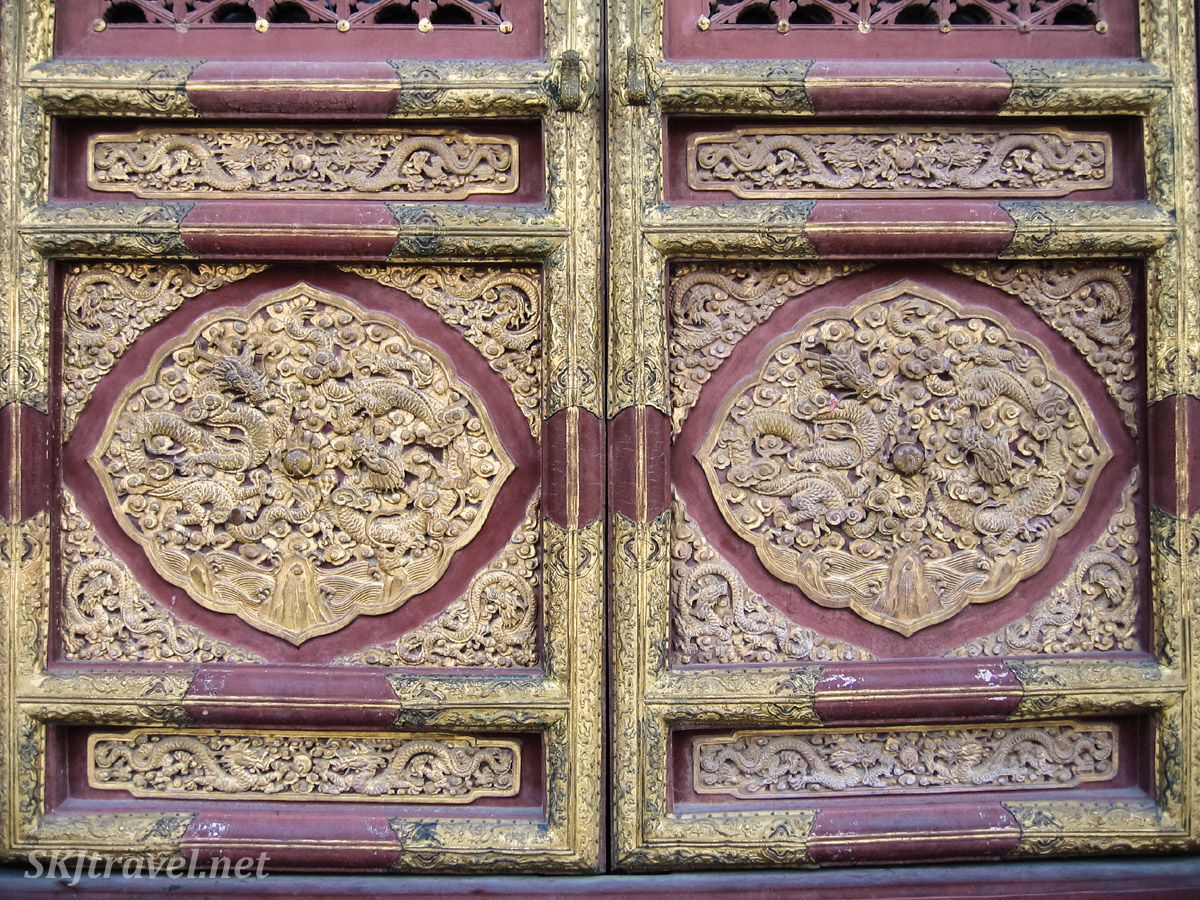 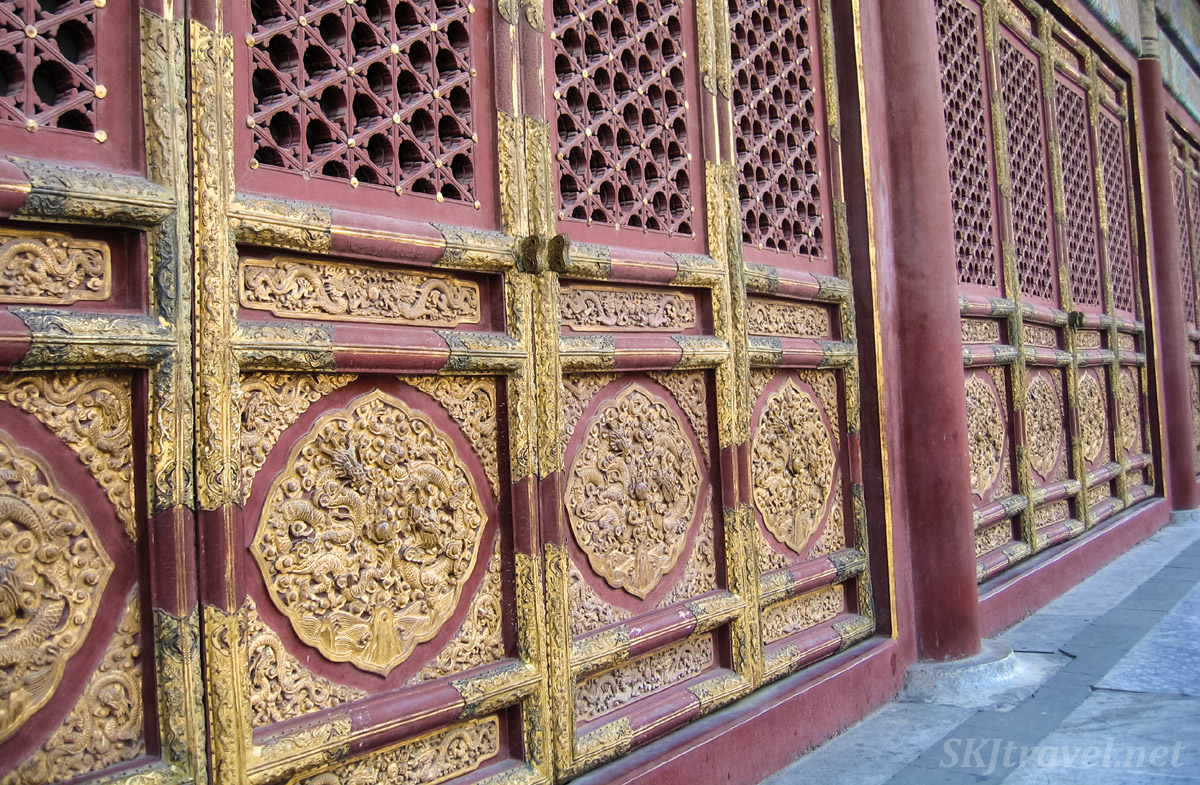 Walking around in the Forbidden City, with my head up, gawking at all the architectural craftsmanship and artistry on the buildings instead of watching where I'm walking, I inadvertently stepped into a hole with one foot where a large brick of the cobblestone paving was missing.  How typical.  So near the end of the day, about half an hour before the city closed, we still hadn't seen all the rooms on one side, so I sent Erik off on his own to run around through as many buildings as he could and take pictures, etc. As they started closing down the city, though, he almost got locked out on the opposite side from where I was waiting.  That would have been a bummer! On the way home, though we could have taken a taxi for the sake of my foot, I just couldn't help trying to find this little garden that I stumbled upon last year off the far end of Tiananmen Square.  So we walked around trying to find that, almost gave up, and just as the light was fading in a smoggy orange sun, we found it. 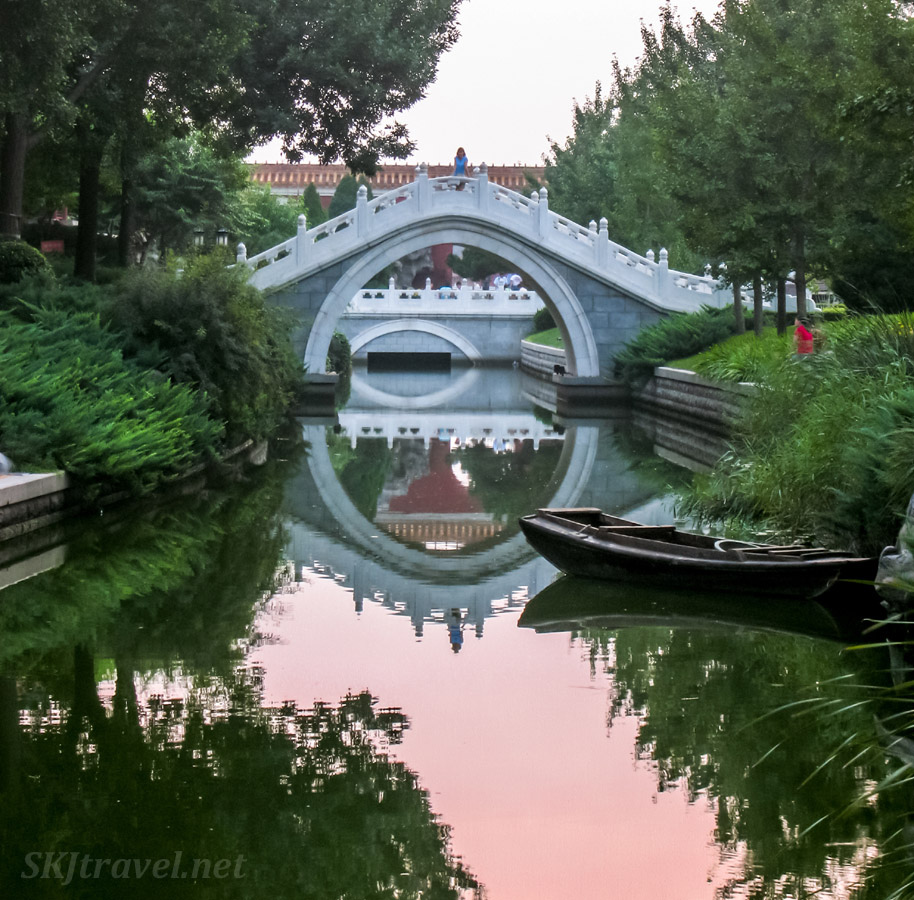 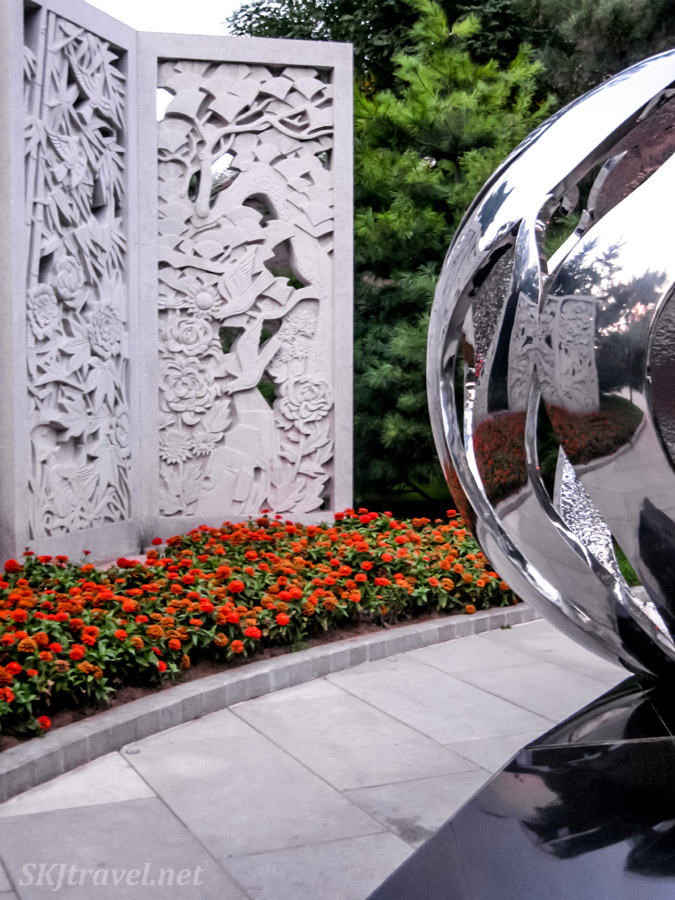 Then we walked around some more and found this big night market that I'd heard about and tried unsuccessfully to find last year.  So I was happy to find that.  We ate some street food beneath a balcony where a seriously freaky-looking, costumed lady was belting out Peking Opera into the night air.  Looked at a few souvenir items and was astounded at the prices the vendors were throwing out as their first offer. I was thankful I had some clue about what things should cost. I probably still paid a ridiculous price, as I'm not a world-champion bargainer, but the vendors finally (and pretty easily) settled on a price one-sixth of their original asking price.  In other cities, I ended up paying about one-half of their starting asking price and had to bargain a lot harder for that. So clearly, Beijing vendors expected incredibly gullible traffic to wander through their territory. I suggest countering these vendors' first price with an offer of about one-tenth that amount! 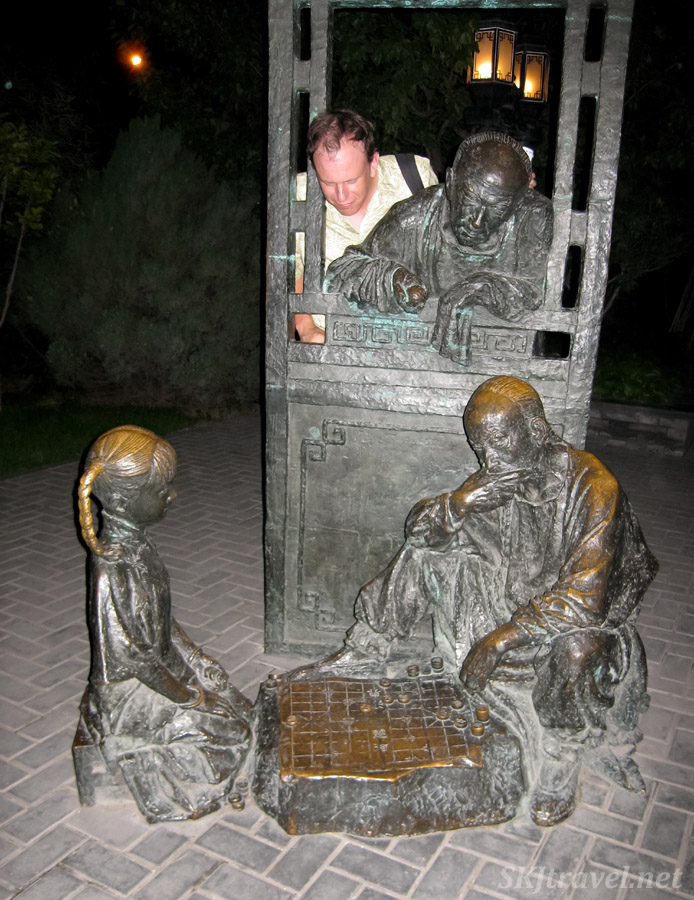 Making our way back to our hutong through a different park, we stopped and sat down with a cold beer we'd picked up along the sidewalk and watched a group of folks singing.  One guy with an accordion, one with a synthesizer and one with a flute were playing the songs and a crowd was gathered around singing along -- people walking by stopped to join in if they felt like singing.  Two ladies were practicing their fan-dancing in the open space next to the singers.  Some guy's little tiny dog came up to us at one point and the guy pointed to our beer cans.  It took a moment to figure out what he was telling us, but turns out the dog loves playing with them.  So we spent at least half an hour throwing our empty beer cans around for the dog, and Erik was playing soccer between the dog, the owner, himself, and after a time a lady passerby who looked very skeptical and dour at first but then joined in. I love this sense of community in China where anyone and everyone is welcome to take part in sidewalk activities.

Another new attraction for me to see this year with Erik was Beihai Park. It took a full afternoon to make our way through that – a park along a lake with an island you take a boat to,  and a number of temples and little buildings with exhibits, pretty flowers, etc.  Allow me share from beihaipark.com.cn their overview.  "Beihai is a classical royal garden with the earliest construction, the most complete preservation and the deepest cultural deposits in the existing history of China. The formation and development of Beihai has gone through several dynasties of Jin, Yuan, Ming and Qing. It has carried the history and culture of China for nearly a thousand years, and has formed a gardening artistic style represented by the imperial garden. It is a condensate of the garden culture and art of the past dynasties." According to the site, 1166 is the beginning of historical records in Beihai.

The tall structure rising above the trees is Yong'an Temple, known as the White Pagoda, built during the Qing Dynasty at the request of a Tibetan lama. 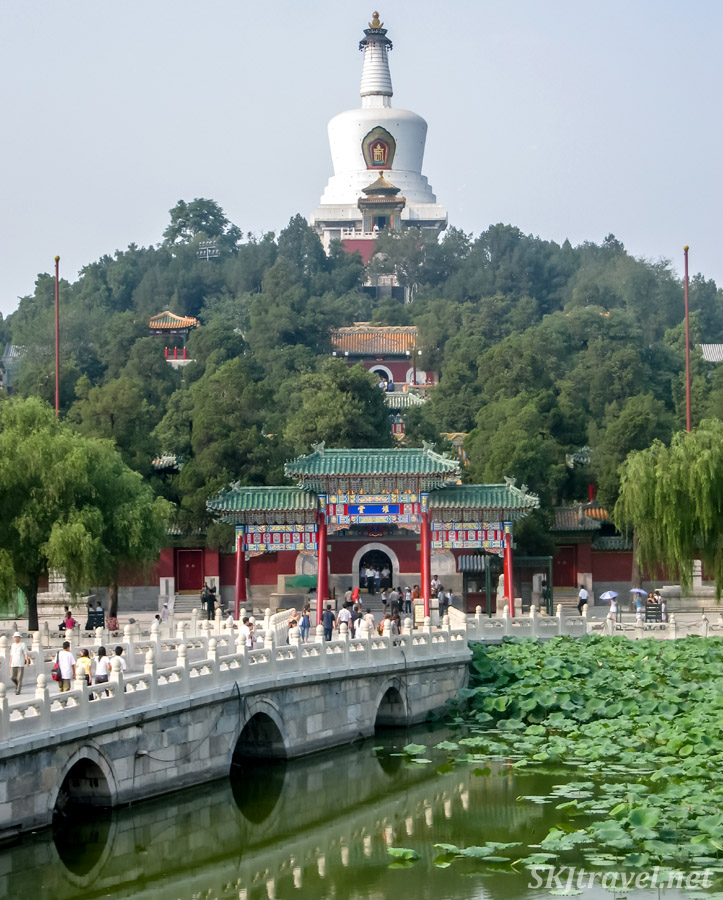 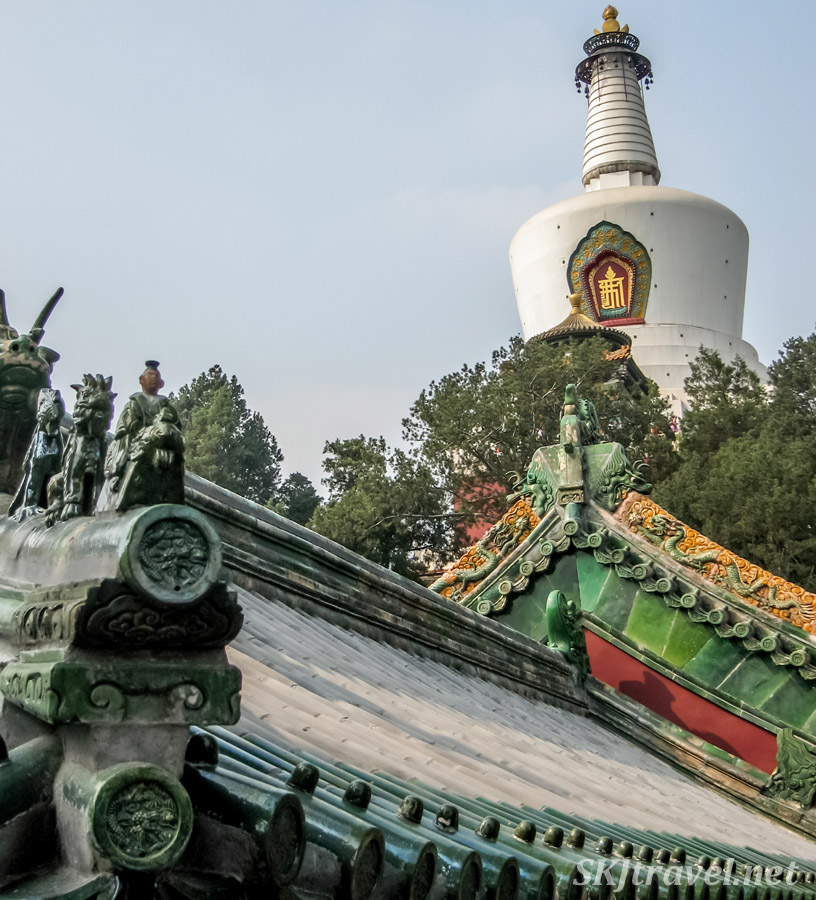 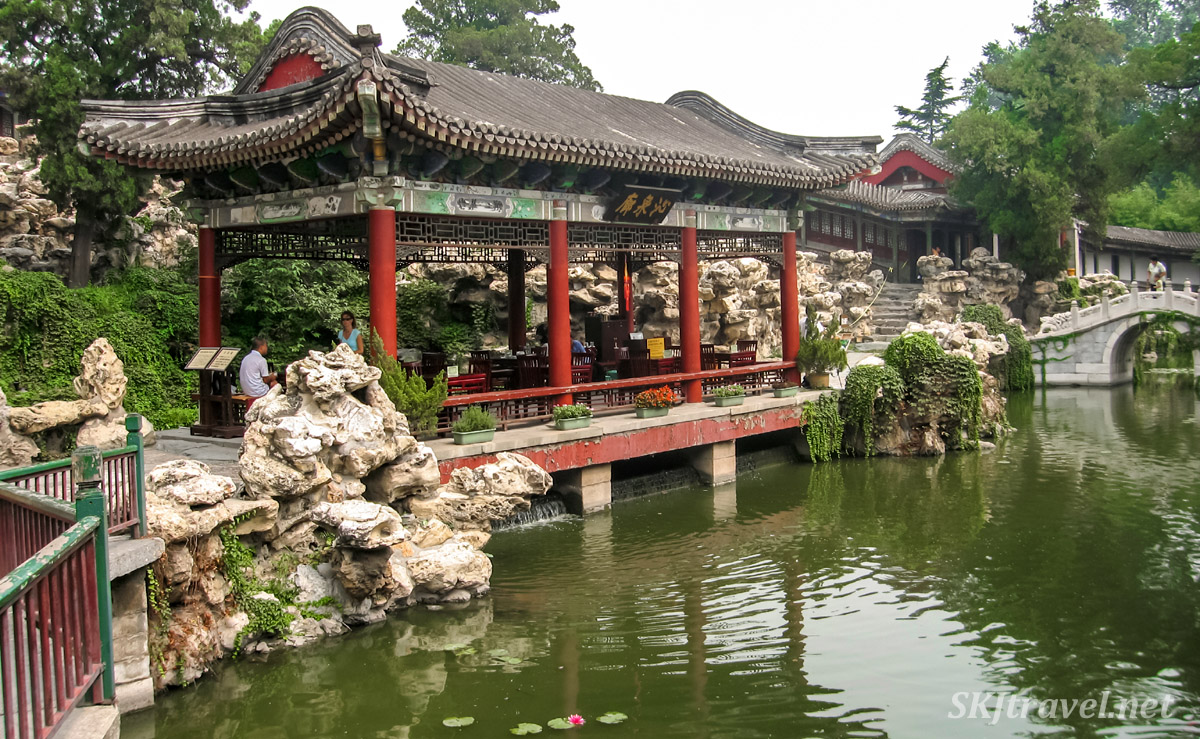 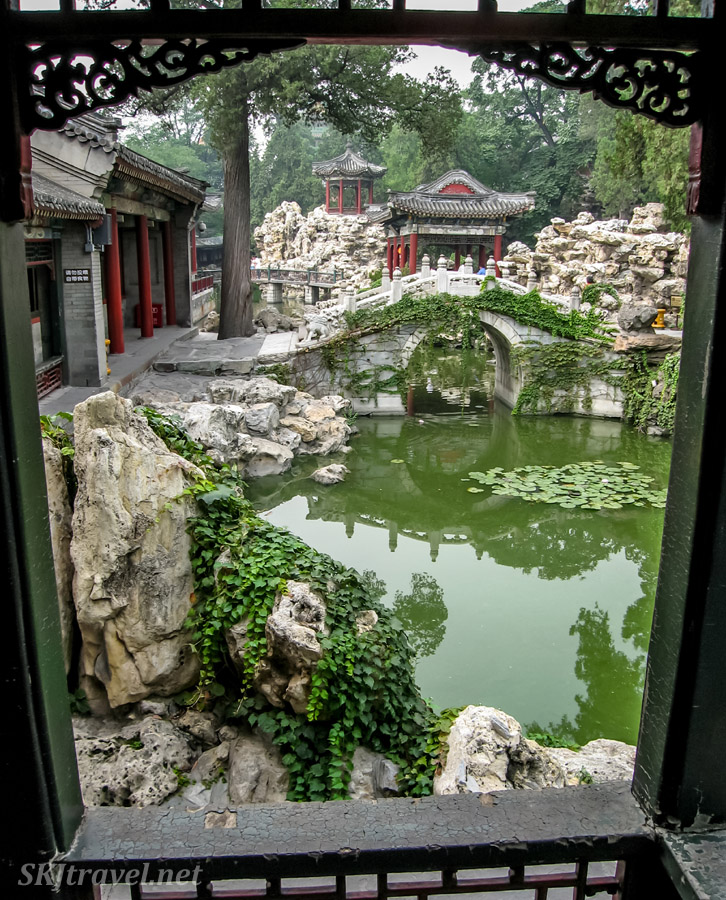 This section (below) of the park is called Xiaoxitian. The main building is Elysium, first pic below, the largest square pavilion-style palace building in China with a total area of ​​1,200 square meters and beam span of 13.5 meters. 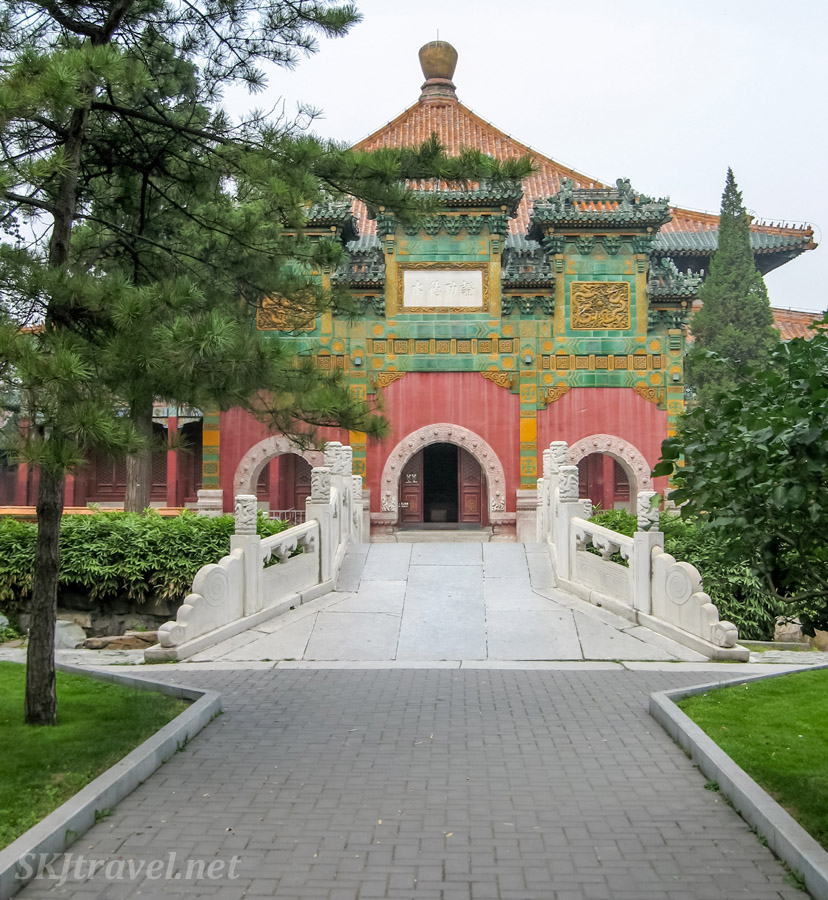 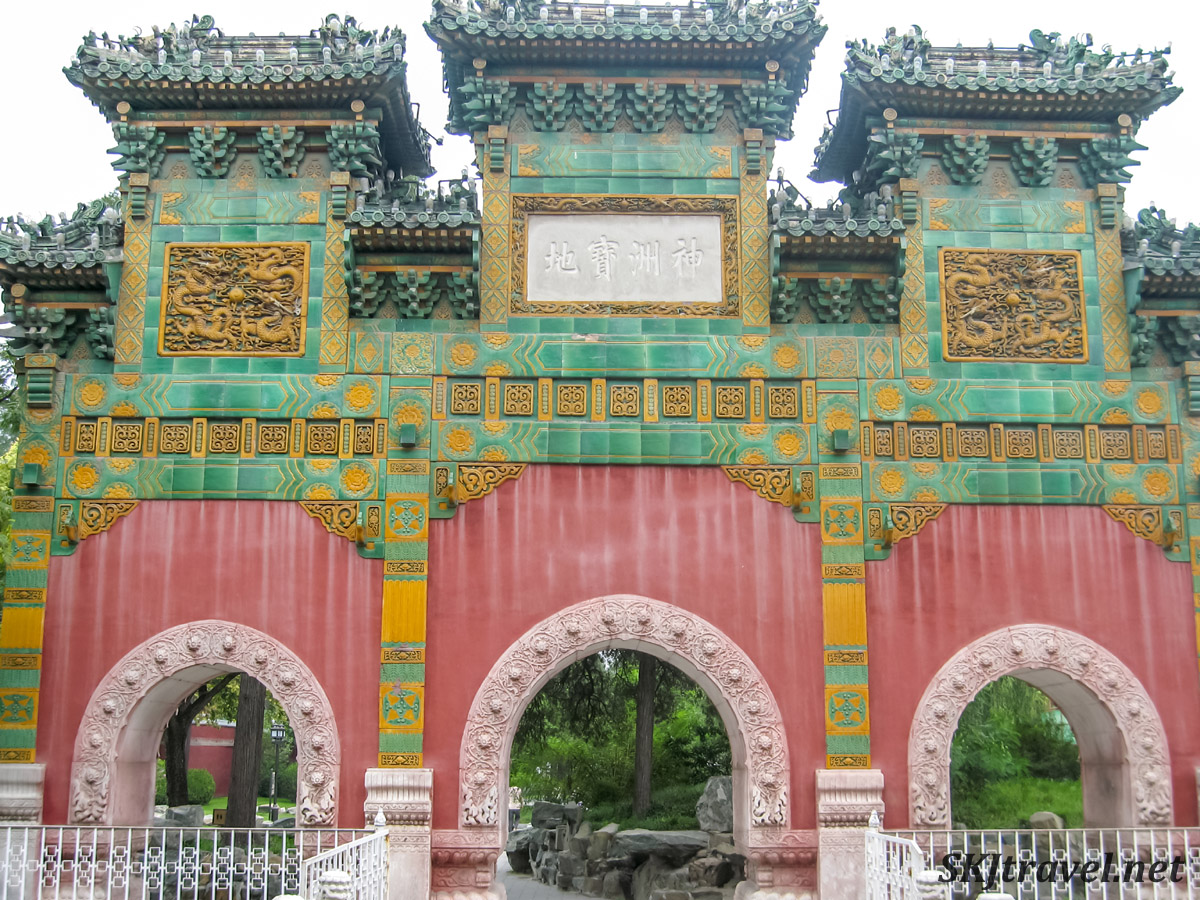 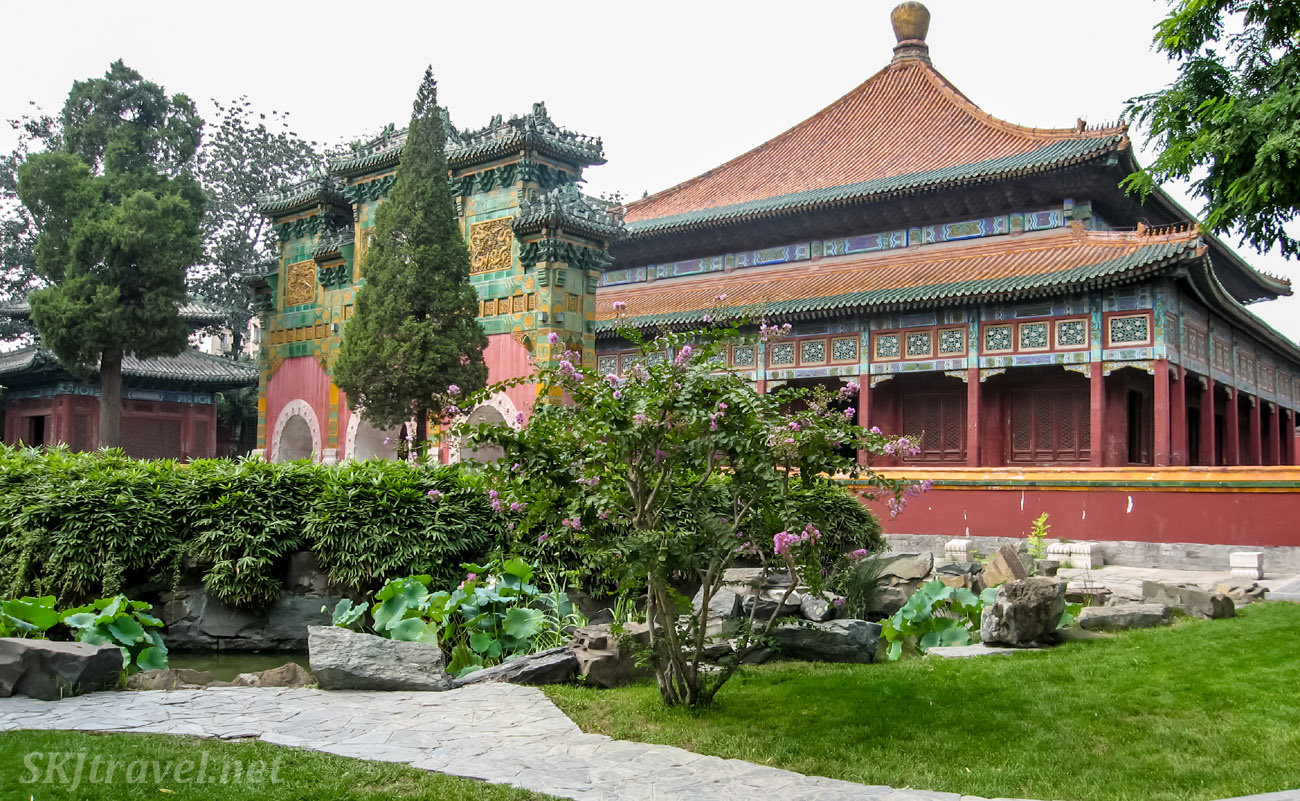 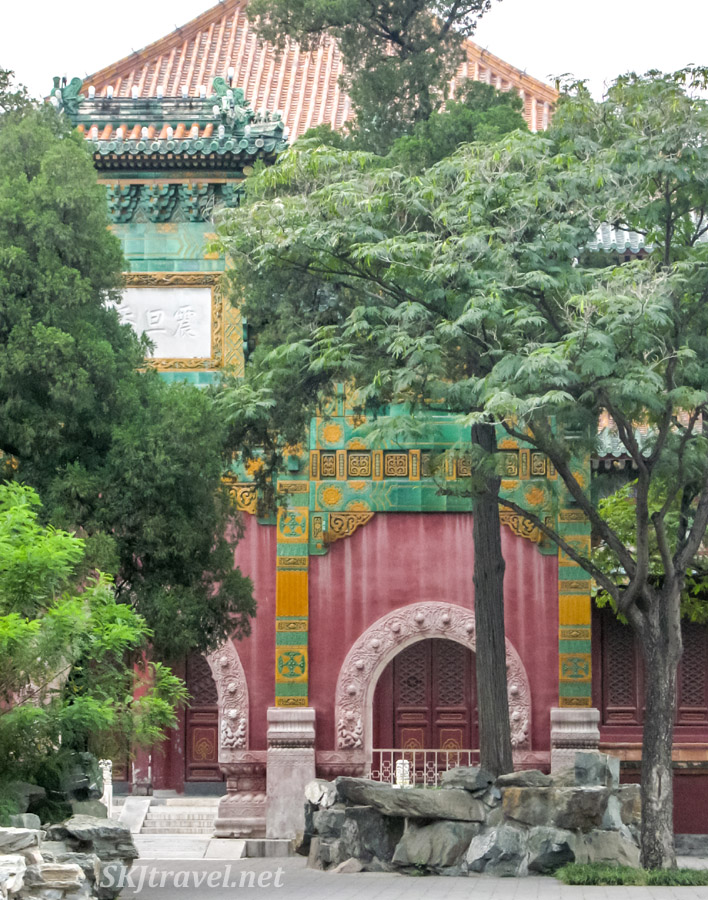 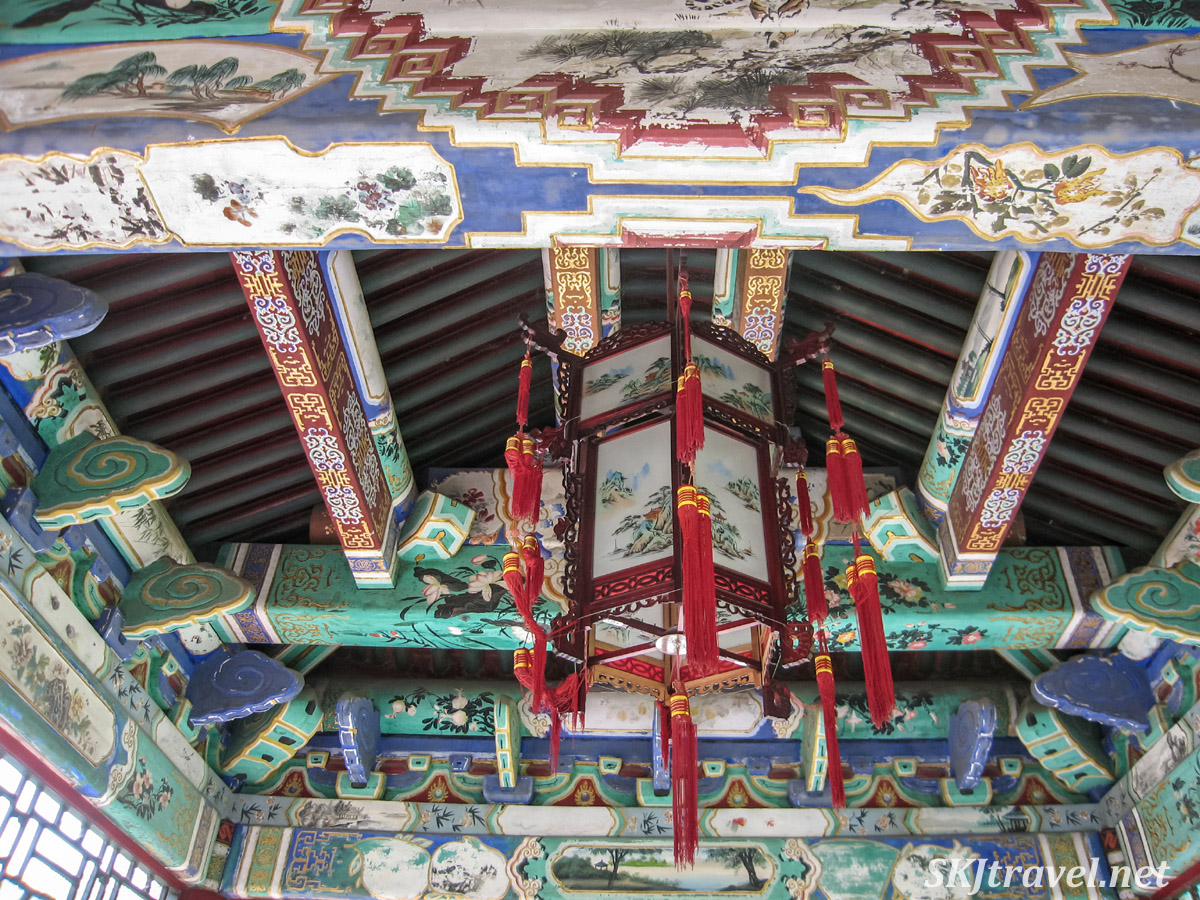 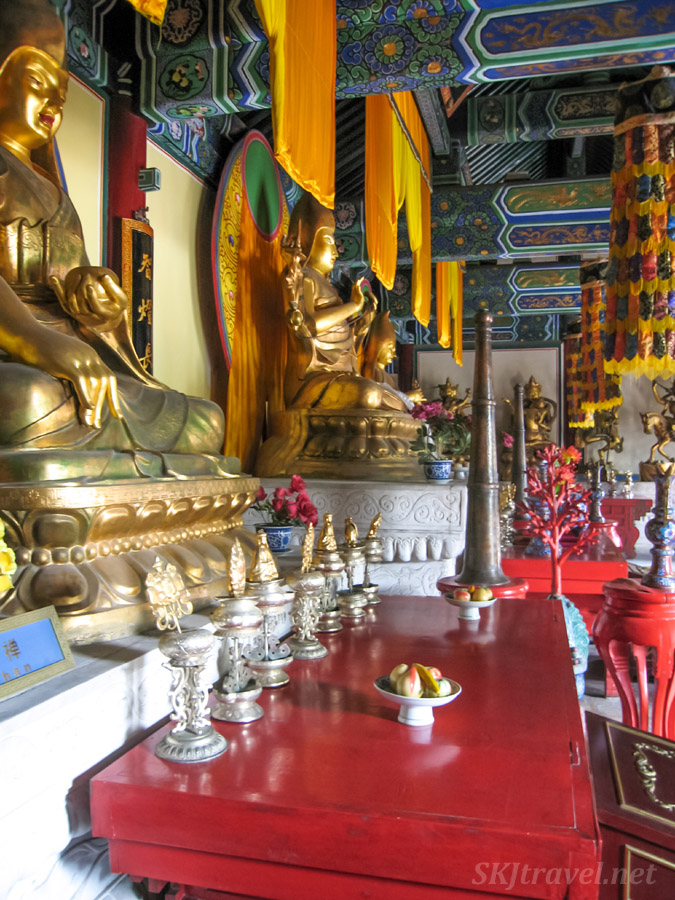 Then we had another yummy, though huge, dinner in our hutong.  My gosh, I think we've each gained a good five pounds.  We've eaten just stupid amounts of astonishingly good food for weeks now!  At this very moment, I can literally feel my belly straining at my waistband, struggling for freedom.  "Free the blubber!"  As a matter of fact, Chinese men have a particular fondness for walking around with their pants unbuttoned and/or unzipped.  Also they like to hike up their shirts above the bulb of their stomachs.  So I really would not be out of place freeing my blubber (except that it's only men doing this; most of the women are bean-pole thin).  It's really a funny thing about the pants.  I remember once in the village this year, we visited a family and then they wanted their picture taken with us, and Anrong was also going to take a family photo for them that he was going to print out and give them to frame.  So the family all changed clothes into neat clean ones, and posed all nice, smiled, and the whole time the guy's zipper was wide open.  No one but me seemed to notice. The old guy who built and ran the botanical garden in Yulin City also had his zipper completely undone, his shirt and underwear sticking out of the unzipped hole and everything.

Tomorrow it's off to the Ming Tombs. So far it's been a very satisfying third stay in Beijing.

See more of the Forbidden City in China I

Read articles from China I