Pet Names - Settling into the UWEC

Since we are likely to be living together for awhile, I decided to go ahead and name the cockroach. My roommate is now called Martha. Here is my shared bedroom. As of last night, Martha was taking the lower bunk and I the upper. Also a picture of my living room. 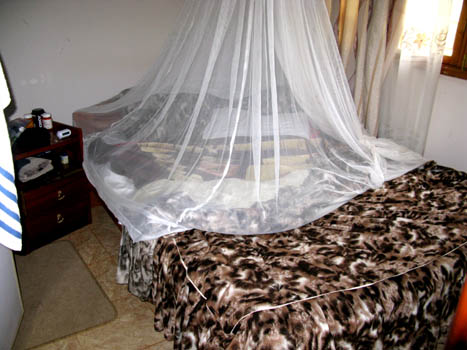 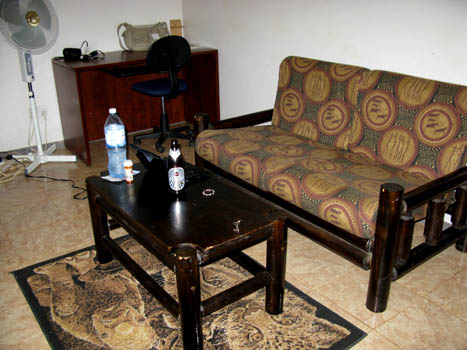 My breakfast companion I’ve named Ninigoomba. This was at the suggestion of a very energetic young girl who joined me a couple days ago. This is how I spend my breakfast: sitting quietly at a table on a porch overlooking Lake Victoria, where I listen to the waves meet the shore, watch majestic crowned cranes stroll the lakeside along with other birds whose names I don’t know, a pleasant if faint breeze on my face, the sun still low on the horizon creating a golden light, and Ninigoomba on my lap… Nini, if you can believe my good fortune, is a kitty cat. Climbs right up in my lap and curls up in a ball or stretches up and lays her head on my chest for me to scratch her ears. I’m not entirely sure how things could get much better. Even my breakfast is one of my favorites, an omelet.

Last night after I ate dinner at the restaurant amid the Easter celebrations, it was again completely dark when I struck out for home. There is not a single nighttime light at the facility except for the public buildings while open and private residences. Even the holiday partiers had thought to bring flashlights. At first I rued my lack of forethought not bringing a flashlight. But soon I was delighted by a spritzing of fireflies in the bushes beside me. This is alright, I thought. As I was nearing home, I heard a seriously creepy, large mammal-esque grunting sound behind me. Looking behind me would not have illuminated anything in such darkness. The sound was scary enough and close enough that I literally doubled my pace down the road. There is a very deranged and aggressive male baboon at the chimp house, with one lower fang perpetually outside his mouth. His indoor cage is adjacent to the room where we prep the food for all the primates and monkeys. So he is constantly sitting on his window ledge, smashed against the caging, sticking his hand outside the cage and slapping the cement wall. I had visions of him escaping and chasing me. (In fact the next day, I found out that animals do escape from time to time, but mostly the warthogs.) So I’m speed-walking now in the dark, and suddenly 2 camels trot past me. It was so shocking, as in utterly unexpected, that I just starting laughing and slowed back down. They give camel rides to little kids here, so these were obviously those camels, I guess running home for the night? I have no idea where they were going, heading away from the zoo toward my house.

I can’t even tell you how relieved I was today not to have to pitch food to the chimps across the moat. My right arm is so ridiculously sore from all my girly throwing. I can throw left-handed to the smaller patas monkeys across their ditch, so I did that today, but avoided the chimp sport. However, in the morning I got to feed them their porridge. They hold their mouths open and you just pour it right in out of a cup. It would be mayhem to let all 11 chimps have their own cup of porridge to drink or throw however they wanted. But little Nepa, the youngest, took a cup and fed herself. So cute. Their bottom lips can stick out and hold a truly astonishing amount of liquid in them. So I got to see the insides of a chimp’s mouth very close up. I most definitely would not want to be bitten by one!

Here I am in my morning uniform – overalls and rubber boots. 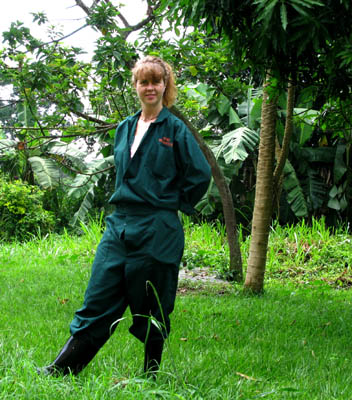 After feeding the patas monkeys I accompanied Henry, the keeper at the chimp house, to feed the colobus monkeys in a different part of the zoo. Along the way we searched for and he picked a vine that grows wild to feed to the black and white one. This is basically what he eats (rather than assorted fruits and veg fed to everyone else). It obviously grows copiously on the grounds in order to be picked everyday from somewhere. Along the way and afterward, because we were finished with morning chores at that point, Henry and I had some lovely conversations. If you subscribe to my email notification list, you will get to read more of this with the next notice.

He took me to a small horticulture garden where they grow native medicinal plants. Each has a sign with its name and the things it’s supposed to alleviate. Henry told me a lot about how his tribe uses the various plants. There is one plant whose leaves curl up if you touch them. I, of course, couldn’t stop touching them. So fun to watch. The cat’s eye plant has seeds that are bright orange with a black end, hard and small. Henry had me eat some of the leaves… first they taste just plain leafy, then as you continue to chew, they become very bitter, then as you chew more until it’s nothing but slimy pulp in your mouth, it turns sweet. Another plant is for adolescent body odor… apparently children here when turning into teenagers produce a certain body odor caused by hormones and so you bathe them in this herb to help combat it. A certain herb for tea, helps stomach ache, Henry says he never makes tea without these leaves.

Walking back to the chimp house, Henry stopped suddenly and asked me if I detected the smell of cooking rice, like when it’s boiling or about to burn. He said, “There is a snake here.” Just a few feet away was a thick mess of jungle vines and bushes. He pointed, in there. “What kind?” I asked. “A python. Or sometimes a cobra when it is older has that smell. That’s how you can tell there is a snake nearby, it smells like boiling white rice.”  Please, please, please let me not have to find a name for some resident snake in my yard!

I will tell you more about Henry another day. Once you start talking with him, he is a fellow who attracts immediate affection.

Robert taught me a Ugandan greeting, the greeting plus reply (like “how are you” “fine”). So I’ve been going around using this. My target first makes the prescribed reply and then immediately asks me who taught me that. Must not be common for foreigners to go tossing that around.

This afternoon if it’s not raining, perhaps I will try to get some photos of my daily walk into the facilities and some of the animals for you. I get teased a bit for not understanding the very non-temporal nature of "Ugandan time." Today my lack of understanding caused me to miss lunch. Normally I eat with all the employees at lunch. But since I missed it today, I had to go eat at the restaurant where I take breakfast and dinner. Well, suckers, I had a totally awesome buffet meal because today is still Easter celebration, and watched people playing all kinds of organized silly games down on the lake shore. Can't wait to rub it in tomorrow.

Feel free to contact me with questions or comments via the contact button above; to tell others who might be interested about the blog; and if you haven’t already, to sign up for email notifications which usually contain extra tidbits of info not published on the blog.