In today's tale, we're on the savanna lands of Ndutu, Tanzania, part of the greater Serengeti region. One day we spent well over an hour sitting (in our safari vehicle) near a shallow water crossing among herds of zebra and wildebeest moving and mingling all around us. It was remarkable to me because I'd never seen so many zebras in one place at one time. A mini migration. Although our guide mentioned several times how the "real" migration included 100 times more zebra and this was so minor, and presumably unimpressive, I personally was totally impressed. 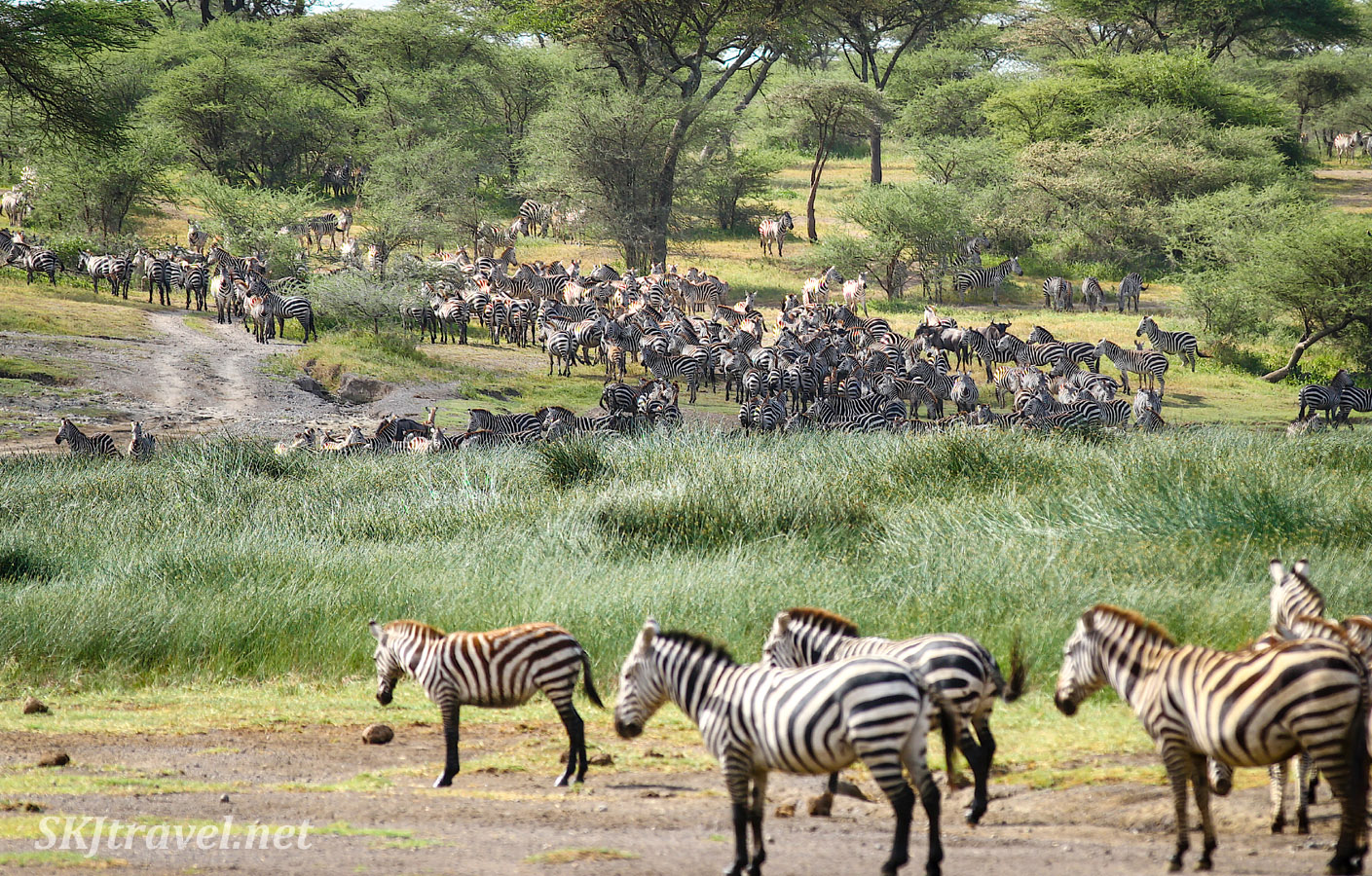 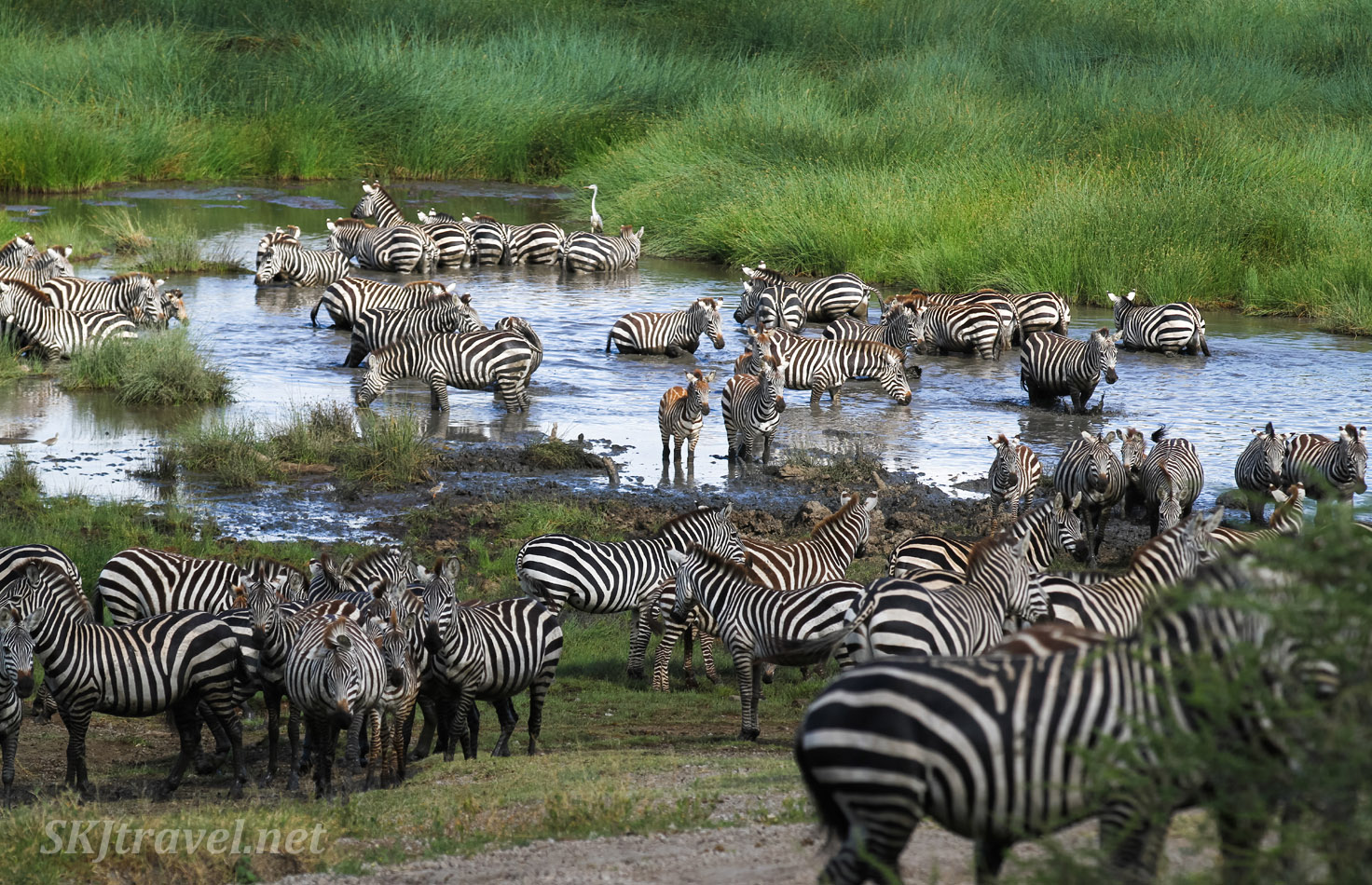 Equally with the sight of it, or maybe even more, was the *sound* of it, so many zebras making their noises. If you don't know what they sound like, I have no idea how to approximate it in written letters, haha. Sometimes I was just reduced to giggles at what a ruckus it was.

Keeping in mind I'm not a videographer! ... I tried to take some footage with the camera on my cell phone to capture some of the sound. If you listen to the first few seconds, you'll get a very rough idea, but it could get much louder at times. Here's a Youtube link:  https://www.youtube.com/watch?v=N6qvpEo4xbA

Because we were there for so long, I was able to follow one little drama that made me so sad. Earlier in the trip I saw a cheetah take down a wildebeest and give it the death bite on the throat. On previous safaris, I'd seen dead elephants gorged on by lions, jackals carrying away bits of impala, cheetahs with their faces covered in blood from feasting on impala, painted dog puppies playing with somebody's inner organs. I certainly feel badly for the critter who's the meal, but I recognize it as "the circle of life" and I certainly want the lions and cheetahs and other predators to live and feed their babies. So I don't find those scenes particularly emotional.

This incident, though, got me right in the gut. I truly almost cried I felt so sad. It was a very simple situation, just a baby zebra who lost its mom. Or whose mom ditched it, I don't know. I don't know why the mom wouldn't come back and look for her child once she realized it wasn't with her anymore. Maybe she was looking elsewhere, maybe she didn't know her baby had already crossed the water? But the baby was calling out for her, you'd think she could hear.

I first noticed the baby, nearly covered in mud from the crossing, because I was just snapping pics of the various youngsters, I think zebra kiddos are really cute. He stood out, and looked decidedly lost even at first sight, standing still while a constant stream of zebras moved purposefully all around him. 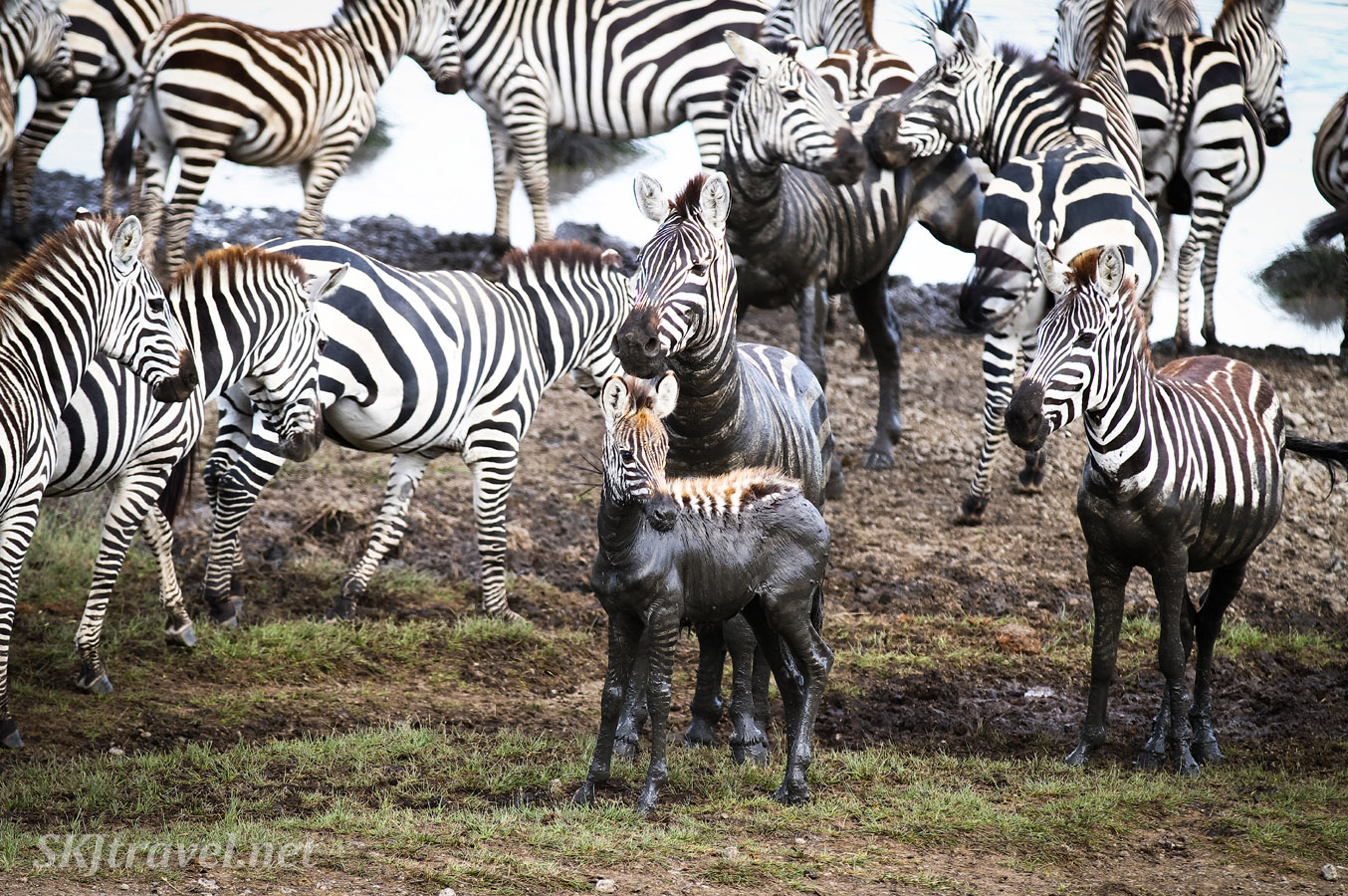 Sometimes little ones would separate momentarily from their moms and maybe run around a bit and buck, getting rid of energy. But they always reunited and moved on. I noticed this one kept walking back and forth down a 30-yard stretch or so of ground on this side of the water. Walking slowly, looking around all directions and sometimes stopping to call out. Then he'd stand near the water all alone for awhile. 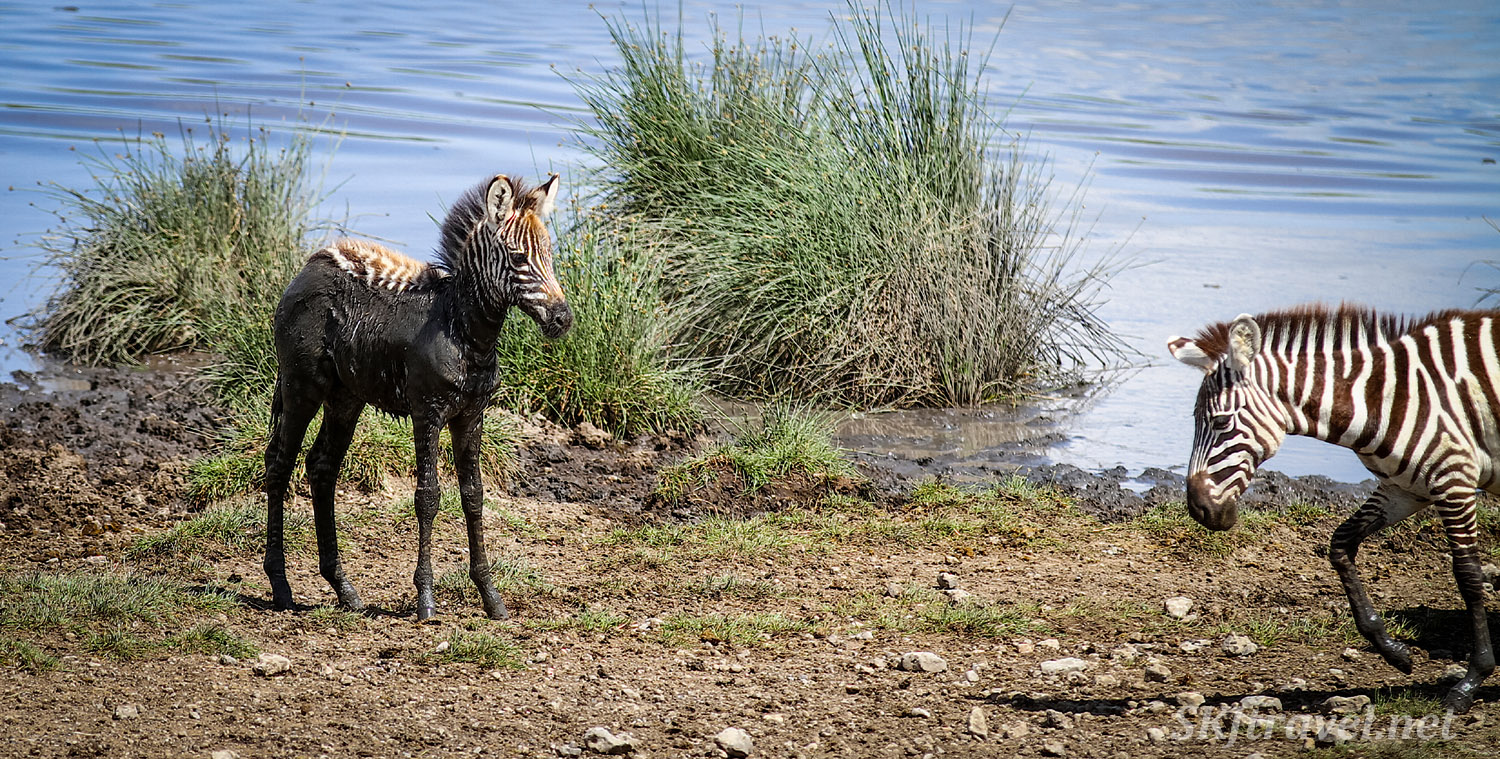 Then walk back and forth. Then call. Then to the water. Over and over. He was clearly lost and separated from his mom. He's in the bottom of the picture below, looking out at the water. 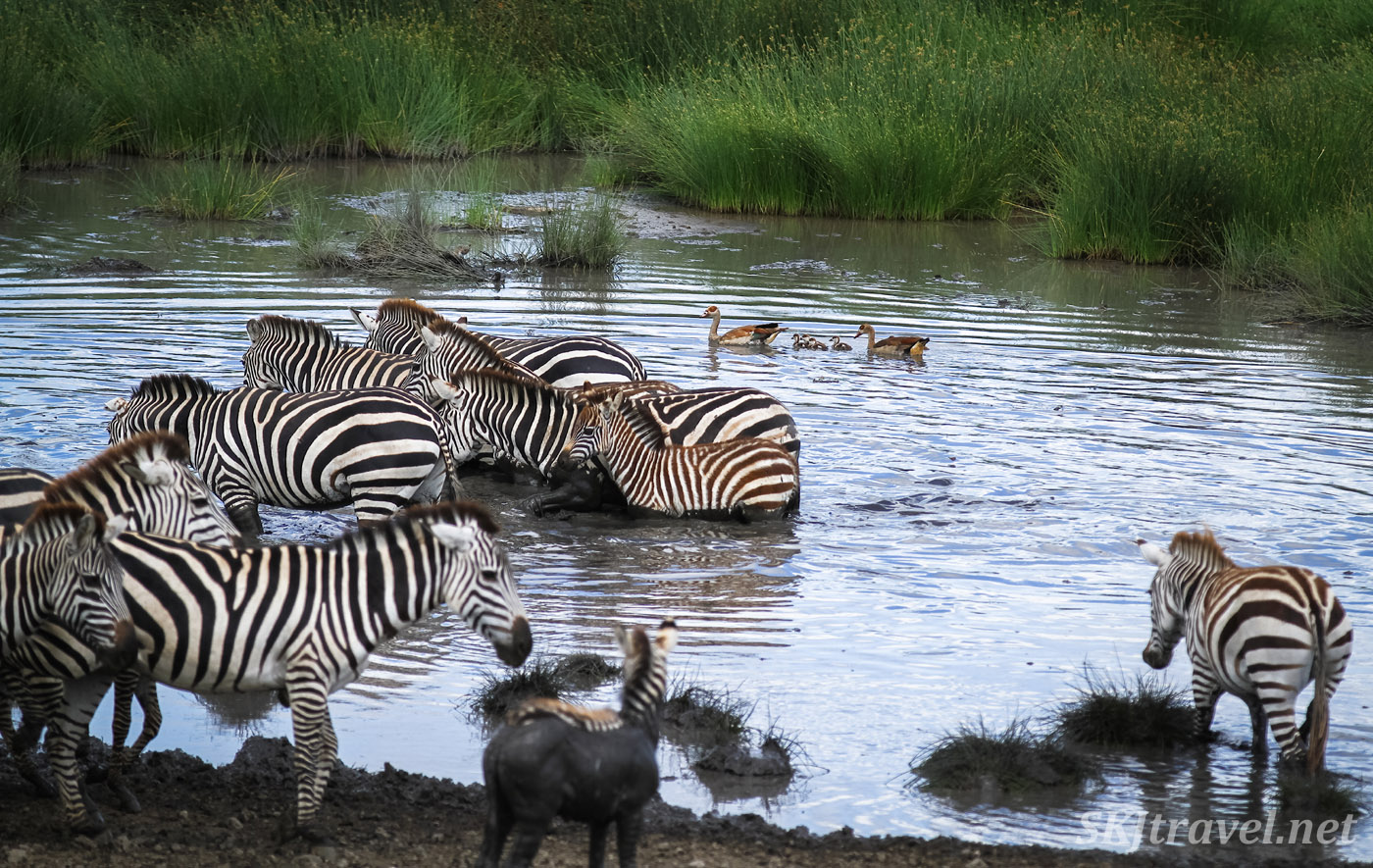 I guess it's just so easy to anthropomorphize a lost animal looking for its family, easy to empathize, to imagine being in that lonely, scared state. I have no idea what zebras feel, if there was any similar emotion passing through him, but I could not separate feeling for him what I would for a lost human child, from how I would feel if I was an abandoned kid among a crowd of happy, united families and other youngsters with their pals, not paying any attention to me all alone. 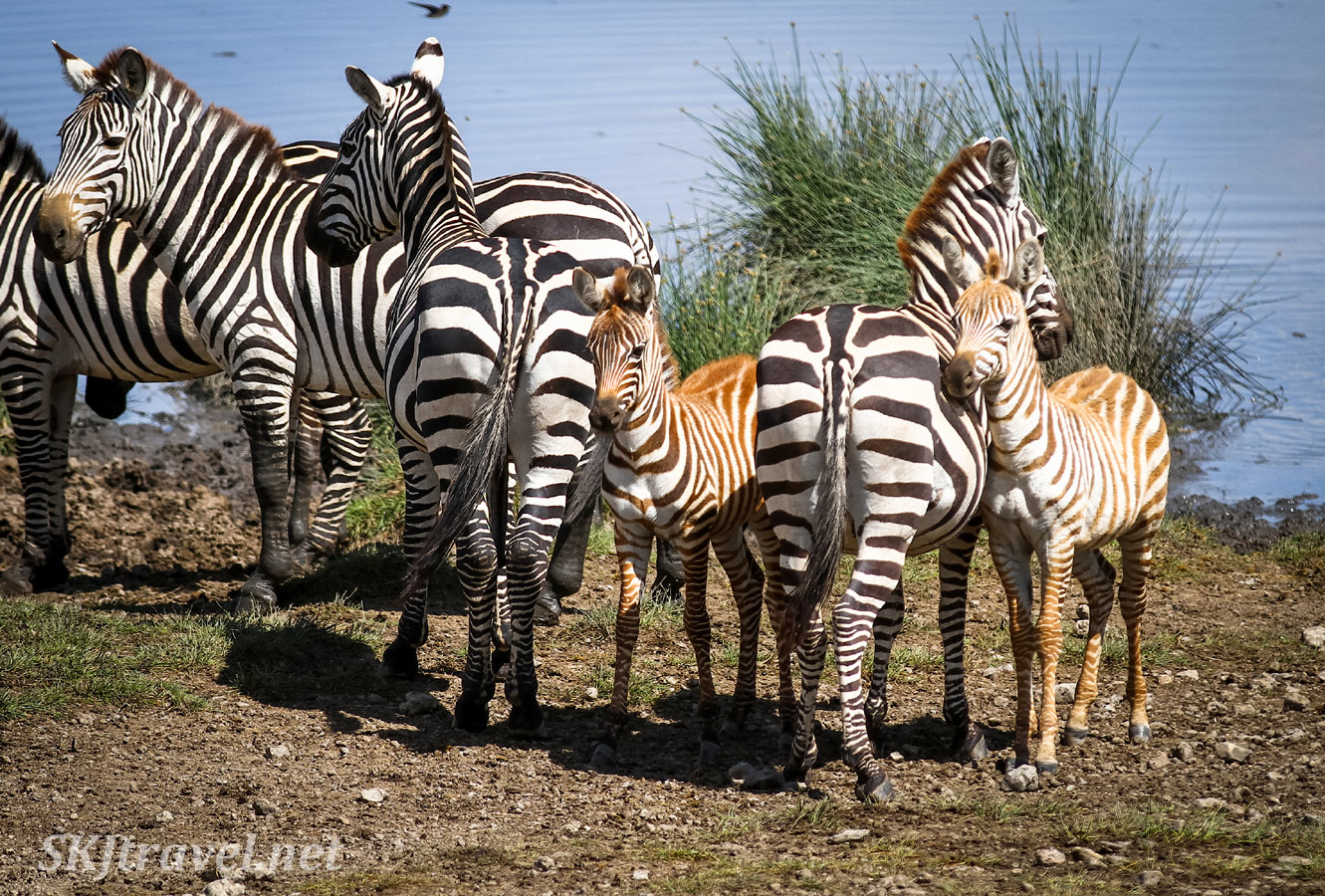 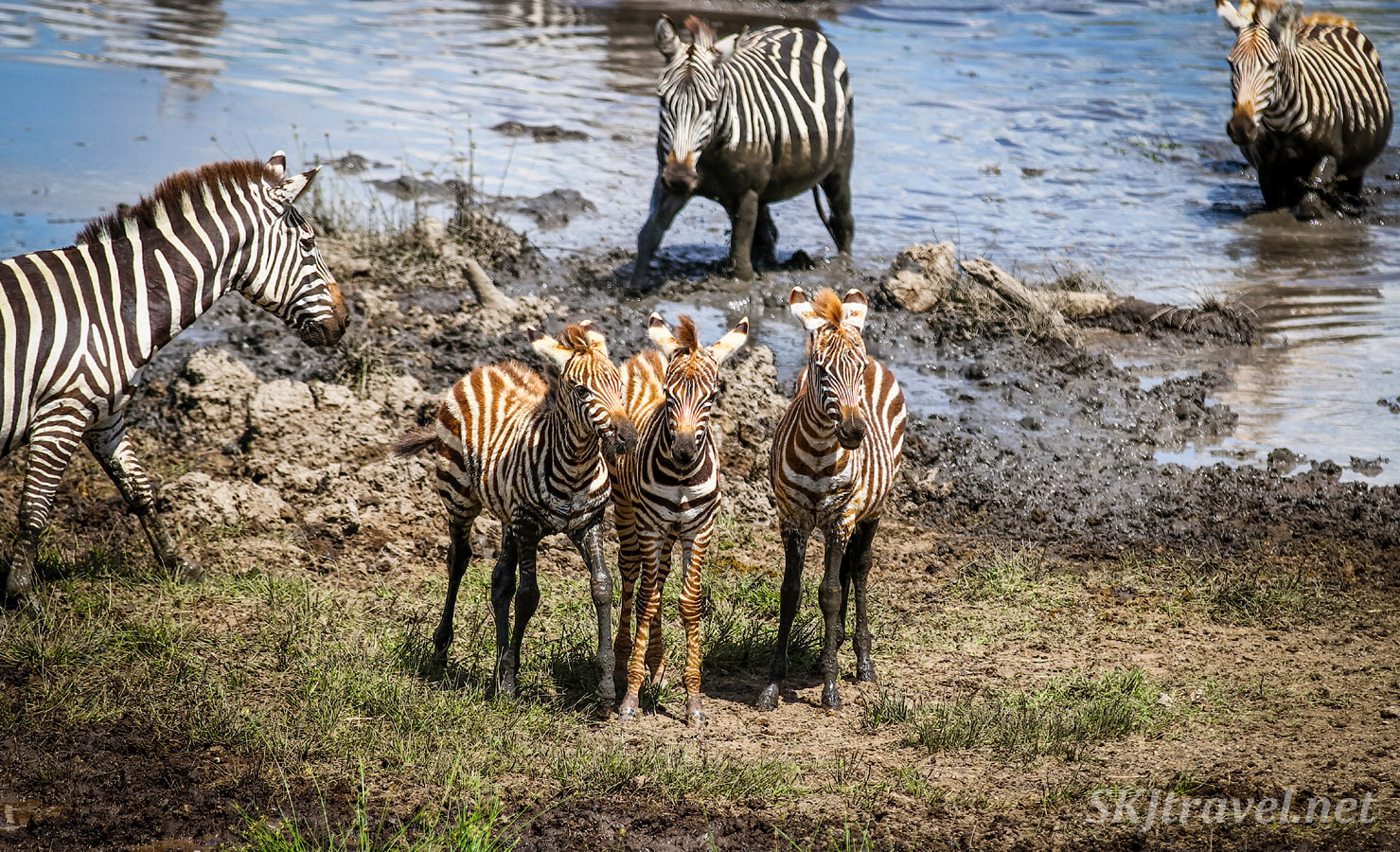 He looked so forlorn, watching all the other kids hook up with their moms and walk off into the distance. Honestly, I could barely stand it. 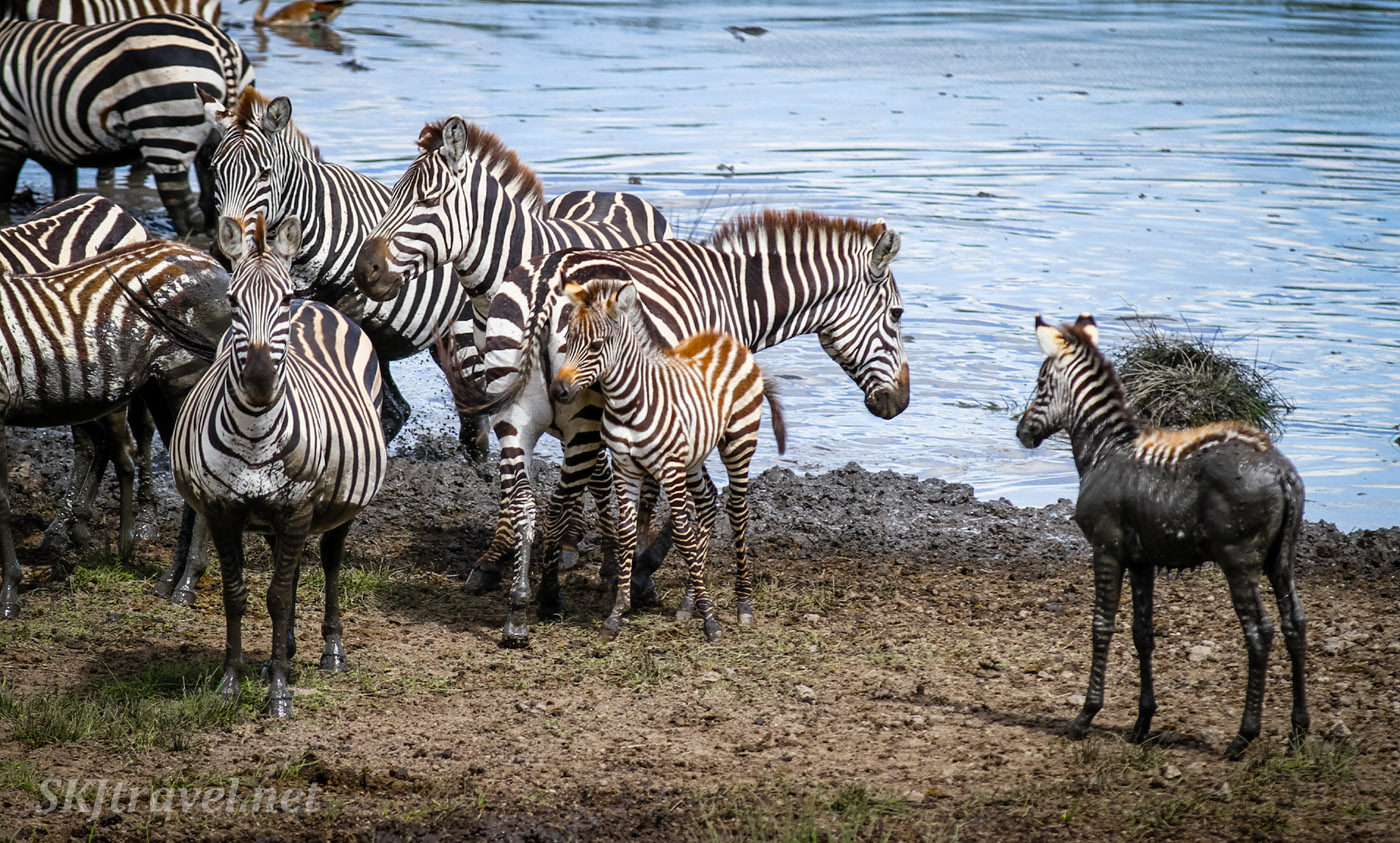 I would have given anything to go pick him up, put him in the car and drive him around till we found his mom, haha. But I must say, I was very disappointed in his mom for not finding him. It upset me to think she might have just wandered off, disinterested in her child. So ... yeah. There's no happy ending. Sometimes there isn't. The guide said he'd probably ultimately stay with his herd and try to survive as an orphan. I don't know if he was old enough to eat real food or if he still needed milk.

Usually I write Tuesday Tales and feature posts on the blog that illustrate things beautiful or impressive, uplifting, often filled with wonder or surprise, sometimes even humorous. If they're about something darker, they typically have more depth (like the witchcraft posts from Namibia). But occasionally there's just the plain sad story. They're just as much a part of life as the others. So I document them, too.

Hopefully you are not too sad now yourself. If so, here's a few more cheerful pictures to end on. :-) I thought it was cute how these mother ducks zipped around through the chaos of zebras with their ducklings as if it was a perfectly calm pond. In this pic I did manage to isolate one zebra near them, but they would swim around all serene when there were 20 zebras splashing through the water on every side of them. 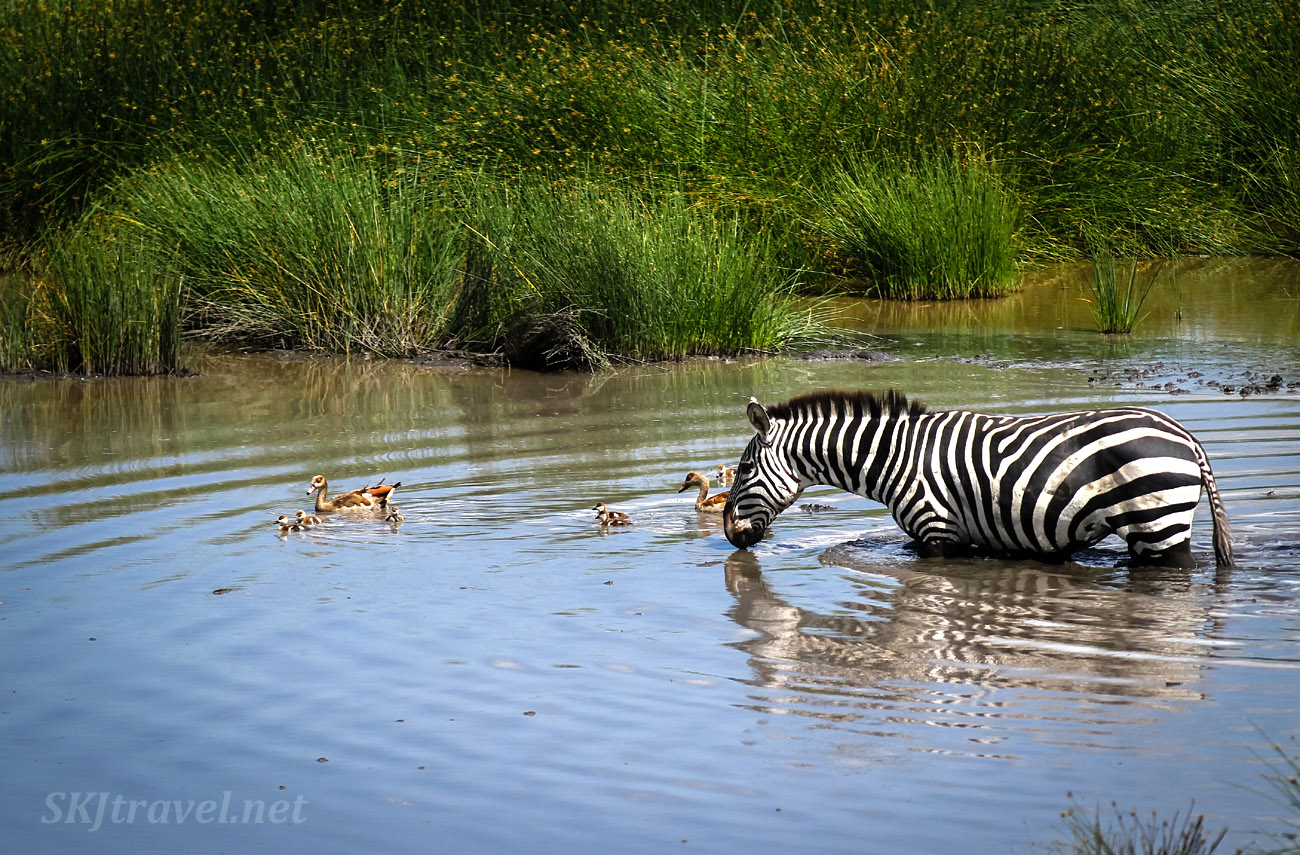 And a simple photo of a zebra at the water's edge. Can't help but notice how seeing a baby all alone is a melancholy sight, but an adult alone with its reflection is somehow beautiful and a little poetic. (though I'll refrain from composing a poem) 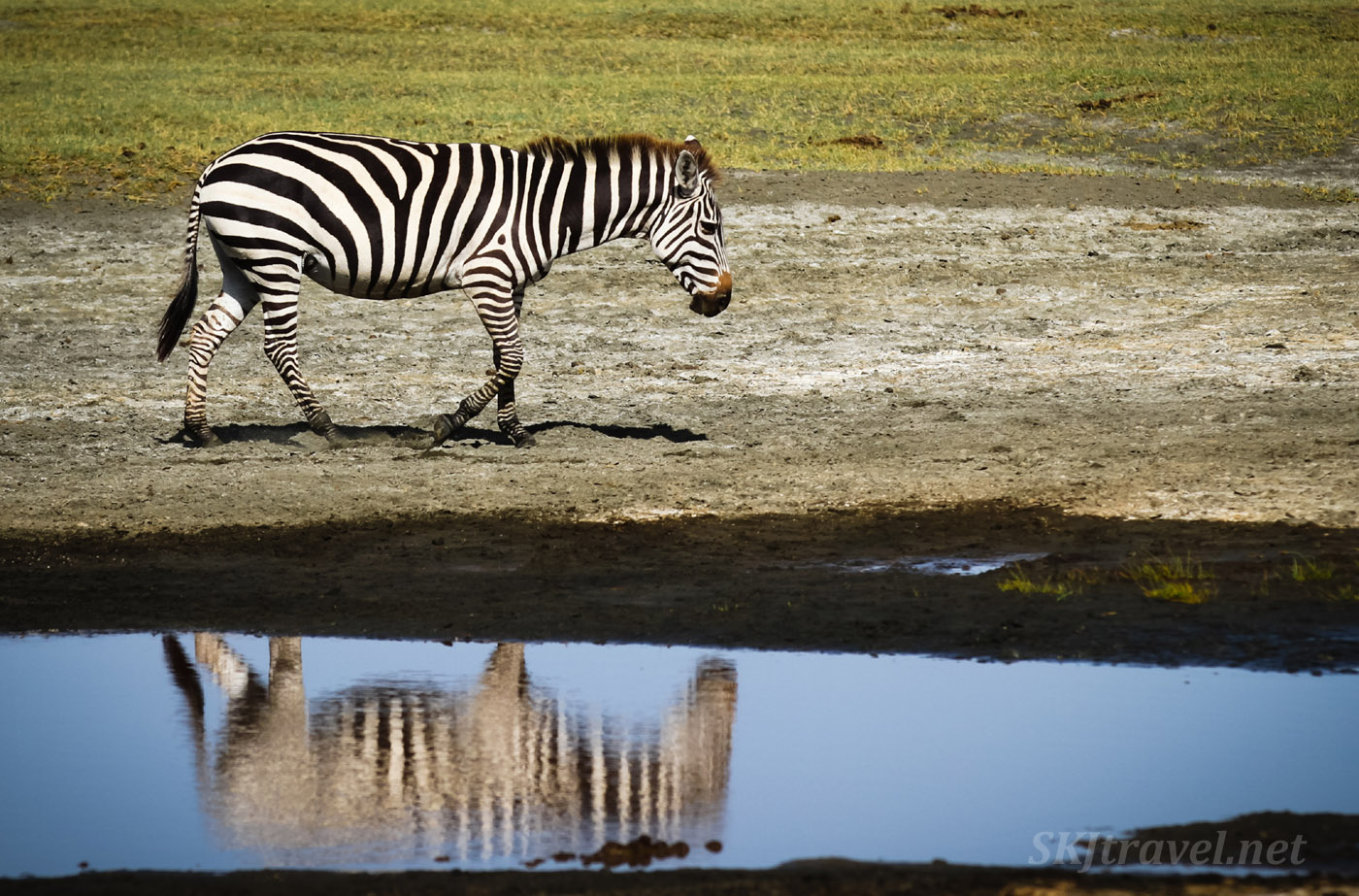