The first year I visited the Popoyote Lagoon at Playa Linda in Ixtapa, Mexico, was 2012. (I had to consult my own Mexico archive to remember, haha.) That first year, I saw a roseate spoonbill couple and was so delighted. The following year, I saw two couples. Hurray! The next year, several couples and a nest of babies. The subsequent year, there were spoonbills left and right. Now, you can hardly throw a cat without hitting a spoonbill. ;-) I mean a stick, of course. What a pleasure it's been to watch the population multiply.

Every year I enjoy taking photos of these unique birds. I often overhear other tourists stopping by the viewing areas calling them "flamingos" to each other. Some years a couple or small group will come through with a private guide and I will get to overhear the guide talking about the wildlife, often picking up some interesting tidbits. People often ask me questions about the animals as if I know, I guess because I'm standing there so long so still, or because sometimes I offer a small comment (such as, "they're actually spoonbills, not flamingos"). Or maybe I just look super smart! This year, a guy asked me if they got their vibrant pink coloring from eating shrimp, or at least from something in their diet. I did not know the answer. The very next day, I got to overhear a guide talking to his clients extensively, and he mentioned that the birds get their pink color from eating shrimp. Just like flamingos.

Every year I try to capture them in flight. It's difficult because they fly such a short distance, it's amazing how they can open their large wings to full span and fly around such close quarters. The best, in fact nearly the only, place to watch them flying in close proximity (vs. high overhead) is a small viewing platform, its orientation is such that the birds are usually flying across my field of vision, left to right or vice versa. There is one other viewing spot that has a much more limited view, basically directly across the lagoon from the platform, so again, birds flying mostly crosswise. But I managed to get a couple shots straight-on just as they were landing or taking off. I just wasn't fast enough on the draw to capture them heading directly at me in flight.

I finally mastered my camera settings enough to get a few shots I'm really pleased with. (I'm just self-taught with my camera; I try to pick up tidbits here and there from professional photographers, but mostly everything is trial and error for me until I figure something out). So here's a pack of some of my favorites, with my most favorite first. I felt really conspicuous when there were other people at the viewing spots and I started shooting with my camera on continuous shooting mode to capture the flight shots ... click click click click click click. Wading through all the dud photos is worth it, though, when I find one I really like. 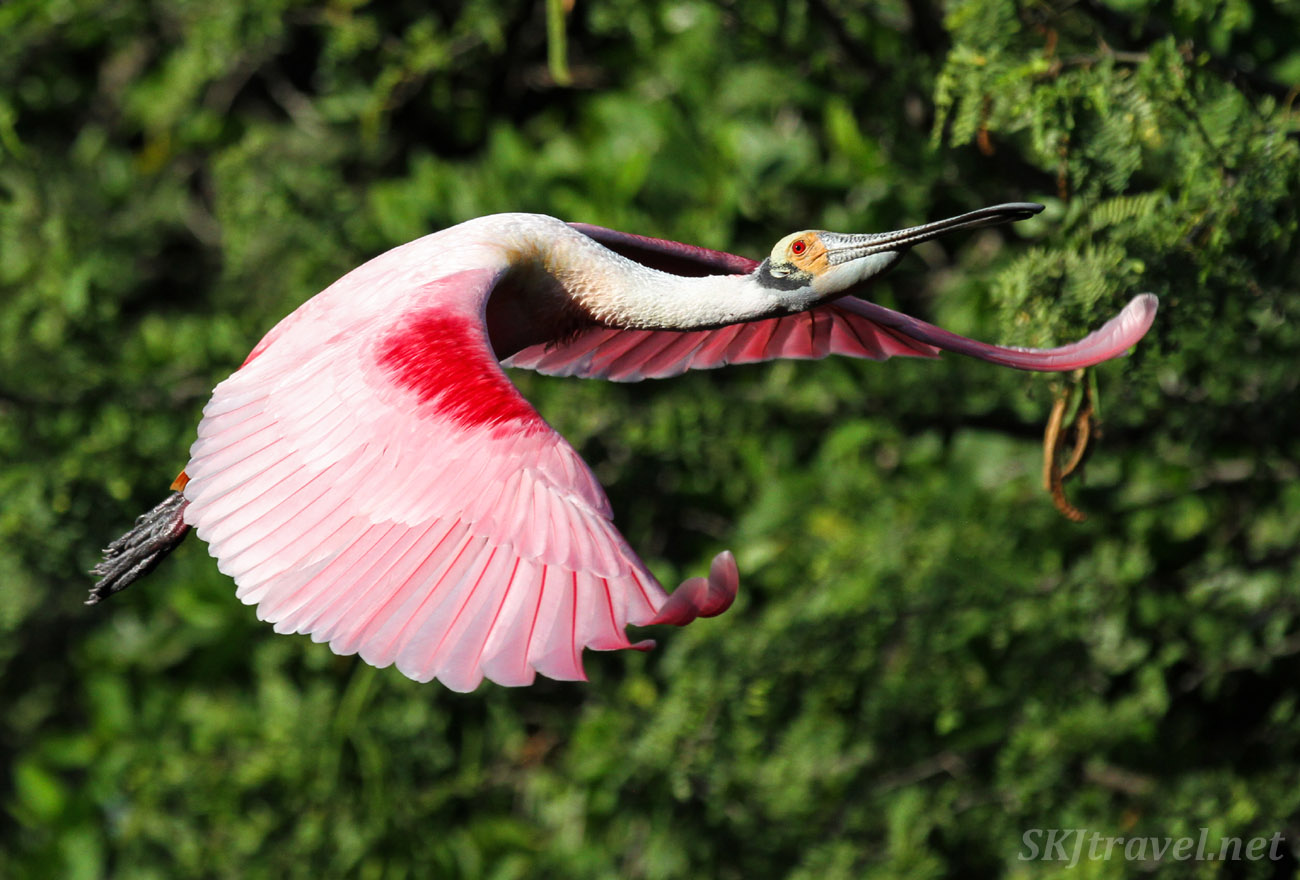 This is my next favorite. Such elegant wings paired with such an awkward bill ... a truly unique creature. 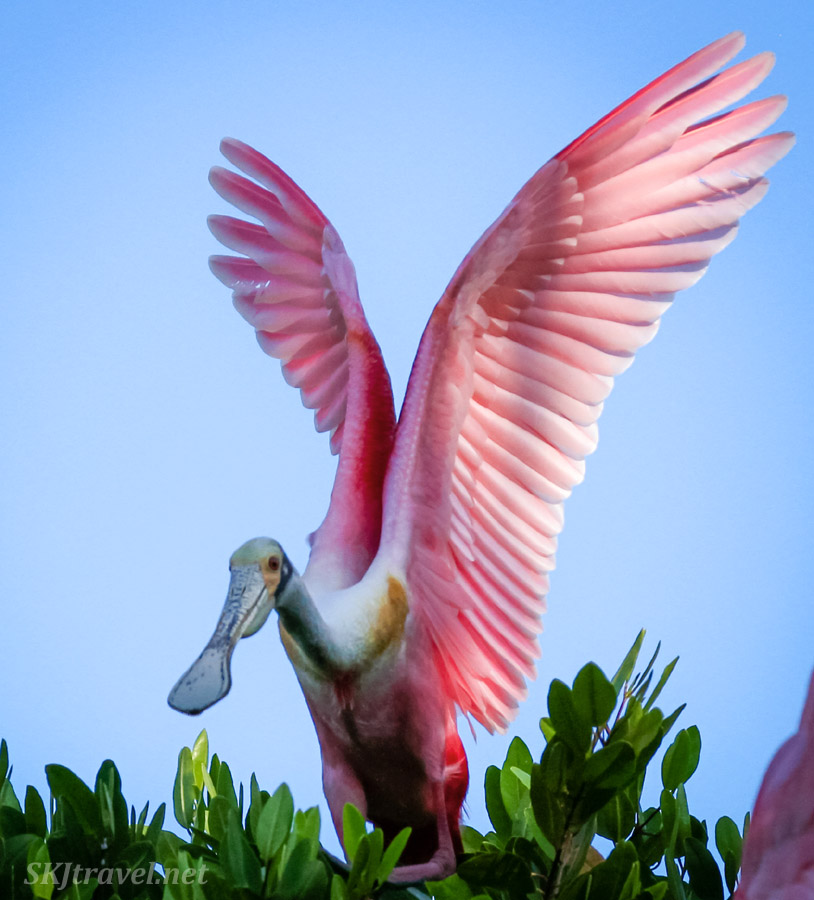 Another shot straight on. I lightened it up a bit from the original exposure so you can see better the wing structure he's got exposed for us. Pretty interesting, I think. But I also think the bird looks a little sinister. 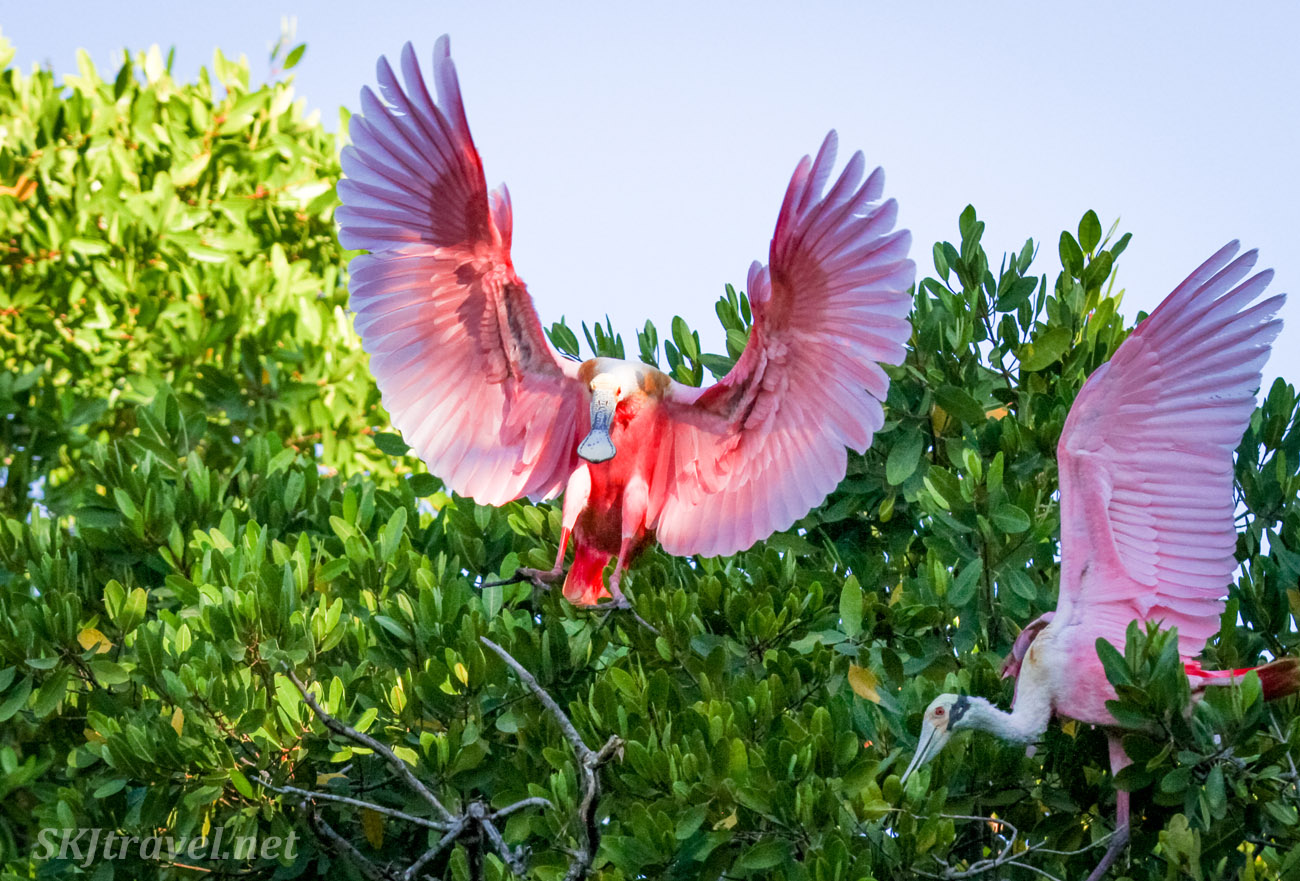 Here are some shots of them in the tight spaces, flying over the lagoon from tree to tree. I like the sideways glance the bird in the first pic is giving me. 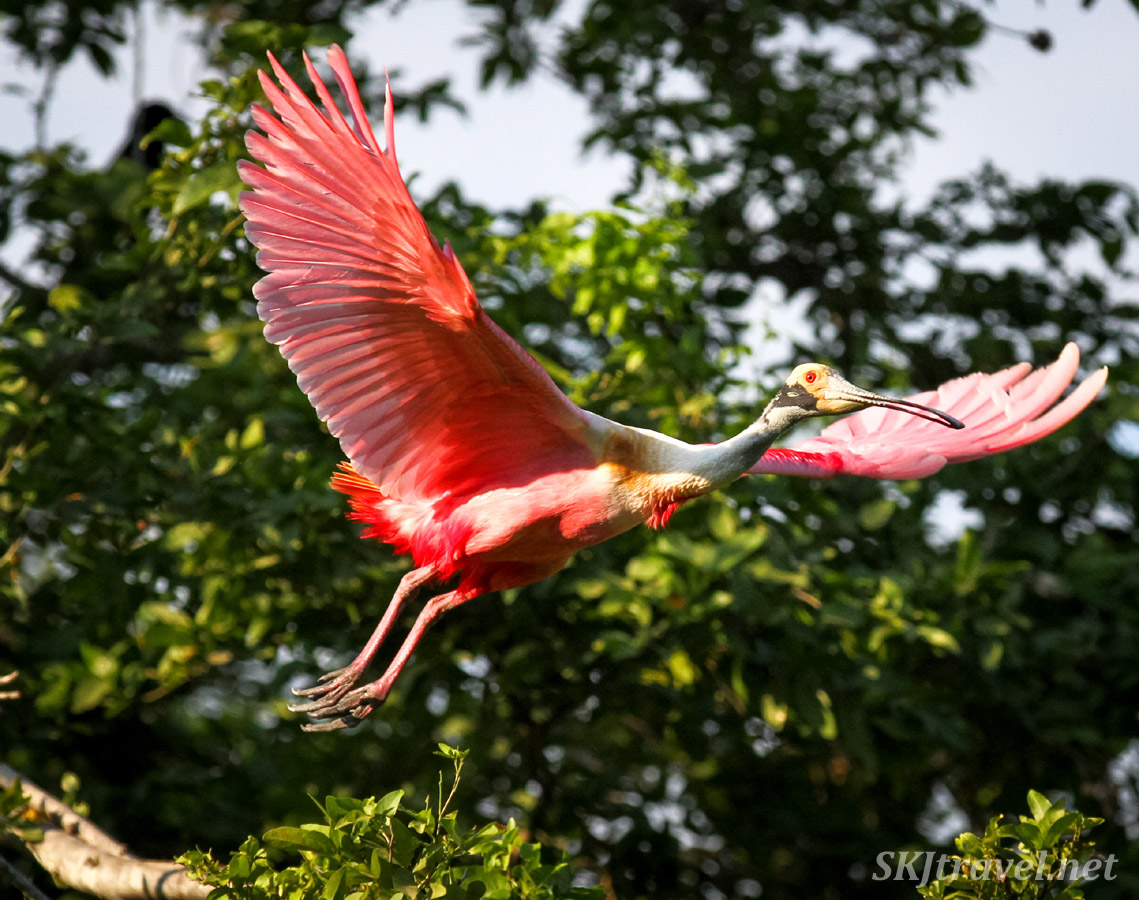 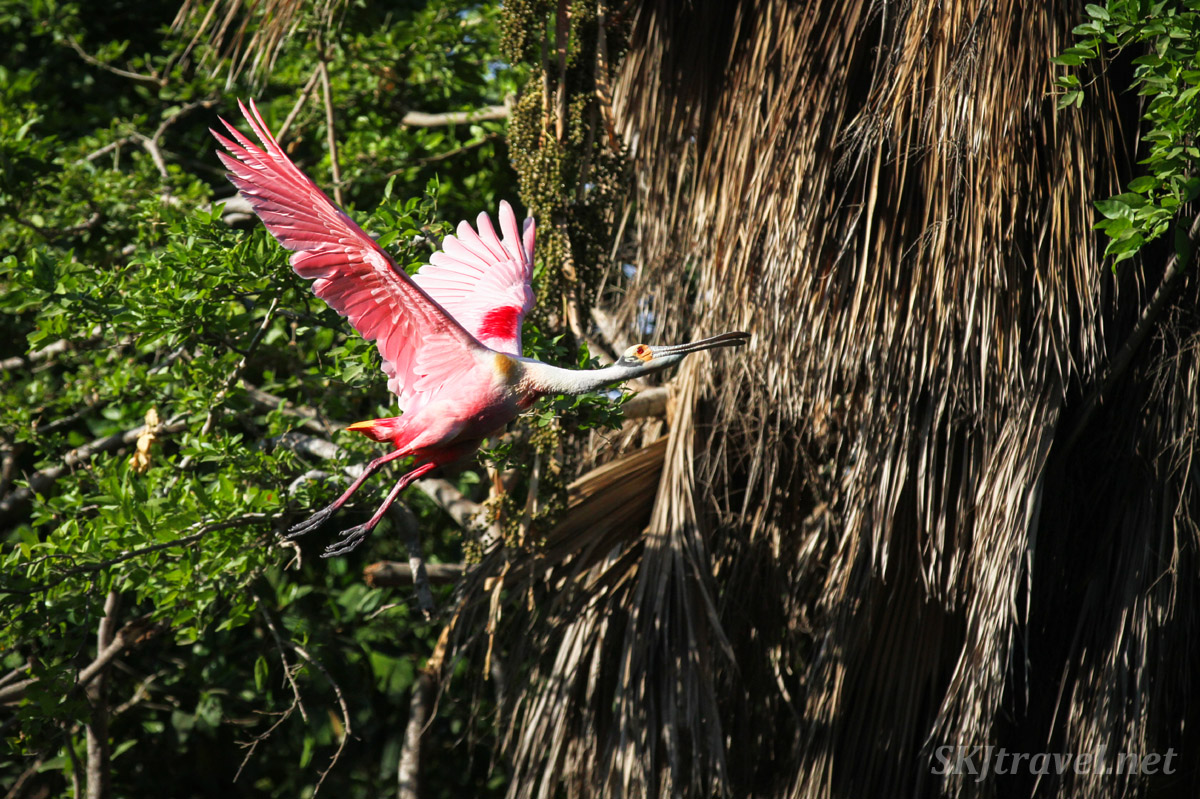 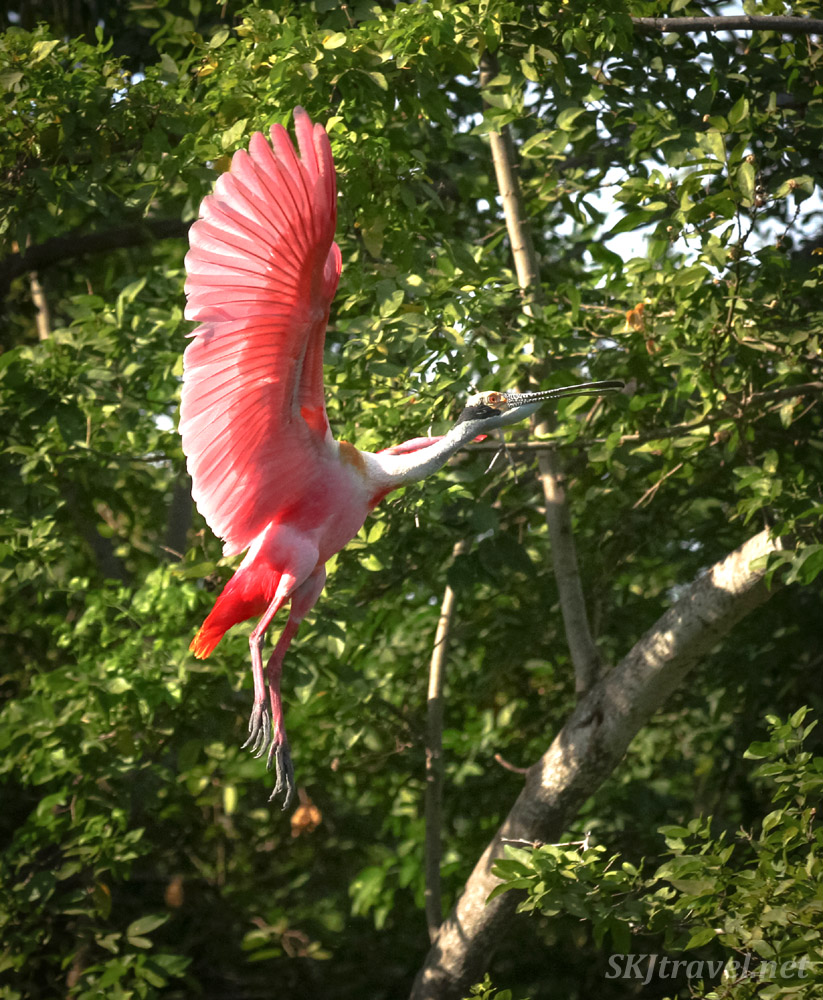 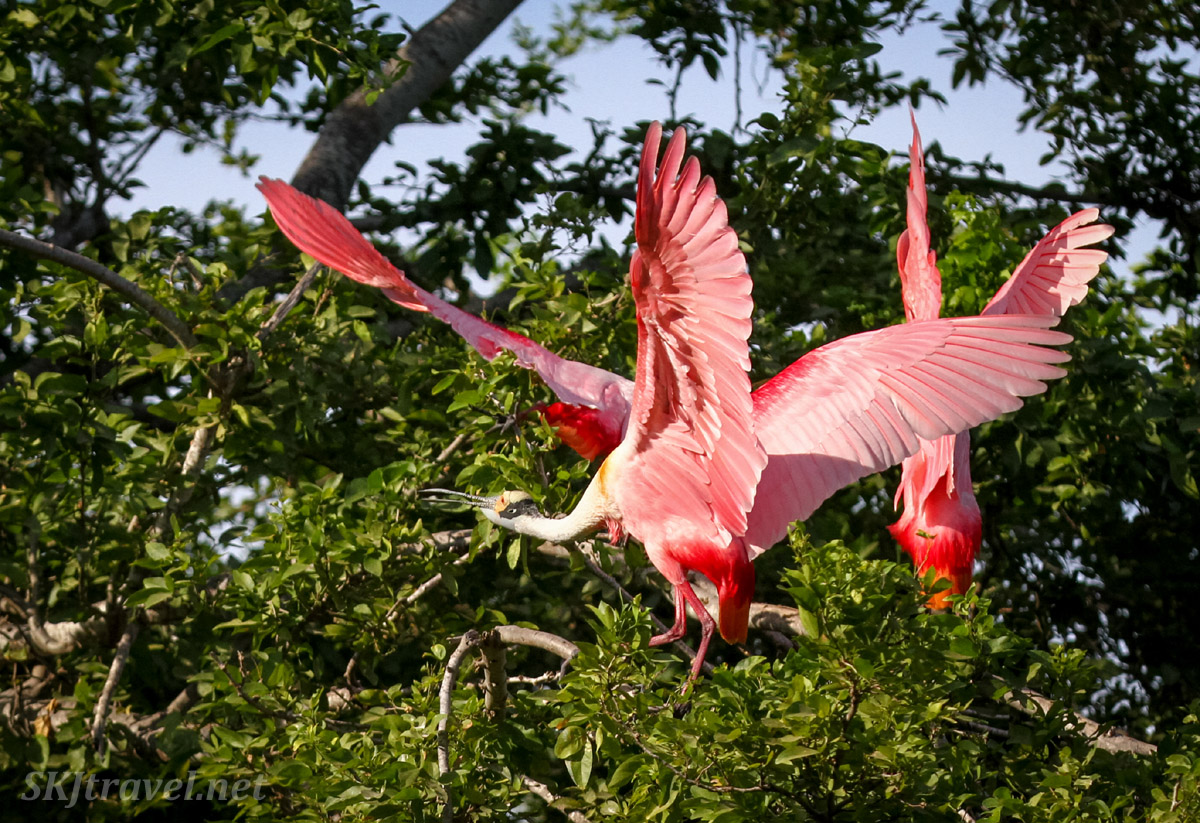 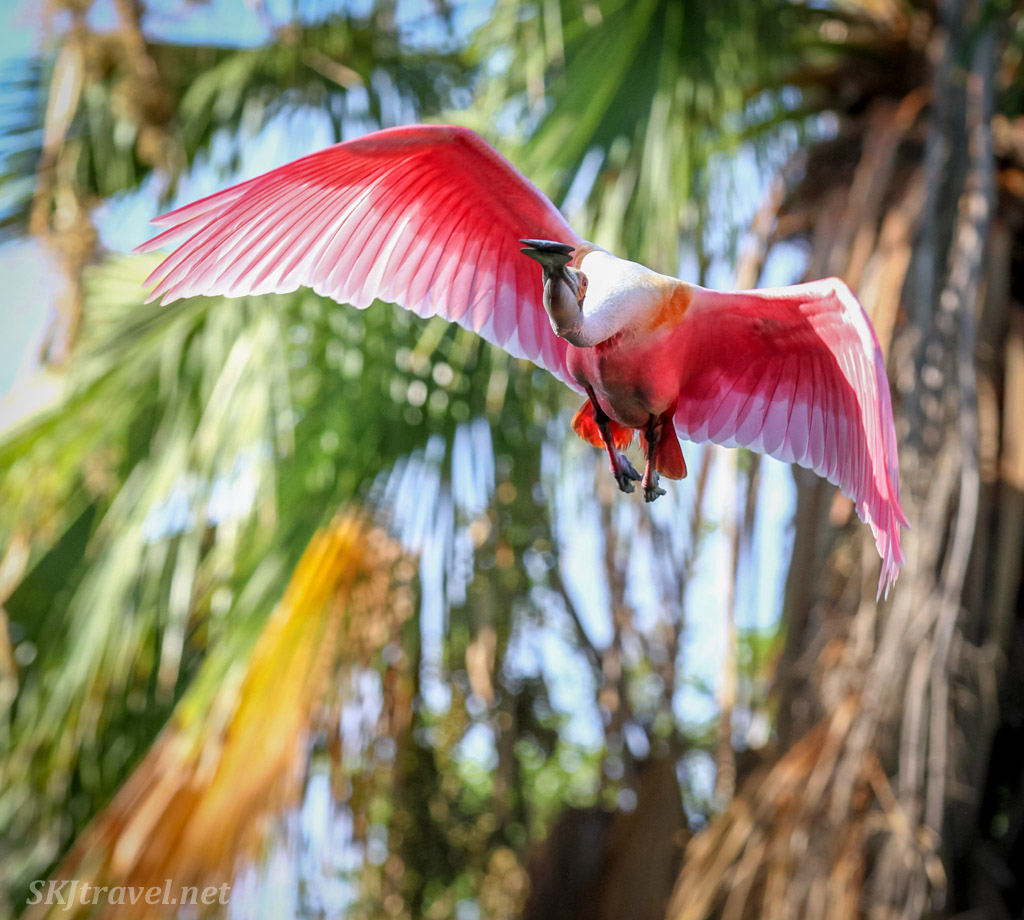 Here are some coming in from the sky above. I kept hearing in my head air traffic control voices -- "spoonbill 424 you're cleared for landing ..." -- as I watched them swooping down toward their leafy runways. 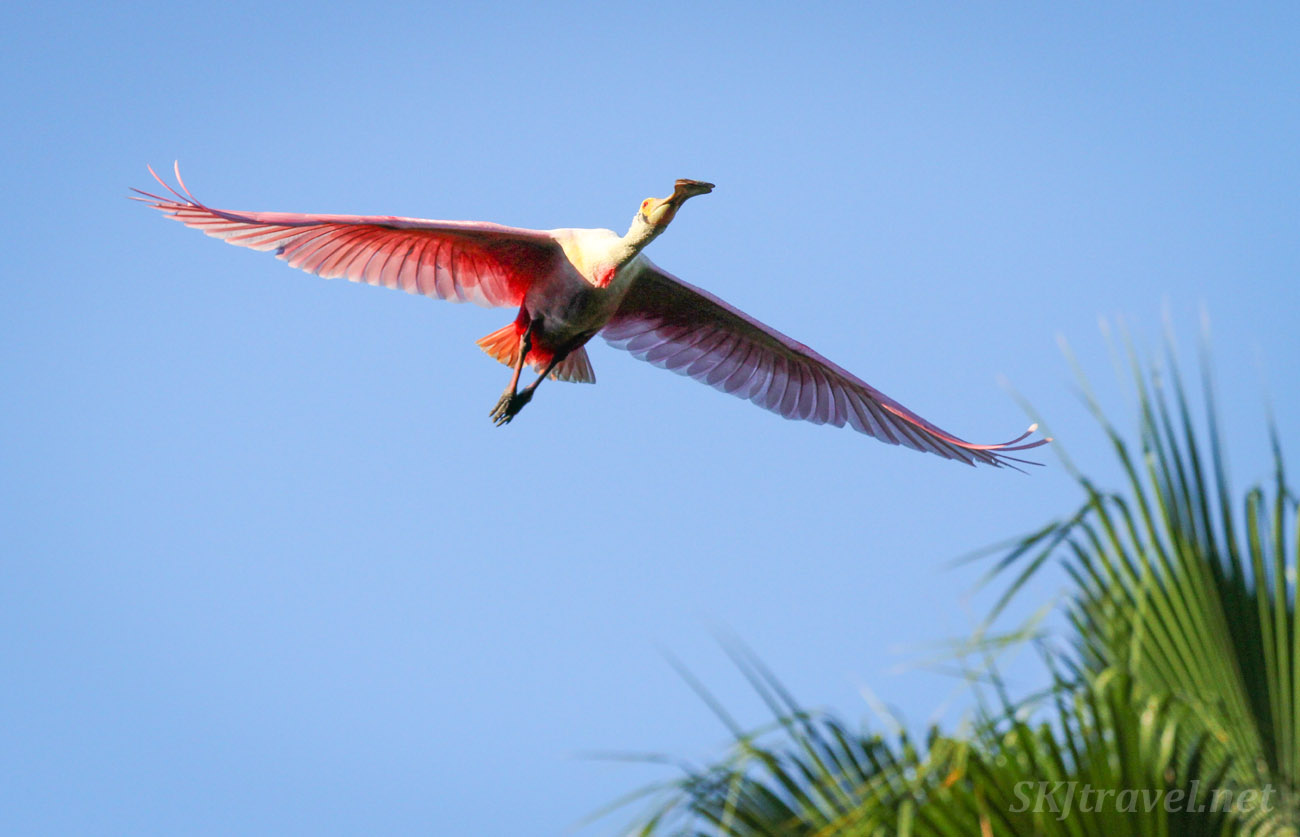 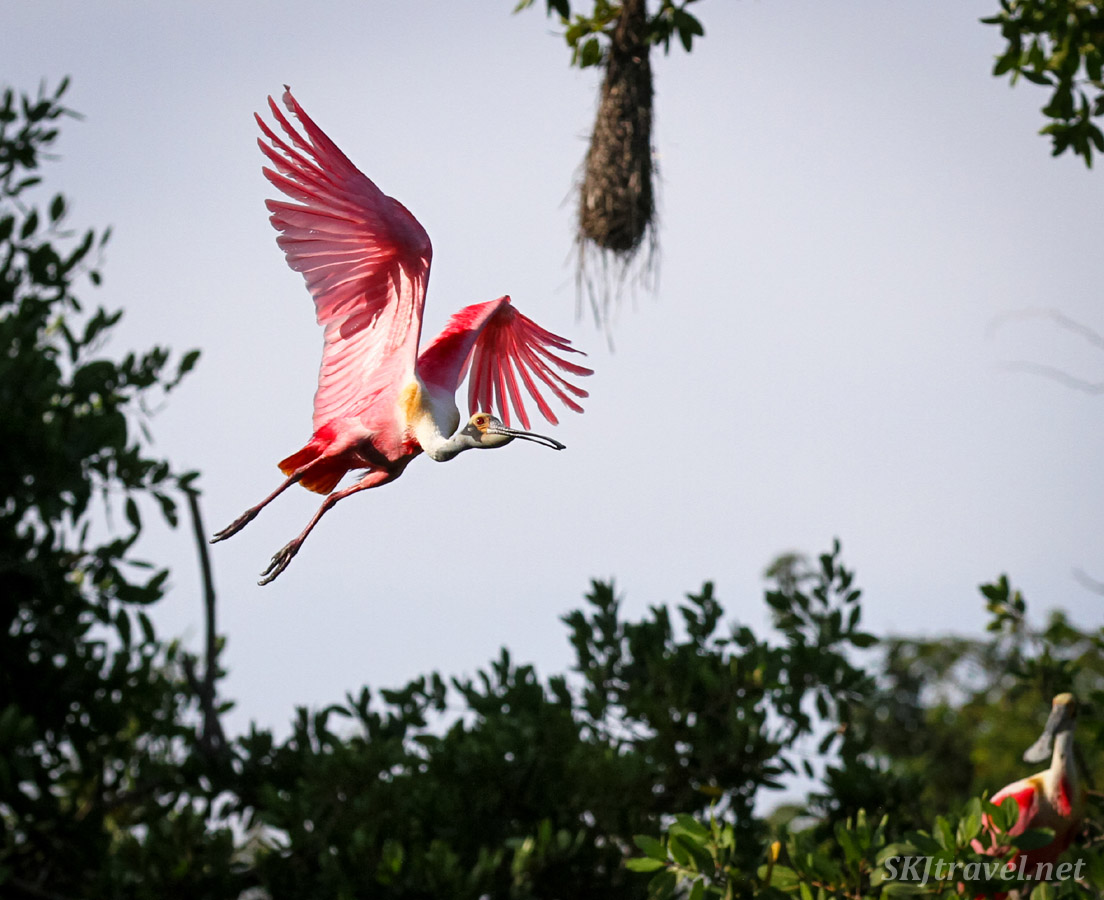 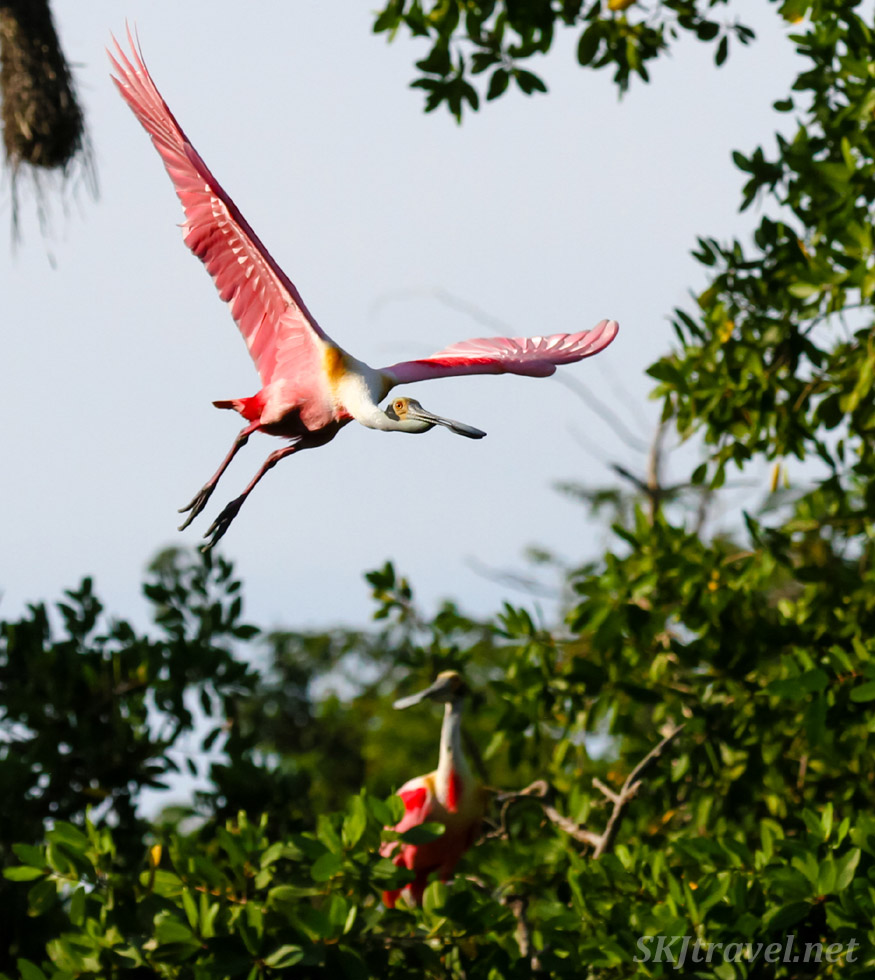 This happened to be the first year I've ever seen a spoonbill actually eating! They're always in the trees or flying high above. Finally I was able to watch one use his spoon-shaped bill to scoop up his food from the bottom of the lagoon. Notice the nearby crocodiles. The truth is, I always presumed they ate something that grew on trees because that's the only place I had seen them! At last one revealed his true nature to me. 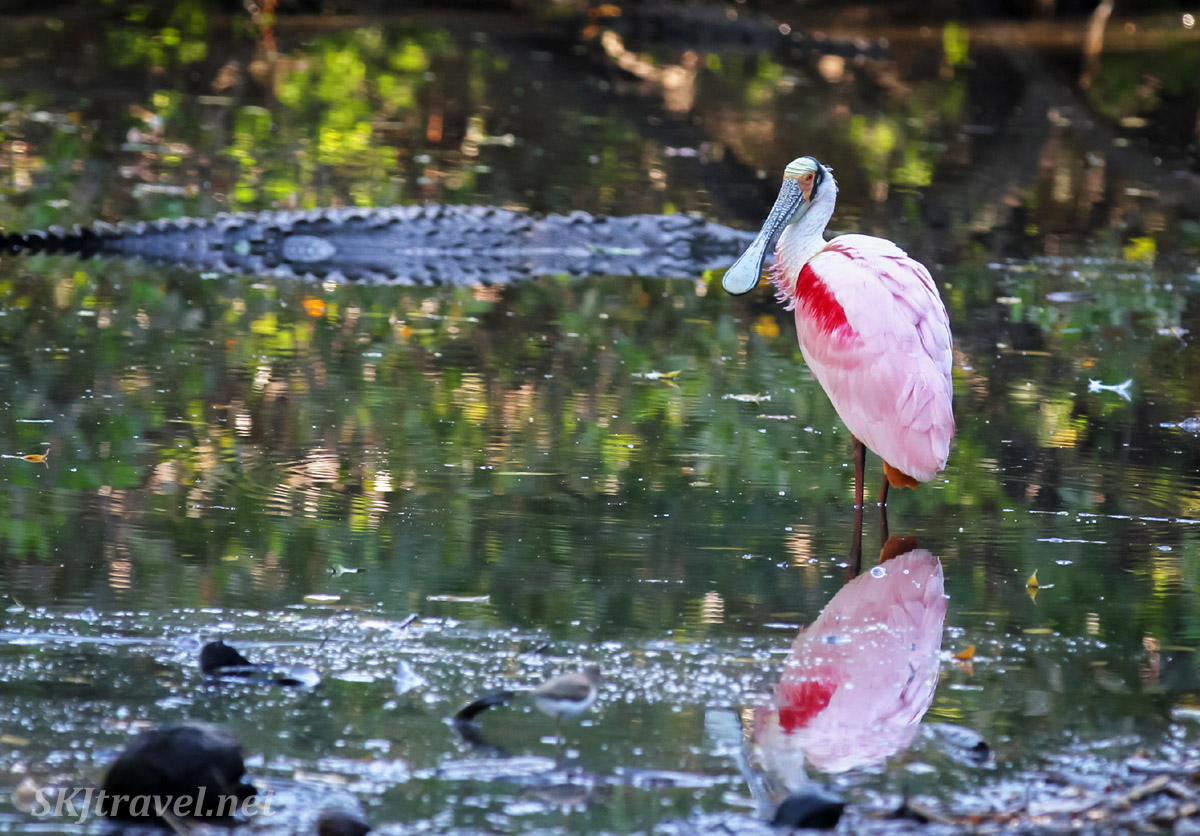 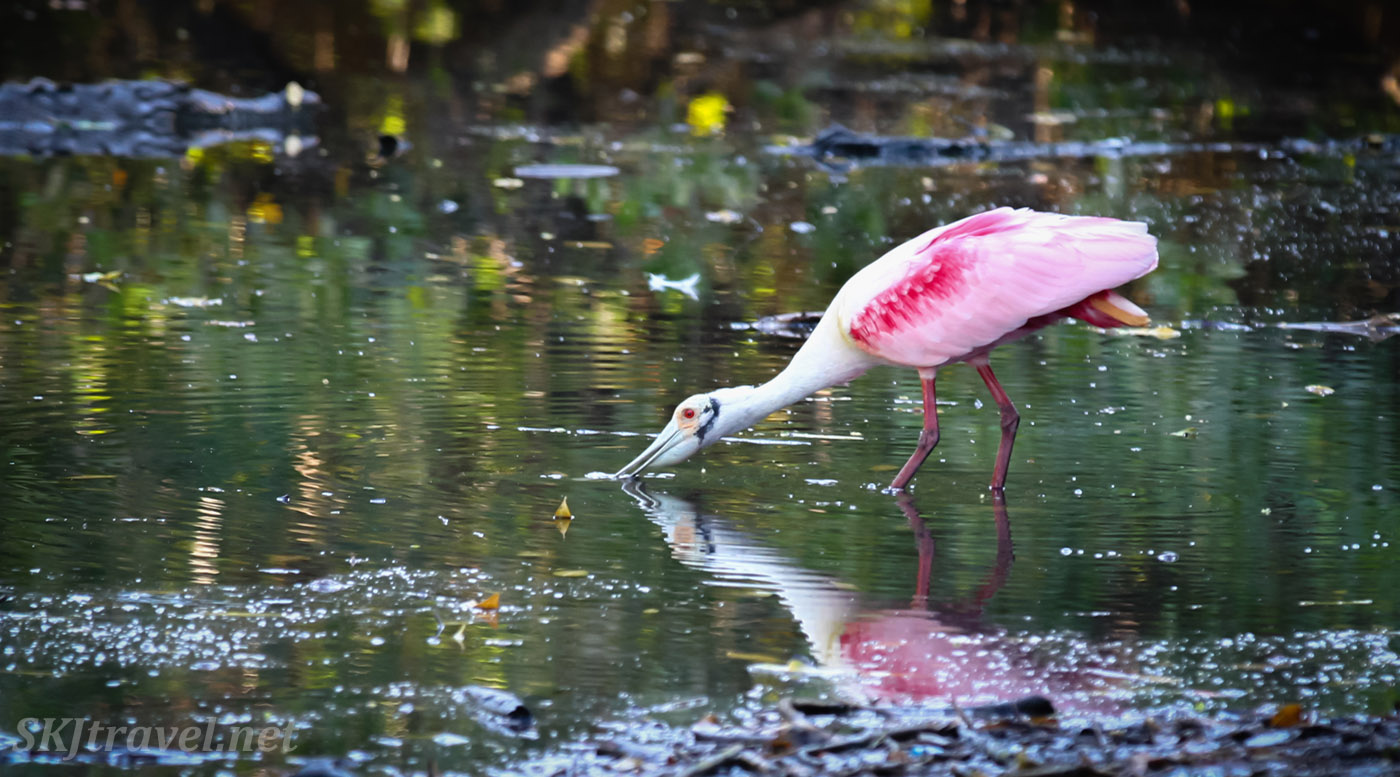 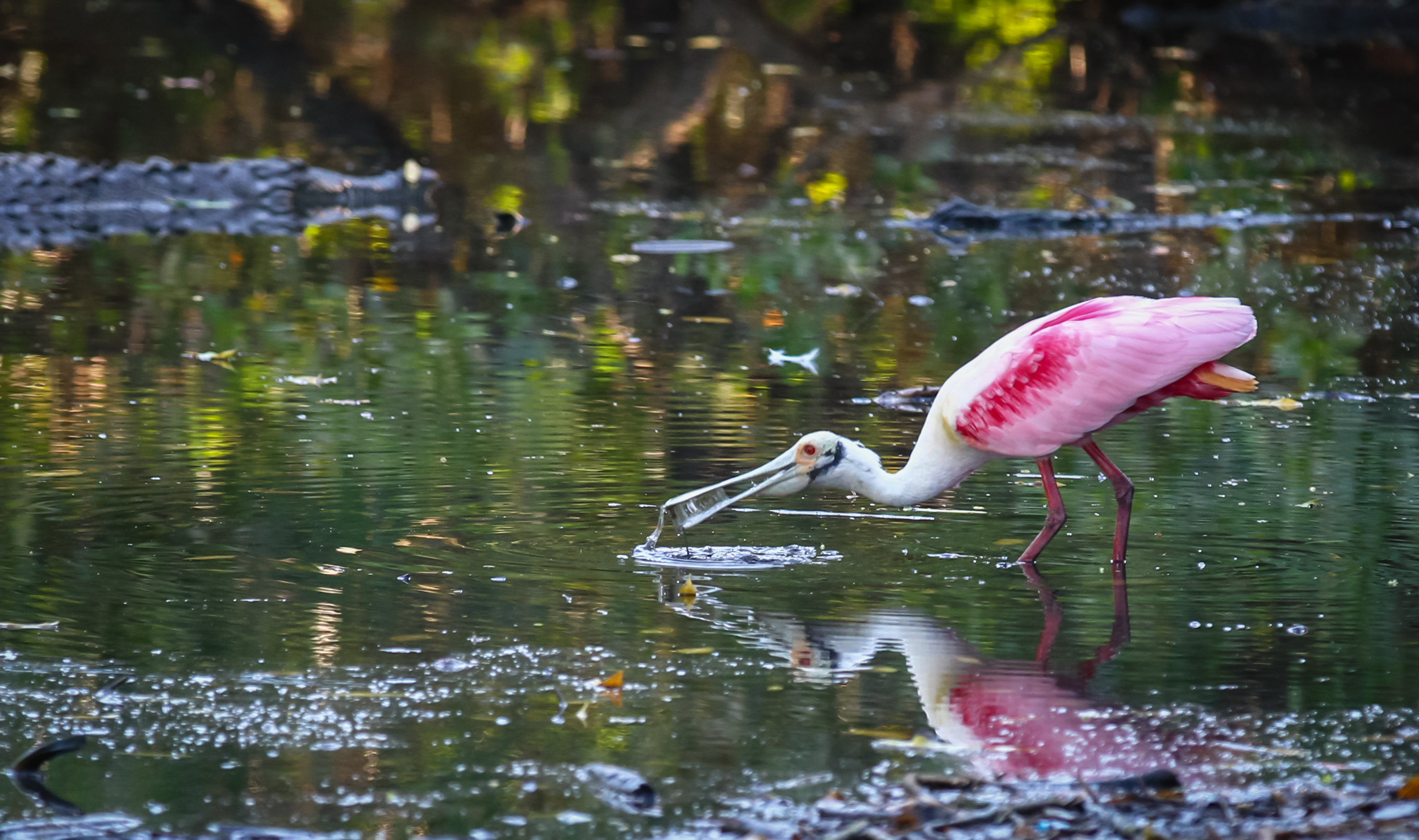 A last peek from a pair of spoonbills, who looked up from their industrious nest-building to pose for a photo. 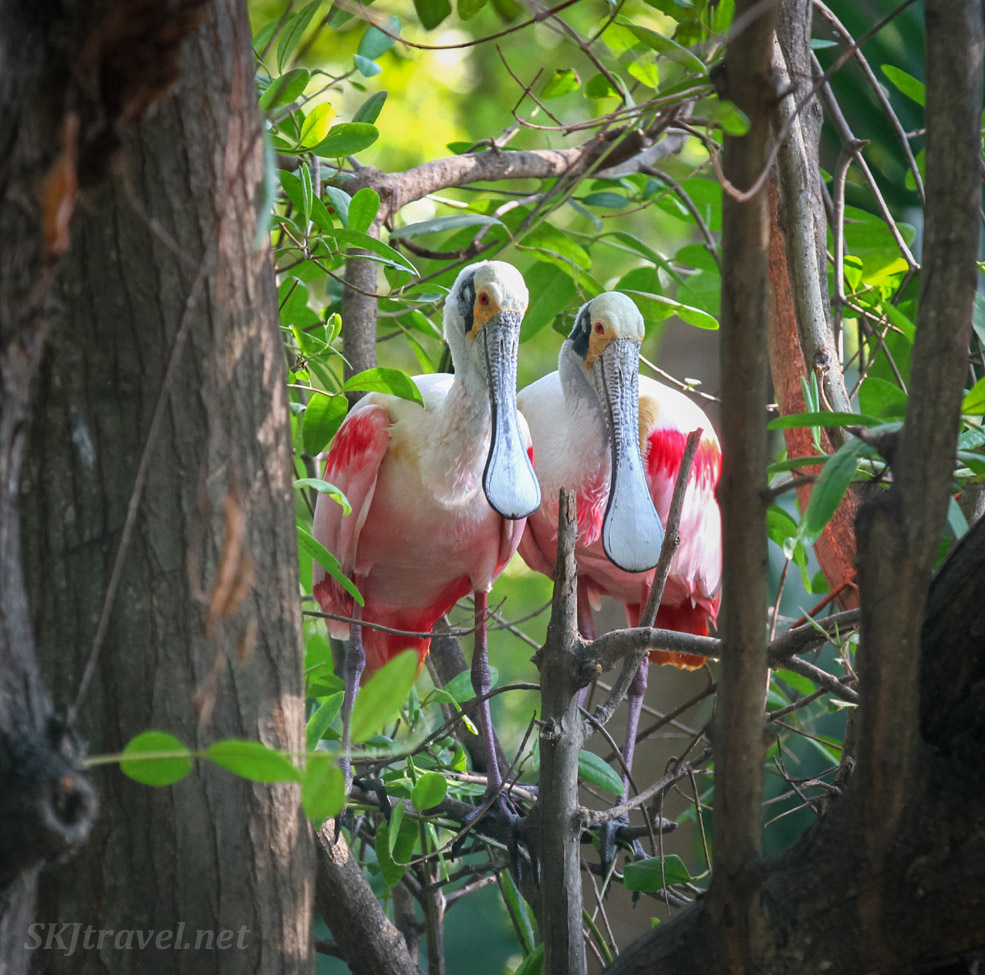