The Dark Heart of Nature

One evening in Chobe National Park in Botswana’s Okavango Delta, we came across a dead elephant, a young bull, in the bush. Alone, collapsed on his side. There were no predator marks on it nor any other animals near it. The scene was spookily quiet. We asked our guide what happened to the elephant, he said perhaps some illness or perhaps just the heat if the elephant had gotten dehydrated, it wasn't uncommon. (in case you’re wondering if it’s hot there, see my post, "A Typical Day")  He said we should come back in the morning, the local lion pride would surely be feasting on it by then. The death of this elephant, lying all alone, seemed intolerably sad, although it was nothing more or less than the natural course of a life in the wild.

We drove back to camp at dusk. We could make out lappet-faced vultures and other carrion eaters perched silently on the bare branches of skeleton trees nearby. As night unfurled her cloak around us, their features melted away to become ominous silhouettes in the dusky sky. 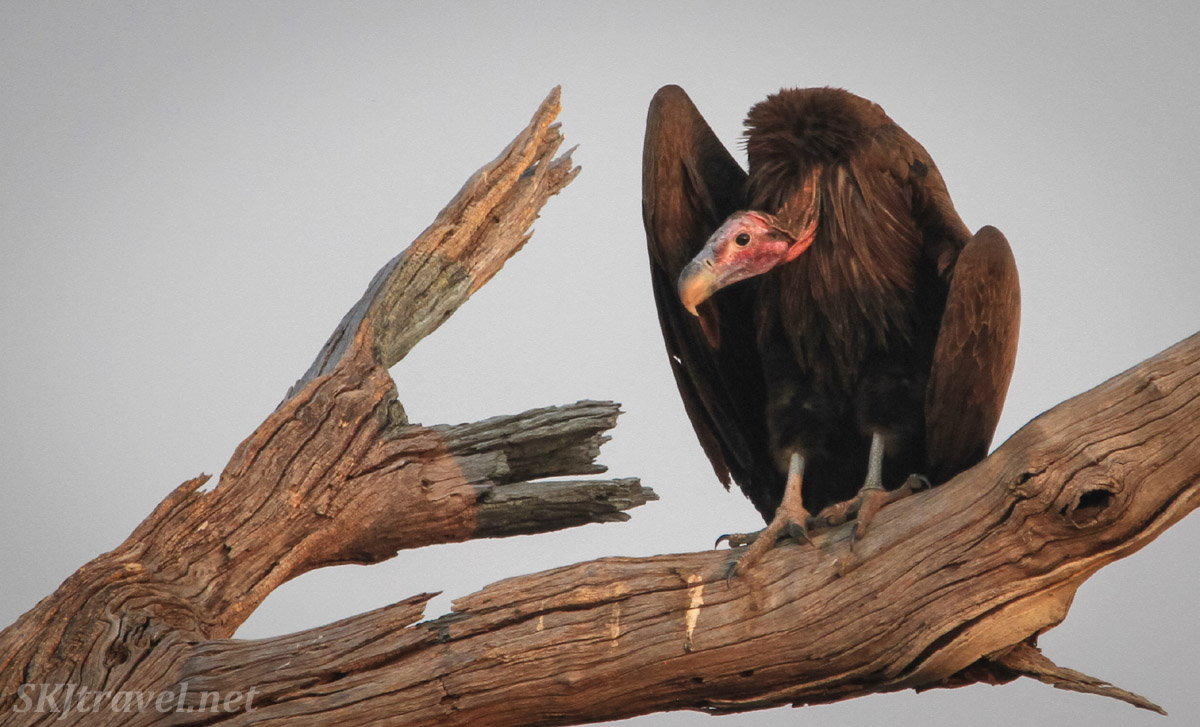 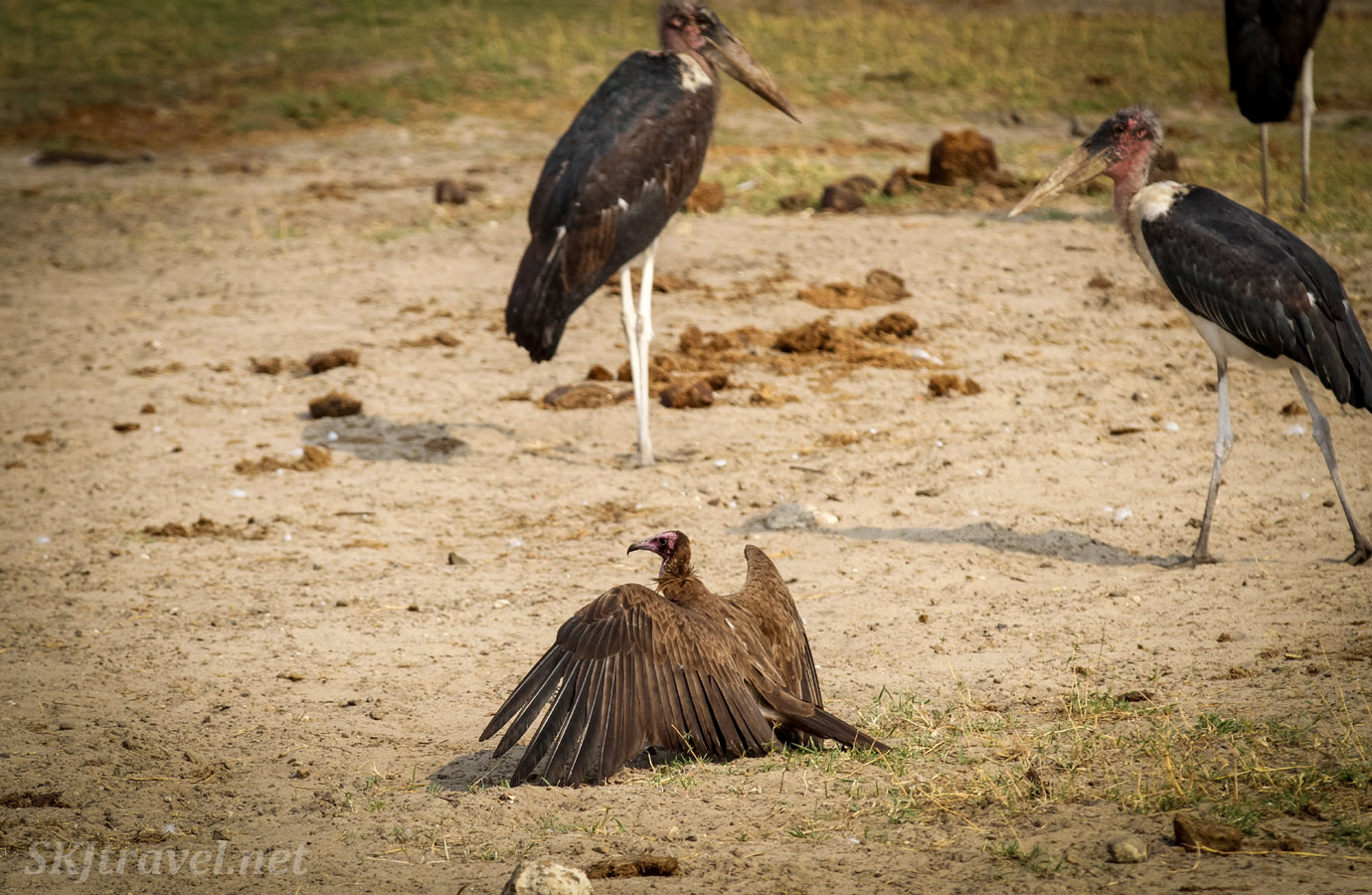 The phrase, "the dark heart of nature," kept floating around in my head. This is the first safari I've been on where I noticed so many injuries on the animals and saw so many dead. I've seen some injured zebras before (from lion attacks) and maybe another injury or two, but the beauty of this place, the Okavango Delta, was regularly balanced with the harsh underside of that thriving grace. Is it that I simply saw more animals? That we spent more time in the parks (the longest safari I've been on)? Is it a harsher place? Looking through my photos, even aside from the obvious injuries we saw, I found many animals with smaller wounds and infections. Maybe my camera is just better? Even the little lions in Khwai had boo-boos all over their legs and paws. 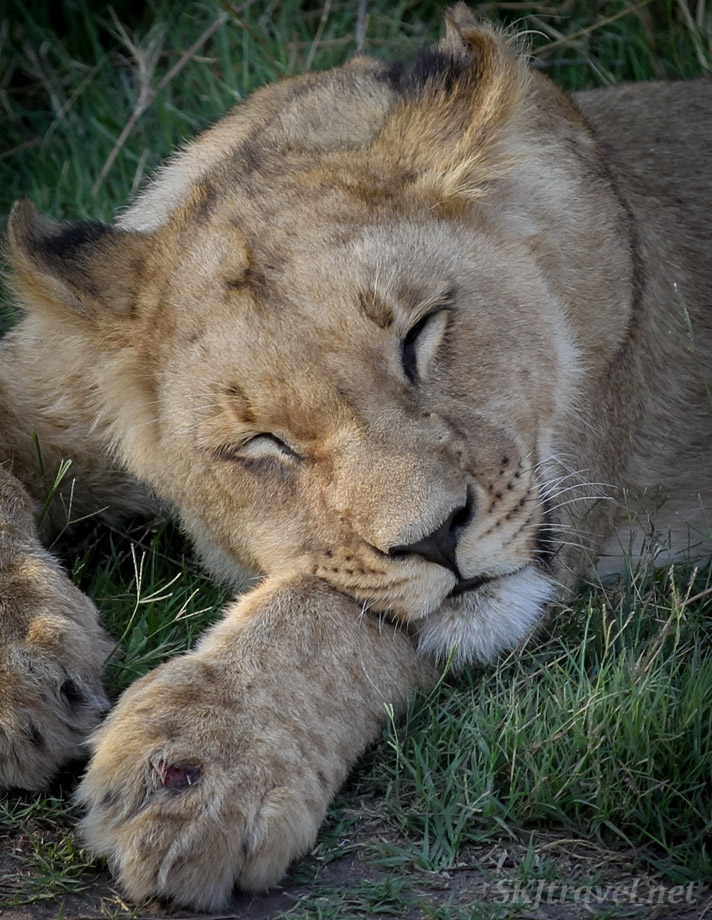 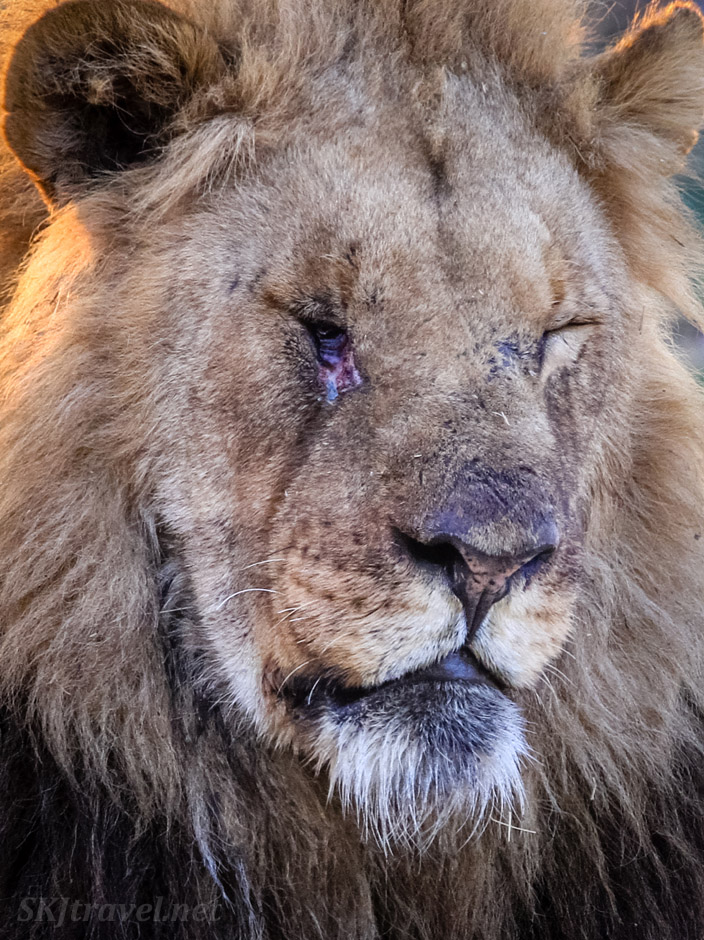 Some of these animals I didn't even take a picture of, it felt awkward to capture the suffering. In Savuti, we saw a wild dog with a broken front leg, it was just dangling down uselessly from the completely broken bone. Another guide said a hyena had injured it in a scuffle for food almost a week earlier! And yet that dog was still leading the pack like an alpha on three legs, though it must be in excruciating pain. One of the mornings in Khwai when we were watching the wild dog pups, the entire pack abruptly took off chasing an impala and one little puppy was left behind, looking all around for his mates. Then one more came through the bushes and so it was two of them frantically looking around like precious lost souls; they had expressions of panic on their little faces. I felt so bad for them, they eventually disappeared together into a bush -- at least they had each other. Our guide said the previous year the pack lost all its pups.

The first baboon has a large gash on the underside of its forearm; the second mother baboon is thriving in spite of her injury (or perhaps a deformity since birth). 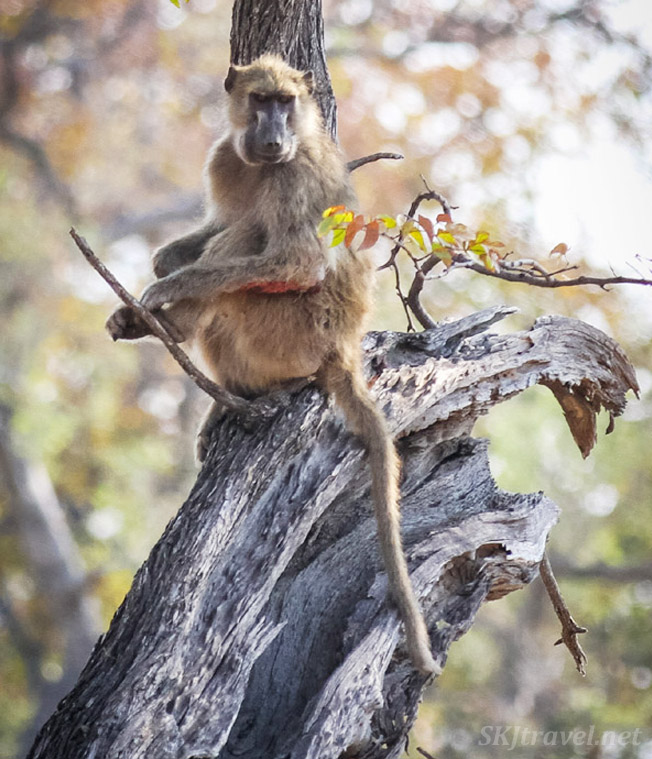 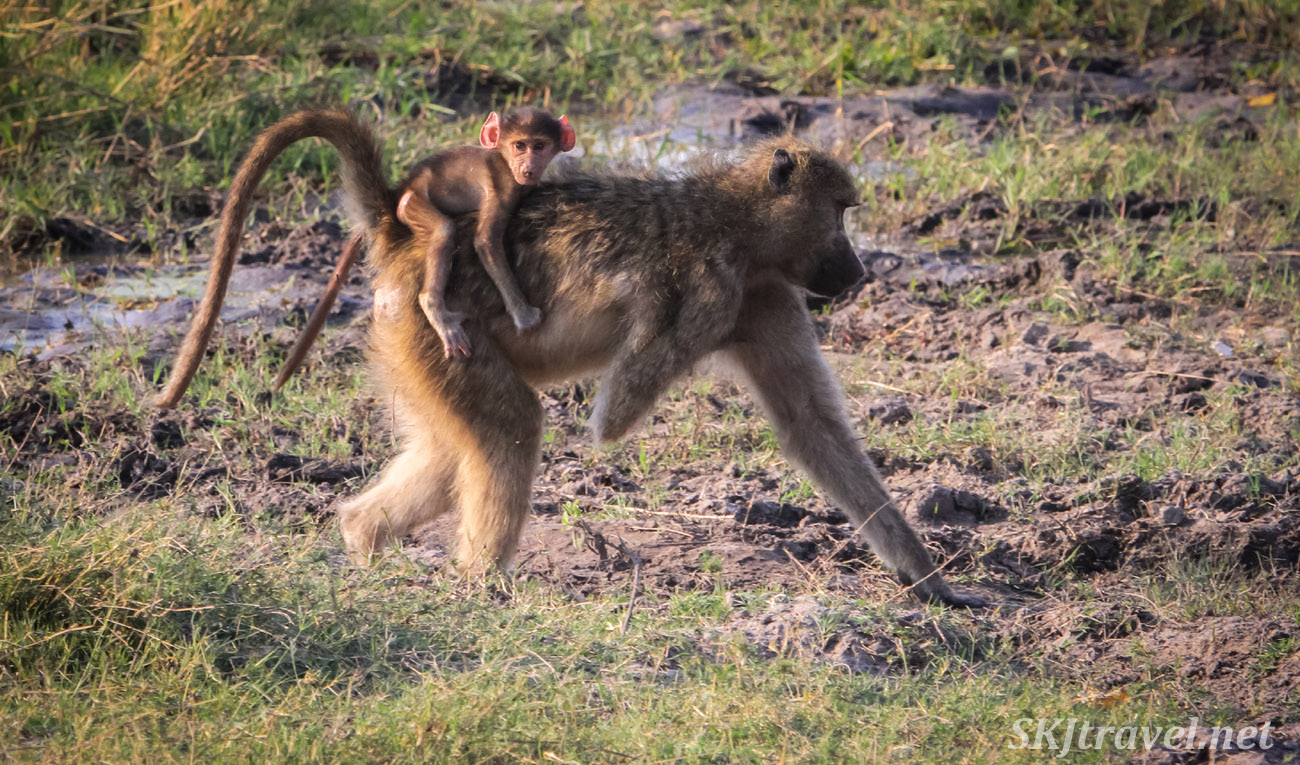 There was one day in Chobe that I thought of to myself as "the morning of death." We saw two dead elephants -- the one mentioned above and one in the river -- a dead and half-eaten genet on the ground, a dead impala in a tree that a leopard had stashed, a zebra that had been attacked by a lion, his hind quarter just a big square of red raw flesh. And later that night a baby elephant limping and falling behind its mother, putting no weight on its front foot. Our guide said it wouldn't last.

But I did take pictures of the elephant that collapsed next to the bush. Everyone, including myself, was keen to see the local lions feed on the elephant. Why should we be yearning to witness something so gruesome? We wanted to see the raw side of nature for ourselves; we wanted a proximity to reality, beyond the pretty perfectly-posed animals, to see how they stay alive, watch them feasting with the savagery of an apathetic nature.

But in the end, it wasn’t savage at all. The young lions were playing with the trunk like a toy and gnawing on the dense tusk. It was hard to be much more upset about that than watching a domestic cat play with an insect or a dead mouse. 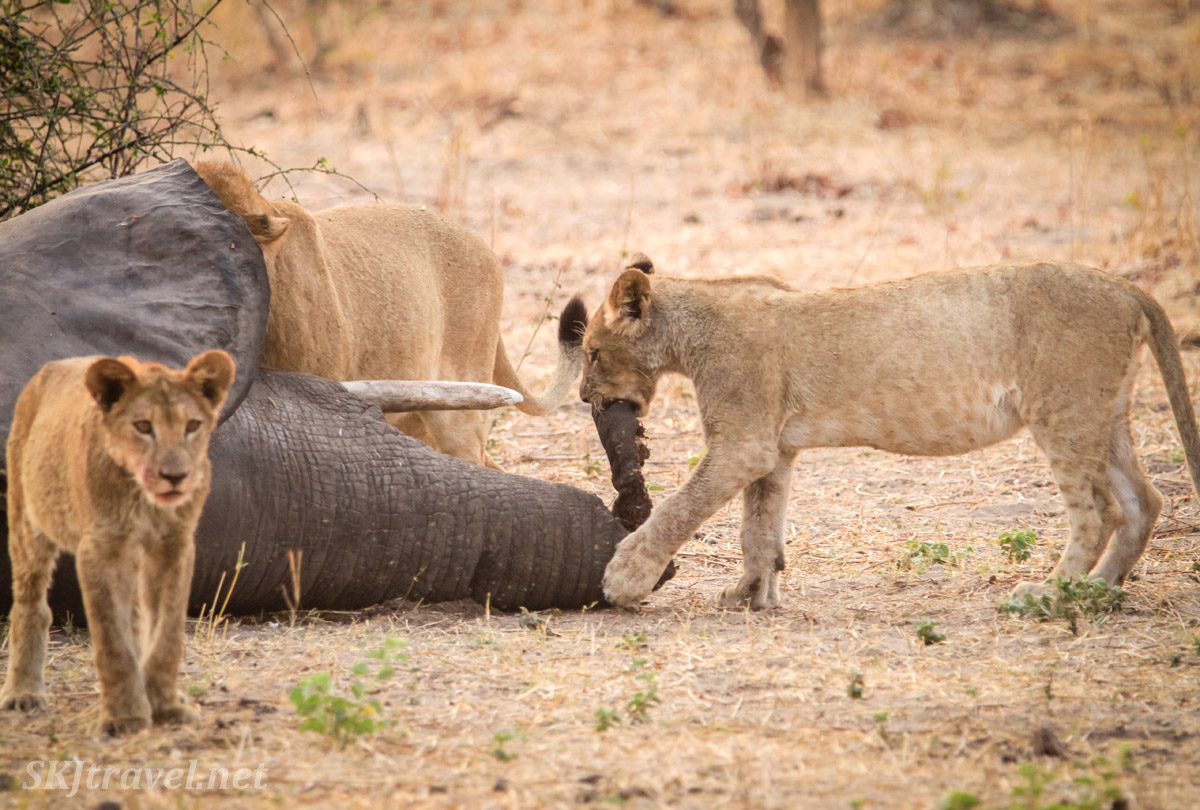 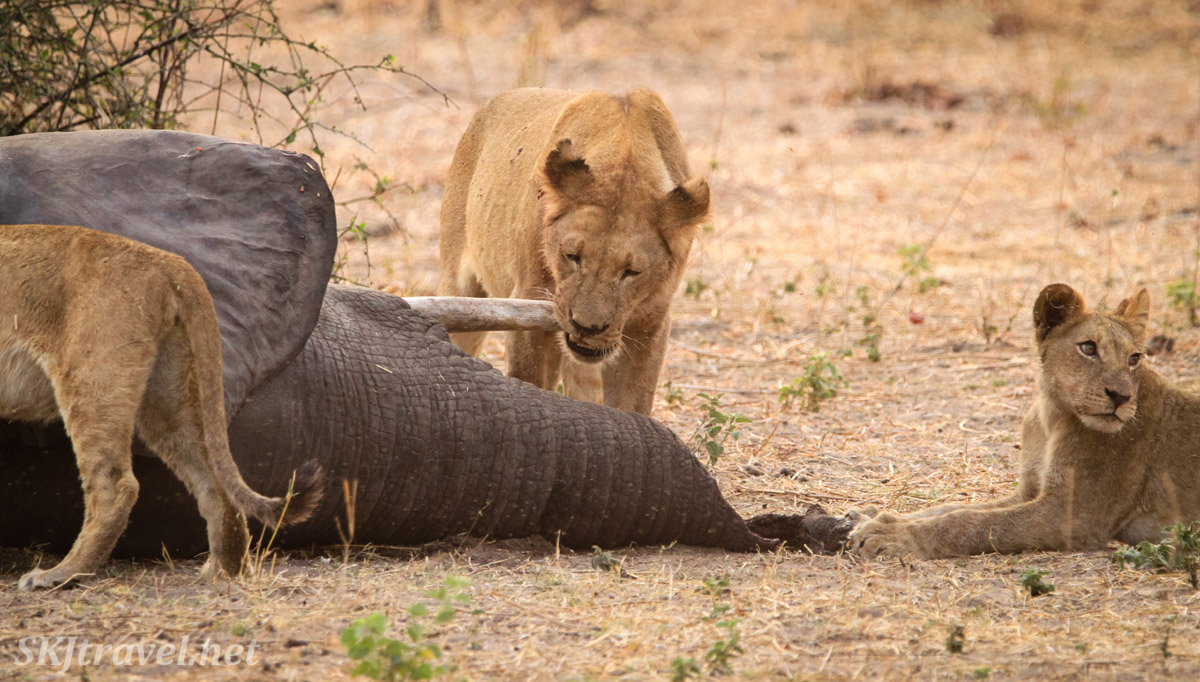 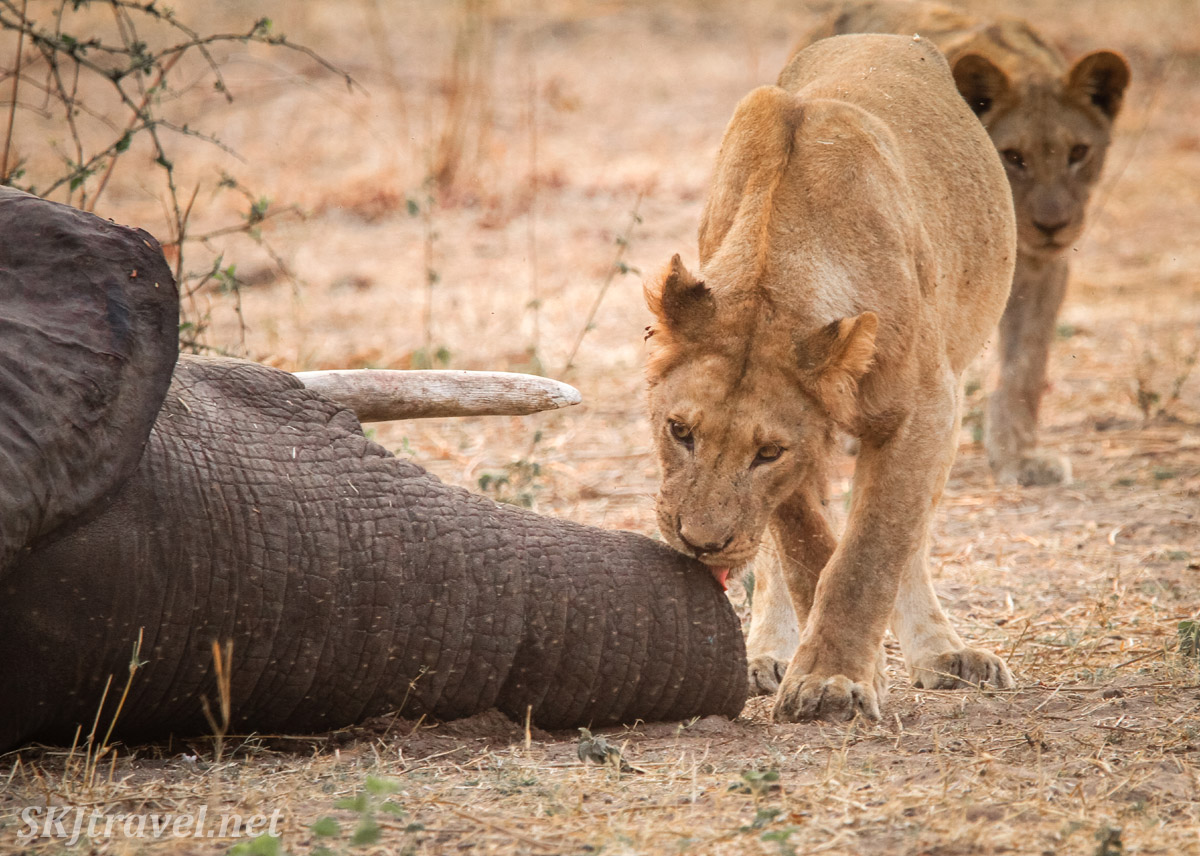 It was fascinating to get a sense of scale for the elephant when a lion’s head would practically disappear inside the hole that had been opened up in its neck. 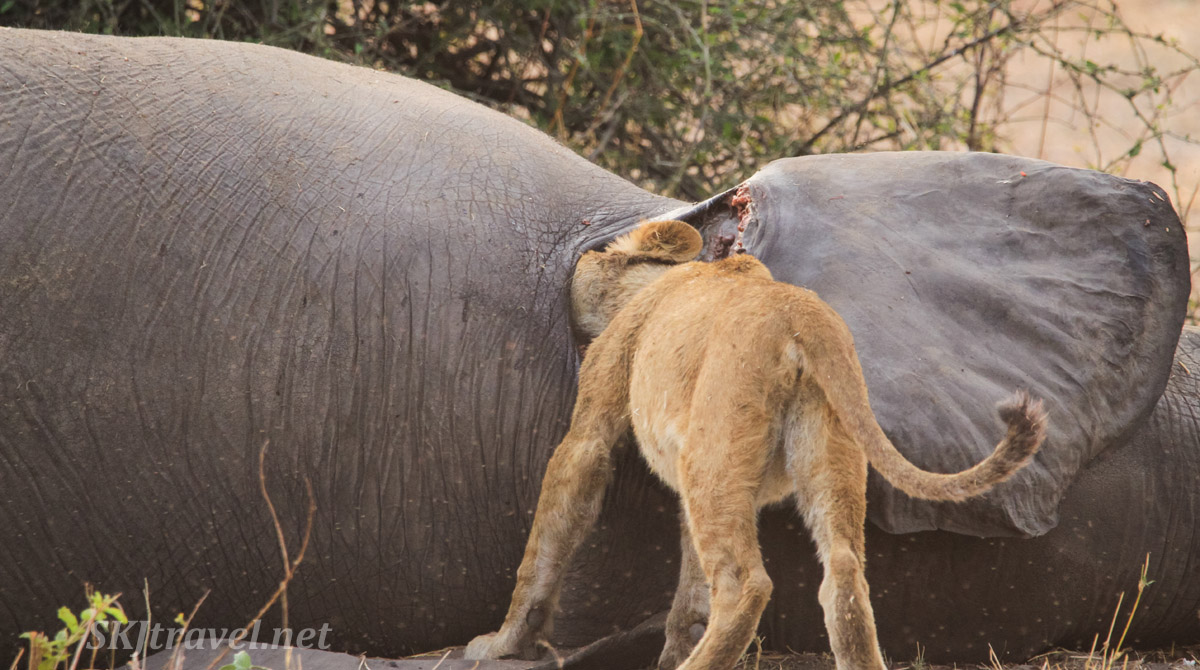 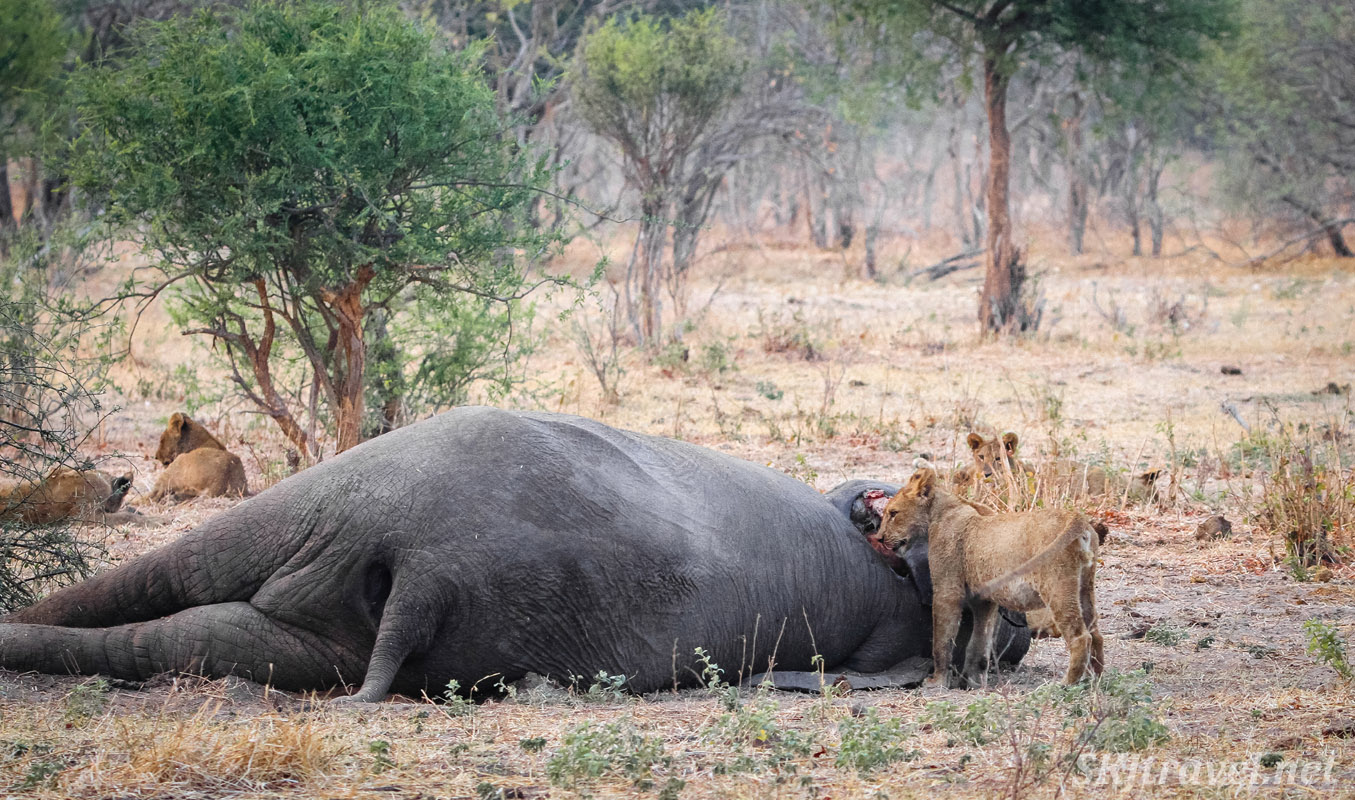 One little cub was bloated into a food coma, his tummy stuffed taut like a balloon. That was downright adorable. He won’t be needing to eat for a few more days! 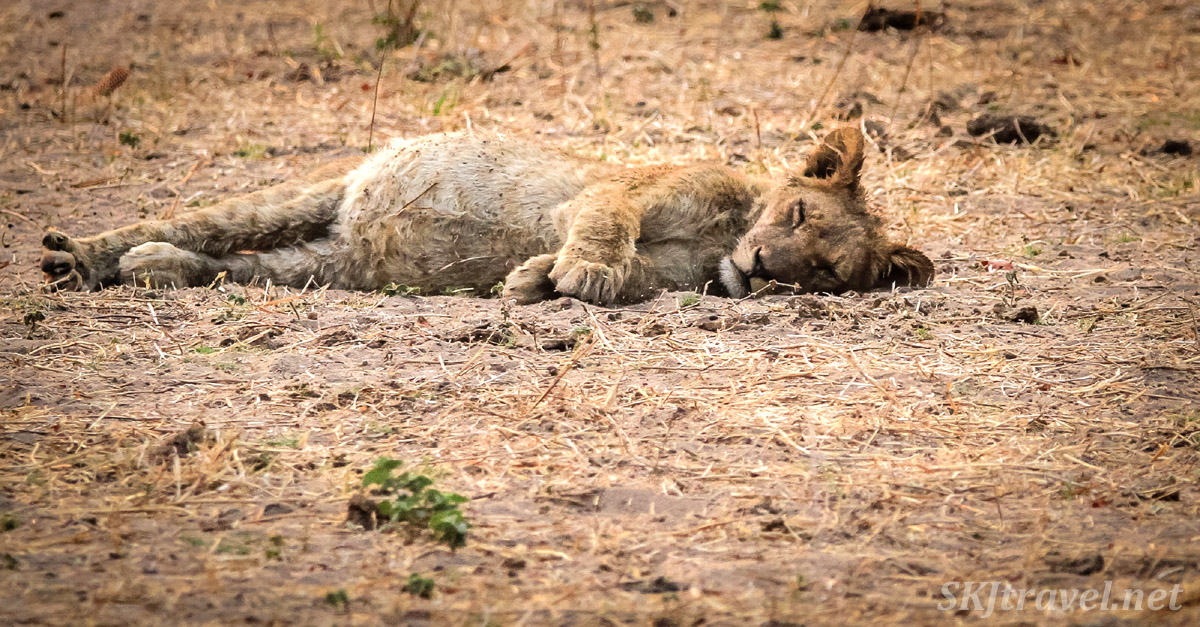 A hopeful black-backed jackal kept his distance from the lions, waiting patiently for them to leave or fall asleep before stepping in to grab a meal for himself. He stood in the distance and eventually curled into a ball and took a nap to pass the time until it was his turn at the feeding trough. 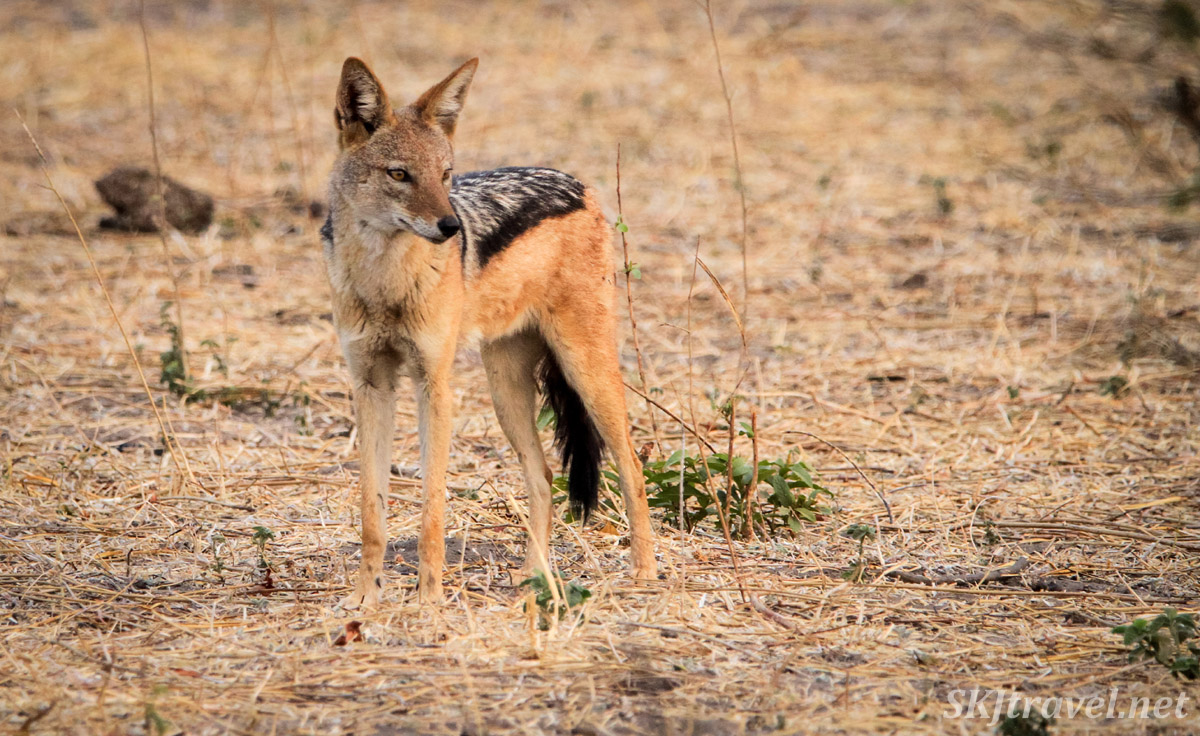 Seeing the dead elephant the night before lying unmolested, untouched, simply collapsed, from heat or thirst perhaps, was profoundly more sad than seeing it torn and burrowed into, lying partially eaten in the sun. To have fallen alone seems more tragic than to be a part in the proverbial circle of life, the epic dramas that result from the struggle of predator against prey. I was glad to see him taken into this circle.

Still, "the dark heart of nature" kept running through my mind. It still does. Is it a dark heart or an apathetic heart that beats in the wilderness? It seems dark because there is life and therefore joy in death, and we would feel like monsters if we saw human death in the same way. But to be left alone in indifference, for such a majestic animal to decompose and disintegrate, to be embraced only by lifeless forces -- wind, rain, sun -- feels more emotionally brutal. Which is weird that a lack of emotion in the universe evokes a stronger emotion in me. So I guess I'd rather there be a dark heart than no heart.

And the young lion cubs live another day. :-) 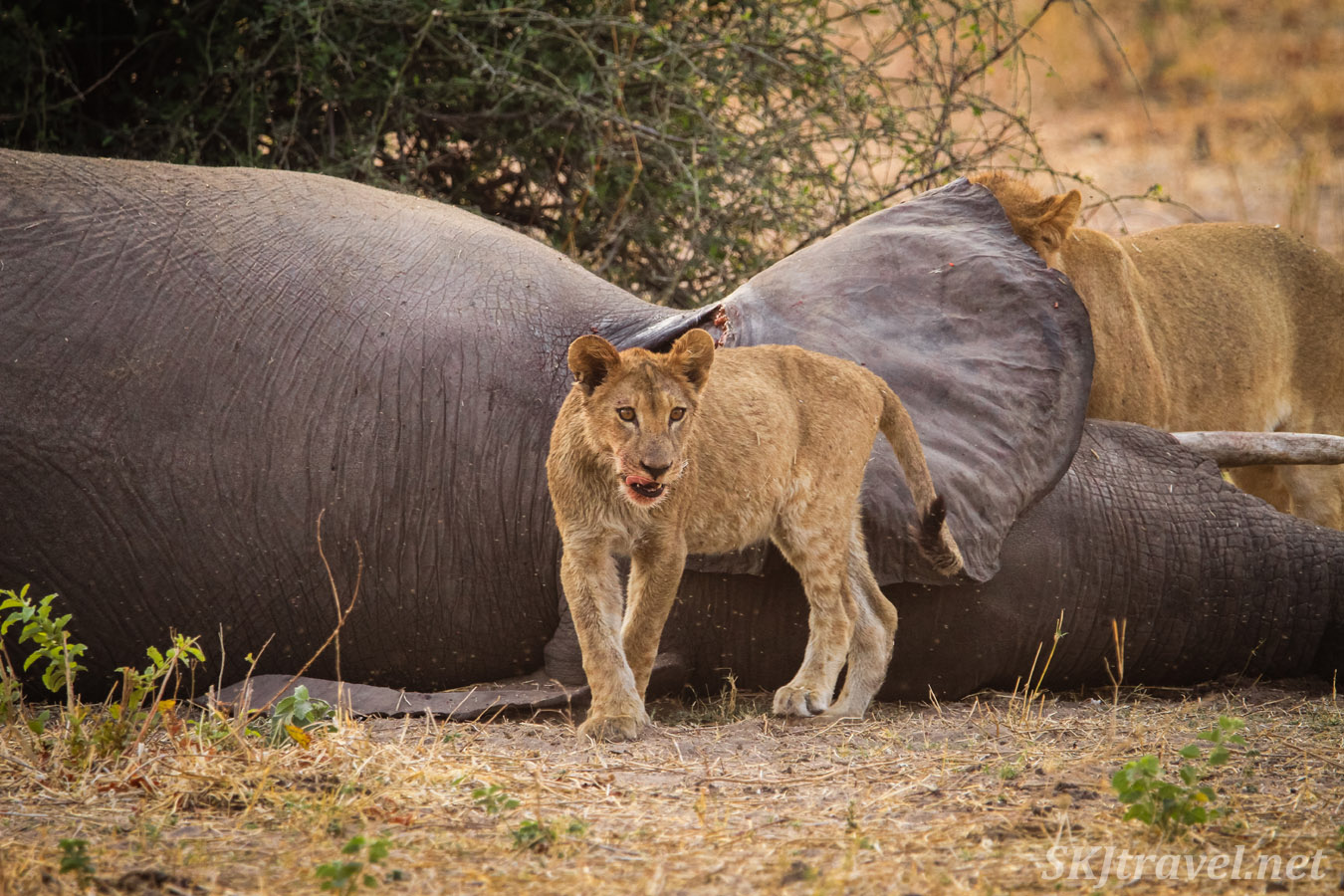