The kids were crowded in so close to me that I could barely move my elbow out far enough to be able to write comfortably.  They incessantly asked questions, but I could not understand most of them, having only a rudimentary knowledge of Portuguese.  They asked me how I got the scar on my knee, and I mimed a motorcycle crash.  They raised the eyebrows above their wide, brown eyes and smiled, seemingly impressed.  They wanted to try on my sunglasses, they wanted to touch my necklaces and my scar and the paper I was writing on.  They pored over the words I wrote with serious faces, looking from the paper to each other, as if collectively they could figure it out.  Light-hearted Pembe tickled the kids and laughed with them, talking to them as if they could understand her Australian-accented English, touching their noses and kissing their cheeks.

I wondered what I was doing, sitting there writing when a whole new world was at my feet, crowding my elbows.  Surely I could write any time.  But I kept scrawling out words, drawing them more and more slowly to stretch out this phantom mission of immediately committing my experiences to paper, as if any time-lag would destroy them.  I was drawing holes while the other volunteers were hugging the kids.  Though I generally work so hard to overcome it, I retreated into my little cave of shyness.  For a time, I was oil and the crowd of adorable children was water -- I sat isolated, a little glob in their pool.

I thought maybe we’d start in immediately on our expedition’s purpose, but Roberto, our project leader, gave us the day to ourselves.  As part of a volunteer research expedition, we were there to try to quantify the effects that television was having on this small, rural village, which was wrenching itself from the grip of traditional values and cultural traditions.  We would interview people with televisions and people without them, then try to discern consistent patterns in the two groups of people and see if we could attribute any differences between them to the owning of a television.

Roberto made it clear to us that first day that he wanted us to experience Pirabas; he wanted us to know the locals, to fit in as best we could.  Understanding any “results” of the interviews would have to stem from understanding the people and the village life.  Two weeks is hardly enough time to gain any meaningful understanding, but we whole-heartedly embraced this directive.  I stumbled at first, that morning on the steps, experiencing only the sensation of my own pen upon my paper.  The last time I’d really tried to live inside a foreign country and culture was 14 years earlier in 1986, when I’d spent my 16th summer in France and lived with a host family.  Since then I’d only been a tourist, looking through windows and over red velvet ropes, imagining people in typeface or flipping through them on the television.  I’m inherently a shy person, and it took me a moment to regain my bearings, and to remember what “experiencing” is all about.

My fellow volunteer, Nanci, was an elementary school art teacher who had received a grant to come on this expedition.  She was Korean by ethnicity, with a gracious smile, and we hit it off from the start.  We were both about 30 and the only two of the crew who were married.  After I put away my notebook, we decided to walk over to the dock just across the road.  We walked to the end of it where a small fishing boat was moored.  A circle of men were crowded on the deck drinking beer.  It made for a fun picture, and Nanci and I asked if we could take it. (p.s. this is in the film days ... these pics are scanned from prints) The men very happily agreed and then invited us onboard the boat.  We glanced at each other briefly, then stepped aboard, where we engaged in a fairly lengthy exchange with one of the men. 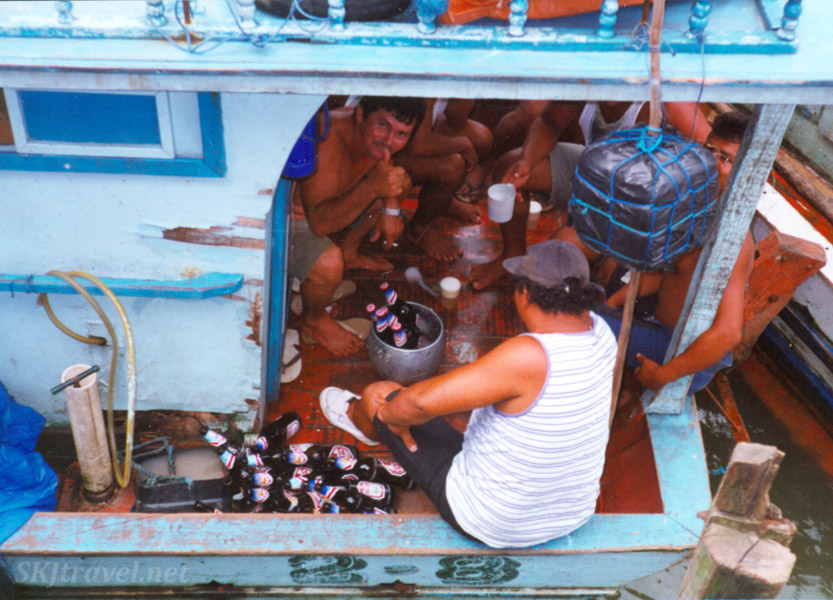 It was a comical exchange, and fortunately at both ends we appreciated the comedy that none of us understood what the other was saying.  The men knew zero of our words, and I could pick out but the smallest fraction of theirs.   Eventually, Nanci and I decided that the men wanted to take us for a ride to a place called Fortaleza which was 20 minutes away.  We accepted rather warily, but as the men unwound the ropes and pushed the boat away from the dock, we shrugged at each other and said, “What the hell!” 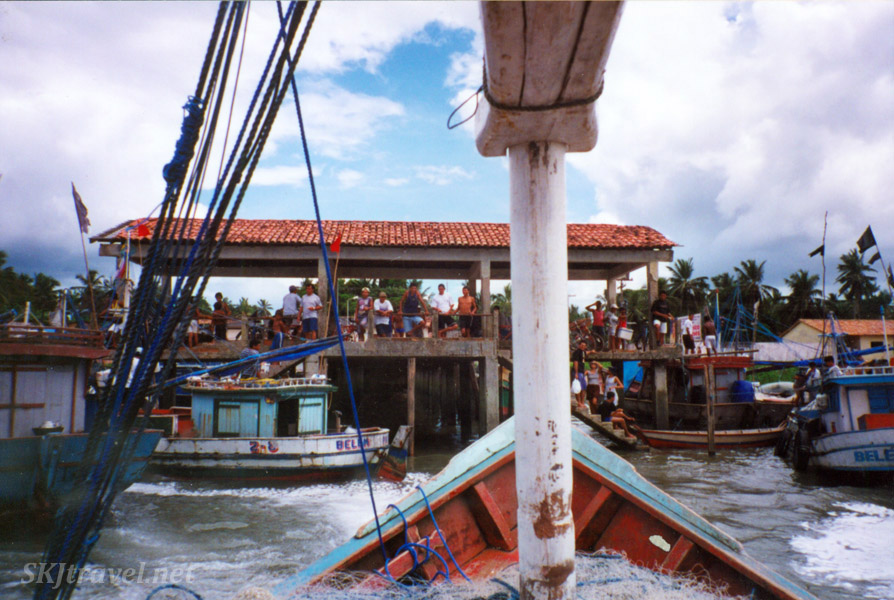 My wariness turned to giddiness as the men rummaged around and found two yellow plastic cups somewhere at the back of the boat.  They were covered with dirty fingerprints and ringed with dried beer in the bottom, but offered to us like fine china.  We took them into our hands and the men poured us some beer.  We raised our cups to their beer bottles and the little boat rang with “Cheers!”  Just then we chugged past our house where the rest of the volunteer crew was assembled on the steps.  Nanci and I waved at them, and they waved back as if they might never see us again. 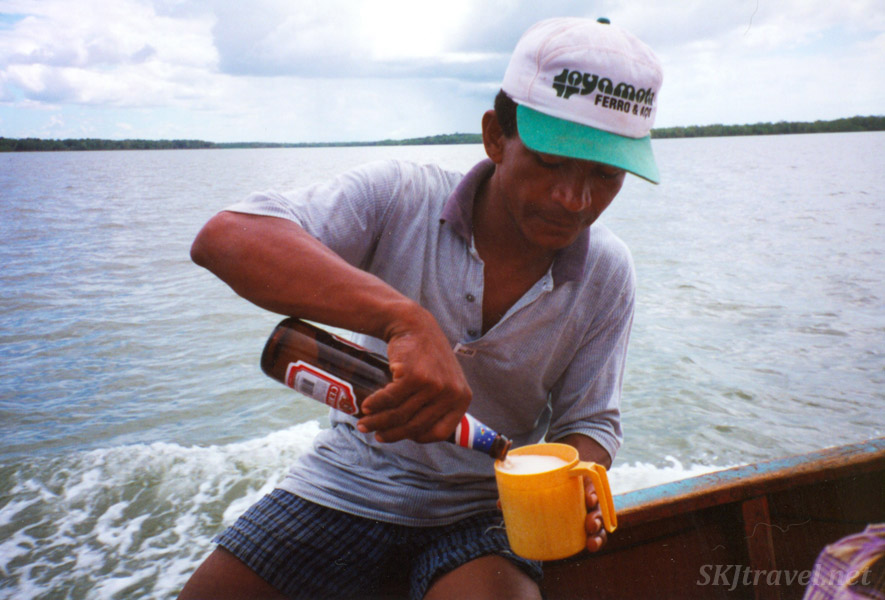 On the boat, we all tried to talk to each other, but in the end fell into fits of giggles at our lack of success.  The owner of the boat was named Iki, and he steered us toward an island down the bay.  I felt exhilarated standing at the front of the boat, chugging through the dark water, the wind blowing back my hair and my cares.  My lips were moist with sea water and beer, framing bubbles of laughter.

At the island, the men helped me and Nanci jump down from the boat deck and then they showed us around the island in their bare feet and long shorts.  We were all pantomiming as our major vehicle of communication and laughing at each other’s efforts.  At one point they asked Nanci her nationality, and she told them she was Korean.  The word must be similar in Portuguese because immediately they all started faking karate moves.

It wasn’t long before Nanci and I each broke out a camera to take some photos of the island. The men crawled over each other to get in front of the lens every time I focused on something.  They kept pointing at things and then to our cameras wanting us to take a picture. I wondered if they thought they would get to see the developed photos.

The men were enthusiastic tour guides, practically manic.  They romped around like little boys, playing with us and each other.  We were only half-way around the island before we were all hanging our arms around each other’s necks as if we were long time buddies and posing for pictures, passing the cameras around so everyone got a chance to snap a shot.  One of the men picked a flower for me and I stuck it behind my ear. 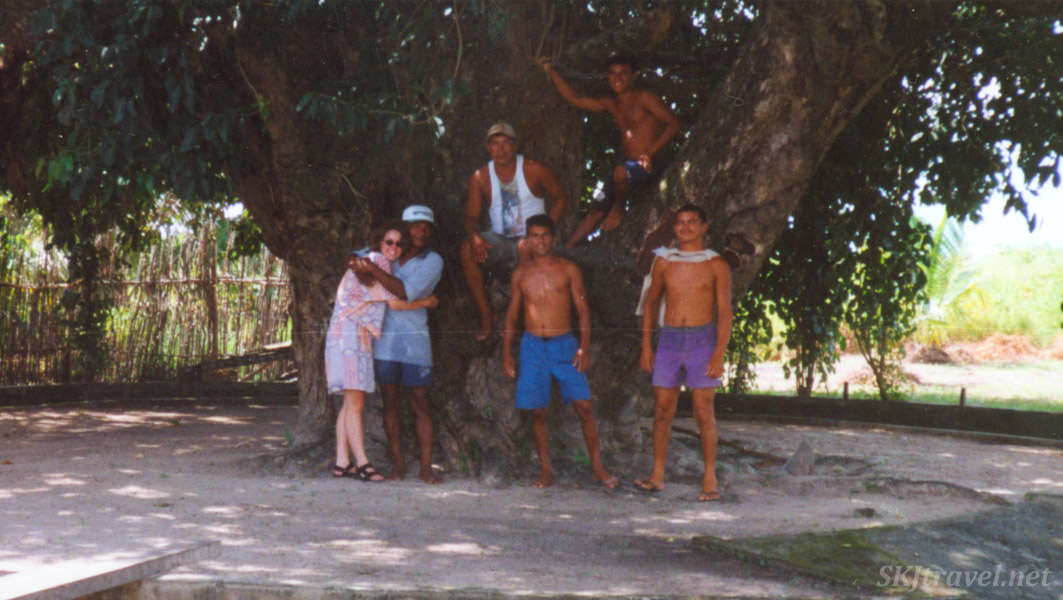 When we got back to the shore to board the boat, a man I called Allen (because I couldn’t remember his real name and he reminded me of a TV-show character named Allen) swept me off my feet and carried me through the water to the boat and lifted me up onboard.  Another man did the same for Nanci.

On the ride back, they asked if I was married, and then if I had children. I showed them my wedding ring and said I had no kids, but that I had a cat.  They didn’t seem to understand, so I started going, “meow, meow, meow,” and they all fell over with laughter. I had studied a little bit of Portuguese in hopes of being able to crudely converse.  In my imagination, though, I was somehow carrying on long, philosophical discussions with the locals.  But I was only slightly disappointed that we weren’t communicating better in light of my Living Language lessons, for it occurred to me that a nice, docile conversation would have been rather more dull than the pantomiming and meowing.

When we came back home to the dock, the four men stayed on the boat.  Everything had changed now as Nanci and I walked back to the house.  I had swung all the way to the other end of the spectrum:  Wow, we were buddies.  We were just six regular people spending an afternoon together like regular people back home, as if there were no real differences between us.  As if I could just move here to Pirabas for good like moving to Ohio.  I strung us all together, Nanci and I at either end, the four Brazilians in the middle, like a Red Rover line.  Send “separate,” "different" or "other" right over, and they might be repelled by our linked arms.  There was this mythological moment as I walked away from the little fishing boat in which we were at the genesis of the world, where Nanci and I were taking shape from the ribs of the Brazilians. We walked up onto the land and I felt a new sense of freedom, but it wasn't the upshot of breaking chains or running wild, but rather, ironically, because of the tether between us all now. Like a kite taken out of its claustrophobic box and flung into the air, not to drift away alone, but let to fly precisely because it has a string to keep it grounded in somebody else's hands. 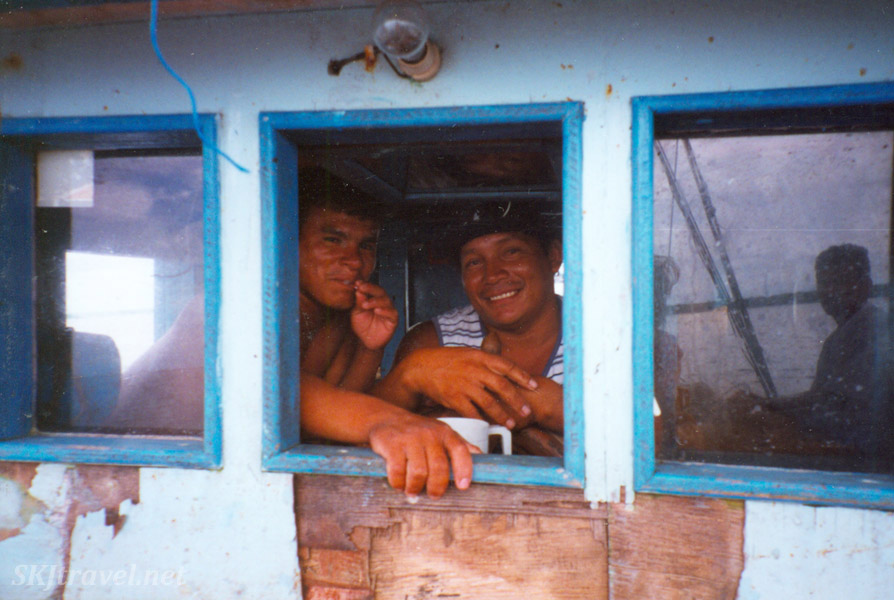 After Nanci and I got back to the house, I sat down on the empty step again to write about our little adventure.  Almost instantaneously, a horde of kids crowded around asking questions.  Several of them had small, crusty lesions on their arms and legs.  This time I said to myself, we should know each other, so I asked them all their names, and they were suddenly very shy.  Their curiosity had been sheltered in their anonymity.  They didn’t want to own up to their curiosity, to name their prodding hands and wide eyes, as if by identifying themselves I could rob them of their abandon.  Like how it’s easier to ask a complete stranger than someone you know a really stupid question that you’re dying to know the answer to.   But one girl, after a moment, happily got up and introduced everyone.  One of the boys wanted to know if I lived on the island Fortaleza.  When I got up a short while later and went in the house for a briefing, the kids all clamored to the glassless window, their little dirty hands smothering the peeling paint of the window sill, to peer in after me, after all the volunteers, as we filed in.

That afternoon was game changer for me. Thereafter, whenever I felt timid in a foreign situation to reach out toward experience, I remembered the afternoon on the fishing boat. The foaming beer, the salt in my face, the flower behind my ear. "Meow meow meow!" I look at the kind of life I've led since then in the world abroad and know I owe a lot of it to that one spontaneous decision: "What the hell!"