The Extremes - From Tropical South Africa to Snowy Lesotho

So we’ve gone from sea level, snorkeling at Kosi Bay, to nearly 10,000 feet high in the Lesotho mountains. From 90 degrees F in Kruger to 30 degrees at Sani Pass.  Hot dry wind to cold blowing snow. Land as flat as a pancake to magnificent cliffs of dragon’s teeth in the Drakensburg mountain range. I guess most areas this large will have a wide diversity of landscapes. But having packed all that into 3 weeks makes the country seem a bit more epic. Then of course the extremes in wealth and poverty. We haven’t really seen much in the way of blatant opulence, but definitely decidedly upscale places, which have more impact when juxtaposed with the shanty towns and rural rondevals.

So we woke up at the top of Sani Pass to cloudy but clearing skies. It hadn’t snowed very much more overnight from what had accumulated when we went to bed. The folks from yesterday had found a ride down. By the time we finished breakfast, the clouds had broken enough to allow us to see down the pass we would be descending, and the snow on the road was melting fast. The proprietor told us about a snowstorm that happened in 2002, when about 30 tourists at the pub/B&B got suddenly and unexpectedly snowed in. The proprietor, meanwhile, was snowed out as he’d gone down the pass to run errands. The tourists were trapped at the B&B for a month! 30 days and nobody could get up or down the pass. Finally, they rescued the trapped people with a helicopter. The only thing the people could find with which to mark out a “pad” for the helicopter to see where to land was a bottle of ketchup. Imagine getting trapped like that! 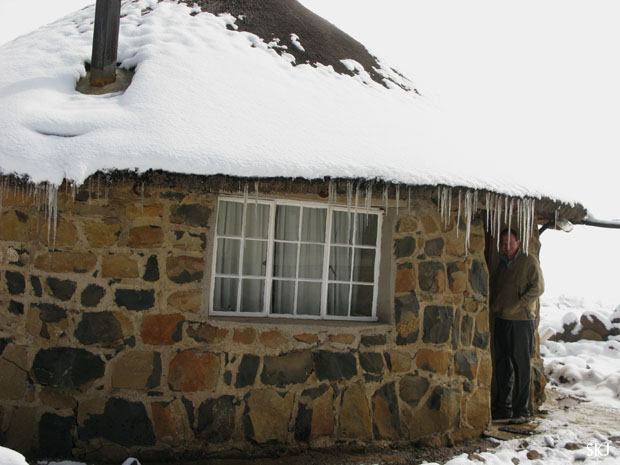 Well, not us. We were able to leave as planned. We left Lesotho through the tiny border post atop the pass and then, it’s a bit odd, but the South Africa border post is all the way at the bottom of the pass. It’s a no man’s land for about 30 minutes of driving. I really adore these tiny border crossings, as both ends of Lesotho and leaving Swaziland. So refreshing when you consider what you have to go through to get into my country ... I love my good ol' USA, but damn, it sure is a hassle to get back in.

The views from the pass were spectacular. They lived up to the reputation the guidebooks gave them. Not much traffic on the pass because you must have a 4x4 vehicle. Most people park their 2wd cars at the bottom of the pass and take a 4x4 shuttle jeep/land-cruiser-type thing up. Apparently, the South Africans all want to come up when there is snow on the pass because it doesn’t really snow in South Africa. Indeed, we passed about 10 land-cruiser shuttles coming up the pass while we went down. One time, a woman in the car going up, who had her window rolled down, said to us, “The snow is melting on your car!” This must be quite a novelty to have snow on your car that is subsequently melting. The road was gloriously twisty and steep. But I think we would not have lived had we tried it yesterday. 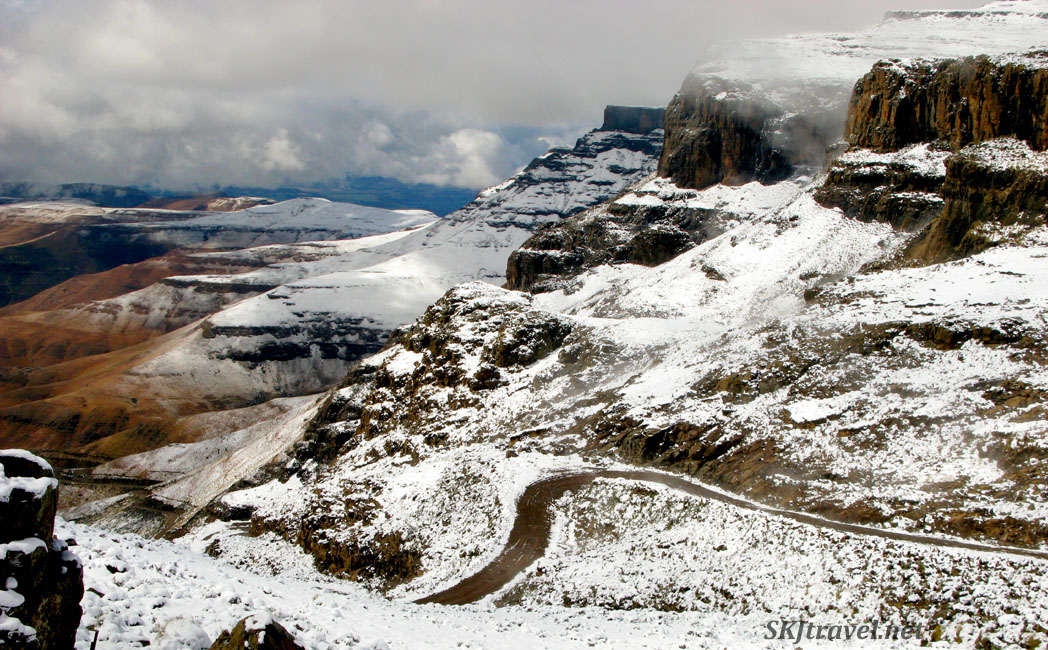 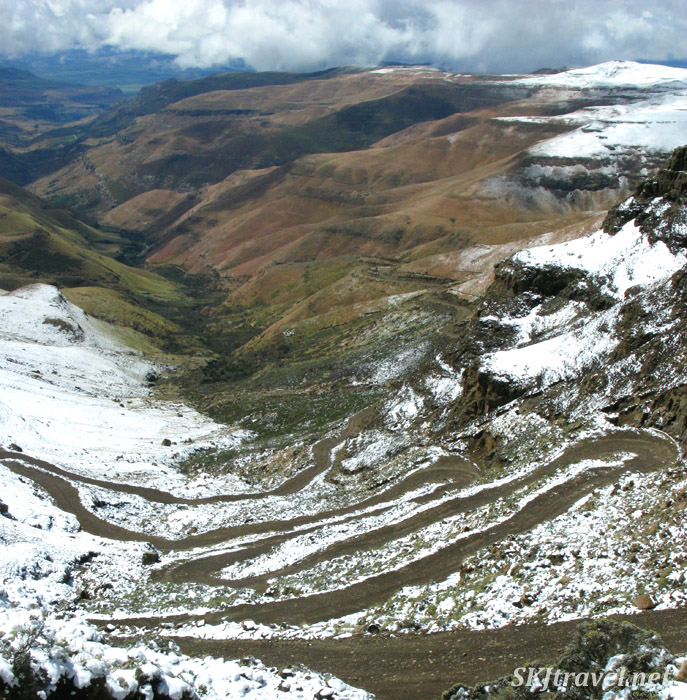 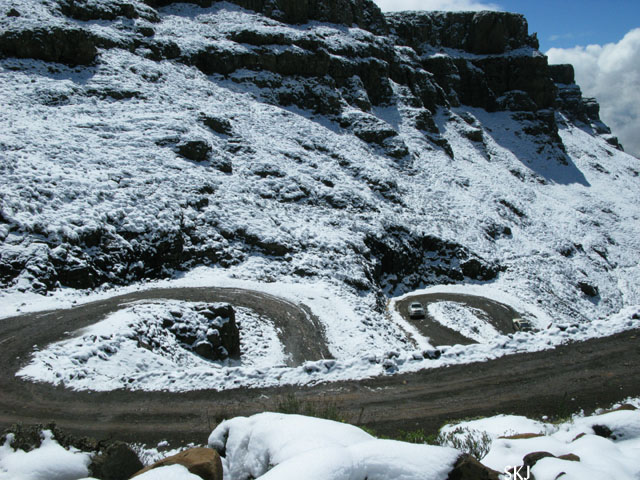 So we drove on to Royal Natal nat’l park. The roads we took there were quite remote, no traffic, few houses, as it is an area where a few people own large ranches/farms.  Our “luck” held and while driving one of these dirt roads, we heard a loud “psshhhht” and our rear tire instantly deflated. The car jack that came with the rental truck was not very well built and while jacking up the car, it broke. A couple cars passed us driven by black people with no acknowledgement of our obvious situation. The first car driven by a white person stopped and offered to help. The next car with a white person stopped and asked if we needed more help.  Not sure if there is anything to be made of this or not.  One thing I kept thinking about in this region of large land-holdings by whites is the situation in Zimbabwe. I think I if were a white ranch owner here I would be a bit nervous wondering if the same thing could happen in South Africa….

Anyway, a man and his daughter stopped to help us; they used their own jack equipment, and somewhat similar to the German guy in Balule, just pretty much took over and changed the tire himself. We offered beers from our cooler, as that’s the only thing we ever have to offer in friendship and thanks, but it was early in the day, not exactly happy hour. So he declined with the phrase we’ve come to hear so often here when people help us, “It’s a pleasure.” And he drove off. We were unable to see the things I had hoped/planned to see today, but it’s OK. We had a beautiful drive anyway. The Drakensburg range is stunning. We stopped at a B&B that was mentioned in our guidebook as having internet access. Since I had some blog posts I wanted to make, as the internet situation has been so dismal here, we shacked up there at “The Tower of Pizza.” Naturally, we had pizza for dinner. You might not think it from the B&B name, but they had lovely little rondevals to stay in. So basically, camping post-El Diablo was a bust. Cost us more money to stay in accommodations, but hey, c’est la vie. We would have been quite miserable in the truck. 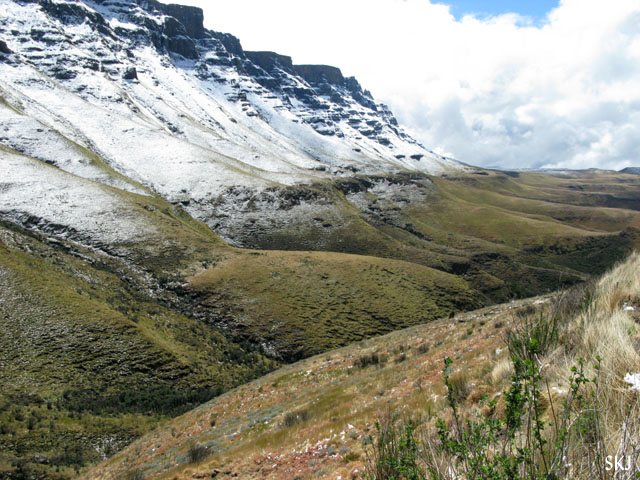 So that brings us to our last day!! Oh dear. Travel time always runs too short by a horrifically long shot. We went for a hike in Royal Natal park. It was great to stretch our legs a bit. It was a beautiful hike. The tops of the mountain spires were covered by low clouds, so we could only guess at their heights. We followed a river valley and eventually walked right along the river, which was as crystal clear as anything could be. The trail wasn’t a loop, so we had to retrace our steps out, but it might as well have been a loop, for the outbound trail seemed quite different; the sun had come out and the clouds lifted from a lot of the mountain tops. We were quite surprised to see just exactly how tall the sheer cliffs were. Really spectacular. Couldn’t ask for a better day to end the trip on.

Now we’re in Durban, checked into our B&B and only now finally trying the South African liquor, amarula. The retired folks on the train told us we must try it, so at last we have. Tasty. Maybe duty free will have some…. :-)

In our frequent encounters with hospitable folks, we were given the phrase, “it’s the African experience.” By now I presume this means something along the lines that things break down frequently, don’t go quite right, but others will help you out and you’ll be alright in the end.

Posting now from an internet cafe in Durban while Erik unloads the truck.  Then we plan to seek out some more bunny chow – the signature Indian dish of South Africa. Apparently, the largest concentration of Indians outside India reside here in Durban. Or so they tell us. But then they've told me so many things ... this is the last hill; their parents are dead and they’d like to go to school; there are no lions in the park.