The Foreigners Are Washing Their Hands!

This is an episode from my time documenting the Chinese village of Dang Jia Shan. I was introduced to the village through an Earthwatch ethnographic project and returned to the village independent of Earthwatch the subsequent year. Dang Anrong, the only university-educated person from Dang Jia Shan village, was our leader and liaison. This is a humorous experience from my first year there, with the other Earthwatch volunteers.

The village directors of ten local villages meet each summer to plan the annual rain festival, which takes place in the town of Wang Jiabian. Perhaps in days past the festival was a little more meaty; the idea that there was a supernatural presence was perhaps more prevalent, and more attention may have been paid to the task of summoning the ear and the favor of the deities.  Though our first-year team attended the local rain festival, I can’t say that I truly know what it is like.  That year neither the rain god nor the entertainment of the performers was the focus of the festival.  Rather, we foreigners were.  We were the first Western foreigners ever to come to this festival, and the first white people most of the attendees had ever seen.

On the one hand, it was pretty hilarious to be a “first” in this part of the world.  And admittedly, it was fun being a local celebrity.  On the other hand, it was a little disappointing to find myself supplanting tradition, to find the festival so secular and malleable that it could turn its full attention for the afternoon to us, when we wished only to be observers.  But particularly that first year, we could never be observers anywhere we went without being equally observed.

We came to Wang Jiabian township for the festival on our way back from a field trip to Jiaxian City.  Having graciously extended an invitation to us to attend the festival, the committee had planned that they would serve us lunch first before the parade to the temple started.  We were running a little late coming from Jiaxian, so the entire schedule of the festival was delayed on our behalf.  Our group was divided between two vans; mine came into town first and drove beneath a stone arch into a large courtyard where many people milled about. As we opened the car door and six of us stepped out, the town officials hurried to meet us.  Immediately, the people in the courtyard began to converge on us.

Along one side of the courtyard was a cement building with the town's government offices, which were on the second floor.  Below them, outside on the raised sidewalk, we were escorted to three slim black metal stands on which three sparkling new ceramic wash basins were placed, filled with fresh, cool water.  There was a brand new bar of soap beside each basin and a crisp hand towel on a little rack that was part of the metal stand.  The basins, stands, soap and towels had all been bought especially for us, as the officials had heard that foreigners like to wash their hands. In such a dry and poor region as this, anyone using precious water and expensive soap to wash their hands before a meal would be considered eccentric to say the least.  The washing “stations” were set up so that it was eerily ritualistic, stepping up to the basins three people at a time, and standing there washing our hands while throngs of people gathered to watch us do so.  I could see them throughout my periphery as I stood at the basin.  Despite the strange, almost ridiculous nature of the event, I must admit the cool, fresh water felt delicious on my dusty, foreign hands.

I replaced my little towel on the rack and stepped aside for another volunteer to access the basin. While I and the first washers waited for the others, we really didn't know what to do while everyone was staring at us. Mercifully, we were soon escorted upstairs by one of the officials to wait for the other minivan to arrive.  He bade us sit inside his office and eat from a plate of pumpkin seeds he placed on the coffee table.  How pleased my palate was to discover that year that pumpkin seeds were a common expression of hospitality!  Totally yummy.

After a time, I stepped onto the balcony and witnessed the arrival of the rest of the team in the next van.  They were a good twenty minutes behind us because one of the volunteers had become car sick and they had to stop several times for her to get out and wretch.  By the time they stepped up to the wash basins, the crowd had doubled in size and pressed significantly closer to the other volunteers while they performed the ritual.  The townspeople were craning over each other’s shoulders to get a good view of the foreigners washing their hands.  Some of them peered with such intensity, I couldn’t fathom what they were thinking.  But I’m certain that if a group of kangaroos or talking snow monkeys were standing there cleaning themselves, the audience could not have been more rapt, and perhaps they would have been thinking the exact same thoughts, whatever they were. 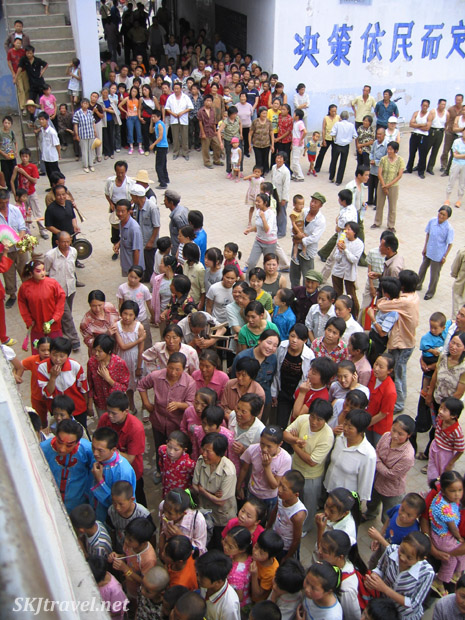 After everyone was washed up, we were led into a little room on the ground level which had been set up with tables and chairs, and bowls of noodles in hot broth were brought in to us.  After a few minutes one of the officials came in nervously, asking if everything was OK.  The town and the festival organizers were beside themselves with the extent of their hospitality, bending over backward and sideways and every direction in between for us, and they were clearly filled with anxiety ...

Was everything to our liking? "Yes, yes! Everything is wonderful!"

What about the food? Is the food good?  “Yes, it’s ..." and right then our sick volunteer leaned over to the side of the table and threw up.  "... delicious."

Because she was sitting at the very back of the room, and Anrong had somehow scrounged up a little paper bag for her to expel into, the official didn’t actually witness the barfing.  Perhaps only slightly less worrisome to him, though, was the fact that everyone else at the table was literally shaking. He couldn't have known the shakes were the effort of restraining laughter at the poignant timing of the barf ... as if it was right from the script of a comedy film. After the official stepped out to prepare for the upcoming parade, Anrong took the little paper bag, neatly folded over the top and carried it out of the room.

Some more photos from the rain festival:

After our lunch, the parade began. The troupe of performers who would soon take the stage to entertain the festival-goers with a long Peking opera and a group of local musicians came down the street. Dressed in vibrant colors, the traveling performance troupe came dancing down the street waving fans and twirling umbrellas. 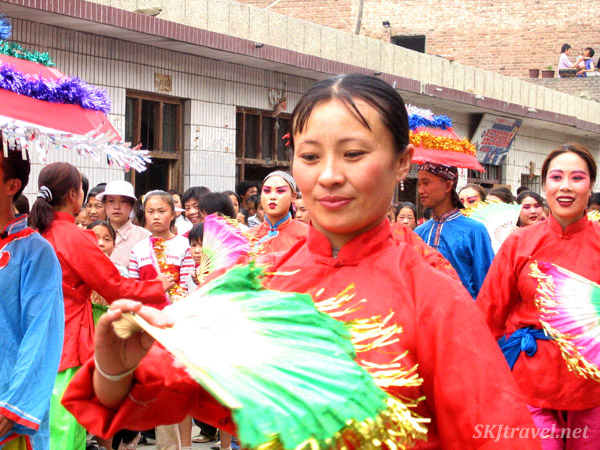 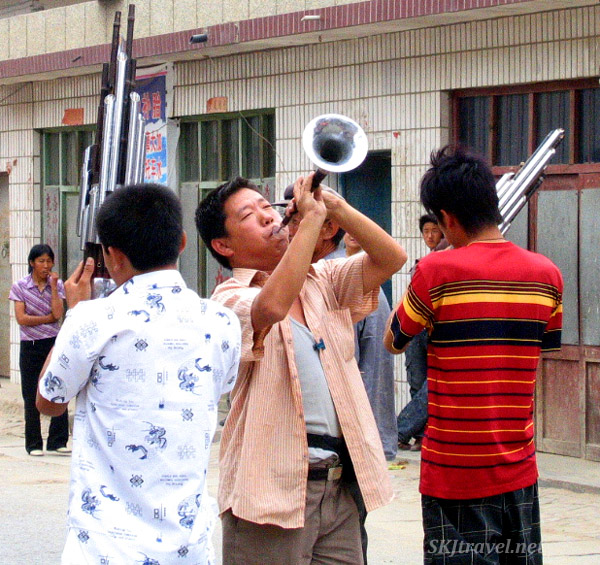 We visited the small temple where offerings were laid out in front of a Buddha and local deities. But it wasn't a simple task getting there, as once again the crowds pressed against us, and finally one of the officials used a bullhorn to tell everyone to clear a path for us. (it's one of our members taking a photo) 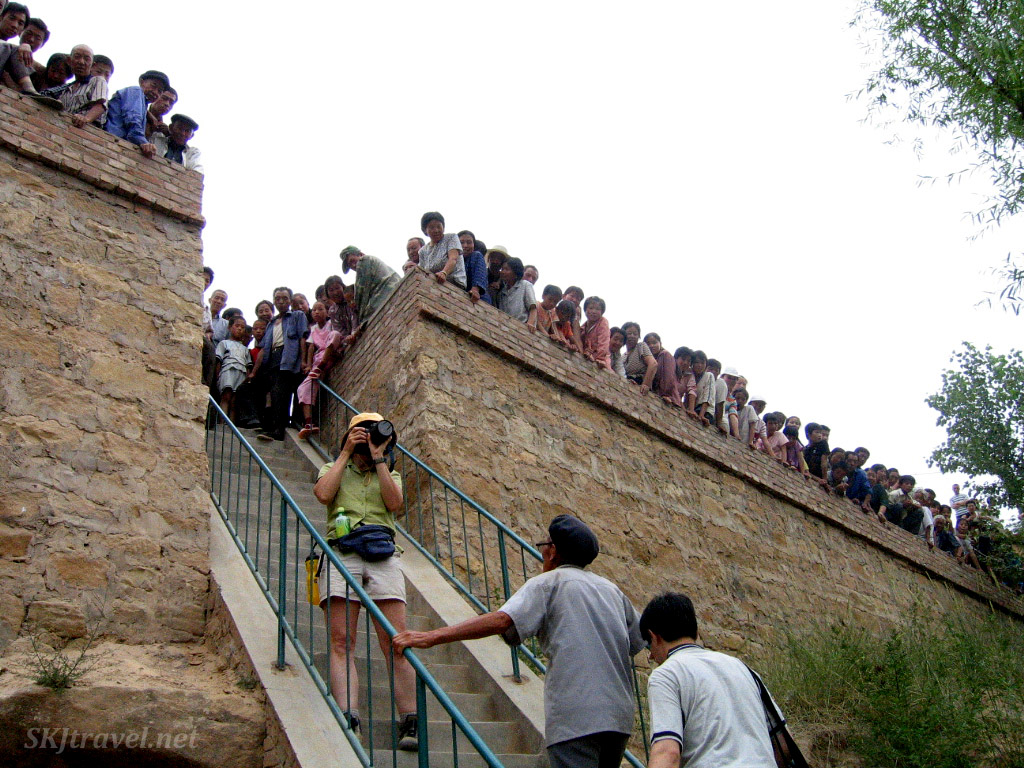 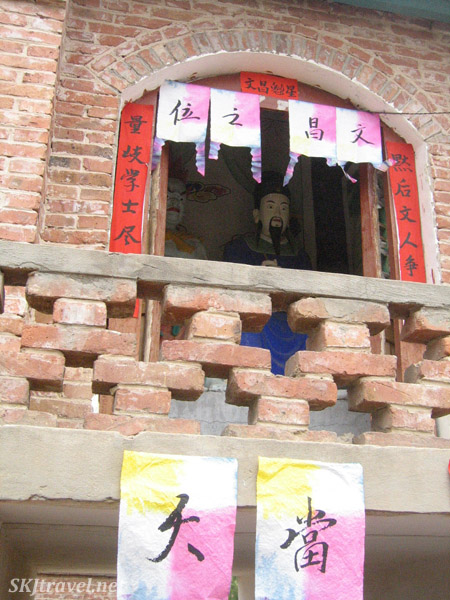 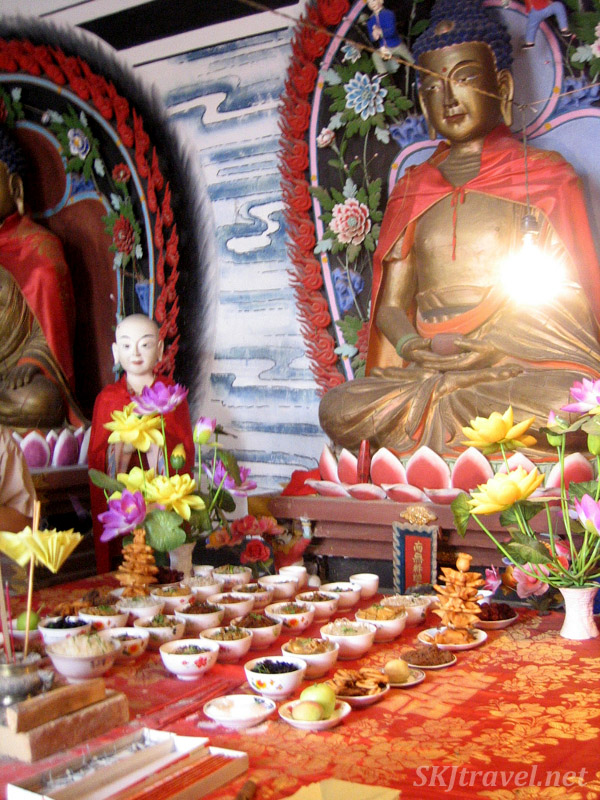 Then we were led through the throngs to another room to wait for the performance to begin, where we were also given bottles of sweet tea to drink. During this time, people began poking holes through the rice paper windows to get a look at us. When we entered the room, the paper was fully in tact. The holes were made while we drank our tea. I felt really bad for the officials who would have to pay to replace that rice paper. 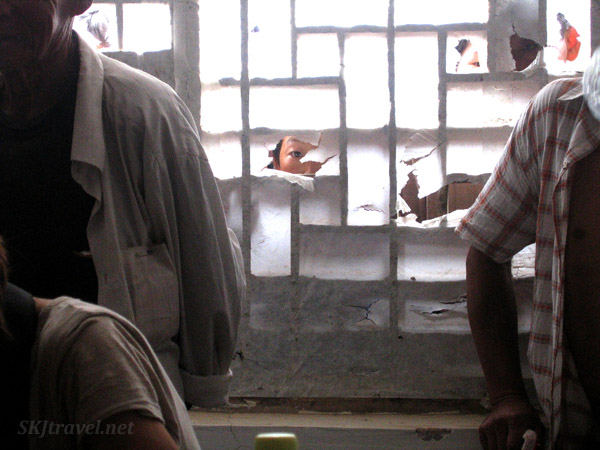 The performers on stage singing and entertaining the audience with tricks. A little section near the front had been roped off for us with little stools topped with carpets. Everyone else sat on the ground. Once again, we felt awkward at our elevated treatment, but what can you do except feel special and grateful for such a unique experience! 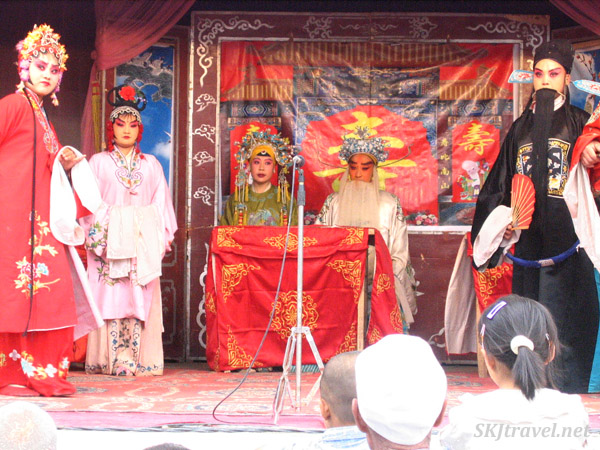 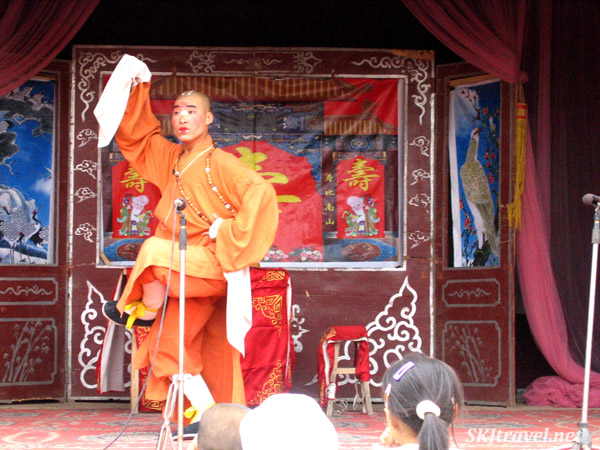