Here is a little photo tour of one of my favorite local haunts. I live in the middle of what was once a large network of gold and silver mines in the Colorado Rocky Mountains. Every mountain town near me, including my own (Nederland), was founded as a mining community, centered either on a mine or a processing mill. There were large mines as well as individuals mining their own small claims. The last house I owned in Nederland, every year debris from the 1800s would surface in my driveway as rain and snow washed away dirt from the cut. I once learned how to date old tin cans and glass, so I could identify most of the artifacts in my driveway to the late 1800s and early 1900s. Old cabins and mills lie in melancholy dilapidation everywhere, deteriorating more each year. By now, most of the mine shafts in the area have been capped or covered with metal grates, but when I first moved to Nederland over 20 years ago, you could still walk into some of them.

One mine very close to me is the Blue Bird silver mine, which now lies inside the Caribou Ranch Open Space, managed by the Boulder County Parks and Open Space. Happily, the Parks department took the effort to stabilize several of the buildings at the old mine and also some old ranch buildings in the valley. Walking to them is both very scenic and super-duper easy. Why so easy? Well, besides the fact they lie in a broad valley rather than over hill and dale, the trail also largely follows an old railroad grade.

Back around the turn of the 20th century, Colorado enjoyed a reputation as the "Switzerland of America." Capitalizing on this, an extensive narrow-gauge railroad system was constructed to choo-choo tourists through our lovely mountains. It was an important improvement to the residents as well, providing a much easier and faster way to transport goods and supplies to and from mining towns than treacherous wagon roads through the mountains. The route was known as the Switzerland Trail. Well, it still is called that, but the tracks have all been torn up and the grades are now either 4x4 roads or hiking / mountain biking / horse riding trails.

Most of the photos I've taken of this space are in autumn (this collection is from several different years) when the aspen leaves are turning color. The area is closed February through June because the large valley is an elk calving area. So allow me lead you down a portion of the Switzerland Trail ..... 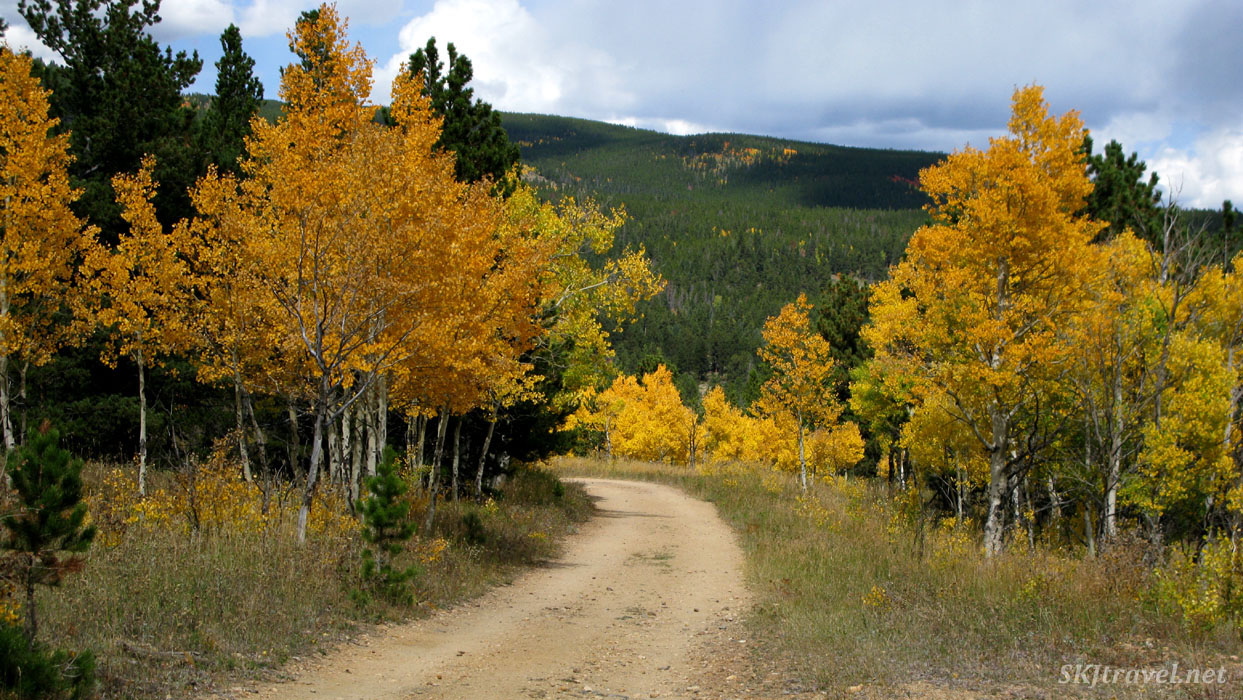 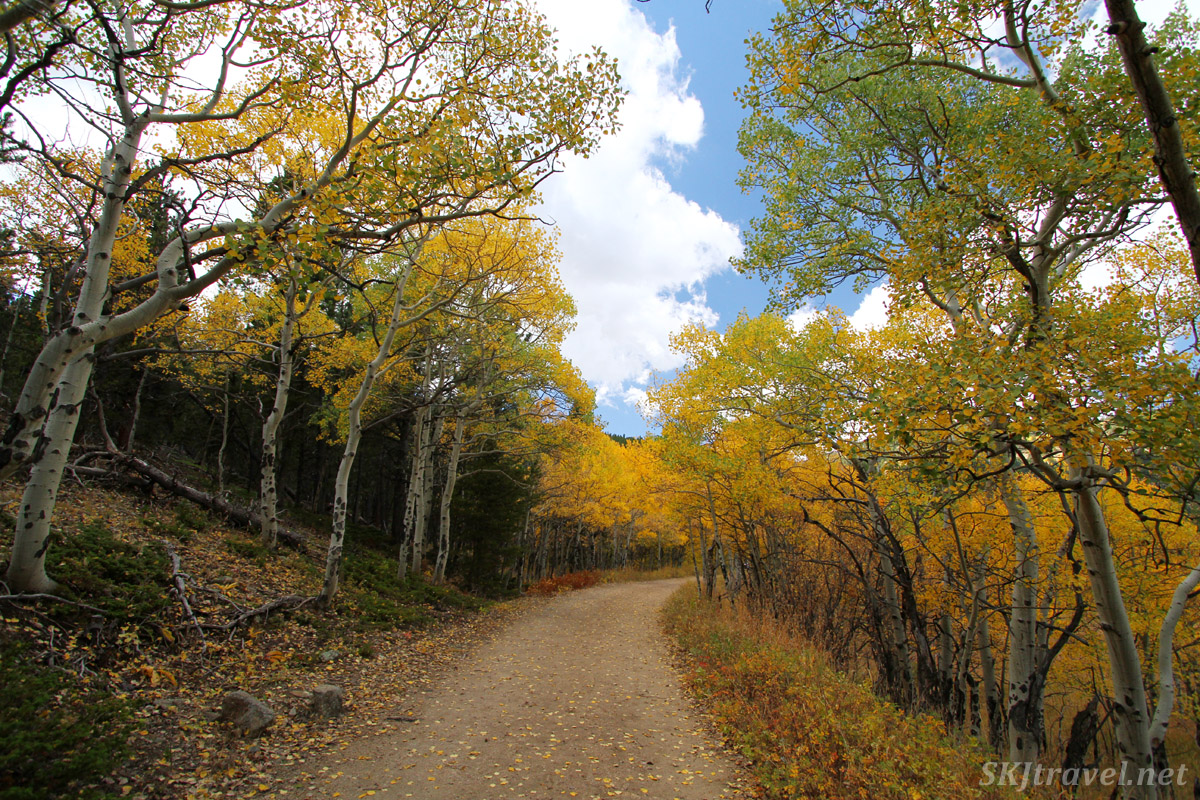 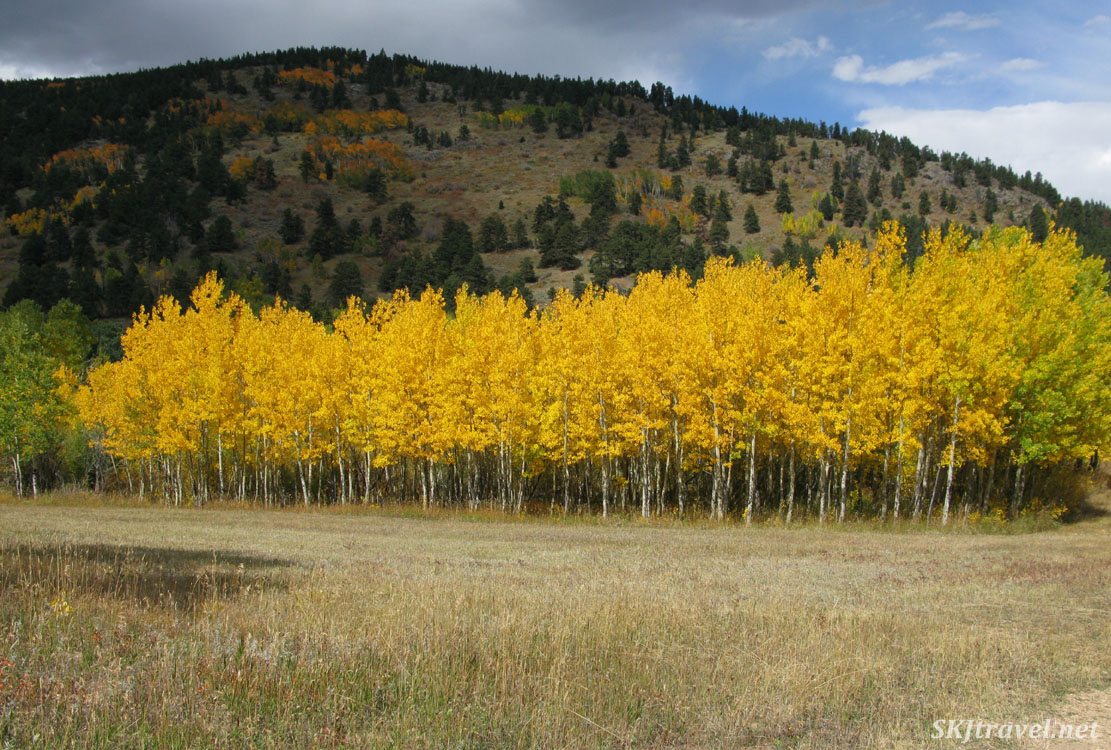 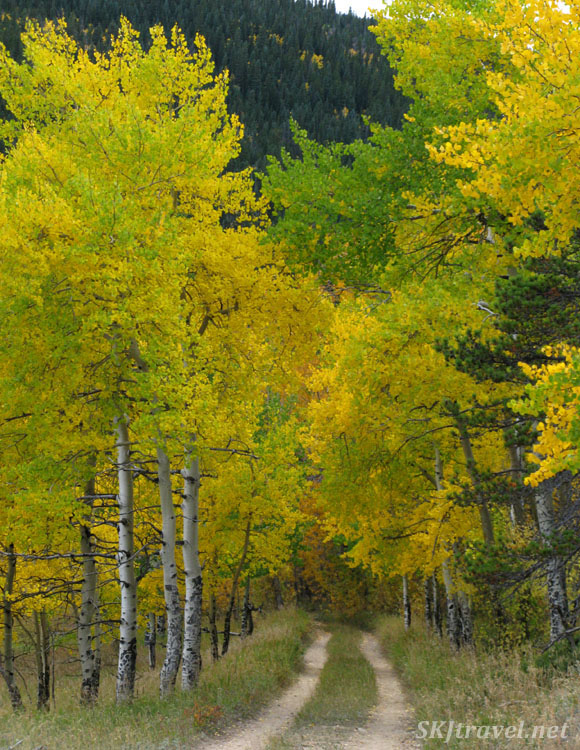 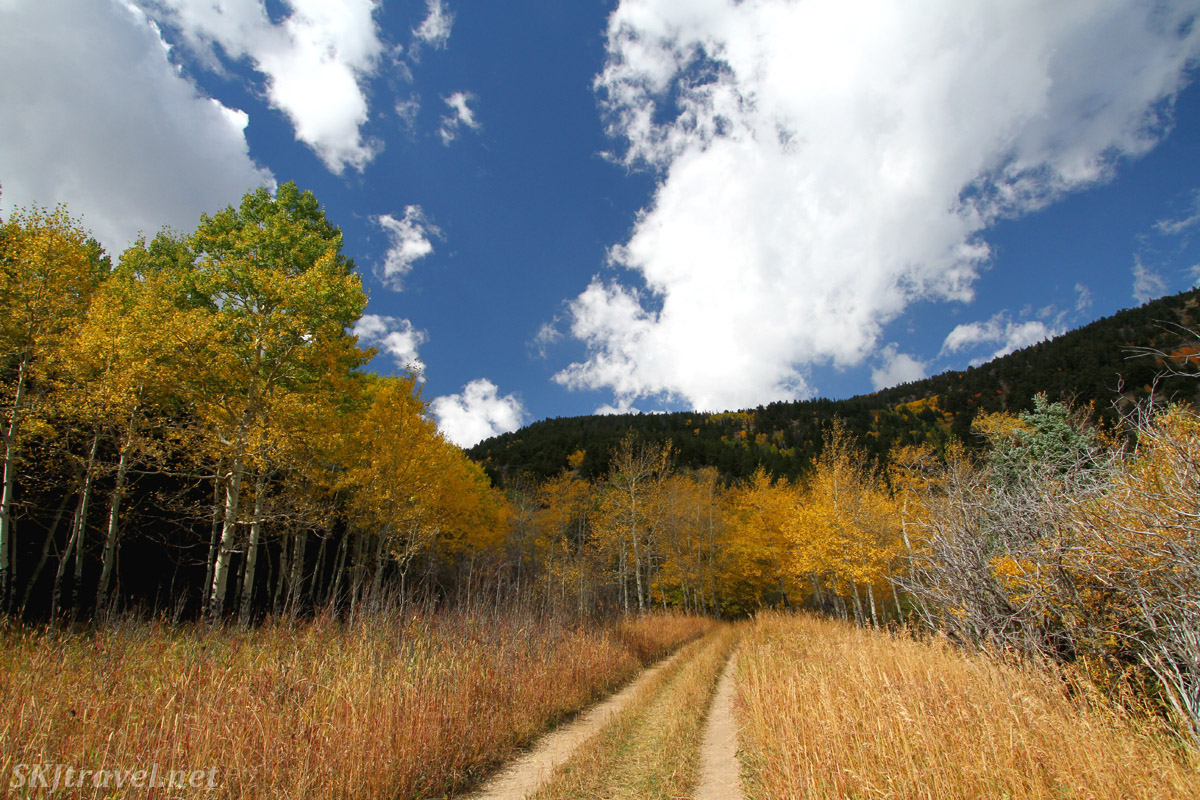 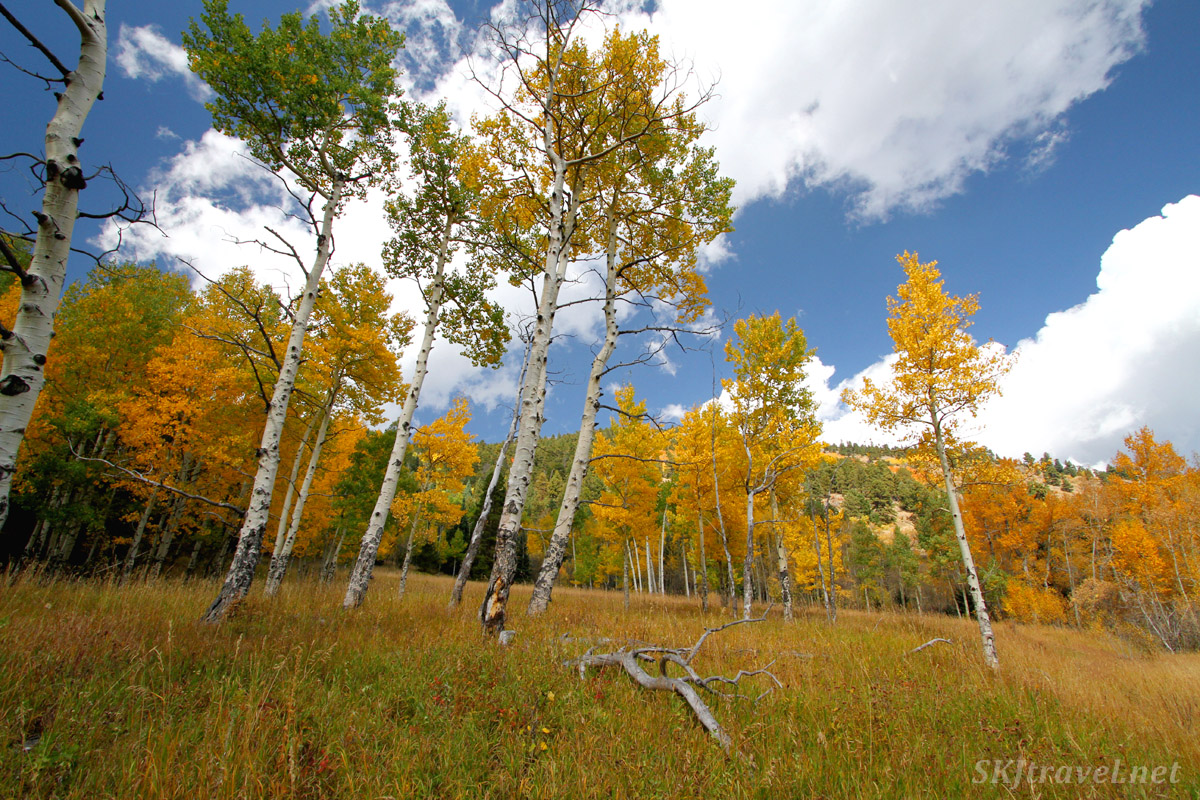 This year I found lots of aspen leaves on the ground sprinkled with dew. I'm really partial to leaves and flowers with water and dew droplets on them. 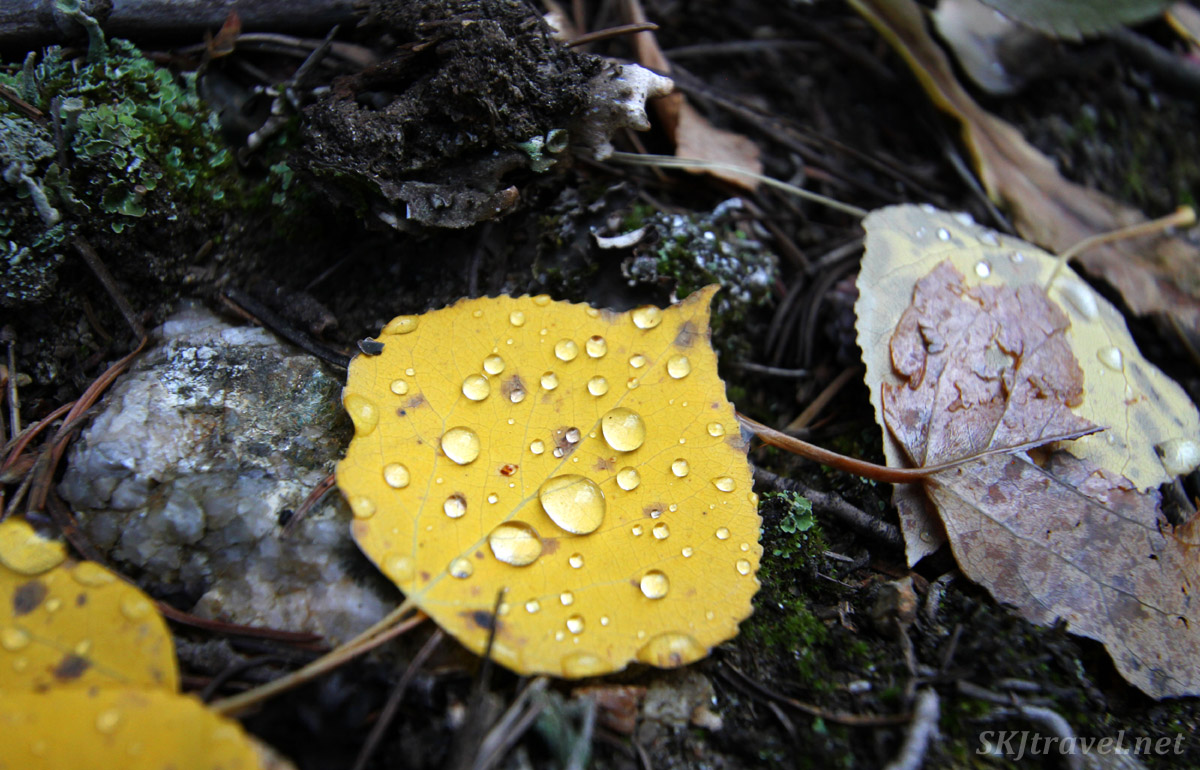 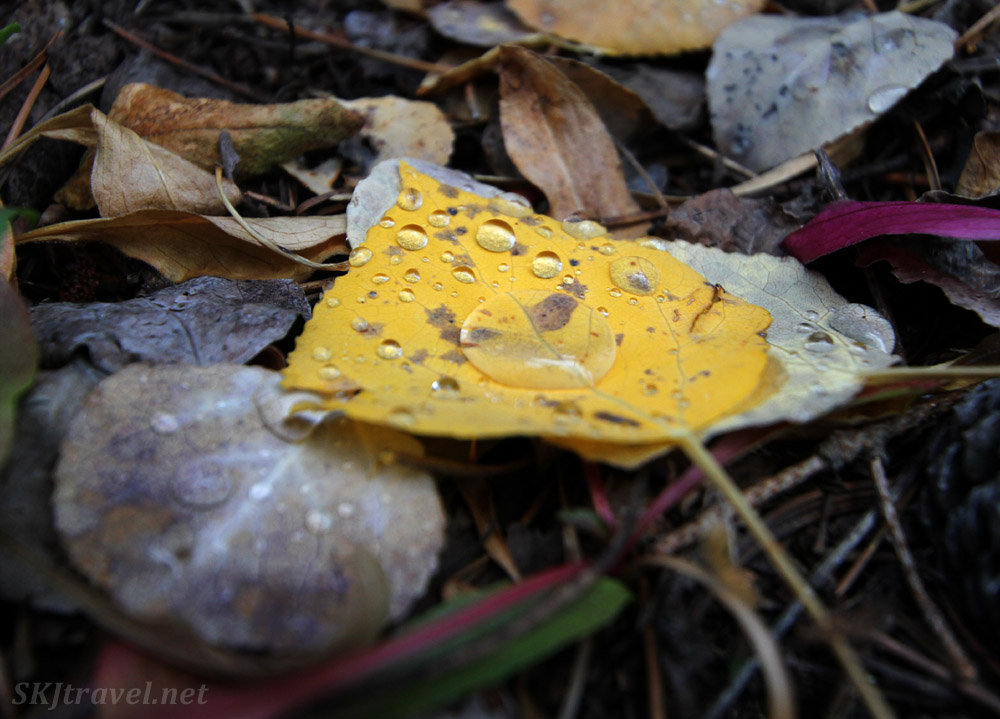 And here's one shot I got in early summer of the trail ... this section is rife with daisies in summer -- from afar, it looks like a field of snow, then magically resolves into hundreds of individual daisies. Not an awesome picture, but you get the basic idea. 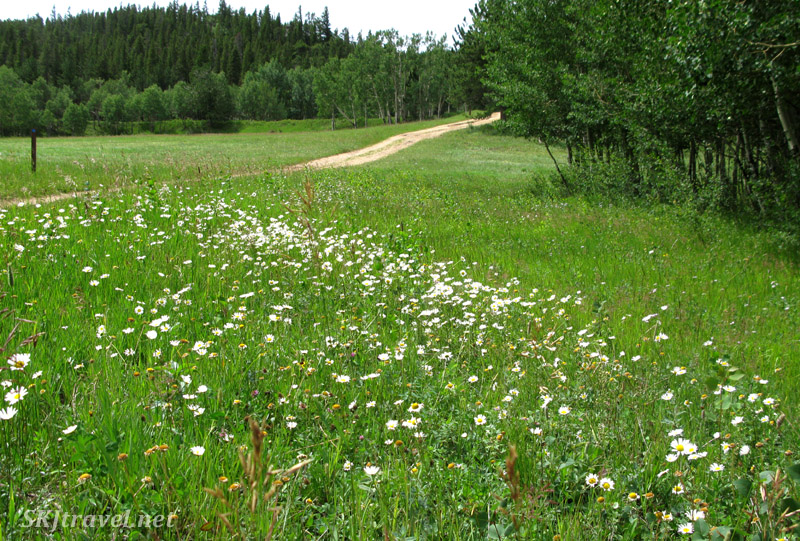 Along the way to the Blue Bird mine, you pass the wide valley (where the elk calve). In it is the historic DeLonde homestead. The DeLondes first moved here, as nearly everyone did, to be involved with mining, but eventually became ranchers, and they sold the land to another ranching family who raised Arabian horses. The next sale was to a Mr. Guercio who was in the record business, and beyond view, in an area restricted from the public, is the old Caribou Ranch recording studio where the likes of Elton John, Joe Walsh, Chicago, Steven Stills, Waylon Jennings and many, many others recorded albums -- even John Lennon came here to record a song with Elton John ... kind of a random tidbit about tiny little Nederland that we had so many famous people stay here and make an album in the middle of the Rocky Mountains. The first house I owned in Nederland was apparently partied in on occasion by Mr. Steven Stills. Check out this brief video about the recording studio. 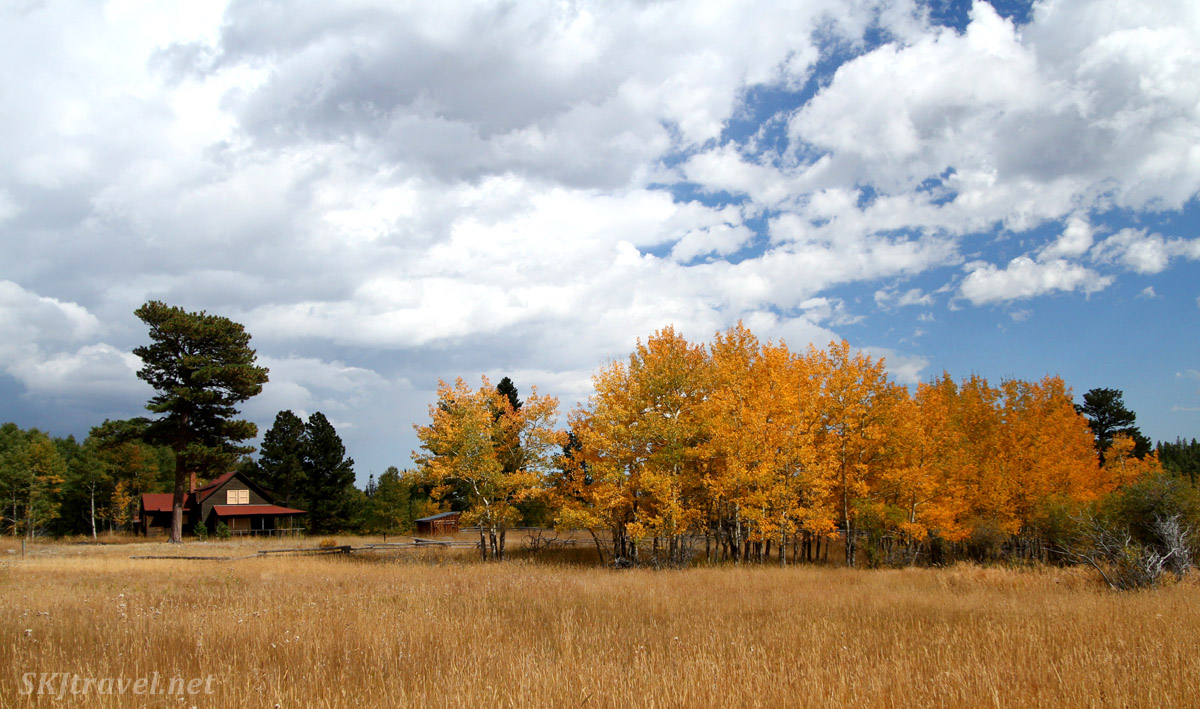 Part of this valley is filled with a wetland habitat which was "constructed" by some industrious beavers who have built dams which have formed a series of ponds. I have never seen a beaver around here even though there are many beaver ponds in this region. I am just dying to spot one in the flesh! 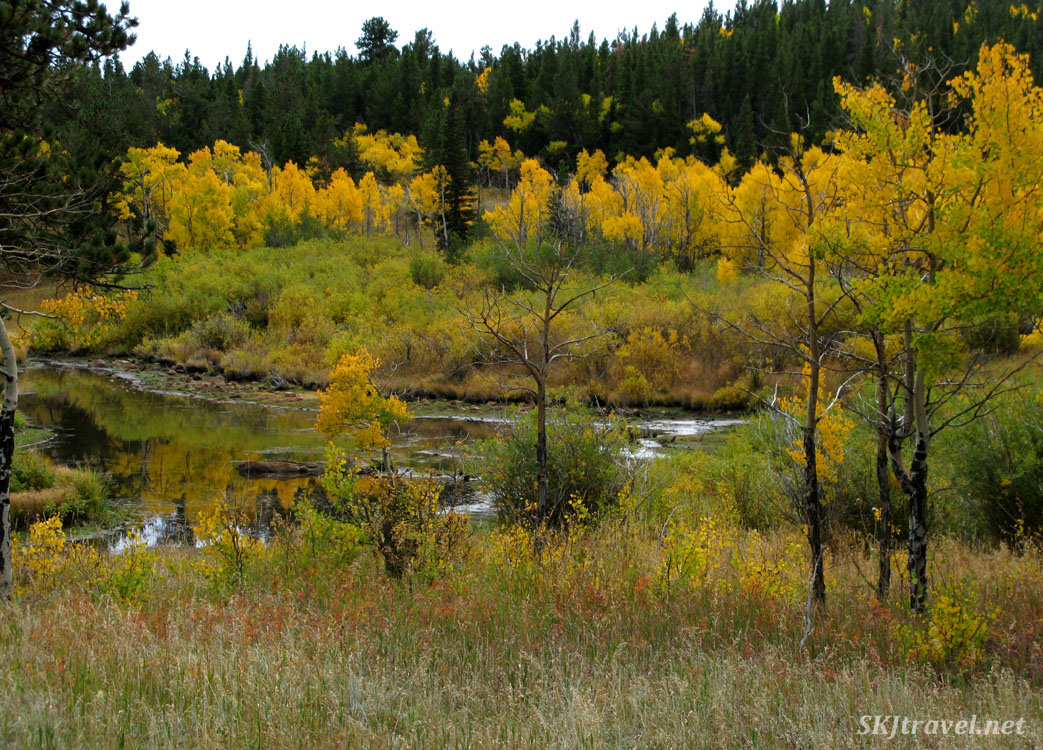 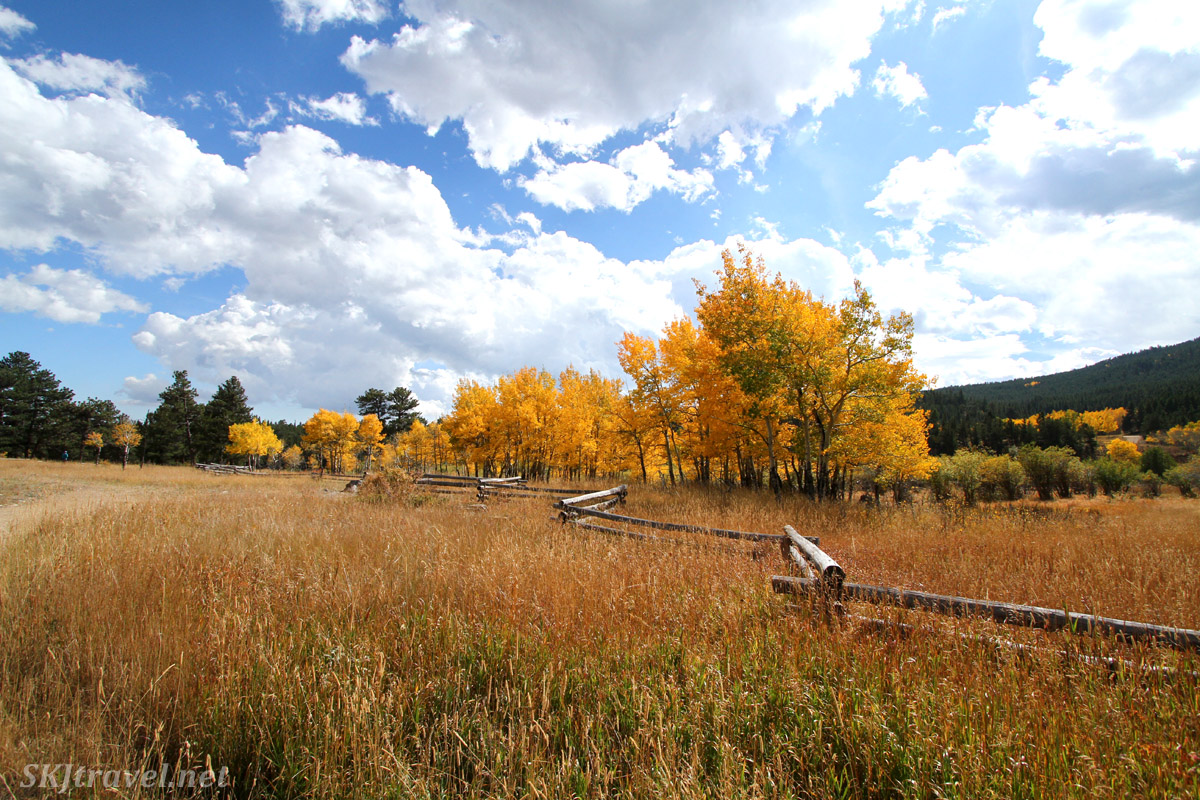 And now we arrive at the old Blue Bird mine. It wasn't christened as such for the bird or the fowl's melodious name (I like the word "bluebird"), rather for a type of blue mineral, azurite, found inside the earth along with the silver for which the mine was established. According to the Boulder County Open Space website, "Azurite was known to the Ancient Greeks as kuanos, which means 'deep blue,' and is the root of the English word cyan." Here are a few pics of the mine itself, though the entrance is blocked, you can feel the cold air coming from inside if you stand next to the grate, and the mining cart tracks still emerge and lead into a pile of tailings. 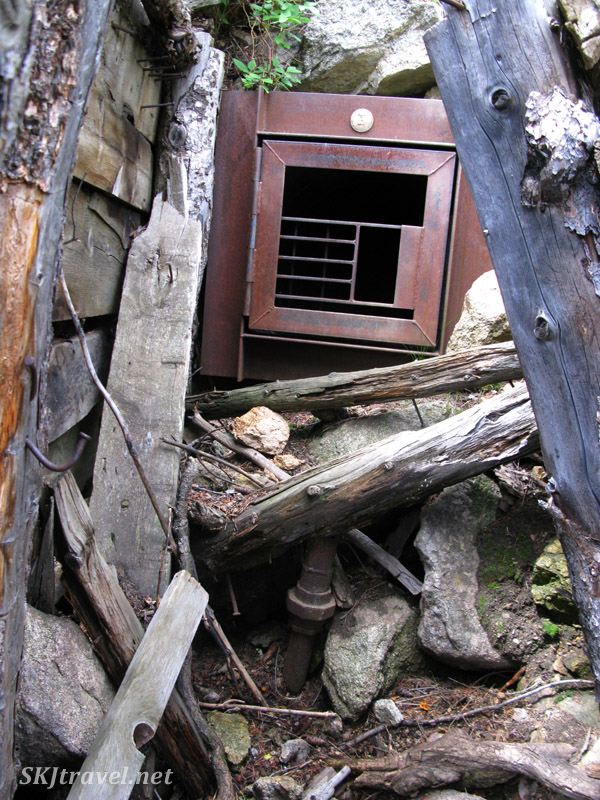 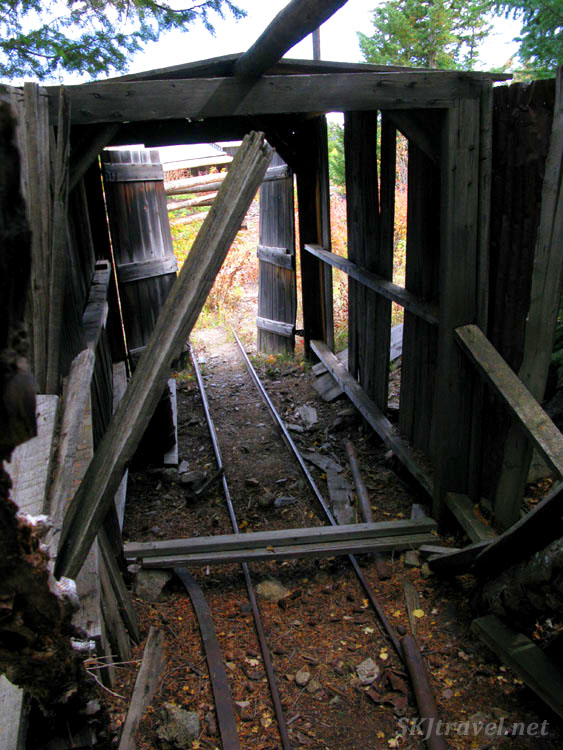 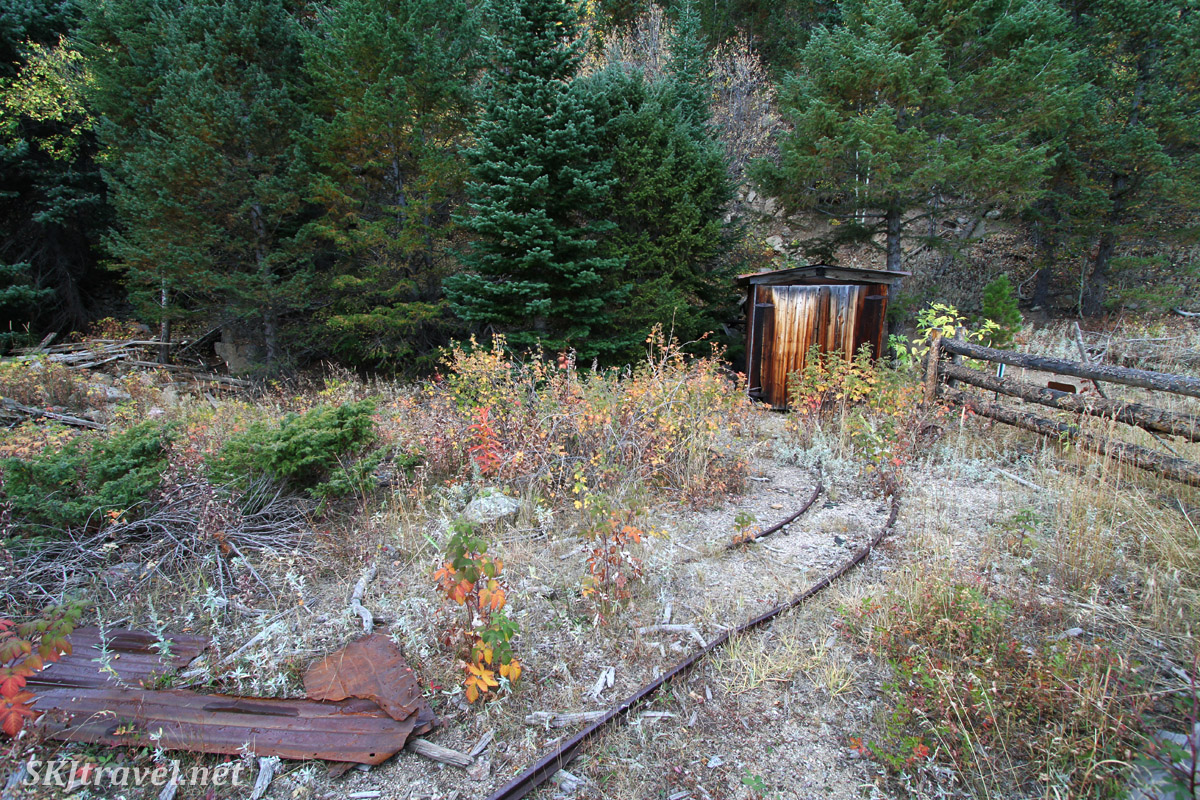 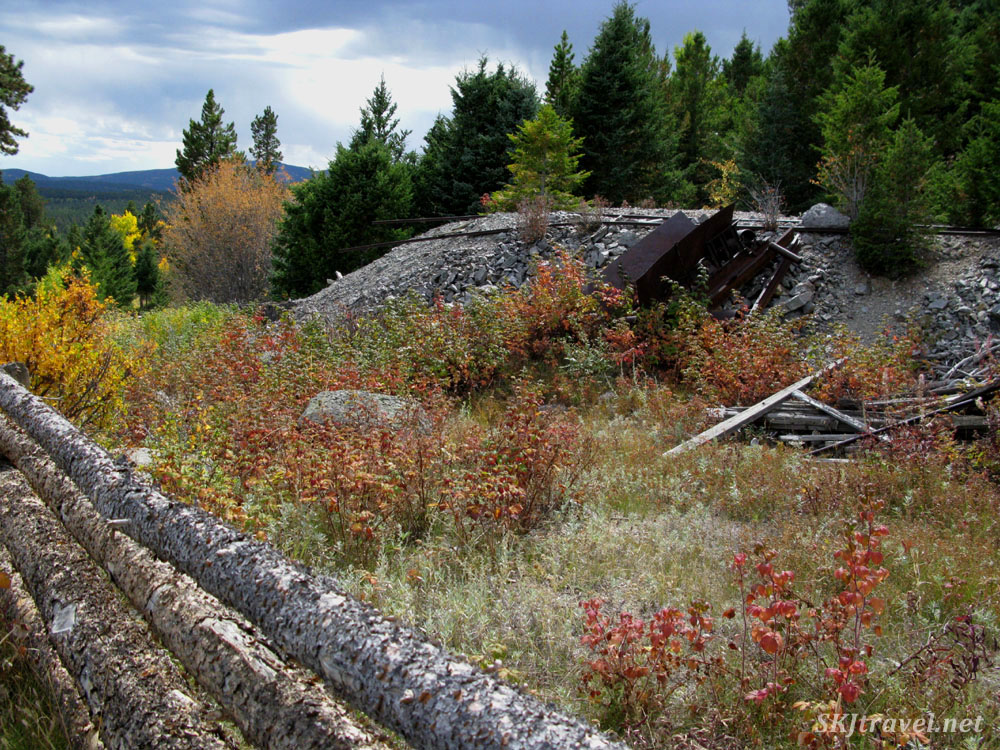 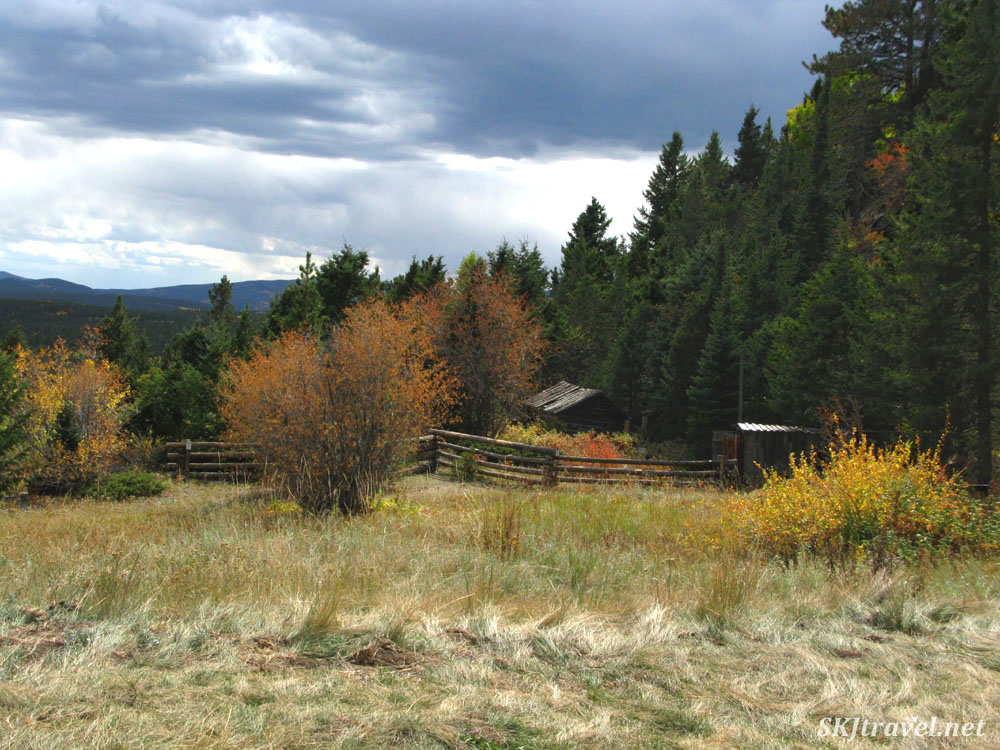 This building was originally the bunk house for the working miners. When the mine waned at the advent of a crash in silver prices, the Switzerland Trail railroad began bringing tourists to the area. The Blue Bird mine became a whistle stop on the train route and the bunk house was converted to a boarding house for visitors over-nighting. I love the assortment of artifacts people have found and assembled at what I believe is the old ticket window for the train. 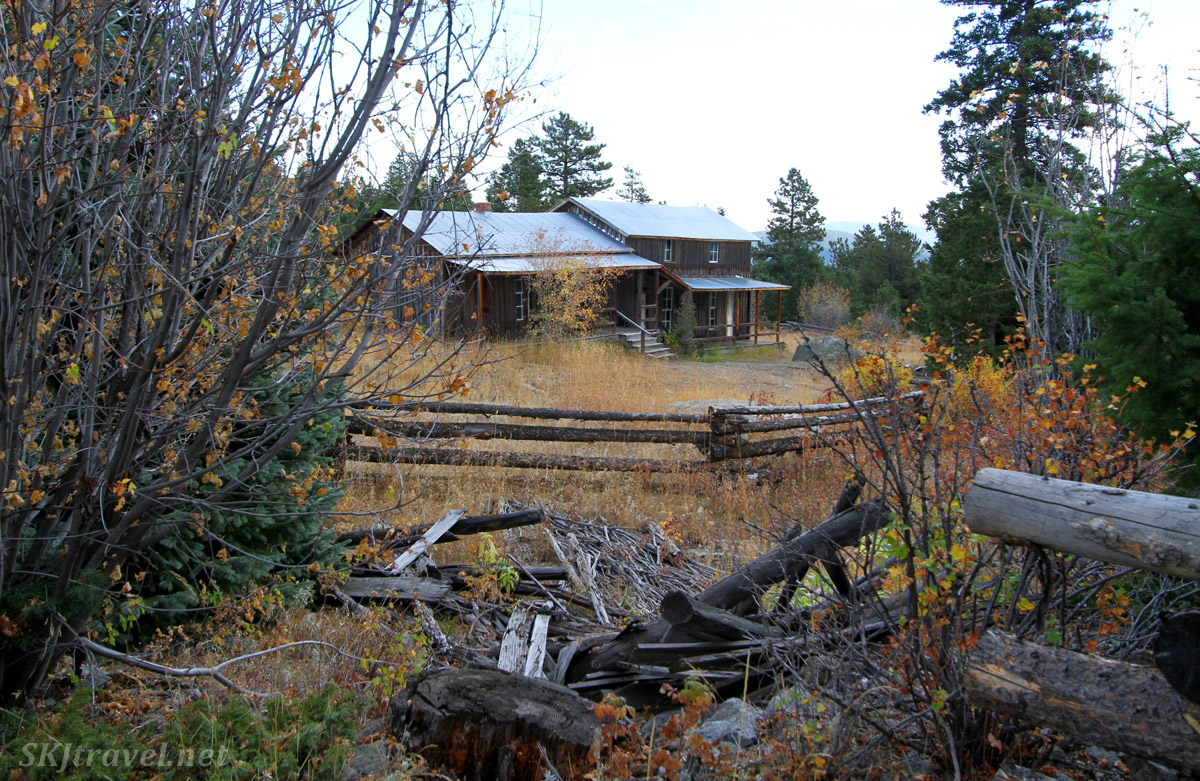 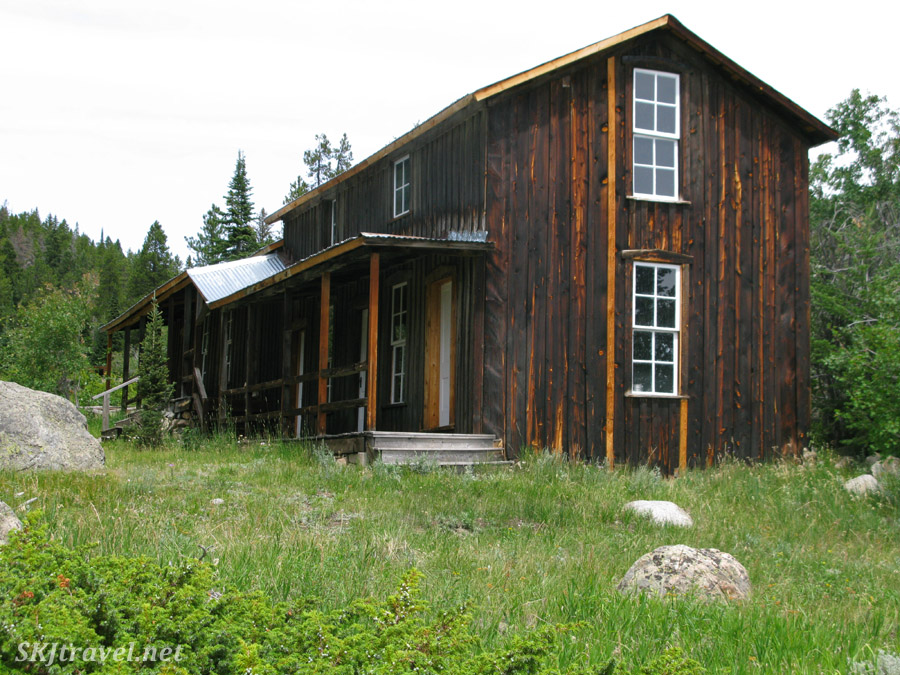 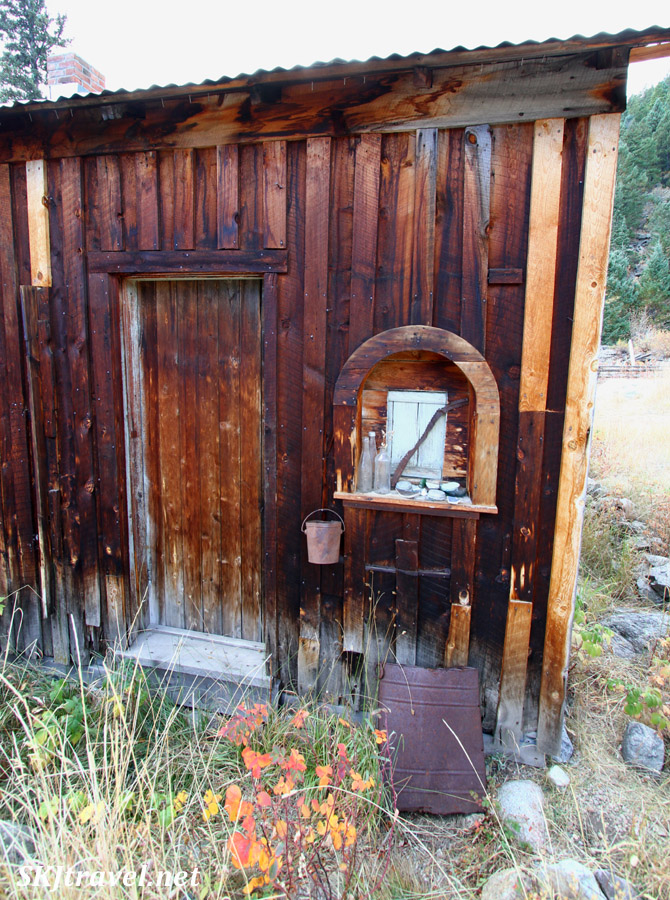 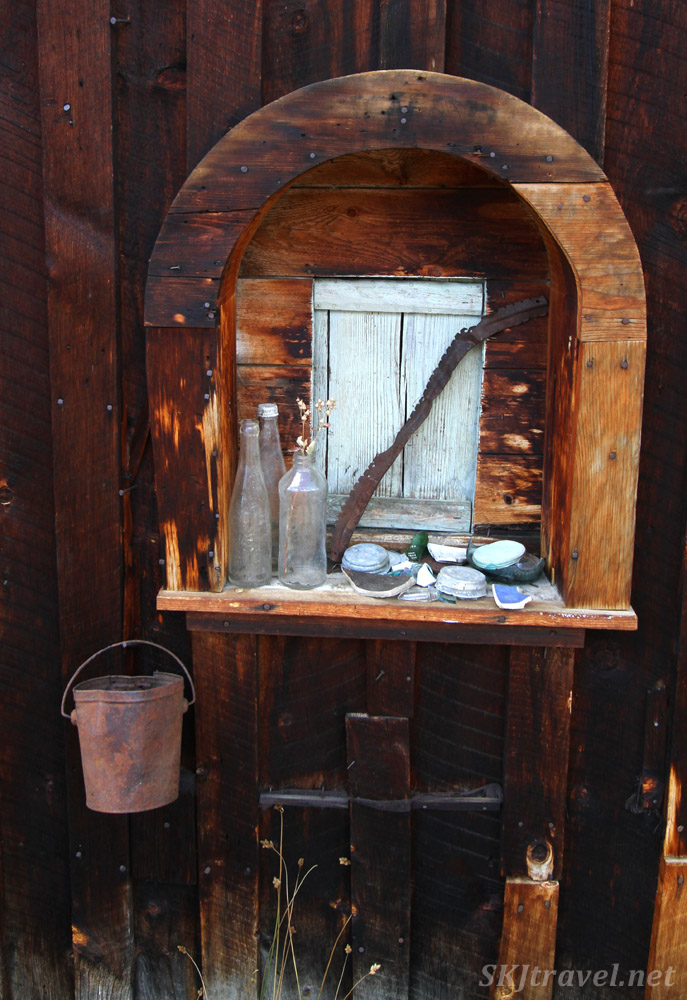 The 1965 remake of the movie, "Stagecoach" was filmed here and the bunkhouse was depicted as a stagecoach stop. So in addition to the musical artists who visited here, Bing Crosby and Slim Pickens also left their footprints.

The chicken coop is still intact as well as some outhouses and sheds, all of which are wooden. Most of these were built in the late 1800s, but the caretaker's abode built later was a solid structure of stone and brick. The mine ran on and off over nearly 100 years, closing forever in 1964. In an amazing coincidence, I met a man whose family was the last caretakers and he spent part of his childhood here at this house in the summers in the 1950s. He doesn't live in the area and I met him through a friend who lives on the East Coast whom I met in Prague. Random, small world! I don't have a photo of it, but in front of the house is a large cement pit for a pool which was eventually used just to hold trout. 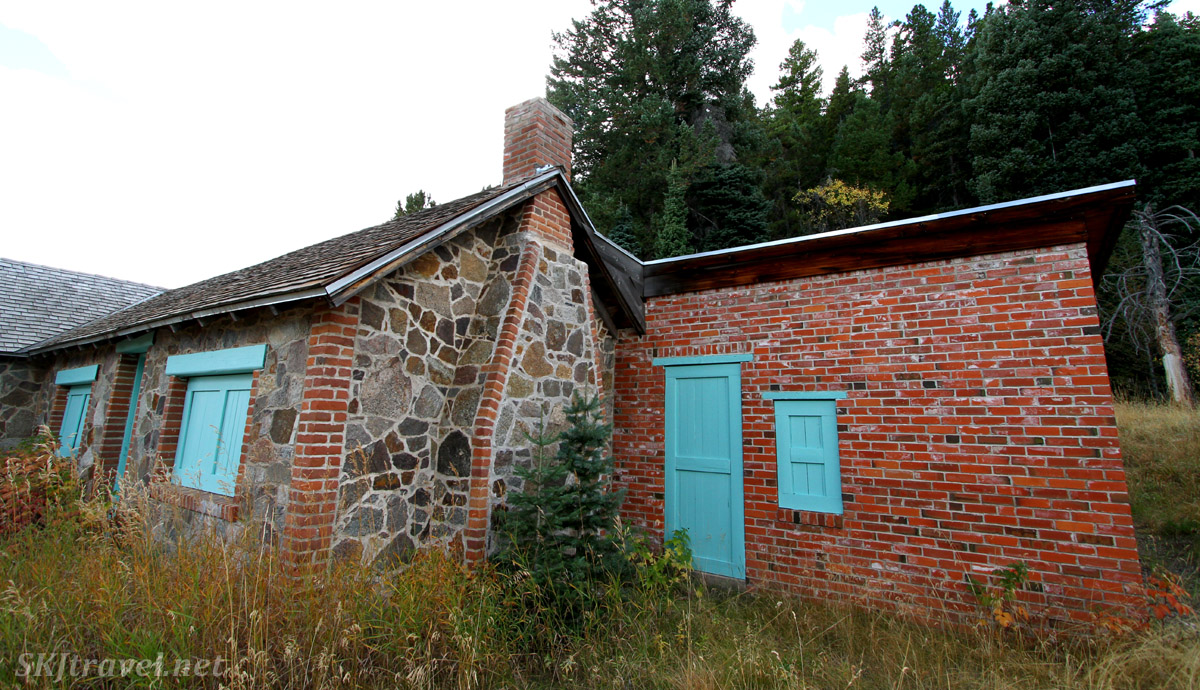 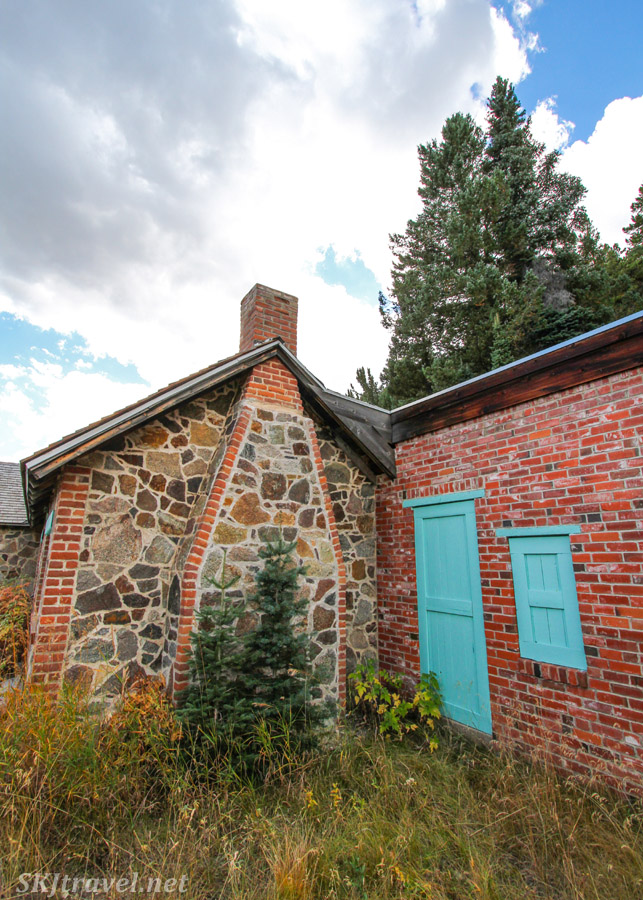 Just behind the bunk house runs the North Boulder Creek, and the hiking trail that leads from the Blue Bird mine to the DeLonde homestead parallels the creek for awhile. So this is just a delightful and easy hiking loop that I recommend to all who visit me here in Nederland ... you have beautiful landscape with dynamic seasons, a creek, a valley, mountains; and you have many historical components that gave our little nook of the world its multi-faceted vitality. 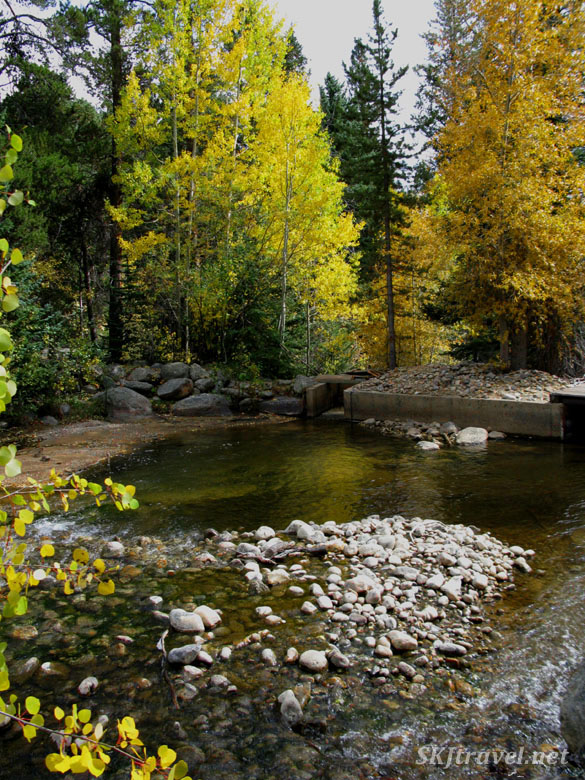 A little end-note ... every year Nederland hosts our town's heritage weekend, called "Miner's Days." When I first moved here it included a parade and everything, and most of the athletic competitors were aging local miners. Now, there's no parade, only the athletic competitions, but what's cool is that even though the old "real" miners have dropped out of the competitions or passed on, there are a lot of young competitors. This year (2015) there were up to 10 entries in the events and also a women's competition -- they did all the same events as the men. The competitions are all activities that miners of old did every day ... such as mucking, where you shovel dirt or rocks into a mining cart as fast as you can until it's full then push it down some tracks and empty it; spike driving, where you pound railroad spikes into a wooden trestle with a sledgehammer to secure a track; hand drilling, where you use a hammer to drive metal spikes into solid granite rock as deep as you can in 5 minutes ... this is how holes were hollowed out in the rock to put dynamite in to blast the mine tunnels and also build the railroads. We're a very small town but take pride in our founding heritage.

Want to visit Nederland and the Switzerland Trail? You can come stay with me! I rent a small studio at my house to vacationers and would love to have you visit me. See my listing at: https://www.airbnb.com/rooms/59868 for "Cozy and Quiet in Nederland."