Ancient People in an Ancient Land: the San of Namibia

Content warning: If for some freaky reason you can’t handle or don’t appreciate indigenous nudity, then this post is not for you.

One of Earth’s most glorious and ancient geologic creations is the diamond. Before plants had even crept their roots up onto the dry land outside the salty womb of the Pre-Cambrian era, the mantle of our molten planet was already crushing minerals in the middle of its stable continental plates with terrifically immense pressure and heat, forming the most perfect of crystals – diamonds. (Usually they make their way nearer to the surface via tubes formed during periods of deep volcanic activity.) That most beautiful of stones has been held and cradled in the Earth for so very long, before she ever even dreamed up the wild notion of humanity.

The indigenous people who eventually staked their lives on top of these gems, as if all forms of ancientness must be cradled in the same space, are the San people of southern Africa – perhaps the oldest ancestral tribe on the planet. A study of African genetic diversity indicated the San to be one of the five populations with the highest levels … meaning they are among the oldest surviving people on our planet – the seed, the tiny seed that much of African population and culture grew their roots from and spread. Imagine a 70,000-year old tree, it’s height and girth and root system, and one tribe nestled, still alive, in the middle. Where the planet’s oldest gems lie, so do humanity’s – a cultural gem which has withstood the pressure of time like few others. 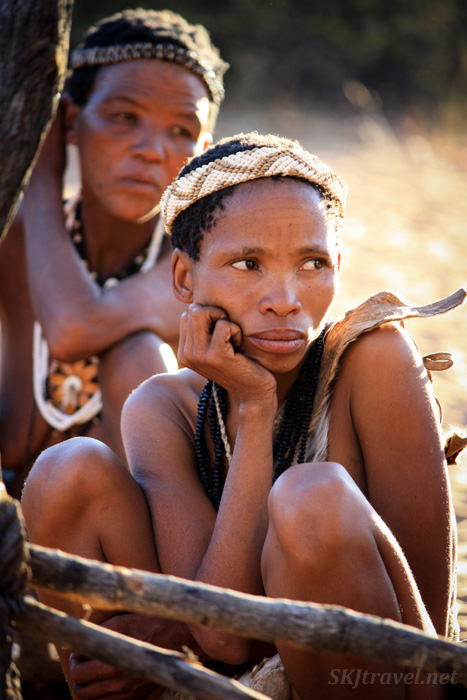 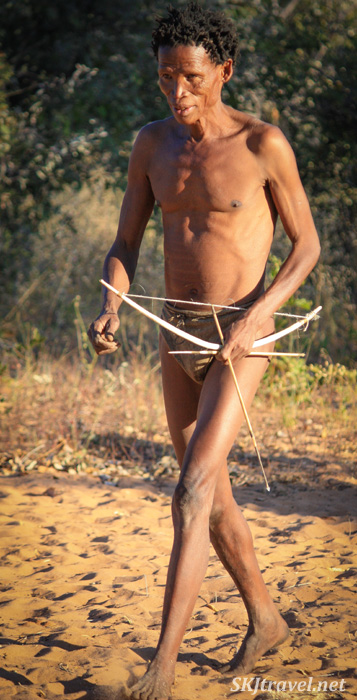 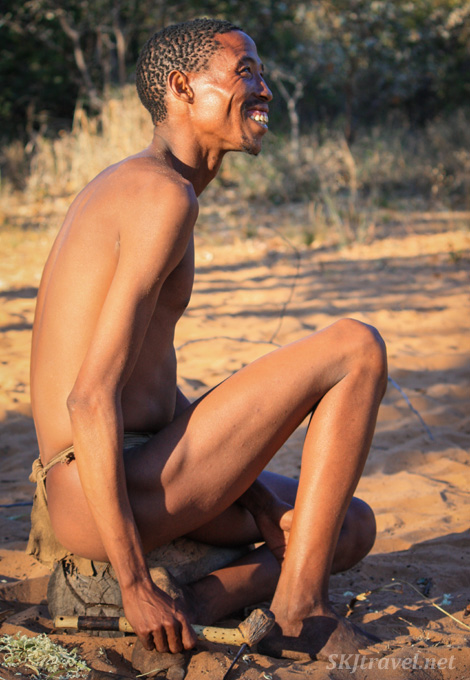 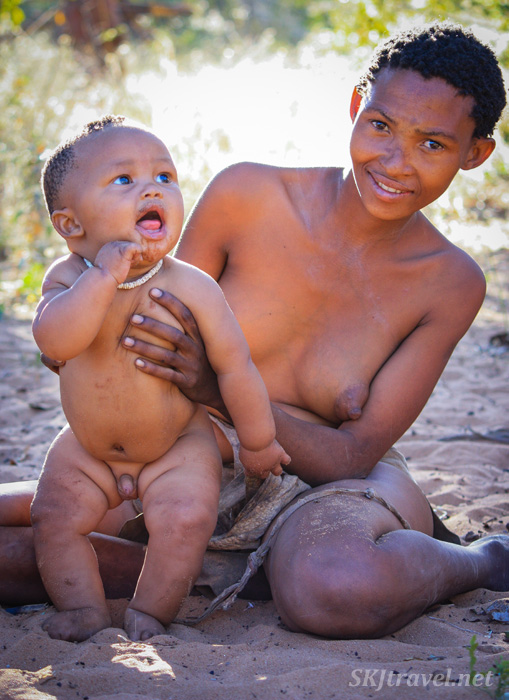 A sign pointed down some sandy tracks directing visitors to “the reception area.” We pulled up to a large tree, parked and waited as per the instructions nailed to the tree. The tree was, in fact, the reception desk for the Ju/'Hoansi-San Living Museum. (like all living museums, it’s a place for this tribe to preserve their ancient traditions and share them with visitors) Surprisingly quickly, a guide/translator came to the car and took our “order” from the list of options available for tourists, which was nailed to the reception tree … we could choose to see craft and tool-making, or singing and dancing, or a full day witnessing many different activities, etc., there were 5 or 6 options. We arrived late in the afternoon and had only a couple hours, so we chose to see craft and tool-making. We were pointed down a sandy path through some dry, scrubby bushes, and soon we came into a clearing.

Here women sat making jewelry and purses (which are for sale in a sort of outdoor gallery near the reception tree), made from natural materials such as seeds and stones, stitched with twine ... really lovely and high-quality creations. The first woman below could hardly be a better model for one of her necklaces. 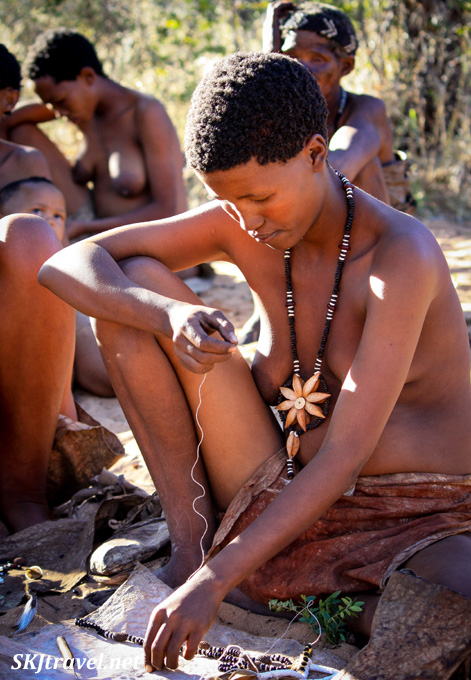 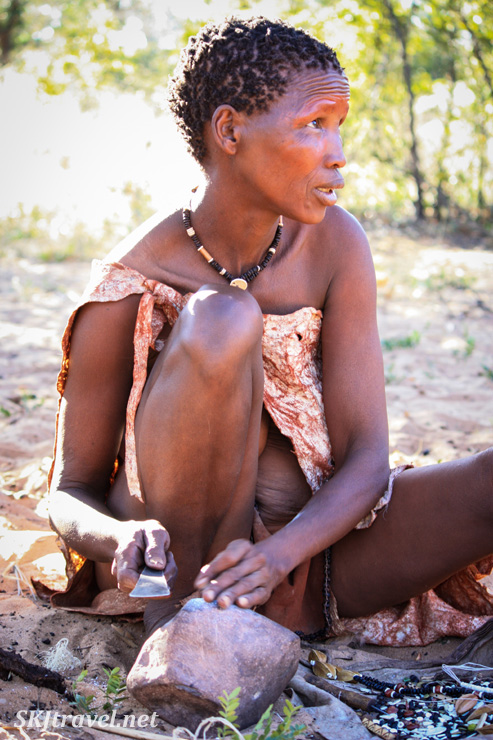 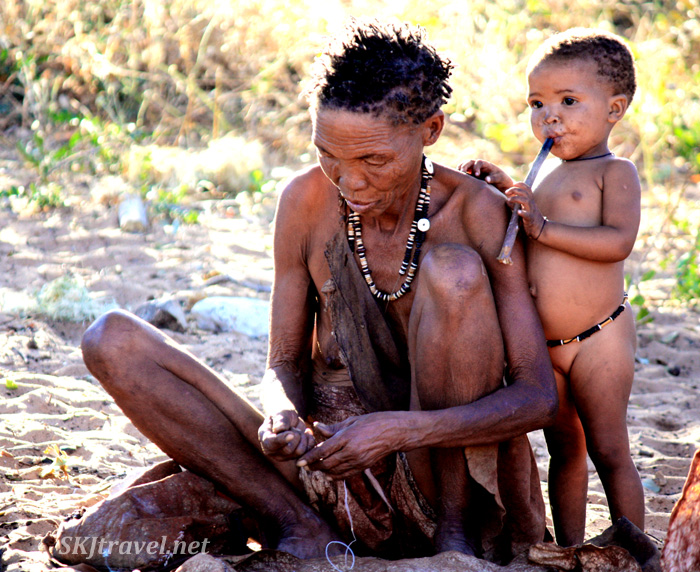 Men were preparing materials for traditional tool making. Dressed in traditional loincloths, the men’s bodies were tall, slim, taught and impossibly lithe. The San are traditionally a hunter-gatherer society, and have lived with little modification to their traditional ways until the last century. The hunters used poison arrows to shoot their prey, following it sometimes for miles while the poison worked into its system and the animal finally collapsed. The men at the living museum made a bow and arrows from scratch right there on the spot for us. I was amazed at how little time it took to construct them, and then we got a demonstration and were allowed to try shooting an arrow if we wished. Knowing without question what a spectacular failure I would be, I suppose I should have tried it purely for the amusement of the San, but I was timid, and refrained. 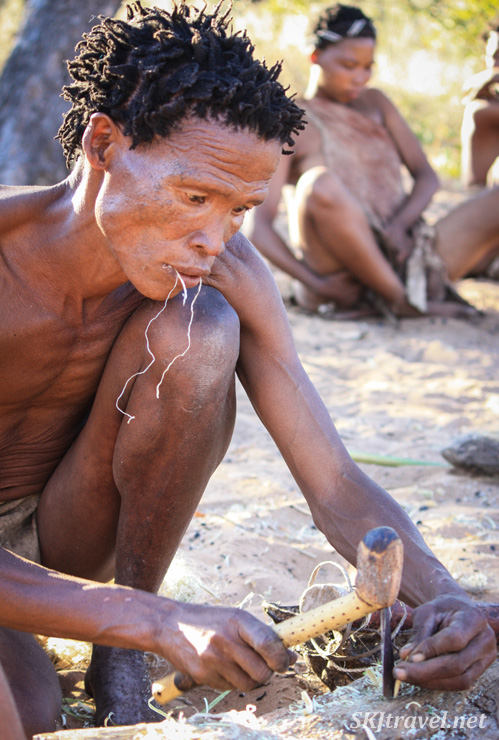 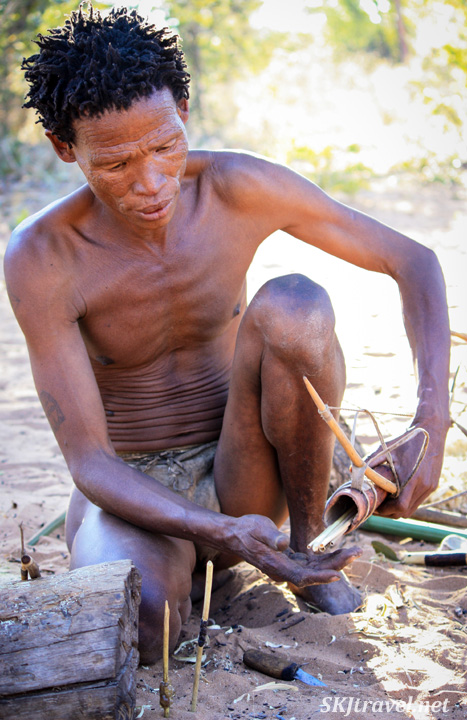 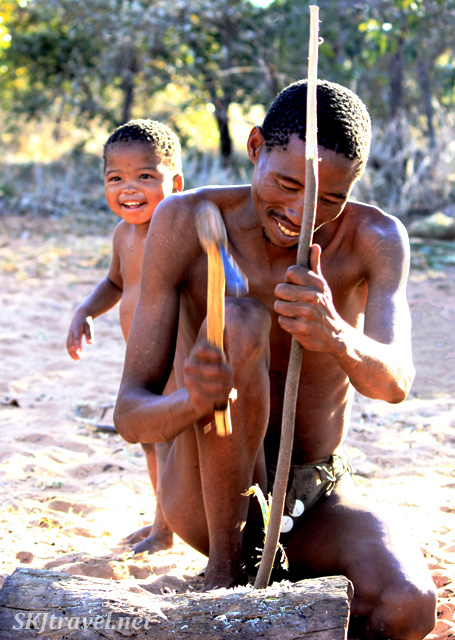 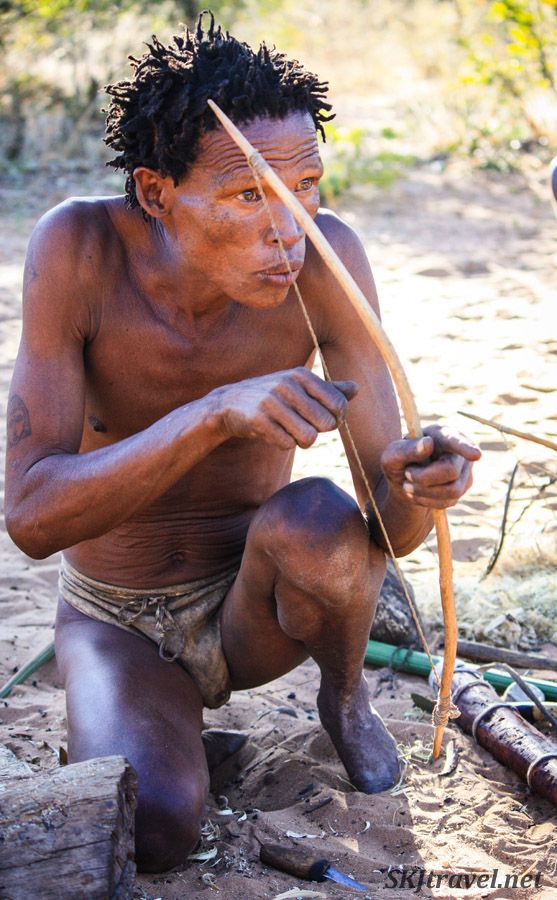 The San are keepers of humanity's most ancient knowledge ... they can still recreate the most sacred of our discoveries, those that transformed us, elevated us and led us to transcend. They maintain the roots of culture. Some of the most ancient thoughts have been thought there -- the most ancient words spoken and listened to, growing into many eventual languages. These people are like the crocodiles … incredible survivalists from whom other cultures have gone on to evolve, but they were so perfect that they stayed, the kernel, largely unchanged for so long. They were efficient, proficient, champions of cultural evolution. I said in my first thoughts on Namibia (in my post, "Size") that the curtain of time feels thin here, the past profoundly tangible. But on further reflection, maybe that quiet feeling of the profound isn’t because the curtain is thin, rather, in fact, the issue is that it’s so thick -- there’s just so much that has happened in this space where the same core of humans have lived for tens of thousands of years, all of it has stacked up until you just can’t help but walk through some of it. Existence here doesn’t have the light weight and texture of air; instead it’s like wading through water. Below, men start a fire by hand with a stick and kindling. 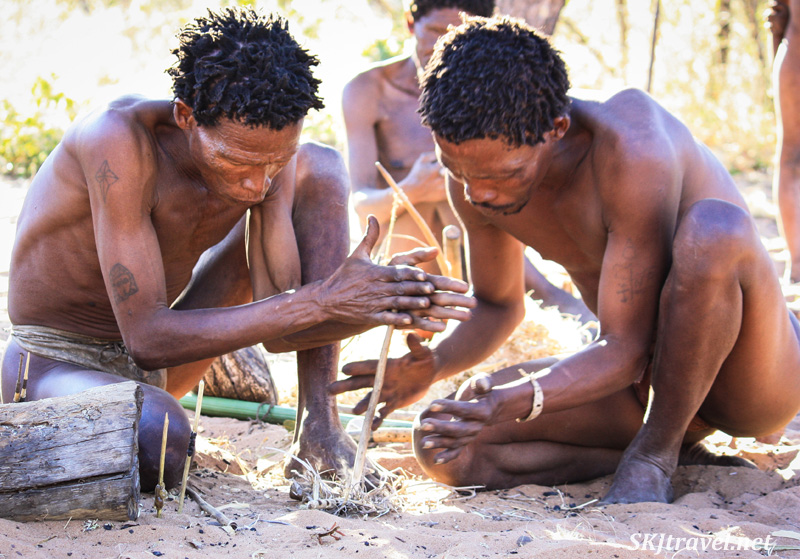 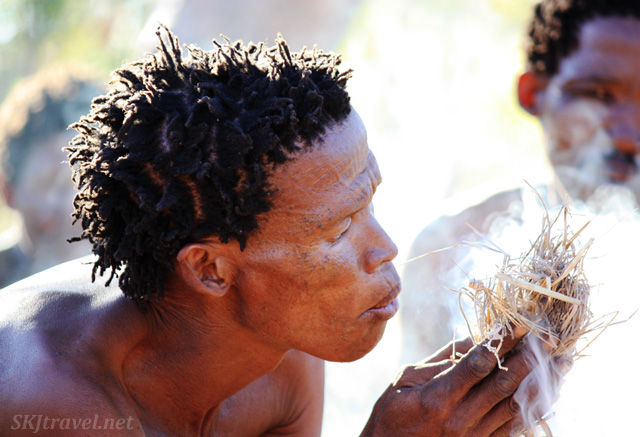 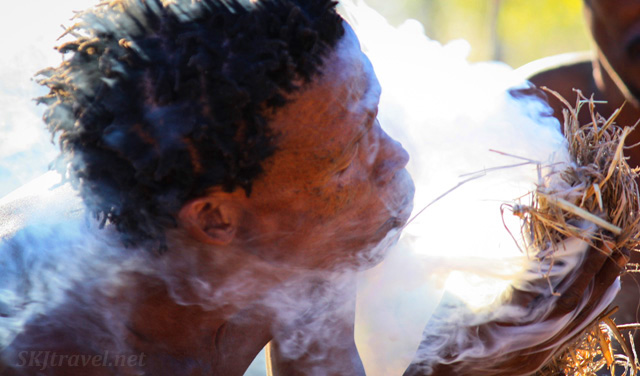 Other authors have spoken of transcendental experiences, witnessing the past literally before their eyes, for example Tom Brown Jr. of Native Americans in The Tracker and James Stephenson of another ancestral African tribe, the Hadza, in The Language of the Land. They claim there are special sacred places where you can sit still and the ancestors will appear ... not to communicate with you, but they are simply kind of like ghosts, going about their activities doing what they did in the past and you can sit in silent witness. They say it's like pulling back a curtain in these places, but maybe it’s just that time is not an arrow that has moved forward, as we often imagine, but perhaps it's more like a series of slides -- each second is a slide and you can insert yourself at any point in the slide show. Maybe some spaces on earth are more accessible for sitting further back in the show, maybe where the space is so thick with human history.

The beauty of a diamond is its complex refraction. One ray of light hits it, and the light refracts into many beams directed back out into the world. The San children who roamed around in the clearing seemed so carefree and infectiously joyous. It was as if the sunlight pierced the men and women in the clearing all the way through to the ancestor spirits of that long ago mother tribe, refracted and came back through the wide eyes and shining smiles of the children, projecting that deep history up and forward through their plump little bodies. Growing up in the living museum gives them the opportunity to carry the ancestral traditions and spirits in their hearts and keep them alive for the whole world to hold. 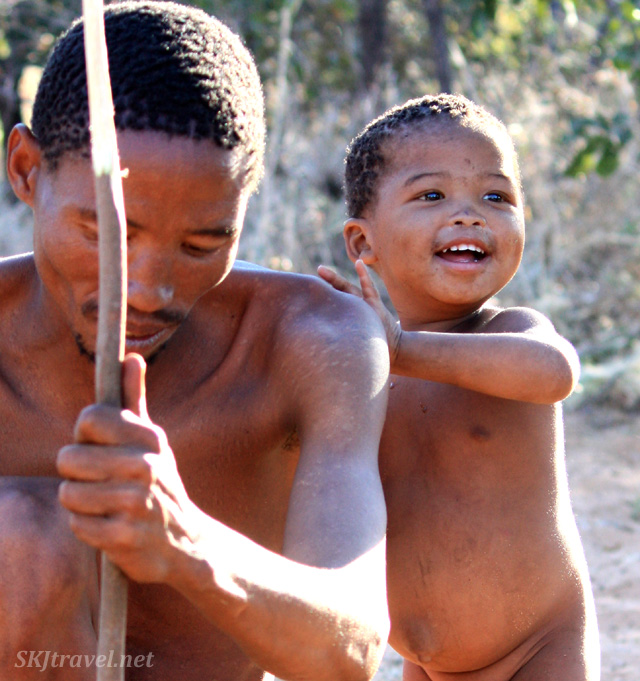 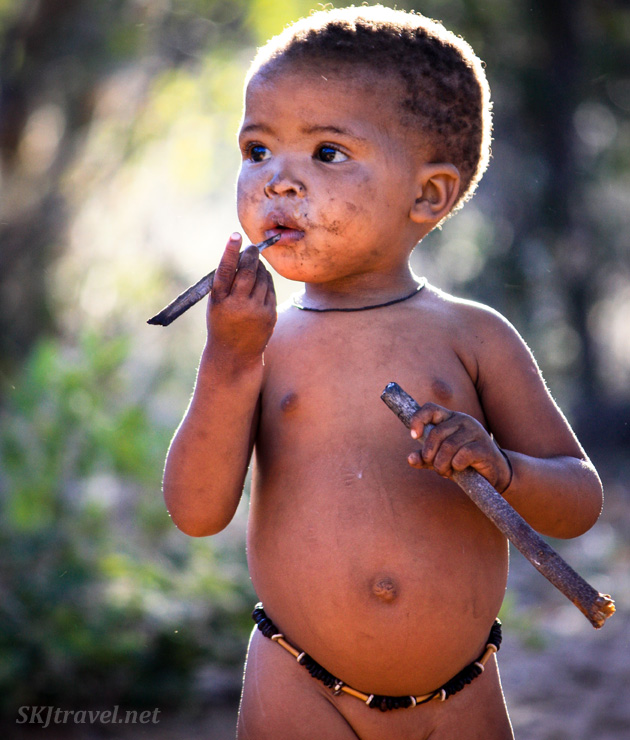 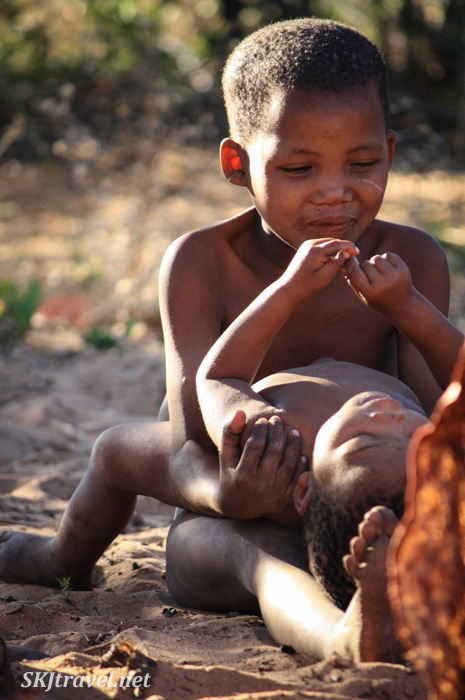 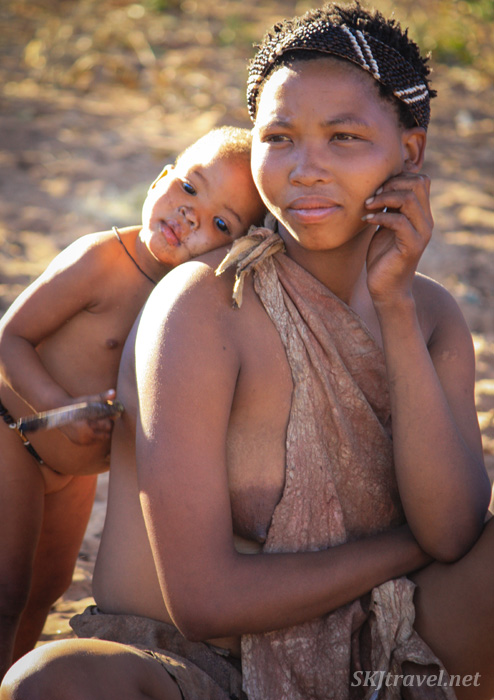 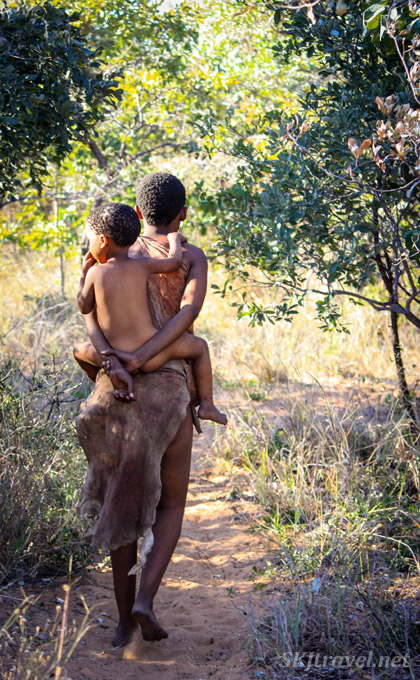 This photo below happens to be my favorite of all the photos I took at the Ju/'Hoansi-San Living Museum. I love the expression on the face of the kid on the left (click on pic to see larger) and the way the children are accented in the lighting. 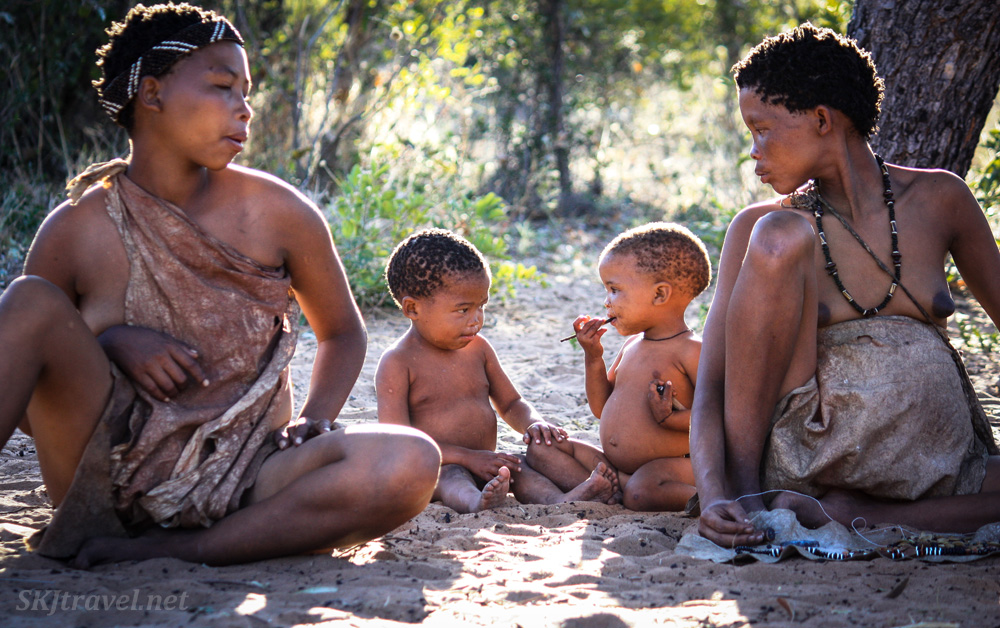