Namibia - Vleis of Death and Life: Sossusvlei to Epupa

I mentioned in the previous post that even the moon was remarkable in the vast country of Namibia, that it seemed so close to Earth we could drive right into it, as it rose, for a picnic. And so here we are. You probably didn’t know that scrubby little trees grow on the moon and that parts of it are red. 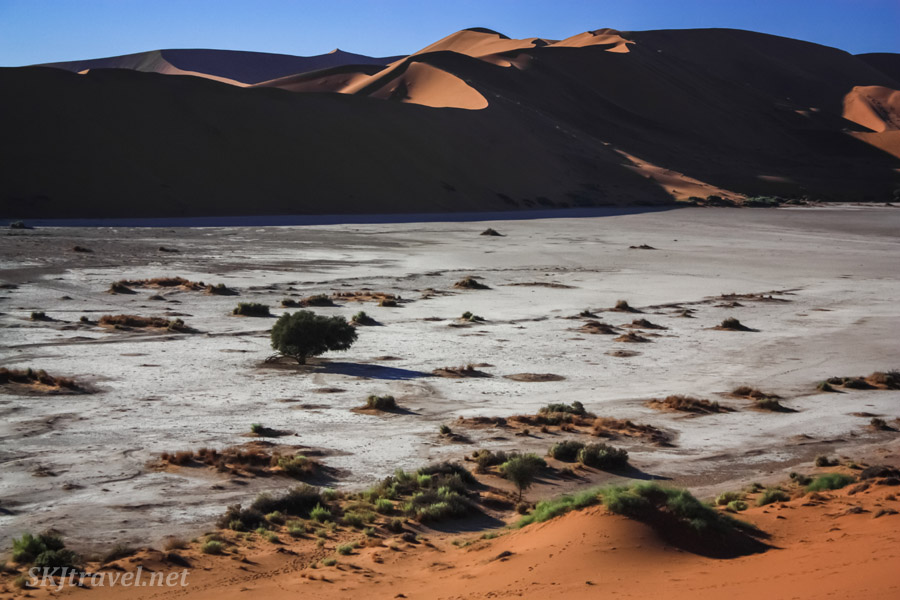 Nah, I’m just kidding. We were really on an alien planet. Well, OK, it just looks like one, anyway … a wonderfully strange and surreal landscape inside Sossusvlei National Park. Because I was on a fixed safari, I didn’t do a whole lot of research into where we were going, it’s not like I could make any decisions about my itinerary. So when I was told we were going to see the Dead Vlei, I was intrigued but didn’t know what to expect. Any place with “dead” in the title is going to appeal to my curiosity. More so than someplace with “vivacious” or “joyful” in the title. Perhaps I’m just a generally morbid person … death and darkness have a special tunnel into my little soul. The Dead Vlei, however, is anything but dark.

We’d spent the early morning among the graceful red Sossusvlei dunes. Did I mention they were red?? I’ll show you more in an upcoming post. We were told the best approach to the Dead Vlei was to climb up a particular dune and slide down into it. The view from the dune top was interesting if not wholly compelling to me. 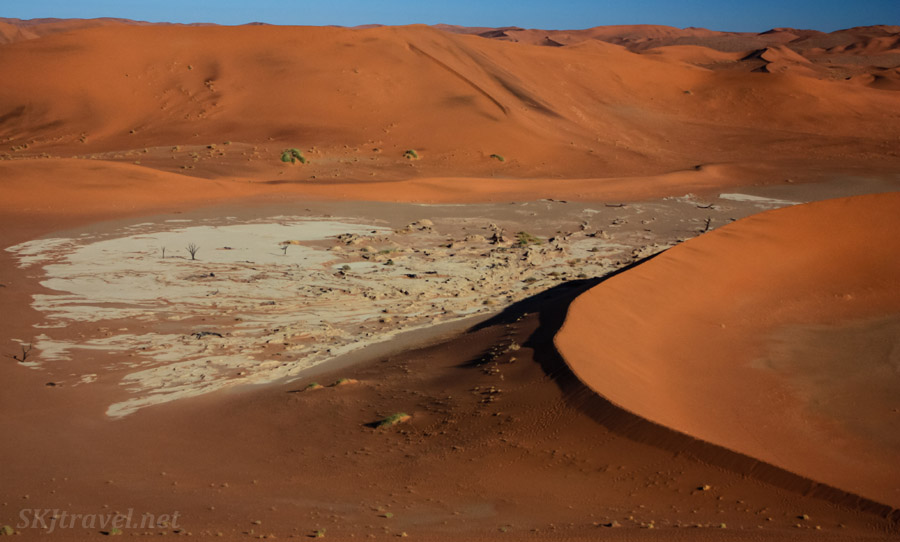 But down, down into the vlei I romped. I sank into the sand up to my knees with each step, creating little avalanches. It would have been way too messy to log roll and deal with being suffused with sand (as was my true desire to do), so I settled for running as fast as I could. Given as how with each step I post-holed up to my knees, I wasn’t exactly The Flash, but it was fun to go as fast as my little ol’ body would take me into this renowned place of death.

The Dead Vlei is a white clay pan in the middle of the dunes. Vlei is an Afrikaans word for a flat area, kind of like a valley. The dead things in this vlei are trees. Once there was water for their roots to drink, but now it’s so dry in the vlei the trees have not only died, they can’t even decompose … there isn't enough moisture to support the organisms that break down the flora to recycle and rebirth it into new life.  The trees are bereft of life, sap, leaves, but not of skeleton – their dry bones have remained here for hundreds of years. 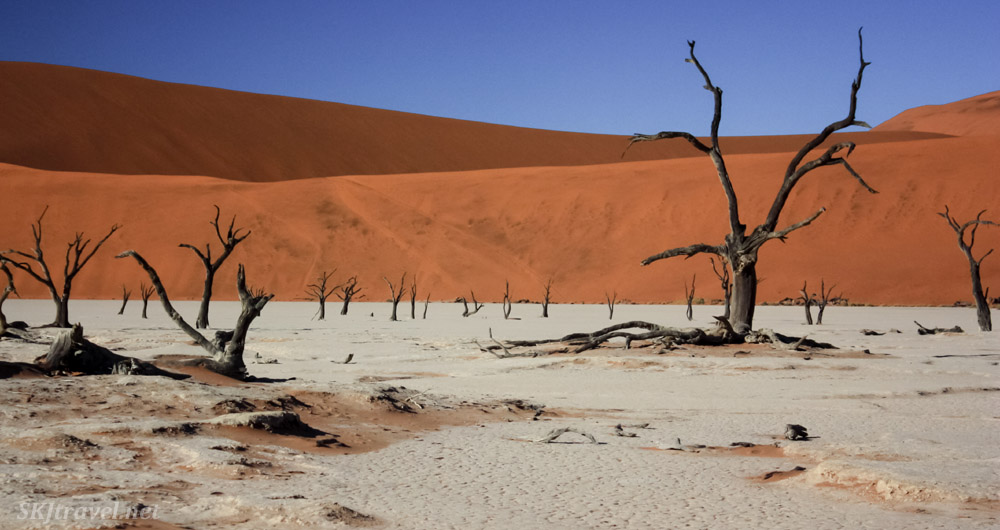 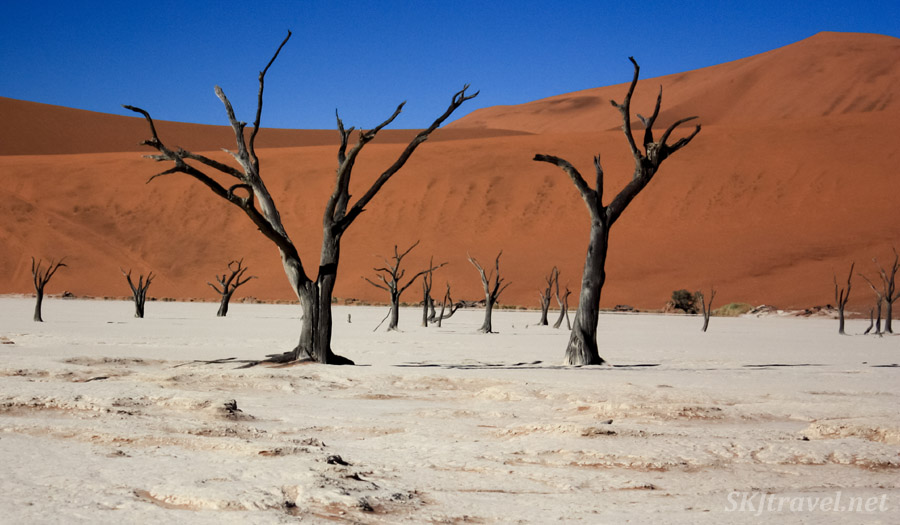 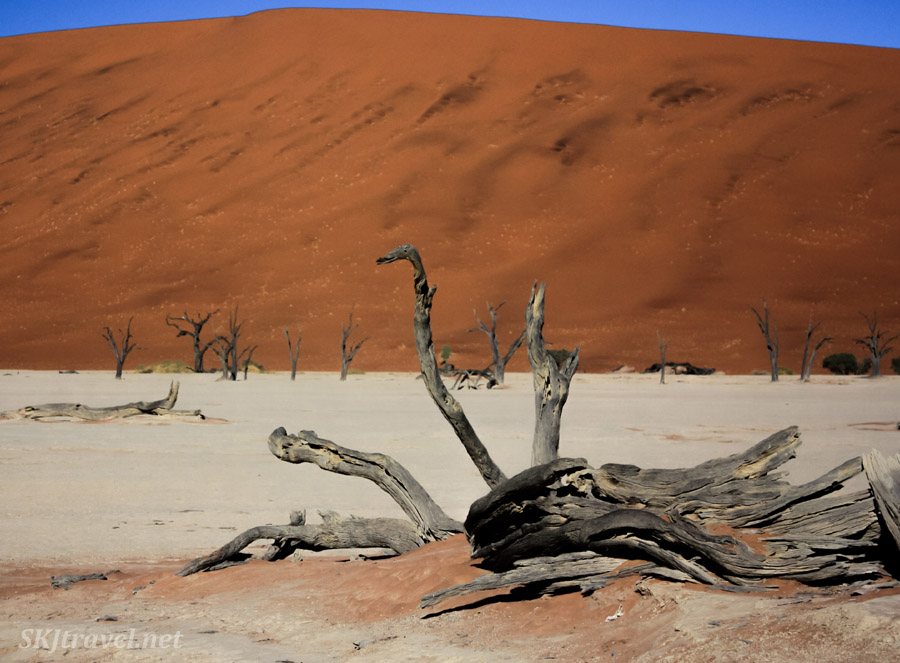 Once on the bottom inside the Vlei of the Dead, it was an eerie world. I thought how strange it would be to have been lost wandering the desert one dark and moonless night and finally stumble into this hard, flat area where it was easy to lie down. You sleep. And you wake up in this stark land of tree bones. You’re in a ghost town, but the wooden structures are the raw trees rather than processed timber nailed together. Abandoned, the desiccated trunks and limbs stand testament to those heady days of life – a raucous age when things grew, and therefore each day was unpredictable … the dawn never knew which limbs would grow that day, by how much, or in what shape. 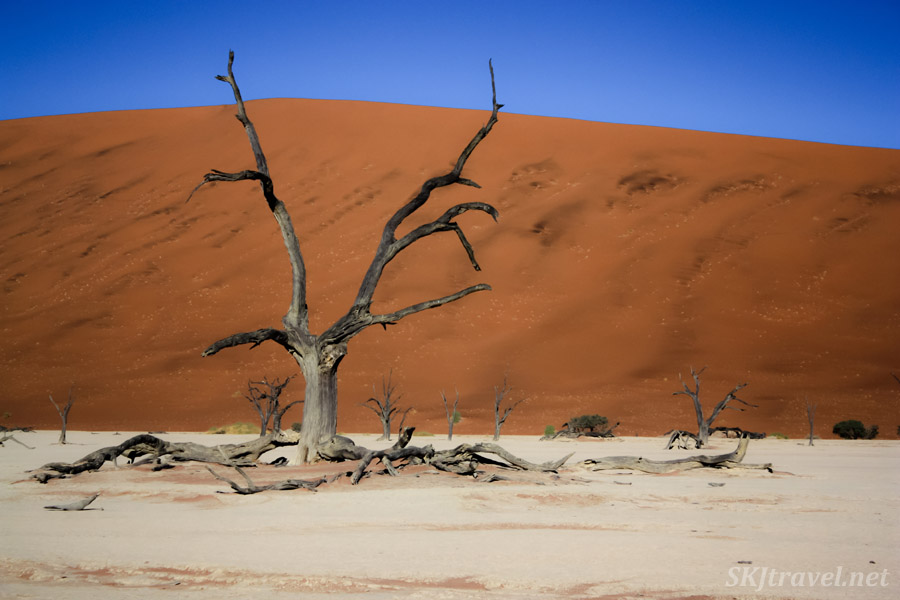 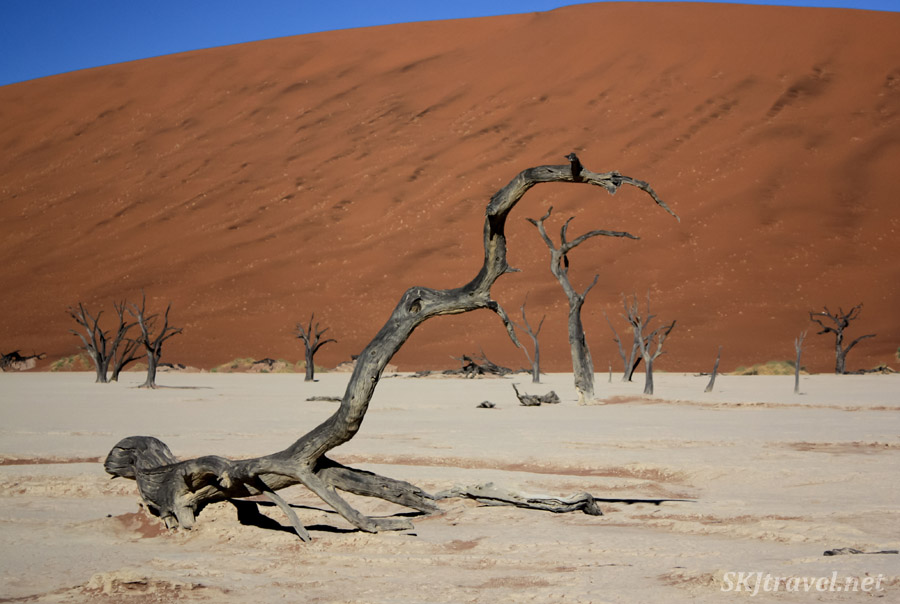 I try to imagine standing there when the last leaf fell, fluttering poignantly to the ground, unaware that its journey was more poetic than most, heralding a new age of sterility with its gentle repose upon the ground, lying solitary as if the green days were just a geologic dream. Then the breeze solemnly carried it away on its shoulders like the coffin in a funeral.

One of my favorite Annie Dillard lines is, “The sea is a cup of death.” So much biologic drama that results in battles and dead organisms. The Dead Vlei is a plate of death. But unlike the ocean, a writer of complex nail-biting plot, the earth down here is a more literary and pensive writer – introspective, a student of detail, exploring the slow heartbreak of being abandoned by time, as the energy and motion that are its expression gradually grow cold and distant, and finally leave like a faithless lover.

I wonder what events those trees have stood sentinel over through the centuries. But actually, upon further consideration, since they dried out, the place hasn’t exactly been a social hub for nature. The tourists, and there were plenty, are likely the things of most interest. For example, me. :) 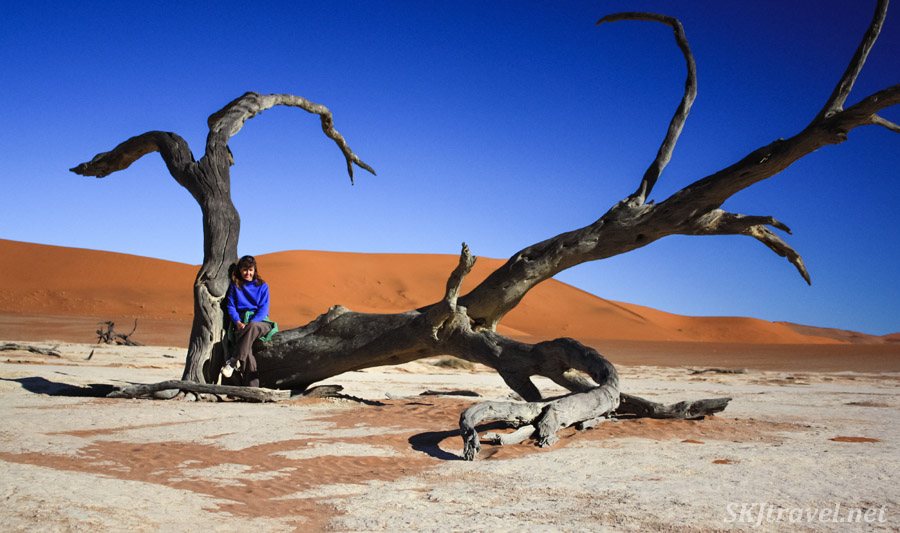 We traveled north from the hills of the red desert. Through more desert, miles upon miles of tan sand in small undulating dunes like wavelets of sand. 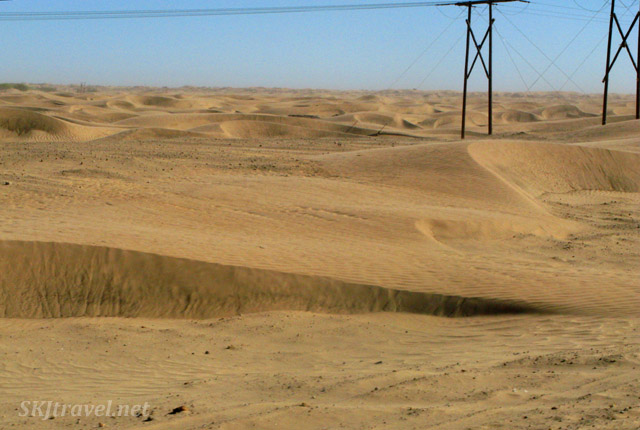 Eventually the land gains topography again. Nearing the Angolan border, rocky hills spring up from the plains. It is an ancient land, purple, red and weathered. Green begins to leak into the landscape in scrubby brush and acacia trees. The vegetation has been splattered across the landscape like droplets of paint, or planted as in a new garden, where the gardener has spaced the bushes with the expectation they will grow to fill in the empty stretches. The Kunene River runs through the dark dirt and sparse vegetation like a line of saliva in a parched and yawning land.  Flanking it, a dense and verdant carpet covers the valley floor … so many trees, like a migrating flock of birds landing for the night.

After crossing so much arid desert land, Epupa Falls erupts from the landscape as if a great vein has been punctured beneath the surface. Water spills and tumbles and roars and sprays, spread so widely across a shelf of land, it seems like it could be fatal … maybe it’s the femoral artery and will bleed out, leaving the surface to shrivel and desiccate like a mummy, another vlei of death. 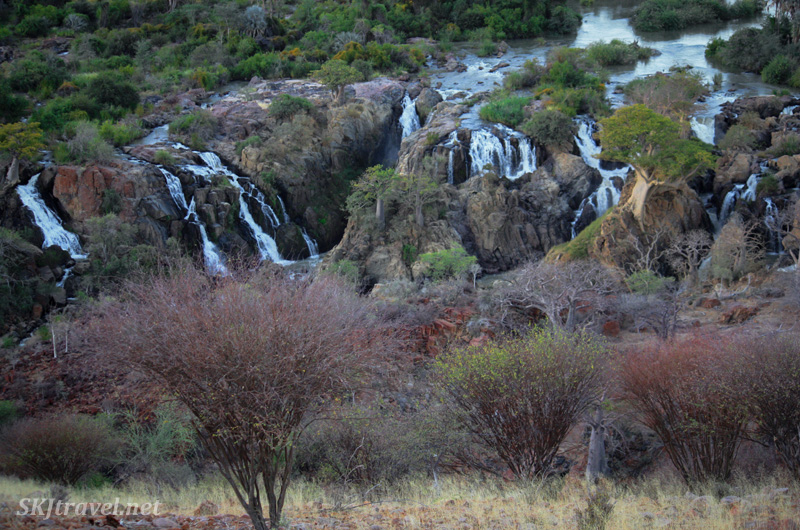 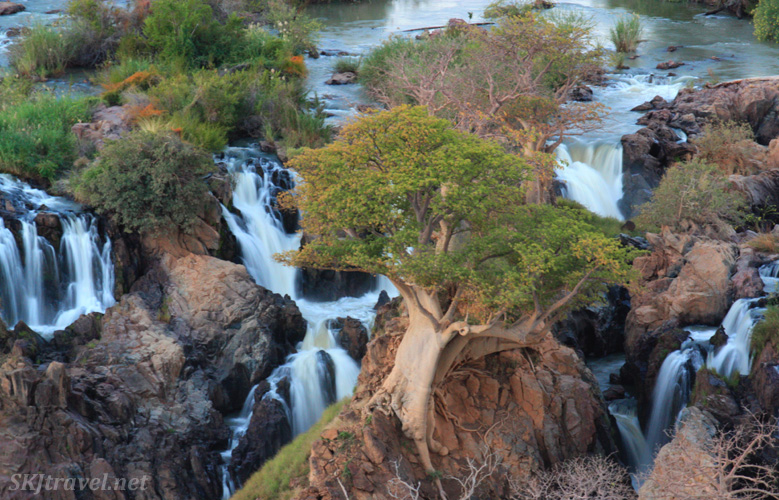 We got up before dawn to watch the sun create a new day behind the falls. 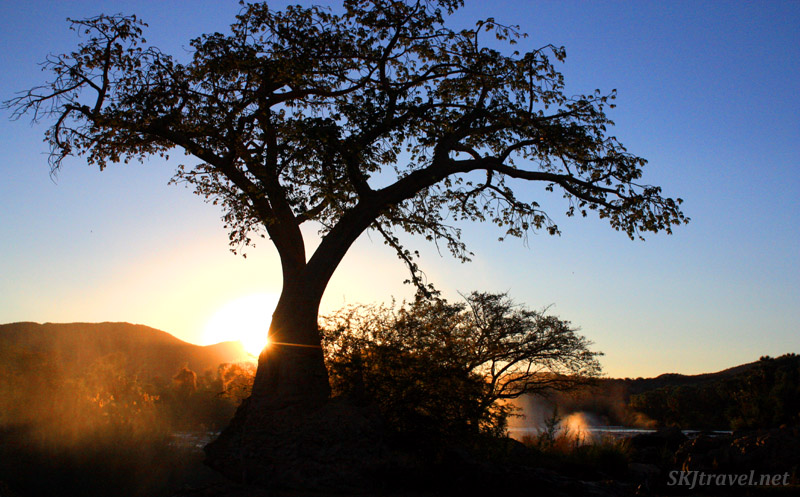 It did a splendid job, but with my little amateur camera and feeble amateur skills, shooting into the sun without a tripod or particularly wide angle lens, I couldn’t capture the morning water’s silk. Nonetheless, no moment spent at a waterfall is ever wasted … these geologic sculptures are liberators of the soul, the tumbling of life’s essence, the freefall of the little molecules most crucial to our existence. 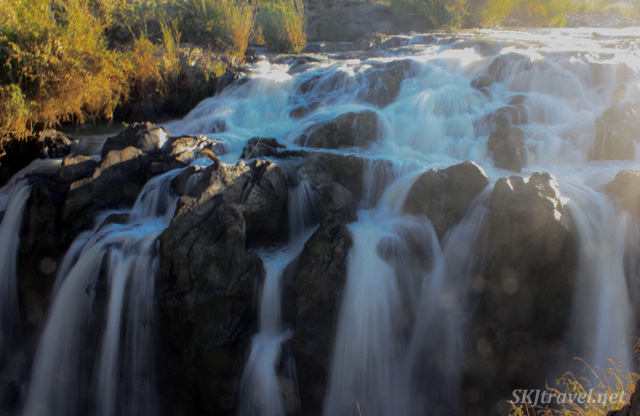 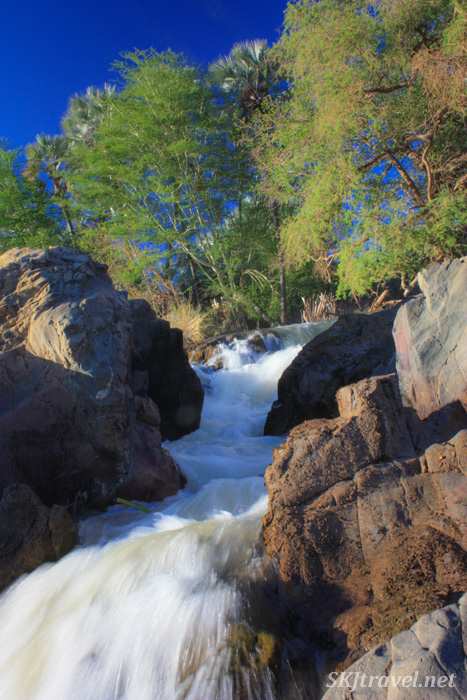 And here next to the glorious falls, the tree trunks are carved with names of people, tourists and locals, who meet their inglorious demise via the most ancient creatures of the river … the crocodiles. 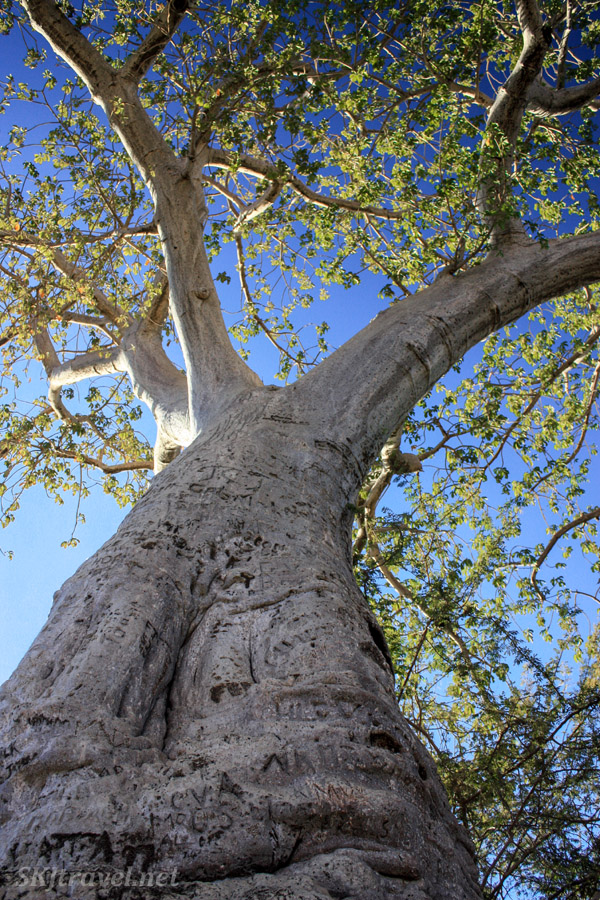 And here are some creatures neatly reflected in the Kunene River: (1) A portly pig belonging to a local villager, probably of the Himba tribe. 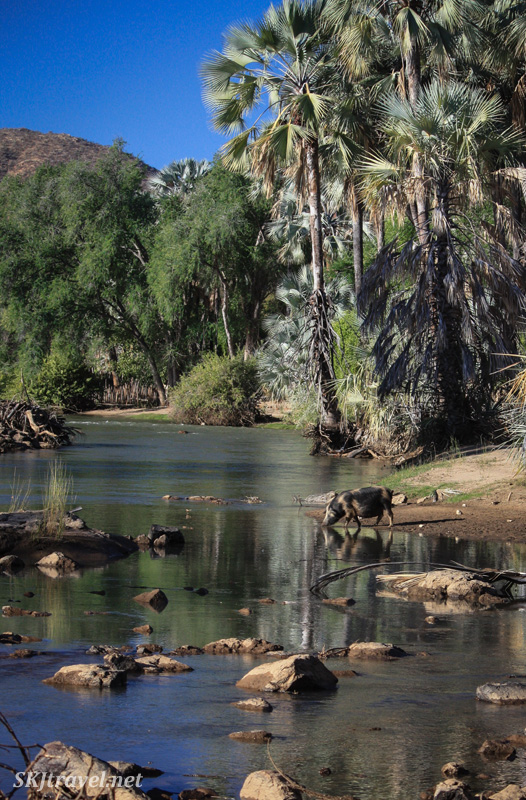 (2) A rather unkempt Shara belonging to nobody in particular, nowhere in particular. A wandering soul … some tell me they think I am lost – a lost soul. But look … here I am, right here! 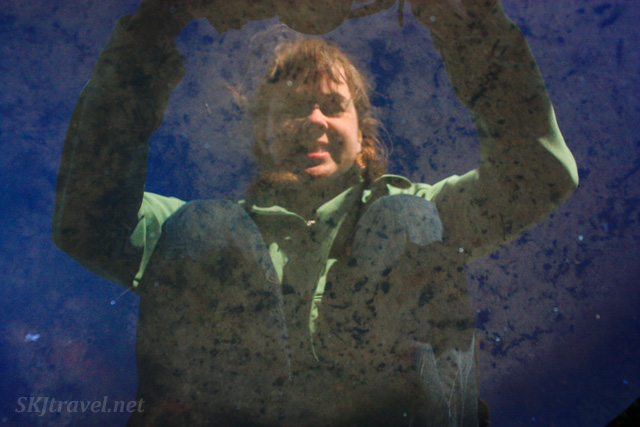