The End of an Amazing Journey Through Iran

And so at last, my dear readers, we have come to the end of our unique and amazing experience through an ancient, beautiful and hospitable land. A few last pics for you. First of all, the Imam Square, formerly known, of course, as the King's Square before the revolution. This public square, they say, is second in size only to China's Tianenmen Square (Beijing). As the second-largest public square, it is now used largely by picnickers, for arts and crafts festivals, concerts, and other public events. It is surrounded by the bazaar and Imam mosque and Imam palace. In the old days of kings, when Isfahan was their capital, this square was used to play polo. You can still see the stone goal posts standing near the ends. The king looked out from his balcony to watch the sport below. (Undoubtedly drinking the finest wine from Shiraz ... :) Yes, in case you've wondered, before the strictures of Islam outlawed alcohol, Shiraz, Iran, was the city in which Shiraz wine was "invented," refined and renowned.) 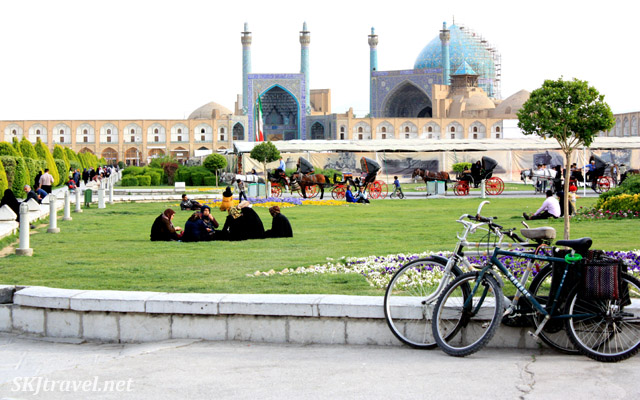 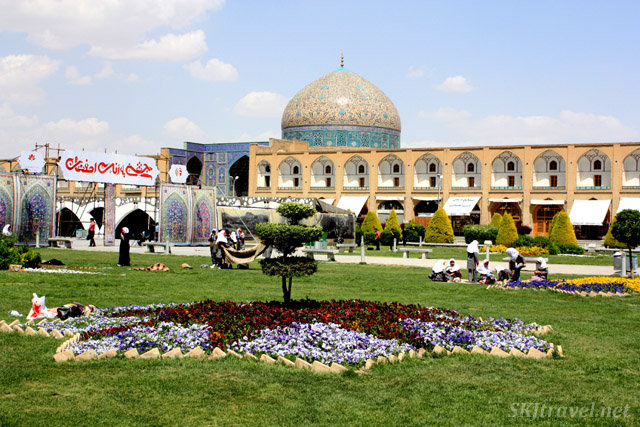 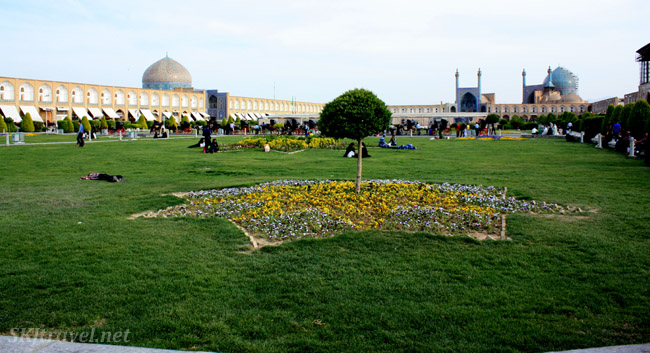 Now the Imam square is still full of horses, but they merely take visitors for rides around the square in carriages. And if cars drive terrifyingly fast on the roads, the horse cart drivers spur their horses on with similar maniacal zest and disregard for the pedestrians. I laugh to imagine a horse-drawn carriage moving at that speed through the pedestrian malls in Colorado, or even through the market square in Krakow or Italian plazas. The horses stick to the cement paths around the outer edge and the picnickers to the grassy interior where colorful flowers accent the lawn. 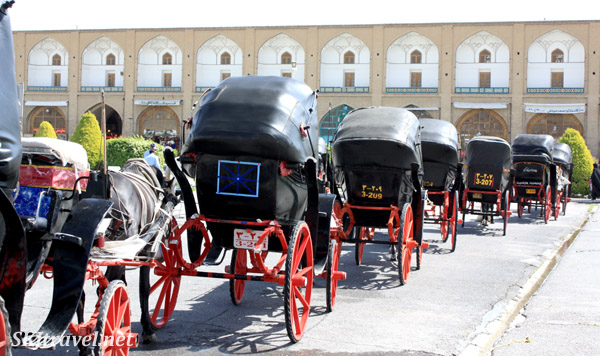 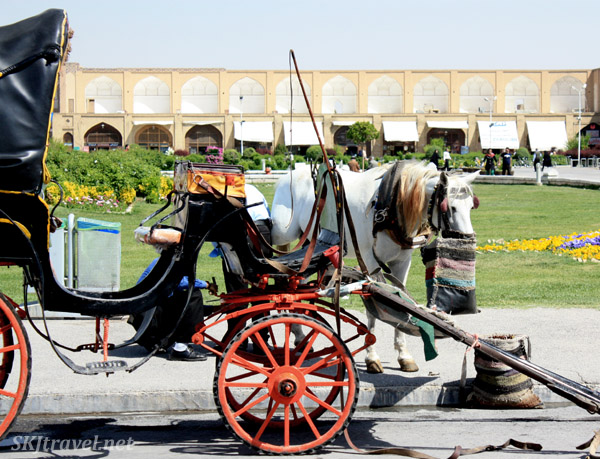 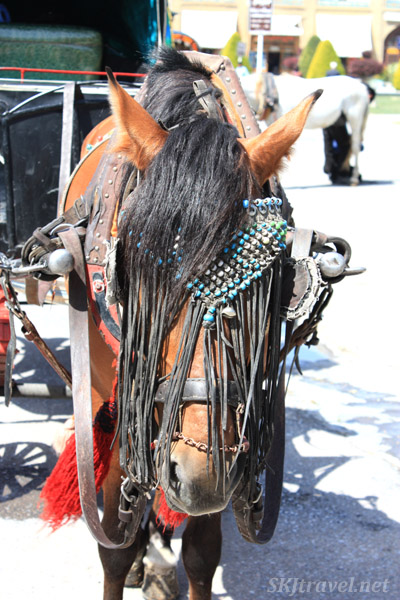 I had asked Reza if we could have a picnic one night. So on our last one in Isfahan, we hooked up with Arash, his best friend we met in Kerman, and Mohammad, his friend we met in Shiraz and along the highway. Let me now illustrate for you the Iranian dedication to tea and picnic: Reza and Mohammad had determined through phone conversations that they would be passing each other on the highway at a certain point, heading in opposite directions. So they set up a meeting point and time calculated on their relative traveling speeds. We pulled off the highway and soon Mohammad's car crossed the highway and came over to park behind ours. Reza got out, opened the trunk of our car to produce a thermos of hot tea, cups, and some snacks. They stood there and had a sort of picnic on the side of the highway. One of the funnier scenes I’ve witness while traveling was when we parted ways, in a gesture of familiarity, Mohammad started to give Erik the same traditional farewell as he gave Reza, as most friends do, which was three kisses on the cheek. Reza told Erik he was supposed to return the kisses on Mohammad's cheek. It's not like this is the only place in the world men embrace each other this way, but fortunately we don't live in any of those places because I don’t know if I’ve ever seen Erik squirm in his boots like he did when he had to kiss a man he barely knew. This is true and lasting humor to me.

Anyway ... back to the picnic in the square ... we bought the typical picnic fare and, along with a family of Spanish tourists who were currently in Arash's care, we had a little picnic. A selfie composed and executed by Mohammad: 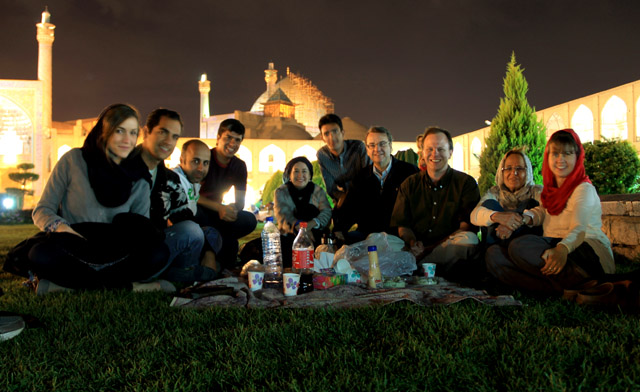 One afternoon we drove to the outskirts of the city to see some very ancient ruins, Atashgah, perched high on a hilltop. It's also known as the Marbin fortress. Following us up were a Saudi Arabian couple, the woman dressed in full black chador and dainty pink tennis shoe-esque footwear (note "-esque"). She seemed to have no problem climbing up. She hesitantly admired the view from the top. But when it came time to walk back down, fear overwhelmed her. Her face drained of blood and she went white as a sheet. It hadn't occurred to her she must walk back down the same steep slope. As I started to scamper down, she said to me, "You are so brave!" I tried to give her some encouragement, but she was so scared holding her husband's hand, it was clear she needed more help than that, and Reza stepped up to bat, taking her other hand. To me, the most amusing part of the scene was that, even though she was grateful, being from a country with far more strict and draconian codes of Islamic conduct, she couldn't bring herself even in a time of need to hold a strange man's hand. She pulled her sleeve down over her hand in order to grasp Reza's with a fabric barrier between their skin. The whole way down as the two men walked beside her she prayed out loud in a chanting prayer. Poor thing was truly frightened to death. Near the bottom, the slope relaxed and Reza left her to catch up to us. At the very bottom we stopped to talk amongst our three selves, and the Saudi lady and her husband arrived as well. She thanked us from her heart and then had her husband take a photo of her with us. The next night we ran into the couple in the square in Isfahan and waved at each other. Just one of those little episodes that will stick in my mind. 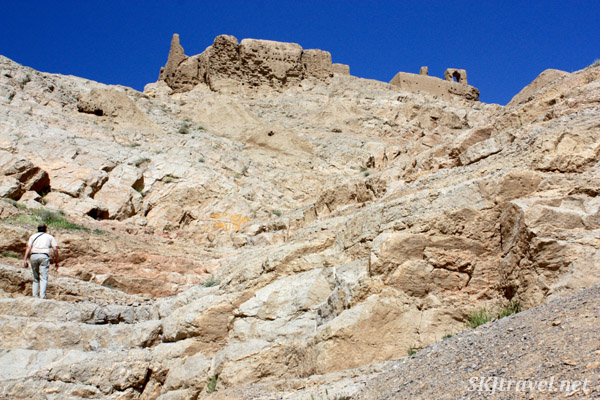 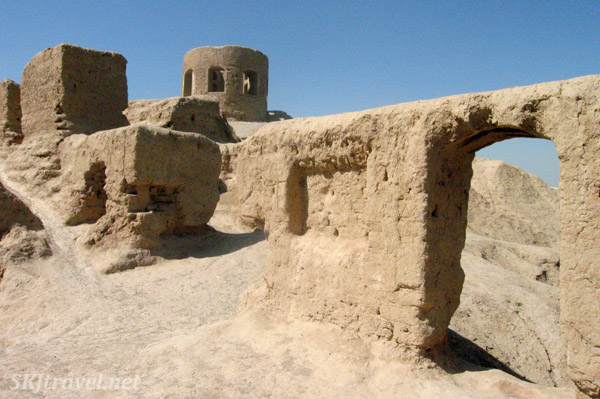 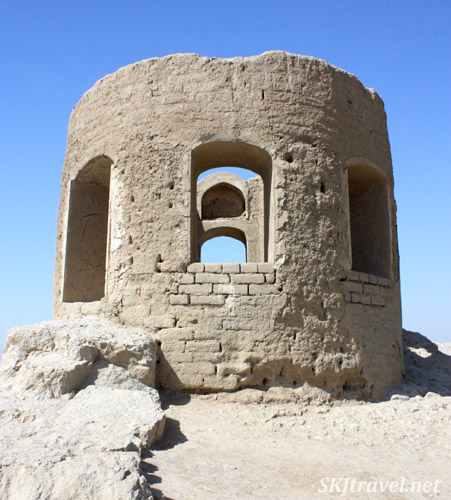 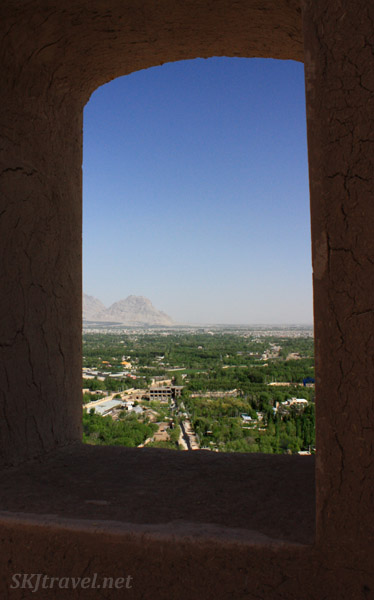 I will leave you now with one of the more beautiful and interesting places we visited, but probably the most unexpected ... a Christian church. This was inside the Armenian Quarter of Isfahan, known as Jolfa, where Armenian refugees from the Turkish genocide early in the 20th century have resided in relative peace. If you were part of a Christian community before the 1979 revolution, you were/are allowed to remain so. The interior of the Vank cathedral is covered in lush, vibrant paintings. The architecture is an interesting mix of traditional Islamic and Christian. 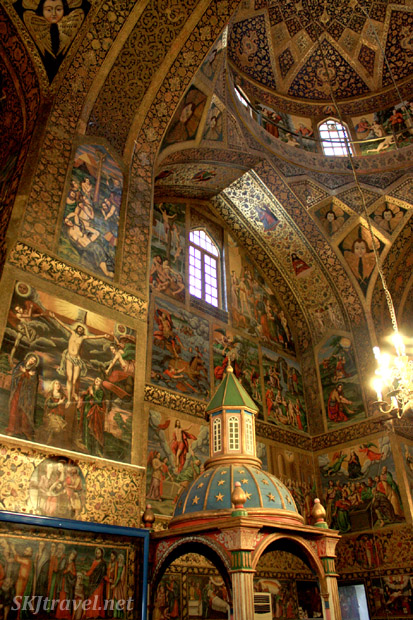 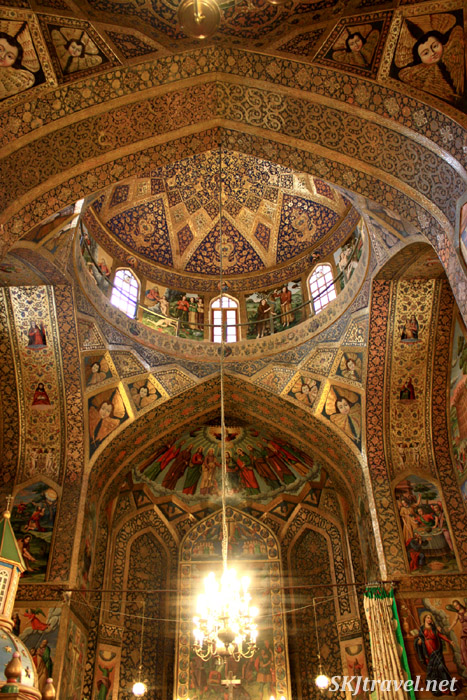 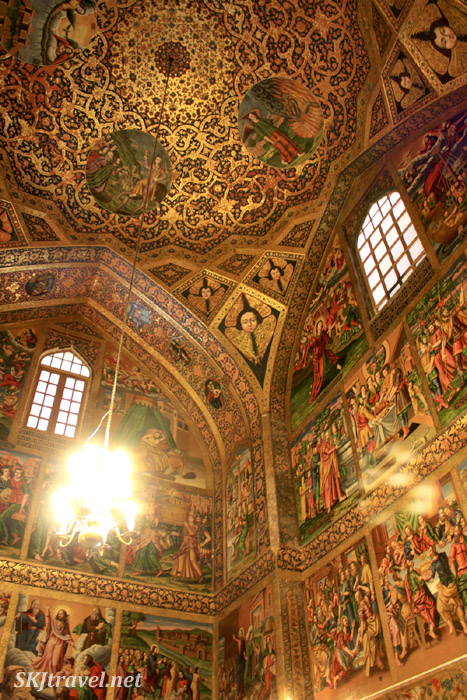 The ex-pat we met several times at the coffee shop in Isfahan said he likes to attend church service here. I think the reason why he attends is hilarious, yet after having lived in America for 40 years, I can see his point of view: he goes so that he can see women's bare heads ... their hair and neck. It must feel weird to come back to your native country after all that time and, as a single man, never see these natural features of women he has seen every day for 40 years. 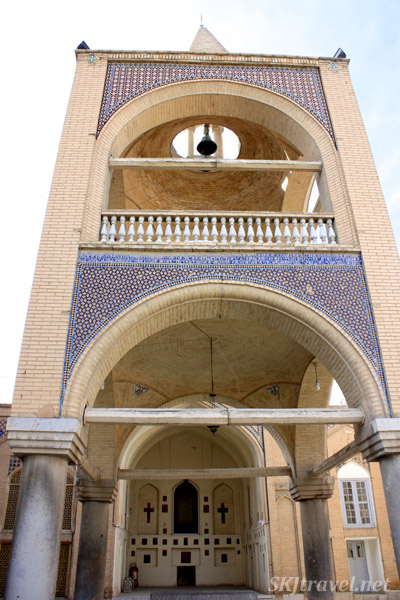 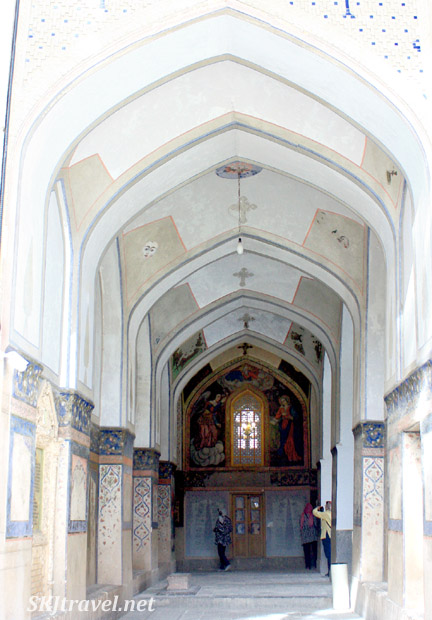 As part of the church complex there is a museum about the Armenian genocide. Something I didn't really know about. There were some really graphic photographs of dead bodies in one of the first exhibits, and school kids were nonchalantly passing by. Kind of weird. But some interesting artifacts were on display, items the refugees brought with them from their churches and homes in Turkey. 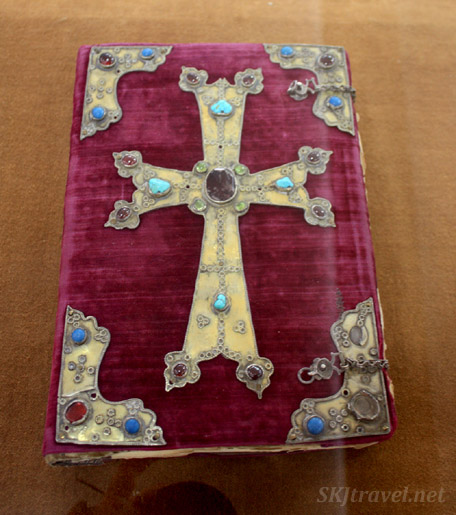 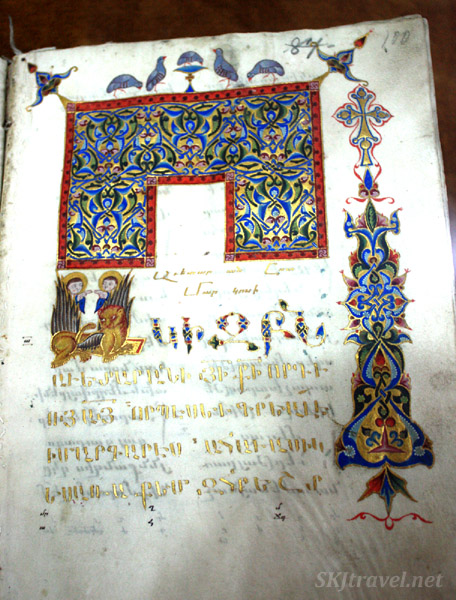 We came home with boatloads of souvenirs. We came home from Iceland with a rock and a magnet, and a postcard picture of the latest volcano eruption ... we couldn't afford anything else! Similarly, from Barcelona, only a Dali tee-shirt and a Gaudi tea cup ... too pricey. But our luggage was laden on the way home from Iran with all kind of signature crafts including a Persian carpet! (pretty much the smallest, cheapest one the dealer had, but it's still pretty cool) Everything was quite affordable. We even bought some decorative tiles ... we knew that sometime this year we needed to replace/re-tile our steam shower and bathroom. Which we did this summer with some lovely Persian tiles to display. This is the tile shop with the modest kiln from which we bought them. 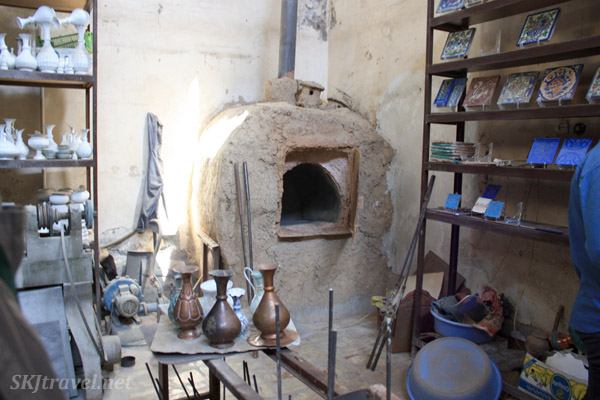 If you want to travel to Iran now that you've seen how awesome it is, be sure to contact me (with the blue contact button above) for information on how to contact our guide, as I would love to recommend our guide and friend, Reza, to anybody. A couple books I read about Iran which I would recommend to anyone with an interest: The Cypress Tree by Kamin Mohammadi, a nonfiction book about a family displaced by the 1979 revolution ... very interesting first hand perspective of these tumultuous events. Censoring an Iranian Love Story by Shahriar Mandanipour, a fiction novel which also provides heaps of cultural insight into Iranian society. Hope you have enjoyed your vicarious journey with me through Iran.