Yazd 1: Caravansary in the Desert. Plus Eat Sweets, Knock on Doors and Watch Zoorkhaneh

Now we journey on to the city of Yazd, an ancient city that can trace its origins back thousands of years.  Roadside scenery: 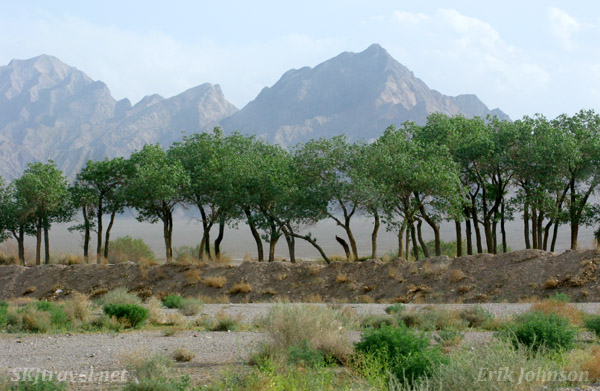 We stopped in the middle of our road trip for tea (surprise!) at a caravansary. I must admit that I only recently became acquainted with this word from extensive playing of the game Seven Wonders (nod to the in-laws). But they are common throughout Iran -- places where caravans traveling long-distance trade routes could stop for the night or to trade, and find food and accommodation. Some of these are restored and currently used as hotels with the traditional “rooms” simply separated from the main corridor by a curtain, or as tea houses. 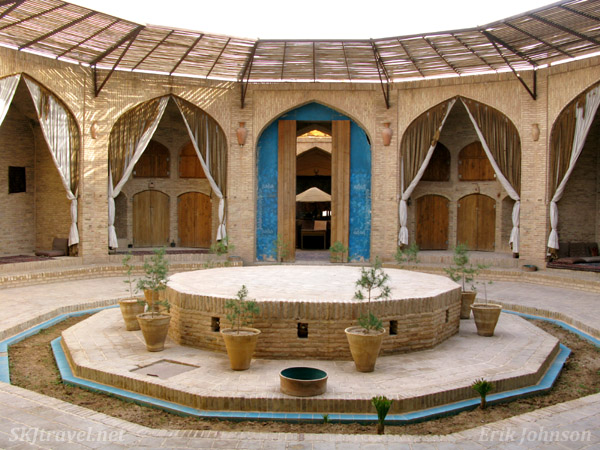 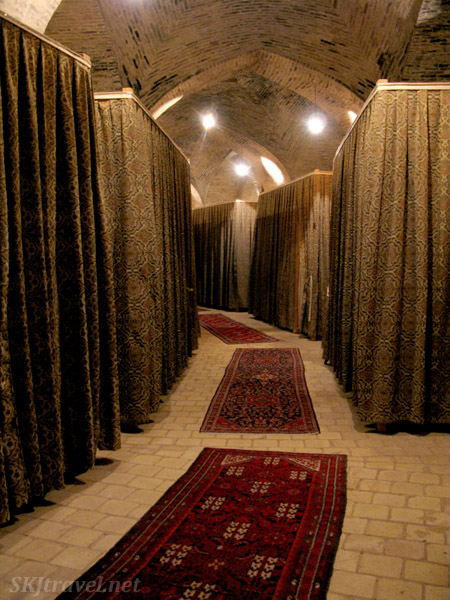 The rooftops are designed for seating in the summer evenings. Me and the boys took a self-timer on top. Erik asked why I was taking a photo looking out at the bleak plain, but that’s precisely why I took it:  to get a sense of that bleak plain stretching on past the horizon. Imagine being in a caravan with only that barren land ahead of you, getting up in the morning to plod on across it to the next stop. 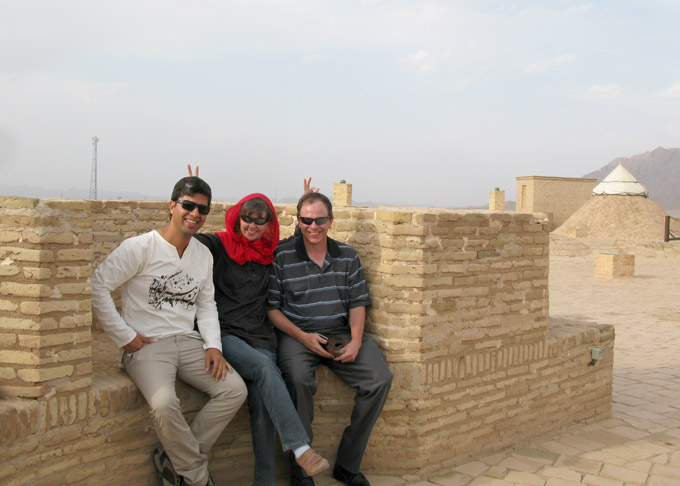 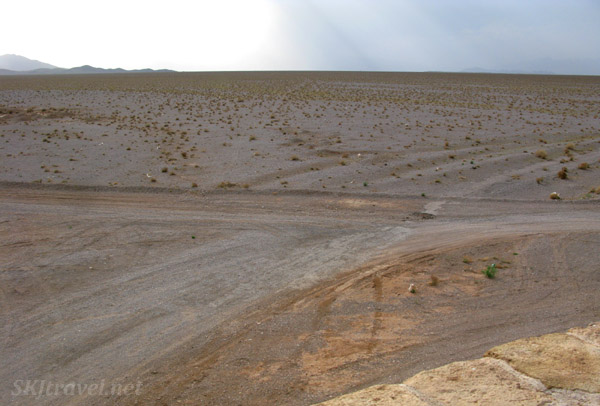 Erik looks up toward the rooftop and sees me; I look down from the rooftop and see Erik and Reza. And then there is me asking admission at the front door … a safe precaution not to let the likes of me tramp on in without checking me out in the mini door first. 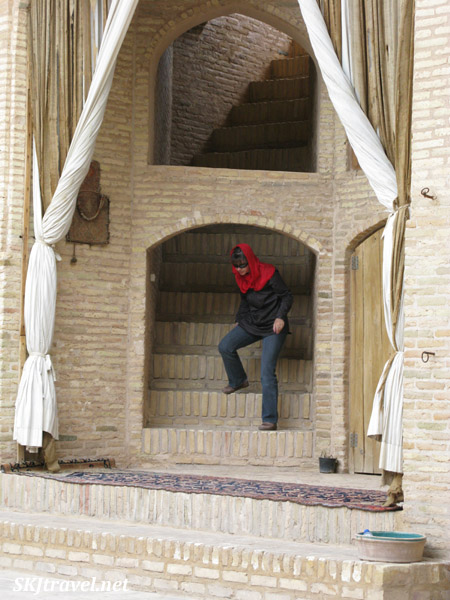 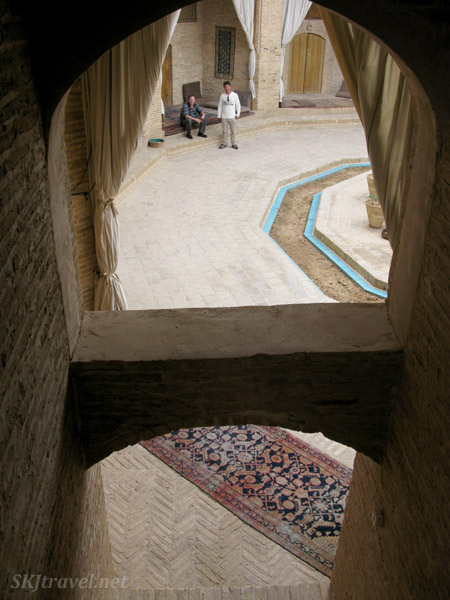 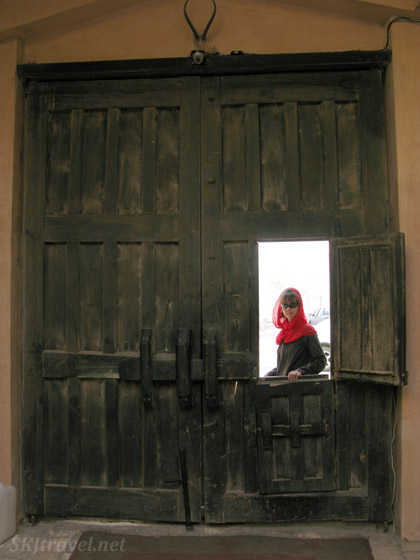 Many other caravansaries can be spotted as ruins along the highway. I adore countries with deep histories in which ancient ruins lie with such casual abandon in random places.

Just over the hills at the foot of the mountains behind the endless stretching plain, if you can believe it (I was surprised) lies a cheetah reserve and conservation program. I hadn’t realized that cheetahs were once native to Iran. The government now has a program that provides insurance to the local farmers/shepherds so that if a cheetah takes a goat or sheep or even many sheep, the farmer will be paid for that loss by the insurance. Or if he is injured by a cheetah his medical bills are paid by insurance. All of this is so farmers/shepherds have no financial incentive to shoot or kill cheetahs. According to Reza, the program is making an impact on preserving the cheetah population.

Our hotel in Yazd is an old palace of some wealthy dude which has been converted into a hotel. This is all the rage in Iran right now, it seems, as tourism picks up and they find themselves short of accommodations … old palaces, caravansaries, etc., rather than left to ruin or turn into a museum, they convert to hotels. In this one, the main courtyard is where the food is served in a dining room, and private rooms are just directly off the courtyard, so that if your windows didn’t have curtains, you’d look right out onto the courtyard. A friend I made through couchsurfing, Rasool, came and met us for dinner. He was invaluable to me before leaving for Iran, providing lots of helpful information both with and without my solicitation. We exchanged gifts and had a lovely evening together. Sadly, we forgot to take a photo of us together. But we have plenty of me, Erik and Reza as a threesome. This one was my idea to take in the mirror, but Erik and Reza tried it too (I think it's funny we all have our cameras out); Erik's came out the best. 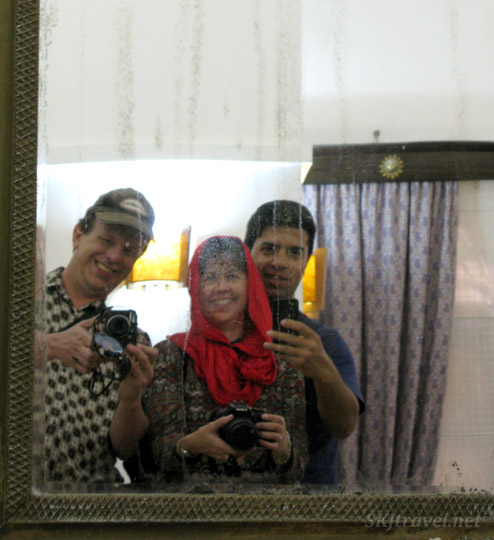 So … off to explore Yazd. Another mosque, for one thing, the Friday Mosque dating from the 14th century. Relatively small but beautiful as always. One thing Reza pointed out to us here was the little corridor where women could talk to the Imam (leader of the mosque). Because men and women who are strangers are not supposed to be near each other alone, according to Islamic custom, the women had to seclude themselves behind a wall in the corridor. You can see Erik standing out in the main area where the Imam would lead prayers and preach, and I’m in the corridor. 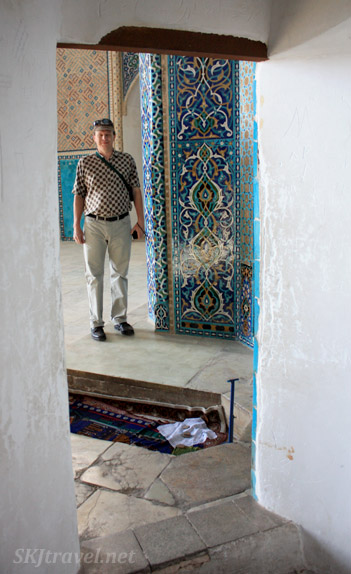 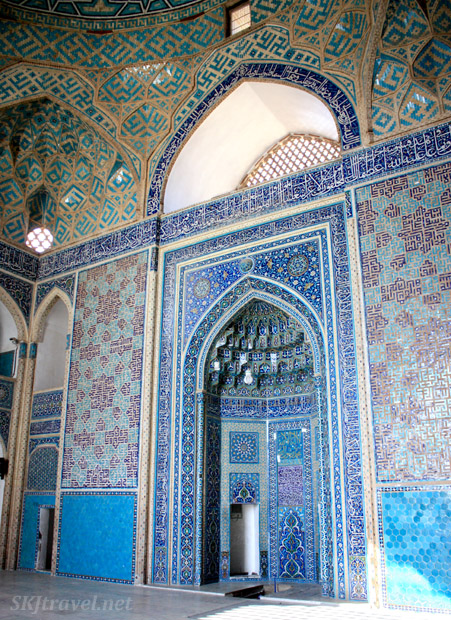 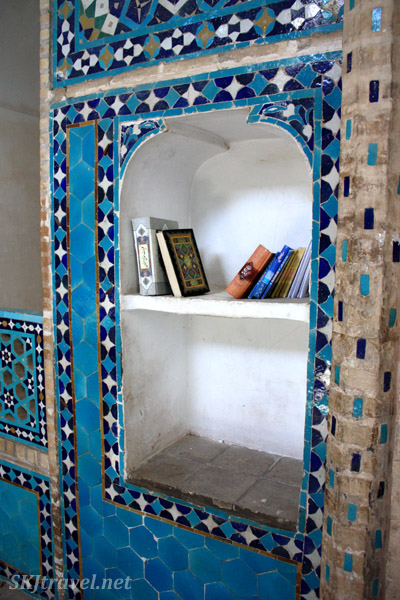 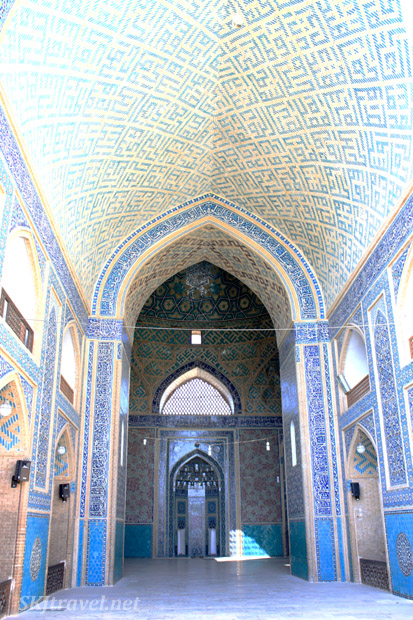 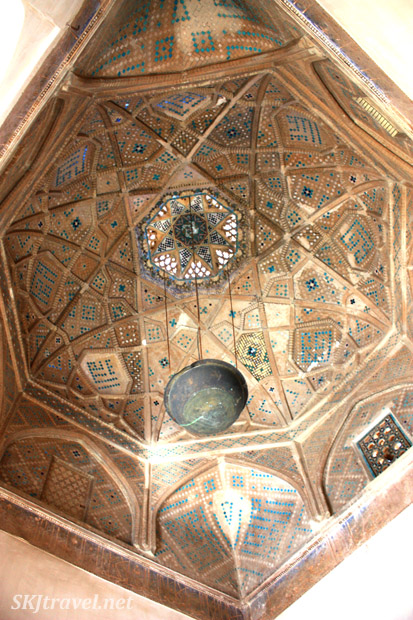 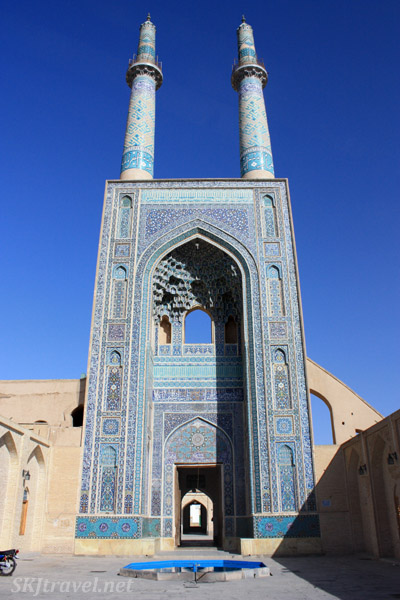 Here is a typical city street scene in Iran, with a dazzling mosque poking into the sky with its blue minarets, squished in among a sidewalk full of stores and stalls. The only thing odd about this photo is the freakishly empty street. There are no cars besides the parked ones and just the one motorcycle nosing in on the side. I have no idea how I caught this scene ... knowing how crowded the streets usually are, it seems like an eerie ghost town. 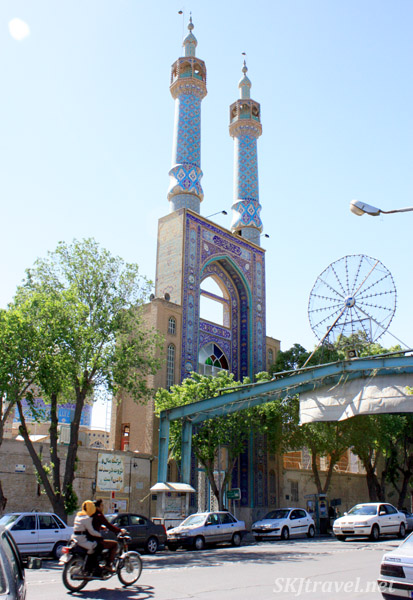 The old town bazaar in Yazd has very ancient roots and has spread out over the centuries. There are lots and lots of alleyways, and without Reza, Erik and I would definitely have been lost. Even Reza leaked a smidgeon of doubt about where we were sometimes. Here, Reza pointed out to us the older traditional doors of residences throughout the alleys. These doors have two different knockers on them, one on each side. Can you guess what they are for? Reza asked us to guess and neither of us pegged it. 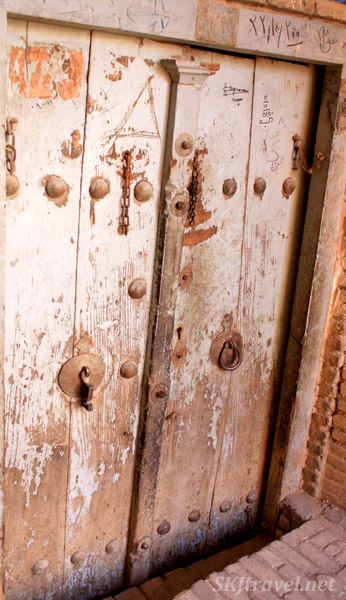 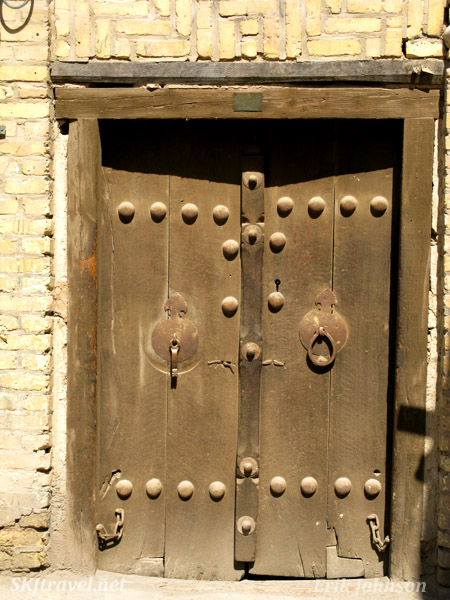 … One is for women (the round one) and one is for men (the straight one). Essentially the universal symbols of male and female, no? The two knockers make a very different sound from one another. So in traditional households (which once upon a time used to be all of them), the people inside knew by the sound which sex was calling, and women answered the door for women visitors, and men answered it for men. The glory of extreme segregation of the sexes. It’s so hard for me to imagine this lifestyle. Perhaps the door below belongs to infidels!! Oh my, the scandal! 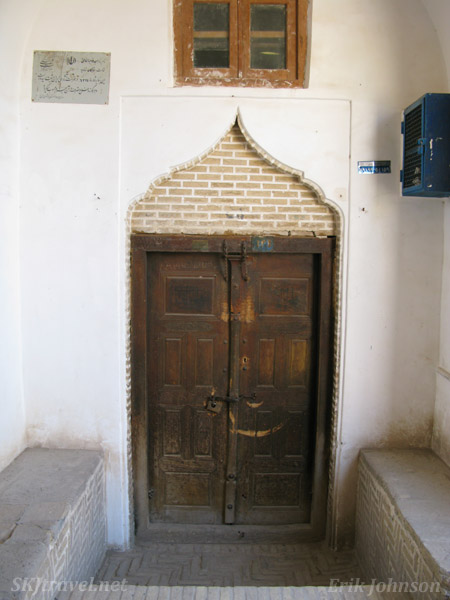 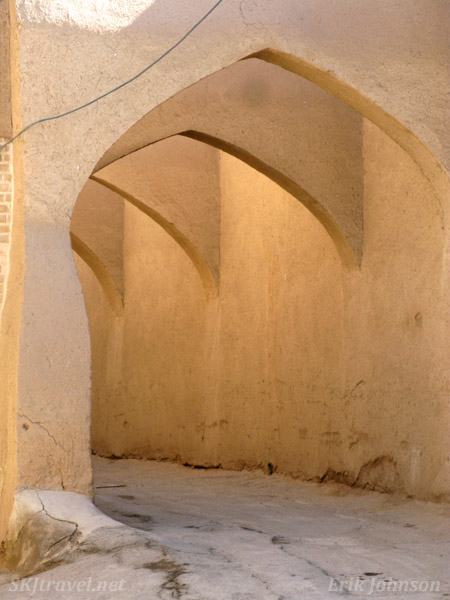 That night we watched exercises called zoorkhaneh. There are probably more interesting things to watch than men exercising, but it is a unique type of training worth seeing. My favorite part, though, was the music – a guy impressively drumming a bodhran with his hand and singing in a loft above the exercise floor, and frankly he probably got more of a workout than the exercisers, he was the only one sweating up a storm, singing inspirational songs of historic heros. Anyway, the zoorkhaneh is the ancient training for sword fighting. So they practice with extremely heavy things like bowling pins (I tried to pick one up) in movements like you would employ to wield a sword with, and they twirl some other metal things, spin themselves around in a lot of circles, and lie on the floor and lift wooden shields up and down like weights. 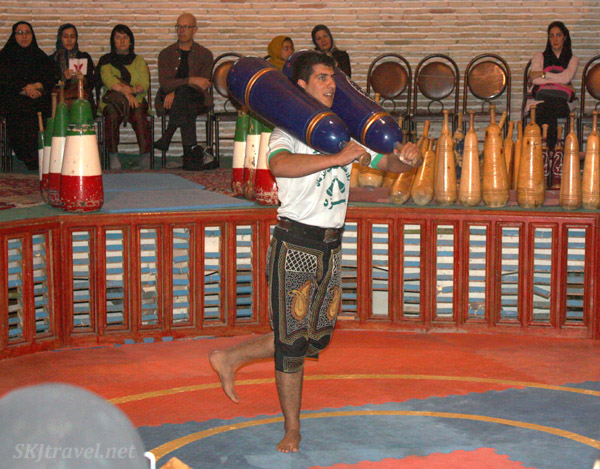 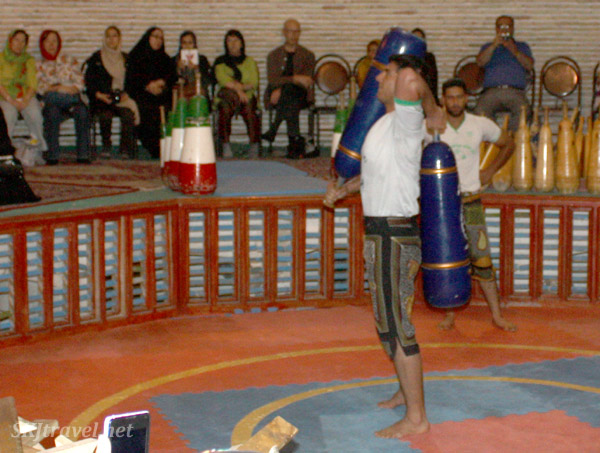 That night we visited the main Yazd square and bought some sweets, a particular type that Yazd is famous for. Many cities have their own particular food they are especially known for. 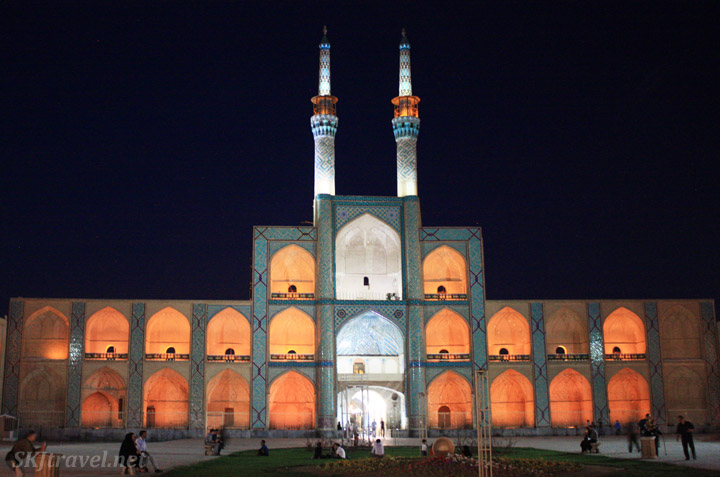 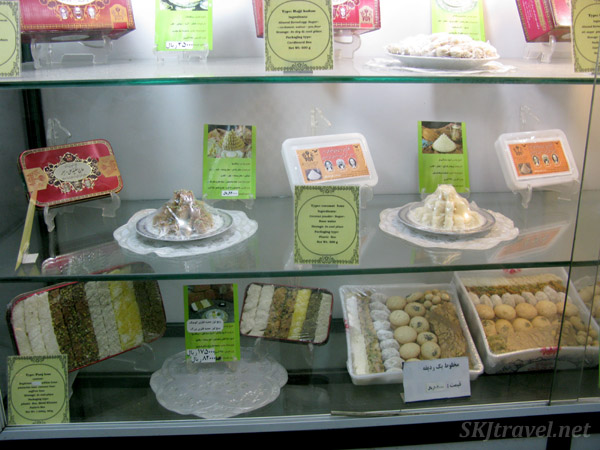 Another customer in the candy shop struck up conversation with us; he was very pleased to know we were American, and he told us to tell Obama to like Iranians. Time and again we talked with people who don’t understand American animosity toward them and wish it would cease.  After talking with us for a little while, he said goodbye and shook Reza’s hand, then Erik’s hand, then he looked at me anxiously and said he would shake my hand if it weren’t for Islamic custom (wherein unrelated men and women don’t shake or touch each other). I shook many men’s hands of the younger generations who don’t believe in that, particularly with foreigners. But the older folks who follow the more strict and traditional customs refrain. I could tell he was actually dying to shake my hand, and he very nearly did, but withdrew it at the last minute. Perhaps he was afraid other people in the store would see this brazen act of bravery and chide him for it.

The last thing I’ll point out about Yazd in this post are the city walls – one of the best standing examples of traditional  Persian military architecture. “The city walls of Yazd have traditionally been the last shelter of threatened and eventually displaced Persian imperial dynasties. It was one of the last bastions to hold out against the Islamic, Seljuk, Mongol, Timurid, Safavid and Afghan invasions of Iran over the past millennium.” (from Payvand Iran News) It is unquestionably the city with the most interesting skyline when viewed from any of the copious rooftop courtyards, full of mud-and-straw domes, towers, walls, and wind catchers (which I’ll show you in the next post). And so to bed with our cheeks full of Yazd sweets. :) 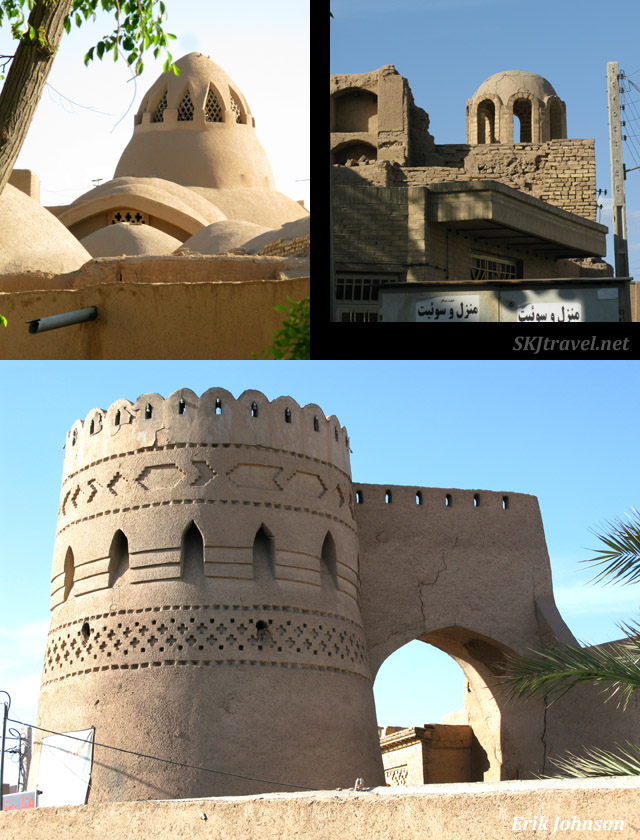