It’s not really correct to say I “woke up early” because I’d been awake since my watch said 3:15 a.m. unable to convince body to go back to sleep on the hard ground. But around 6 or 6:30, Erik got up to pee and I had no reason to keep lying on the ground now that it was light, so I got up and dressed and I figured I would either walk around or maybe write some. But I noticed Erik standing up at the nomads’ sheep pen looking inside so I walked over to him. The man was preparing the sheep and goats in their night pen to be let out so he could walk them out to pasture. He and his spinster daughter were milking some sheep. The man had a hooked stick, he would walk around the pen and grab a sheep by the leg with the stick to single it out then hold it still while the daughter milked. Then he separated the baby goats and sheep who wouldn’t be able to keep up with the herd. One baby goat was sick and needed a shot of penicillin (that word we understood from the old man). I held the baby while the man first stuck in a shot with a bent syringe that didn’t work, and so he had to go get a new syringe. I could feel the little nubs where the goat’s horns would come in while I held him still and petted him. So cute.

The man left to go walk to the mountain and back with his herd. Mr. Qajar had brought him a knee brace and a walking cane. I imagine that when he called, he asked what gifts the family would like in exchange for hosting us. The man was super pleased with the brace and cane.

Dogs clearly don’t usually get human attention in a good way. Erik and I tried to give some to two dogs that seemed to belong to the family camped on the other side of us. They wanted desperately to be petted but were extremely caution, approaching us obsequiously, crawling on their bellies toward us. But once I proved myself a copious source of scritching, the cream-colored dog and I were best friends, and she rolled over to have her belly scratched, licking me in joy. 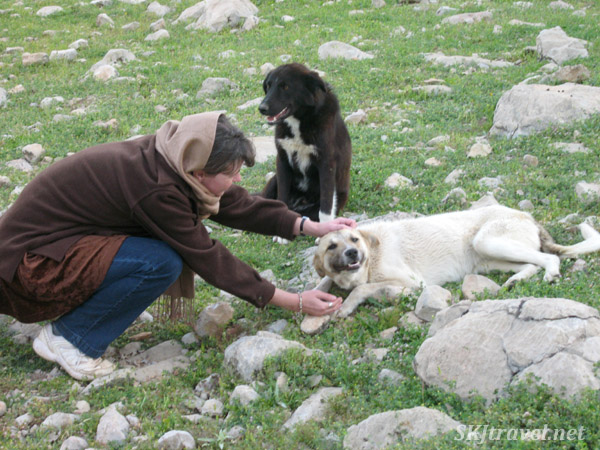 Farshad made omelets for us for breakfast. My favorite. The nomads brought us the fresh sheep’s milk Erik and I had watched them collect and Farshad boiled it for us to drink. Not my favorite.

So it was a short visit with these traditional tribal people, but enough to get a flavor of their ancient existence. It used to be that nomads made money making carpets from the wool of their sheep, but it’s not such a lucrative business anymore. Their wanderings are not so nomadic as they used to be, traveling only between two places now. And this year they transported their sheep from one camp to the other with a truck rather than walking them by foot. So times change inexorably. They are the modern nomad. But even they will cease to exist before too long.

Near the nomad camp beside a river is an ancient ruin called Bishapour. The Persians defeated the Romans in battle here and they used the Roman soldiers they captured to build the city. There are several reliefs carved into the steep rock walls beside the river to let everyone approaching the city through the valley know that this king had defeated the Romans. We are steadily introduced to many common motifs in the stonework and tilework around Iran coming from different dynastic periods. One of these is the Persian king when triumphant steps on the body of his defeated foe. (this becomes relevant in our own lives in a few days …) And a ruler holding a ring out in front of him symbolizes pledge and promise either to gods to rule his subjects honorably or with another ruler in peaceful gesture. 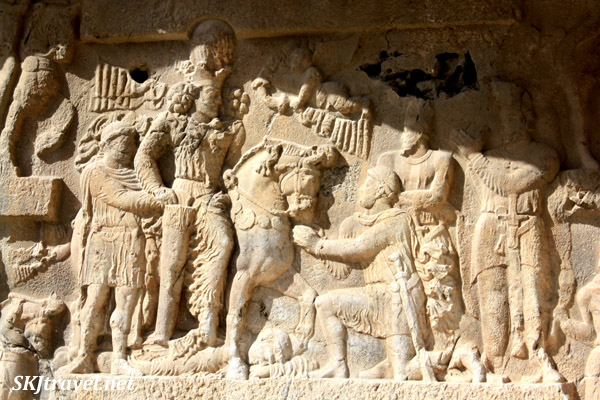 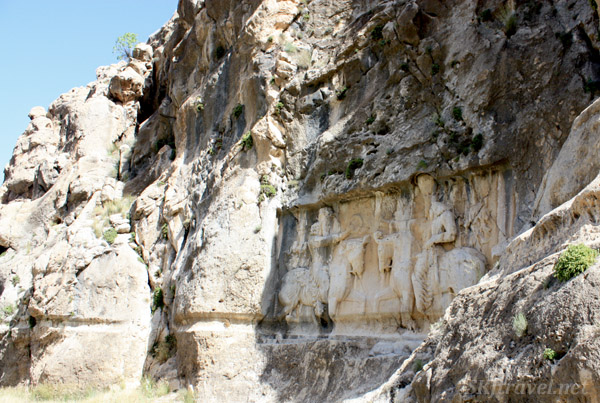 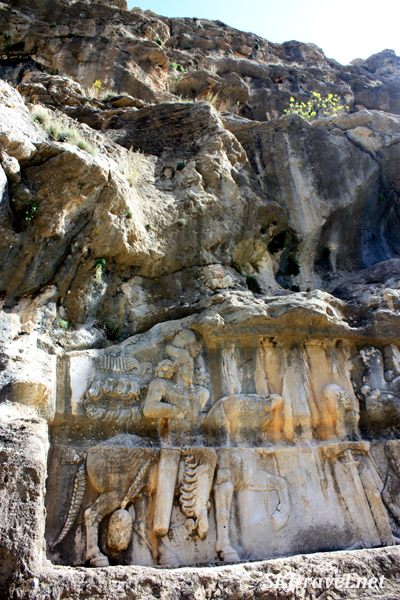 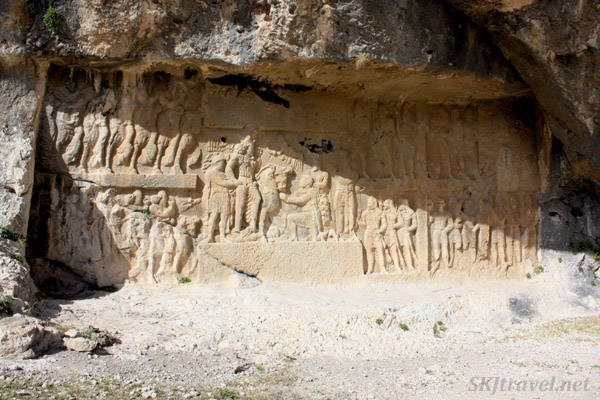 Bishapour was built mostly with the labor of Roman soldiers captured during the battle. A watchtower dominates the hilltop at the mouth of the narrow valley where it opens up onto the plain where Bishapour is built. Reza mentioned that highly defensible structures such as a fortress are often named “virgin” castles, bridges, etc., (e.g. The Virgin Fortress) reflecting a culture of familial over-protection of women and how difficult it is for a single man to get to a single woman.

There isn't much left of Bishapour and excavation is slow, with funds allowing only a couple months each summer. But it was nicely preserved in the sacred temple area and there is always something vaguely romantic about a rubble ruin on a wide open windswept plain. 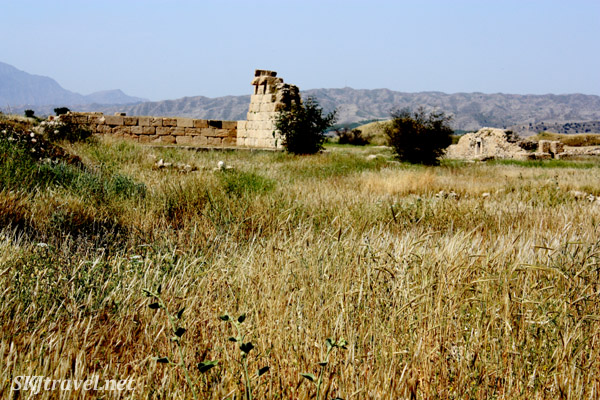 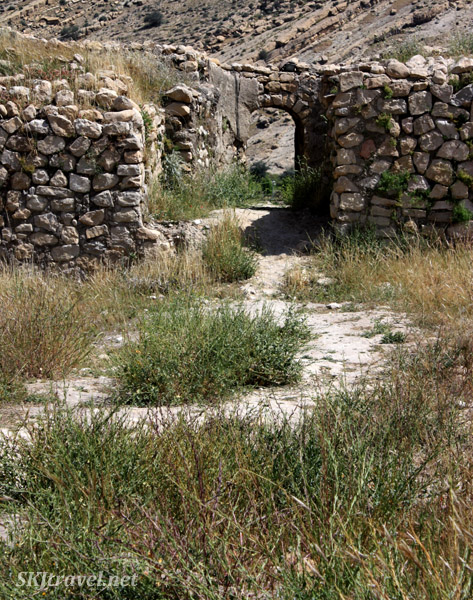 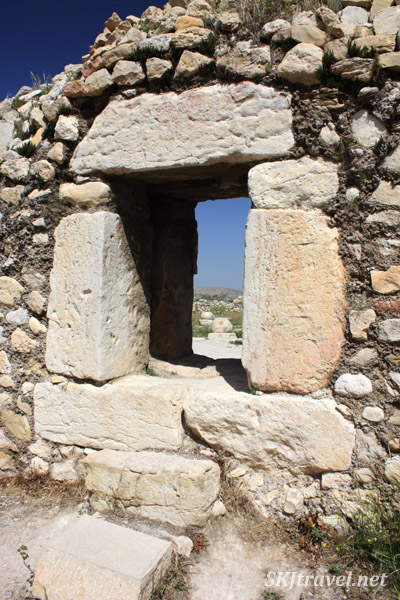 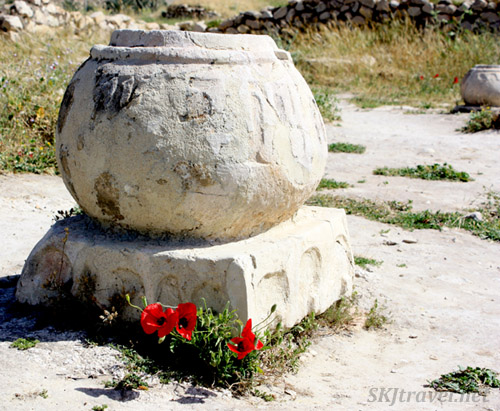 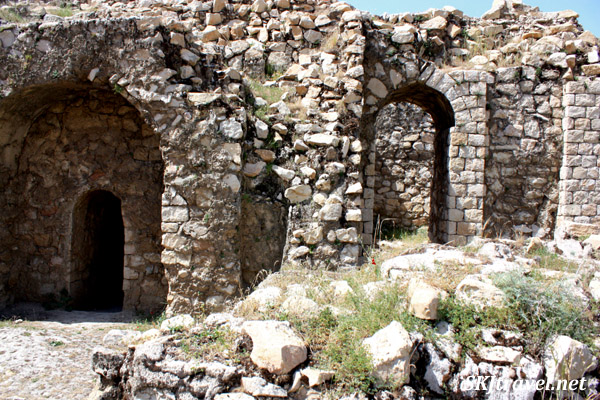 The reflecting pool inside the temple was made with extraordinary pains to ensure the water entered the pool (via an underground channel dug to the river 250 meters away) with steady and gentle stream so as not to disturb the calm, glassy surface which was supposed to reflect the bull head stone carvings looming over the pool. The water was blessed once a week in the reflecting pool and then channeled out to the crops and city. Below, the square depression is the reflection pool, the stairs are leading down into it, and the dark corridor is what you find when you enter one of the doorways surrounding the pool. 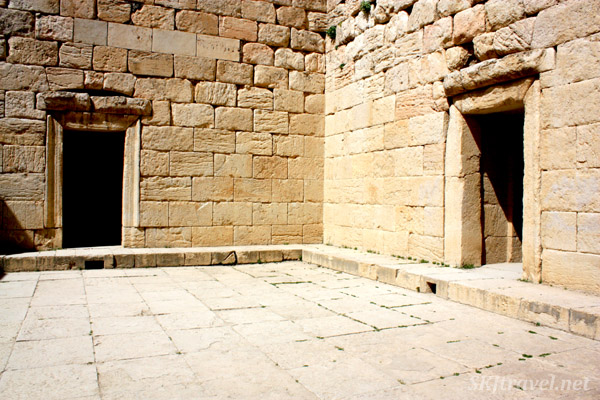 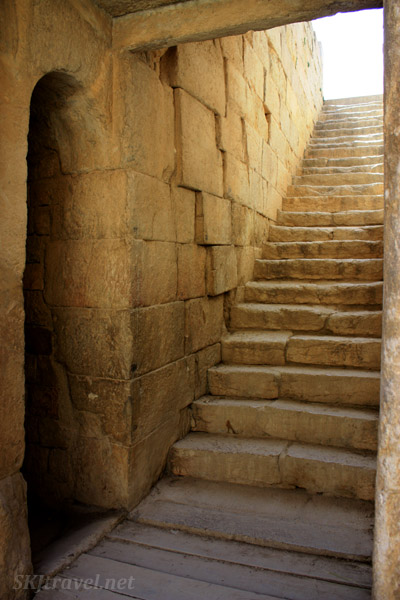 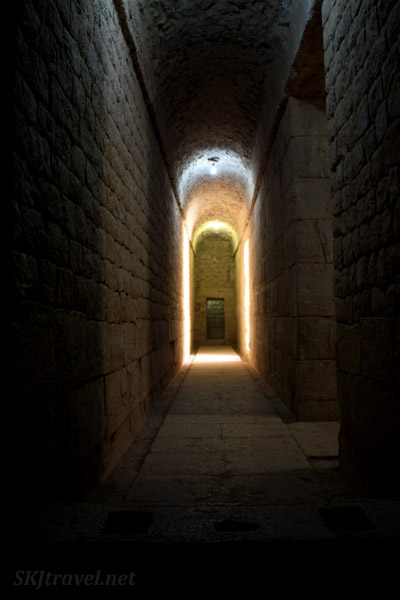 A man who worked at the ruins attached himself to us for awhile, explaining aspects of the ruins as we wandered through them. At one point, he shuffled his foot in the dirt, then bent down and brushed the dirt away from a patch of ground with his hand to reveal of a bit of rock mosaic flooring. After he told us about it, he brushed the dirt back over it and patted it down, and we walked on. A simple, small gesture that was strangely one of my favorite moments there ... it just makes you think -- you never know what ancient wonders you could be standing right on top of in a land with such ancient history.

After returning from the nomads and Bishapour to our hotel in Shiraz, we went out to dinner that night across town.  As we approached Reza’s car, he said to me, “There is a little something for you in the car.” I opened the door and there was a beautiful tiny box sitting on the back seat right in the middle. A birthday present from Reza! So sweet. When I saw the pretty box sitting there for me, I had to swallow a little tear – it was such a lovely gesture. Reza is going to be laughing as he reads that sentence. The gift itself was beautiful, but even if it had been ugly or weird, the gesture alone was a gift.

Some random notes: Huge herds of sheep are continually crossing the roads and highways. I’ve been in other countries where you occasionally have to wait for sheep crossing the road, but never so often and never for anywhere near so many sheep. Here they are even crossing 4-lane divided highways and causing very large traffic jams as shepherds lead their flocks casually around.

If we thought it was a bit of a hassle getting a visa to Iran, I retract any complaints about the time it took and the amount of paperwork. That’s nothing compared to the process an Iranian must go through to obtain a visa to America. You need to have a letter of recommendation and a financial sponsor in America, and worst of all, you must travel to an American embassy in another country and be interviewed in person! Most people go to Turkey or Dubai … but imagine having to travel, on your own expense, to another country to obtain a visa to the country you want to visit and must have an interview.

At police check points, all buses and trucks must stop and hand in a tracking device on their vehicle which tracks their maximum speed, average speed and number of hours on the road each day. If they have exceeded speed limit or driven for more than 8 hours in a day, they get a ticket. The driving time max is for their safety. Also, tour guides must stop at certain check points – they must submit their itinerary to the government and the police and must follow it exactly and at these check points they submit a type of tracking number to the police who make sure they are sticking to their itinerary.

Tomorrow the shining city of Shiraz awaits our eager eyes. I have so many photos from Shiraz ... here's one in preview. :) 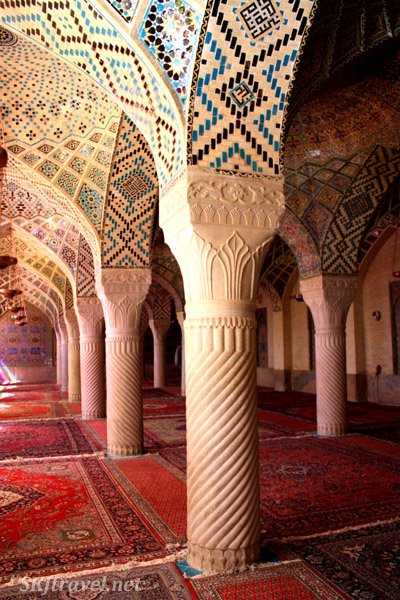