Castles and Cathedrals Cast Their Spell in Prague

I’m always a sucker for European castles and cathedrals. Prague Castle and St. Vitus cathedral didn’t disappoint. The heart of “old town” or “classic” Prague lies between the castle/cathedral complex and the Old Town Square, with the Charles Bridge spanning the river between the two of them. The castle, I suppose naturally, holds the high ground, overlooking the rest of Prague and the Old Town in the distance. Here is a little photo tour through the cathedral, the castle and its grounds, which are lovely to walk through and provide excellent overviews, plus a quirky little attraction rather at odds with the uber-classic nature of the rest of old town Prague’s architecture. Then we'll take a brief jaunt across the bridge.

From my temporary residence near Pohorelec, I could walk downhill to the castle, entering it through the main gate, and passing by this lovely lantern which I always wished I could have seen lit at night. At noon each day, a column of castle guards marched into work (I presume). Hi-ho hi-ho. There was a wonderful gypsy band that often played for tips in the large open courtyard in front of the castle, I spent probably a total of a couple hours listening to them and watching the crowds filter in and out of the castle, wondering what sorts of folks wandered in and out of the grounds in its heyday ... what the guards once looked like with lances and swords and horses to ride, what scenes of stench and horror surrounded the castle during times of plague and pestilence, what ragged bands of Renaissance musicians sounded like twittering their flutes and drums. 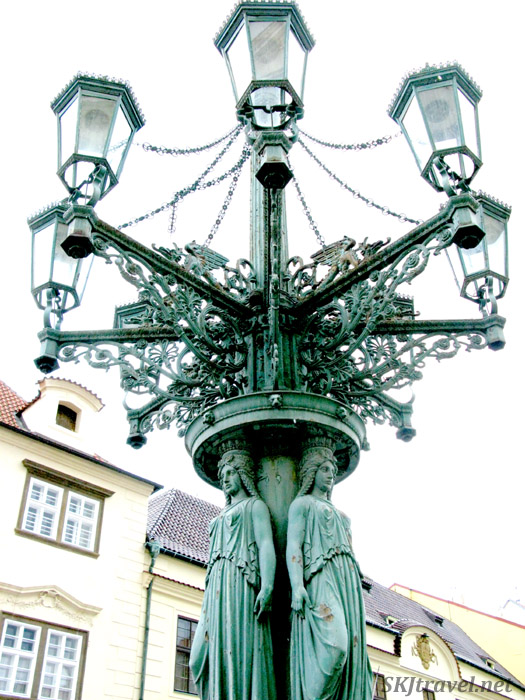 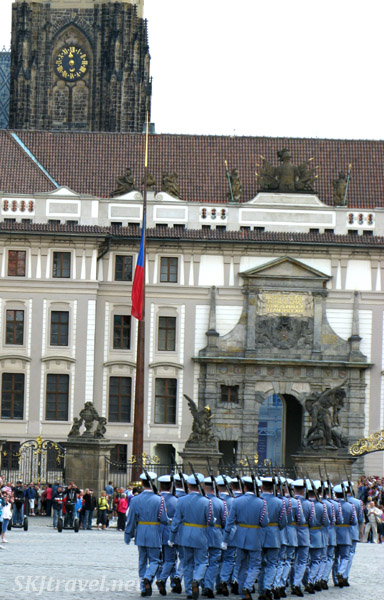 The inside of the castle was actually surprisingly spare ... not full of opulent furniture and wall/ceiling moldings. It seemed to exist in a very functional state ... an administrative center rather than a lavish palace. It was here that I rediscovered my love for the word "defenestration," when we learned of the history of this seemingly preferred method of deposition of unwanted court officials (that is to say, throwing them out a high window). 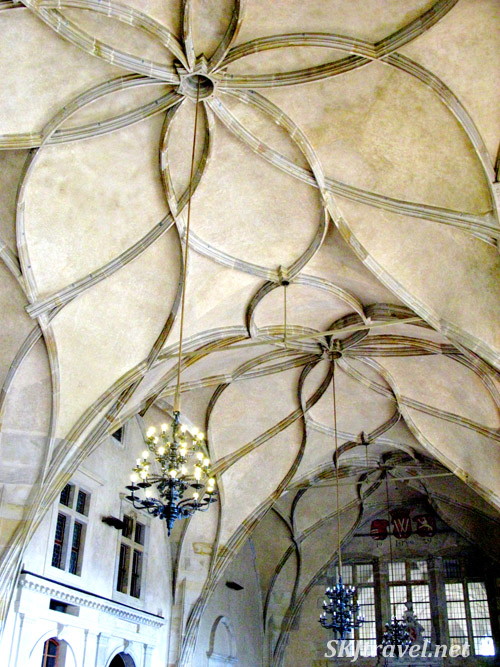 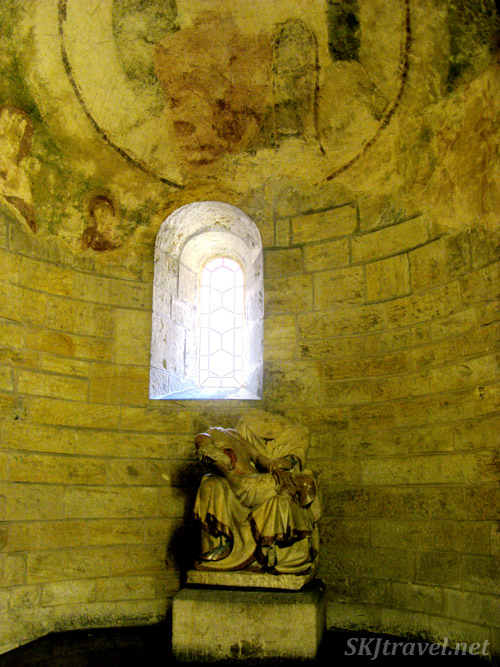 My favorite part of the castle was actually walking the grounds and gardens along the side, where you can look over the city ... over the minions, if you will ... over the serfs and subjects of this architectural grandeur. Well OK, only in the imaginative past, those serfs. Nonetheless, very pleasant. First photo, notice the friendly guard hanging out amongst the greenery. 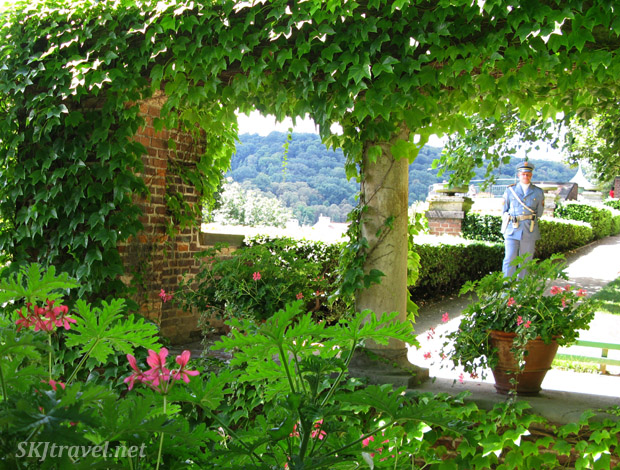 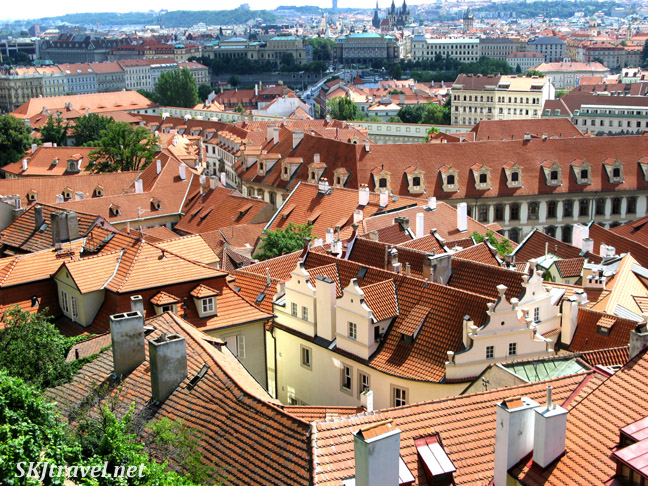 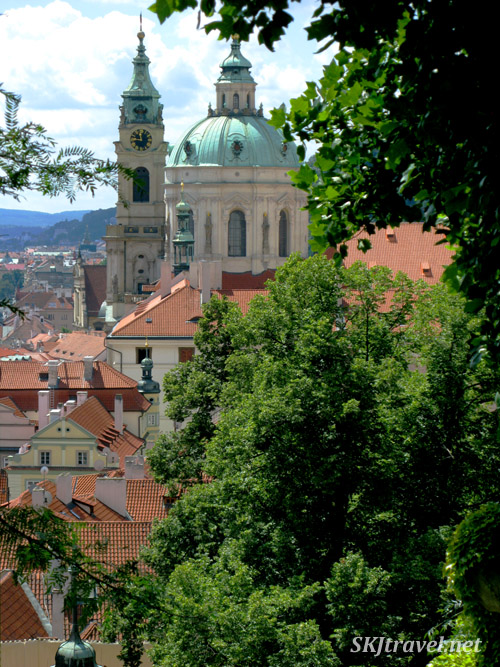 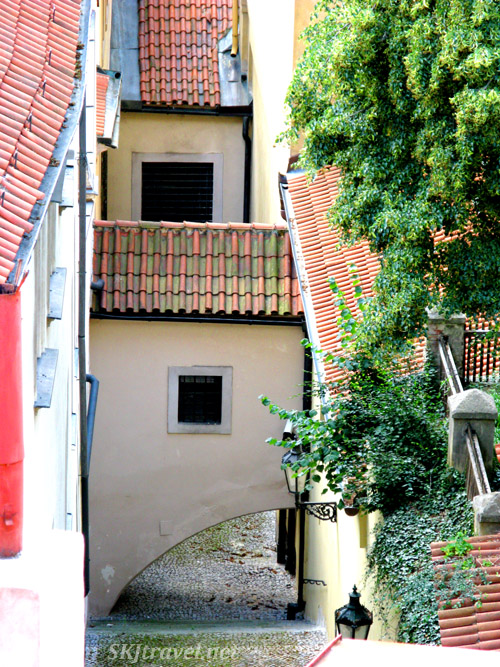 At one point, as you descend toward level ground near the river, you find yourself looking down into this rather odd space with dripping, organic-like shapes that look as if formed out of limestone or cement. In fact, it's a man-made wall whose features are called dripstone. It covers a large area of the Wallenstein Palace Gardens, and makes for kind of a jarring but not unpleasant juxtaposition of modern artistic architecture with very classic gardens and an outdoor stage where I found an orchestra practicing one day. There were several families of peacocks in the gardens which I watched with fascination as they claimed territory and persecuted one another, the mother peahens coddling the strong chicks and abandoning the weak ones. 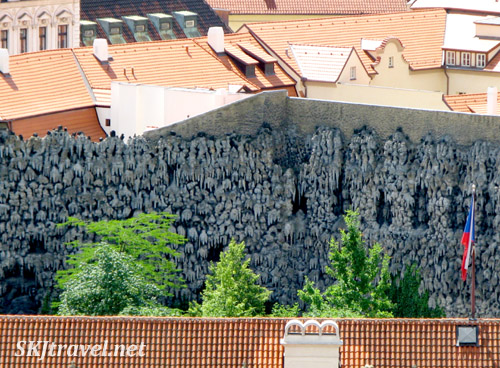 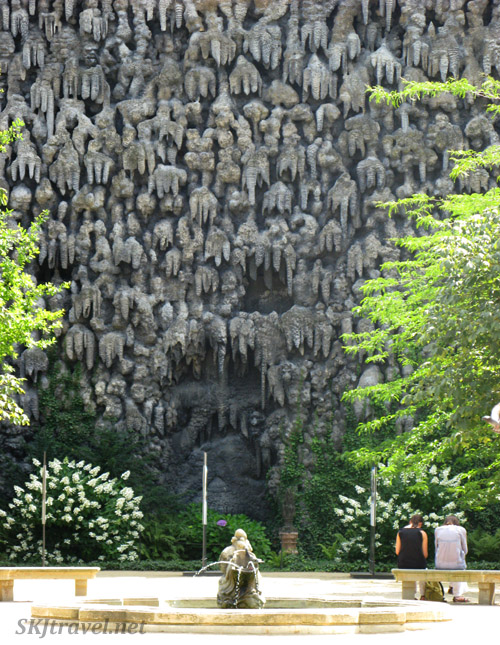 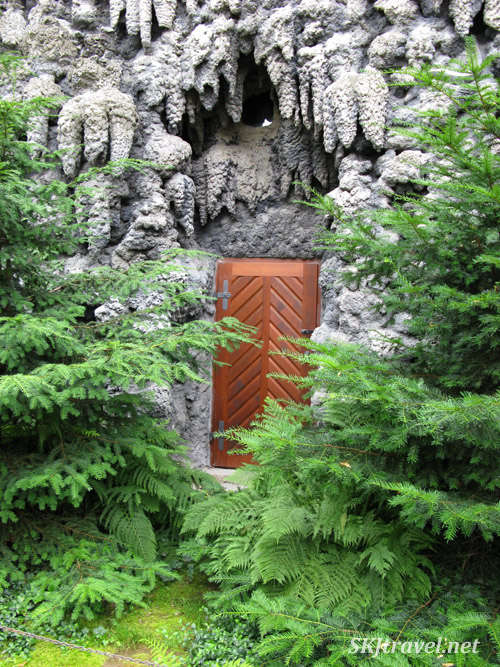 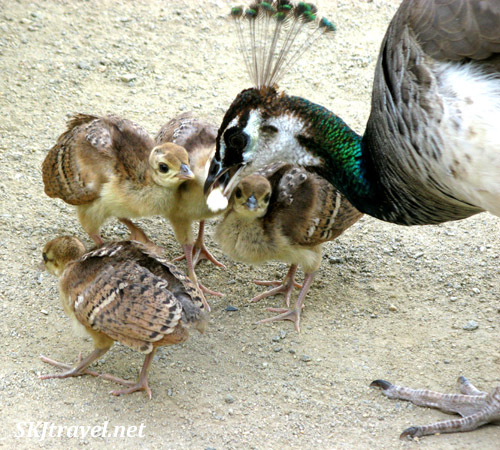 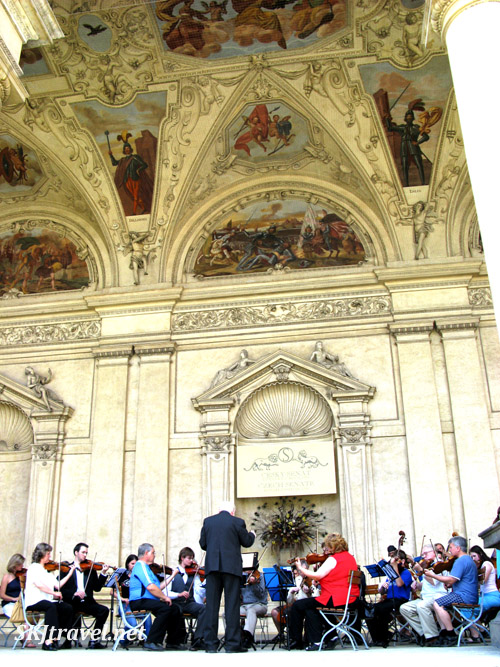 And now for a study in feeling small and insignificant in the face of human accomplishment ... stand before St. Vitus Cathedral! You can see from the first photo, only a portion of the exterior can be captured in Erik's camera lens. I've stood before some tall cathedrals before, but this one seemed particularly immense, looming above me. Can't decide whether it's ethereal or sinister, reaching Heavenward to the wide sky or glaring down upon the punificent. Daunting, in either case ..... 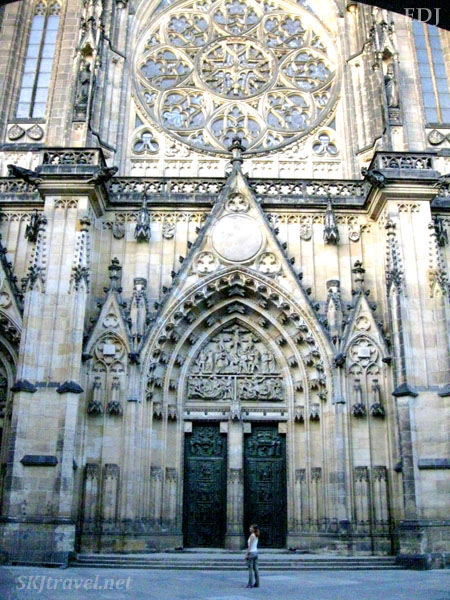 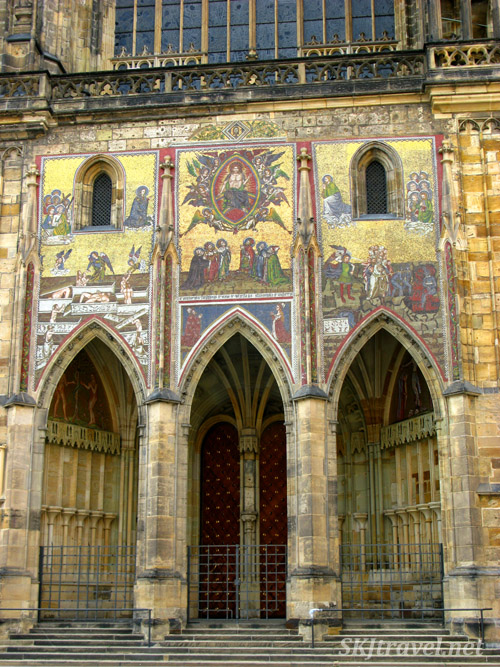 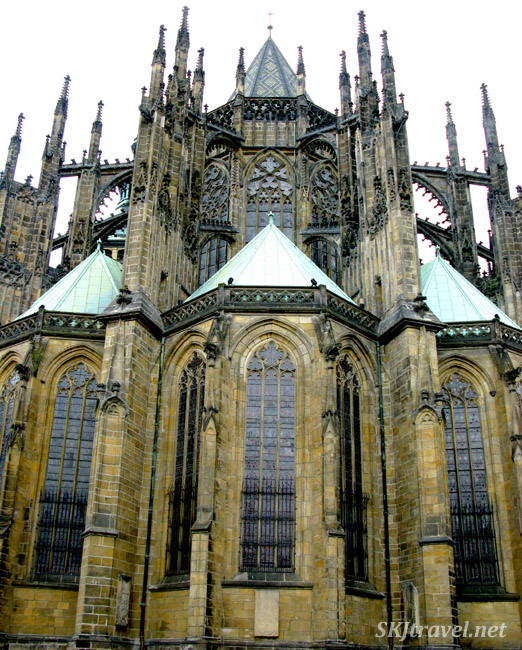 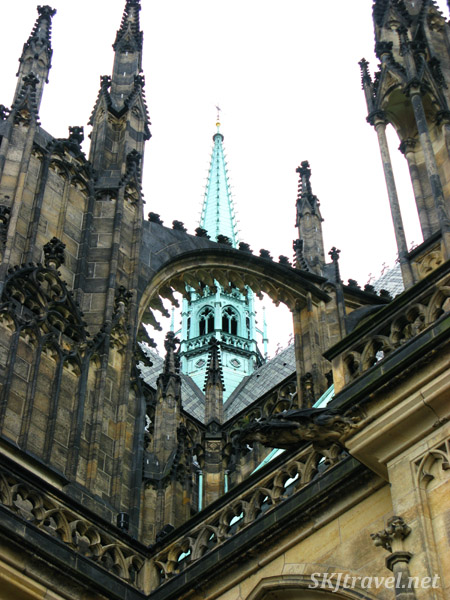 The inside of the cathedral .... 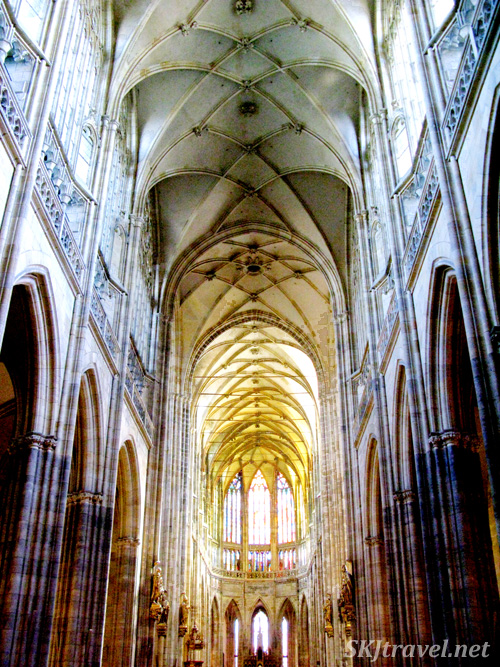 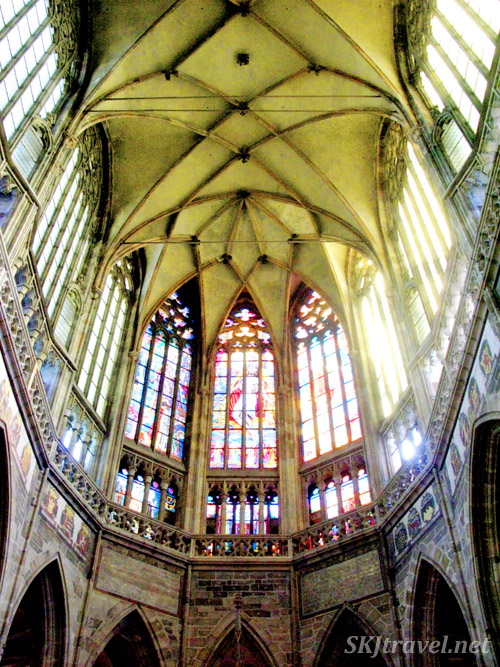 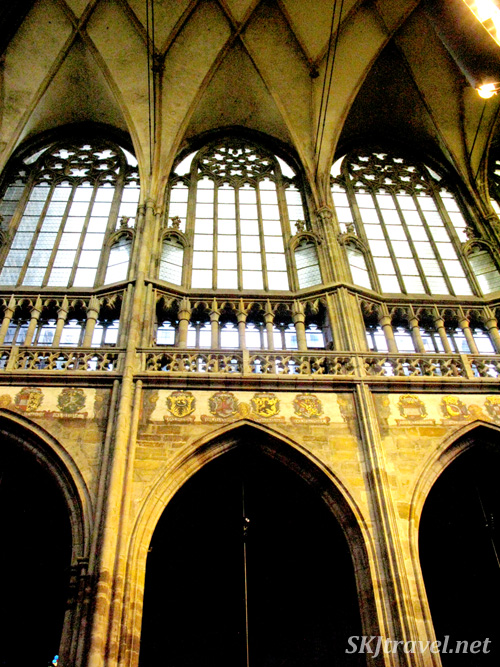 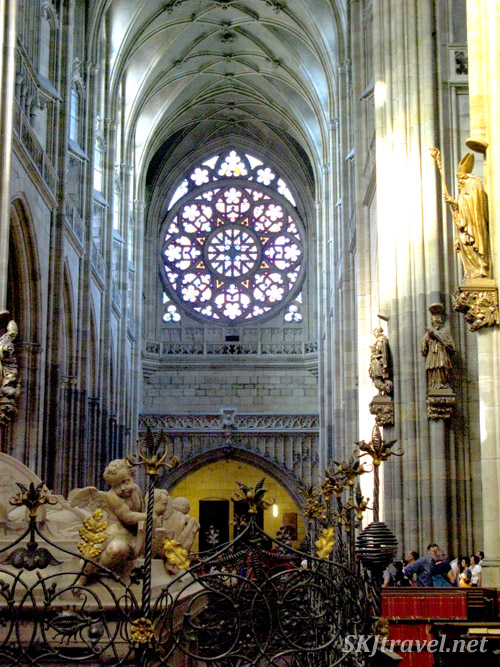 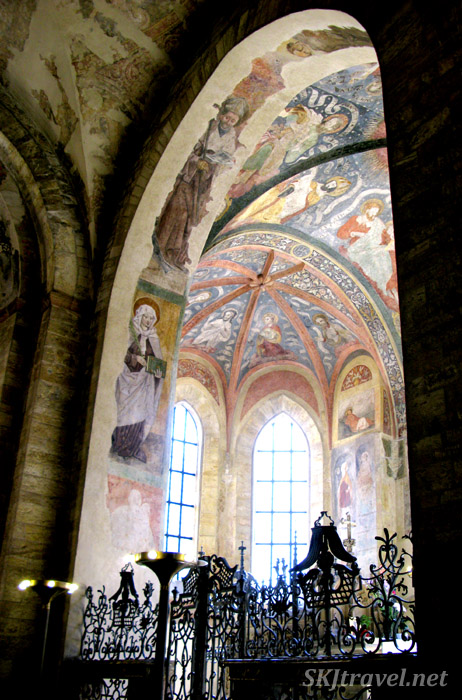 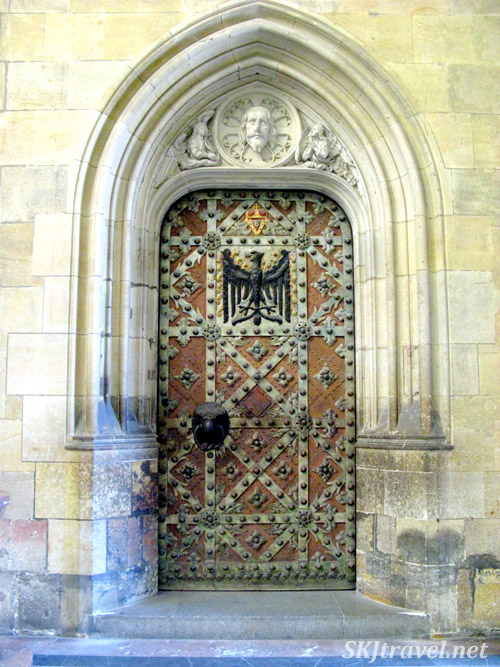 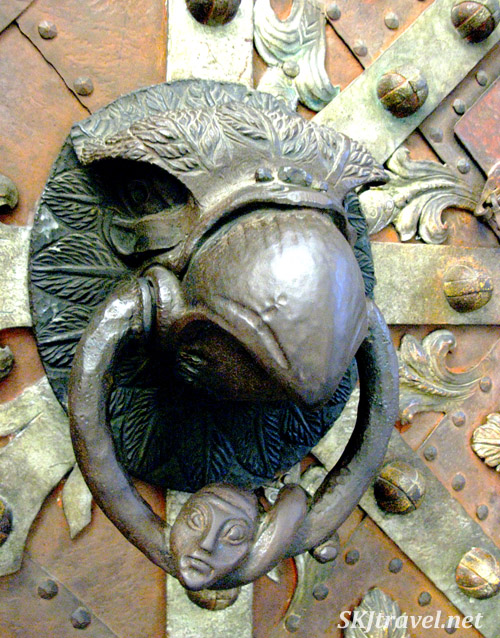 Check out the set of organ pipes! 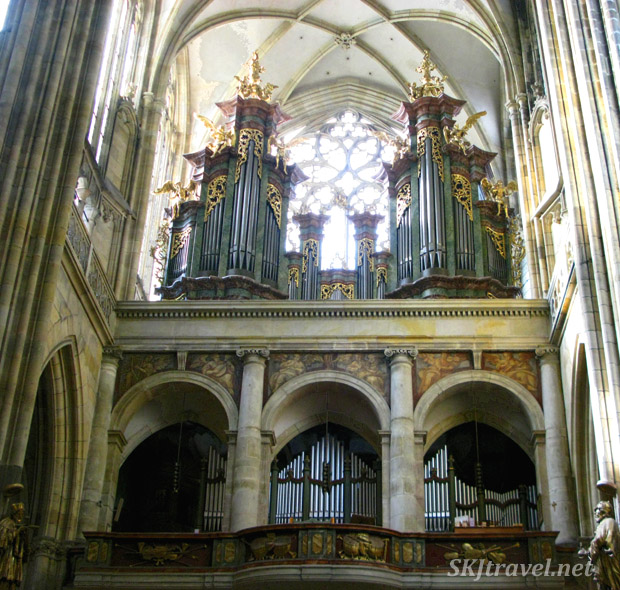 Walking down through the cathedral and castle grounds, down long stairways and narrow streets, eventually you come to the Charles Bridge, the most famous bridge in Prague. After crossing the river, you can then continue on to the Old Town Square where the town hall with its astronomical clock presides. The bridge was undergoing renovation while I was there, so it was closed down to "one lane" shall we say ... which is to say at only half its normal width, it could get exceedingly crowded, almost claustrophobic during the day and evening. 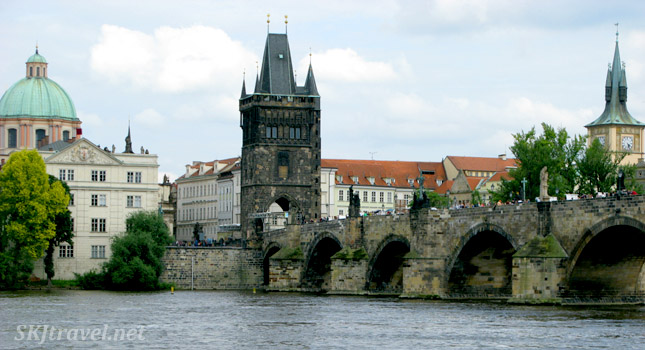 The outside wall of the tower at the end of the bridge is very ornate and full of statues and coats of arms. All along the bridge are stone statues depicting sometimes kind of random scenes. Street performers line the bridge with their acts, and artisans with their crafts, but with the half-width bridge during renovation, this got to be a little too much. I'd like to return when it's fully re-opened. Just one more reason (excuse?) to come back to this lovely city. 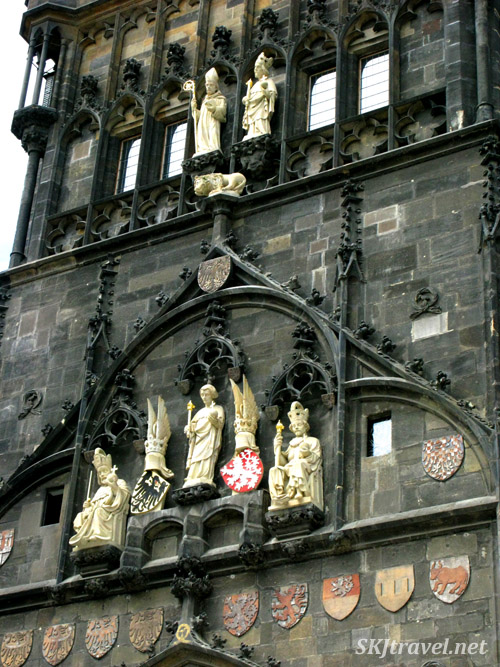 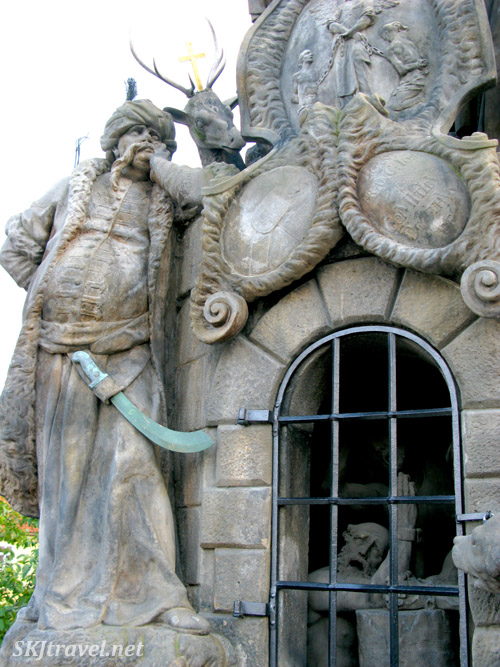 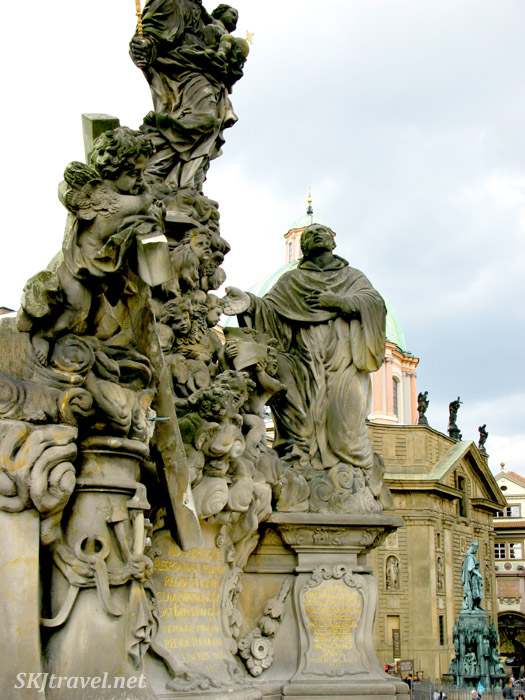 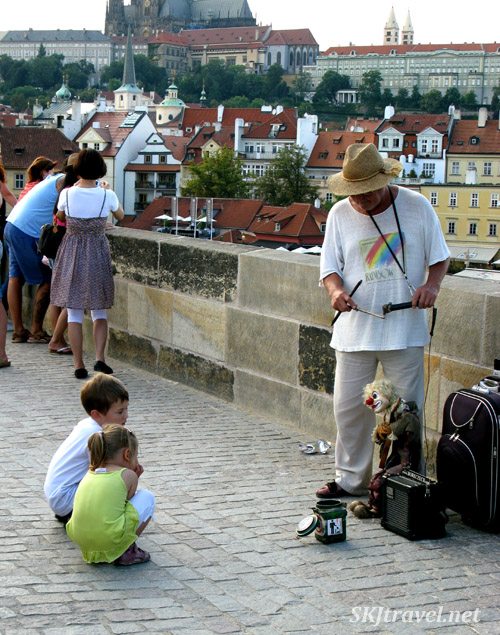