Revelation on a Rainy Day

This is a tale of one of the most touching moments I’ve had the honor to witness and be a part of. As the possibility of being reunited with Anrong in China in 2015 comes to light, I think more and more on my time with him and his family in their peasant village. Briefly, if you haven’t read other tales from the village (Dang Jia Shan), Anrong organized a research project to document the dying traditions of his home village in Shaanxi Province. I was a part of the project in two separate summers; the second summer I conducted a number of personal interviews. This scene happened while interviewing Anrong’s fourth sister (who, incidentally, was my favorite).

A brief background is needed for you to know that Anrong was the first person from his village to graduate high school. He got scholarships to continue university education, and his accomplishment of obtaining a PhD was unparalleled in the entire region around his village. He was aware of many of the sacrifices the rest of his family made for his education once it became evident he had the potential to achieve grander things than any of the other peasants even dare dream of.

One of these was that all of his siblings ceased their own education. While each child had the potential, intellectually, they each came to a point where the family had to make decisions regarding financial resources and physical labor needed for farming. For his younger sisters, these decisions were all made while Anrong was away from home in school. At each juncture, sacrifices had to be made; and each time, Anrong’s education was singled out as the one thing the family would not sacrifice or disturb in any way. Anything else would be surrendered. Now with his success, the family sees the sacrifices as justified.

One day, sitting at the kitchen table while dark clouds brooded outside, I asked Fourth Sister, who is my age, many questions about her childhood and her schooling; Anrong sat with us as translator and I tapped away on my laptop recording her answers. I knew she was a primary school teacher, and until then I had assumed, though I knew she didn’t graduate high school, that she must have had at least one year or two to have landed such a job. I asked Anrong if she went directly to high school after middle school, or if maybe she had to wait for awhile to be able to afford it.

“Oh my sister didn’t go to high school,” he said. He started to explain that her scores on the examination tests were good enough for normal school (versus technical school). She didn’t go, though, because .... he paused.

“Because ....” he looked down with a slightly puzzled expression and said, “Actually, I'm not sure. Let me ask.”

He turned and spoke to his sister. As I watched them converse in words I didn’t understand, I could see Anrong’s face start to fall. Then inexplicably he got up and went into the adjacent room. He disappeared behind the door for a moment and then I saw the back of him curl forward and heard him blowing his nose. He seemed to have gotten a sudden sniffle or allergy.

Meanwhile, I sat in silence with his sister, who is normally very animated, and for something to fill the silence, I conveyed how much I liked the pumpkin seeds I was munching, which she’d made. She looked at me meekly and rather miserably, barely managing a smile. She seemed very nervous. We sat silently some more and I saw Anrong in the other room getting more tissues and wiping at his cheeks.

When he returned and sat down, his eyes were dark and puffy. He apologized to me and then tried to tell me what his sister had just said:  The reason she didn’t go to high school was because at that time, after she’d gotten her placement from the testing scores, Anrong was away in Xian studying for his master’s degree. Their father fell very ill and so Fourth Sister was called back to live at home and help their mother and father with farming chores.

Tearfully, Anrong said he hadn’t known this, that no one told him about it. I thought he meant that at the time they didn’t tell him, and he was crying with the sudden remembrance of this sacrifice of his sister’s and maybe of the hard time in general, his father’s illness. When I tentatively recapped what he’d just said, he clarified for me that, no, he meant that he just found out right now, right here in this very conversation.

I didn’t know what to say. He and his sister started up talking again and this time they were both crying and wiping their eyes. After a time they apologized to me again, and I told them, please don’t. I closed my laptop. I asked if they wished me to leave, and I told Anrong he didn’t have to tell me anything if it was too personal or too emotional. But willingly he explained what had just been revealed to him, that his family didn’t want to distract him from his studies, in which they’d invested so much of their hope and faith. They were afraid he would leave his studies and come home to help. So the family struggled through this hard time behind his back.

I sat there rather stunned. I felt quite like an intruder right then, and yet it was because of my questions that this had surfaced. I think Fourth Sister must have figured enough time had passed that she could tell her brother the truth; perhaps in the past he had been given some very nebulous explanation for her abandonment of high school, and that’s why he couldn’t remember what it was. I think it was a great relief to Fourth Sister to have been able to reveal this secret chapter of their family’s life. At that moment, of the two of them, I felt sorrier for Anrong, because I knew how this would dig to a nearly unfathomable depth his already deep sense of responsibility to his family.

During this time it had started raining very hard for the second time that day and just as Anrong and his sister were recomposing themselves and drying up their eyes and noses, Papa came into the room and said the valley was flooding.

So we decided to go outside and check it out. For me, it was perfect timing, the perfect diversion, for I didn’t know how I was going to pick up asking Fourth Sister questions again. It was going to feel awkward:  OK, moving on … I believe it was a tremendous relief to all of us. We grabbed an umbrella and went out to the edge of the village where we could see down into the valley.

A great deal of water was moving through it and the lake that this year’s rains had temporarily formed had filled up noticeably, drowning the crops that last year had flourished in the valley. Suddenly Anrong decided to go back and get his camera. So Fourth Sister and I stood beneath one umbrella, our shoulders touching, looking silently out at the flooded valley. I can only imagine what she was thinking and feeling.

After Anrong videotaped the floodwaters passing by, his sister mentioned the idea of a still photograph of them together at the edge of the cliff overlooking the valley. I took the photo and then she requested a picture with me. So we held the umbrella together again. She and I as the subjects, and Anrong as the photographer, all stood with big smiles. But to each of us the smile represented a vastly different feeling. And the smiles were not completely genuine. Nor were they merely plastic. I think at that moment they were simply the most readily available expression to dilute our lingering bewilderment.

Above us the sky slowly churned wisps of black and gray together into a dark, heavy cream. The land was drenched in rain and saturated with color. All sound seemed muted. I felt myself as a temporary vapor, and my rubber sandals made no prints in the packed earth. I stood with Anrong and his sister, our arms linked at our elbows, the umbrella now retracted at my side, and looked out into the face of the landscape, at this thing that had spawned the two people beside me. We all breathed in deep the dampness, the chill, and the silent musk of the past, while below us the muddy water drifted down the valley. 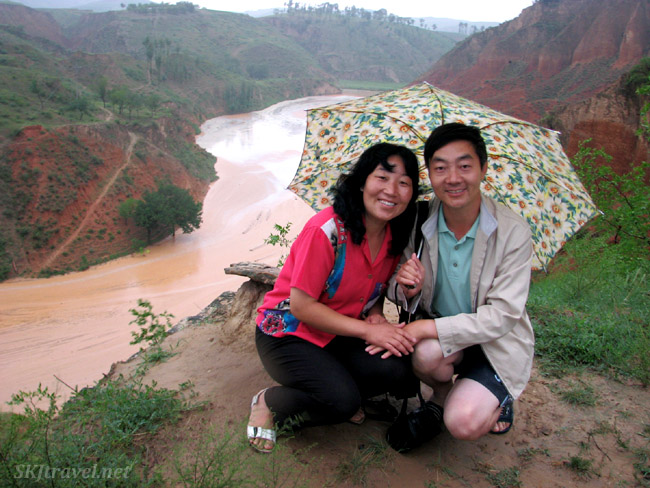 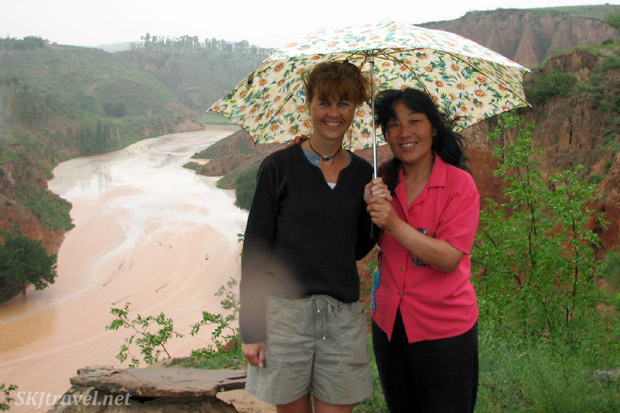