According to the recorded voice on the shuttle bus that takes you to trailheads in the park, this area of Utah was once part of the largest sand dune ever to exist in planetary history. I would like to have seen that! The Virgin River is the heart of Zion National Park, having worn a path deep into the ancient sediment. Visiting there in late October/early November, as I recently did, meant that the river was at a low volume and easily navigable. One of the more unique adventures visitors can embark on is actually hiking in the river through the deep, narrow canyon it carves (the hike is known, surprisingly, as The Narrows). 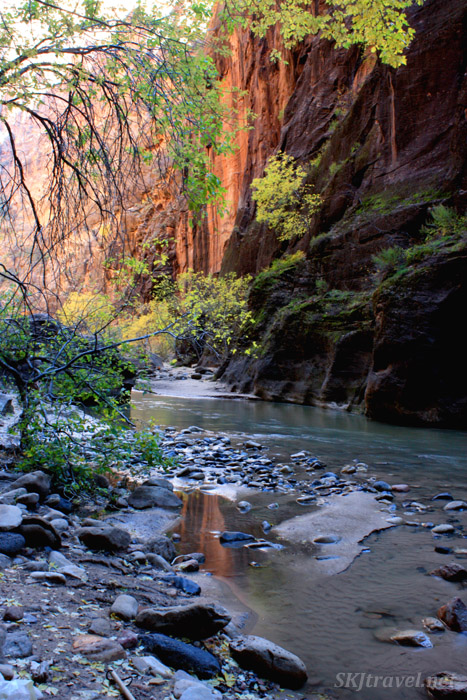 The first time I visited Zion, a good number of years ago, it was in summer, and at times the water was up to my chest. We were wearing dry suits, so I was still warm, but I had to hold my walking stick above my head being chest deep. The walking stick, I might point out, is the most crucial item one needs in order to do this hike. Outfitters in Springdale rent dry suits, wet suits, and walking sticks, or you can go in your own clothes but you must find a sturdy stick as well, for oftentimes the water flow is swift and strong, and you need it to brace yourself against the current and keep your balance. To walk the best route and find dry rocky or sandy islands, you cross back and forth across the river perpetually. 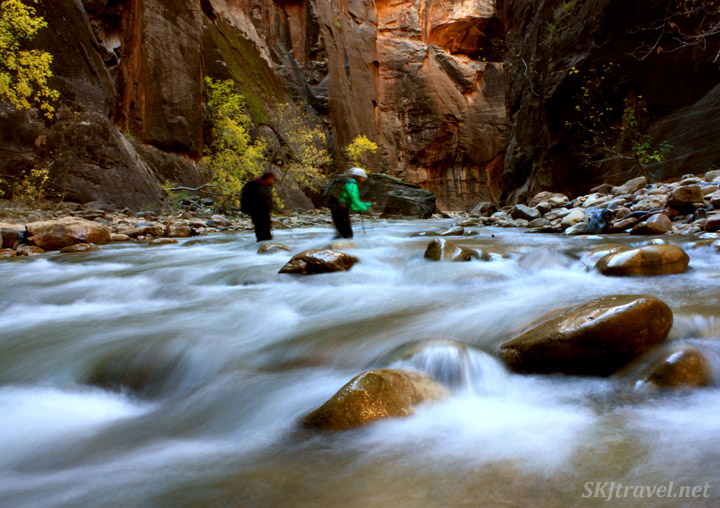 This year my traveling companions were professional photographers ... which left little amateur me feeling a bit intimidated, but I learned a lot about photography in general, photographing water in particular, and being on a trip focused on photography changed my way of looking at things. That's me below, in a wet suit and jacket, prepping a shot. And by the way, the wet suit (including booties) keeps you warm while you are moving in the water ... but after standing still with a tripod for awhile, the cold seeps in; hence, I had little footsicles at the end of my ankles rather than anything resembling blood-nourished flesh. 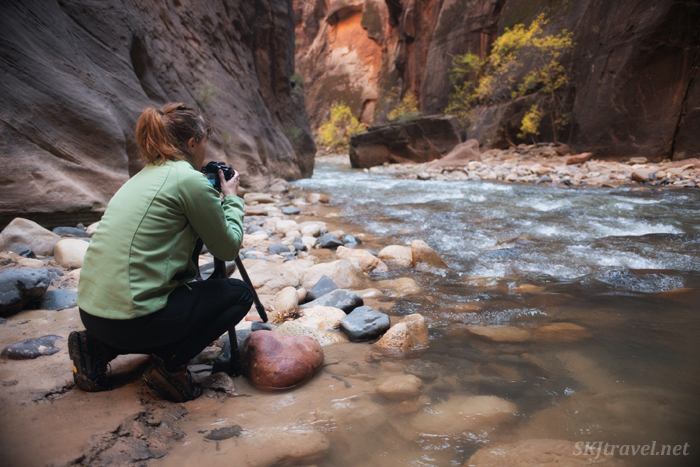 For example, in regard to noticing my surroundings, the first time I went with my family, if you had asked me at the end of the day after hiking The Narrows, what was the light like inside the canyon, or what color was the water? I really couldn't tell you much. I couldn't have told you anything about the lighting, but I do remember that the deep water had an almost turquoise tint to it, but that's all I could say.

Now I can tell you that the character of the light changes perpetually. I don't mean in terms of how the sun comes in, for it breaches the depths of the chasm very rarely; there are only a few spots that see direct sunlight. But the amount of indirect light and from which direction, the narrowness or wideness of the canyon, the color of the canyon walls (varying from a vibrant rusty red to nearly pure black), the foliage that might be soaking up the light, etc., made for very different effects and hues. Sometimes the light seems warm and golden, sometimes cold and gray. 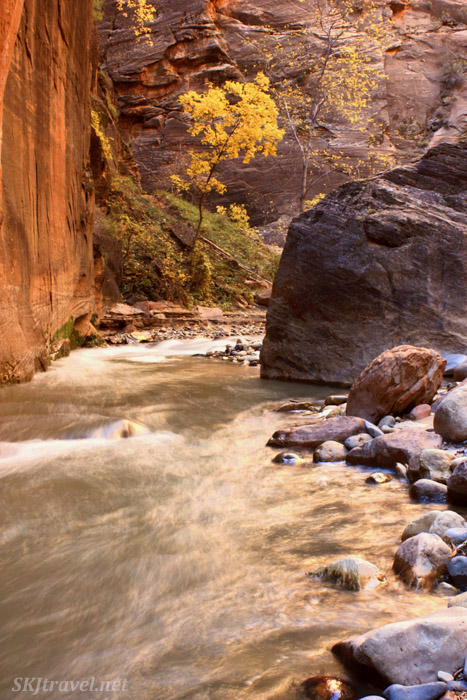 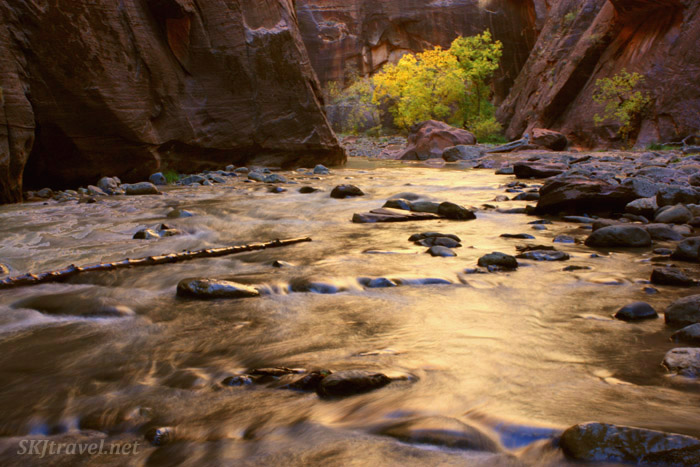 The water color varied as well, based not only on its depth, but on the speed of its current and the amount of turbulence in it, from a typical brownish color, to a vague blue, to very pronounced green. The first photo below, incidentally, is what came of the effort captured above by my friend, where I'm hunkered down at the water's edge. 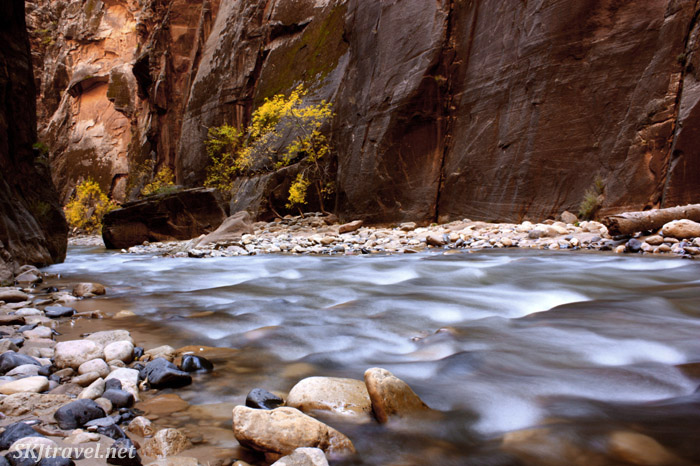 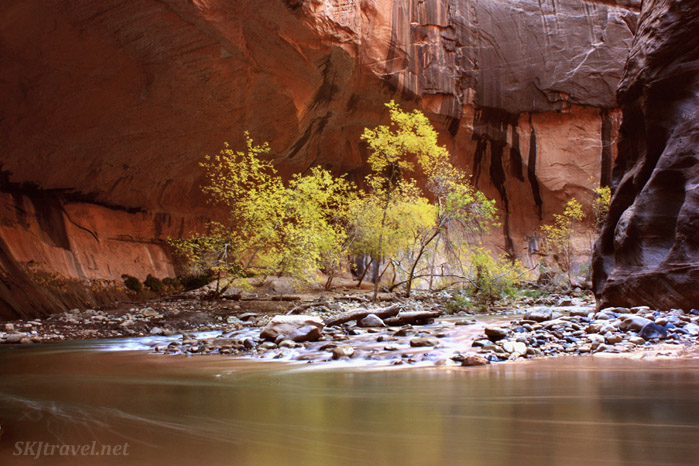 The obvious bonus delight of visiting in autumn was the addition of golden color to the trees along the river. Many times the bright yellow leaves struck a dramatic contrast with the black rock behind them ... made them appear almost neon. 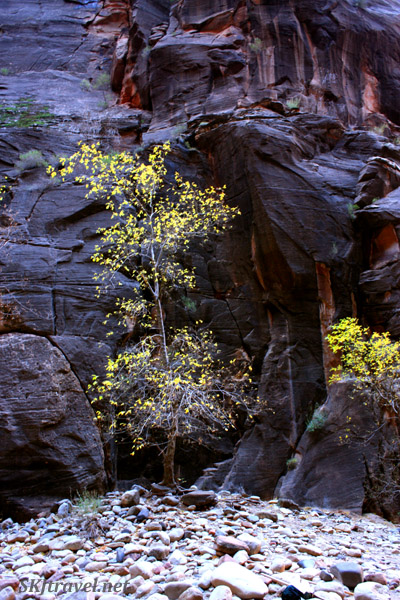 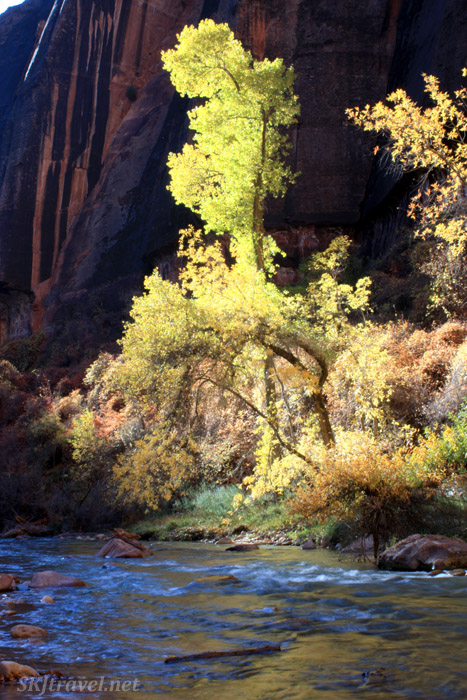 Though we were photographing primarily river shots, the draw for most people (non-photographers) is the dramatic landscape of sheer rock faces and mountains that provoke the imagination the way that clouds do, finding in them a likeness to something else. For a photographer these are very difficult to capture in a professional shot unless it's an overcast day; the light contrast is simply too severe. I, however, not being a professional, needn't consider how good a print would sell and derived sufficient joy from taking pictures simply for the sake of documentation ... I called them "tourist shots."  So I often putzed around taking tourist shots while my professional friends were focused on capturing perfect river shots. If you've never been to Zion, here is a quick peek at the typical topography. The white caps on the mountains are not snow ... the rock color simply changes. 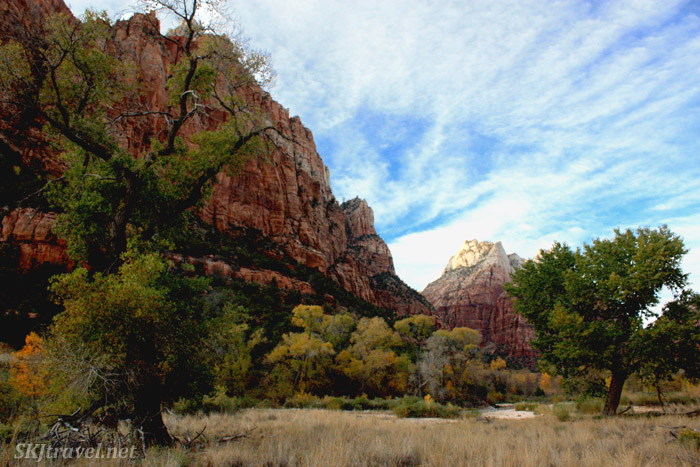 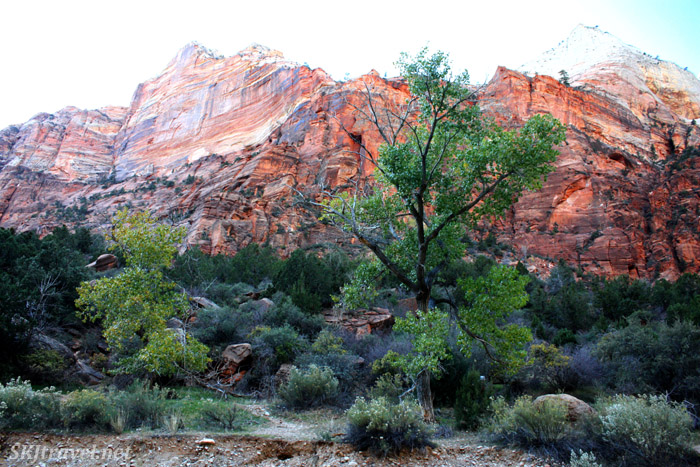 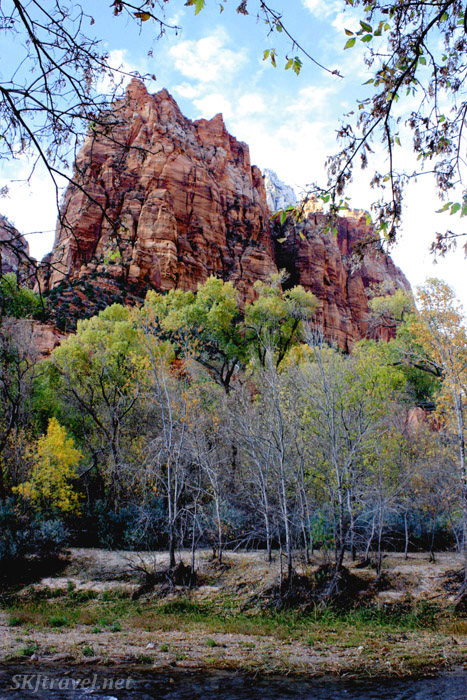 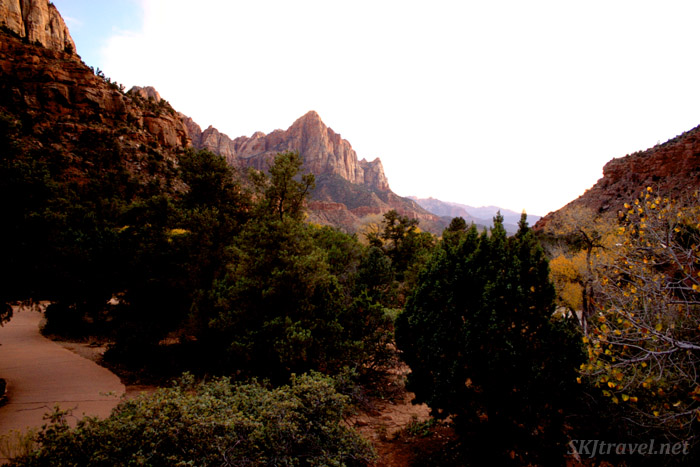 We saw lots of mule deer and some mountain sheep, and a little flock of these guys. Yeah, go ahead, Mr. Turkey ... run, run, run; I didn't want a picture of you anyway. You and all your pals just go ahead and flee across the road. 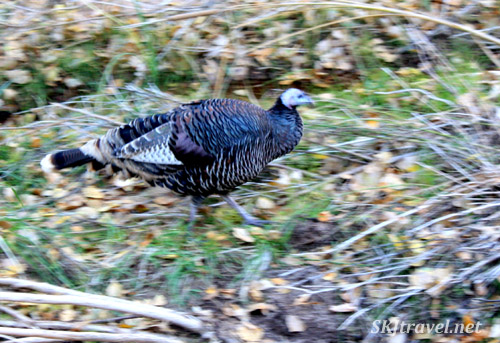 But back to the water ... In the end, this wasn't a trip of high rollicking adventure, rather, a peaceful and contemplative one. As it happens, I love watching moving water and I had absolutely no problems whatsoever (to the relief of my companions who I think worried I might be antsy or impatient) with simply watching it flow by in ripples and smooth sheets, getting trapping in eddies and rushing over little falls. I like how the water transforms into silk in a photograph. So here are a pocketful of shots for you that I captured. Or maybe two pocketfuls. 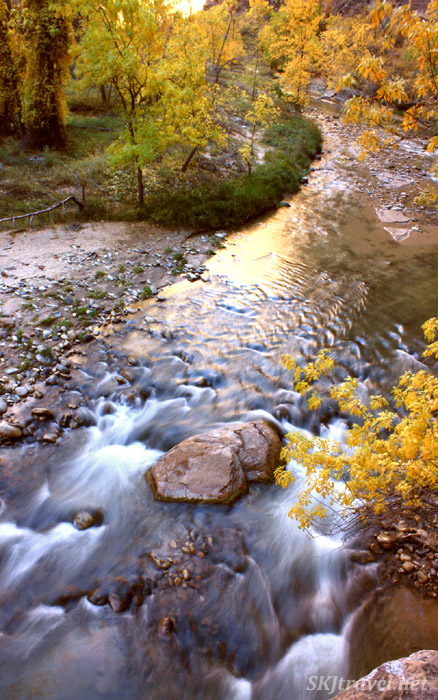 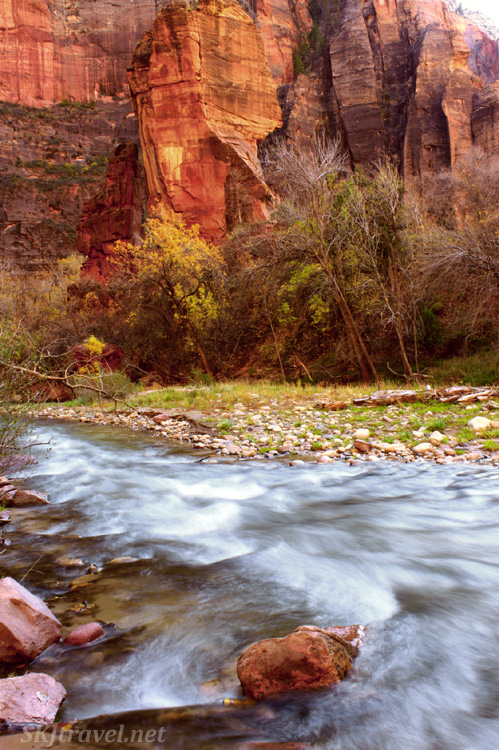 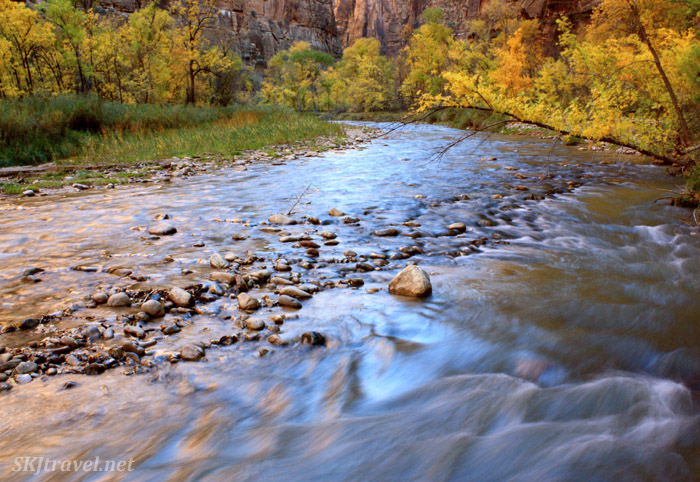 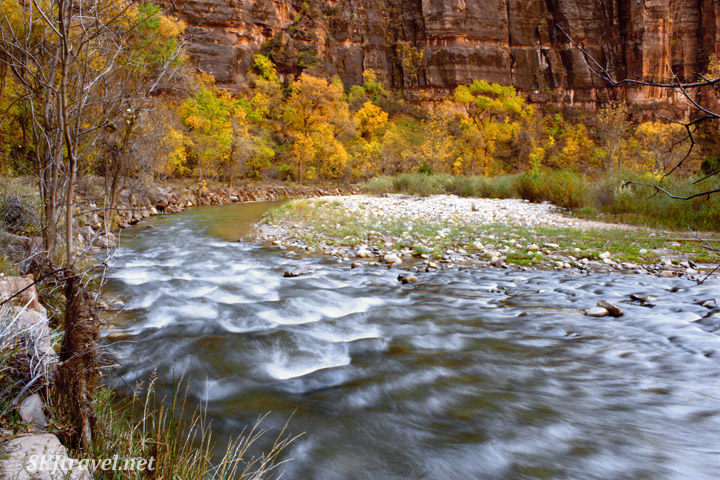 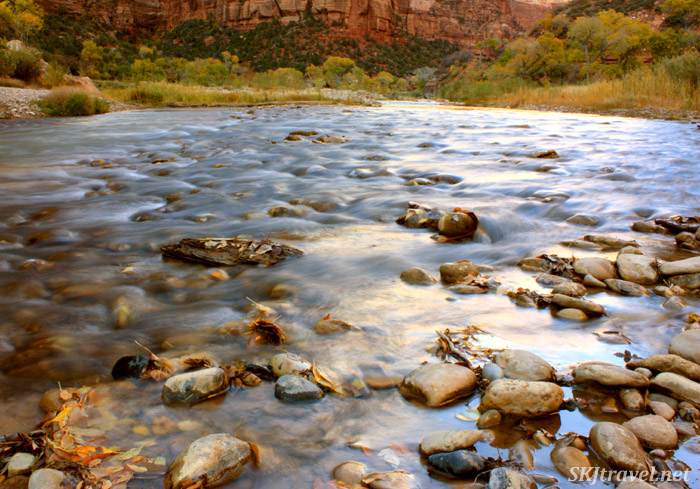 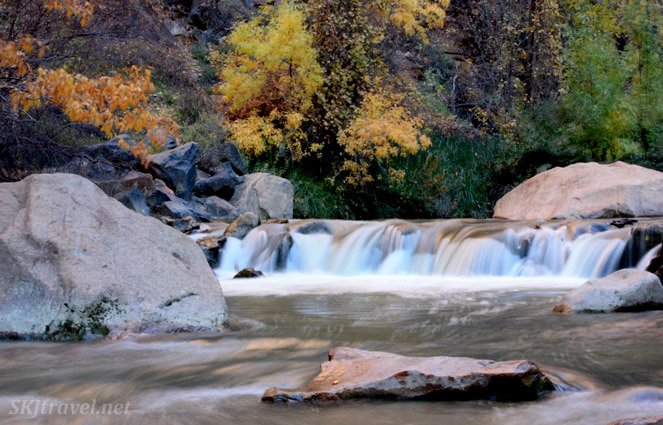 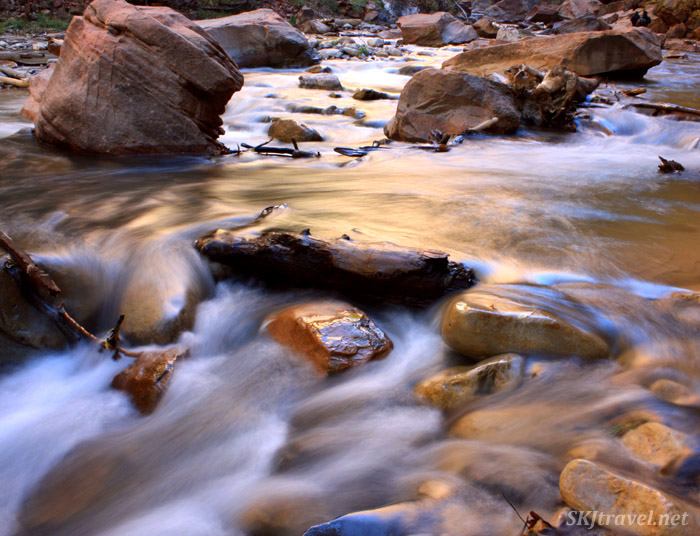 Do you feel calm, relaxed, and at peace now?