The woman of the house sat on a tiny stool at a meager wooden table answering our questionnaire. I was volunteering with a team studying the impact the encroachment of satellite television was having on a small fishing village in Brazil. We went around with lengthy questionnaires, and usually the residents invited us into their homes to conduct the interviews with us. This house was particularly interesting to me. Many of the other ones we’d been in were little more than a shed on stilts – a tiny stuffy room built of thin slats of wood. And by tiny, I mean that sitting on a chair across the room from another person on another chair, our knees would nearly touch in the middle. This house, significantly larger, the roof and walls were palm leaves, and it sat on stilts on the white sand just back from the high-tide water line along the bay.  A rickety and dilapidated ladder lay between the house and the ground.  There was no door; one simply climbed directly into the house which was open on that side which faced inland, away from the bay.  Chickens and dogs walked in and out of the house at leisure, navigating with surprising adeptness the pathetic ladder.

Things were hanging everywhere from the ceiling — many baskets, cooking utensils, rain slicks.  I really liked how they used the ceiling as storage space.  Fresh fish sat, gutted, on a small cutting table.  The only other furniture was the larger table at which the woman sat, and a few low wooden stools. The table stood against a partition. The partition was basically like having a box in the middle of the house – a small space squared off with free-standing walls, you could walk around it on all sides.  A refreshing breeze blew through the house, diluting the many unpleasant smells.  I told the woman and her children that I liked how the breeze blew through, and they seemed quite proud of this and took me around the partition to see where there was an open window facing the bay, showing me the view and how the breeze came in. I hoped they imagined my house to be hot and stuffy, I even hoped they would mistake my interest for envy.

A pretty blue bird flew around — a pet, occasionally landing on the woman’s outstretched forefinger.  One of the woman’s small daughters walked around with Tweety Bird imprinted on her shorts.  There was a hole in the wooden floor as big as the toddler; had she tripped near its perimeter, she would have fallen right through.  It appeared the wood had just rotted away.  It was several feet down to the sandy ground. I really wanted to ask, but I didn’t, why they didn’t patch the hole inconveniently eating into their living space. They would have to step around it constantly to move around the small house.

The woman asked if we would like to see her children’s costumes.

“For the festa. They are dancing in another town tonight.”

Ah. It was the festival season of Boi Bumba, when dancing took place in every village and city, from the tiniest children to the oldest grandparents. We would soon attend a couple performances at the local school in this village.

Two of the woman’s children, a boy and a girl who were likely twins, maybe 13 or 14 years old, jumped up and disappeared into the box. They returned moments later and took me by surprise. I don’t know what I expected, but considering where I was sitting – in a small palm hut with chickens pecking at the edge of a rotting floor, hand-woven baskets threatening my head from the ceiling – I apparently, naively, didn’t expect something so brilliant (judging by the degree of my surprise). The kids emerged to dazzle us with splendid costumes, a riotous mix of bright green and purple, pink and yellow, ruffles and frills and patches of different patterns. When they emerged from the box into the room, I was genuinely stunned.  They gleefully posed for pictures.

I wondered how they could afford such magnificent costumes when they couldn’t patch a hole in their floor.  But invariably, I would see that all the kids who danced at the festas had stunning costumes. They were all beautiful birds flying out of cages of disrepair. In a place where traditional culture was being mowed down by global homogeneity, which arrived with the television when the villagers saw the rest of the world for the first time and wanted to be like it, here was one bastion of cultural pride. The costumes were clearly a priority and a genuine pride to the family. Which makes them, to me, even that much prettier. 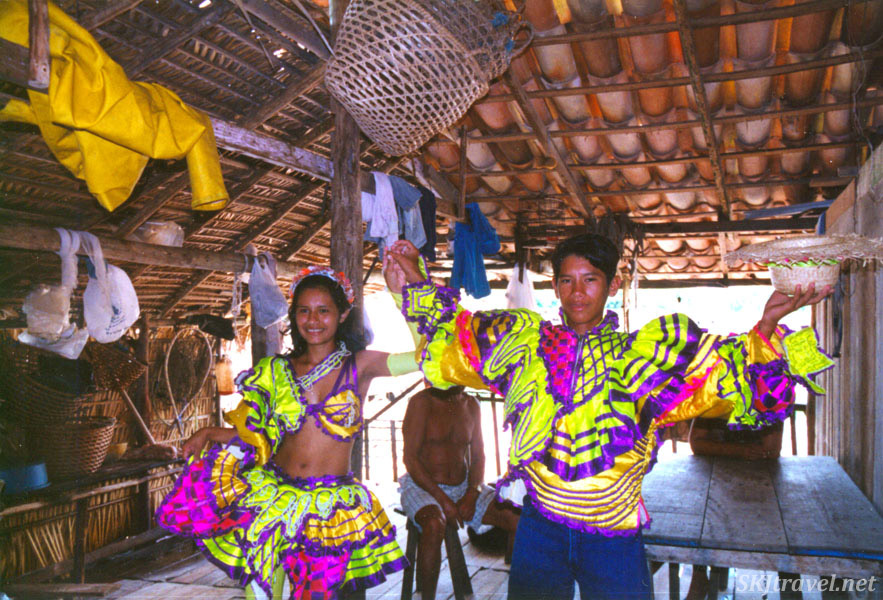