How To Get Free Rings

It’s a short and simple answer: let the lecherous proprietor kiss you on the cheek and cop a feel.

But I think you really have to want those rings to willingly put up with this loathsome behavior. I stumbled on this method by complete and unpleasant accident while rummaging through a most excellent junk shop in Tunisia, just across the road from the ancient Roman coliseum, El Djem. It was such a fabulous junk shop, brimming, overflowing with just the kind of old junk I love – antique-looking things (I would have no idea of their real age) such as little tea pots and bowls and lamps, keys and trinkets, knick-knacks of every kind … worn and dusty and piled in a completely random hodge-podge on tables, in corners, in courtyards.

My husband and I were having such a good time looking around. It was near closing time and we were the only two customers inside. At some point we split up and were each looking in a different room. The proprietor, an older guy slightly plump and talking perpetually through a smile, his shirt not quite properly tucked into his pants, followed me around pointing to this, that and the other, saying how lovely those things would be for me. Soon, he had slipped his arm around my shoulders and was pulling me close to him.

OK, I thought, I don’t know what this is about, but he’s still talking about what trinkets are perfect for me, maybe it’s just a friendly little huggy thing. I tried to move off and unhinge myself from his arm. He was still going off on the appropriateness of the trinket selection … “You’re so lovely, this is perfect for a lovely lady."

Then wham!  Big ol’ wet kiss on the cheek. I stopped dead still and just took a moment to process, did this just really happen? I looked over at him, shocked. He said, “OK, now you give me a kiss.”

“You give me a kiss, right here,” he pointed to his cheek, “just a little one.” I couldn’t even reply I was so stunned. But my head began to spin a little and all I wanted to do was get the hell (polite version of the word actually in my head) out of there.

I looked around frantically for Erik but he was nowhere to be seen. I wanted to call out for him, actually shout his name. But for whatever reason, I didn’t do it. Then, with one arm still around my shoulder, the guy turned slightly toward me and slapped his other hand squarely onto my boob. Again, I was in complete shock. And now my head started pounding, my temples felt like they were bulging out from my head. He rubbed his hand around on my poor innocent boob and finally I recovered my wits and pushed him away and walked briskly to find Erik.

The man was close on my heels and by the time I found Erik, he was nearly there at the same time. Again, I don’t know why, but I decided with the guy standing there not to say anything to Erik about it, I simply said I needed to leave. Erik, of course, had been having a splendid time perusing the junk and couldn’t understand why I would want to leave when he knows I like that stuff, too. I pleaded with him, hardly able to hear my voice above the blood pounding in my head. I felt dizzy and I told him so. Reluctantly he told the proprietor, standing right there, that we would check out now with the stuff we’d collected.

The proprietor asked if Erik would take a picture of him with me. Erik, being clueless, thought it was a great idea and told me to stand with the creep. I protested and Erik thought I was being a poor sport. Keep in mind, we’d had people ask us many times in China and even in Tunisia to have their picture taken with one or both of us, so this was not a remotely unusual request, and I had always complied. Erik couldn’t understand my reticence and was actually annoyed with me. Finally I gave in; surely the guy wouldn’t do something lecherous directly in front of my husband.

So the other day, I ran across the photo below which made me laugh so hard because Erik managed to capture, even though he didn’t realize exactly what it was he was capturing, my revulsion to this guy. You can see clearly both my disgust and his lust. It’s actually pretty hilarious. (in a second picture, I did fake-smile for the camera)

Anyway, so we then checked out and the proprietor kept trying to talk to me all friendly, but I was sullen and unresponsive. Finally, after tallying up the total, he picked up a basket of rings sitting nearby and told me to take one … “on the house.” I stared at him.

“Yes, pretty rings for the pretty lady. Have one.”

Meh, hell with it, I thought, still dizzy. Might as well get a free ring out of it. So I took two. 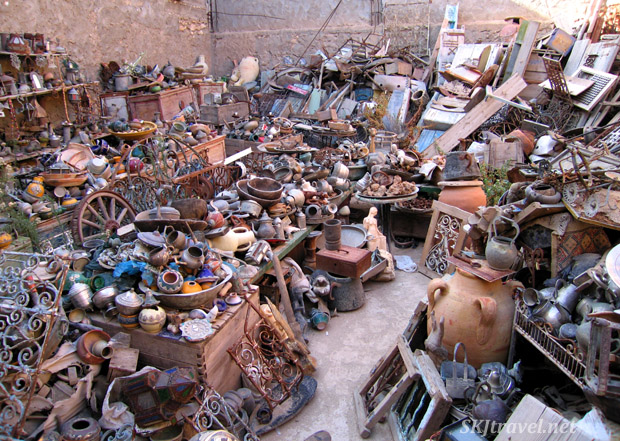 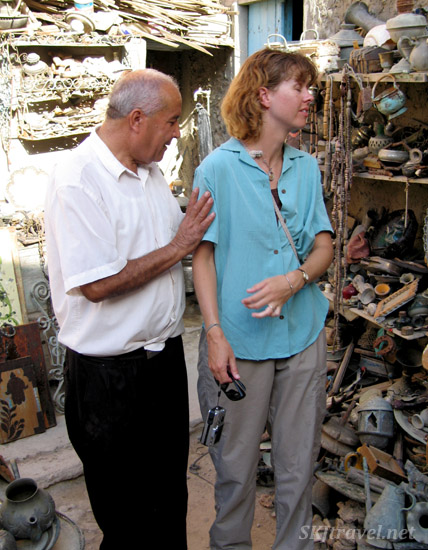