French is the Language of Frustration

If you ever hear me or my husband speaking in a French accent while frustrated, it comes from the time we were backpacking the Paine circuit in Chile’s Torres Del Paine National Park.

The map the park provides lists, in addition to the mileage between campsites (you must camp in designated areas), the time in hours they estimate it will take you. I think they hired a professional Olympic athlete to time the hikes, because on most days, particularly the first few, it took us twice as long as the map said it would. My brother and sister-in-law could make the times, but they are exceptionally physically fit. The rest of my family and I straggled behind and arrived in double the time. I was feeling pretty poorly about myself in terms of fitness, imagining everyone else on the circuit was having no problem with the times. It was very frustrating and demoralizing to watch yourself crawl along the map, knowing you wouldn’t make it to camp anywhere near dinnertime.

One day was listed as 6 hours to make it to the next campsite, but there was room for only “4 to 6 tents” at the site, according to the map. There were many people on the trail and our group alone consisted of 4 tents, so we figured we needed to be prepared to hike all the way to the following campsite, listed as 8 hours away. Hence, we (minus brother and wife) were prepared for a 16-hour day.

It was an epic day in the truest sense of the word. I got up about 5:30 a.m. We left staggered, each depending on their own assessment of their needs and capabilities (hence, I spent first half of the day hiking alone). The trail began in a long stretch of bog.  There was no way around it, you simply had to slog through as best you could and try not to get your boots sucked off in the suction. Then a stretch of dry trail through forest which was very poorly marked and kept my heart rate up the whole time wondering if I’d gotten lost.  Then came a steep and snow-covered pass; by this time we had all caught up to each other from our staggered start. The reward at the top was worth it, though, looking down on the Southern Patagonian Ice Cap … an immense stretch of deeply crevassed glacier.

Next we descended into a forest in which the slope was very steep and it was nothing but mud.  Not deep mud like a bog, but shallow mud that is as slippery as a banana peel. At first it was kind of scary because who knew how far and fast you’d go if you slipped and fell. But we each found out the answer, because we all fell at some point.  The trees ended up being the saving grace of the place.  And after awhile it became quite comical.  Once you got the hang of it, you’d grab on to a tree in front of you and just hug it with both arms, then your feet would slide down to it and past it, and then you’d reach out with one arm for another tree and grab it and hug it and slide around it, and so on.  We felt like chimpanzees swinging in the trees.

When we arrived at the campsite, no one was there but my brother and sister-in-law who had gone on ahead to try to stake out some real estate. We actually made it in only time and a half of the map time instead of twice as long, and I felt proud of myself for this.  The camp was right in the middle of the trail, basically just a few flat spots hewn into the mountain slope along the trail.  So people passed through camp all the rest of the day and most of them stopped to pitch their tent.  In the end there were I believe 14 tents in that camp with “4 to 6” campsites.  We were like sardines.

Upon arriving at camp, one Frenchman said in a thick French accent, “Zat is tze shittiest trail I’ve ever seen.” And there we learned that we were not the only ones for whom the map times were a joke. Another thick-accented Frenchman said to a passerby who was continuing on down to the next camp, “…And eef you meet tze man who made tze map, keel heem for me.”

My sentiments exactly. And now it’s fun to use a French accent whenever I encounter a difficult task or want to kill someone. 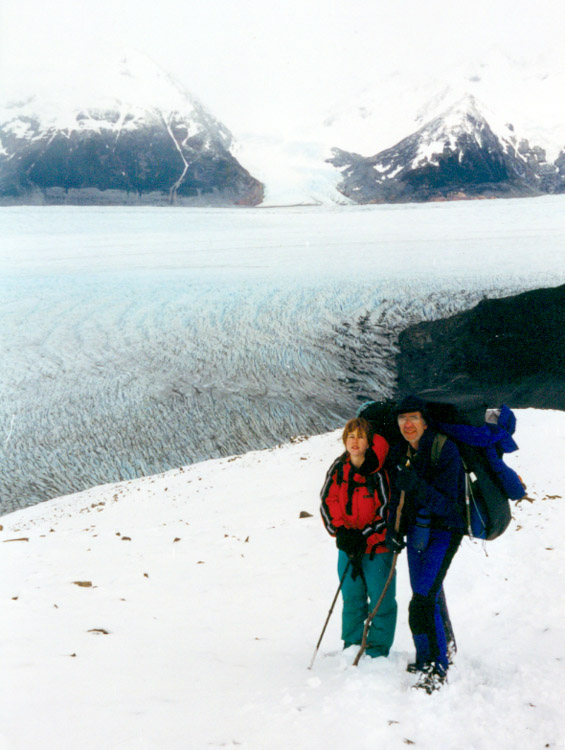 Me and my dad at the top of the pass, the ice cap below.