How to Alter Time - Canoeing the Yampa River

For a gal who listens in wide-eyed terror to the guide on every raft ride she’s taken when they describe what to do if the raft flips … if you find yourself trapped beneath it, find yourself heading into a sweeper, find yourself pulled down into a swirling hole, etc. … you may wonder why I decided to book myself into a river canoe trip. Well, maybe you first wonder why I continue taking white-water raft rides. I can’t appease your inquiring mind because I really don’t know why. In light of numerous things I’ve willingly done over the years, I can only surmise that I have a subconscious suspicion that it’s good for you to feel terrified now and then.

By and large, Erik is game for the things I decide I want to do. Not so much for the Big Canyon Swing in Glenwood (see previous post), but he was all for trying our hand at canoeing. So we signed up with an outfitter called Centennial Canoe. We ended up choosing a trip that the reservation guy said was the best for beginners, and so found ourselves launching a 2-man canoe onto the Yampa River outside of Craig, CO. I made no secret of it to Erik how nervous I was, but I tried to be cool around the rest of the crew. I never would have guessed how many people/canoes could be successfully guided down a river, but, including the guides, we had a total of 13 canoes and 24 people. Only one other couple was newbies like us. 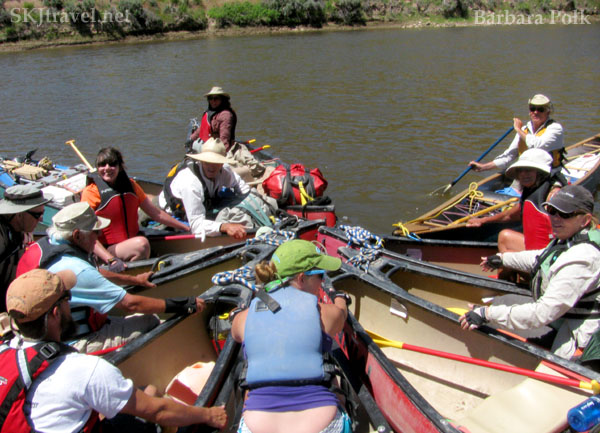 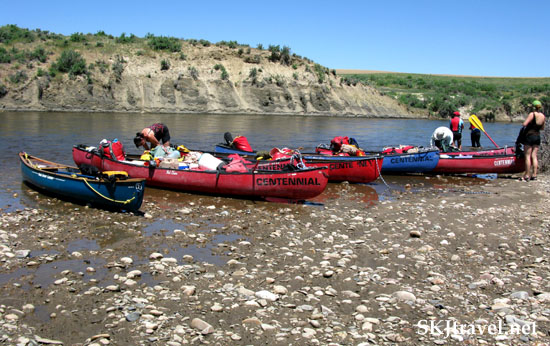 Erik had some experience playing around in canoes on lakes/ponds and has been on more rafting trips than I have, but this was the second time in my life I’d ever stepped foot onto a canoe. I imagined it would be extremely tippy and unstable; I also imagined paddling would be tiring on my wussy little hands. Neither of these turned out to be true. I also would never have guessed how much stuff you could fit into a 2-person canoe! Us, our tent, our dry sacks with clothes and sleeping bags + pads, and toiletries, daypacks, our fold-up camping chairs, a small personal cooler, and then our share of group items … food, water, kitchenware, the toilets, etc. 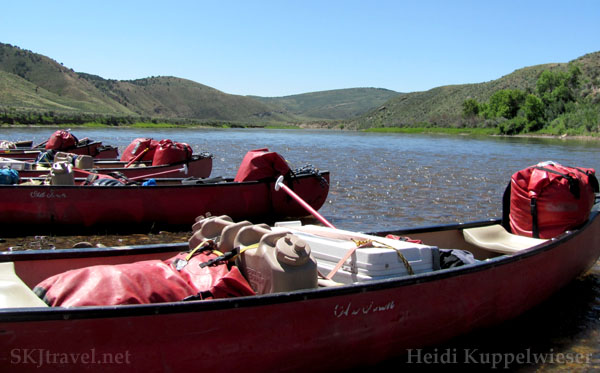 Yeah, we carried toilets, which cracked me up. A five-gallon bucket with a toilet seat glued on for pee, and a latching metal box with seat for toilet paper and poo which were carted back out under the “leave no trace” policy. Growing up backpacking, I’m plenty used to BIFFing it (bathroom in forest floor) with a squat behind a bush. These thrones … which they also erected a tall tent around for full privacy … were serious bathroom luxury. I think perhaps my proudest achievement of the trip is not throwing the toilet paper into the pee bucket. It was kindly requested that if you accidentally did this, you find a stick and fish it out to place in the poo box. Every time I sat on the pee bucket, I said to myself over and over the whole time, “Don’t throw the toilet paper in, don’t throw the toilet paper in.”

Indeed this stretch of the Yampa was great for beginners, almost glassy in its calmness. The biggest rapid we encountered was maybe a Class 0.4. Perfect. The river was running fast, about the fastest the guides had ever seen it. So we had to practice eddying-out several times right away, as it was a bit more difficult in the swift current. This is the maneuver of turning the canoe upstream and drifting into shore at about a 45-degree angle to beach it. Fortunately Erik grasped the procedure, as I would have been doomed by myself. I simply called out, a bit frantically at times, “What do I do?” Comes the reply, “Paddle!” Well yes, but – after I roll my eyes – which side, and forward or back? 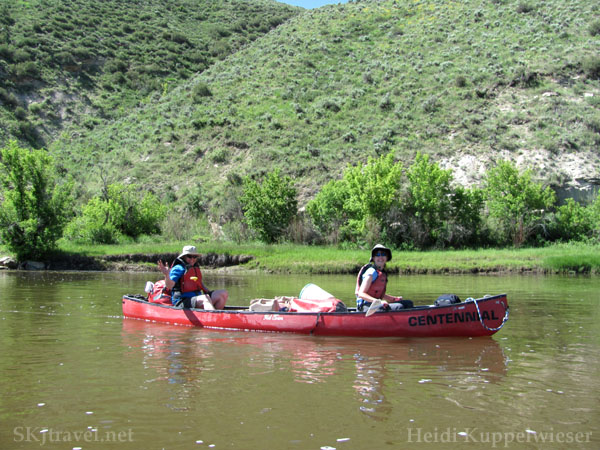 I can’t claim to have been enthralled with the landscape scenery, though it was certainly pleasant. But an extremely appealing aspect of this trip was the solitude. There was one other raft on the river, we passed each other a couple times. And one day we encountered a research crew counting fish. Otherwise we had the whole wide river all to ourselves, which was so peaceful and delightful. In truth, I didn’t consciously appreciate this until one of our guides mentioned that he did, and then explained that the other stretches of river in CO and UT the company canoes are chock full of other canoers, rafters, kayakers, etc. This intimidates me a little thinking about a future trip, as it was nice that here we only ever rammed into our own crew mates (not super adept at maintaining a straight line yet)! Knowing that a future trip may be much more crowded and noisy with a bunch of strangers, I made special note to appreciate the peace of this trip. Also for the first two days, we never saw a cloud in the sky. Perfect blue. 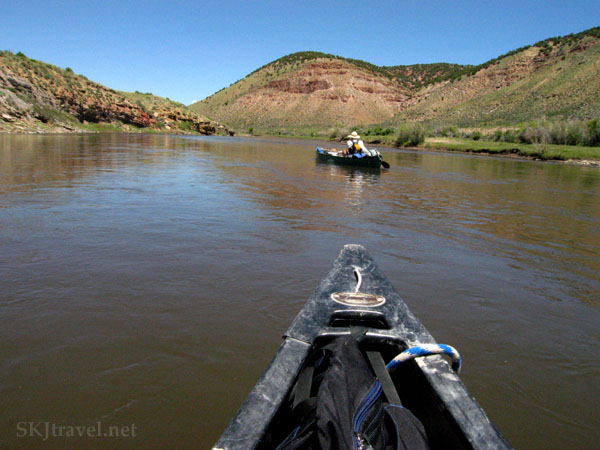 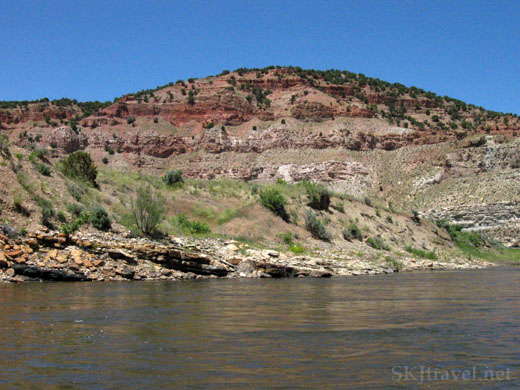 A very exciting aspect of our first day out was that we saw five bald eagles! Several in their impressive nests, and one that swooped down to the river and grabbed a fish and flew away. Super cool. The next day we encountered an amazing cloud of swallows flying out of a compound of nests in a cliffside. They were so numerous, and they kept coming like their nests were clown cars, holding an improbable number of birds in them. It was like bats flying out of a cave en masse at dusk. Never experienced anything quite like that.

Otherwise the only animal life was cows. We paddled through a lot of ranch land. And actually they could be very amusing with their range of mooing. (which of course always provokes an irresistible urge in humans to mimic) There were plenty of little calves to trigger the “awww” response. 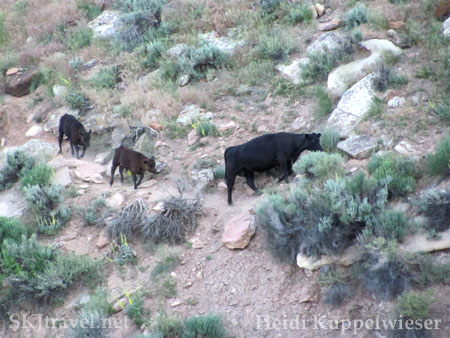 Mostly I was too nervous to dig my little camera out of the layers of plastic baggies in my daypack, so a number of photos here were provided to me by other group members. But I finally took out the camera and decided to get some shots of us in action. The photos below are the last ones before we ran aground on a rocky island in the river. I got ourselves distracted with the camera, and by the time we realized our trajectory, we couldn’t paddle away from the island fast enough. Felt pretty silly. Had to get out and push the canoe off the rocks. 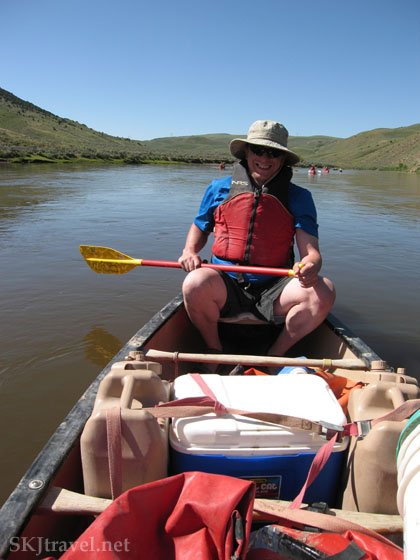 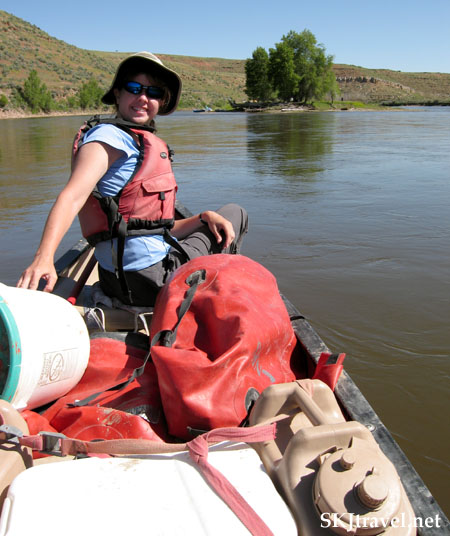 The outfitter touted the fineness of their meals, and they’re not kidding. I was singularly impressed. The guides (3) fashioned a kitchen by turning two canoes upside down on the water cans and cooked up some premium dining in the evenings. So there we were, sitting comfortably in our camp chairs, sipping the copious wine provided, munching on appetizers of fresh shrimp and fruit, subsequent dinner of fish, ribs, pesto pasta … one group member playing his guitar, a gentle evening breeze as the stars poke out of the descending blackness. Very classy. Breakfast included scrambled eggs, bacon, sausage, even blueberry pancakes. 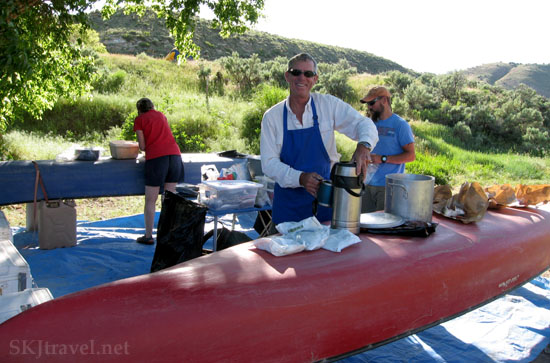 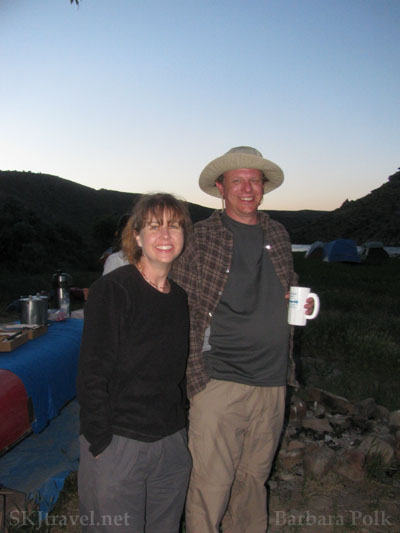 The nights were quite warm ... again, as a high-altitude backpacker throughout childhood, I usually think of camping as a cold affair, and had packed fleece pants to wear in the evening. This was so not necessary. But my favorite thing about being out in nature far from civilization held up perfectly ... the midnight sky. As I always have to get up in the night to pee, I always have the privilege of witnessing the Milky Way and the mass of stars that put me in my place as a punificent creature in a profoundly enormous universe. Some people seem to find this feeling disconcerting; I find it a splendid thing to hunker down and view the immensity.

The second night was deemed (unbeknownst to me and Erik) luau night. Several of the group had come prepared with decorations for the camp and accessories for the peeps, Hawaiian get-ups and all. Even music through an iPod with speakers. Some of us played games after dinner. Please note Erik’s glee at being handed this crazy wig … in truth, he has always wanted to have crazy-scientist hair like this. I’m not kidding about that. 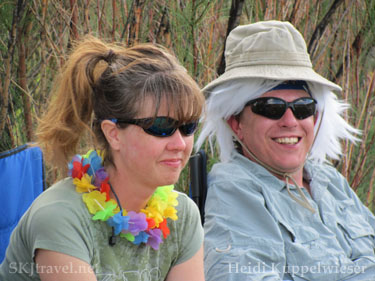 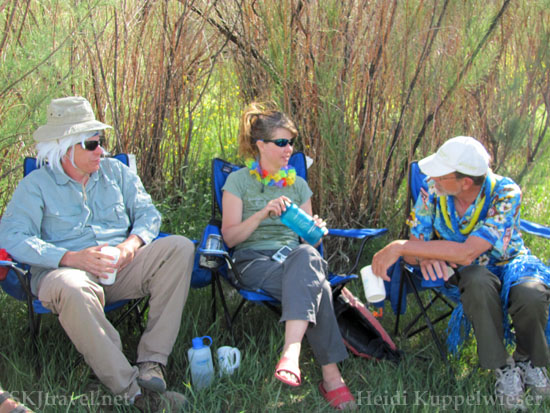 I am never friends with the wind. (even though I live in a town notorious for the winter variety of this sinister force) But on our last morning, I had a particular dislike of this foe. By now our canoe was much lighter, having used up the group supplies of water we had been carrying. It was far more tippy and nerve-wracking. Battling against the wind to go downstream in a light, tippy canoe with our nascent paddling skills wasn’t nearly as fun as the previous two days’ languid pace of paddle and drift. So when our guide suddenly expressed dismay after being on the river only an hour or less at the sight of a parking lot and launch, I have to confess to being rather pleased. If it had been a day as pleasant as the preceding two, I might have been a little disappointed at having to get off the river so soon, but as it was, the news of his miscalculation of our position on the river the day before was well-received. We had made more progress the previous day than he realized.

One last “eddy-out” and we were soon on our way home after unpacking all the canoes and having lunch in the parking lot. I think normally a 3-day “trip” (in quotes b/c I can hardly bring myself to call such a period of time an actual trip) would seem absurdly short. But in this case, our hikes and amusements in the days preceding our canoeing days seemed ages away. Glenwood Springs seemed practically like last summer, not last week. I guess that’s what a new experience can do for you … stretch time in a magical way. As my life races inexorably faster with each passing year, it was pretty special to have it slow down so effortlessly even if for just a couple days. 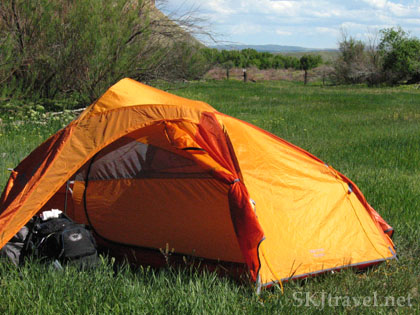 Read about our next canoe trip