Why I Don't Drink Coffee

My first experience as a volunteer researcher was in a fishing village in Brazil. Our team was there to evaluate the effect that the increasing pervasiveness of television was having on the traditional social structure and customs. We went around interviewing villagers via a questionnaire the principal investigator had designed. (The results of the study, in a nutshell, were disheartening.) This was my first trip abroad in which I was confronted with the “culture of hospitality” – a code of conduct still intact in many traditional societies, particularly rural cultures. In America we practice a very casual kind of hospitality – though it is polite to offer a stop-in guest a drink or snack, it’s not mandated, and typically, one can refuse something offered with minimal explanation without causing any offense. These convenient features don’t exist in the hospitality code of many other cultures. Owing to the intimate nature of the relationships we sought with the villagers in Brazil (i.e. not just tourists passing through, but engaging in lengthy and in-depth conversations), we were often invited into homes and businesses and shown traditional hospitality.

One day we interviewed an elderly man sitting on a small stool outside his tiny convenience store.  He claimed he owned the first television set in town, which he bought in 1971, even though there was no television reception available then.  He still had it sitting on the shelf in the middle of his store, amid tomatoes and onions, pots and ladles.  It wasn’t plugged in or even functional.  It was purely a piece of décor, an outdated status symbol now an intractable part of the old man’s life, its 8-inch screen encased in a thick, red-orange frame.

The old man’s wide, mellow smile pushed up wrinkles at his temples.  His bulbous stomach exceeded the boundaries of his shirt.  When I asked to take his picture, he attempted to button the two ends of the beige cloth together, but gave up and smiled.  His grandson, who had been milling about, disappeared momentarily and reappeared with the family photo album – a slim book with about ten pictures spanning many years.  This was presented to us with great pride, each photo explained to us and each person in them named.  The old man was serene on his tiny stool.  He began to wax poetic and philosophical about his life, telling us it had been a good one.  He instructed us, a group of young ladies, that a person is born as a blank slate, and achieves happiness by growing older and adding happy experiences to one’s palette, while forgetting the unhappy ones.

We were then offered cafezhinos – tiny cups of wicked strong coffee.  I asked our translator, Marianna, if it would be all right to politely refuse, and she said, “No, not really.”  Horrified, because I can’t stand coffee, I tried to entreat a fellow volunteer to secretly drink mine for me so I could present an empty glass, but she said she couldn’t stomach another one in addition to hers.  I told Marianna that I hated coffee and it would make me sick to drink it, so she said to go ahead and pass it up. She was now poised with palpable curiosity to see how the old man and his grandson would react.

I am quite fair-skinned and people in the village called me “blonde” even though I have reddish-brown hair.  At my polite refusal of the traditional drink and gesture of hospitality, the old man looked me over. Then he said to me, “You’re afraid you’ll turn black like us if you drink the coffee.”

In a place like an impoverished village in Brazil, racial tensions are not insignificant… white people, white foreigners in particular, are often treated with suspicion and animosity by the local population whose ethnicity is now largely mixed between native tribes and black slaves shipped over from Africa. My heart plummeted like a stone speeding to the bottom of a pond. I had offended this beautiful, kind man. I looked to Marianna with panic; she was already looking at me apprehensively, her brow furrowed. Could I retract my refusal? How could I fix this?

Then the old man winked at me. I held my breath; he smiled; I let it out in an audible sigh. The man giggled. He reached over and brushed his fingertips up and down my pale arm. “Yes! You don’t want black skin like us!” He laughed until his belly shook. I didn’t know if I should try to convince him of the real explanation, but the old man was so tickled, I decided to let him keep his thought. Whether or not he truly believed that was the motivation behind my refusal, I don’t know. I seemed, though, to have created another happy experience for him … a day with the foreigner who didn’t want to turn black.

I have it in mind someday when some kind and generous soul offers me coffee, to reply solemnly, “No thank you. I don’t want my skin to turn black.” 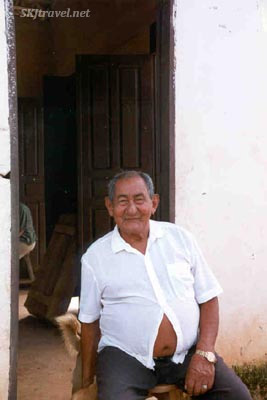 back to Tuesday Tales