First I took a trip inside the USA earlier this year, and now in June I narrowed my radius even further to within my own lovely state of Colorado. Erik and I took a little vacation to the northwest part of the state. Our ultimate destination was the city of Craig to begin a canoe trip, but we decided to make a few pit-stops along the way to some areas we have not spent much time in. Driving west along I-70 I was excited to spot some bighorn sheep along the roadside. 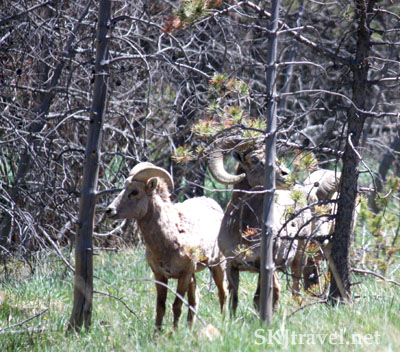 Our first stop was Glenwood Springs. A town I normally associate with the Colorado River and the beautiful canyon it carves coming into the town down I-70 from the east. Besides the hot springs, Hanging Lake is probably its most popular sight – a splendid hike to a truly sublime lake, which I’ve done in the past. This somehow affected my perception that our time there would be more nature-oriented. But in the end, the activities we chose had pretty much nothing to do with that sphere.

After we arrived, we walked the main street, had a ridiculous amount of ice cream, and indulged in happy hour (indeed happy-priced and happy tasting) at a local brewery at the Hotel Denver. Then we spent the evening at a completely random venue … the Glenwood Vaudeville Review. Yep, Vaudeville in Colorado. Who knew, right?  It was just too random to pass up. A small town production at its best … and these guys are definitely all over that genre – classic Vaudeville comedy but completely original material. It’s silly and goofy, and some acts go over better than others, but quite professional, all things considered. Begins with an old-timey sing-along while you eat dinner. Probably my favorite act was the plunger dance. Yes, five guys dancing with exceptionally tall plungers, making rhythms with the suction sounds by plunging everything from the floor to the ceiling … about as slapstick as a good fart scene but far more classy to create sound by sucking air in than by blowing it out. 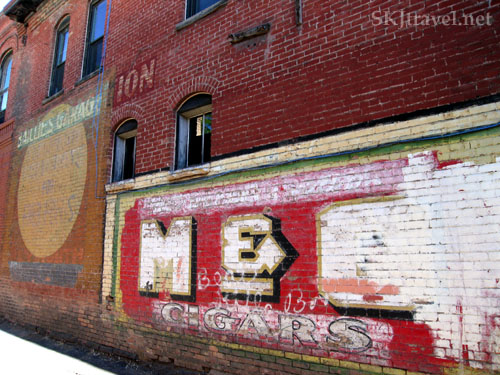 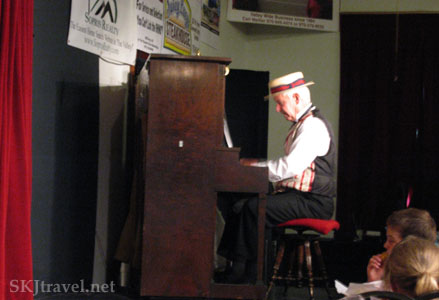 The review is held inside an old Masonic lodge. The toilet was located at the end of a hallway upstairs, and I got a kick out of some of the old photographs hanging on the walls. 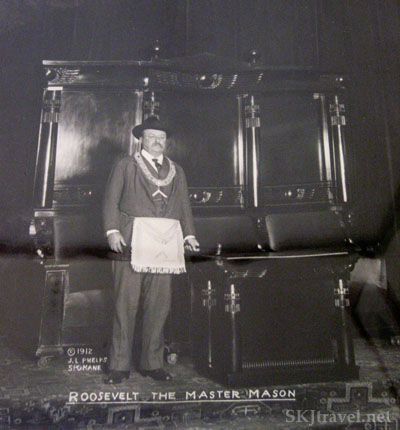 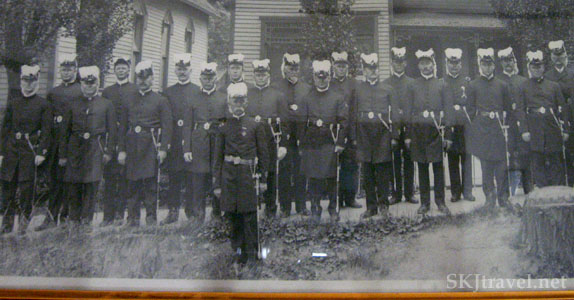 Walking back to our hotel, we passed by the well-known hot springs. We could have taken a dip, but the price was a little steep for us to swim in what really amounts to a warm swimming pool. The waters may be nice and healthful, but the atmosphere was nothing particularly appealing to us. Especially after having just been soaking in the very interesting Blue Lagoon in Iceland. 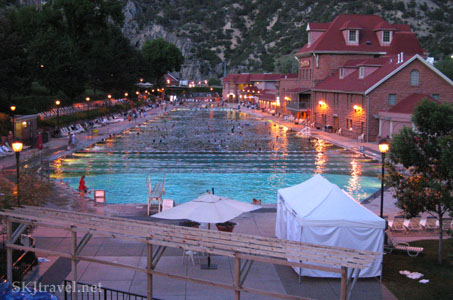 What did lure us in, though, was the adjacent mini-golf course. My father-in-law would be proud. It was a great excuse to stay outdoors in the pleasant summer evening air. Erik got a hole-in-one on the last shot and won a free game. So we came back the following night to try to improve our scores (with success).

We spent the next day at another pretty random place … you would never even know it exists, for it lies completely on top of the plateau above the town. The gondola which transports you up to it is the only evidence of the delightful little Glenwood Caverns amusement park high above the canyon. Nice views to be had. 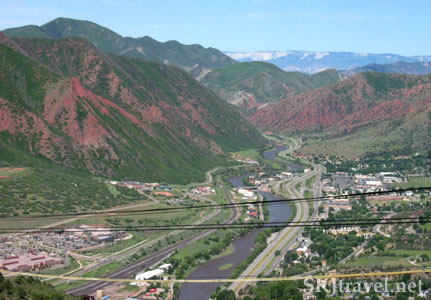 We’re suckers for amusement park rides. This is a super small affair but the rides are quality. And being a small town gig, the crowds (at least on a weekday) are minimal. So we could get off the roller coaster and literally walk right back on it as many times as we wanted. Finally we were too dizzy to do it again. There’s a really nice alpine coaster. But by far the best ride of all is the rather spectacular Big Canyon Swing. This thing swings you up at high speed until you are horizontal, looking straight down at the canyon and river below. Then of course you swing the other way until you’re looking straight up at the sky. Back and forth. I did the ride three times, and each time could not stop giggling the whole time, even when I had a stranger next to me. Erik wasn’t keen to do it again after one ride, so the second photo below is courtesy of him (I’m the little person on the left). 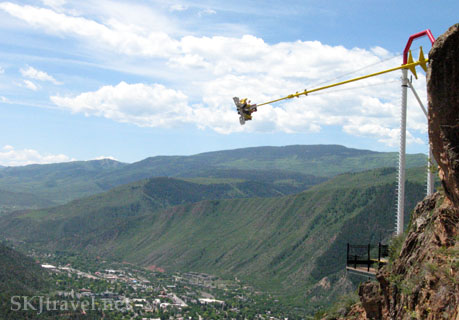 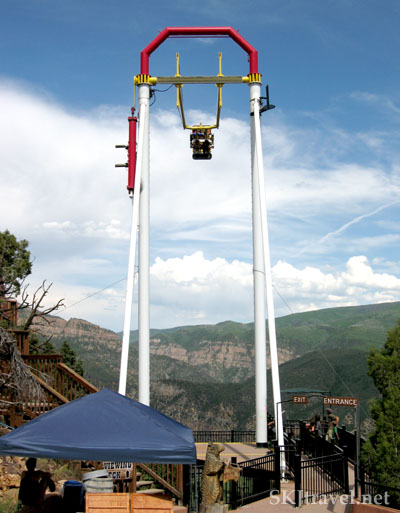 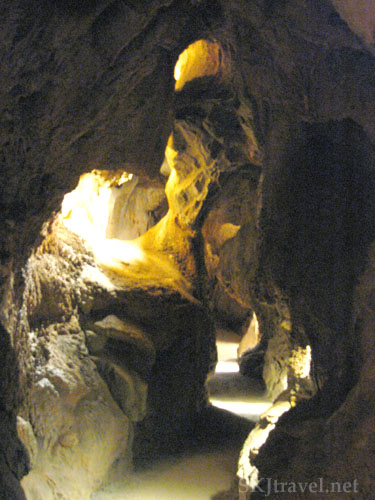 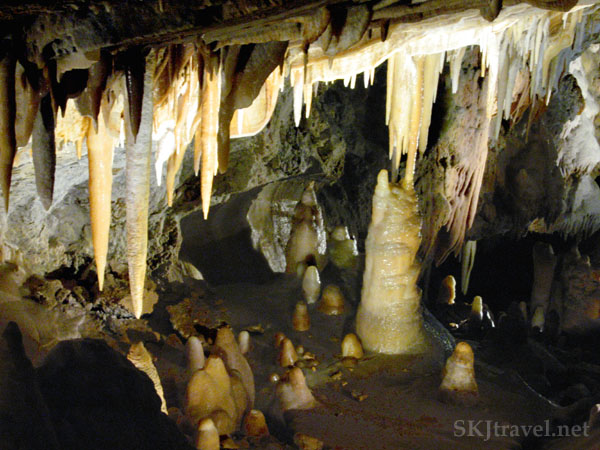 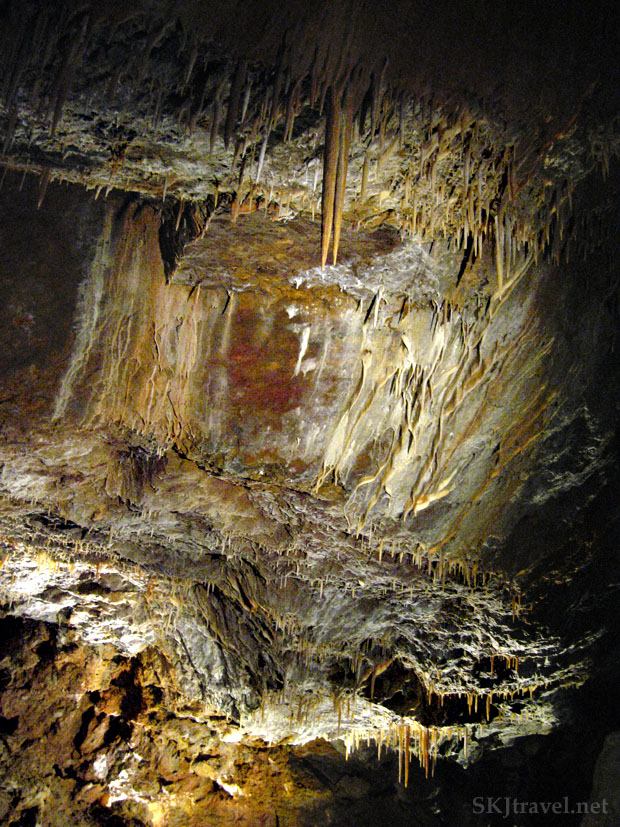 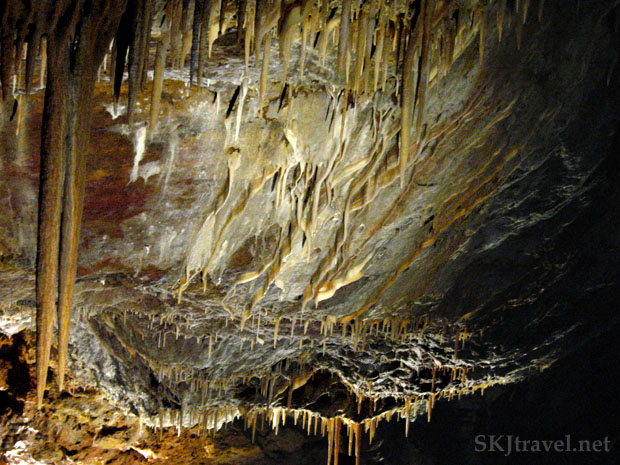 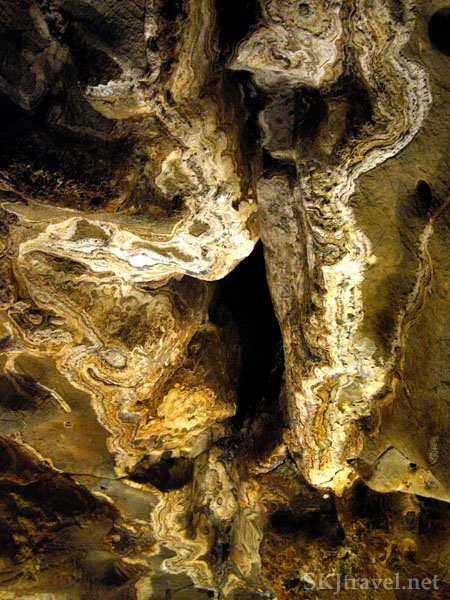 And of course any amusement park worth its salt has funny mirrors! Here are headless versions of ourselves. 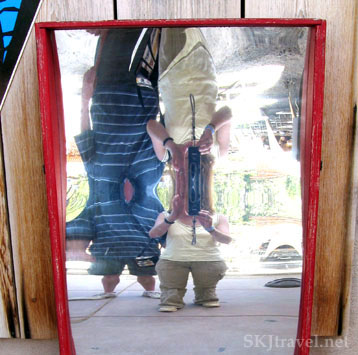 And so we headed on down the road to Steamboat Springs. The roadsides were full of springtime yellow, white and purple. My favorite time of year is spring when the meadows are green, flowers in bloom, and snow still lingers on the mountaintops. 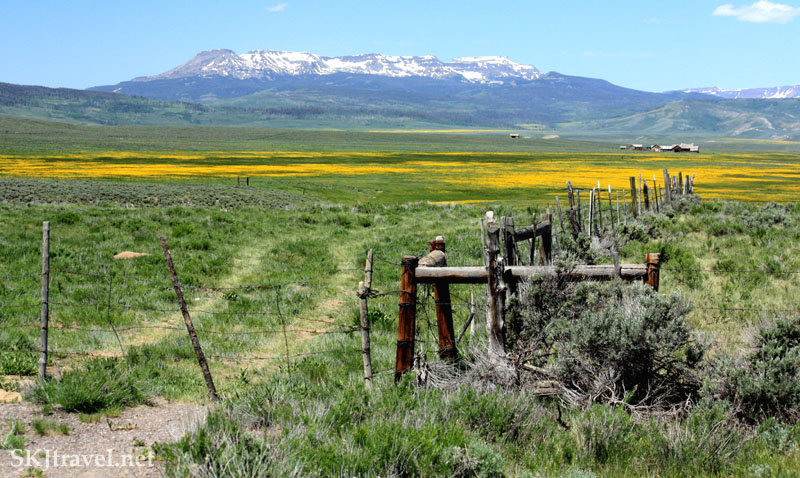 Our plan here was simply to hike each day for three days. This area, in Routt National Forest, connects to the Mt. Zirkel Wilderness area, which is where I spent much of my childhood backpacking in summer. Our first day’s plan was successfully executed as we walked to the Fish Creek Falls just outside town and hiked further to Upper Fish Creek Falls for some commanding views of the valley and a restful afternoon sitting at the falls, with some darling chipmunks for company. 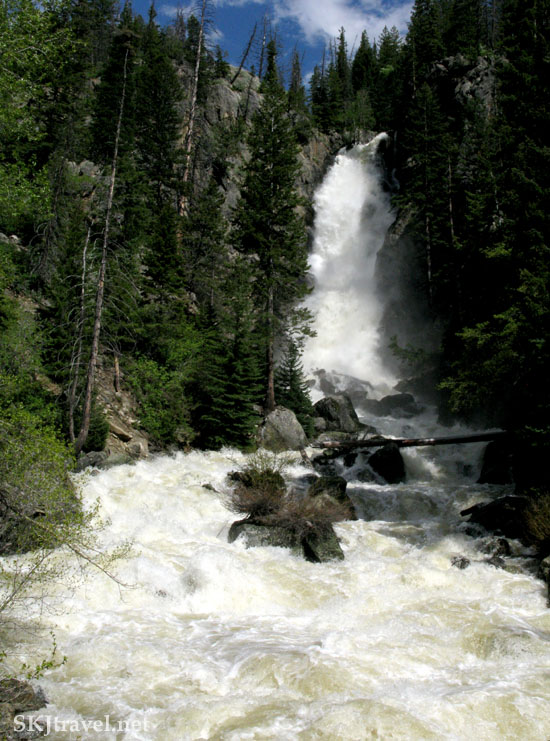 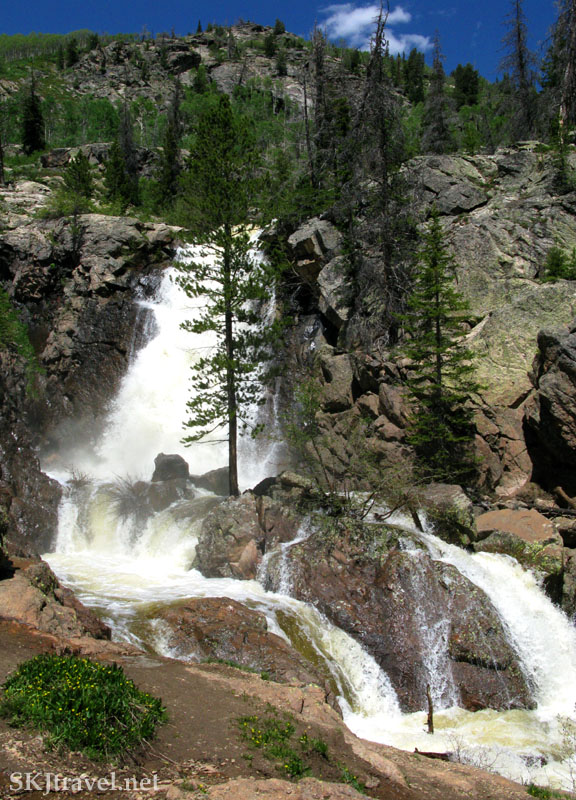 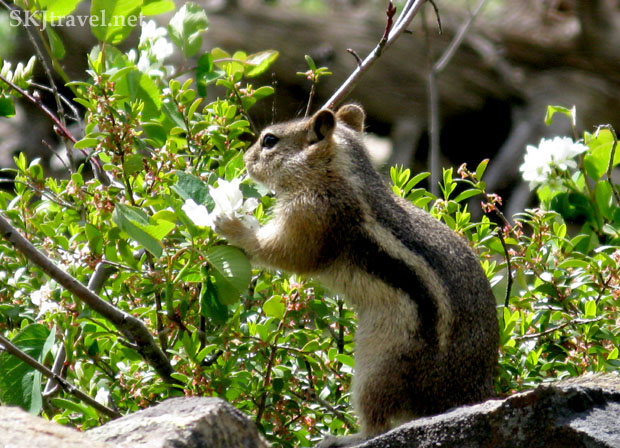 The next two days, our hiking plans were stymied by the spring run-off being at its peak. The trails all crossed creeks, and it would have taken significantly more desire and nerve to cross them than we had. Log bridges and stepping stones lay beneath a turbulent and terrifying rush of snowmelt. So we were turned back on three trails. (Later I read this is to be expected here in spring.) However, this didn’t detract from the overall effect of time spent pleasantly hiking in nature among copious spring wildflowers. We were hemmed in by blossoms on every trail we walked. And yet patches of snow remained ... which Erik felt compelled to drill into the middle of for a fresh bite. We'll see what sort of Rocky Mountain disease he ends up with. ha ha. 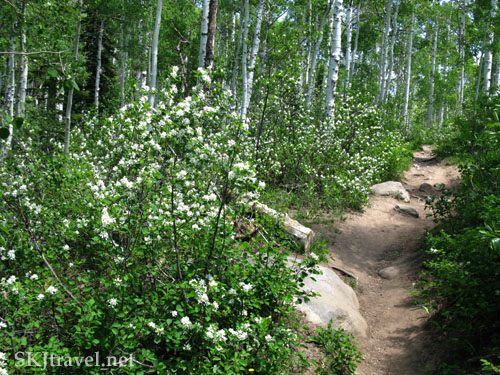 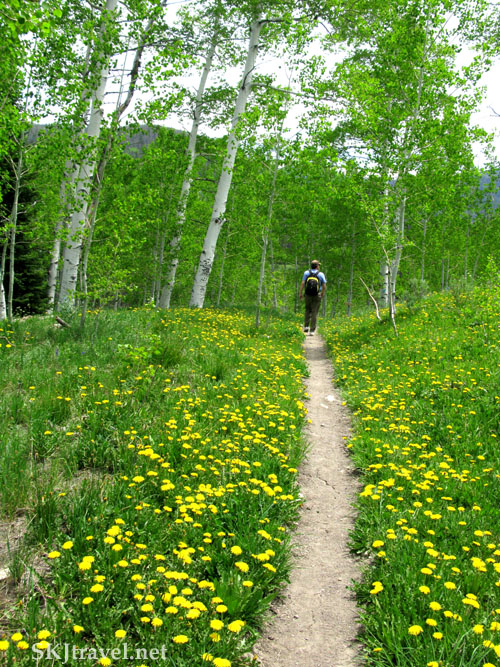 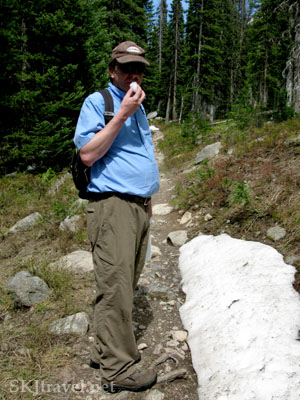 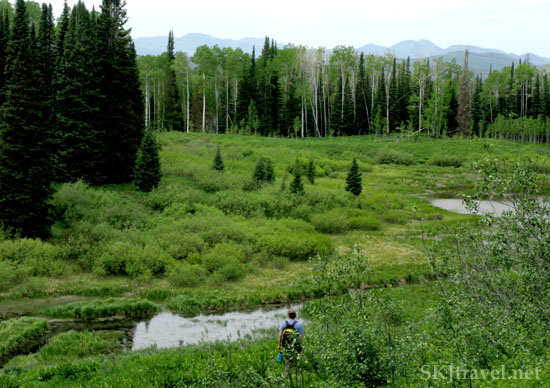 These trails also were refreshingly void of other hikers … encountered only a handful. Solitude is one of the things I most treasure in the Great Outdoors, if it can be achieved.

Headed then to the ultimate reason for our little Colorado getaway – to the Yampa River just outside of Craig to begin a canoe trip. I’ll save that for its own post, coming up soon. :-) I'll end here with a little sampler of the springtime wildflowers we encountered hiking. 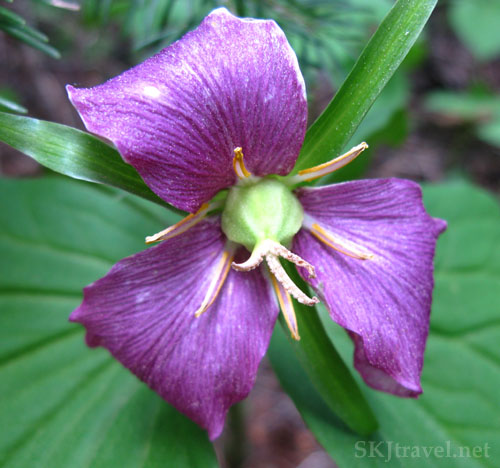 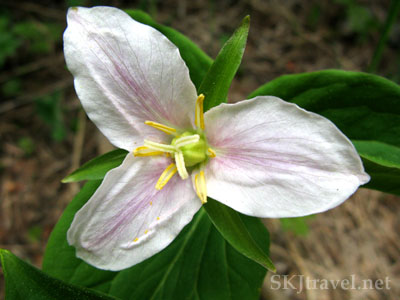 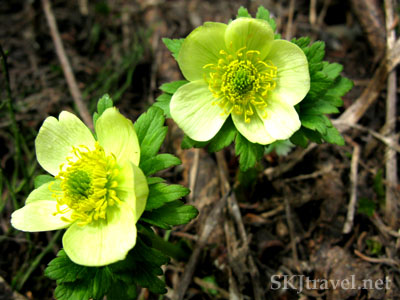 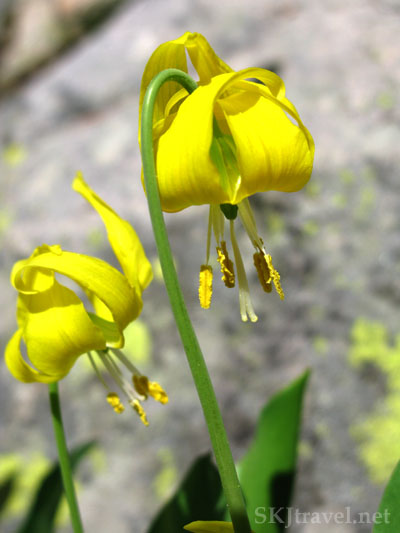 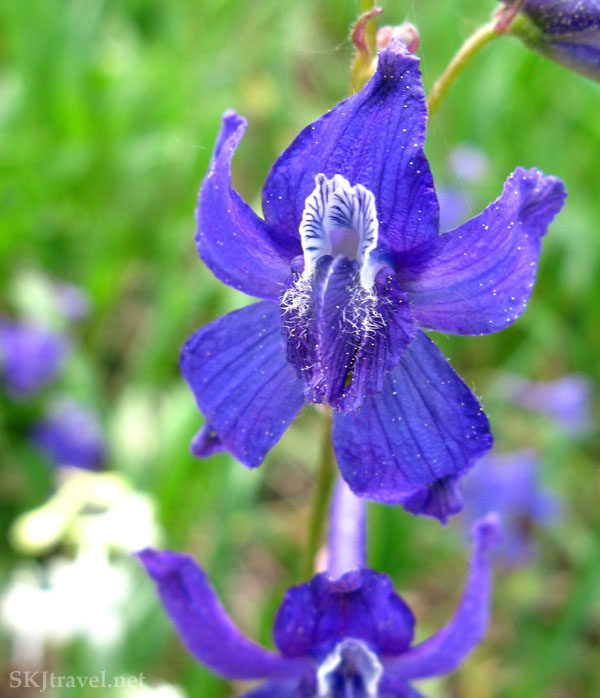 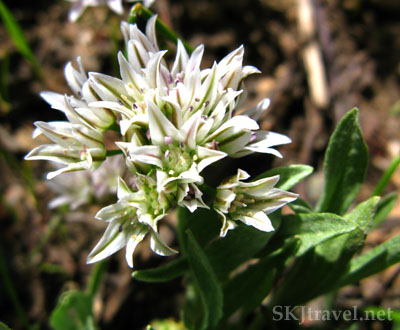