Mystery in the Riverbed

This is an incident that happened during my second stay in the Chinese peasant village, Dang Jia Shan. I was with a group of volunteer ethnographic researchers, though I myself was not a volunteer, but a personal guest of Anrong, the principal investigator. One day we were hiking in a valley …..

From quite far away, we could see that it was probably a bone.  That peculiar texture of white, sticking up incongruously out of the dark reddish dirt of the narrow valley which in recent floods had been a riverbed.  It was a bleached round hump, and Anrong knew immediately from the zigzag sutures across it that it was the top of a human skull.

Though it was perfectly obvious it was indeed a remnant of my very own species’ anatomy, the cranium plates neatly zipped together, still I suffered a brief moment of disbelief.  Human bones just lying here in the riverbed?  Anrong was rather nonchalant about it, but I and the handful of village kids tagging along with us were intensely curious and could not leave such a spooky object alone.

Li-Li found a stick nearby and started digging in the damp dirt around the skull, which was lying face-down so only the top of it was showing.  Cao-Yu joined in and as they dug around it, deeper and deeper, it was clear there was more to the human artifact than just what was visible on the surface.  But somehow no one was prepared when finally Li-Li wedged her stick completely beneath it and popped the whole thing out onto the valley floor.

We all jumped back, literally, and screamed. I couldn’t help myself; I kept screaming along with the kids even after I’d jumped back. I wasn’t frightened, just inordinately surprised.

I guess I didn’t expect it to be so intact.  I don’t know what I expected.  But suddenly a perfect human skull was staring up at us from the ground.  Its eye sockets were packed with dirt, which made the eyes seem alive and brooding.  Dirt was packed into the roots of its upper teeth, as if it had just been feasting on the interior of the earth.  Only the lower jawbone was missing.  It was extraordinarily creepy.

“Probably, I think the rain washed open a grave,” Anrong said.  Yes, probably; that made the most sense.  People have buried their family members here for centuries. Made merely of soft dirt, the hills transform themselves a little every year under the tutelage of the rain and wind.  Even since the previous year I was in Dang Jia Shan, the rain had made new holes in the paths and carried off some of their edges down the hillsides into the valleys.  Graves are bound to be disturbed in this continual reshaping of the land.  Perhaps Anrong had seen this many times over.

Still, I was rife with speculation.  Was it one of the rich people whose lavish grave goods Anrong had dreamt of finding as a child?  The victim of marauding Mongols, unable to make it to the village hide-out in time, struck down in his tracks here in the valley? Somebody with a terrifying disease whom people were afraid to bury? A Paleolithic human from many millennia in the past?  Somebody who was murdered a few years ago and the villagers hushed it up, dumped his body in the riverbed, and now Anrong was trying to cover it up with a misleading comment?  My god, what if these people were werewolves and there were bodies strewn casually about everywhere?

Probably, though, just a humble peasant numerous generations back, buried in a spot on the plateau the feng-shui master had not foreseen being thus disturbed when determining the best location for the grave. I wondered whether the skull tumbled down into the riverbed all in one trip, or if it moved down the hill a little at a time with each rain storm. Surely the family of this unfortunate head would be horrified to learn of its unauthorized journey across the landscape.  The previous inhabitant of the skull himself would surely be none too pleased to know it was lying exposed and bleaching in the sun where anyone, even foreign devils, could come poke at it.

In the past, the most grievous insult the Chinese could dish out to one another, the absolute most offensive thing to do to someone, was to scatter the bones of their ancestors.  Killing your enemies, maiming them, all that stuff would be fine warring tactics, but if you really wanted to exact revenge and spite your enemy, you had to look beyond lacerating the flesh—you looked to the realm of the immortal spirit and disrupted things lineal and eternal. In the course of feuds and wars, raiding parties were often organized not to steal or sabotage, rape or pillage, but to sneak into cemeteries and dig up graves, to pitch the bones out of them into chaos. What if the descendants of this skull are suffering all kinds of hardships and bad luck right now and they don’t know why, they don’t know that their ancestor is discombobulated and no longer in his happy burial spot?

We searched the area for more skeletal parts, but found only those of animals.  Were the animals at all related to the person? Could he have been hunting them? Eating them? Herding? Sacrificing?

Suddenly I remembered a passage from The Crippled Tree: “…behind their eyes their skeletons looked at me.”  The author’s father, witnessing one of the ungodly many famines in China’s history (this in 1911) said, “Every morning they picked up the dead: thirty thousand in a week.  Those too weak to move sat in rows, staring at those who passed them.”  If this was a person whose grave had not washed open, but rather, who had fallen walking through the valley and died without a grave, or had been buried poorly, chances are this skeleton was one of the hungry.  One of the countless millions of Hungry who have built with their bones the ramparts of a great bastion of starvation, as if to repel a tragic sadness by its ubiquity.

I felt haunted by the anonymity of this human head which formerly housed thoughts and memories. What was his name? Had he ever fallen in love? Did he keep secrets? Know how to read? Have children, a favorite aunt, a box of treasures, a nightmare that haunted him his whole life?

The ancient hills of seabed and silt loomed above the dry riverbed. As the sun lowered toward the horizon, the towers of weather-sculpted dirt around us that had lent themselves to imaginary castles when we started our hike grew in the deepening shadows into giant gargoyles. We circled and pondered the mortal remain again before continuing our walk up the valley. Unceremoniously, we left the mysterious skull lying in the dirt, gazing at the sky with its earthen eyeballs. 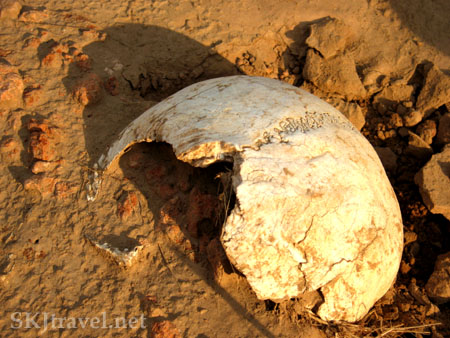 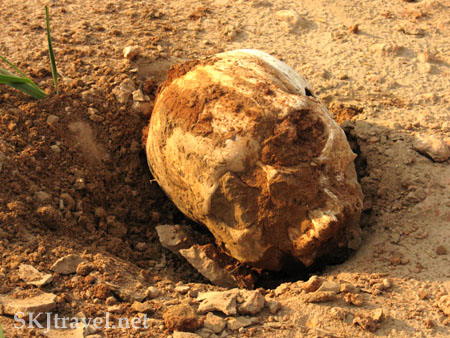 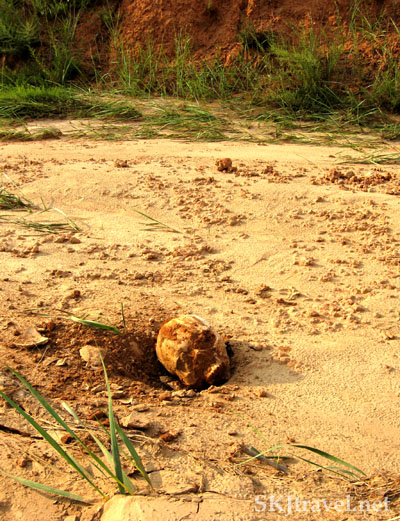