Offering Up the Past

One of the places I visited while sightseeing in Beijing by myself was the Lama Temple, Yonghe Gong, a very old and still practicing Tibetan Monastery.  My guide book had triple-starred it, but the real reason I went there was because I had been particularly entranced by the photos my dad had brought back from his own visit there. It was one of those dog-eared pages in the guidebook he used.

I hadn’t really read much about the place beforehand besides the tiny guidebook paragraph.  So as I made my way steadily back through the complex, walking through every temple, I had no idea what waited in the furthermost temple.  When I stepped over the lintel, all I could see behind a mass of people was a huge altar covered with spectacular candles and all kinds of offerings — fruit, money, tons of incense … so many offerings that monks had to continually come and cart them away in a wheelbarrow to make room for more.  And behind the altar were two enormous bare feet.

As I walked further in, I could start to see more and more of the statue, but it was only when I was nearly up to the altar that I could see all the way to the top of the 50-foot standing Buddha.  I found out it’s carved from a single sandalwood tree (and I believe the exact height is 54 feet).  But I had no idea whatsoever that such a colossus stood anywhere in that temple complex. I know my jaw physically dropped down, probably rather comically, when I finally beheld the entire statue. (This had not been represented in my dad’s photos, as it’s forbidden to take pictures inside the temples.)

I found a pole to lean against, out of the way of the throngs of people kowtowing and placing offerings, and the tour groups coming through.  I stood there for at least twenty minutes contemplating the whole scene.  And my dad was so heavy on my mind; it had been two years since he’d passed and left me feeling like an orphan.  All the time I was traveling by myself I thought about him traveling around on his own as well, and it broke my heart I would not be able to share my own journey with him. And particularly this day at the temple, since I had come here almost solely on the interest his photos had sparked in me.  Behind my sunglasses, tears started to fall, and they pooled in the little lip of the plastic rim that was slightly thicker than the lenses.  I had to reach under and mop them up from time to time.

My dad had given me loads of trinkets and jewelry from China … he always brought me something from each of his travels, whether they were near or far. From a set of six rings, I chose two to take with me to China, with the intention of leaving them there. A sentimental and perhaps silly idea, to return something of him to this country that enchanted us both. The two rings my dad had brought to me years ago lay in the bottom of my pocket.  It was here, below the sandalwood Buddha, that I felt inspired to return the first one.

I chose the white one with yellow paisley shapes around it.  I walked to the glass-top altar and laid it down in a back corner among fruit and candlesticks.  I will never forget the sound it made as I offered it back to China, the humble little “plink” of the metal ring on the glass.  Then I stepped back to my pole for a few more minutes and finally walked back outside into the incense-filled air to clear my head and my watery eyes.

I walked leisurely back to the entrance through some of the smaller temples. As I stood squished into the back corner of a crowded one, quietly admiring its beauty, an elderly Tibetan monk entered the temple at the far end and looked in my direction. Then he waded through the dense crowd, which parted for him, came directly up to me and smiled.

His smile and his voice were the most gentle, peaceful, soulful things I’d ever encountered.  Wisdom, spirituality and peace radiated from this man.  I felt as though I would melt.  I looked directly into his eyes and said hello back and smiled a big smile. I bowed my head down then, for I didn’t know how to keep meeting his eyes.  Then he left the temple.

Later, when I told my Chinese friend about it, she said, “Oh, you must have been very special for a monk to come up to you and speak to you like that.”

Perhaps he’d seen how strongly my dad was beating in my heart right then, that I was a vessel swollen almost beyond my capacity with memory and loss. Maybe he’d been in the far temple earlier and heard the forlorn plink of the ring, so very, very tiny at the foot of the giant Buddha; maybe he’d perceived I was not there with requests or hope for things to come, but to lay down the past: “This is what has been.” And he was welcoming me to a new future with his greeting. “Hello.” 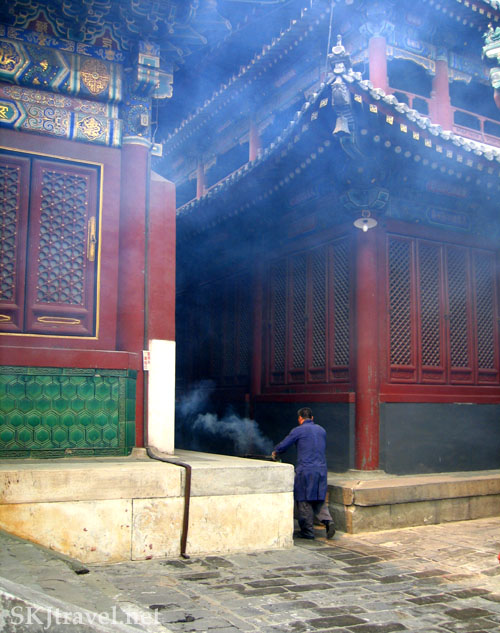 Monk carting away in a wheelbarrow the ashes of burned incense offerings, Lama Temple.