Another tale from volunteering in the game park, Hluhluwe-iMfolozi, in South Africa. Not exactly a heart-thumper, though I do have some of those, but an experience I will always remember for its effect on my psyche … hoping so much that my ranger was right when I was quite sure he was wrong. And the imagery of the landscape is particularly vivid in my head, perhaps just because it was a physically demanding trek through it. My ranger’s livid frustration and disappointment still makes me chuckle.

Transect 3 was one of the hardest – a fairly merciless continuum of steep uphill and steep downhill followed by immediate steep uphill and downhill, again and again. I lost track of exactly how many hills we climbed up and down.

I gained Dumisani’s approval right away when early on in the transect he pointed out to me a type of bird he called a chicken crossing the path. I amused him by saying, “Oh good! We can have eggs for breakfast. Let’s catch it!”

He was also pleased that I asked him about his cows. I had taken to asking the rangers how many cows they had, for one of the camp managers had told me that many people don’t store their money in a bank, but rather buy cows with it. In this unstable part of the world, where many countries change regimes overnight, where currency can be rendered practically useless with inflation, the historical value of cows remains intact.

As Dumisani and I began hiking the succession of hills, I began to wonder if he had not had any breakfast that morning. He carried only his canteen of water and his rifle slung over his shoulder, a floppy green hat perched haphazardly on his shaven head. He walked extremely slowly uphill. Not that I was at all prepared to sprint. We volunteers were told to be in adequate physical condition so we could run or climb a tree any time our ranger told us to. But these hills were steep and it was hot by 8:00 am; I just hoped it wouldn’t come to that.

We were equipped with GPS units to mark down the coordinates of all herbivore sightings. The units also counted down the mileage left to the end of the transect. As we started up yet another steep hill, hours into the transect, Dumisani said, “Ah, this is the last hill. After this we go home.”

“Really?” I questioned him. “The GPS says we still have over 2 kilometers to go.”

I showed him the GPS.

“No, it’s wrong. Just over this hill. I’ve walked this before. The GPS is wrong.”

I wasn’t going to question a man whose job it was to roam this land day in and day out. At least he hadn’t claimed there were no lions in the park (that’s another story). He radioed in to the pick-up vehicle that we were nearing the end and would need a ride shortly. Climbing up a rocky hill, spotting small red and common duikers in the bushes and disturbing a colony of banded mongoose who scurried frantically at our approach, Dumisani continued to comfort us both that we were near the end of our arduous journey, while I watched my GPS count down excruciatingly slowly toward 2 kilometers, not 0. But his panted assurances of “we’re almost there,” kept our spirits up as we trudged. As we crested the hilltop, we looked out to see only another hill looming before us across a narrow ravine.

“Shit!” The hill across the ravine was very steep, and had been included in a recent prescribed burn; there would be little wildlife in this charred desert. It was just past 9:00 am and the African sun shone bright and unhindered; we would have to scale the heights in full sun through black land, black shrub, with no cover.

“Should we radio in and tell them we still have 2 kilometers to go?” I asked.

Dumisani didn’t take out his radio. With intense annoyance, he threw his rifle back so it hung down between his shoulder blades and started down the steep hill of loose rock and skree, muttering curses now instead of yelling them.

It was hard to maintain footing going downhill. A lone water buffalo stood in the ravine watching us. I tried to traverse my way down, keeping my feet at a 90-degree angle to the slope. Dumisani, though, was hell-bent on getting down as quickly as possible. Virtually flying, he aimed himself squarely downhill until finally he lost control of his footing and fell down on his back; the rifle slid off from around his neck to land several meters uphill from where he came to a stop, its barrel pointed directly at me.

“Good thing you have the safety on,” I said good-naturedly.

“Shit,” he said, climbing back up to the rifle and dusting it off as best he could.

By the time we finished the transect, worn-out and betrayed by the land and its ruthless topography, the pick-up vehicle had given up on us and had left to get other volunteers.

There was precious little shade for us to wait under, but across the road, the land hadn’t been burned and there were two scraggly trees just sprouting leaves. It was over an hour before the truck came back to get us, during which time Dumisani had time to evolve his vocabulary and we talked of cows, wives and children, African music and cuisine. We waved at passing tourist game-drive trucks and laughed at the astonished expressions and double-takes, the passengers confused at seeing two humans sitting in the bush like wild animals. At last we approached the canopied truck bed of our ride. I climbed in first and said to the driver, “Sorry it took us so long. There was a little discrepancy with the GPS.”

Dumisani clambered aboard after me. “Shit!” he said in equal part to me, the driver, and himself.

At last we had a refreshing breeze in our faces. As we cruised along the paved road, I looked over my shoulder at the layers of merciless hills – beyond, behind, and below which wandered the zebras and wildebeest, the water buck, kudu, buffalo and rhino, whose wild existence was imminently to be crammed into a binary cage on a computer spreadsheet.  I’d forfeited an ant-free existence while waiting to be picked up, as there were no other options for sitting in shade but among the suburbs of their colony. Now I brushed off the ants that still clung to my shirt and extracted a warm and crumbled cookie from a baggie in my pocket. Dumisani sat with his eyes closed, his head shaking back and forth. Our truck slowed down as we passed a lone male giraffe waiting to cross the road, his dark spots and well-developed second set of horns suggesting an advanced age. He watched our toy truck pass by in a languid blink of his long-lashed eye and placed an elegant hoof on the searing hot pavement.

My GPS-challenged ranger ... while he was still in a happy mood. 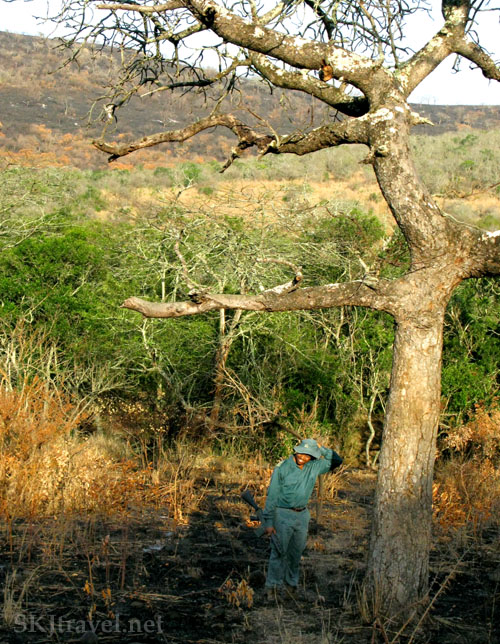