Round Up from Iceland

As a round-up from Iceland, I present you some more shots from the road, most of them taken from a moving vehicle, either through the front windshield or my passenger window, which Erik usually kindly rolled down when he saw me raise my camera. 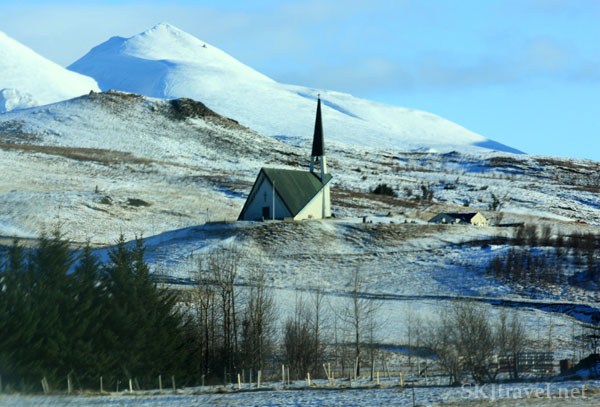 The only other country I’ve driven through with comparably lonely roads, void of vehicles for miles and miles, is Lesotho. The difference is in Lesotho, there are people everywhere – tending cows or sheep, plowing fields, washing laundry in the streams, kids walking home from school – there are no cars simply because no one can afford them. Iceland, on the other hand, is a fairly well-off country. (We never saw a single beggar or anyone vaguely like one; theft is nearly unheard of … in Reykjavik city we were told we should maybe consider locking the vehicle and put GPS in the glove compartment, but anywhere else, we were told, we could pretty much walk away and leave the car running with no worries.) So vehicle ownership isn’t the issue, it’s simply a sparsely-populated and sometimes desolate country. 330,000 people on the whole island, and most live in and around Reykjavik. For a comparison, the USA state very comparable in size (approx. 40,000 square miles) is Kentucky, with a population of 4.3 million. It may seem a subtle difference between a place like Lesotho and Iceland … the roads lack vehicles either way. But it’s a very different feeling when you understand you’re in a landscape trespassed by few. In Iceland, you’re on an island dominated by inanimate geologic forces, hostile landscapes of volcanoes, lava fields, and glaciers. Many describe it as "alien," but I'm more of mind to call it magical. (that word again!) In any case, you are acutely aware of the monumental geological forces that have shaped our planet. 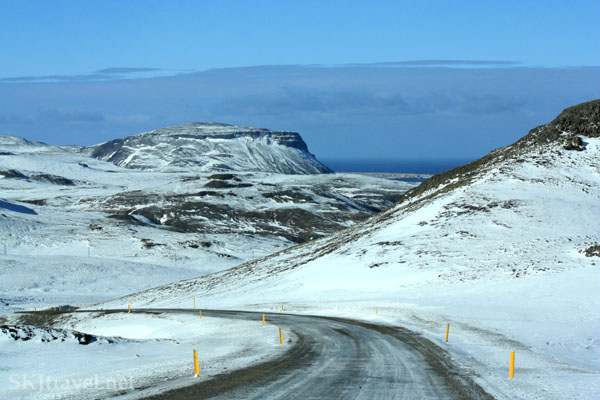 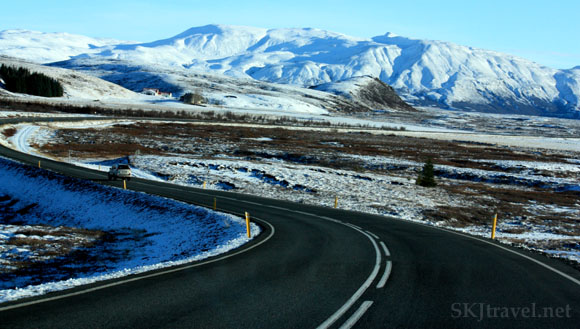 The few people who live sprinkled around the island outside Reykjavik, either in coastal fishing villages or on farmland, seem a bit heroic in their lonely and harsh existence. This heroism was continually accentuated by how tiny the houses and barns looked against the dramatic landscape looming all around. For example, I’ve point out here, in the first photo below, the house and barn, little specks below the mountains. 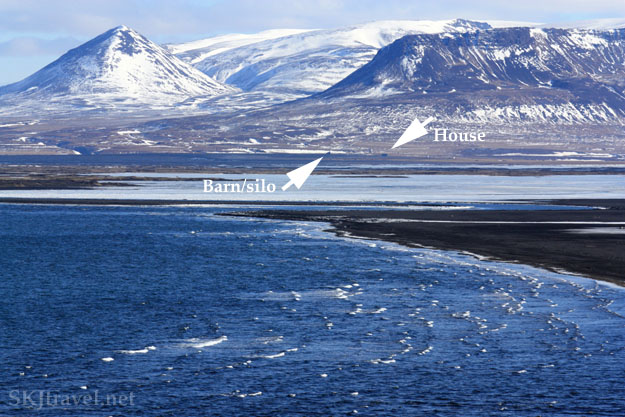 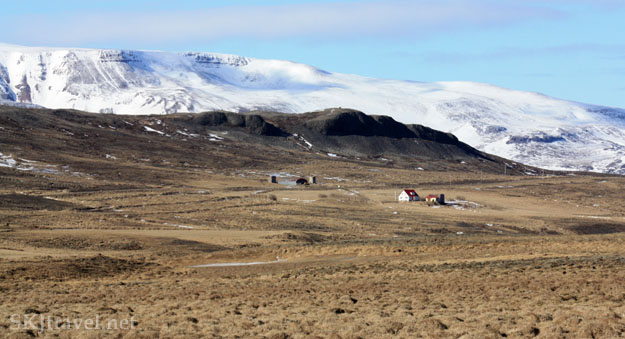 In Iceland, like no place I’ve ever been, a farm or a hotel literally makes a village, at least according to road signs and the paper map we carried. The existence of one or two buildings can warrant a placement on the map. We eventually worked out that many road signs must indicate individual homesteads rather than an actual village. The road sign in the first photo below won’t be appreciated by everyone … but for all you Star Trek fans out there, we found it amusing (a cross with Austin Powers). 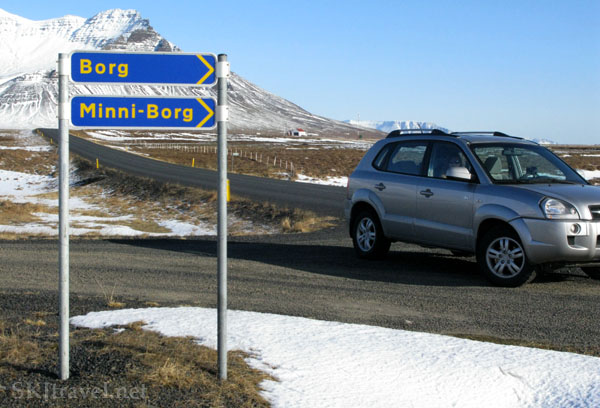 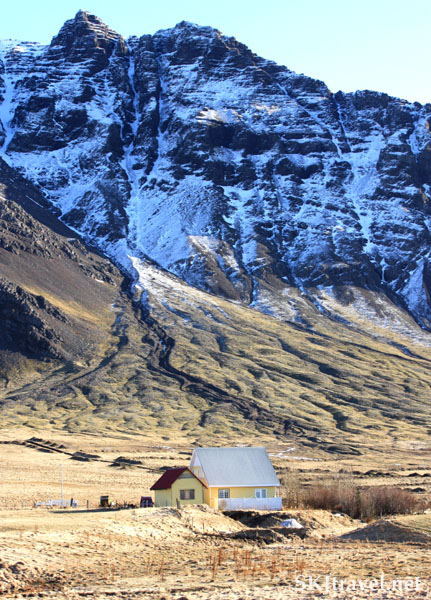 Many of the farm buildings looked rather abandoned, but being winter, I couldn’t really ascertain if they truly were or not, as there was no activity on the farms, regardless. I have a fondness for architectural abandonment as it is – abandoned buildings draw my attention and my emotions more than the inhabited – and the ones in Iceland which had this look were particularly appealing, set in such a vast and empty land. 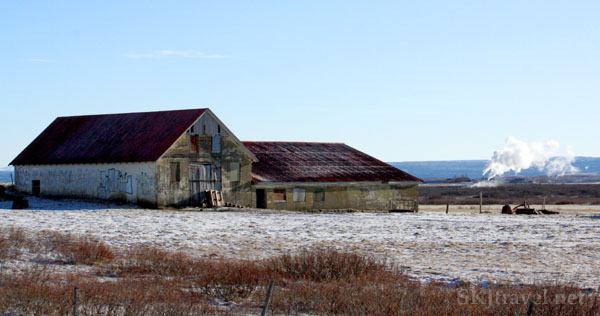 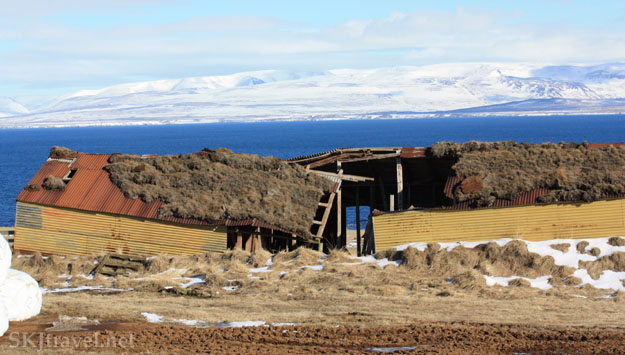 We always catch up on our pop music whenever we rent a car in a foreign country. They’re the most ubiquitous stations, and though we never listen to that kind of thing at home, it’s what we listen to in other countries who have radio reception (we also spend some time with dead air, the places we travel). It comes in handy when we visit a club or something, to be a little current. Icelandic radio stations, however, are often completely random, with an incredible variety of every kind of music on one station. For example, songs from musicals such as The Sound of Music and Mary Poppins backing up to some rock n’ roll song which leads to country, morphing into gospel, then some news, then back to rock n’ roll. Never a dull moment on the radio dial. Well, except when there’s no reception on long empty stretches of road. But I had the astute foresight to bring some CDs with me from home to fill what I anticipated would be some reception voids.

Most of the population outside Reykjavik is found closer to the coastline. We passed through this city (“city” by Icelandic standards) several times on our travels to take advantage of the public toilets (few and far between) and fast food restaurants located in the gas stations (the cheapest food options in the generally fabulously expensive country … pretty much any large gas station also has a fast food joint in it). 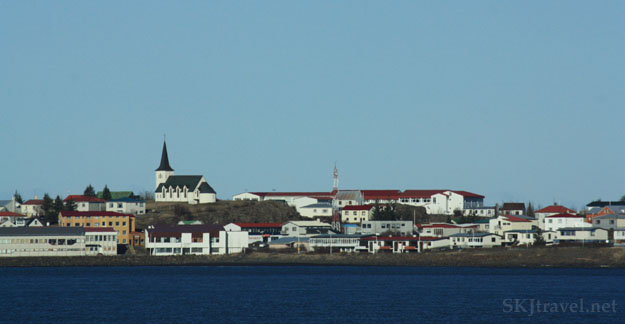 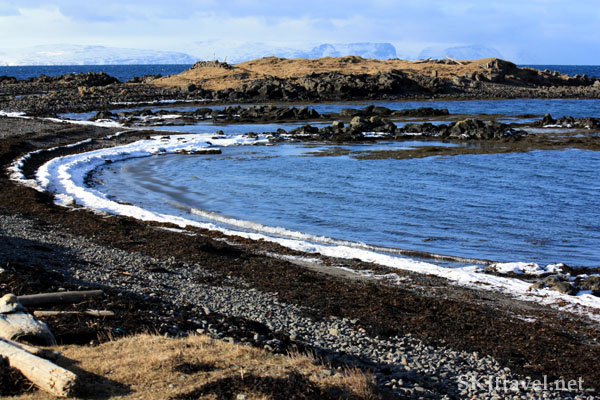 A couple extra shots from our adventures around the Golden Circle (“adventures in water”). First, a lake and island within the Ϸingvellir (Ϸ = “th”) park. After that, a couple shots of the interesting little water streams we were looking at when the Geyser at Geysir came raining down upon us. 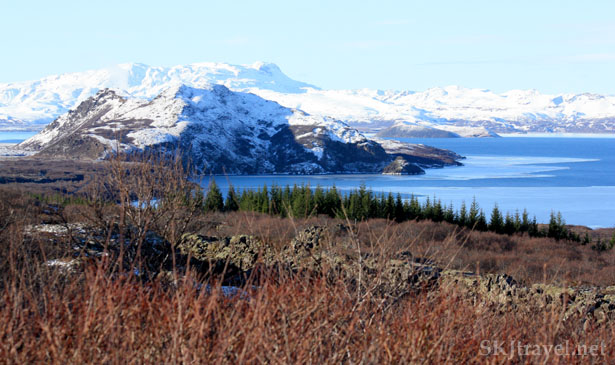 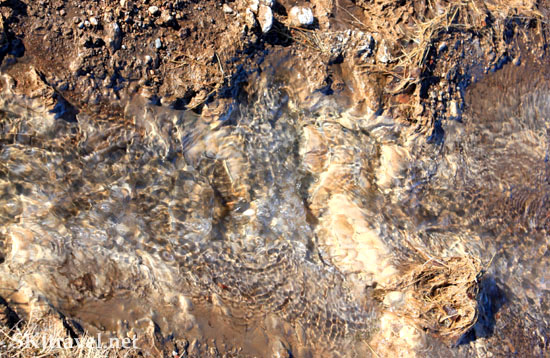 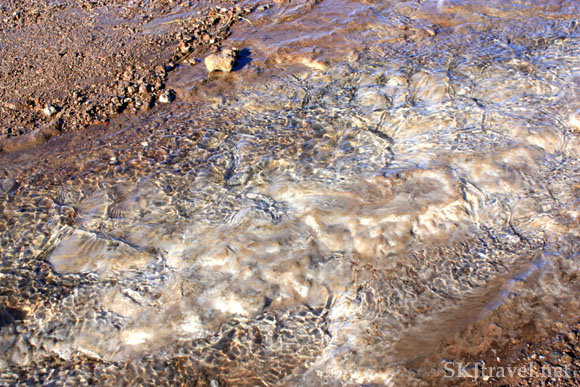 Here’s a full shot of The Church in Reykjavik. It lacks a little pizzazz in the bland gray light, but you get the idea. It towers over the rest of the city. This is the primary landmark in the old part of the city. It’s like the compass for the whole tourist sector. People give you directions in terms of “walk toward the church,” “just north of the church,” etc. 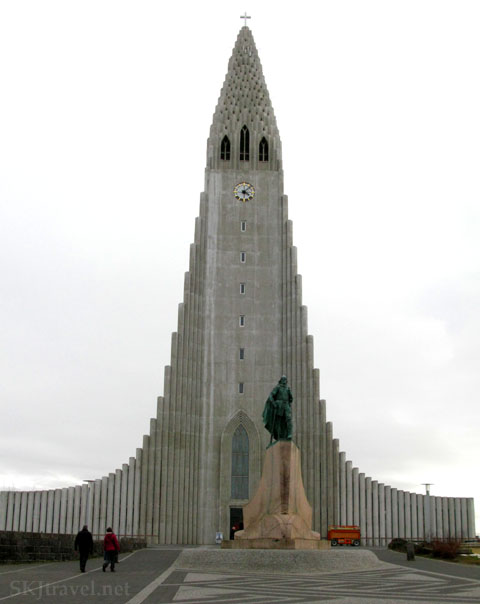 I posted only Erik’s photos of the Northern Lights which we experienced outside Reykjavik on St. Patrick’s Day. Though I was largely disappointed with mine … I came to find out later their dimness/vagueness was largely due to the fact I didn’t think to remove the polarizing lens from my camera … after I got home, I decided some had merit. The first ones I think help give a sense of scale to how much the lights fill the sky (like, completely). You can see a road in the first one, a low range of hills in the second (next to the ski area), our car in the third. After that, a couple with interesting shapes … starting a swirl, and the last one reminds me in some way of a butterfly. The white dots all over are stars. 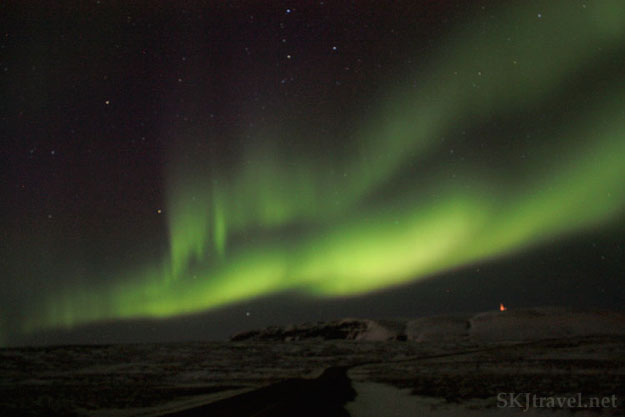 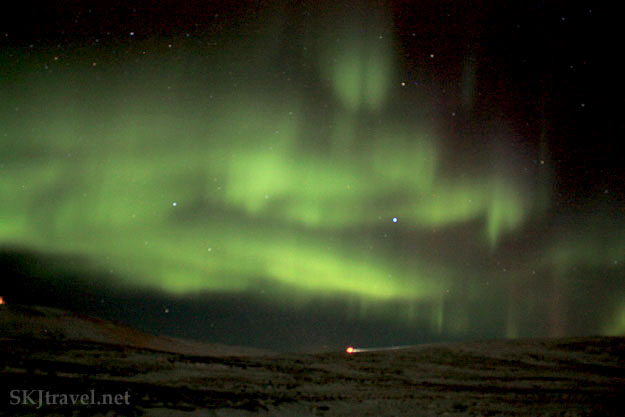 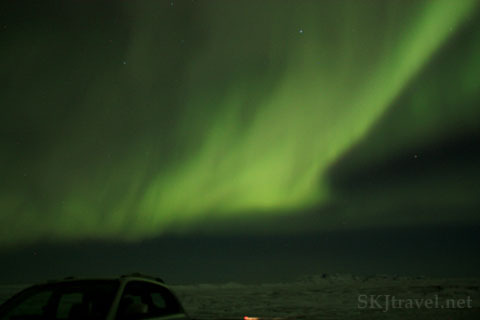 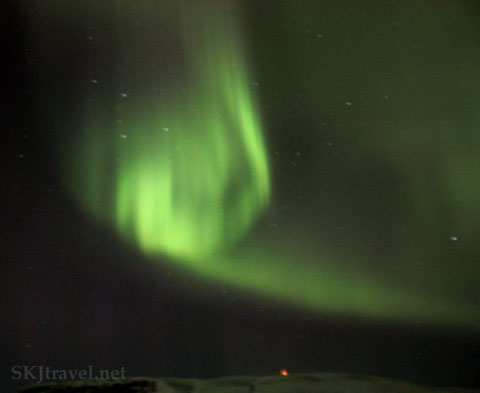 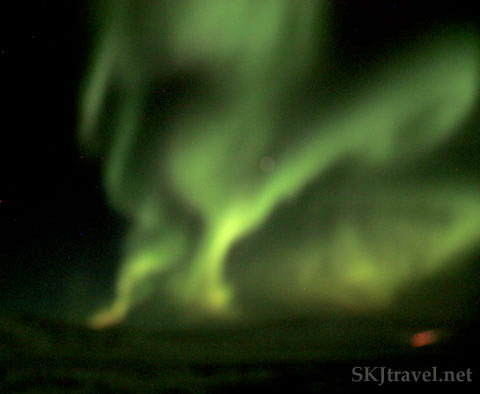 Lastly, I would like to point out one interesting note of Icelandic history … Over and over, when we read plaques in museums or at churches, ruins and sights along the road we stopped to investigate, the hero of the story was very often in fact a heroine. Not through feats of physical strength, rather, Icelandic ladies seem to be very stalwart and determined, and they stick to their guns. In other words, they get things done. A model I can only hope to emulate.

Thanks for following me on yet another remarkable journey. How often do I get to take photos while wearing crampons? How often do I cross a river on a cable wire? Hang out with seals and the prettiest horses? See the Northern Lights?!!  All this and more was mine in Iceland ... a truly wonderful country. 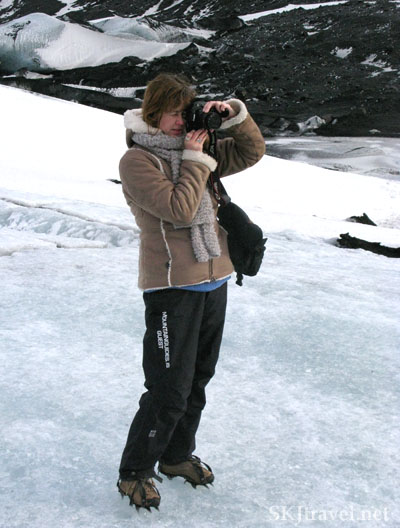