Iceland is a waterfall-lover’s paradise. For as much as I love waterfalls (and it’s very much), I haven’t seen many really big ones in my life. I’m mesmerized by even the smallest. The falls we saw the other day the glacier walk pretty much blew my little mind. But then we went to Gullfoss, managing to arrive before the throngs exiting tour busses. When we arrived, there were a handful of photographers who had climbed over the rope which said the path was closed due to winter conditions (icy). Fortunately they inspired us to do the same. They were all standing around with huge tripods and super fancy cameras, but the lighting was pretty horrendous, half dark shade and half bright, snow-reflected light. I suppose they were trying to get the silky smooth effect of a long exposure, but that didn’t negate the poor lighting. None of my photos came out well, but hopefully they can give you an idea of the scope of the place. 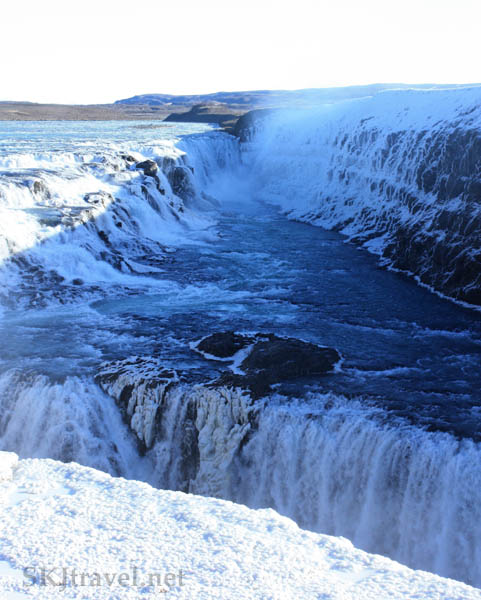 The river starting over the falls. At first glance, it almost looks like snow on the river, but it’s lots of baby rapids making the white in the river, and the banks across the way are covered in snow. 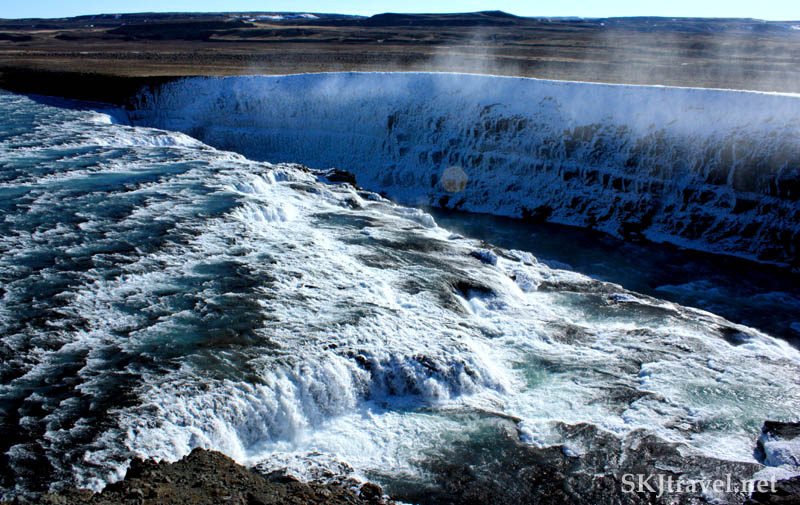 In this photo, you might at first think all the white on the right is also water tumbling over a cliff like the river on the left, but it’s all glassy ice built up on the canyon wall from the spray of the waterfall freezing. 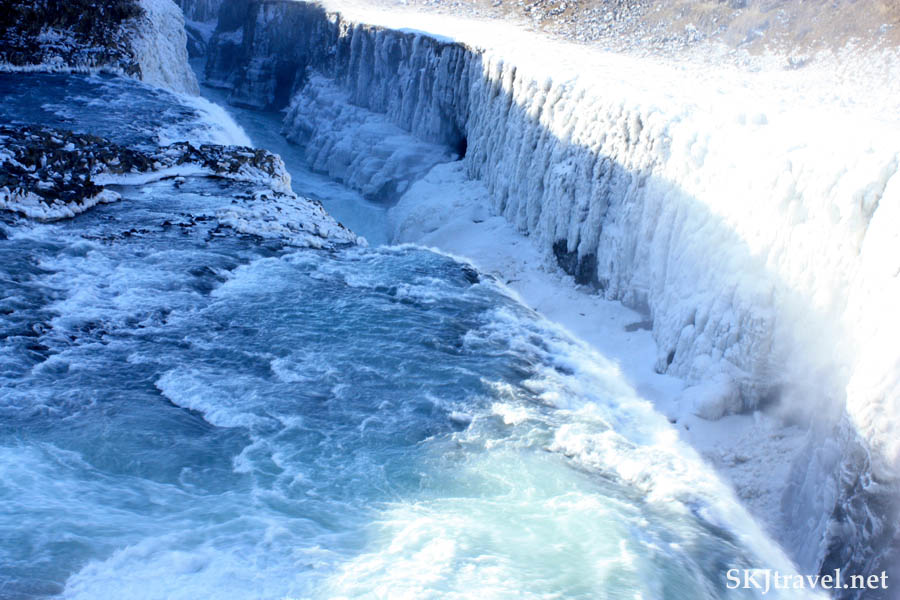 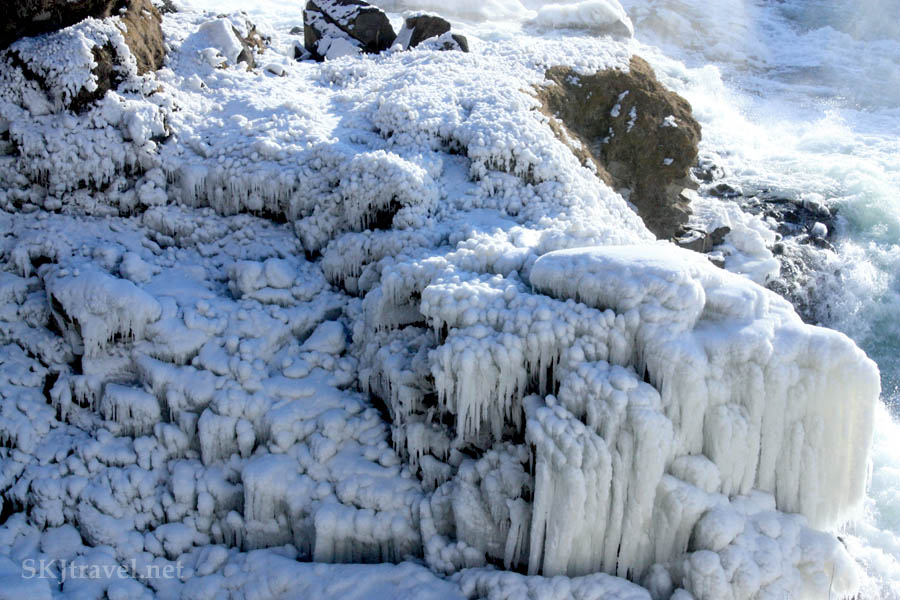 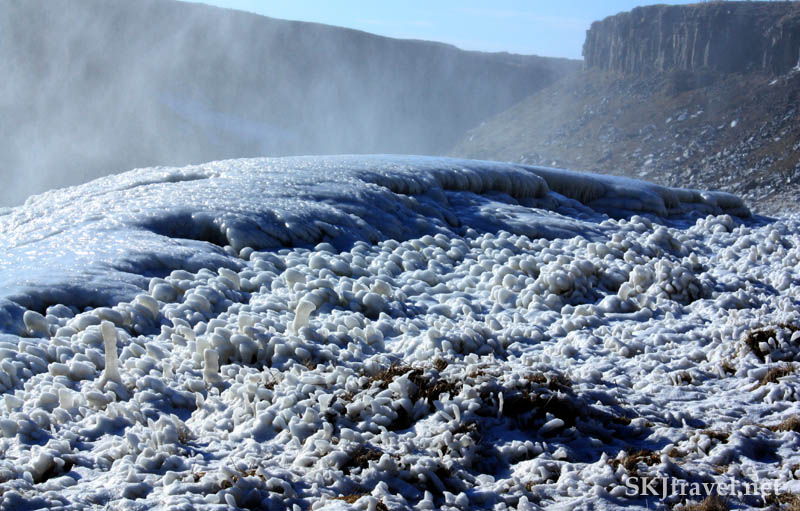 I was literally physically smiling the whole time at Gullfoss, as we walked from one viewpoint to another. 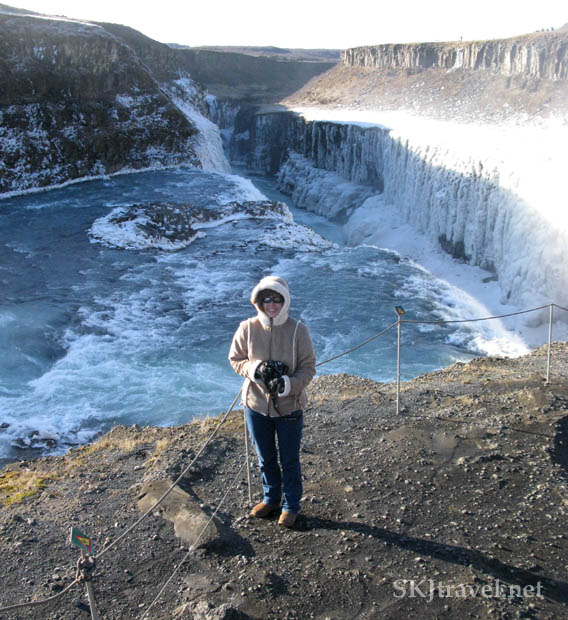 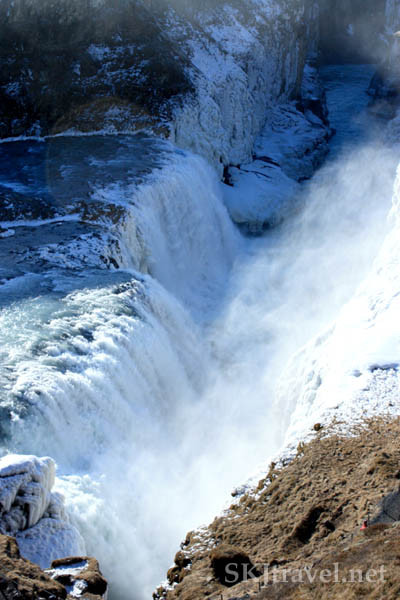 Erik knew he would be lucky to drag me away from there before dark … but luck was on his side. So we drove to Geysir, the location of some spectacular geysers and hot thermal pools. The English word, “geyser,” derives from the Icelandic word, geysir. The biggest one hasn’t erupted to its reputed full height of over 200 feet in several decades. But another one gives a delightful show regularly. Erik and I and another dude were standing near the geyser inspecting the cool patterns the shallow water made running over the soil and stone downwind of the geyser. Suddenly we heard the sound of it erupting and looked up with delight. 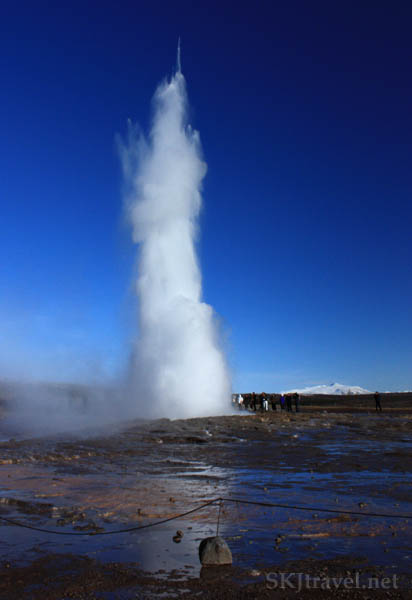 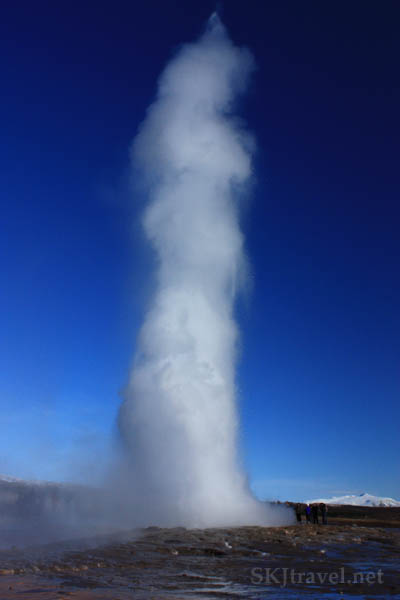 I, and it turns out also Erik and the other guy, was psyched because it was a cold and windy day and as this massive column of steam moved rapidly our way, we all anticipated a nice warm blast sweeping over us. We were all looking up at it, and had a split second to notice the huge droplets of water before they were pelting us with startling force. We turned and ran, and I screamed, but it was too late … the same as if someone had just sprayed us with a garden hose. We were soaked. The three of us were laughing over it, over how we so totally didn’t expect that to happen, when the geyser erupted again. Instinctively we turned to watch it, and then suddenly we realized we were going to get hit with the water again. So we ran, I squealed, the other guy exclaimed, “Shit!” We avoided most of the spray this time, but we could hardly have become more soaked than we already were. 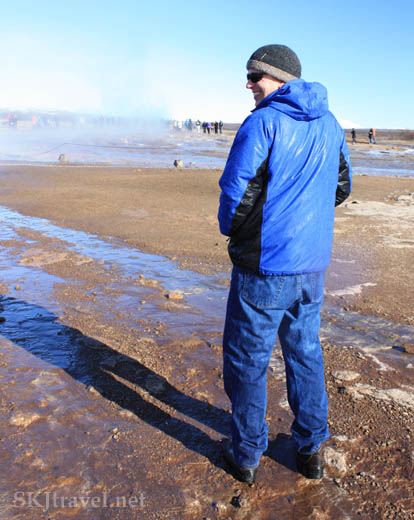 The last stop on what they call The Golden Circle was Ϸingvellir … the site of the first parliamentary assembly in the 900s. This was the seat of the parliament for a long time, where laws were read out loud and the law reader pretty much had the highest authority and settled disputes, etc. A couple hundred years later, they started writing down laws and transferring power away from the reader. This is a church and graveyard now sitting on the site. 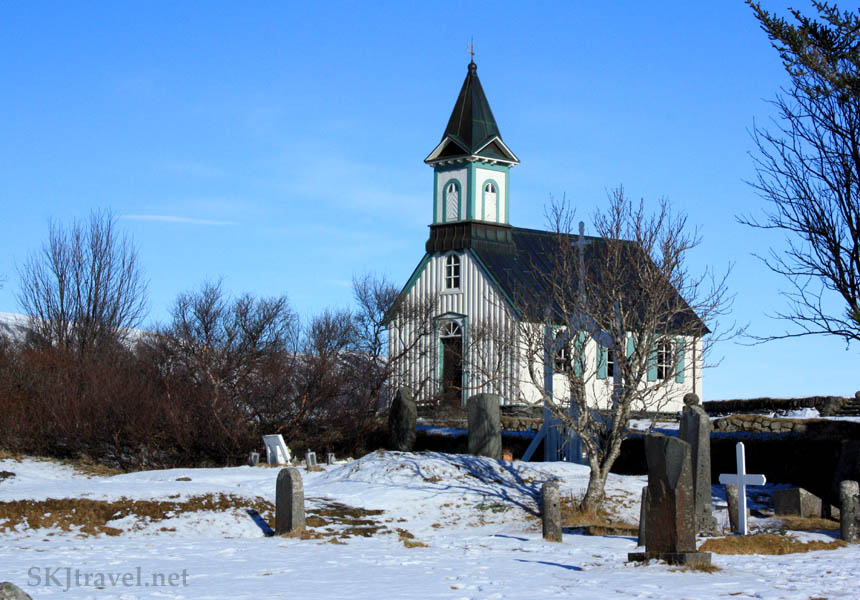 And our last stop of the day, for one more water adventure, was the Blue Lagoon … where we snagged a beer at the most exotic (and expensive) pool bar we’ve had the pleasure of drinking at. The lagoon is basically a byproduct of a geothermal facility. The water is a pale blue color, the bottom is gooey silicone mud, which is also collected in various containers around the lagoon, and people like to smear the mud all over them. Erik was particularly gleeful over squishing it between his fingers. 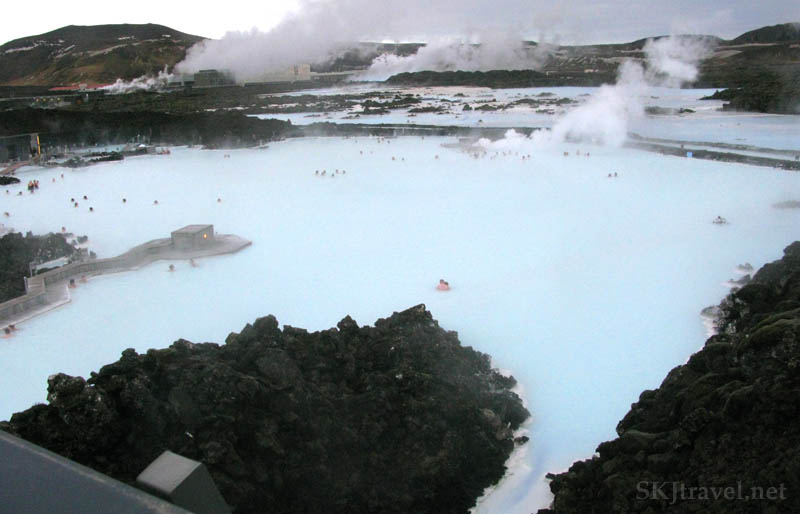 The neatest part was near the steam vent at the far end, where the water temperature was warmer (outside air temp was about 38 degrees F, just above 0 C)  and the steam poured out so copiously at times that a person four feet away from you would be instantly and completely obscured, and you suddenly feel that you are all alone in the world, surrounded by nothing but a veil of steam. When the steam would then blow away in the wind, it was like watching time-lapse photography of a cloudy day … watching clouds move and morph in fast motion. 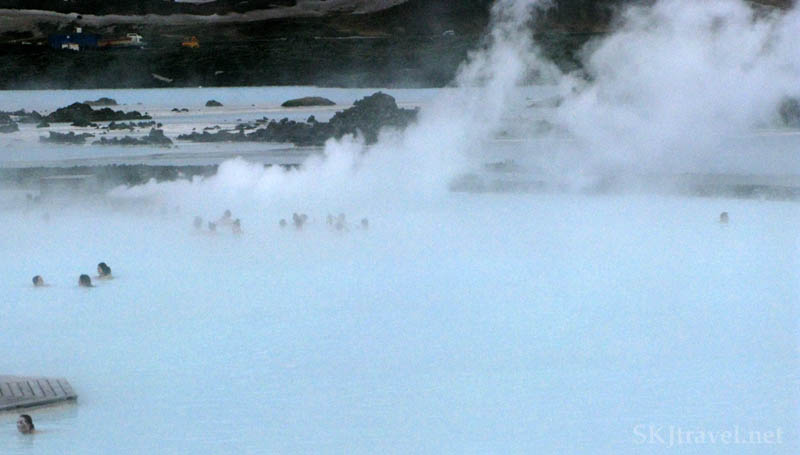 So things are a little backwards here: houses in winter have windows open because of the cheap heat, buildings often just have it running constantly and tenants need to open the windows sometimes (as we have in our hotel a couple nights); on the other hand, employees at a geothermal HOT springs are wearing heavy down coats because the air temperature is soooo cold. It’s just funny to swim up to the pool bar and have the bartender be working in her fur-lined parka, handing a cold beer to you in your swimsuit.

Lots more to come! Am falling behind on the real-time ... I forget that when traveling with another person, evening time is typically not so open for making posts on a travel blog. Northern lights, wild seals ... stay tuned. :-)