Spoonbills Don't Know How to Spoon

Once again the little lagoon pulled me to it like a magnet. I meandered down there for another look at the critters. This day, rather arbitrarily, I was determined to get some shots of the spoonbill birds. They are so difficult to nab a picture of because they typically sequester themselves deep inside the leafy branches of the trees. So not only are they covered up by the leaves, but I have a terrible time making the camera understand I want to focus on the bits of bird, not on the leaves. 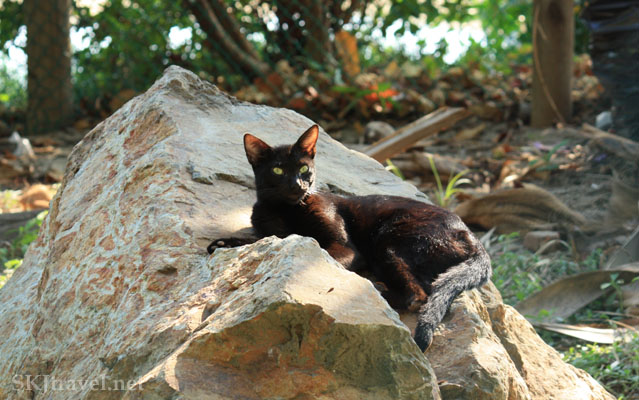 Last year I saw so many iguanas (see pics); this year not so many, but I did run across a few who were finishing up the cabbage that had recently been thrown to them. I love these shots of their little red tongues. Don’t know why. I seem to find animal tongues amusing when they are visible. 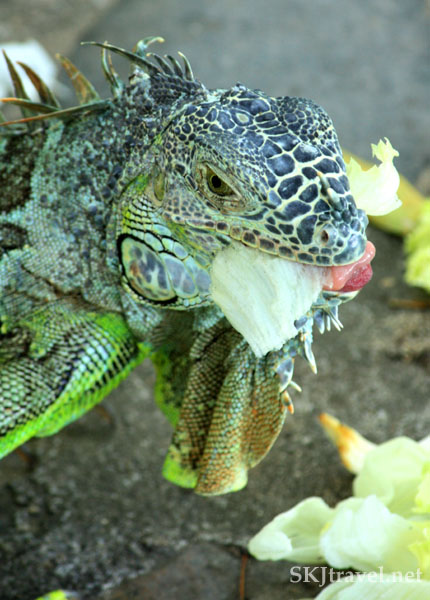 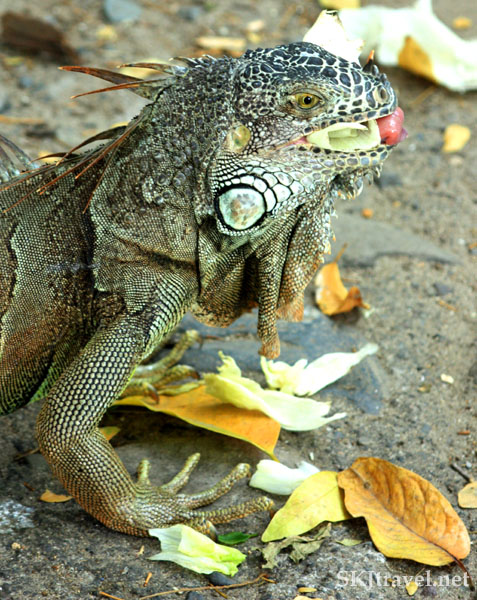 I finally spotted two spoonbills, nestled up in the branches as usual. I tried calling to them, naturally to no avail, but sometimes you just can’t help trying. I had to be back to the hotel for dinner and time was flying by as I stood with my eye to the camera, finger on the button, for minutes on end waiting for them to reposition themselves so I could see them more clearly. I particularly wanted a shot of them flying, with their wings open, as they are gorgeous when spread out. Tick tock tick tock. Stupid birds aren’t moving, except occasionally to obscure themselves even more. Tick tock. Just about to throw in the towel, but am loathe to give up with nothing to show for my time. Tick … finally my stubbornness paid off. First one flew into view and sang a little solo. It then flew to another branch, but amazingly I could still see it, and then its mate flew to its side. 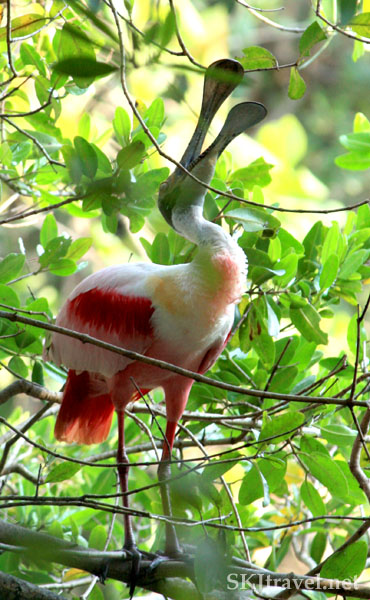 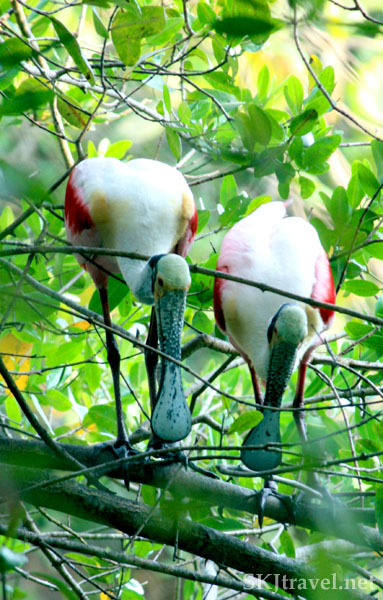 I was pleased with this development. Then the one bird, I presumed a male, abruptly up and freaked out, flapping wildly. He landed on what I presumed is a female, and put his beak around hers. It took me a minute to process what was going on. Then I was thinking, “Dude, you have it a little wrong … that's not quite how you spoon. Your breaks don't go perpendicular." 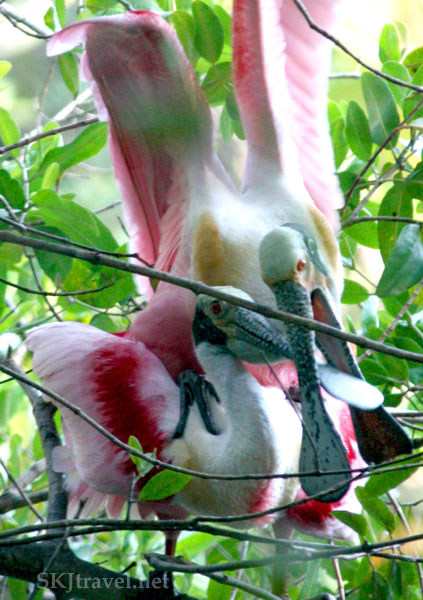 But the silly bird persisted and started biting her whole head. The poor lass just stood there and took it, most of the time keeping her nictitating membranes closed over her eyes to prevent damage. I have to say, I’m surprised the spoonbill isn’t a little more adept at “spooning.” Ha ha. I guess that's the way it goes in a lot of nature. 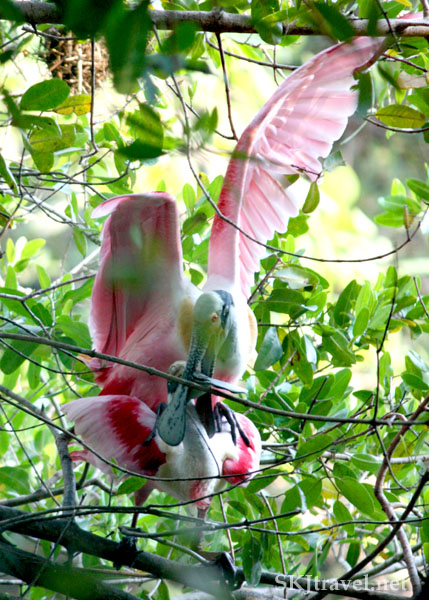 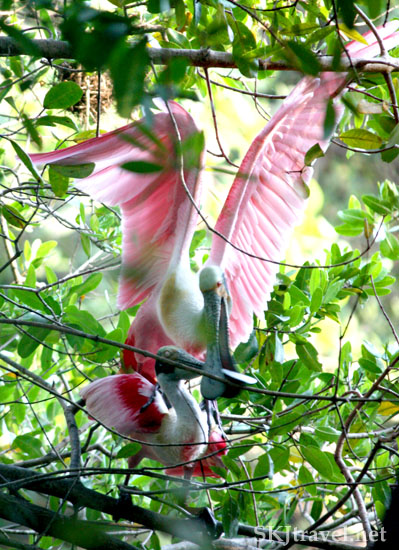 Well, at last I was satisfied and walked back home along the beach. Itty bitty tiny crabs had come out by the dozens to skitter across the sand. I kept a brisk pace with them to make it back in time for strawberry margaritas with the family. Oh, that reminds me, I made the taxi driver who took us to Petatlan laugh when I took a photo of the menu at the place where we ate lunch (where I tried the star fruit). But it was so interesting to me ... you just would be hard-pressed to find a menu like this at a typical Mexican restaurant in America. Especially the last item ... 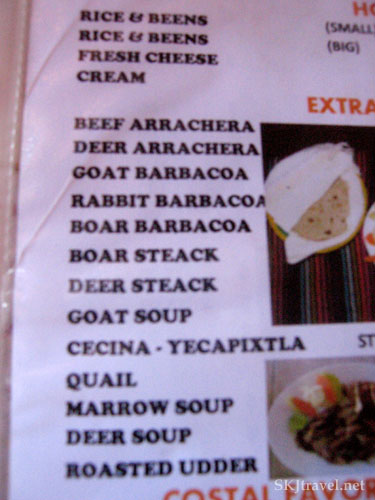 And so ends another relaxing week in Ixtapa. (all indications are that I will be back next year) Some early morning clouds behind Ixtapa Island (where I got bit by the school of fish) and a couple sunsets to close. 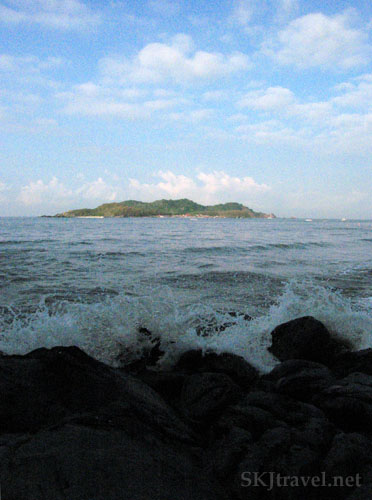 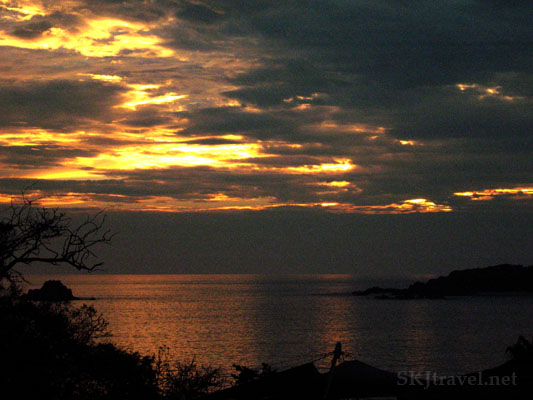 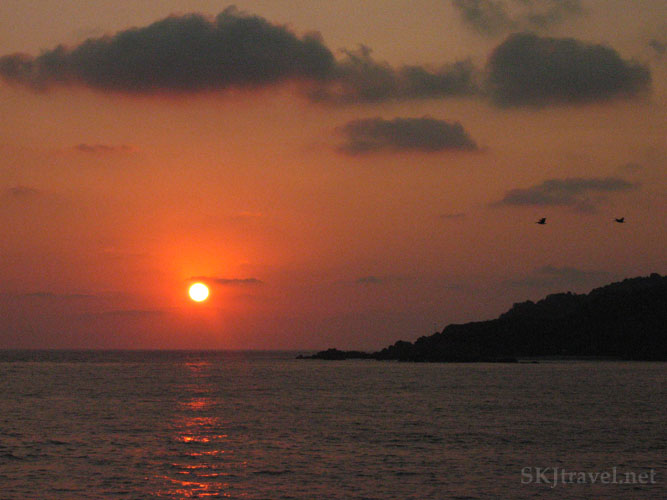