Today I strolled over to the reserve in the afternoon by myself. I don’t even have to put shoes on to check it out. I walk down the sand beach, and I can walk along the reserve fence in my bare feet. There’s a strange satisfaction in having such a good time in bare feet … it doesn’t happen all that often, you know, except at family barbecues and days at the beach, but there I was watching crocodiles and spoonbill birds with my camera glued to my eyeball in bare feet. I don’t know how to explain why this makes me feel so content. 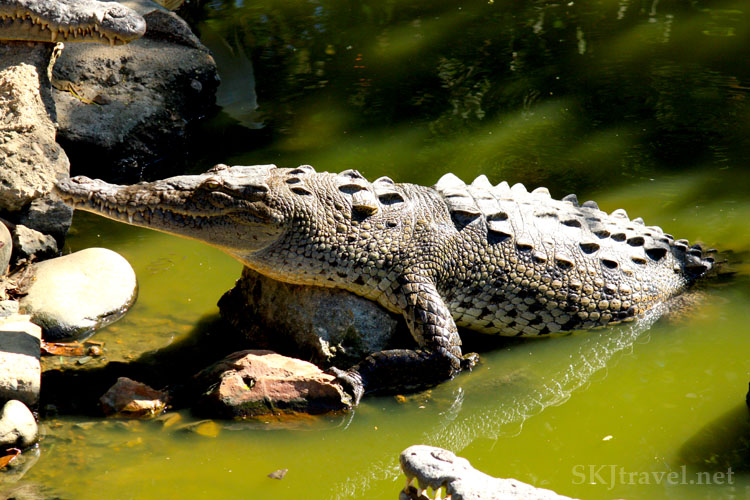 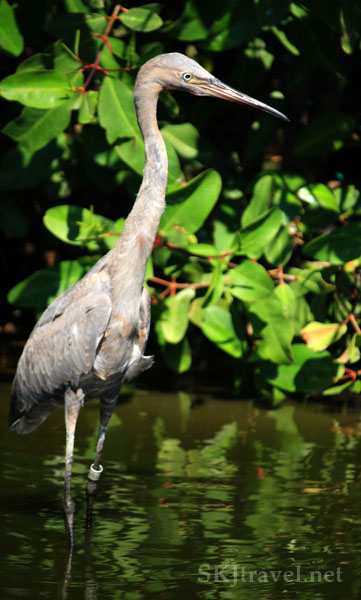 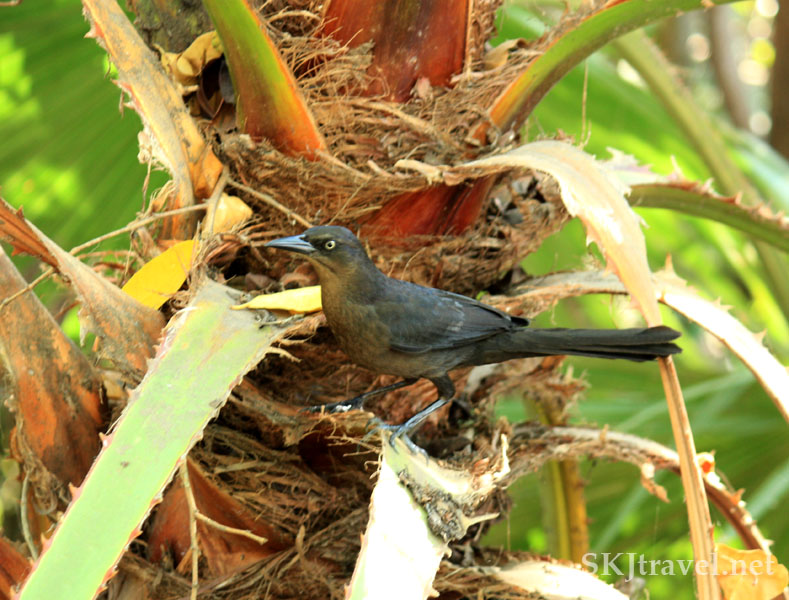 There were several interesting events today. When I arrived at the reserve, I counted 27 crocodiles jammed against the perimeter fence, together in one big pack. Made me wonder what’s the most that have been crammed into one spot like that. 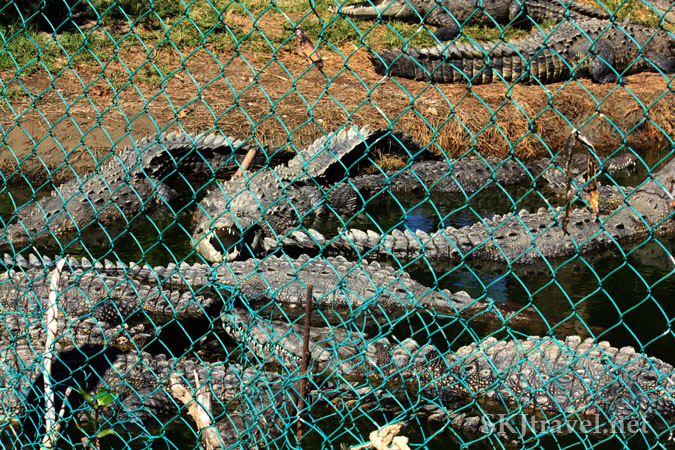 I witnessed an iguana chase through the tree tops. An adult orange one chasing a young green one … up one tree trunk to the highest branches, down the branches, jump across to another tree, dislodge a rainshower of leaves onto the ground and human observers, run through the leaves on the uppermost branches and jump to the next tree … eventually the large iguana fell off a tree limb and made a terrific kerplunk in the water, from which he immediately high-tailed it out of there. A local standing nearby answered a questioning tourist, “Yes, the crocodiles will eat iguanas. They eat anything except the turtles.” 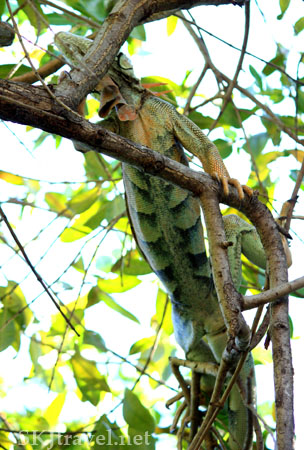 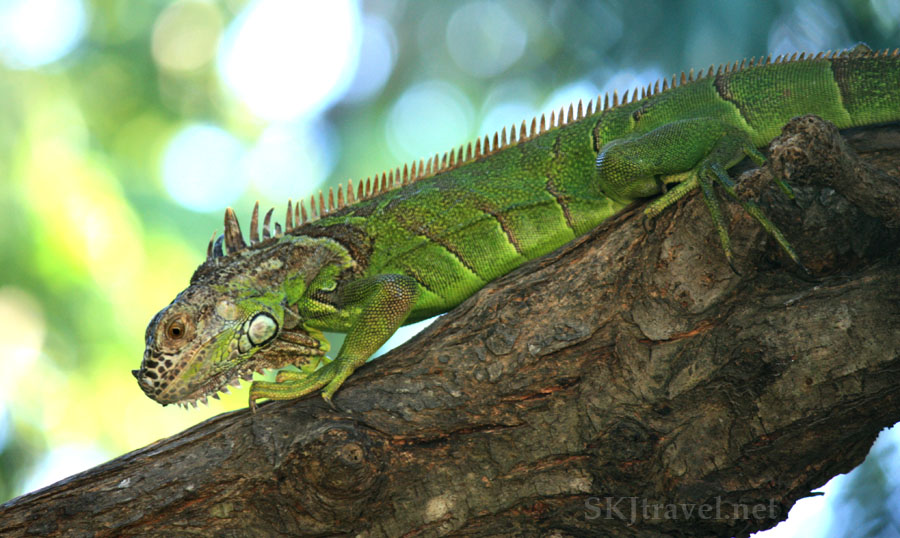 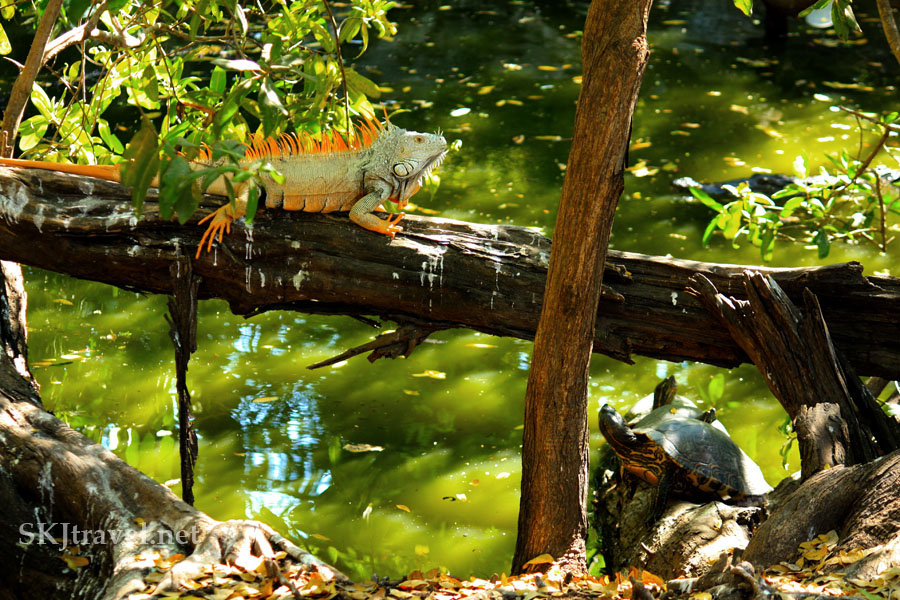 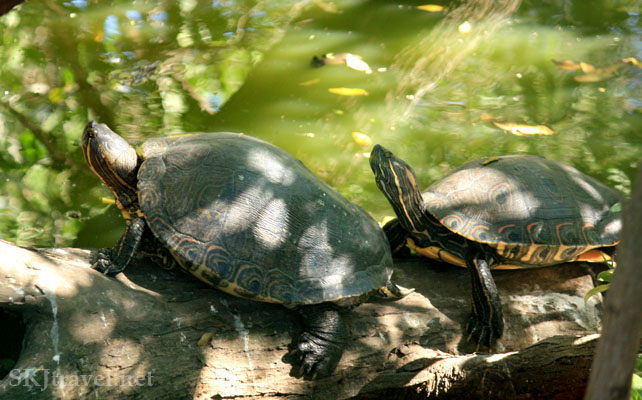 The reserve is a very small stretch of viewing area, yet I managed to let over 2 hours fly by while I watched the daily drama of this primeval lagoon. I was impressed by this last year, the Jurassic feel of the place, void of mammals, only reptiles and birds.

Well, except for a couple of kitty cats. This little black kitty cat was carelessly investigating the weeds where the crocodiles lay. And this is true:  he was limping on 3 legs as one them was missing a foot … it had obviously gotten munched off, and yet there he was still meandering among the murderers. 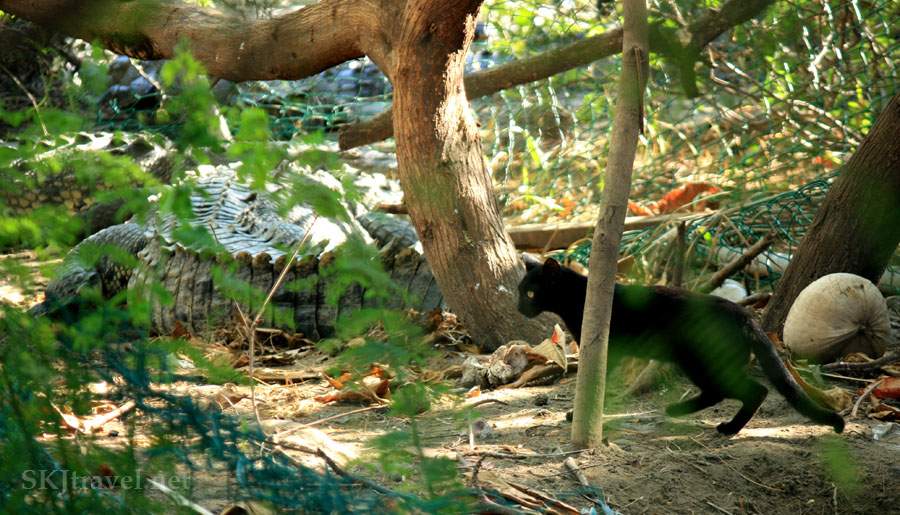 Not more than 10 minutes later, I heard a great splash and kerfuffle; I swiveled my head around to see one of the large white egrets inside a croc’s mouth, its white feathers streaked with blood, being tossed up in the air over and over as the croc crunched it up a little more with each landing. He hadn’t even finished with the bird before another croc surfaced in the middle of the lagoon tossing a positively giant, flopping fish around in its mouth. And there that silly little kitty came into view again just behind the crocs who were obviously starting to feel a bit peckish. 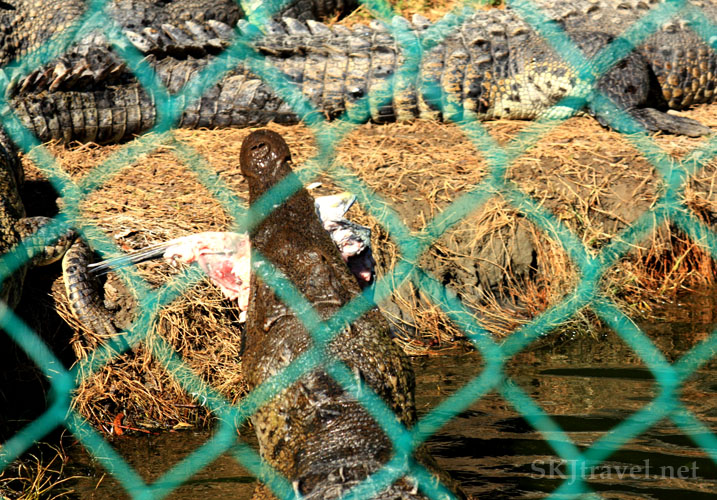 I had been standing at the perimeter fence where I’d counted the 27 crocodiles to watch the bird and the fish get eaten, and when I saw the kitty coming through the jungle again, I decided to go back around the corner to where I could get a shot of her through the chain link fence. After putsing around back there for a little while and meeting another, more sensible kitty, I came back around to the beach-side perimeter and saw a police car pull up. 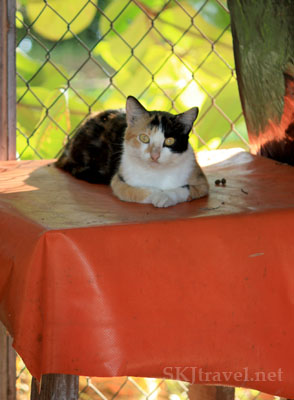 Two officers got out, AK-47s slung over their shoulders. I wondered what dramatic situation had popped up during the few minutes of my absence. But they didn’t confront any people, they seemed to be just standing around. OK, maybe they were on break, I thought. Then I saw it. A crocodile had just escaped and was walking down the beach toward the ocean. 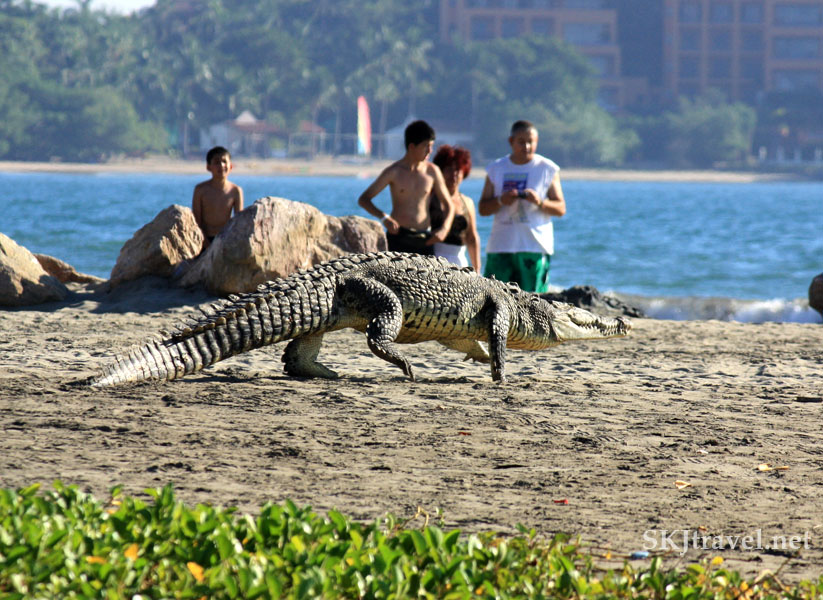 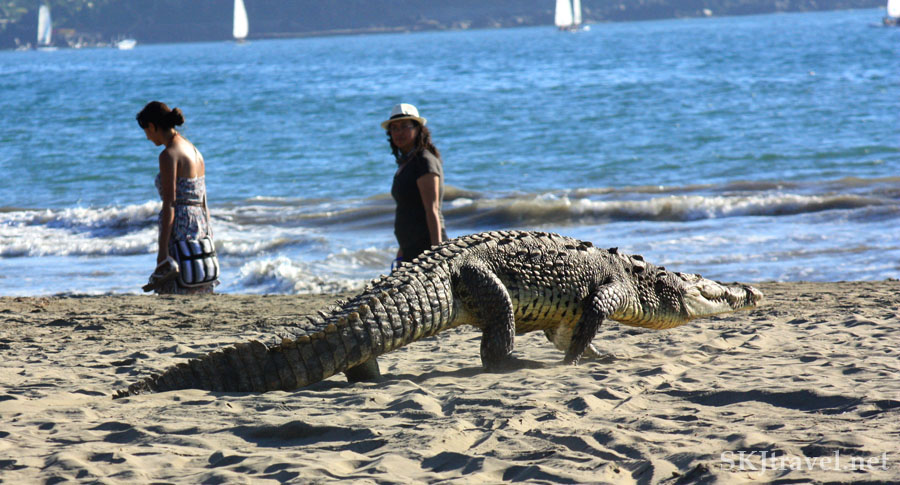 We had heard they sometimes escape and swim out in the water freaking the living daylights out of swimmers and kayakers. Sure enough, they’re not making it up. There was one right there. Nobody seemed the least bit concerned. One of the policemen even motioned me to come closer to the croc to get a photo. The locals seemed unconcerned as well. So he walked down aways and then just laid down on his tummy and chilled. I have no idea how they get the escapees back inside the fence. 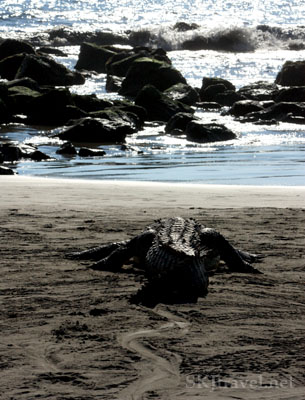 Took a little kayak trip out to an island across the bay and did some snorkeling. Some lovely fish and small stretches of decent coral. A school of small, narrow, brightly-colored magenta and yellow fish started swarming around me about an inch away from my mask and my body. I though it was pretty neat and suddenly I started feeling little nips on my arms and legs. They were biting me! Well, tomorrow I'm taking a little day trip to a nearby town, to get off base for a little while. Meanwhile the daiquiris and negra modelos are going down smoothly by the quart. ha ha (staying at an all-inclusive). 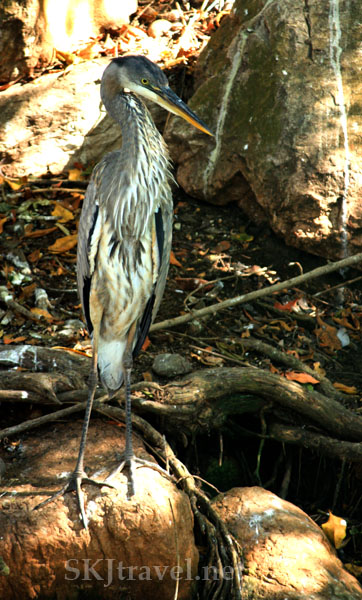 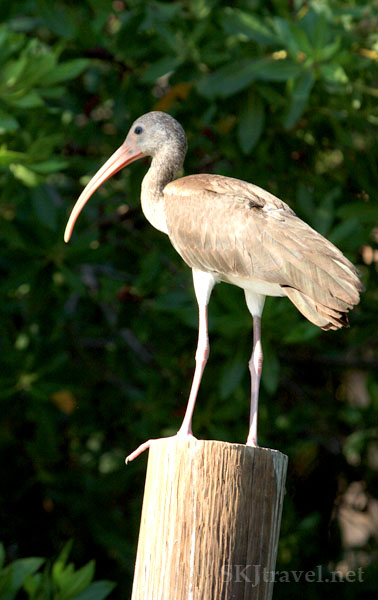 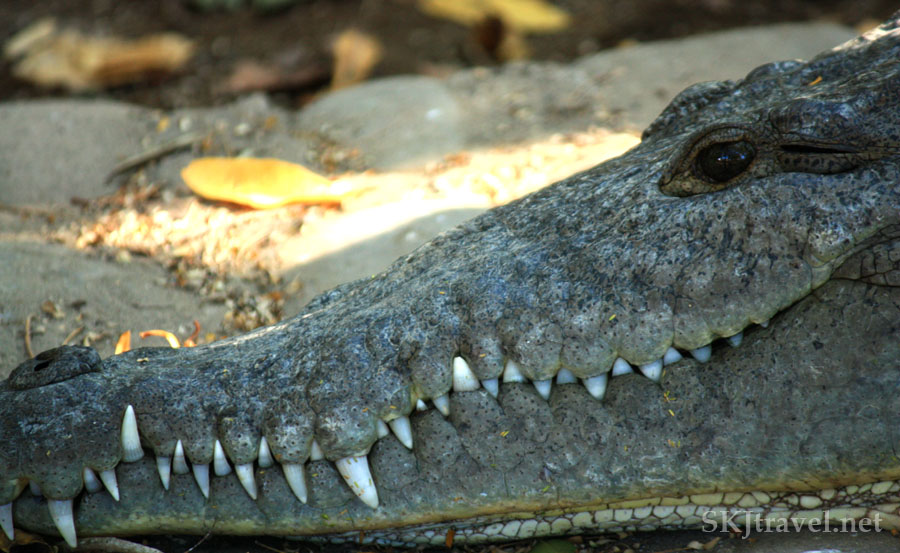 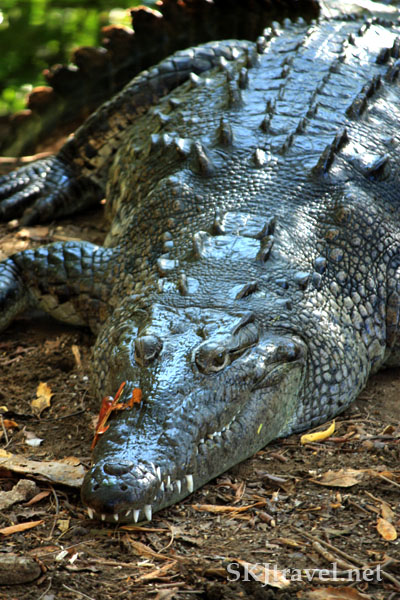 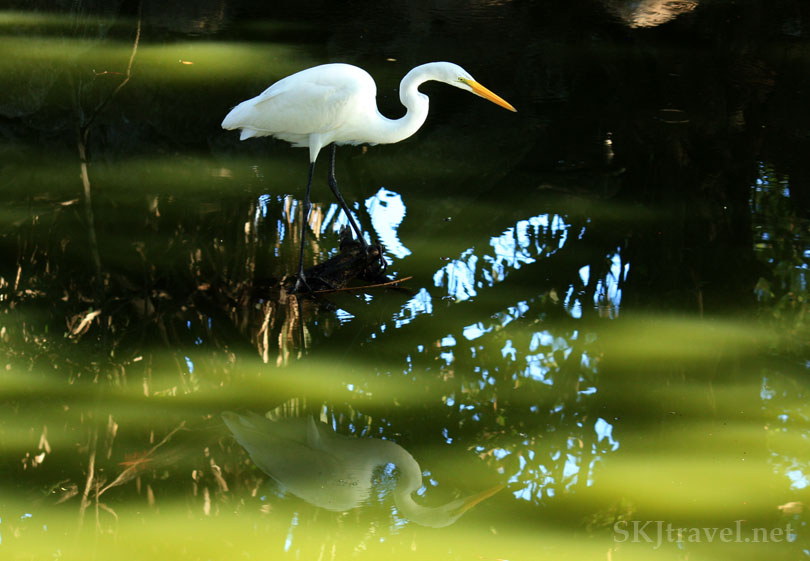