This episode happened during my time as a volunteer researcher and ethnographic writer in a tiny peasant village in Shaanxi Province, China. You can read extensive essays about the village in Travel Essays.

Once during my second visit to the village, our “usual group” (the four volunteers plus the regular retinue of four or five kids) stood outside the Dang family courtyard early in the morning, waiting for breakfast to be ready.  The sun hadn’t yet cleared the eastern horizon, and we stood in the shadow of a thousand hills and valleys, all waiting to be touched by the dawn.  Back home in Colorado, it had already pulled the dew from the roses and pansies and the mat of pine needles in my yard hours ago.  While we were standing outside the courtyard, Papa came walking up the path with a dead tree.  It was thin, with only a few branches, about eight feet tall.  He was going to hack it down into smaller chunks for firewood.  Mostly because we were in his way, he stopped at our group and held the dead tree upright while he stood.  Cao-Yu suddenly said, “Oh, a Christmas tree!”

You should understand what an unlikely thing that is for a peasant girl in China to say. I realized, she had learned about Christmas trees from the Western volunteers who had come to her village for the past two summers.

Except for a handful of recent Christian converts, Chinese people don’t celebrate Christmas. Religion is no longer outlawed in China.  Mao’s famous belief that “religion is poison” is not, however, altogether in discord with the current government.  While Christianity or any religion isn’t denied by law, the Communist Party still tries to keep it at arm’s length from its people. As an example, in his book Rivertown, Peter Hessler talks about how, when he was a Peace Corp English teacher in China, the Communist Party’s presence at the university made it clear that he was not allowed to have his students sing Christmas carols as a lesson in American culture—not even “We Wish You A Merry Christmas,” which has no religious meaning at all.

But I can understand a certain wariness of the Western phenomenon of Christianity.  Christian missionaries have played a terribly destructive role in China’s past, culminating in the Boxer Rebellion, which was ultimately the biggest precipitate to the overthrow of the Qing Dynasty.  Much of the “foreign devil” sentiment in China stems directly from the Christian missionaries who, as part of the Opium War concessions, were absolved of any allegiance to Chinese law or morality, and whose converts were primarily thieves and thugs, since “diplomatic immunity” was extended to all Christian converts as well.  But the Communist government also caps the number of monks that can live in Buddhist monasteries in Tibet, for these places have traditionally been bastions of political resistance.  Monks must also now sign a statement declaring they do not support the Dali Lama.

So it was such a random thing for Cao-Yu to say; it made everyone laugh.  I took off my bracelet and hung it on a branch and said, "Christmas tree!"  It took a minute for it to catch on that I was decorating it, and I was just about to retract my bracelet and consider my gesture lost, when Wei took off a bracelet he was wearing and put it on a branch.  Then it was a mad rush of everyone else stripping off their bracelets and necklaces, and Qi-Wei took off his eyeglasses, to hang on the branches.  Cao-Yu then adamantly wanted everyone to hold hands and walk in a circle around the tree.

So we played out this strange, surreal scene on the hillside of a tiny traditional village nestled into the Loess Plateau of China:  Papa stood holding a dead tree with our belongings dripping from its limbs—no one had translated into Chinese for him why we were doing these nonsensical things, so he stood laughing and bewildered as a group of village children and adult foreigners held hands and walked a circle around him.  Little Lei-Lei didn’t understand what was going on either but was perfectly eager to play along with everyone else.  After a time, I said, “Well if it's Christmas, we need to sing Christmas carols!”  So I started singing “Jingle Bells” and everyone caught on quickly to the tune and starting singing along with “la-la-la.”

We started moving faster in our circling, and then someone suddenly switched directions so everyone bumped into each other. The kids thought that was hilarious, so as we walked in circles, they kept switching directions maniacally, and soon we were running around the tree rather than walking, and it was a chaos of giggling and screaming. Then, thinking of my childhood dancing around May Poles in the spring, I pulled everyone in toward the tree while we kept our hands held together and raised them straight up over our heads as we closed in upon poor Papa. We lowered our arms as we backed away and stretched out our circle until everyone’s arms were fully extended.  Again we closed in together; our voices swelled as we came in toward the tree, “Whooooa,” rising in pitch until we reached the apex, pressed against Papa and each other, arms straight above our heads, and then we yelled, “OH!” Keeping hands clasped, we spread back out, still walking in a circle.

In and out, “Whooa-OH,” over and over until breakfast was ready.

I don’t know in whose mind that scene will remain longer – mine, or poor bewildered Papa’s.

I don't have a photo of this incident, but here are some of the children involved in the tree-circling mayhem. Cao-Yu in the yellow shirt to my right, Lei-Lei in front. 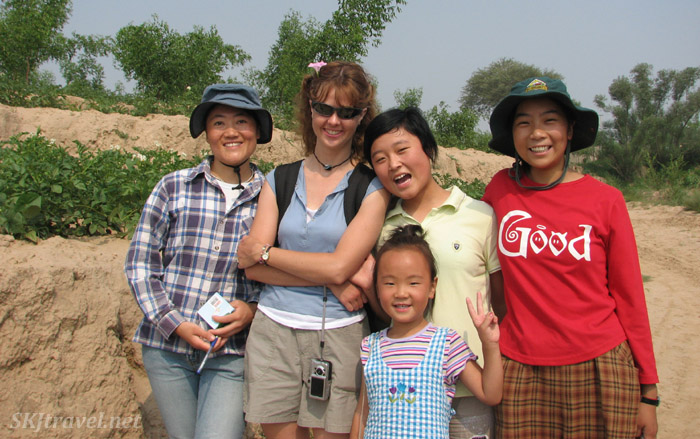 Me and dear Papa Dang. My second papa. 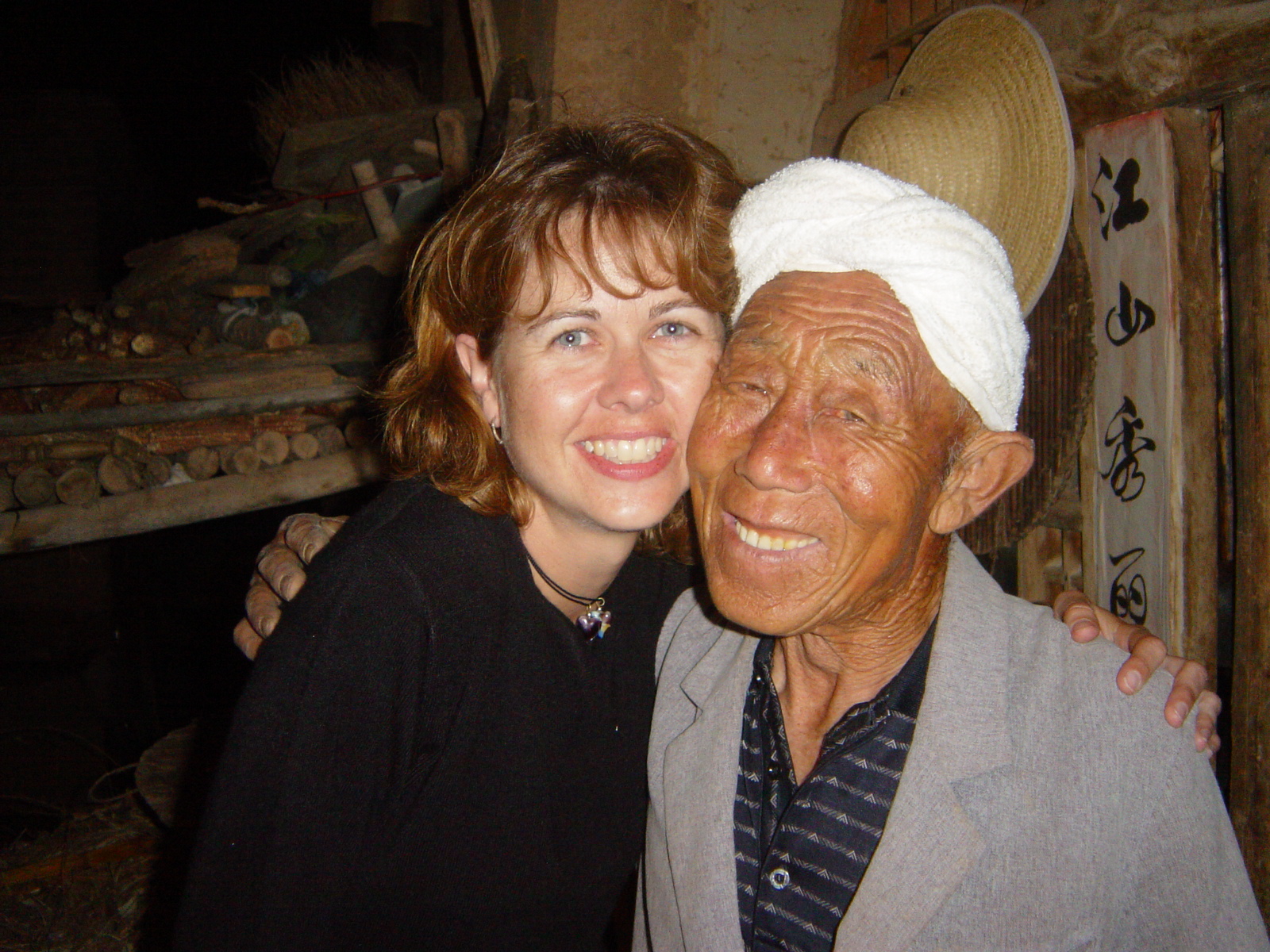