It's a shame one can't bring back fruit into the united states.  When we left the village (the name of the village is Dang Jiashan), the villagers loaded us up with enormous quantities of dates, something they grow there in the village.  It was so sweet.  They came out with a huge basket of them and started dishing them out.  I don't even like dates, but I know how they operate with their generosity.  So when Anju, Anrong's brother, started shoving dates at me, I just opened up a pocket in my pants, thinking this way, I couldn't carry too many.  So he stuffed my pocket to the very maximum, and then he went around back, unzipped my daypack and just poured in dates.  There's no way to tell these people you don't like something or don't want anymore.  They just think you're being polite and they are determined to overcome that.  So everyone else was loaded with dates, too.  I feel horrible that they all went to waste because I can't bring them back home. We all left them in our hotel room. Also the village women sewed little gifts for us before we left.  It is true that we presented them all with a variety of small gifts during our stay, however, mostly we just followed them around all day, asked questions of them incessantly, stuck our cameras in their faces without mercy, added to their already hard work load by having them fix three meals a day of their finest food for 10 people, added to their work by having to carry extra buckets of water up from the spring to fill our water jars so we could wash our hands and faces, plus they boiled water for us every day to drink, worried and fretted are we too hot? too cold?  should they heat the kang?  don't we need an umbrella to block the sun?  would you like this or that?  And then they sewed little pouches for us to ward off evil and loaded us down with dates.  It makes one sigh.  We'll miss you! they said. 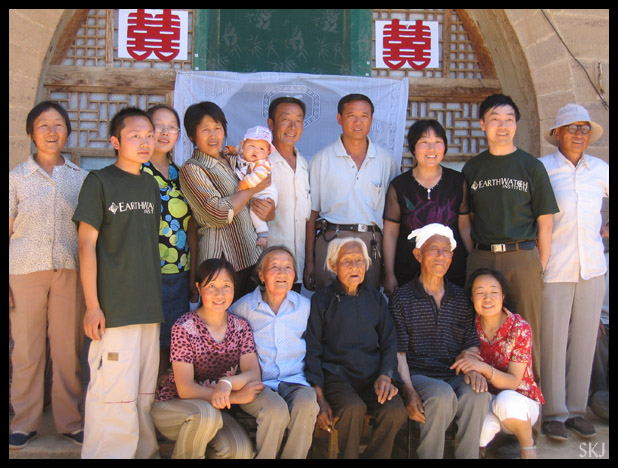 So here's an interesting bit of folk medicine.  Jiang Lu, one of the principal investigators, got bit by a scorpion one night.  We didn't actually know what it was, but after a sharp pain on her hand, it immediately started swelling and the swelling and pain moved up her arm at an alarming rate, so one of the volunteers took her up to Anrong's parents' house.  They knew immediately what had happened and brought out the cure:  scorpion juice.  They presented a jar of scorpions (dead) that had been steeped in liquor.  A very creepy little jar.  But then they applied the "juice" to the sting, and the swelling and pain began to recede within a minute.  She applied it several more times over the evening and by the next day it was fine.  Meanwhile, the father came down to our cave to look for the scorpion.  He drew a picture in the dirt for me with his finger of a scorpion, (a very good picture!) and then pointed to the tail and then stuck his fingernail into my arm to indicate what had happened to Jiang.  Two days later he presented Jiang with a piece of paper on which he had drawn with a pencil a bunch of scorpions.  He has a cute humor.

But certainly the biggest health risk in China, I think, is that of automobile accidents.  It seems like almost every other country in the world drives much crazier than Americans.  Until now the most hair-raising adventures I’ve had have been in Central America, but other people have told me incredibly hair-raising tales from other countries.  But in my experience, China takes the cake.  I've only seen maybe 4 or so accidents in my month here (with only a handful of days actually driving anywhere), but I can't believe the roads aren't littered with them.  The day we drove from our village in a minivan to the local township some ways away, the "road" we were on was just a swath of dirt cleared of plant life, wholly pitted with holes and muddy bogs.  I would have been hesitant to take the 4-Runner over it.  But there we are bouncing along in this minivan.  We hit our heads on the ceiling of the van several times while plowing over bumps and our insides felt like they were hemorrhaging.  But this wasn't enough for the driver who insisted on racing with a local bus.  However bad it was in the minivan, I am so glad I was not on that bus!!  Our driver and bus driver were dead set on getting in front of the other one.  So anytime the road widened out enough to where two cars could fit side by side, whoever was in back at that time would pull out beside the other vehicle and we'd be racing side by side over this 4-wheel drive road.  It was hot and there was no AC, so we had to have the windows rolled down.  We couldn't even have conversation because if you opened your mouth, you would eat a healthy serving of dirt.  Several times the bus stopped to pick up passengers waiting along the "road" in the middle of nowhere.  And I'd think, oh good we'll lose him now.  But a few minutes later, there's the bus up alongside us.  We would get slowed down from time to time in the mud pits with the driver slipping the clutch trying navigate through.  There are zero cars in the village we lived in, so the paths there are not built for them.  That was another adventure trying to drive these minivans up near our caves to load/unload our luggage.  After the first try, we were so scared we all jumped out of the van.  But the driver managed.  Also when we arrived at the village for the first time, we were escorted by the officials of the Yulin City government, and they're trying to drive their wimpy little cars up there, too. It was a bit of a spectacle.

Until recently, the big entertainment in the villages of northern Shaanxi was the blind men.  Anrong recalls this from his childhood with fondness.  One of them came while we were in the village.  Anrong said this guy wasn't very good.  Because people are getting televisions and radios, the blind men are not so popular and so don't get much practice.  But the government actually trains blind people to play instruments and then they go around from village to village and tell a long story, like a fairy tale, to musical accompaniment.  The village then boards them for the night.  This way blind men didn't have to just be beggars.  They could earn for themselves a living.  It was interesting to see, though I couldn't understand the story that was being told (we were given a summary later).  Read my full essay about this blind man. 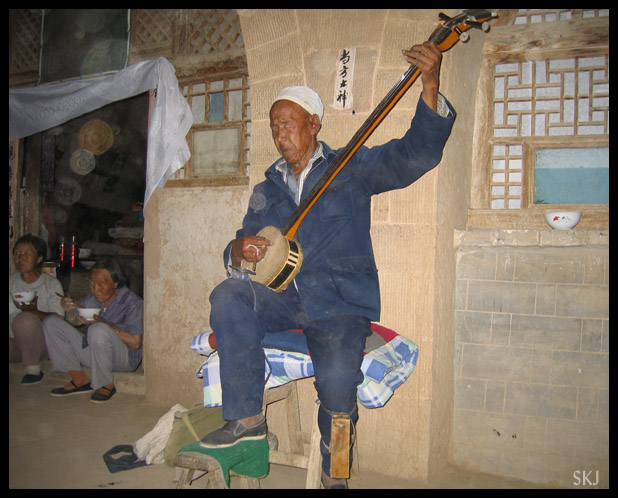 Also, because we were there to study folkloric and nonmaterial culture, the village put on for us a mock wedding celebration and invited a wedding band to come play.  Jiang played the bride and our one male volunteer played the groom.  Jiang rode a donkey in a traditional procession.  And people came from neighboring villages to take part in the pretend wedding.  Anrong's family said everyone had just as much fun as if it had been a real wedding.  Read my full essay about this wedding. 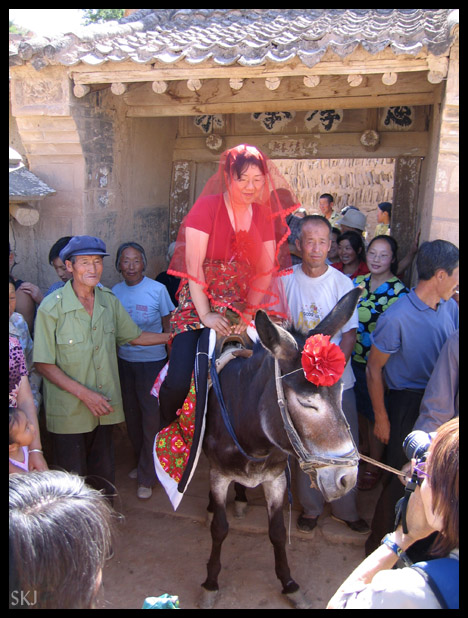