Why Did the Tunisian Cross the Road? Musings in Kairouan and an ancient colosseum

Why did the Tunisian Cross the Road?

Because it was there.  That is our new joke.  I'm not sure what men do around here for work, but they sure spend a lot of time sitting along the road and standing in the middle of it.  Seriously, gangs and gangs of them sit about along the roadsides and then decide to cross to the other side for no apparent reason, without even looking down the road to see if there is traffic approaching.  We find it humorous.

The mood when driving around is often enhanced by fun Arabic music on the radio when we can find it.  The DJs here basically talk all day and insert a song here and there.  It's extremely rare to hear two songs in a row, unless you can pick up radio from Europe – which we can sometimes. Our truck has shortwave radio band, so we've gotten some funky stations, in Chinese, for example; and our favorite to date: nondescript music playing softly while some guy says deliberately (and in English), "The fish is mute. The fish knows everything." [I actually wrote an entire essay inspired by these two sentences, which was published in Sou'Wester. I titled it "The Fish is Mute," and you can read it on my writing website, HERE.] People are quite friendly -- everyone waves when we drive by in our truck.

Leaving all the Star Wars stuff behind, we drove on to Kairouan, making a pit stop at El Djem, where the third largest Roman colosseum in the world is. The colosseum, though not as big as the one in Rome, is much better preserved. 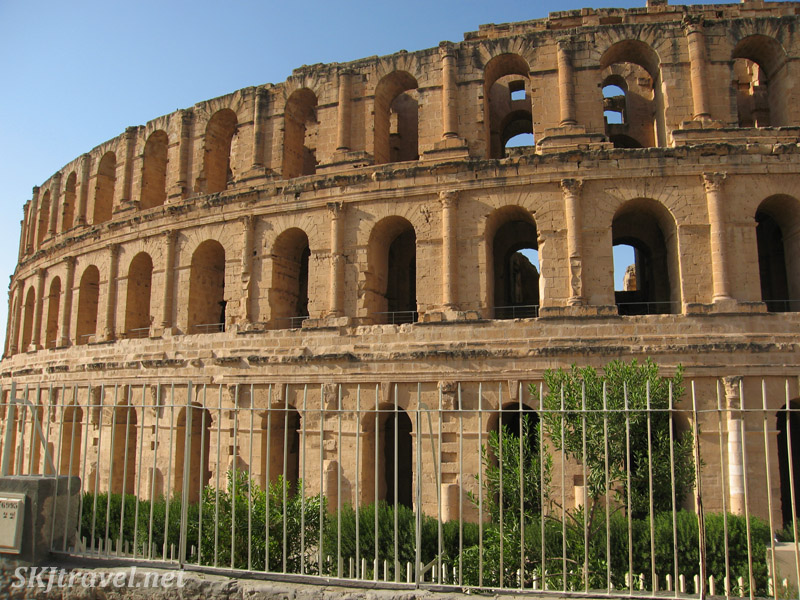 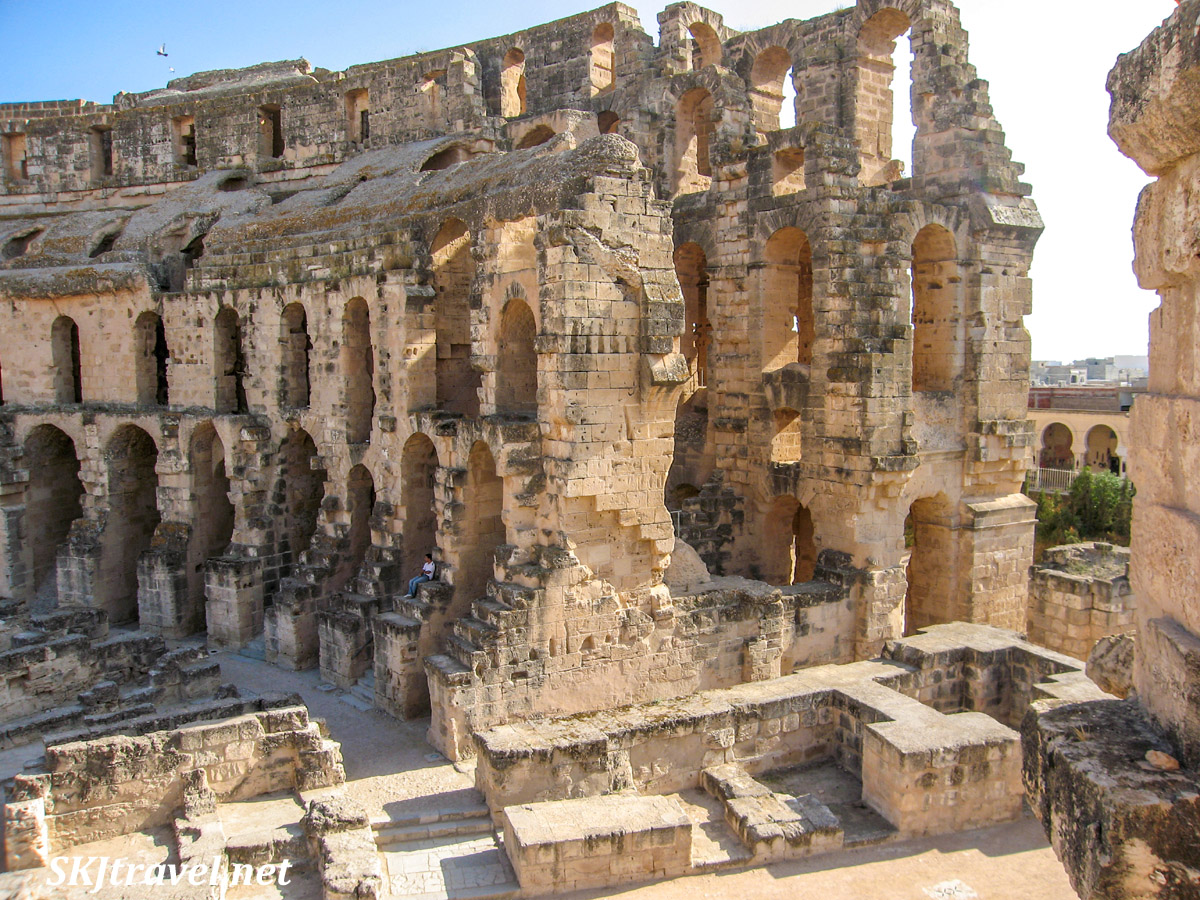 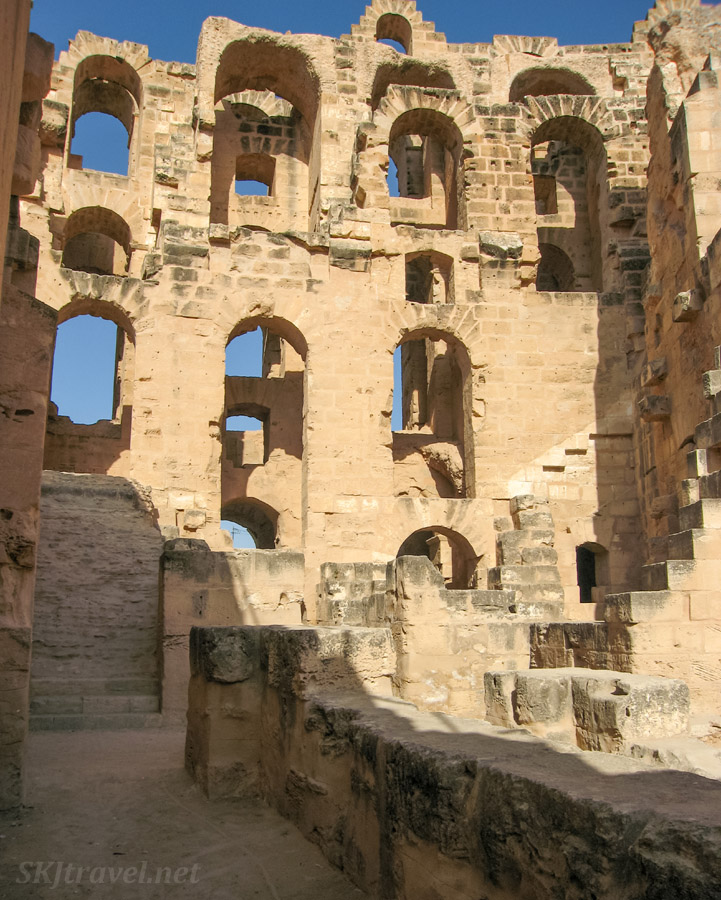 My favorite part was that you could walk beneath the arena, where the animals and prisoners and gladiators waited to come up “on stage.”  You could hang out in one of their pens and see what it must have been like in those hot, cramped, dark quarters. Then imagine being prodded out of your cell and brought down the long corridor beneath the floor and led up the steps, emerging into the arena, where death surely awaits you.  We were there at closing time, and the guard walked through the arena clapping his hands to get the attention of us stragglers to tell us to leave, and the sound of his clapping echoing through the stone bleachers was impressive. I imagined tens of thousands of clapping hands and jeering voices. It was truly terrifying. 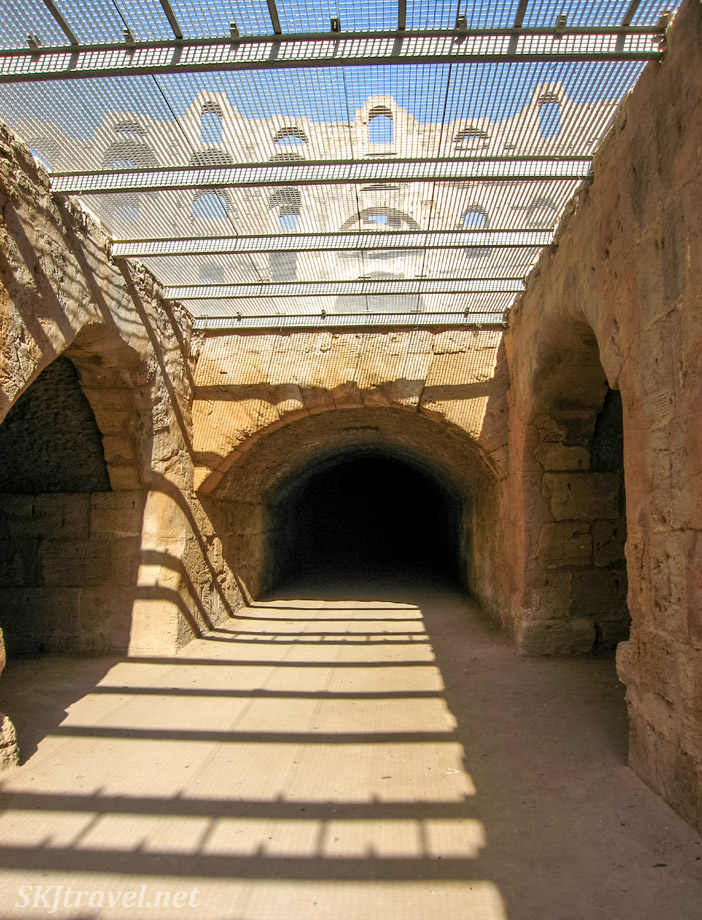 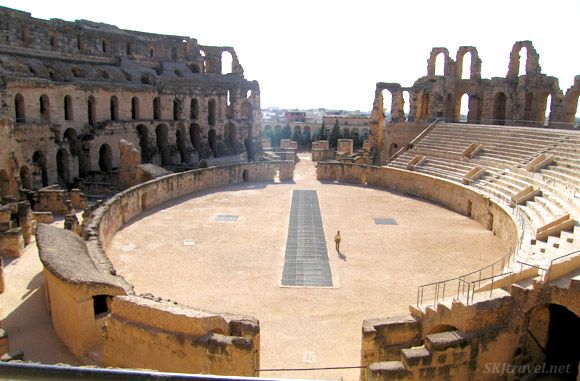 So these "publinets" (where I get internet access) are not air conditioned and my brain gets tired typing on these funky keyboards. There are more details to divulge, but perhaps after I get home to my own computer I can write more. [Here's one tale from the town at El Djem I wrote after I got home: "How to Get Free Rings"]

Today we spent the morning wandering around the medina in Kairouan. It's a beautiful medina, and Kairouan is particularly known for its Berber carpets ... carpet makers are concentrated here inside many "carpet houses." We were told we should experience this, so we did, and it's a whole ritual where you walk in and are served mint tea, survey the carpets, watch a woman working at her loom (far, far slower than the Chinese villager working at hers by the same method), then you sit down on benches in a large room and they role out carpet after carpet for you to consider. They are certainly beautiful. And it's a hard sell, but the carpeteers, if I may call them, also know that many tourists are not there to buy, so you just need to be firm. [We were firm here, but gave in to a Persian carpet in Iran.] 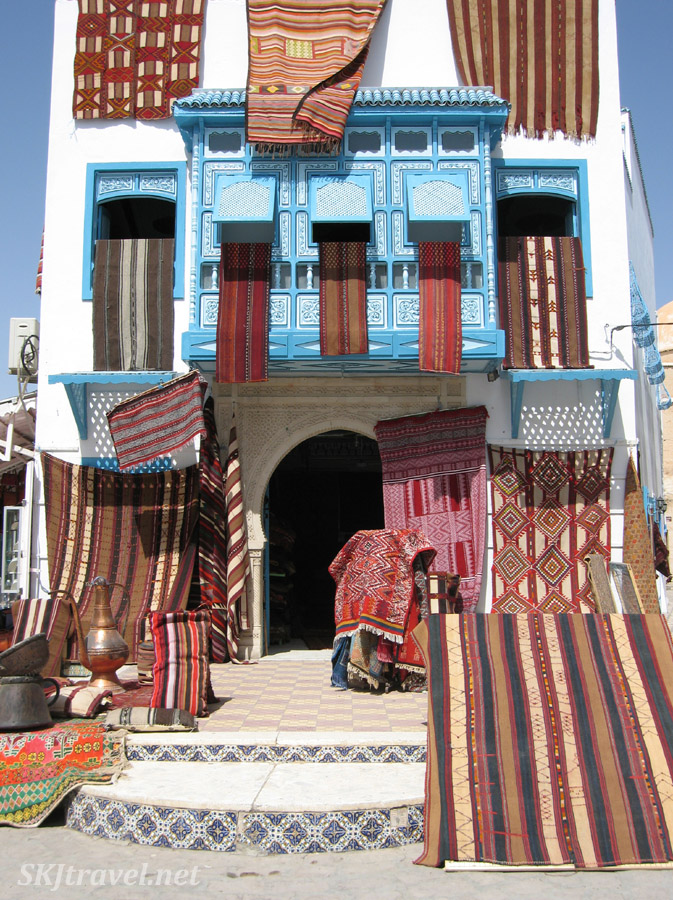 Sometimes it's worth stepping inside a carpet house just to see the "house" itself. In this case it was a former mansion. 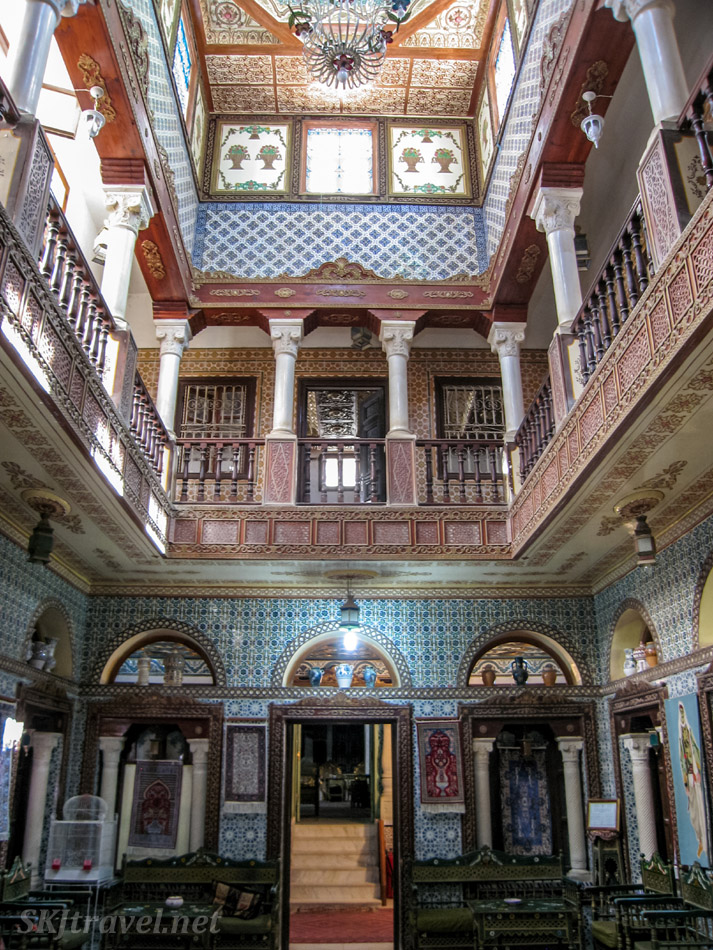 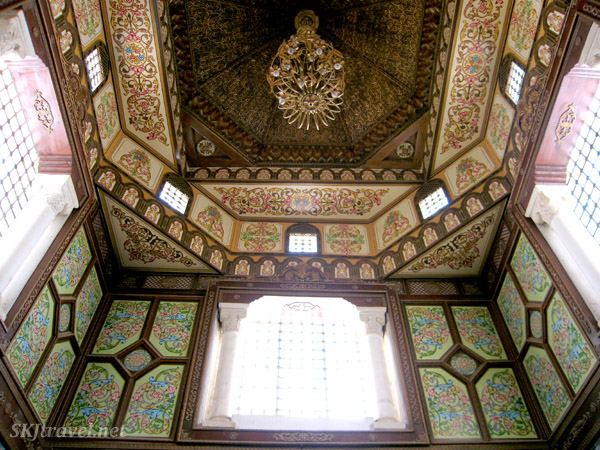 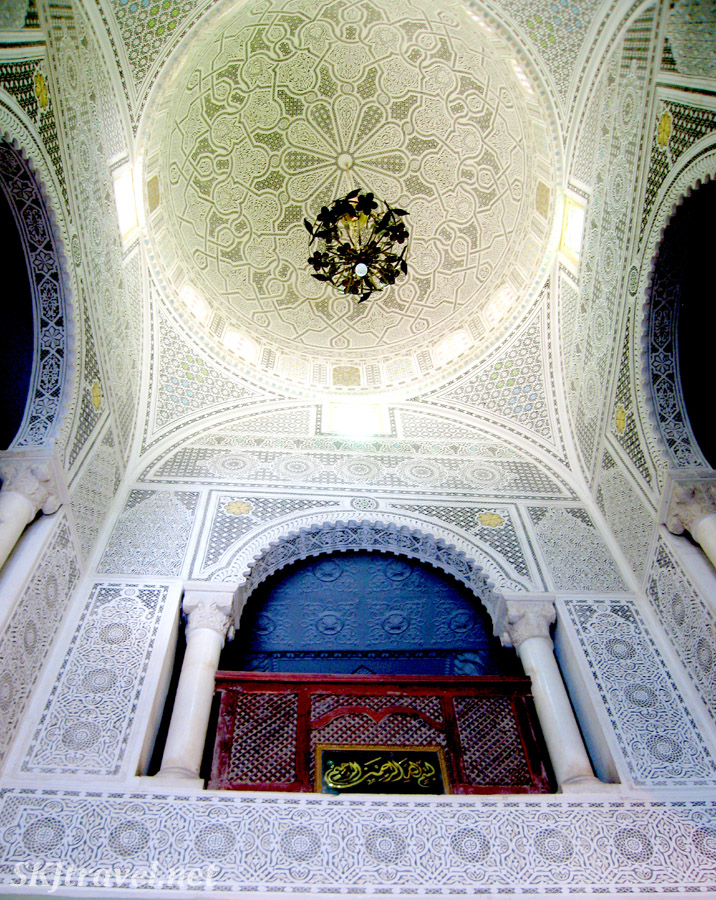 What Kairouan is most known for is its Great Mosque, the most important and oldest mosque in northern Africa. As non-Muslims, we could not enter any of the rooms, but some had the doors open so we could look inside. The architecture was very grand with large pillars and arches. 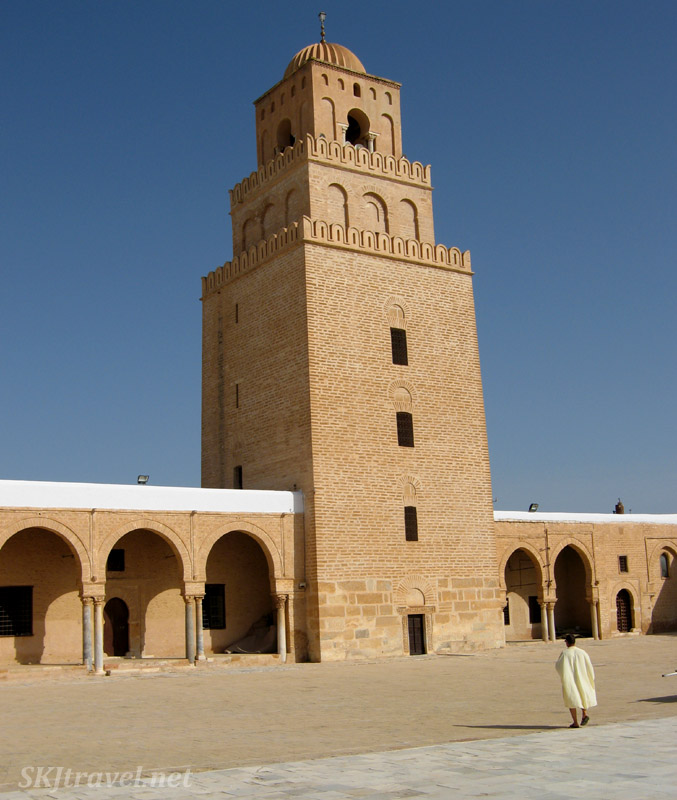 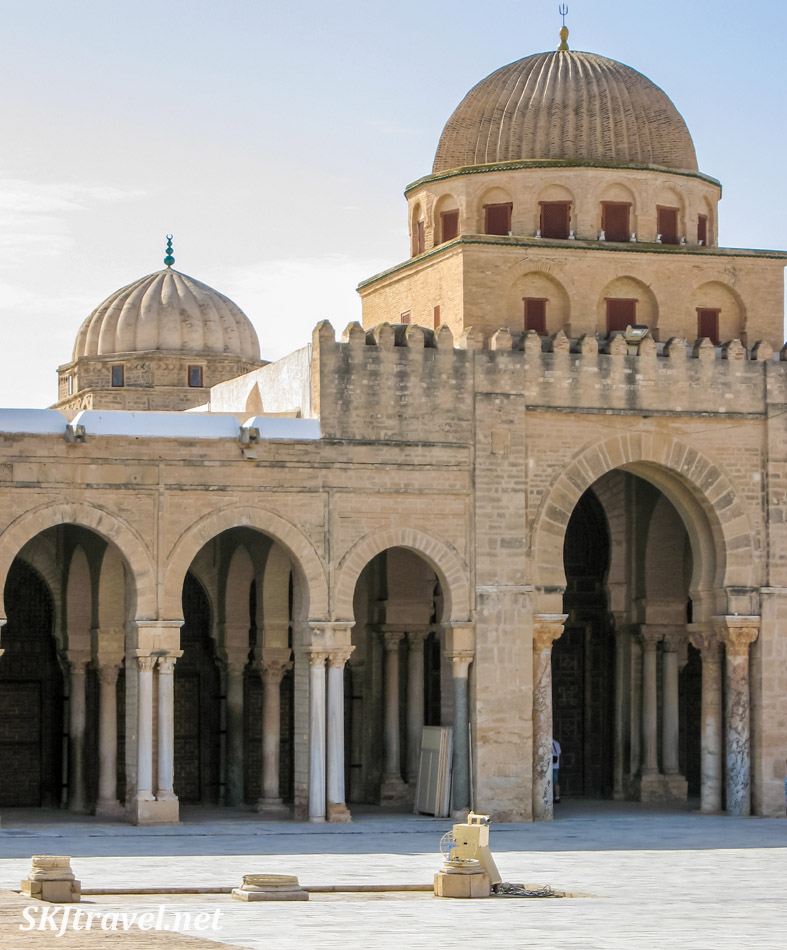 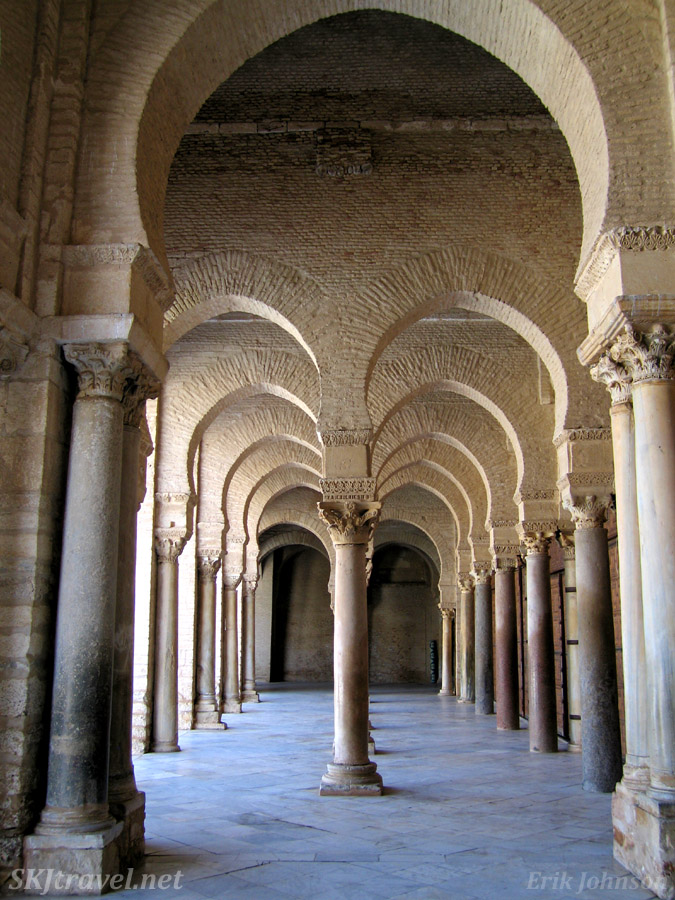 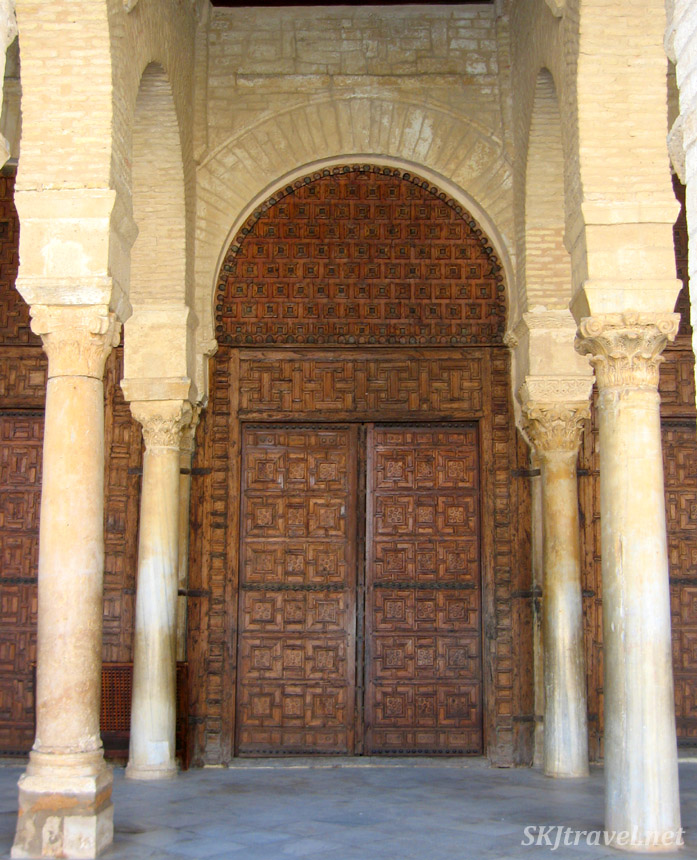 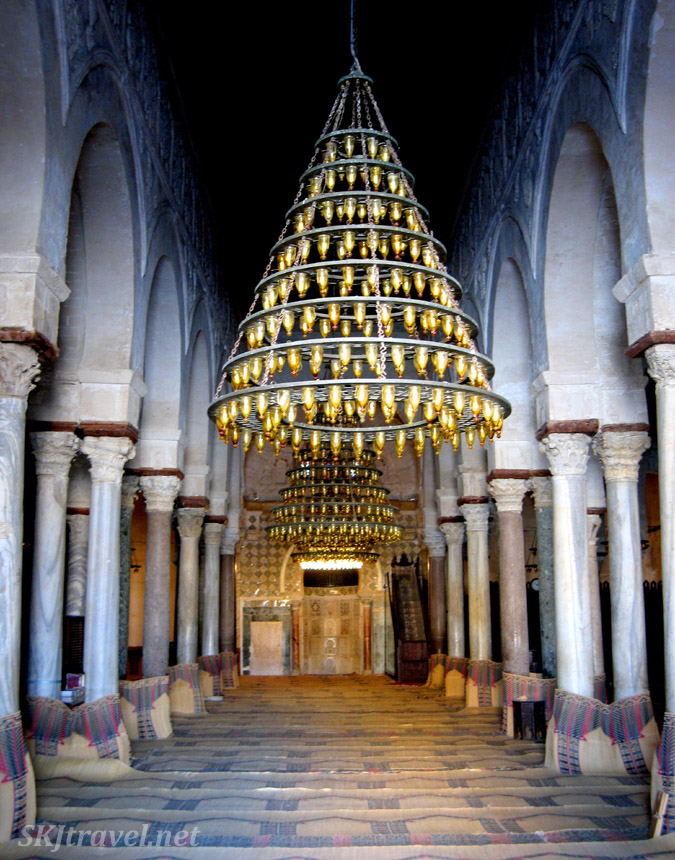 Here are a few other images from exploring the medina in Kairouan. We ran across a kitty cat shopping for a fish fez. :-) 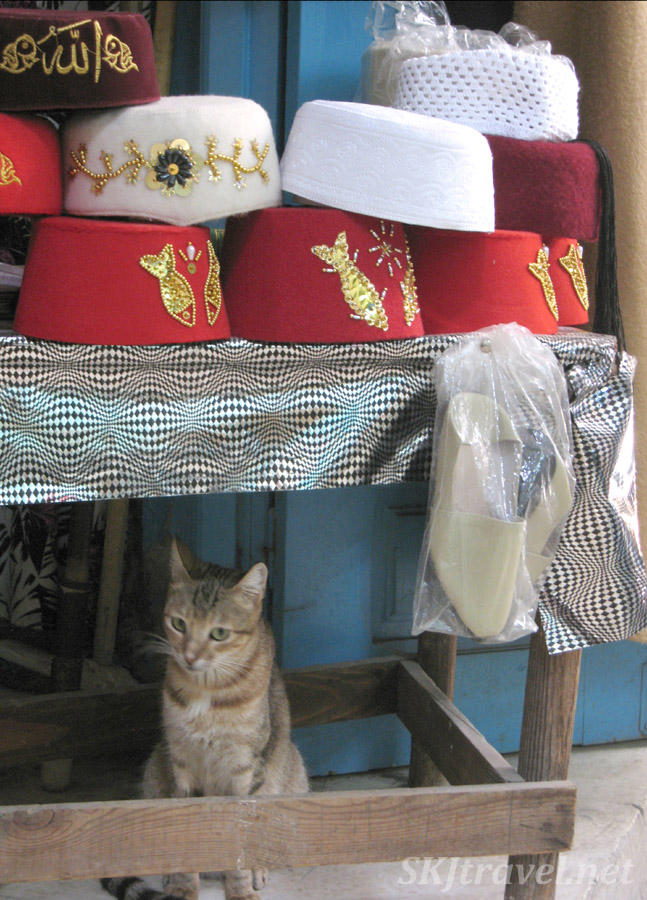 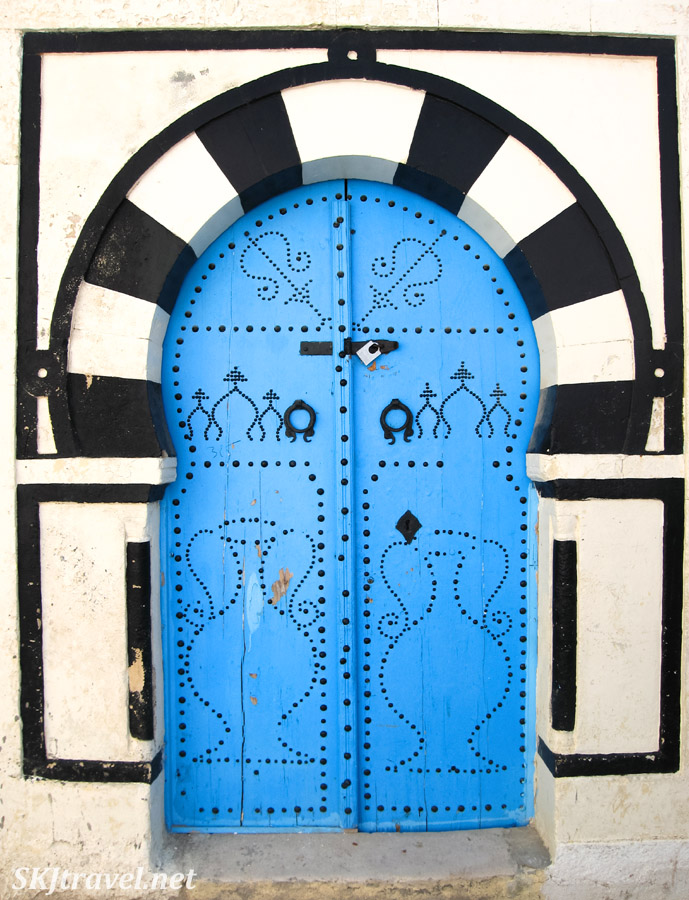 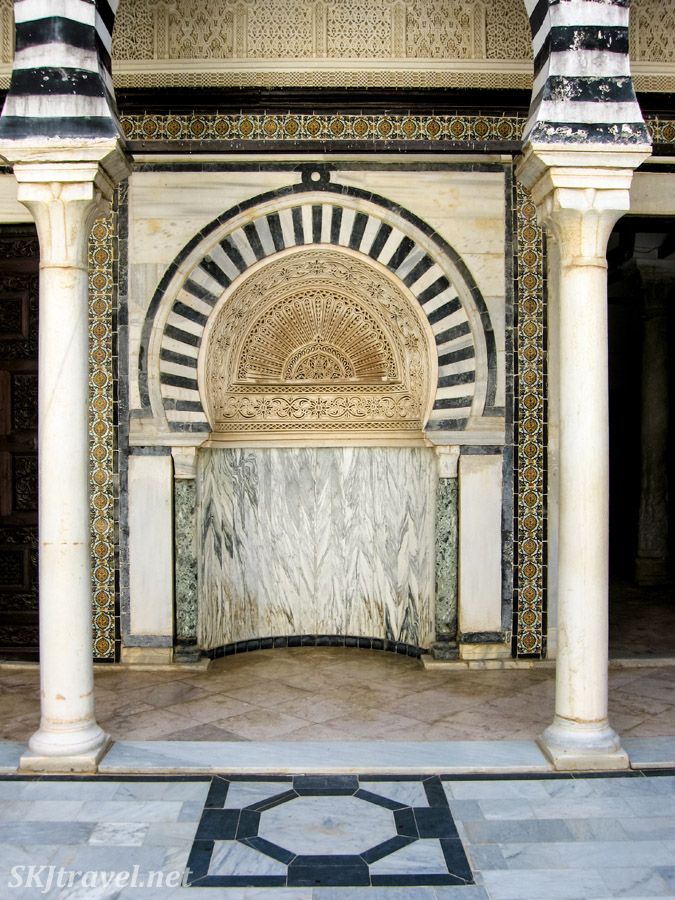 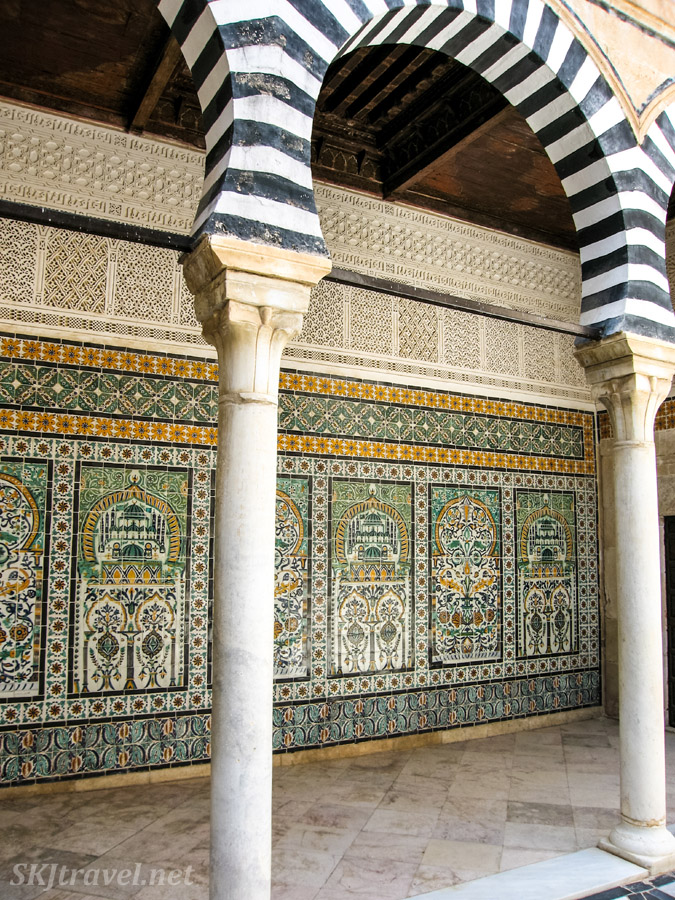 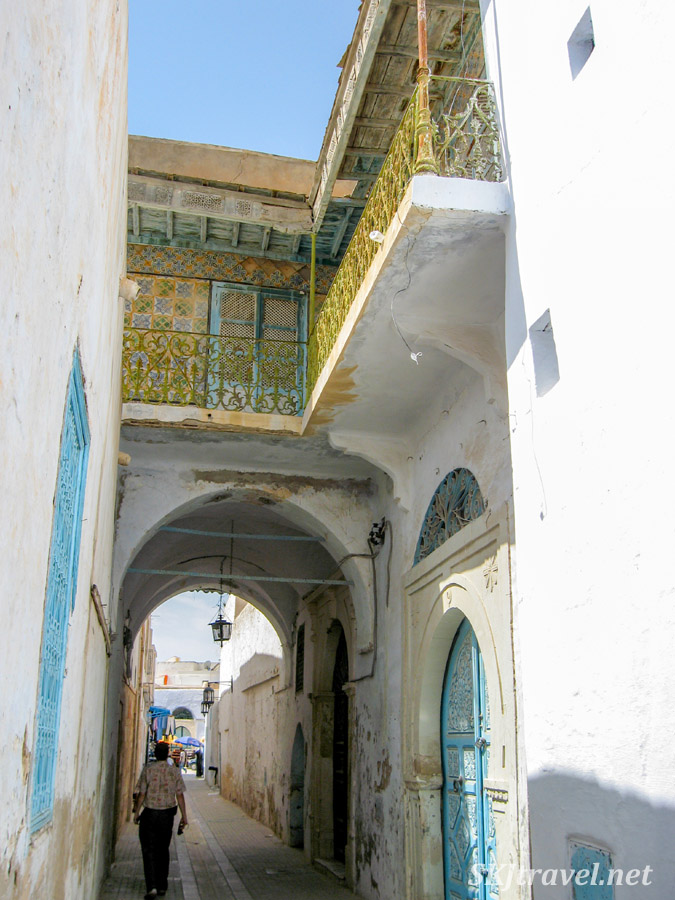 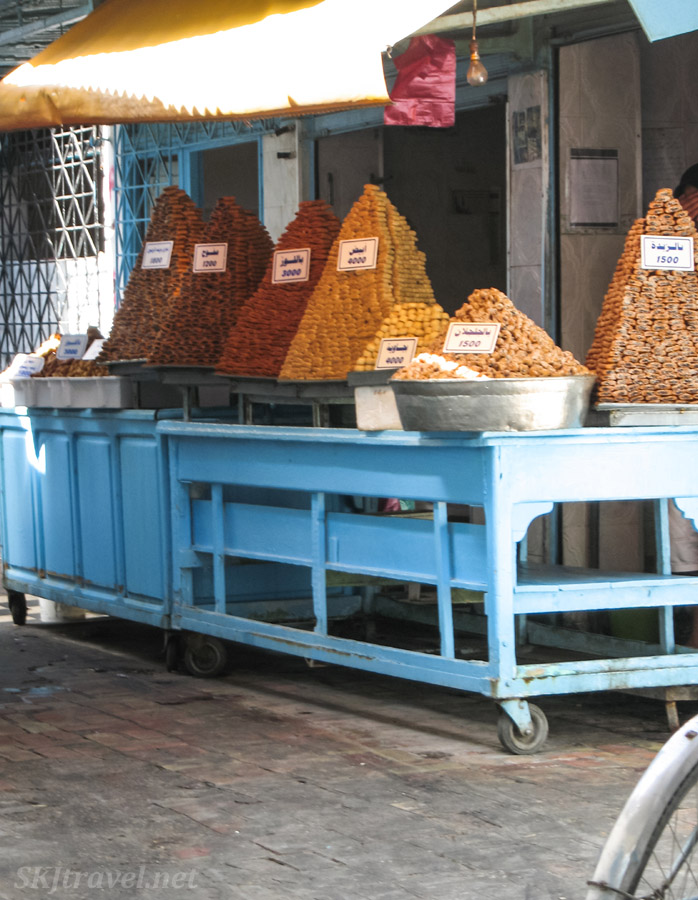 This happened to me all the time in China, but I was surprised to have this experience in Tunisia. I think there are still a lot of provincial areas where tourists (white people) do not pass. This family asked to have a photo taken with me. 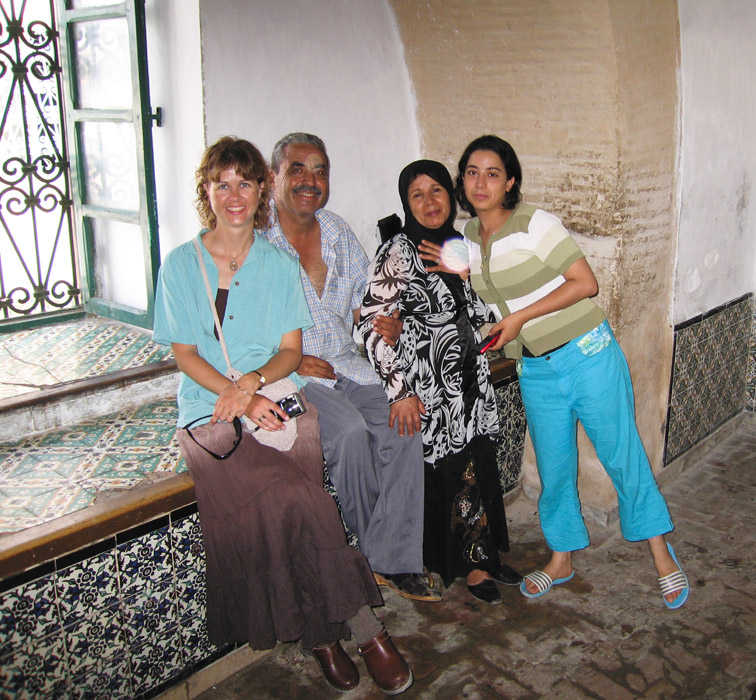 Before we left Kairouan we had drinks at the most posh hotel in all of Tunisia (5+-star), the Kasbah, (means fortified tower) outside the medina in Kairouan. And yes, we rocked it. It was birding hour while we were there, the hour or so before sunset. Thousands of birds filled the trees around the outdoor swimming pool where we sat, and they made an amazing ruckus, quite fascinating, really.  And that happened to be some sort of special day for the Ramadan, and the evening prayers blasted out of the minaret speakers for a good half an hour, until sunset at 7:30. The wailing prayers layered over the crazy chirping birds was a little surreal.  All restaurants were closed that evening, except for one the proprietor of our hotel mercifully directed us to after we wandered pitifully around in gnawing hunger.

If you're keen on eating whenever you feel like it, I must strongly disrecommend visiting a Muslim country during Ramadan. When I planned this trip, I saw that Ramadan was coinciding but I was ignorant of the consequences to us as hungry tourists!

Read more posts about Tunisia
Read a Tuesday Tale from El Djem: "How to Get Free Rings"