Baboons and Bacteria - Beasties at the UWEC

So here’s a conundrum for you:  How is it that I detest cleaning the home that I live in every day and therefore seldom do it, but I’m OK with cleaning an animal’s overnight cage, full of spoiled fruits and veg , and intestinal evacuations of all sorts, every day? Similarly, I’ve kind of lost my zest for cooking the last few years, yet am perfectly happy chopping up food and stirring porridge for the critters. Except the cassava. That stuff’s a … well, it’s a very stubborn root when it meets a knife. Tried another new fruit yesterday: pawpaw. Looks like cantaloupe but tastes heaps better.

There’s another American volunteer here doing a 4 month internship. The other day, she and I were walking past the deranged baboon’s cage and she had a broom in her hand. She thought maybe he would like to play with the broom through the caging (stick his hand out and touch it, etc.). So she held the broom up to the cage and he grabbed it all snarling and aggressive, and within a second he had snapped the wooden broom handle completely off and had the brush part left in his hand. It was so lightning quick and so brutally forceful. Just makes you realize what wicked strength those guys have. And if that guy ever escaped… I do believe he would rip your arms off! So there he is with the broom brush and we can’t get him to drop it, so just had to leave it be. Eventually he dropped it out of range of where he could reach it through the cage. So I went to pick it up. Even though I knew he couldn’t touch me, still I was only just beyond the reach, so I bent down slowly and warily, my eyes completely on him, and as I got near to the ground and it became obvious what I was going to do, he went bezerk and slammed his body full-force into the cage and shook it with his hands making an unbelievable racket and baring his full set of  wicked canine fangs and growling/barking/snarling/screaming an unholy threat of violence. I’ve never seen an animal behave so aggressively, and it really freaked me out. Reflexively I yelped and jumped back. Then he quit. As I bent forward again, he reacted the same way. Three times we went through this before I kept my nerve and actually picked up the broom the fourth try. And when I did pick it up he went through the roof, absolutely maniacal.

So every day is an adventure with that guy. Every day is a royal treat with the chimps. And I love feeding the patas monkeys, too. It was so funny the other day, we threw dried beans at the chimps on their island. Normally they pick up all their food with their hands and then sit down somewhere to eat it. But with the beans, every last one of them bent over and picked the beans up off the ground with their lips. It was hilarious watching this whole troupe bend over and mill about with their faces on the ground. 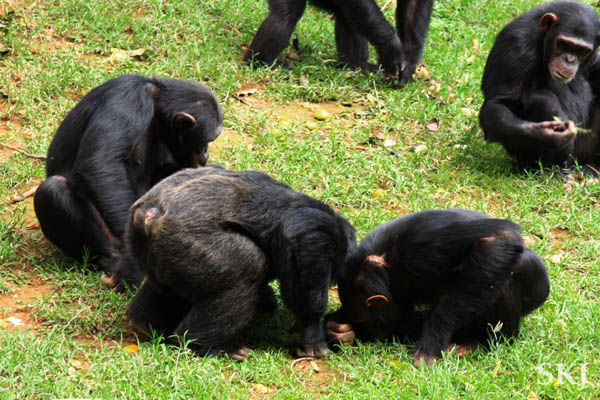 Total GQ chimp, posing for the cover of next month’s magazine issue. 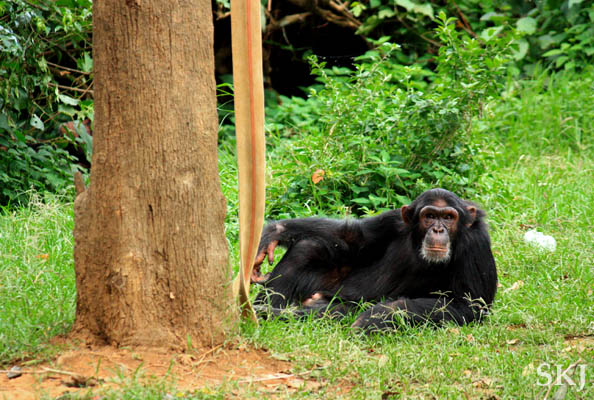 I just love the expression on this chimp’s face. 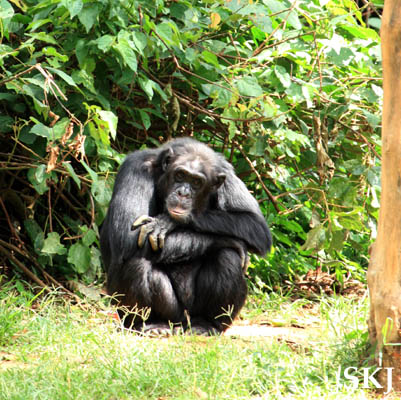 The thing I love about this photo is that the chimp has his feet clasping each other, like you would normally hold your owns hands. 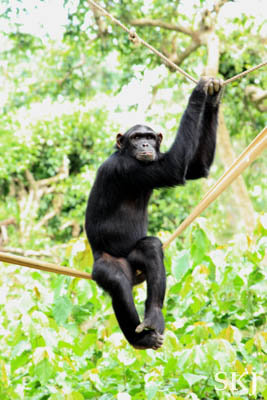 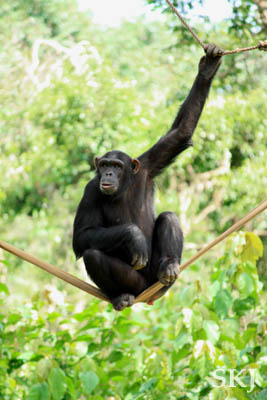 Planet of the Apes! Ready to do some business … 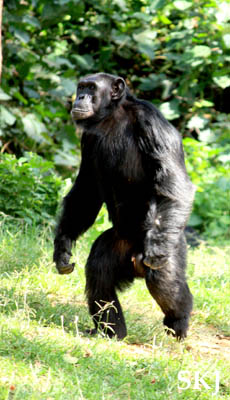 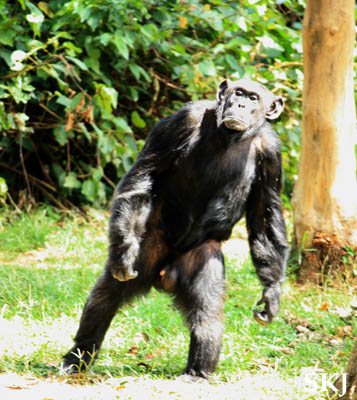 The American intern spends some of her time in the lab analyzing fecal samples from the animals looking for parasites. So the other day she showed me how to do this. First time I’ve looked into a microscope in surely over 25 years. I don’t remember being too particularly enthralled with biology in school, but she showed me a parasite and some bacteria in the sample I prepared. And it was fascinating. The little bacteria were just a riot to watch move around. I know you’re wondering how in tarnation bacteria can be so entertaining. Not really sure how to explain the amusement. But these little dudes going about their lives … swimming around aimlessly in the preparation liquid (smashed onto a slide) … some of them spinning themselves around in circles, others trucking around here to there and back again, other string-shaped fellows compressing themselves into a very short string and then elongating into a long string, like a tiny slinky being played with. It’s just like a random 3-ring circus of critters behaving like loonies … seemingly without rhyme or reason.

Huge cockroach inside my house … now I’ve discovered the enormous monitor lizard that lives in my yard. Hopefully someday I’ll have my camera on me when I run across him, though he’s quite skittish ... unlike Martha, who has become quite sullen and disobedient and does whatever the heck she wants, blatantly violating the terms of our roommate agreement. I have named the lizard Bernie. I hope he eats snakes. I’ve been informed there are five cobras living on the UWEC grounds and a few green mambas (more deadly than cobras).

I don’t know if the oribi have official names, but I’ve dubbed the little family: Serena (mom), Samantha (young girl), Scaredy (dad, who is totally scared of the food thrown into the enclosure… everyone else is unfazed if something lands at their feet, whereas he gets spooked and runs away), and Sorro (the young rambunctious male who takes on the taunting patas monkeys).

So I met my second Facebook friend last night. Actually, a busy social calendar yesterday. While I was eating breakfast, a fellow asked if he could sit with me. He was a Canadian university student taking a semester off to ride his bicycle across a good stretch of Africa. He said he was thinking of checking out the botanical gardens before heading out of town. When I said I’d been planning to see them at some point, he asked if I’d like to join him, so I did, as many activities are more pleasant with company. Definitely not all, but many. I didn’t pay the camera fee and not a soul would have known if I used it or not, but you know what an honest little lass I am. So I have no photos. But the entrance was cheap (he gave me the local’s price when I told him I was volunteering at the UWEC) and it’s a short walk up the road, so I imagine I’ll go back. Then I had an appointment to meet a couchsurfing friend in the afternoon; we just met at the UWEC. Then I met my Facebook friend at the hotel he works in after dinner for a drink and chat. All three were nice encounters, but I think the last was particularly pleasant. He was kind enough to clue me in to how much I should pay a motorcycle taxi to get from my place to his. Otherwise, I would have had no clue and surely been raked over the coals.

Time is flying by. I fear it will all be over before I know it. But I guess that’s just how life goes… over before you know it. Hopefully that last flash of light I get before checking out is a brilliant one. 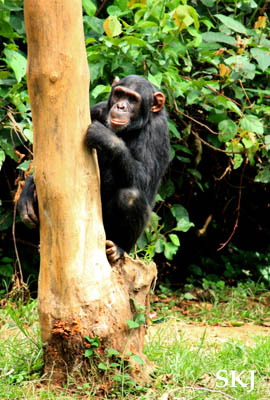