A very pleasant surprise  befell me on this year’s annual family vacation near Ixtapa, Mexico. Staying at an all-inclusive resort for a week isn’t normally my style of travel, but when the in-laws are treating, and the whole family is along, there is no better style. This year I discovered a wildlife sanctuary a mere stone’s throw down the beach from our resort. This was my third year at this resort; I can’t believe I didn’t know of it sooner.   The sanctuary is home to many crocodiles – I was told about 500, but I cannot confirm that. It’s also home to numerous bird species including the impressive spoonbill, plus many turtles, and of particular note, large numbers of iguanas. 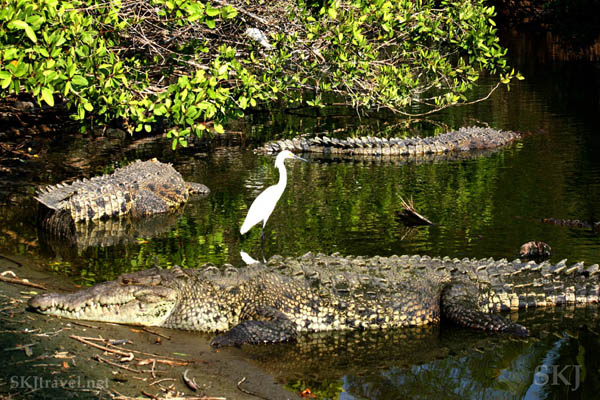 Iguanas were an epiphany to me. I’d paid only mild attention to them in photos, and I’d only seen them in real life a couple times with no particular impression made upon me. Now I want some as pets. I became utterly fascinated with them. One day I was at the sanctuary alone sitting on the ground snapping photos of the iguanas through the chainlink fence (no small feat), and a local restaurant owner came to me with a bag of cabbage. He threw it over the fence on my behalf and the iguanas swarmed in from every direction. I felt astounded at nature’s creativity. Jurassic and creepy, yet beautiful with vivid color and a texture incomparable in the animal kingdom… these reptiles completely captivated me. 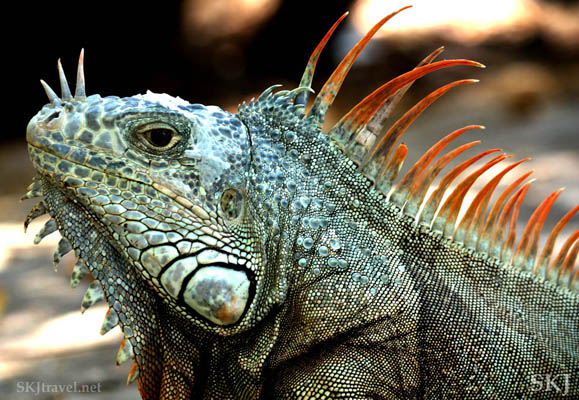 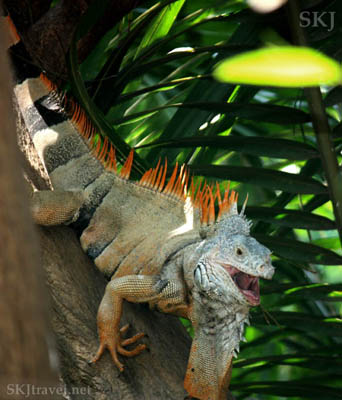 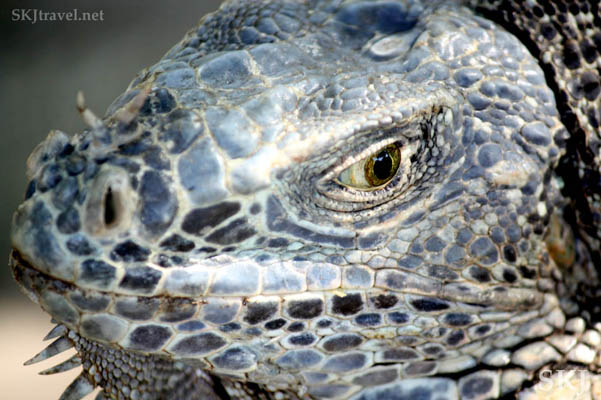 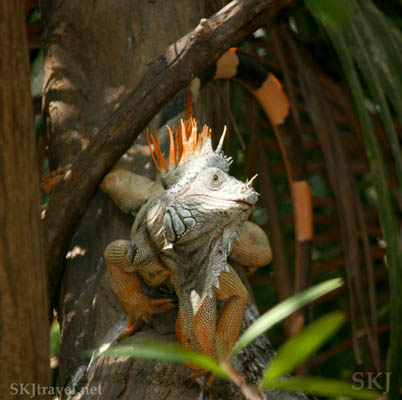 I’ve seen spoonbills in the Denver zoo and was excited to see them in their natural habitat. In the Bird World atrium at the zoo, they don’t have the opportunity to fly much distance. It was marvelous to see them spread their wings – an impressive span – and glide across the lagoon. I spent some time watching 2 of them build a nest together, squabbling over its details. I realized that when I was describing what I witnessed to others, I was referring to the bird who did most of the building as “he,” and the bird who constantly pecked at “him” nitpicking about his placement of twigs as “she.” Later, I saw their babies inching along the branches. 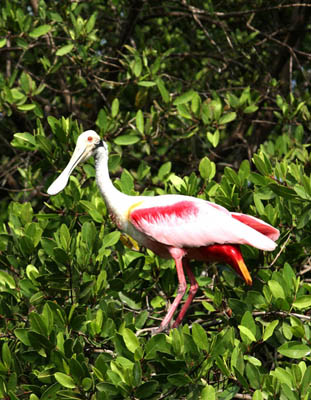 Other beautiful birds such as the green heron caught my attention as well.  One of the neatest aspects of the sanctuary was the cacophony of bird calls echoing throughout. It was always a pleasure to finally spot a bird with whom I could associate a particular call that I was hearing. But this was rare. Mostly it was a mysterious symphony of sounds seemingly performed by the air itself. 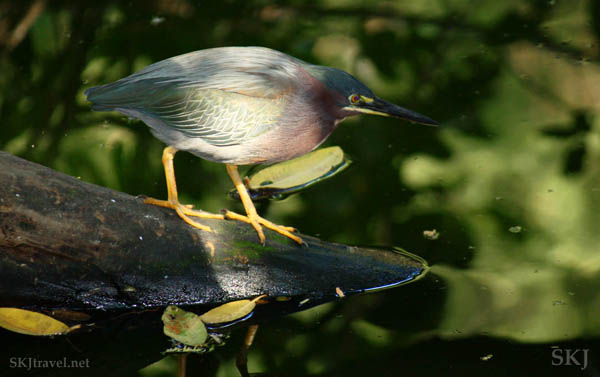 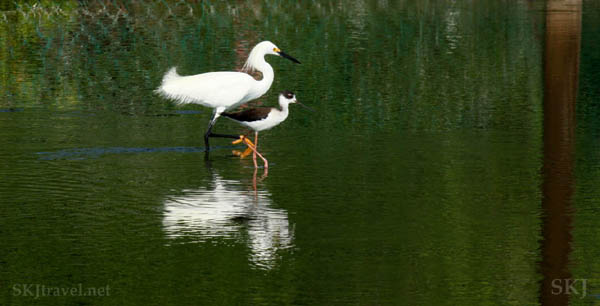 Love turtles. In the afternoons, they would line up in long rows along the banks of the lagoon. 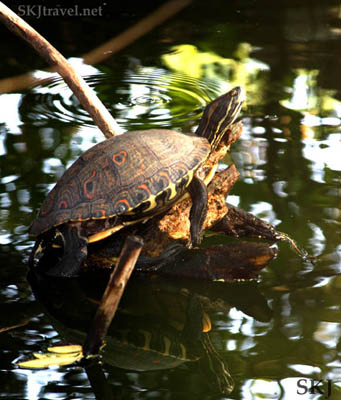 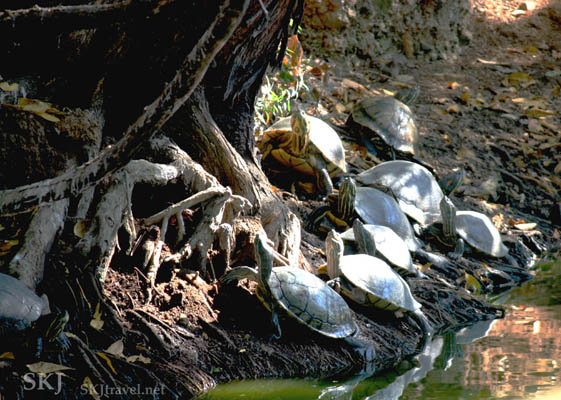 And then of course there were the crocodiles. Surprisingly large ones. Striking an uncomfortable combo of abject fear and admiration into one’s heart. You are granted extreme proximity to these creatures. I spent time scrutinizing their ancient bodies in detail. The sheer mass of the large ones was terrifying. Inspecting their webbed and clawed feet, their massive tails, their exposed teeth, their tiny eyes and the patterns and topography of their skin and scales … it’s hard not to end up with the word “exquisite” in mind. Yet I am loathe to use this word on such a violent and sinister creature. So let’s just say they are very interesting. 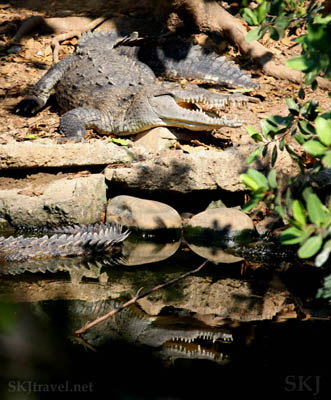 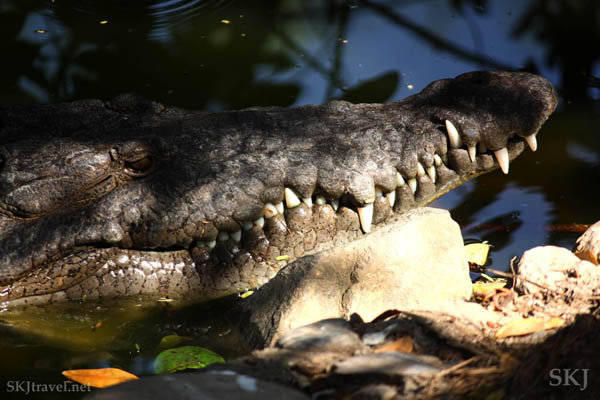 It was a step back in time, coming to this small sanctuary. No mammals were to be seen, only the reptilian and avian representatives of our planet’s deep history – crawling, swimming, gliding through a primeval lagoon. Reminding me that evolution is the most glorious upshot of the inexorable march of time, the eons fluttering behind it like ribbons in the wind, as though they were effortless. 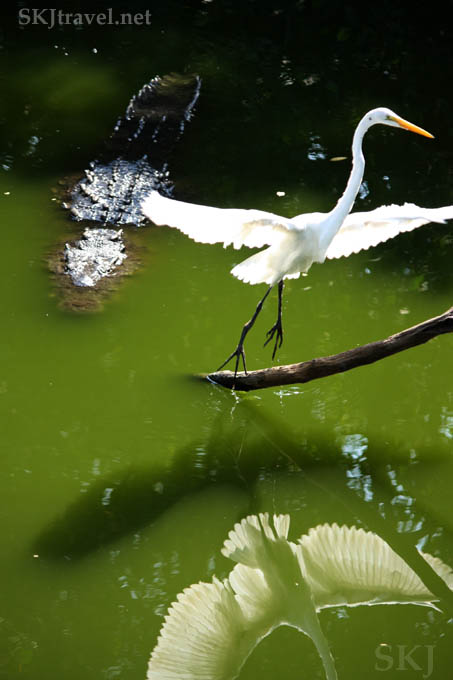 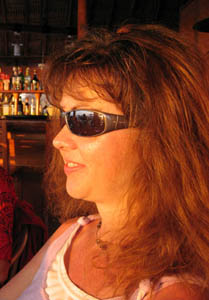