It's Come to This: Saving Just One Rhino

It's been my immense privilege and pleasure to see both white and black rhinos in the wild in Africa. They are, to me, one of the most prehistoric-looking mammals on the planet. It's hard for me to call them "attractive," but rather, "fascinating." Utterly. Amazing creatures, and amazing survivalists. 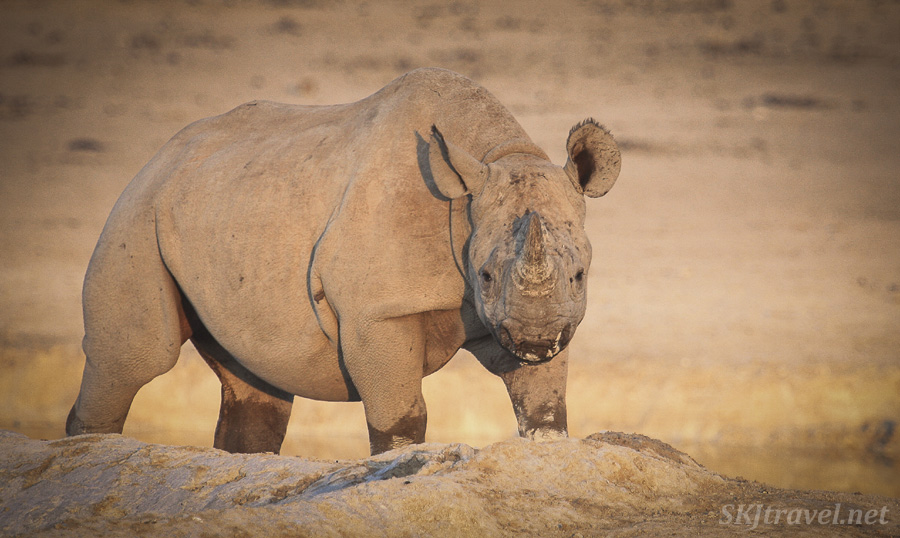 Almost every day while I was volunteering taking census data in Hluhluwe-iMfolozi National Park in South Africa in 2010, I ran into a rhino, and usually more than one. All of my most heart-pounding adventures on foot were courtesy of rhinos. I think probably my fingerprints are still embedded in the skin of the ranger's forearm from the day when a black rhino charged a small group of zebra, who scattered, and then headed for the two of us. My ranger was, in the most literal sense, gripped by fear -- not because he was afraid but because wide-eyed, terrified me was gripping him so tightly. Clearly, we survived, but not before I lost about a pound in sweat.

Black rhinos are notoriously cranky and capricious. Though they are a bit smaller than white rhinos in body size, their ill temper can project them into more intimidating creatures. The difference between white and black rhinos has nothing to do with color, but mostly with body shape and eating habits. Black rhinos, such as the fellow below (in Etosha NP, Namibia) have a smaller, rounder head and a slightly prehensile upper lip; they are browsers, meaning they eat mostly leaves from low-growing bushes and trees. Their lip can grasp the branches so they can better strip the leaves. 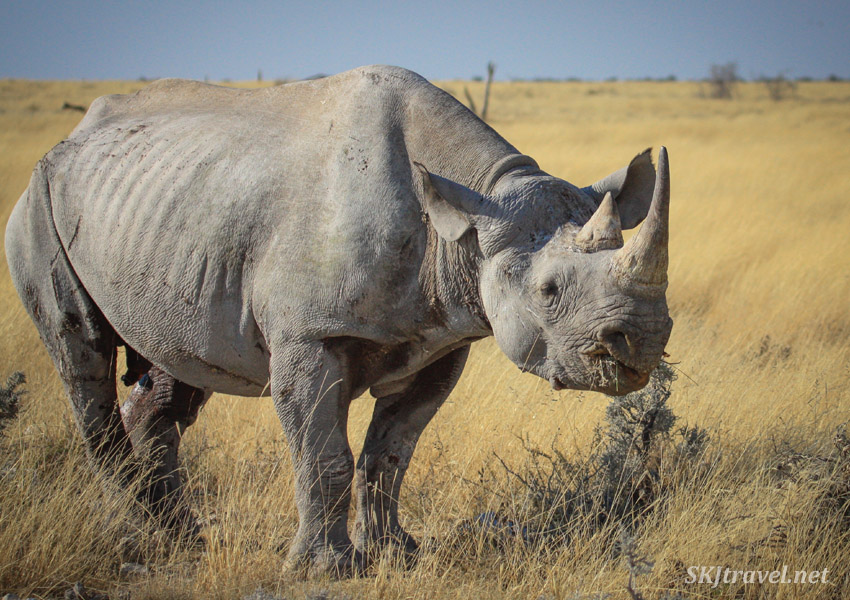 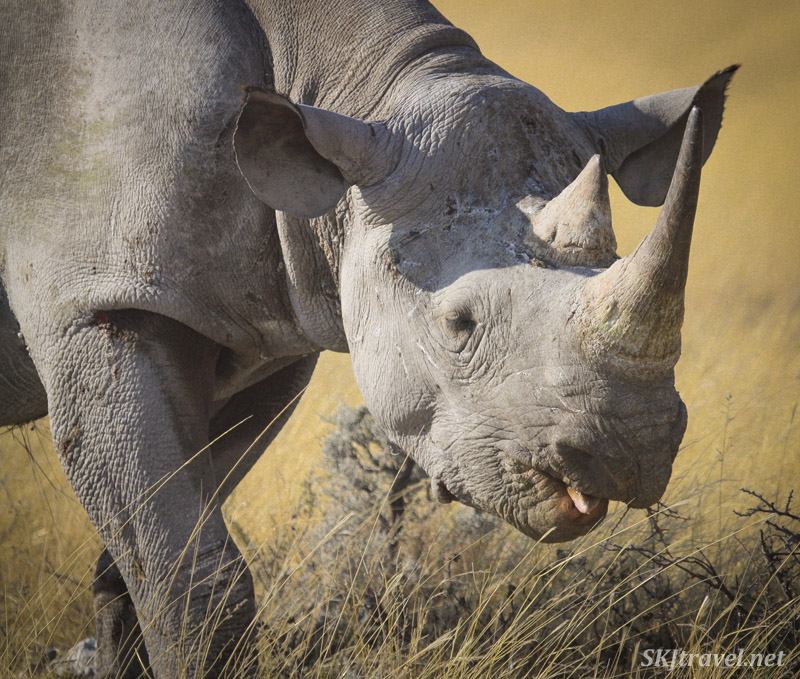 White rhinos, on the other hand, are grazers ... they eat mostly grasses and have a longer head -- positively colossal -- with a very wide square upper lip ... I think of it kind of like a front loader, helping shovel in those short grasses off the ground. 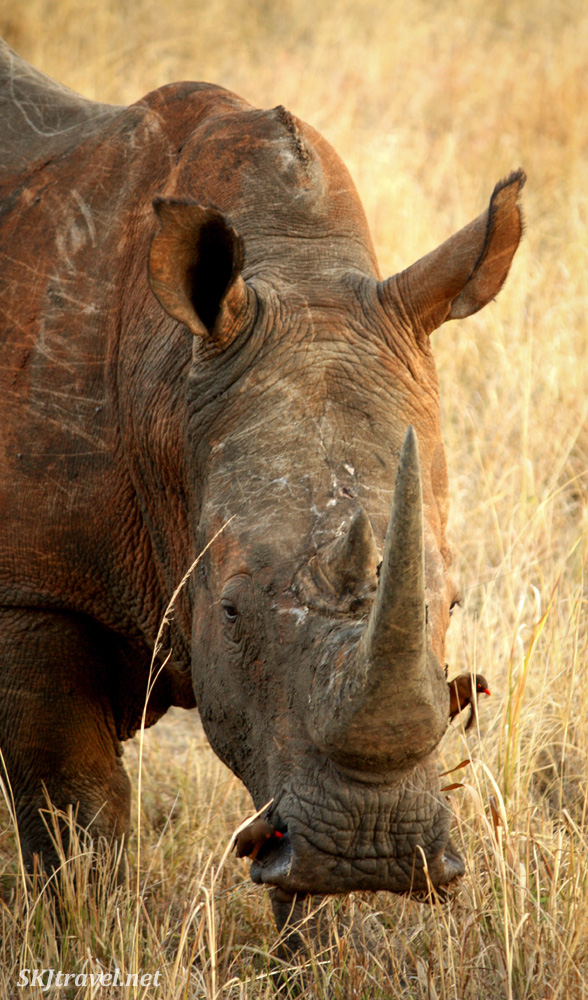 These are the guys I ran into most often while walking through Hluhluwe-iMfolozi NP (HiP) in South Africa. Rhinos taught me how difficult it can be to obey orders from a ranger who is telling you not to move when all your adrenaline-soaked body wants to do is run like hell. Because rhinos have poor eyesight, it's best to stand still and pretend to be a tree unless you can find an actual tree to climb. Let me just tell you, you really have to fight your impulses to stand there and stare down a snorting multi-ton creature with a three-foot horn pointed at you. But when you do ... oh my, what exhilaration. 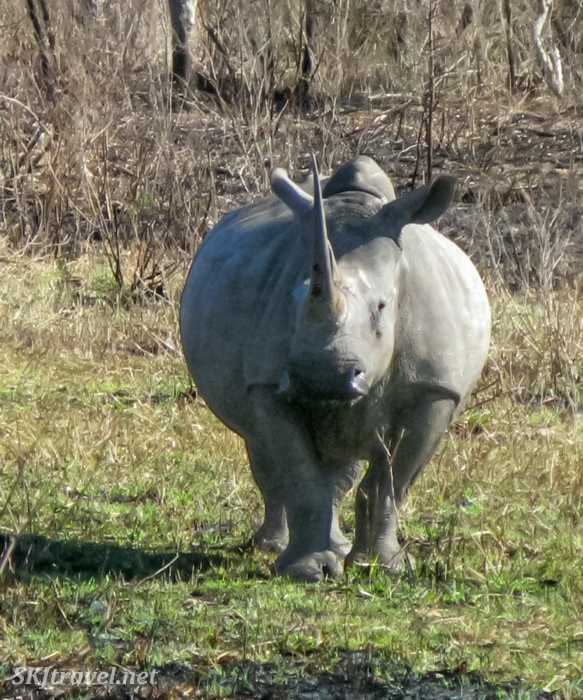 HiP is responsible for bringing back the white rhino population from nearly beyond the "brink" of extinction -- like, the rhinos were circling the drain with one foot already in it. It was an astounding accomplishment and wrote such an optimistic chapter in the annals of wildlife conservation. But the face of conservation had to change ... Africa's national parks became battle grounds. I remember reading, when I was a teenager in the 1980s, about Richard Leaky taking what then seemed a bold and drastic stand: forming paramilitary troops within national parks in Kenya who could execute poachers on sight. Now this military approach is a mandate if we are to offer meaningful protection for Africa's wildlife, and especially for the rhino species.

Right around 2010, rhino poaching in South Africa began to increase exponentially. When Erik and I were in Kruger, we saw truckloads of armed men driving down the roads. Usually if you see armed men roaming around, they are armed to protect, defend or assault humans for the sake of humans, but here we realized it was to protect animals. When I was volunteering in HiP, at first I thought our rangers had rifles to protect them and us from dangerous wildlife, but no, in fact the primary purpose of their weapons is to engage poachers and "eliminate" them when they are directly threatening wildlife. Think these militaristic measures are excessive? Poachers are paid to kill humans who stand in their way -- it's kill or be killed. A friend of mine interviewed a ranger in Zimbabwe who recounts a harrowing day under gunfire while on the job. Watch the interview HERE.

This little fella below, whom I watched drink and splash in this water hole at sunset in Etosha National Park, Namibia ... yes, he, my friends, given the liberty to do so will grow into a magnificent beast. There aren't many instances in which I feel the word "beast" is the most appropriate description of an animal. But in the best possible way, I think it's awesome for a rhino. When you see a full-grown one trotting toward you, "beast" comes to mind with all the terror, awe and respect befitting such a title. But look at this little guy here ... still just a little lump of potential -- so precious, splish-splashing in the water, so sacred to nature and to evolution. 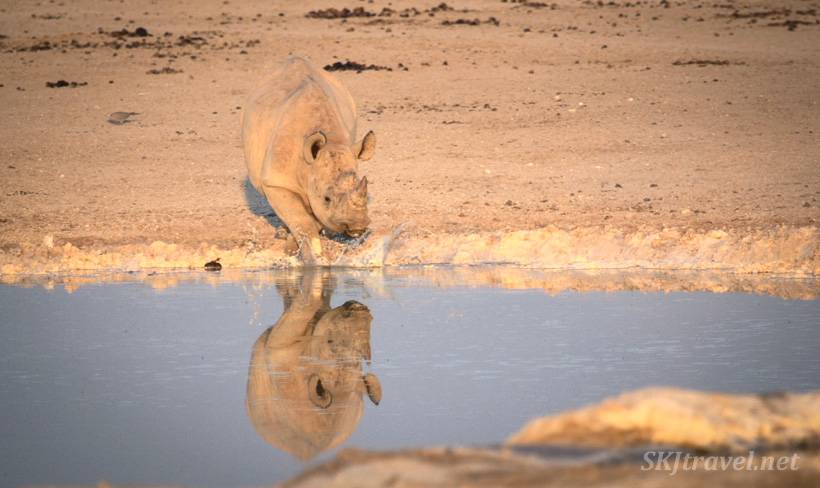 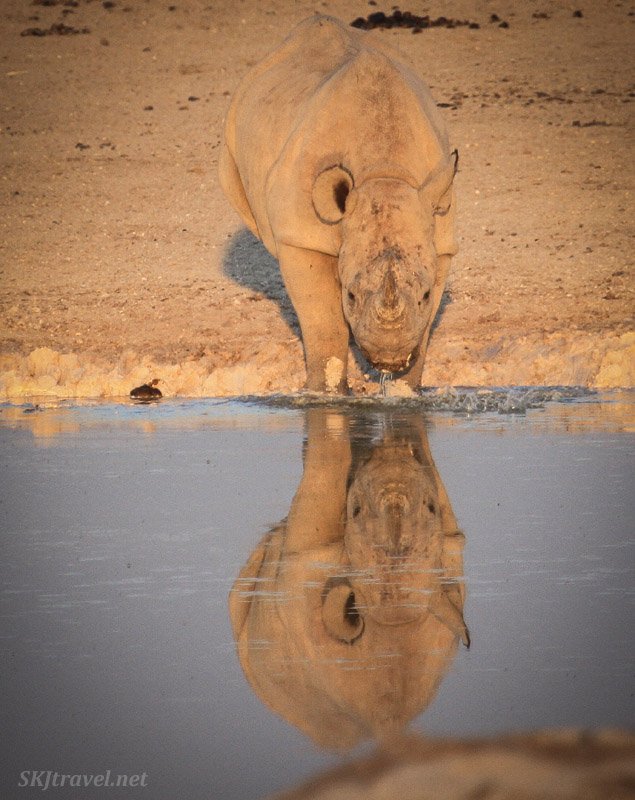 Do you know what their horns are made of? Keratin ... the same substance as fingernails. When rhinos are born, there's just a little patch of keratin from which a horn eventually sprouts and grows, and becomes lusted after by a voracious and ignorant market primarily in Asia ... it does not have medicinal or aphrodisiac powers, it's merely a wicked-giant fingernail. The only regrettable power the rhino horn has is to lay bare the worst in humanity, to flay us open and expose our mind-erasing, morality-erasing susceptibility to greed -- the greed of kingpins who hire the local poachers and sell the product -- and our failure to properly address the issues that nourish poverty, so that men are motivated to do anything to feed their family, putting their own lives at risk and decimating their own natural heritage. 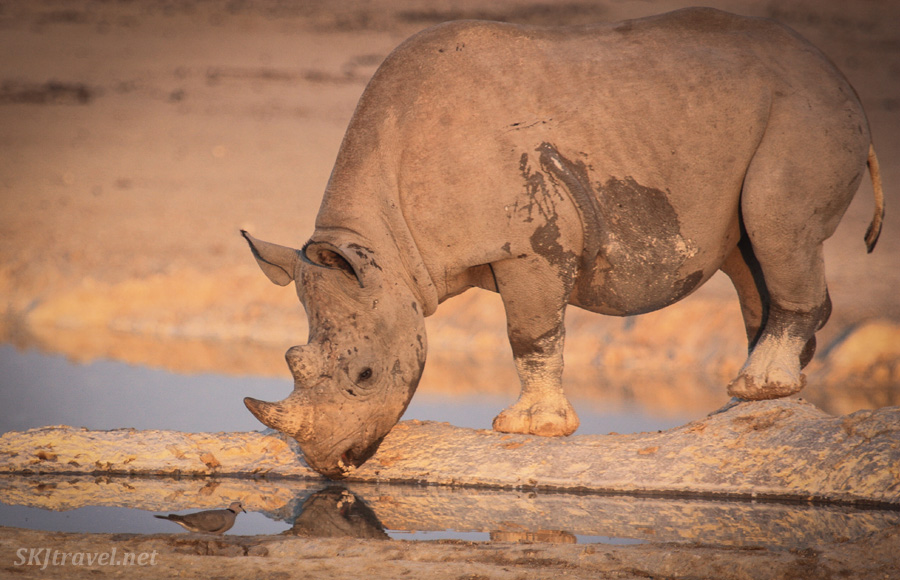 I remember Erik and I driving around Kruger NP talking for hours brainstorming ideas on how to protect the rhinos, simply out of emotion for these creatures. The poaching situation is more complicated than it might seem. There is the demand, the supply, the bosses, the poverty-stricken locals, the high-tech poaching rings versus cash-strapped national parks, corruption. And then ... reading The Last Rhinos by Lawrence Anthony illustrates another dimension: the bureaucracy, which would be laughable if it wasn't so tragic. And so now we are faced with only options of extreme measures to protect these creatures.

This is where the #JustOneRhino campaign comes in, which I'm pleased to support -- an initiative within the travel blogging community to help raise money to relocate rhinos from South Africa, the epicenter of the rhino poaching epidemic, to a secret location in Botswana, currently a low-poaching zone. The Rhinos Without Borders project seeks ultimately to relocate 100 rhinos, in order to provide them safety and boost the rhino population in Botswana, but the cost for each relocation is about $45,000 ... a daunting financial challenge. So the travel blogging community has banded together under the banner of Travelers Building Change to promote the Rhinos Without Borders initiative -- for several months, a different travel blogger each day is writing a post on their website about rhinos and this project. Read an interview with the project founders, Dereck and Beverly Joubert, at Green Global Travel.

If you have enjoyed seeing my pictures of rhinos from my travels, I respectfully suggest making a donation. Honestly -- this isn't an overstated doomsday sentence -- the opportunity to share such photos with you in the future is genuinely endangered and may not exist anymore before I retire from traveling. Rhinos aren't the only endangered species in Africa (and Africa is not the only continent with endangered species), and we can't all donate to every worthy conservation cause. I wish I could, but I don't have the resources and I'm sure you don't either. So we pick and choose and hope that the combined efforts of caring global citizens will ultimately help all of these worthy organizations and initiatives. This happens to be one I'm supporting and one I committed to sharing with others in partnership with Travelers Building Change. Now that the TBC campaign has ended, you can still support Rhinos Without Borders directly. 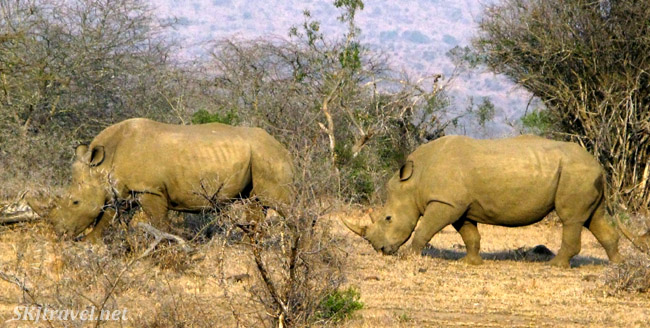 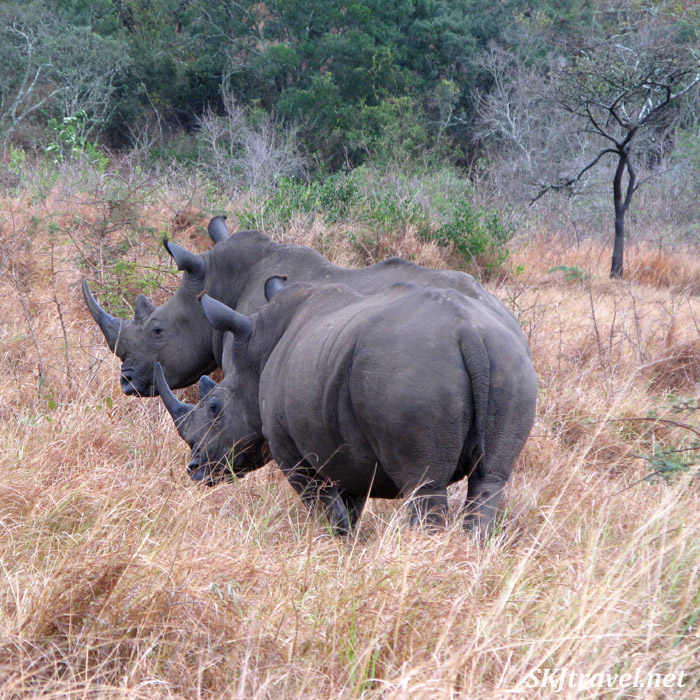 This rhino's got her eye on YOU! :) She was one of the rescued animals who made the UWEC (Uganda Wildlife Education Center) her home while I volunteered there. A magnificent white rhino. The last census report I heard on the northern white rhino, a subspecies native to Uganda and DRC, put the population at five -- the number of fingers you have on one hand. That's it. We failed to protect them. Hopefully we can redeem ourselves in southern Africa. 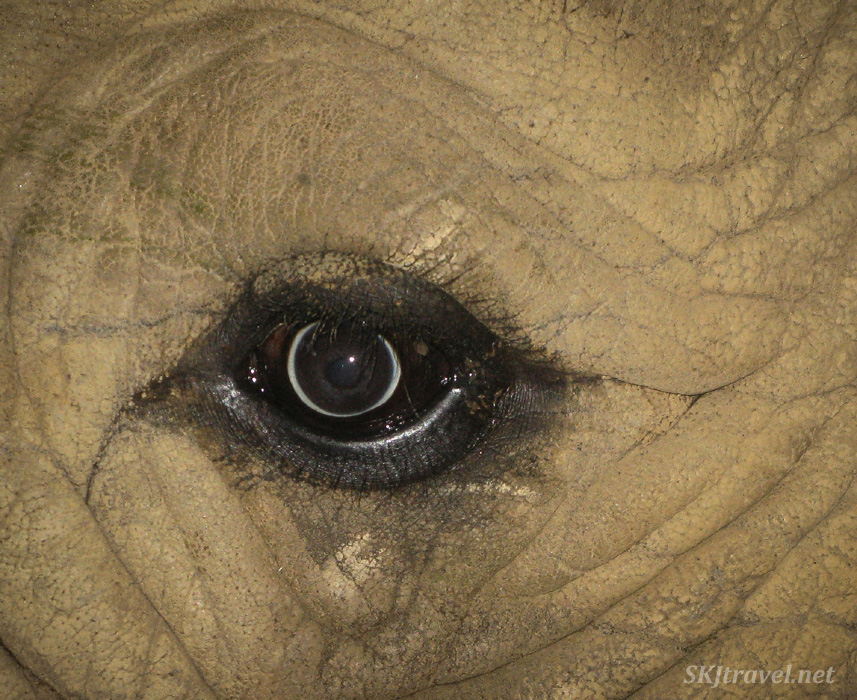 Learn More About and Support Rhinos Without Borders

The donors to the Travelers Building Change travel prize giveaway were those generous companies listed below. 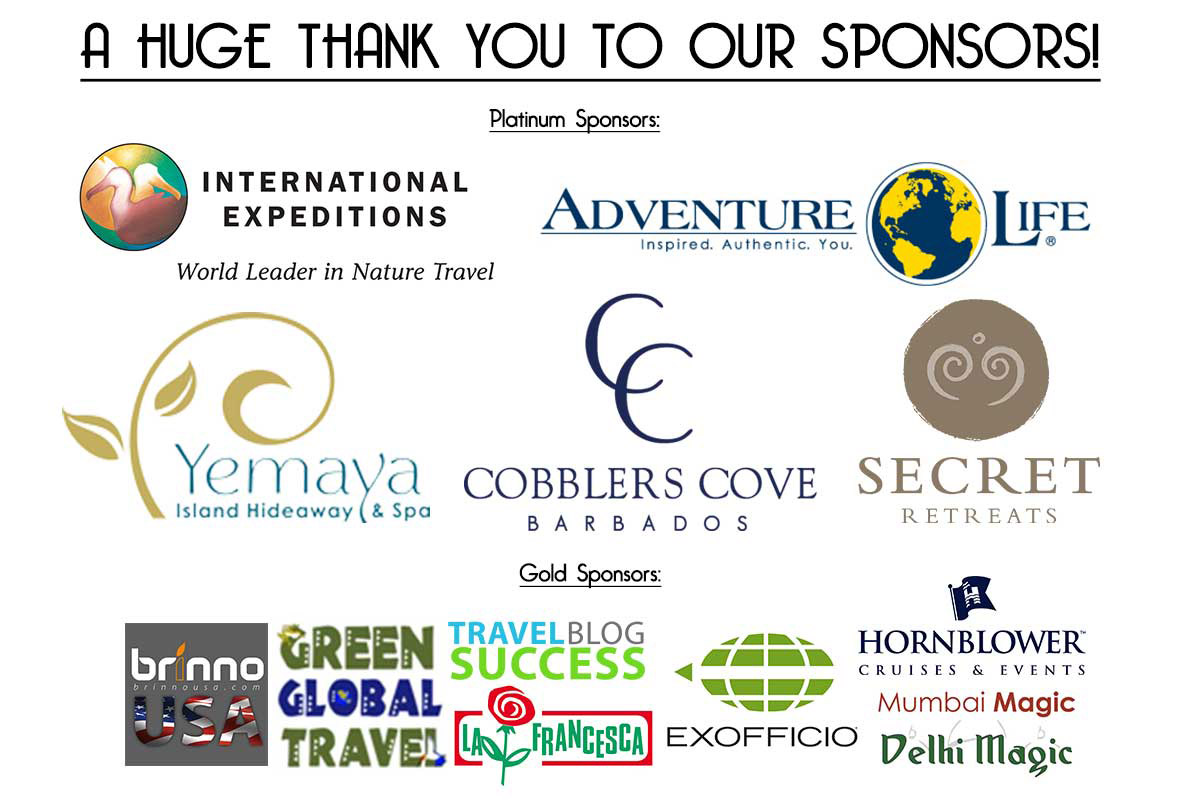