Kerman 2: The Kaluts, Plus We Go VIP and Shoot Lasers

In the middle of a desert-like landscape outside Kerman, the Shahzadeh Garden sits like a little jewel – a jewel not so much for the flowers and trees as for the copious running water … a form of opulence in this dry environment. Not just an ornamental trickle of water, but a long stretch of pools and cascades and deep channels of it rushing along the sides. Standing there in the heat with my head encased in a scarf and my arms stuffed up inside long sleeves, I have never wanted more to throw propriety to the wind and dive into those clear pools of delicious, cool water. Somehow I managed the restraint. 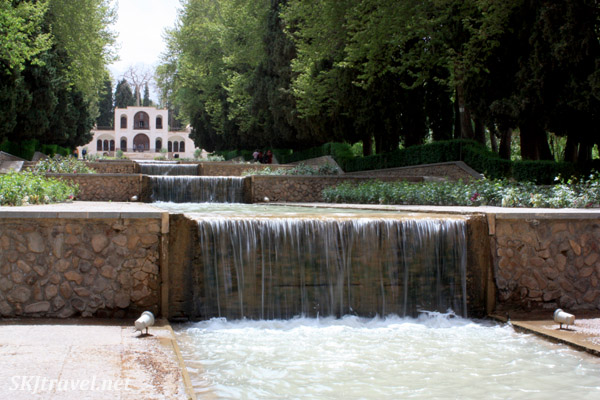 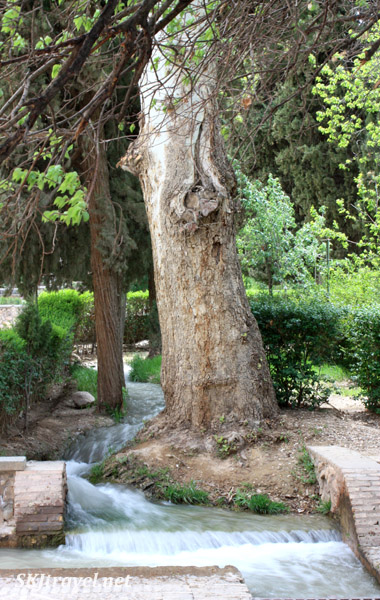 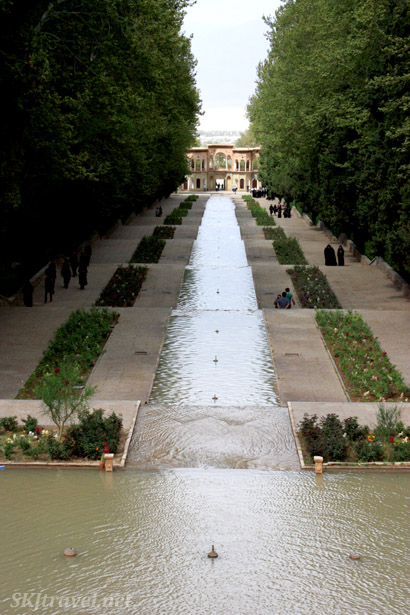 Our visit to this lovely garden had a few lessons to it. First, about its designer: the prince who built the garden was a real jerk, and he forced his subjects to labor excessively hard to build the gardens. But eventually the political landscape changed and he fled his garden sanctuary quite suddenly to Tehran. The moment he left, everyone working on the gardens dropped their tools and walked away. Parts of the buildings were never finished. Even when just 5 pieces of tile were all that were needed to finished one of the walls, the workers didn’t even bother -- they had no personal investment in their work for the cruel governor, no pride in their craftsmanship forfeited so involuntarily. So lesson 1: being a jerk will never bring you loyalty.

Reza told us that it was too bad we couldn’t go into the prince’s private quarters because it’s so beautiful inside. But only VIP people are allowed. Reza has guided several VIP people including various ambassadors to other countries, so he’s familiar with it. We expressed our disappointment that we were not VIP enough. Made some jokes about wondering how big a wad of cash was needed to elevate us to VIP status. Low and behold, after we had eaten lunch, Reza told us he had just spotted the guy who he knows has the keys to the quarters and said maybe he could talk to him. He returned a few moments later with the man and the keys. He said a little cash in the man’s palm would be appropriate to show our appreciation. So lesson 2: being friends with everyone in the country, as Reza is, will open many doors, so it pays to be friendly.

And lesson 3: The world over, VIP status can nearly always be obtained with the right amount of cash in the right hand. The first two lessons carry clear moral standards about what it right. The third … a little more ambiguous. In this case, our admission price was pretty harmless, just getting to see a nice room typically worthy only of people above our status.  And indeed, a delightful little room it was, on the second story overlooking the gardens. The man with the keys even went so far as to offer some us treats while we were looking around. 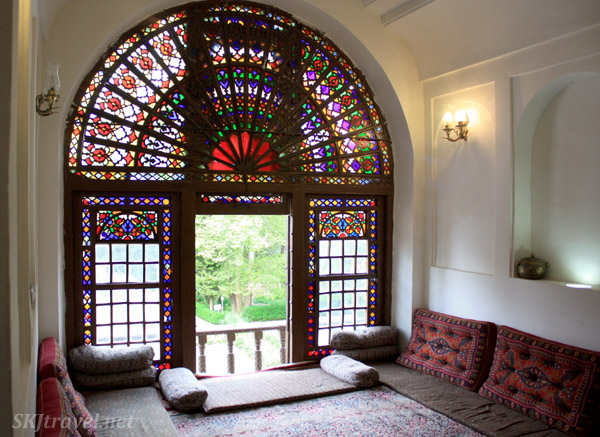 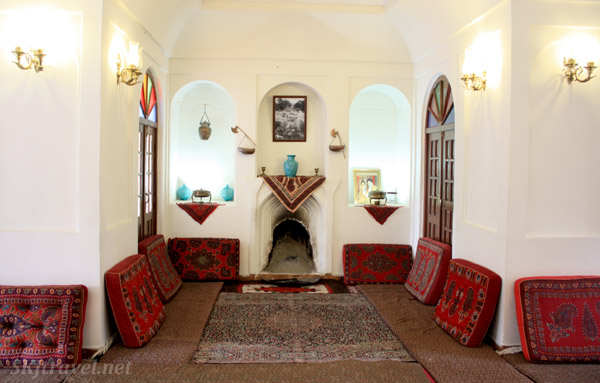 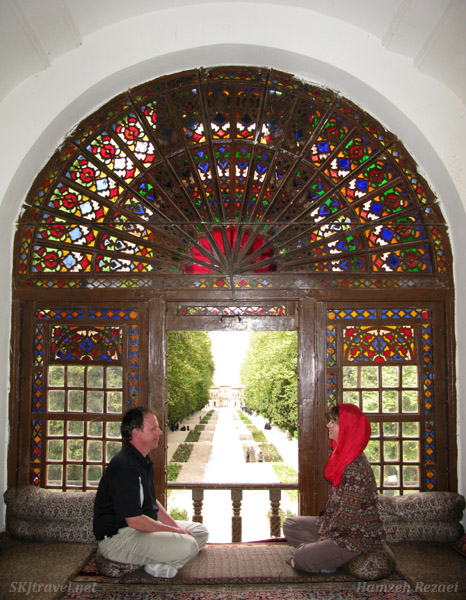 We had our lunch on the garden grounds in a cute restaurant with traditional floor seating and a canvas roof. 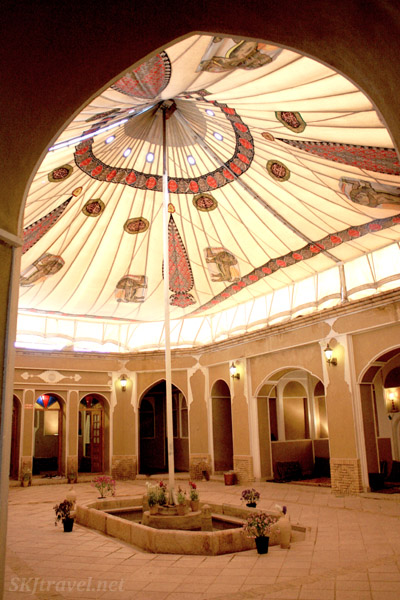 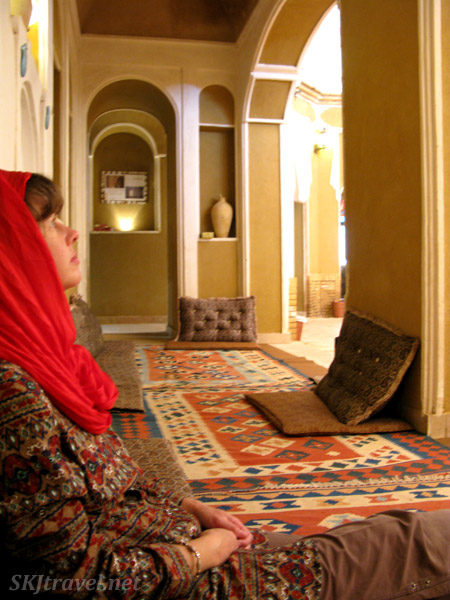 Then we drove to the desert to see the one thing I had requested be added to the itinerary the tour agency set out for us … the “kaluts.” These are natural sand sculptures formed by the weather elements over many, many years. It was too bad that it was a rainy afternoon because we couldn’t see the snow-capped mountains that rise up behind the desert, which would have made for a gorgeous backdrop behind the sand sculptures. However, as it was, the landscape had a very mysterious feel to it, and it looked like an ocean rather than a desert. The flat ground is covered in a layer of dark grey dirt which looks like ocean water with the large sand sculptures rising out of it like islands in the sea. It was actually pretty cool.

There’s a person in the first photo below for a sense of scale -- the little black dot you can just make out. He was the only other guy walking around the area besides us. I’ve included a pretty large representative sample of the sculptures for you. 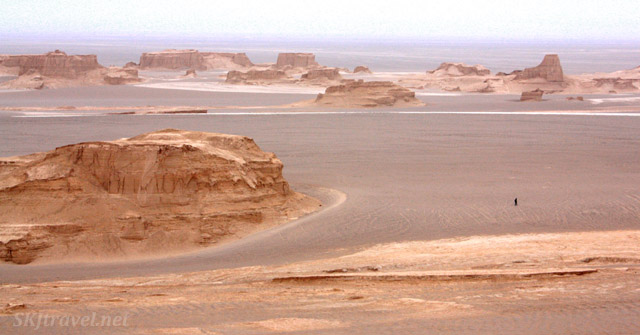 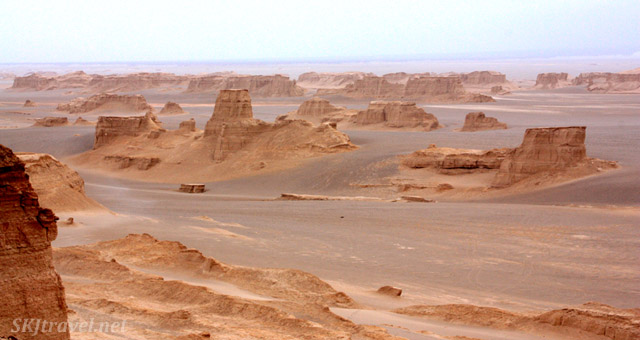 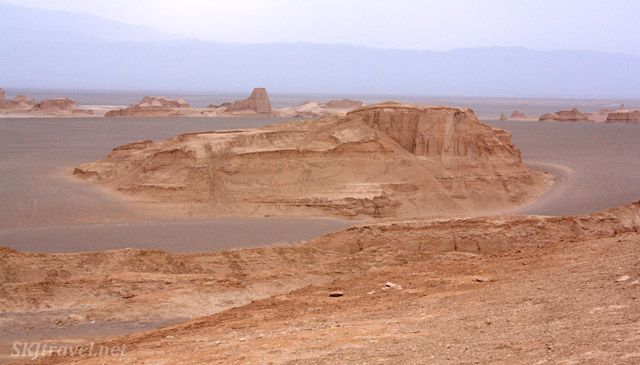 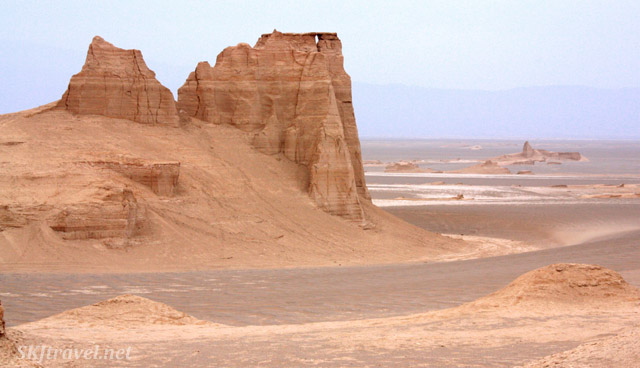 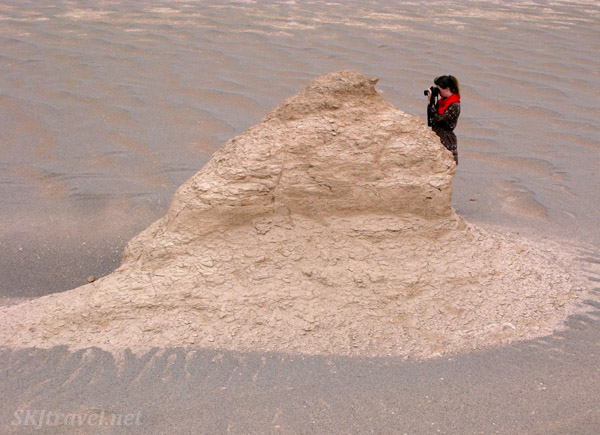 Then we spent another night with Reza’s friends. A new laser-tag venue had just opened up and they all wanted to try it. They had asked us last night if we would try it with them and despite our advanced age, we agreed. So we had two teams of 6. They all had great fun joking about the Great Satans and The Infidels from America, and how we should fight just me and Erik against all of them.  So there we were, old fogys in comparison to Reza and his friends (who are mostly late 20s), running around playing laser tag, which for me largely meant running around screaming as I was being chased. Reza’s brother was hilariously fanatical about chasing me and yelling, “Fire! Fire! Fire!”
The team Erik and I were on lost, and alluding to the many stone reliefs we’ve seen depicting Persian victories, Erik suggested we should lie down on the ground so the other team could put their feet on top of us in triumph. I told you earlier that what we learned about the ancient motifs would become relevant in our lives ….. :) Anyway, they found that very humorous.

Then dinner at the café next door with a large and rowdy group of friends. It wasn’t as engaging for me and Erik as the previous night in which we talked all night; here we were more observers of the others, but it was interesting nonetheless just to see the lives and interactions of friends in a culture made out to be so foreign and inhospitable to Americans, which could not be further from the truth. They’re just like friends everywhere and friendly to us. We felt kind of honored just to be allowed to be a part of our guide’s regular life for a couple nights as he stepped out of tourist-guide mode. Though he has taken other tourists he likes to meet his parents and friends, I do believe we are the first ones to infiltrate so deeply. That makes me happy. We do get along pretty brilliantly.

Reza teaches me phrases to say to his friends that he thinks they will get a kick out of. So I told the woman who hosted us the previous night that she was very pretty. Indeed, she got a kick out of it. When he first taught me this phrase in the car, I didn’t know whether or not I could trust him that I was saying something complimentary. So he said, “Call Samira and see!” So I called his friend that we met in Shiraz and told her, and confirmed Reza was not playing a joke on me. (that was actually the second time I called her on the phone … the first time to tell her we were going to kidnap her another night in Shiraz … I also think we are probably rare ones to be calling his friends)

So it was a late night again and subsequently, a groggy morning. But we got up with a fresh load of clean laundry. The night before, we submitted a week’s worth of both Erik’s clothes and my clothes, and I think we rather staggered the staff with the number of items we submitted to them, usually people probably have only a handful of items cleaned. The guy standing at the door holding our finished clothes on hangers exclaimed, “This is heavy!” We had them all dry-cleaned for about $20! Insanely cheap.

Then we walked through the old bazaar area of Kerman and saw an old bath house which was really nice, the nicest of the two we visited in Iran. Both of them utilized wax figures to demonstrate the activities that took place in a bath house. Somehow this amused me. Recognize one of the figures? 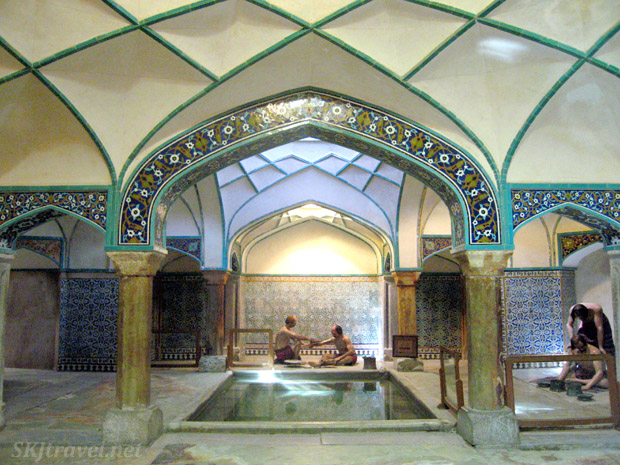 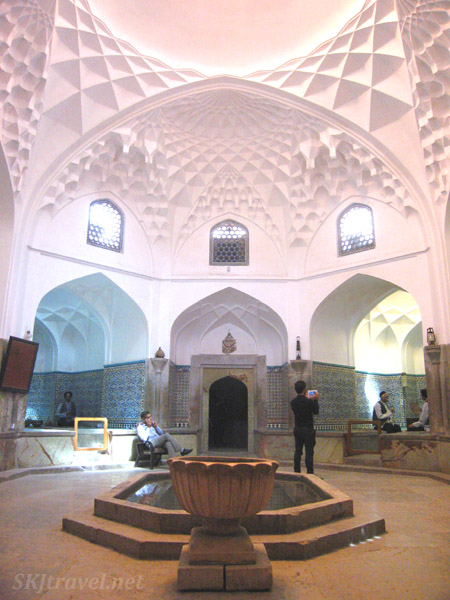 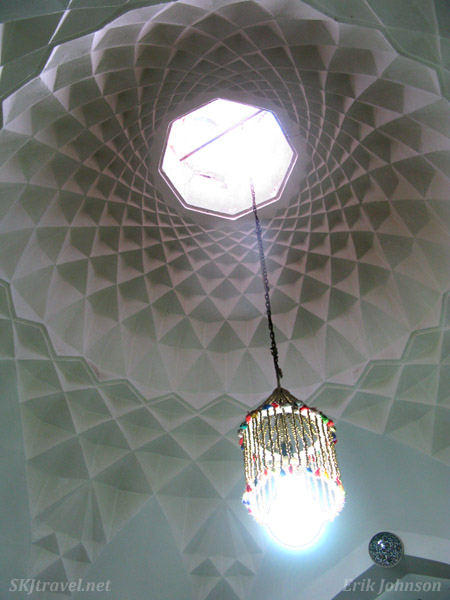 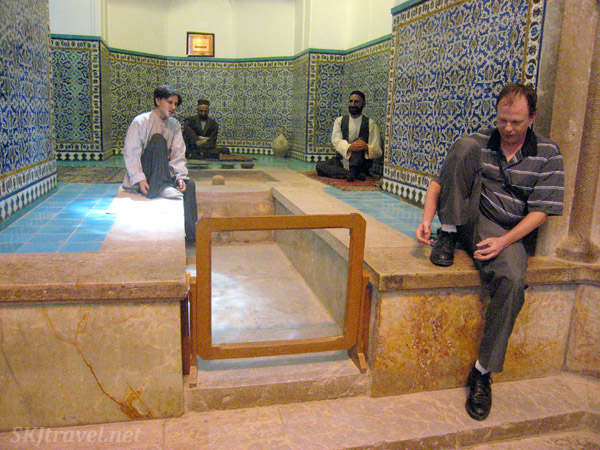 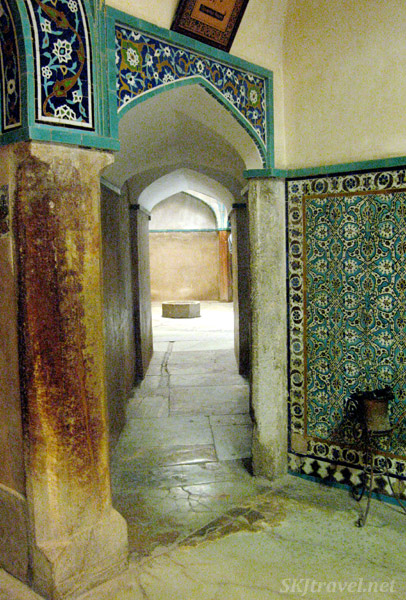 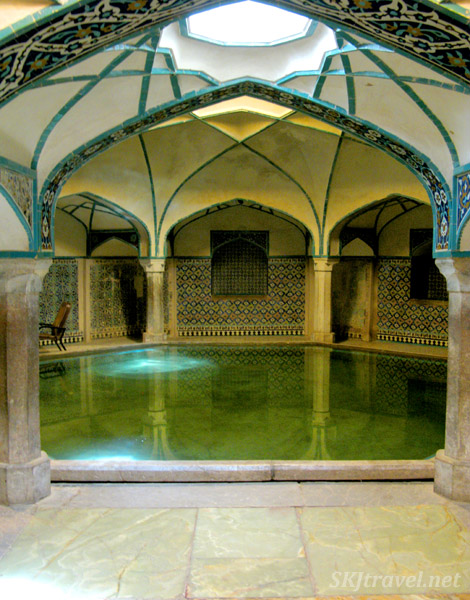 We finished out our tour of Kerman visiting a tiny mosque with a stunning ceiling. Of all the places I have wished for a wide angle lens on my camera, Iran is where I did it most often and most fervently. 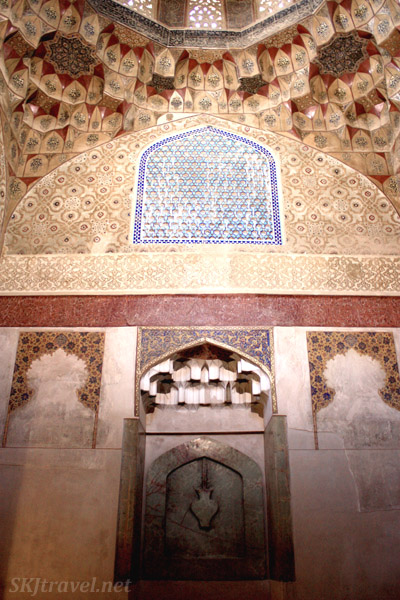 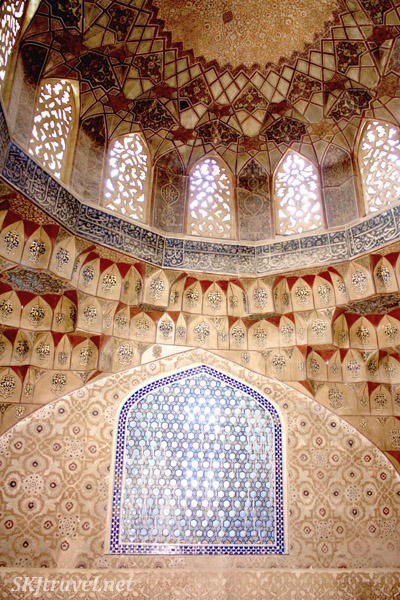 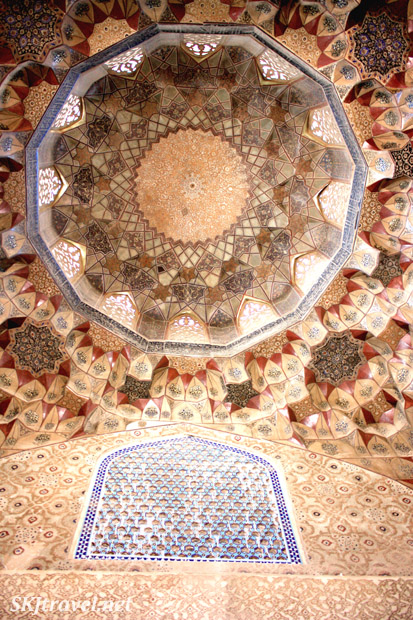 Then we picked up some deli sandwiches to eat on the road to Yazd. Stopped at a roadside mosque/convenience store complex to eat on a bench. The scenery while driving is pretty unremarkable, partially due to the continuing haze which obscures the mountains in the distance which, judging from their outlines you can just make out, must be impressive. So I’m actually getting most of my writing done while in the car on my laptop.

Coming up next, the city of Yazd.