Prague 1: Home Base at Pohorelec

New post for the Central Europe Archive! I never made any about my solo time in Prague, which is when I took heaps of photos. So I've decide to throw together a few photo-heavy posts about Prague.

I attended the Prague Summer Program as a student in a two-week writing program. Yes, I'm a little old to be a student, but this program is for all writers both inside and outside of any current academic status. In fact, I made several good friends in my advanced age group. Because I was attending only two classes, I had loads of free time to myself in which I wandered, often aimlessly, through the city with my camera. Students were given public transport passes, so I could ride the trams anywhere. I lived in a very Communist-stye dorm just off the Pohorelec tram stop. My room was just a tiny cement cell which shared a bathroom with 5 other cells. But really, it was all I needed.

Here are a few photos illustrating my typical route to class, about a 20 minute trek including tram time and walking time from my dorm. You can see how horrendously crowded Prague is in the summer (this was in July). I would like to come back some day in the off season. I had to walk right through the center of Old Town Square. The old town hall has a giant astronomical clock on the outside. On the hour, little figurines emerge in an animated routine. I have to say it's one of my favorite parts about old European towns -- the animated clocks. I just think how wondrous and magical they must have seemed back in the day when they were created. If I were a kid in Prague, I'd be making me a bowl of popcorn at noon every day to sit and the watch time pass in a clock maker's dream. 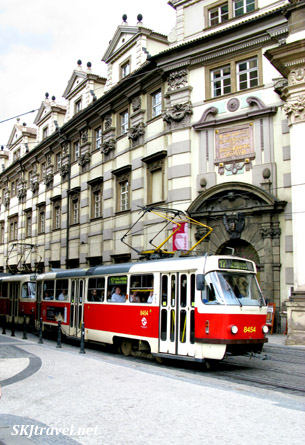 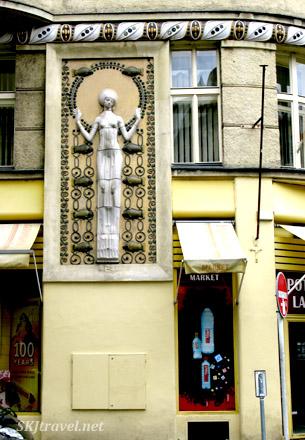 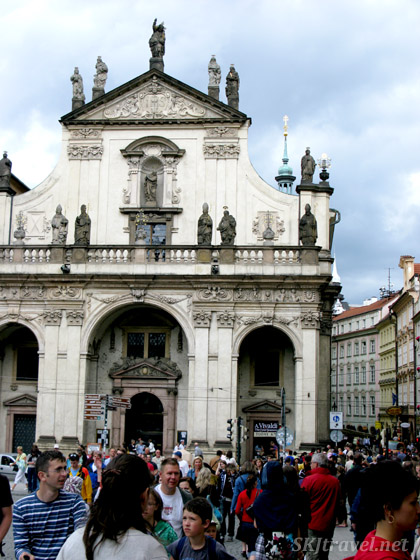 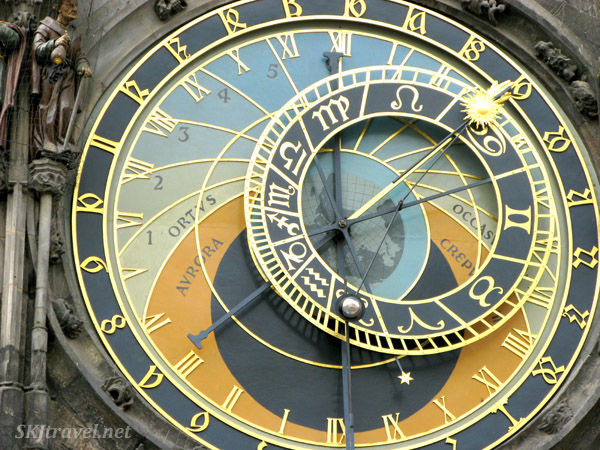 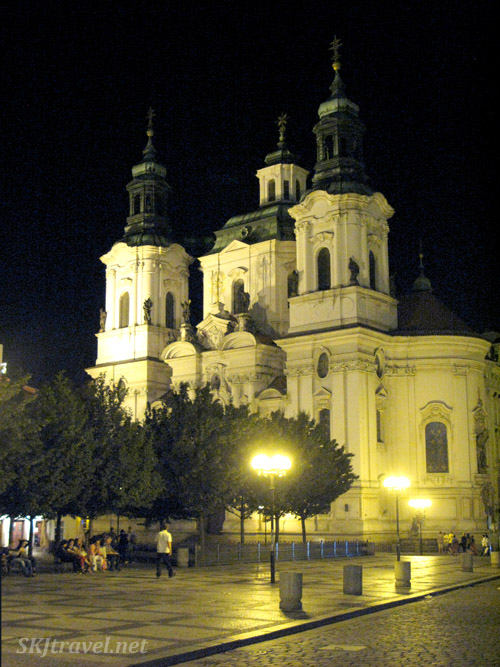 Near my home at the Pohorelec tram stop is the Strahov Monastery which includes a beautiful library and a delicious beer garden with beers brewed by the monks. They had a marvelous tamave pivo (dark beer) I loved to sit and sip. Though they had a lantern outside saying "Budweiser," which was originally conceived in Czech Republic and horrifically maimed by Anheuser Busch in America, they sold only good ol' monk-brewed beer. One of the most amusing sights I saw was at the church in this monastery complex. A couple was getting married inside when a large bus of Japanese tourists pulled in and emptied out. They all crowded in to try to see inside the small windows set in the doors to get a glimpse at the wedding. When the bride and groom burst through the doors, they were overwhelmed by a sea of Japanese strangers who immediately started clapping and cheering. They stopped in the courtyard for their photographer to snap some shots of them, and several of the tourists lined up beside the photographer to snap their own photos of the Czech couple. And then ... the inevitable ... the Japanese tourists wanted to have their photos taken with the bridge and groom. The latter tried to be gracious in this regard, but bless them, they were clearly antsy to blow that popsicle stand and get to a reception with their friends and family. 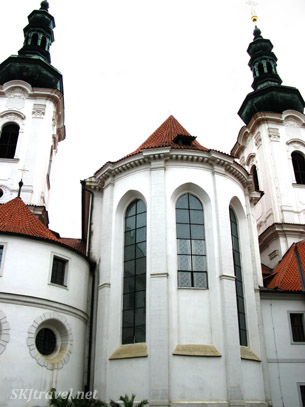 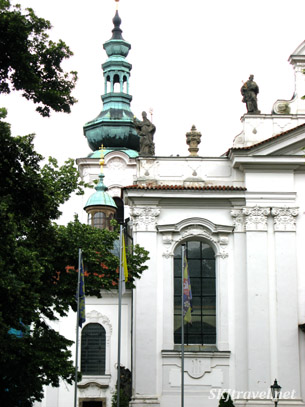 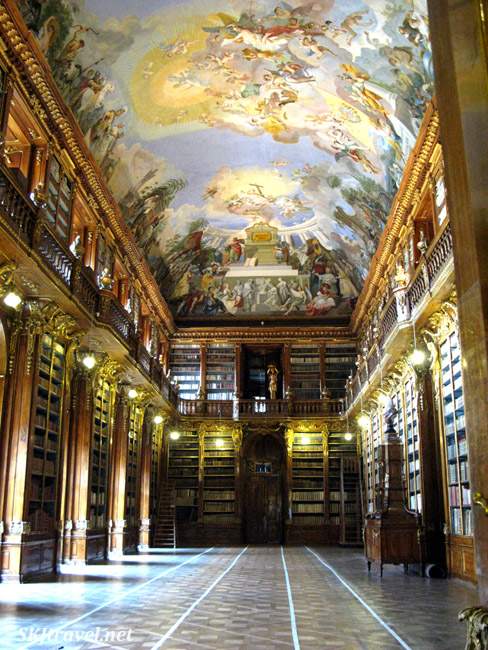 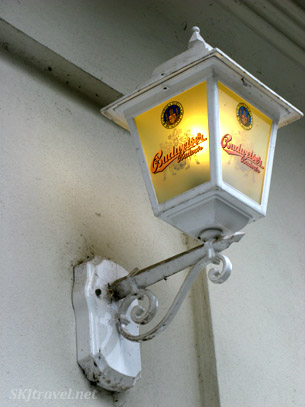 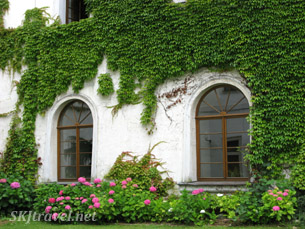 There were two routes I could walk downhill from Pohorelec into Old Town. One route took me by Prague Castle and the other took me along the edge of a park with fantastic views over the city. I loved winding my way through the streets and alleys with no rhyme or reason when I had no place to be. Even the simplest street was picturesque to me. 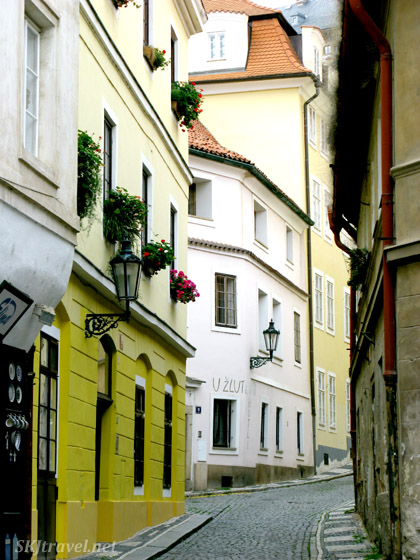 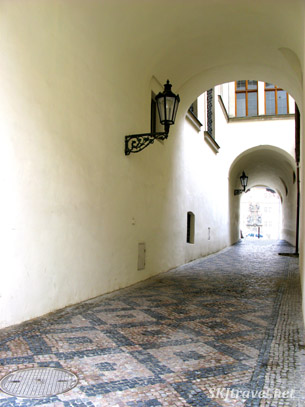 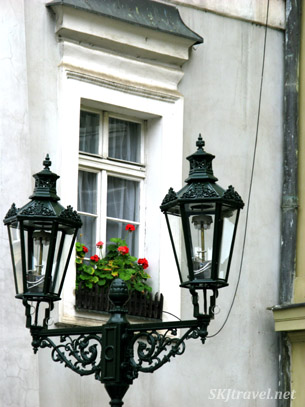 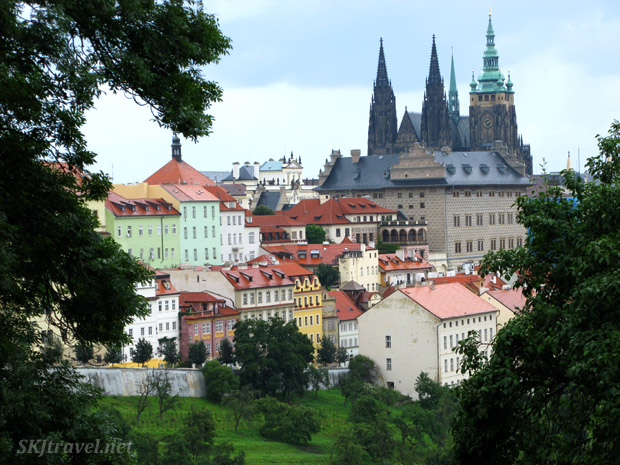 The Jewish Quarter was one of the first places I sought out to purposefully visit. I love old cemeteries and there was supposed to be a particularly interesting one. There are two sections of the quarter, the new and the old. First below is the new synagogue with its almost whimsical exterior and vividly painted interior. I spent a little time lying on my back in a pew gazing at the ceiling. Below that is the old synagogue and the cemetery. Stolen from the text with my cemetery photo in Friday Photos: The most unique thing about the cemetery is that when it ran out of space centuries ago, the Jewish population was unable to purchase more land for it and so they simply added layer upon layer of dirt, bodies and gravestones. Heaps and heaps of gravestones were erected millimeters away from one another, and eventually on top of one another ... it's a remarkable forest of gravestones, now many slanted or toppled, some the engraving is worn clean away, tree trunks grow around others. 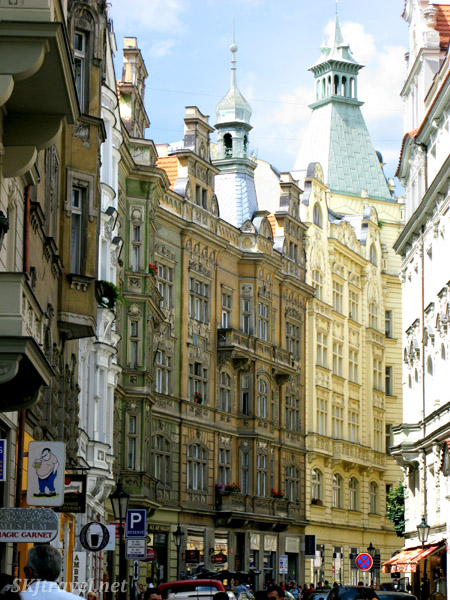 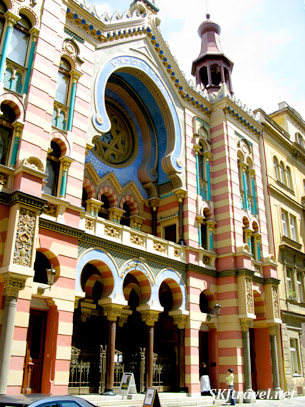 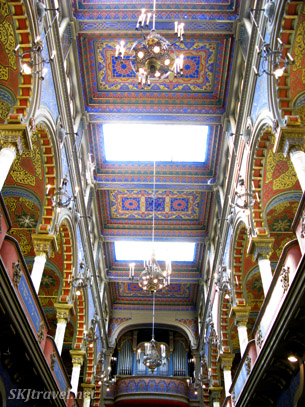 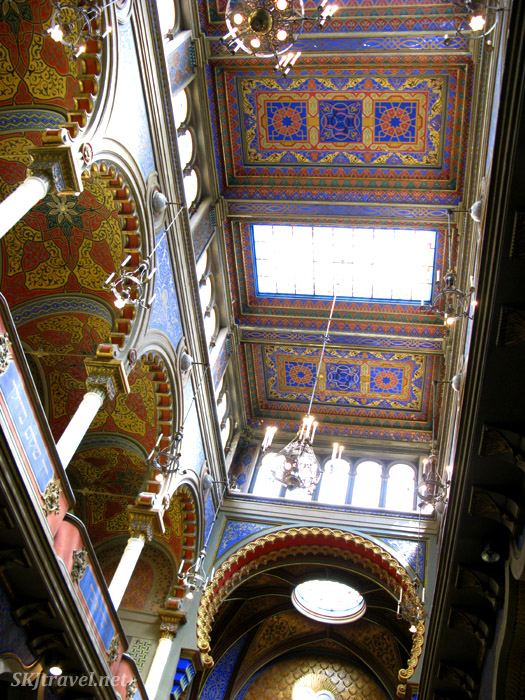 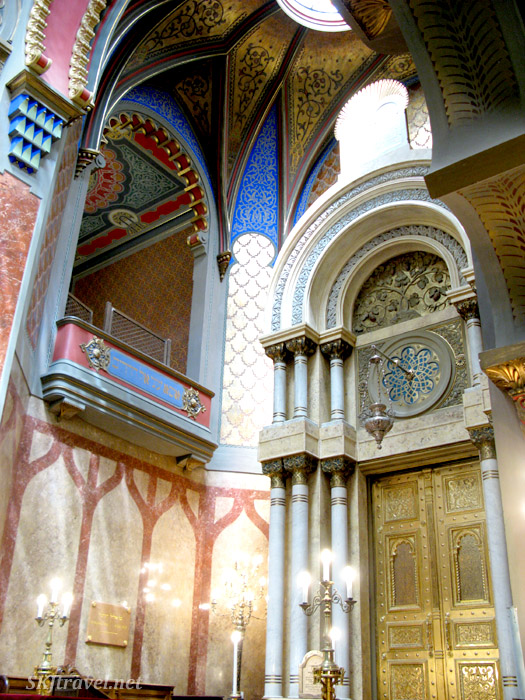 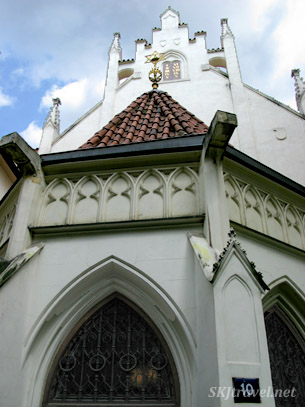 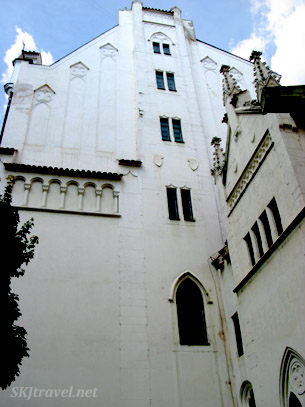 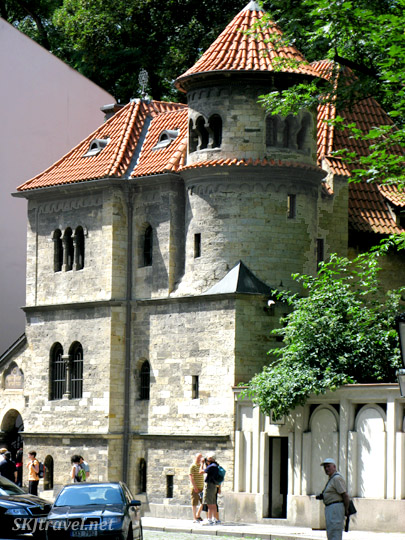 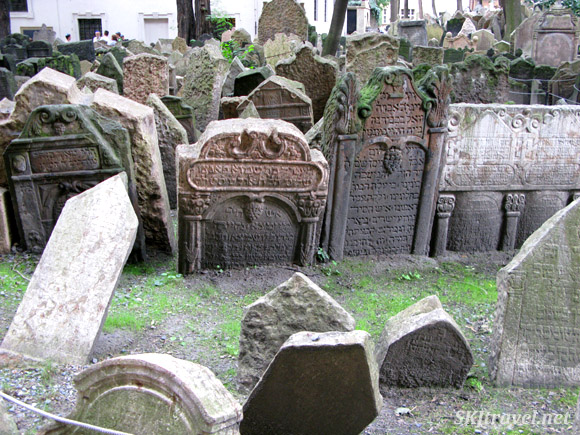 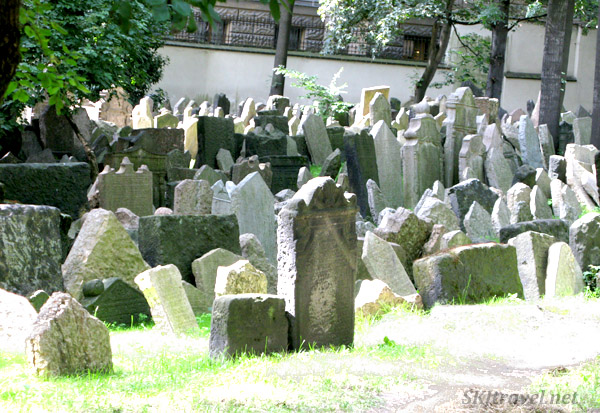 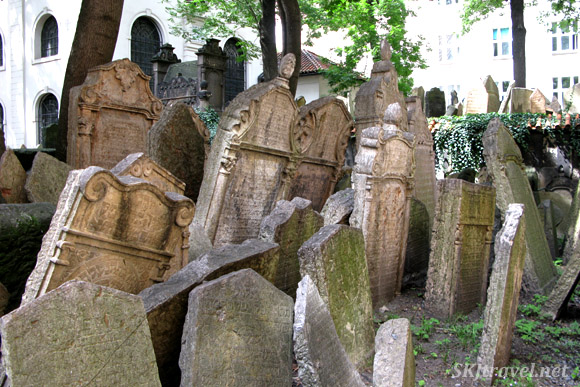 Prague has definitely capitalized on one of its most famous citizens, Franz Kafka. In addition to a museum, there are busts and statues scattered around town, as below, and Kafka everything you can imagine in souvenir shops, Kafka this Kafka that. I happen to be a big fan of Kafka, so I found it amusing. I really liked the museum, and whoever designed it made a stab at representing a Kafka-esque mind in the layout of the rooms. Lots of interesting information about him I never knew. One of them being what a well-adjusted person he came off as in society ... very popular with lads and lasses alike, not some weirdo brooding in the corner. The kid playing with the anatomy of the fountain is just outside the museum. While lots of college kids thought they were hilarious posing in rather more rude positions with this fine, upstanding statue ... I'm sure I scarcely need to provoke your imagination ... this kid was completely oblivious to anything but the fact he was controlling the stream of water (the object he's holding did indeed move around, one could position it in a wide range of settings). 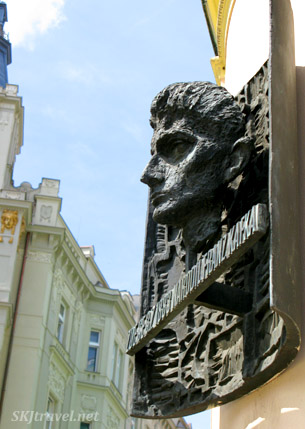 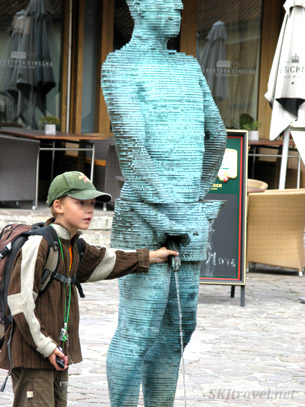 So I'll stop here for my first installment on Prague. A city in which I had an absolute ball. More to come.
*