So this is a wrap-up for me from my time at Keepers of the Wild animal rescue sanctuary. It’s the usual last post from home of favorite and overlooked photos … it’s hard to see on my small, scratched-up “notebook” laptop while traveling. An exciting note:  the unlikely friendship of Anthony the Lion and Riley the Coyote, which I mentioned in my post, "Big Cats in the Desert," was featured on the television series, Nature, on PBS on November 7! This episode covers inter-species bonds in the animal kingdom. Anthony and Riley are a perfect illustration. You can watch the full episode online. 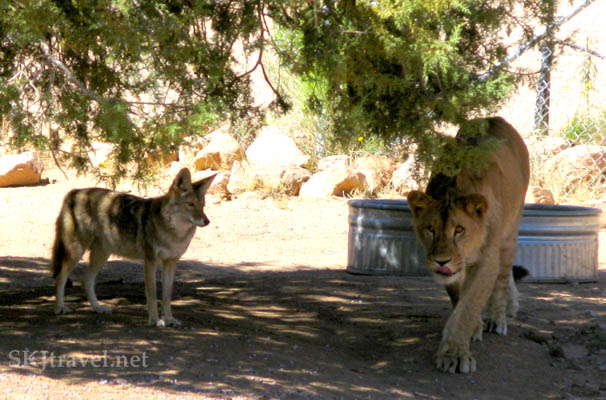 But back to me ... Flying between Denver and Las Vegas, the closest airport to the sanctuary in Valentine, is one of the prettiest flights. The aerial views of the Rocky Mountains and the dramatic desert and canyon country of Arizona are spectacular. I usually zone out on airplane rides, but on this trip I was perched at my window, sunglasses on, camera in hand, until clouds eventually obscured the views. Meanwhile, they guy next to me huffed and puffed in exasperation trying to get the TV on the seat-back to accept his credit card. For like 20 of the 80 minutes of the flight, he worked on this. Finally success! Satisfied, he sat back and crossed his arms, a football game now filling his screen … and promptly fell asleep. For the rest of the flight. A $6 nap.  Here are some aerial views: 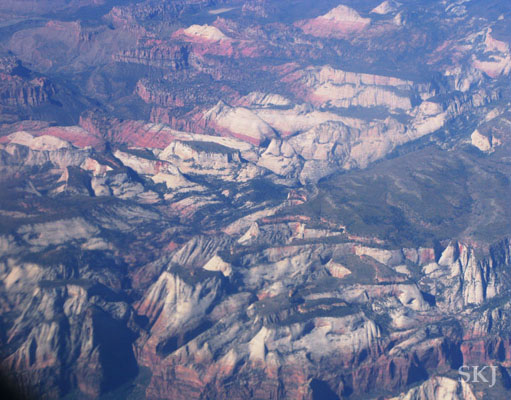 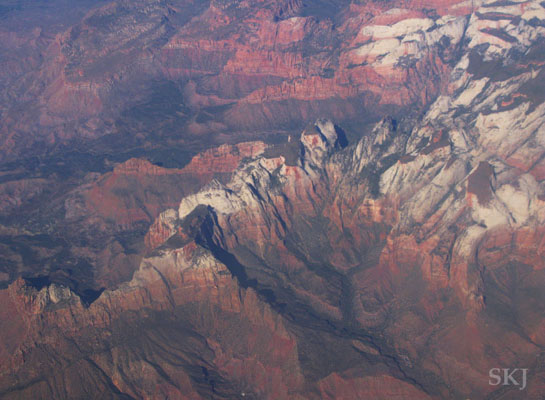 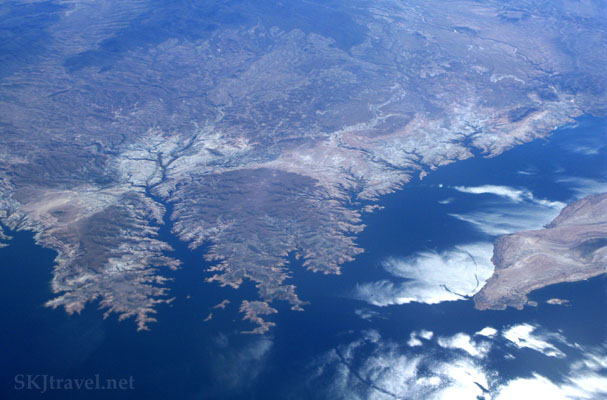 In other transportation news, I spent more time in a golf cart than I have in the previous … umm… 28 years? … of my life. Yes, there have been only 28 of them. Anyway, it’s how we got quickly around the sanctuary -- in silent, electric golf carts. Doreen was my chauffeur, otherwise I walked. Here she is deftly pulling a 5-point turn around. Though he typically works as an African safari guide, Mat Dry can also double as a golf cart motor when the electricity runs dry … I wish I’d acquired a photo of him pushing two ladies in a golf cart uphill past a row of foaming-mouthed tigers growling for their dinner. Good caption fodder. 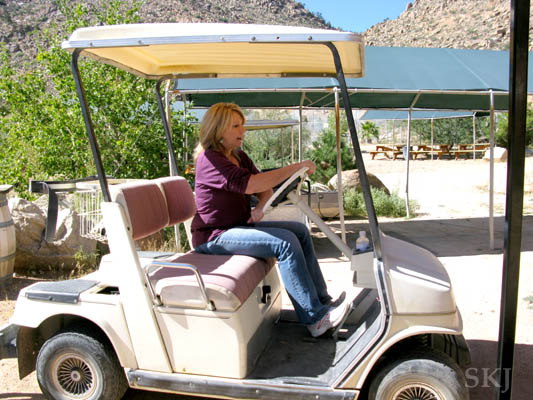 So you’ve met a lot of the animals … who are the people who have dedicated their lives to rescuing them from desperate and undignified situations to give them fresh air in their lungs and real earth beneath their feet? Tina and Jonathan, on either side of me below, are the founders and the life force behind the sanctuary; they live on the grounds and graciously opened their home to me – a perfect stranger upon arrival – and Doreen. 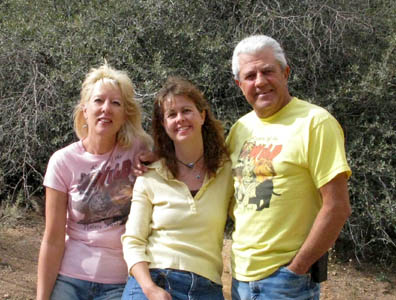 Their home is filled with the continual romping and ruckus of little Boris, a recently rescued kitten, as he terrorizes the other six kitties and the dog who live there. Few things are more terrifying than a manic kitten. It was pleasant beyond all reason to sit out on their porch with a nice cold beer in hand listening to the lions and tigers not far away, and the enclosure for two leopards came right up to the back porch, where a black and a spotted leopard would come to the fence to see what was going on. Leopards in front, lions behind, a cold beer in hand ... and the lonesome train whistle. Yeah, that's the weird part ... (singing the tune: "one of these things is not like the other ones") ... beautiful rugged quiet landscape to fill the eyeballs; sounds of the wild, of beasts and predators to fill the ears; it all seems so earthy. Then "WHOOOOT!"  Here comes the train through the valley, the tracks just across the road, rumble rumble rumble. Just like the set of an old Western movie. I like trains. Quite a lot, actually. But that whistle scared the behooha out of me on several occasions. 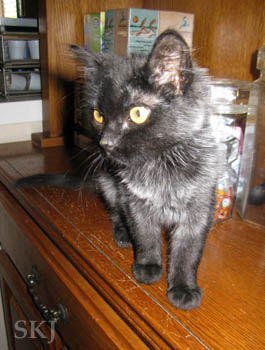 What a lovely-looking bunch of ladies, eh?! From left to right: me, Doreen, Dawnie one of the awesome caretakers, Nichole the awesome all-purpose administrator, and Tina. 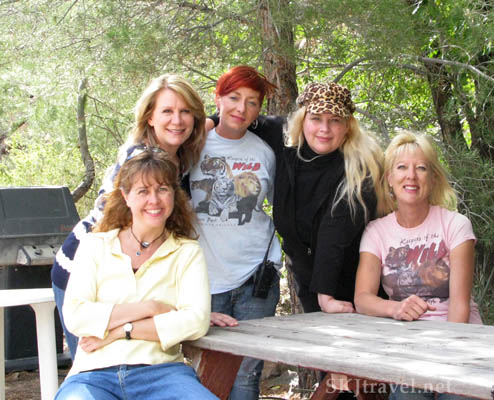 Though tigers are the primary beneficiary of the sanctuary, there are, as you’ve seen, lots of other critters -- "exotic" creatures such as many monkey species being sheltered here (looking innocent and saying, "who me?"); shall we say “semi-exotic” creatures, like the pair of iguanas; and “plain” creatures including even a pig and ducks and pygmy goats have found asylum here. At night, the iguanas were so cute -- a caretaker would pick them both up and hold them tummy-to-tummy until they latched onto each other like magnets, then bring them inside to the heated reptile room to spend the night. You may remember that I fell in love with iguanas earlier this year in Mexico. Was pleased to spy them here in an out-of-the-way cage not far from my nemesis and mortal enemy, Billy the Baboon. 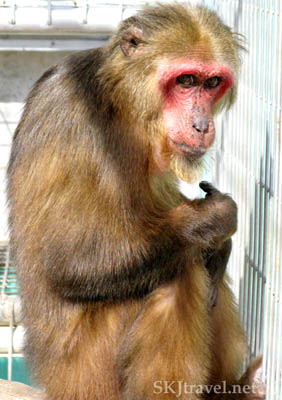 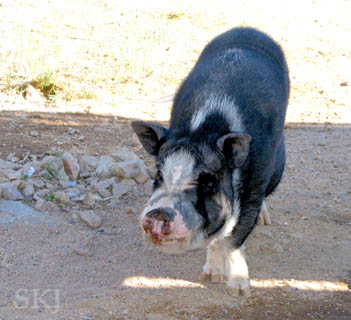 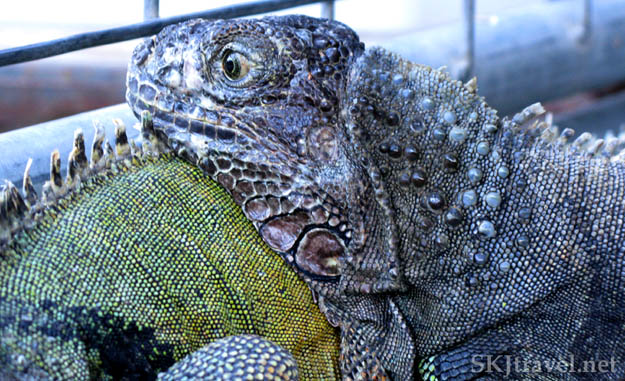 It was a short trip, and I’m down to my parting shots.  Since Keepers is primarily a rescue sanctuary for show tigers in the entertainment industry, let’s look at a few more tigers, afterall. This silly tiger always eats her dinner inside the water tank. She catches her chunk of meat thrown over the fence and immediately trots down to the tank, climbs in, and begins the feast. 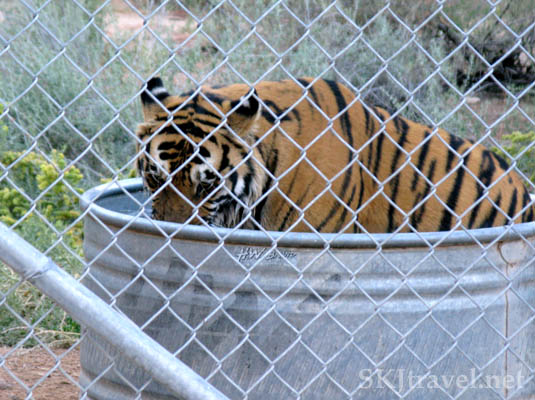 More tigers at feeding time. I just don’t get tired of capturing the intense gaze that radiates from those large eyes. Tigers, I believe, in every way are the most beautiful cats. 'Tis my humble opinion. Fun caretaker fact: when working around the tigers, cleaning their habitats, retrieving feeding trays, etc., it's not uncommon to get a courtesy tiger-pee shower. "Oh yeah, it's great," one of the girls told me. "You're all hot and sweaty from working hard all day, and then top it off with some tiger pee." 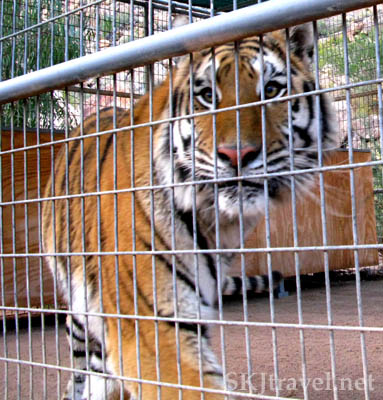 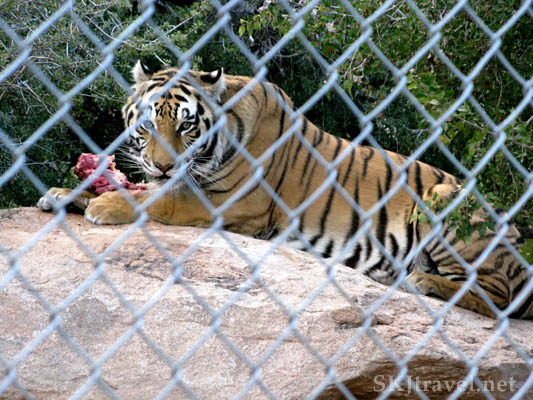 Not that lions aren’t impressive … Sultan’s really looking forward to dinner here, all foaming at the mouth. 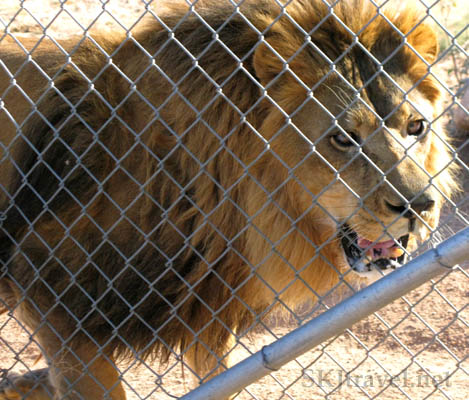 Though so much smaller than African lions and tigers, I greatly enjoyed the opportunity to watch the mountain lions, Bambam (below), Baby and Bandit. Although mountain lions actually live around my very own home in the Colorado mountains, I have never seen one. Evidence of them is everywhere, but they are like ghosts. Look at how well this cougar’s coat blends into the rocks … no wonder I never see them. My high school mascot was “cougar.” I guess they’re just a little special to me.  And as for bobcats, well, they’re so dang adorable. 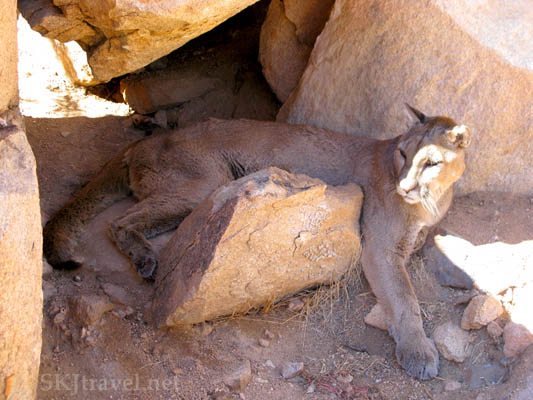 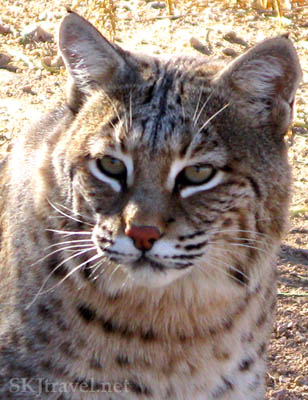 And who would have guessed, but actually my favorite photo from this expedition (besides me with Sampson) is not of any of the loveable mammals … the gorgeous cats or the personality-driven monkeys … it has turned out to be a portrait of one of the most feared and loathed creatures to inhabit my psyche … a snake.  But check out the amazing color patterns on the scales, and what I think is most cool of all, is the reflection of the background behind me in the eye … blue sky with clouds and pine forest with rocks. Also notice the freaky spittle on the chin. I took this with my G9 on the macro setting … which means no zooming in, but having to physically hold the camera literally a few inches from the subject. This is a big step for me! 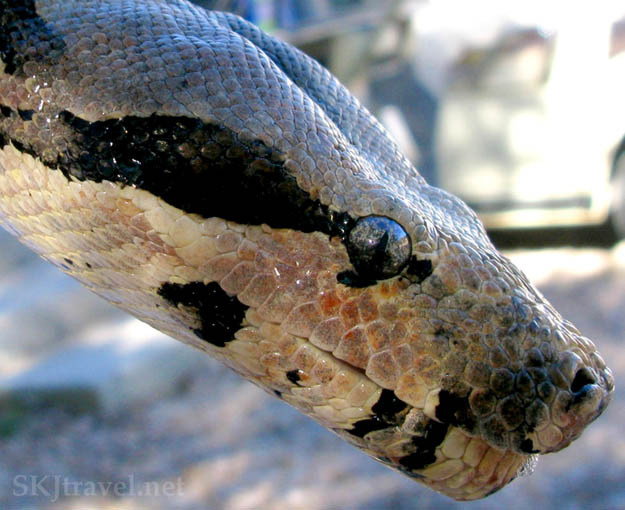 And last but not least, I end my post with an exciting update … for it is a never-ending mission at Keepers of the Wild ... as of today there are three new rescued tigers at the sanctuary; they are Sampson’s former show mates. If you're on Facebook, check out the Keepers page to see photos of how the sanctuary busted ass to prepare for them on short notice, and to keep apprised of the tiger’s adjustment to their new-found relative freedom and the fresh air of the beautiful Arizona desert country. Reports are that Sampson greeted his former show mates with obvious recognition. Licking his nose here, just swabbed with healing ointment, is Sampson, freed from cage and shackle, joined now by those with whom he has spent his life and feline affection.  :-)  I love a happy ending. 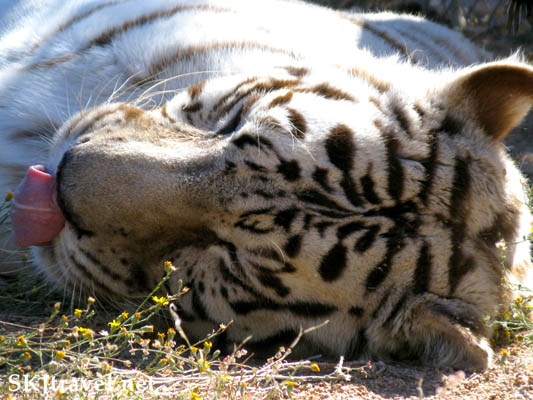