Wrapping Up a Nice 5 Weeks

It was nice to come back to Prague, return the rental car and relax a bit in our sweet budget pad right near the Charles Bridge, especially when knowing the city well enough to have it feel slightly like a homecoming.  So our cheapo rental car saw us through our travels just fine despite the “check engine” light being lit for half the trip. It was a little jarring to be back in the hustle-bustle of big-city Prague, bursting at the seams with tourists (and tons of English-speaking tourists), after our time in small-town and rural Slovakia. But we adjusted. Spent a day touring the massive castle complex and another day finding some loose ends — Erik and I showing each other things we'd found on our own back in July.

When driving into Prague from Brno we gave a lift to a young couple who were art students in Prague, they were hitchhiking back from having had an exhibit in Brno.  They told us about an exhibit in the city gallery that we subsequently checked out; it was mostly video footage dealing with various aspects of revolutions against communism or other radical freedom movements around the world. So we spent several hours there with some very interesting material. One film featured a taxi driver in Albania who used to be responsible for filming the communist government’s public speeches. Asked what he thinks about being a “lowly” taxi driver now in a city with somewhat dangerous streets, he said that now he has small fears: fear of getting robbed or stabbed, but these fears have an end, i.e. they are short, isolated events that would be over and done with and you move on; during the communist era, he had perpetual fear, because any little thing he did wrong that might offend a party member could affect him and his whole family in severe and macro ways, and these fears, he said, “would be over only at death.” In short, he prefers driving a taxi.

Weather in the day was a bit hot, but evenings were all splendid and we strolled the streets at night — the city is so pretty all lit up at night. 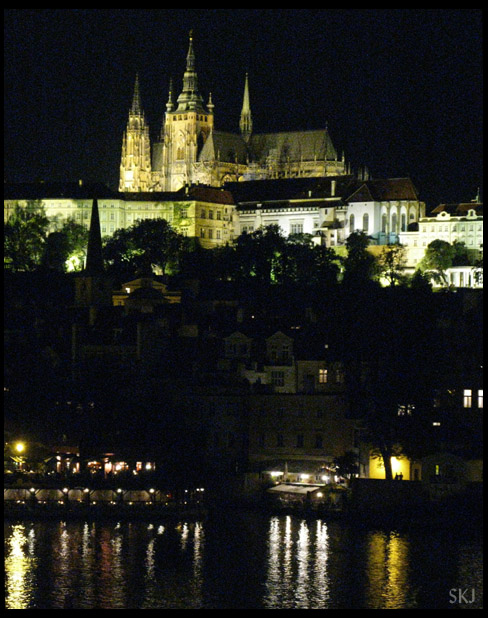 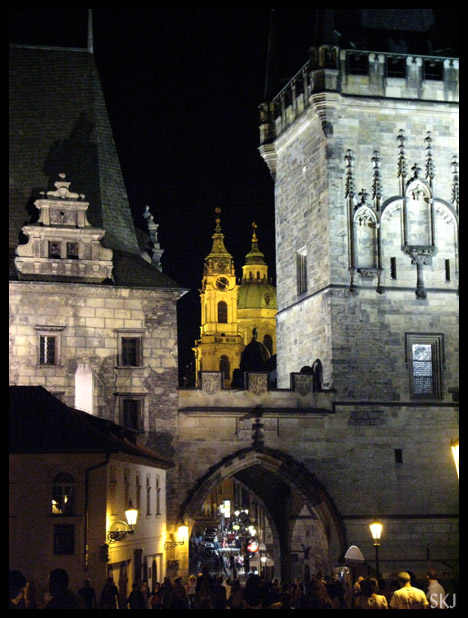 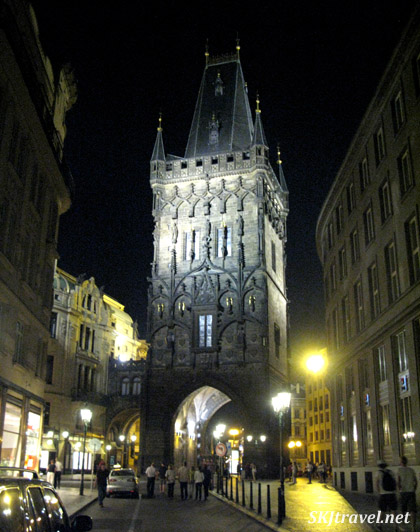 On our last day we met Peter. I don’t remember if I mentioned him before, he was a high school exchange student with my cousins several years ago; he lives outside Prague and attends university there now, and he and I met a couple of times back in July when I was in the writing program. We met for lunch, he took us to a yummy and cheap Indian food place he said is his favorite place to eat. On a whim, after chatting for awhile after lunch, he asked us, if we didn’t have plans, would we like to come see his parents’ house. So he called his mom to say we were coming. When we arrived by bus about an hour and a half later, she met us with ice water with fresh fruit and mint leaves in it, chocolate-filled pastries, and dishes of ice cream with whipped cream, nuts and fresh picked berries from her copious gardens. Their house used to be a butcher’s shop/house and is 200 years old, and they’ve done a beautiful job remodeling/repairing. So that was fun to visit another town. 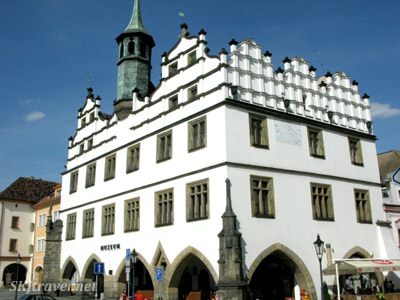 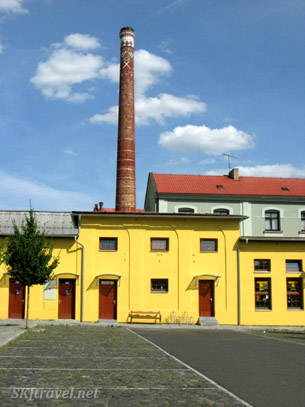 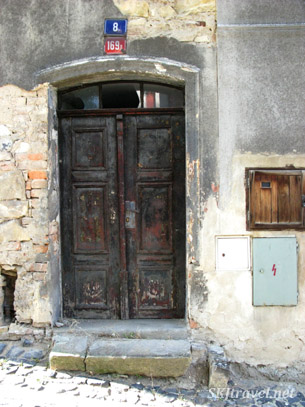 Peter gave us a little tour around the town, and then it happens that the next town over is Terezin, a former Nazi concentration camp. We stopped briefly there. Even a brief time was enough to put a knot in my stomach. We had decided not to go to Auschwitz when we were in Krakow; in a weird way I’m kind of glad we got a glimpse, then, at Terezin. It seems almost obligatory to see firsthand the horror that gripped that land when it’s still such a relatively recent part of that area’s history. To see the red brick complex standing so peacefully, stoically, indifferent, is unnerving. It might almost be easier to accept if the architecture was somehow unique and grotesque, but it’s just a plain utilitarian complex, the only thing out of the ordinary from some other type of industrial or agricultural processing plant is the wide moat surrounding it. In terms of concentration camps, this was small and mostly a transfer station, it was not a “death camp;” a little less than 100,000 Jews died there, mostly from malnutrition, disease, exposure, etc., consequences of the extremely cramped conditions. Even so, it left me cold and revolted. 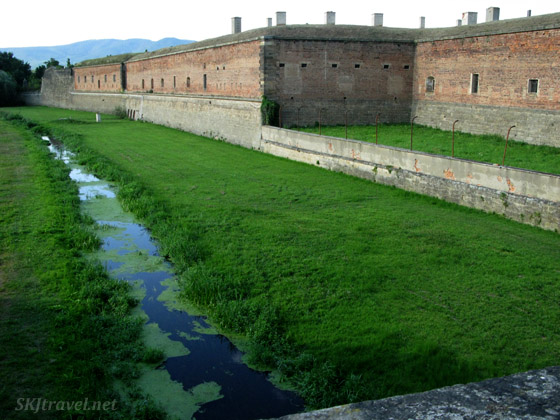 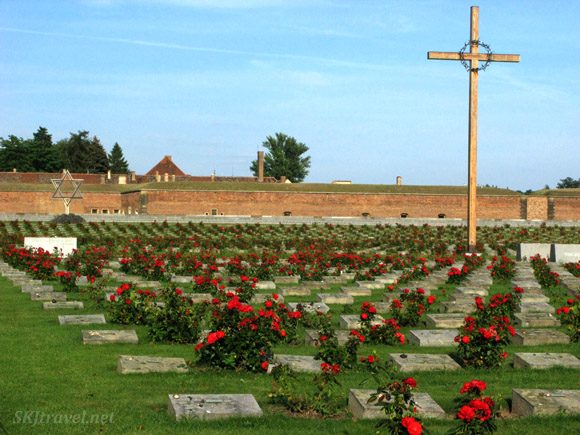 Well, that’s about it. The biggest lesson we learned driving these parts is to buy a map of all large cities. Written driving directions supplied by hostels/hotels are ridiculous to try to follow. Our favorite of the large cities was undoubtedly Wroclaw (Poland). (speaking outside Prague) We’d recommend Prague to anyone. And we’d recommend Slovakia to anyone and recommend to see it sooner rather than later while it’s still off of the popular tourist radar — beautiful scenery and hiking and some excellent castles.  I’m sitting at a pub in the Toronto airport typing this on our way home and the waitress just brought us a tall glass of ice water! This is very exciting on many levels: water that’s (1) cold (2) large (3) free.  We enjoyed our time in Poland, but it’s hard to comment too much on “Poland” as it is a large country and we were in a relatively small portion of it. But the overall feeling one gets from the whole region we traveled through is two-fold — you can’t help but get a feel for the medieval times for which that region is famous, with its prevalent gothic architecture, a cathedral and clock tower in every town center, small towns very contained (not sprawling) dotting the rolling countryside, castles sprinkled liberally throughout the region.  But also, you can’t help but feel gripped by the very recent history of communism and revolution. One good thing to be said of the communists in this area is that they were at least kind enough to build their hideous gray prison-like apartment complexes at the outskirts of existing towns, and didn’t raze the historic buildings to rebuild over them.  But it makes for striking juxtapositions of old city centers and communist buildings at the outskirts, many of which are now being “renovated” (repainted) to be more colorful and pretty on the outside. Strangely, there still exists a communist party in Czech Republic. Peter expresses fear at their numbers, but admits it’s comprised mostly of older people and so will likely die out.

The Charles Bridge is perhaps the primary icon of Prague. I walked it many times, always crowded, sometimes heinously so, except early in the morning ... like 4:00 am. For whatever reason, this first photo below always makes me smile -- the two little kids hunkered in the middle of the crowded bridge completely in their own world, entranced by the puppet dancing for them. 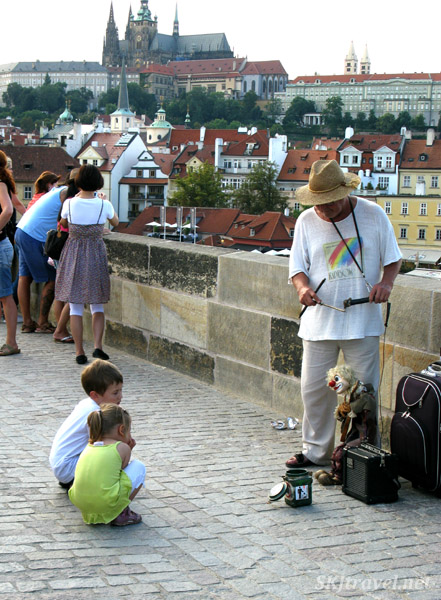 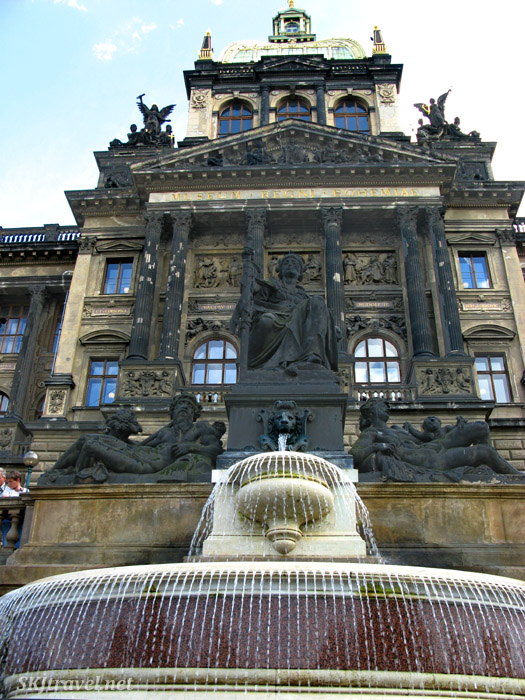 So no particularly adventurous adventures…. nothing like riding trains in China or driving through the edge of the Sahara in Tunisia. And I think I haven’t been very good at keeping track of events this trip… But all in all, it was a perfectly brilliant summer escapade. 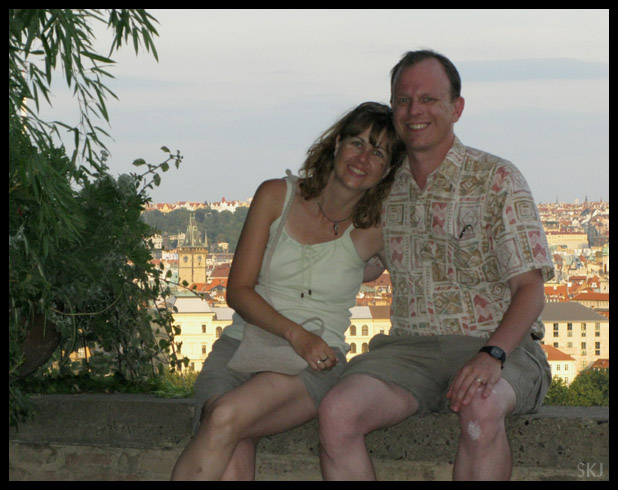 back to Central Europe