Three Moments in the High Tatras, Including a Baby Chamois 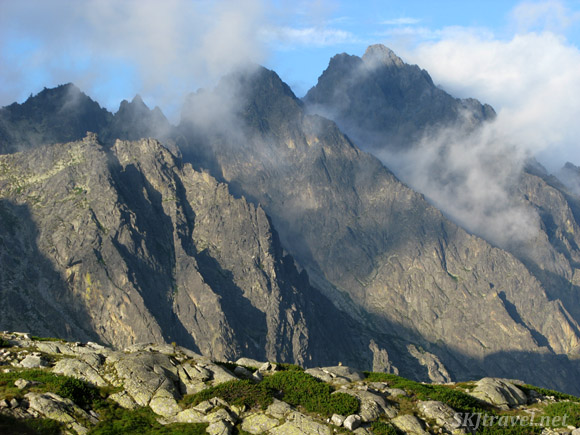 Well today was a day of three special surprises.  The first came at about 2:30am when I got up out of bed in our mountain chata to use the outhouse (pictured below).  By the way, the title of one of my travel essays is “At Night in the Loo,” because it’s actually a great thing to be forced out of bed by your body in the middle of the night to go outside. From my time backpacking and staying in various rustic accommodations, I’ve had many great experiences such as at 2:30 this morning, when I walked out and looked up at the sky.

After peeing in the loo pictured below, I walked up the hillside and laid down on my back to gaze at the multitude of stars. The Milky Way was brilliant. It was utterly silent (no generators or anything at the chata). But it’s a void of sound particular to high-altitude mountainsides, in which the silence carries the babbling water of melting snow across fields of small rocks, and the whisper of air caught in cul-de-sacs of sheer cliffs. You might think this contradicts the silence, but no, it’s just part of that particular type of silence. This is what makes me confident that god has not played a trick on me and somehow switched me over to some other reality…. that mountain silence is still the same. Lovely.  And plus, I saw a shooting star. 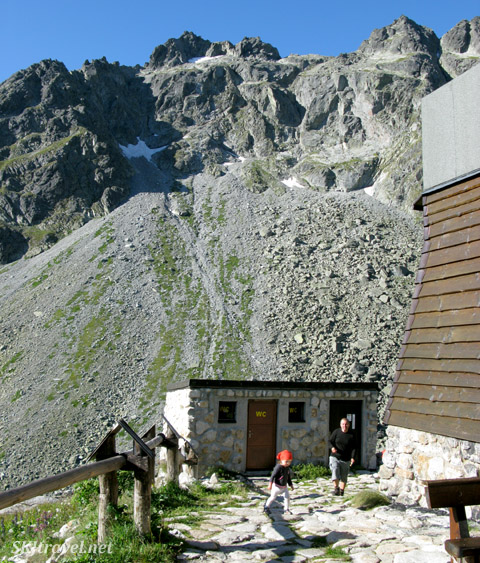 Second special moment was hiking down the trail early in the morning back to our car. We came across a mother chamois and baby. We’d seen photos of them at the chata, and the day before we’d seen two off in the distance. But this morning we came across the mom and baby right in the trail. We had left the chata earlier than most people, so in the chilly morning silence, we had them all to ourselves. We watched them for about 10 or 15 minutes. The little one bounding around and up sheer rock faces as if they were but mole hills, while mother watched patiently from the corner of her eye. Adorable. 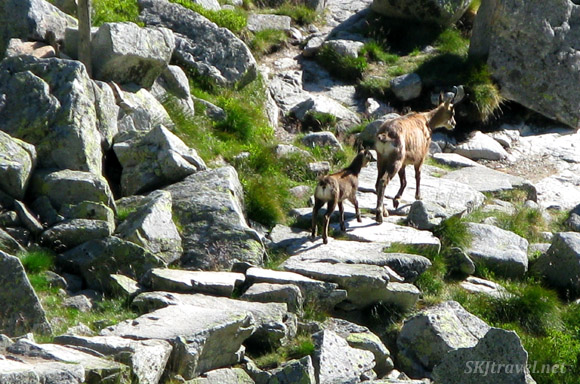 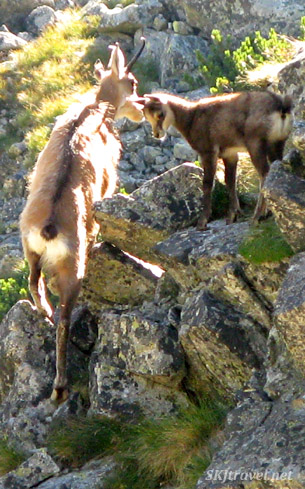 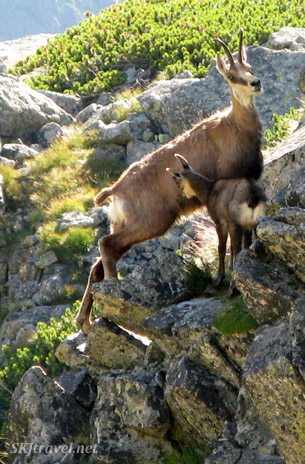 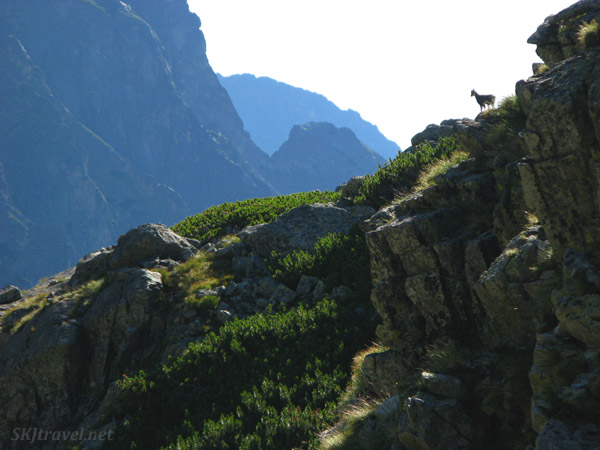 We drove to our next destination, Slovensky Raj national park. We’re quite upscale now at a real hotel that serves meals (lunch was delicious).  We took a short hike after lunch to a lookout point. The flowers are tall and profuse and beautiful, and some I’ve never seen before. The third special moment came here, when we realized we were amid a forest of raspberries. Raspberry bushes that were as tall as, sometimes even taller than, our heads, densely packed into a literal forest of raspberries. At home in Colorado, raspberry bushes in the wild usually grow between knee- and waist-high. This mega flora was really cool. Naturally, we ate a bunch of berries. Some of them tasted like they’d been soaked in sugar. What a treat! 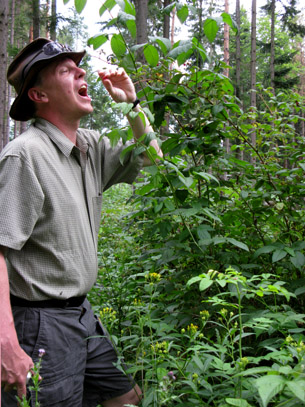 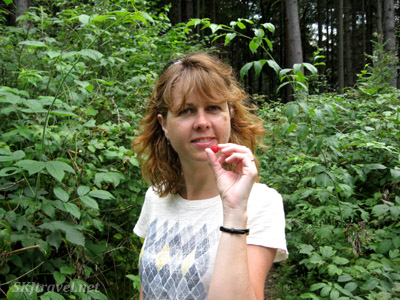 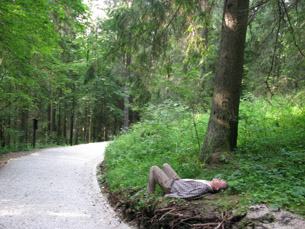 Above, Erik is recovering from near death ... we tried to make it to an ice cave before the end of the day. We parked at the little ticket booth shortly before the last tour was to begin. The lady told us we had to go all the way to the top of the mountain and would need crampons and oxygen tanks to deal with the high altitude ... OK the last part isn't really true, but damn when you're sprinting uphill unexpectedly to get on the last tour, it's really really tiring and feels like you're climbing Kilimanjaro. And the stupid trail kept going and going and going as if we were climbing all the way to the moon. Well, we made it by the skin of our teeth. But we were sweaty pigs from running and then we plunged into an ice cave for 30 minutes. It kind of freaked our bodies out. Erik had to lie down to recover after the tour. It was pretty neat, though, seeing stalactites and 'mites that are ice rather than rock, and huge pools that are ice rather than liquid water.

Below, yes, we're that immature we had to take a photo of a bus that said "fart" on it. 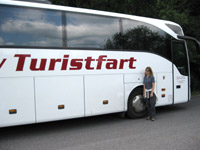 Below are a couple shots through the windshield driving to the ice cave along beautiful winding mountain roads. We passed through several small villages which pointed very poignantly to the disparity between the “gypsy” Slovak population and the more European population. The Slovak towns (dark-skinned people) are much poorer. Houses much more dilapidated and even abandoned. One in particular, its main street was lined with people standing roadside with buckets of blueberries and raspberries. But traffic through this town was minimal, and yet there were many people holding out these buckets. It didn’t even look like they had bags to put the fruit in. I guess you have them fill up your own bag.  Then there are towns that look much more kept-up and quaint and the people walking around those towns are all fair-skinned Europeans and nobody is selling produce on the roadside. But no matter where I am in the world, I always enjoy seeing work horses clomping down the road. 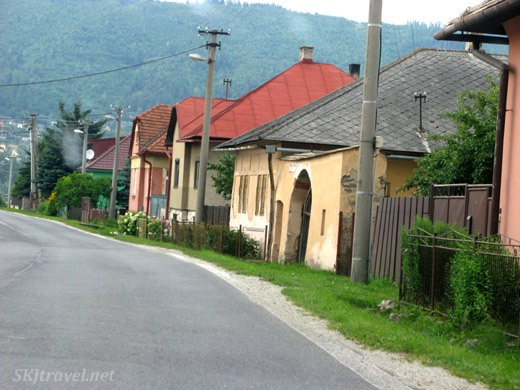 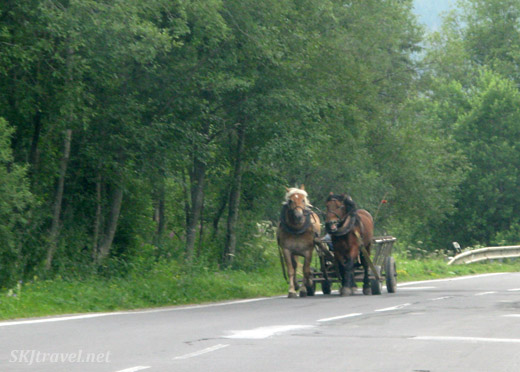 So now we’re in the little café of our hotel drinking nitrogen-tap beer (yum). I type while Erik watches swallows fly by out the window.  Assuming my knees still function tomorrow, we intend to hike all day again. It will be a very different atmosphere than hiking in the high-altitude Tatras ... almost like a jungle around here. Supposed to be lots of waterfalls tomorrow.