Happy in Poland: The Wonderful City of Wroclaw

I’ve been in Prague for two weeks attending the Prague Summer Writing Program, and Erik arrived a couple days ago. Having now rented a car and left Prague, the real adventures have begun, it would seem. Today’s adventure was driving into Wroclaw, Poland, with utterly ridiculous driving directions to our hostel which I downloaded from a website without accompanying visual cartography. Turn left, turn right, turn left, except now we’re in a parking lot of Soviet-era high-rise apartments. Turn right, turn right, turn right, haven’t we just made a circle? Turn left, go straight, except it’s a divided highway and we can’t go straight. Etc. Then as we finally hone in on the reputed street that contains our hostel, the streets become one-way, and they switch which direction they are one-waying every block. Nobody speaks English except one policeman who has never heard of the hostel that is right in the middle of his beat. End of story: tired, frustrated, utterly exasperated, very very hungry, and nearly out of gas, we finally found our hostel which is really quite nice; definitely on the upper end of hostel scales as we know them to date. This is a welcome contrast to the two weeks I spent living in Prague in rather less than stellar accommodations. I’m happy to have left my tiny cement cell whose claim to regular maid service was greatly exaggerated. 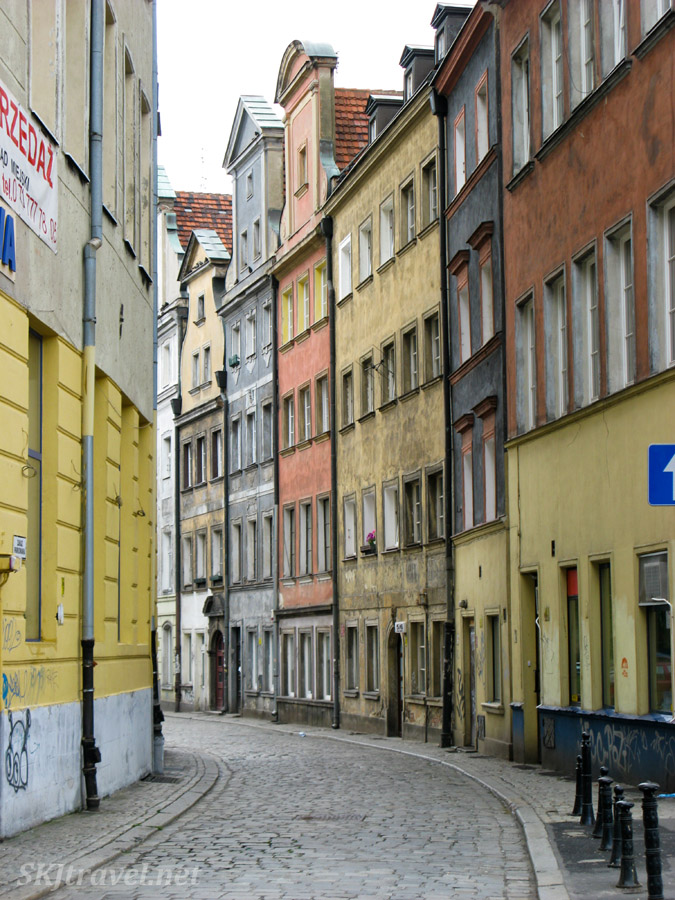 So I hooked up with Erik in Prague with no problem. We ate a couple meals together, but otherwise didn’t really spend much time with each other, as I was still busy concluding business with the people in my writing program. So he had some fun exploring time on his own. By a pretty large coincidence we did happen to randomly run into each other once in the middle of big rainstorm in which we’d both been caught out in the middle without umbrellas and were running for shelter. We met in the middle of a bridge and subsequently ran to the nearest tree to wait out the rain. It rains nearly every day, but usually only for 10 to 15 minutes or so. But the day we left Prague and drove to Poland, it rained hard the entire day and was pretty miserable.

We made one pit stop at the town of Kutna Hora outside of Prague to see the “bone church,” an ossuary of thousands of human bones from one of the many over-crowded cemeteries of antiquity, fashioned into patterns and interior decorating adornments. Creepy but cool. When you really look at it, it's pretty astounding -- first the monks separated the bones from individual bodies and organized them into collections of each type of bone, then visualized a pattern for a decoration and which bones would work well together, then carried out this meticulous work of putting everything together. They saw it as honoring the dead. 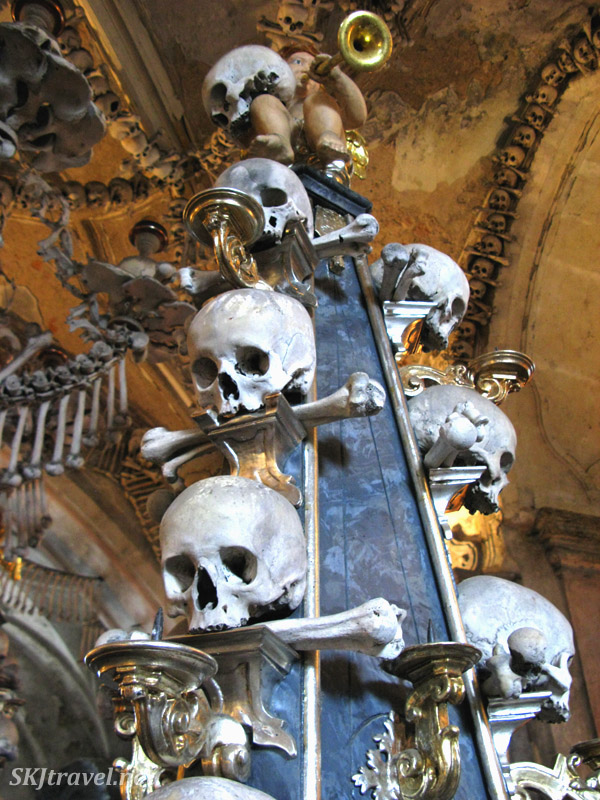 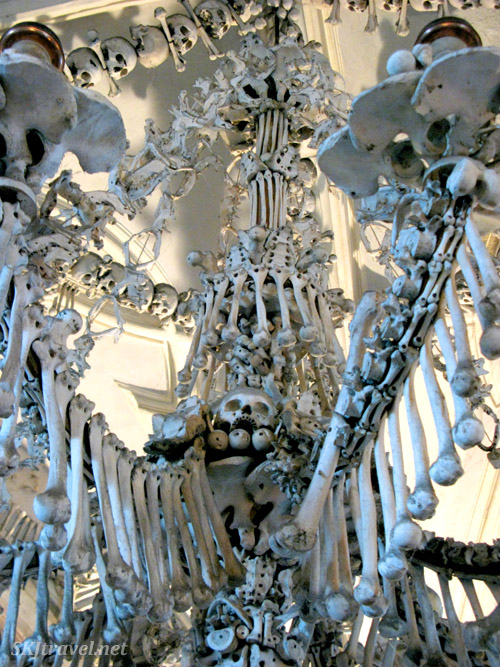 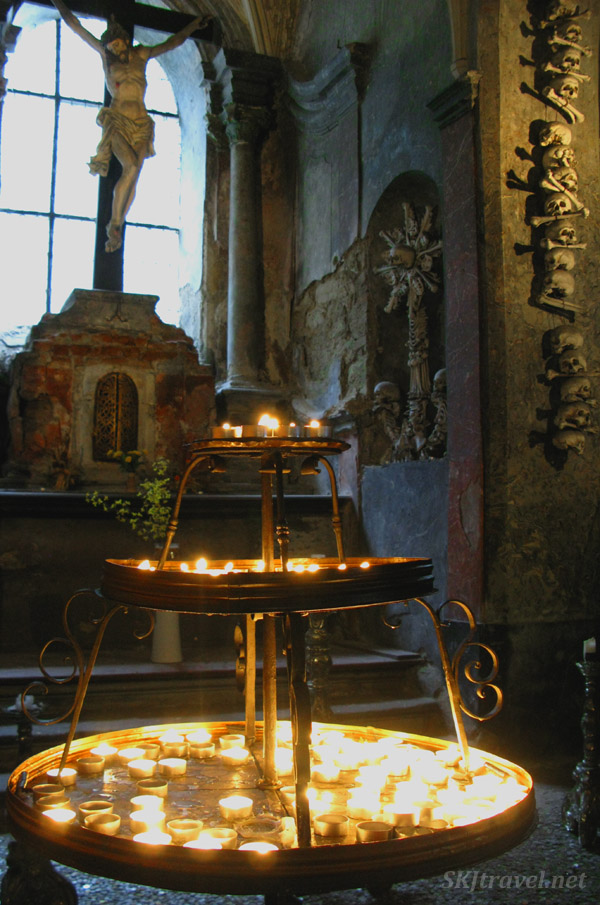 The last few days we’ve spent in Wroclaw have been lovely; a town I’d never heard of until perusing the guidebook. Last evening we stepped into an Irish Pub (“Irelandsky Pub”) for a relaxing beer to end our day. We each pointed to an item in the Polish beer list we hadn’t tried before (resisting the urge to order Irish beer we know to be yummy). I was subsequently presented with a glass of green liquid topped with a dollop of blue foam. It was horrible. Erik’s drink looked well enough like beer, but this is only the second beer in the entire 17+ years I’ve known Erik that he could not finish.  We felt kind of silly, but after awhile we had to get up and leave our glasses 2/3 full on the table and go try to erase the memory from our palates. Found out later we'd been drinking a radler -- part beer, part soda like a Sprite.

But our dinner elsewhere completely made up for it.  Nice atmosphere and super delicious food (me: duck with cherry and peach sauce and fried potato nodules; Erik: steak with chantrelle cream sauce and what he claims are the best vegetables he’s ever had (peppers et al). And then our waiter happened to have been an exchange student to Pennsylvania when in high school, so contrary to everyone else in the city, he spoke excellent English. After chatting with him a bit, he volunteered to show us around the basement of the restaurant—a labyrinth of rooms and passageways discovered underground by the owners of the building shortly after they bought it in the late 1980s. They had it all excavated and finished it into a series of dining rooms for special VIP guests and for patrons during the winter (people mostly sit outside in summer).

The main market square is delightful and almost oddly empty. A few people sprinkled here and there -- made it very enjoyable. 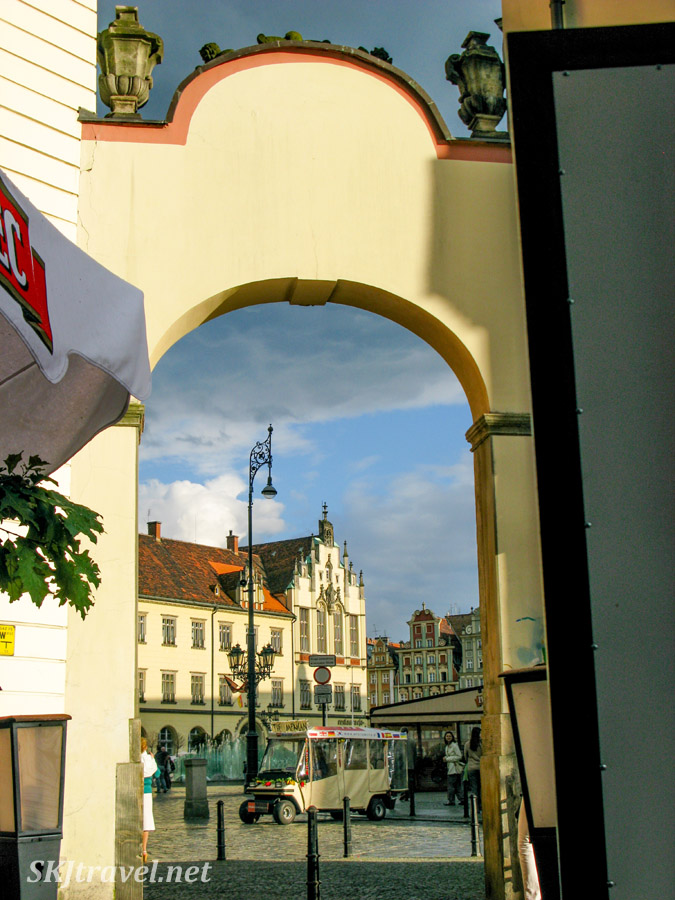 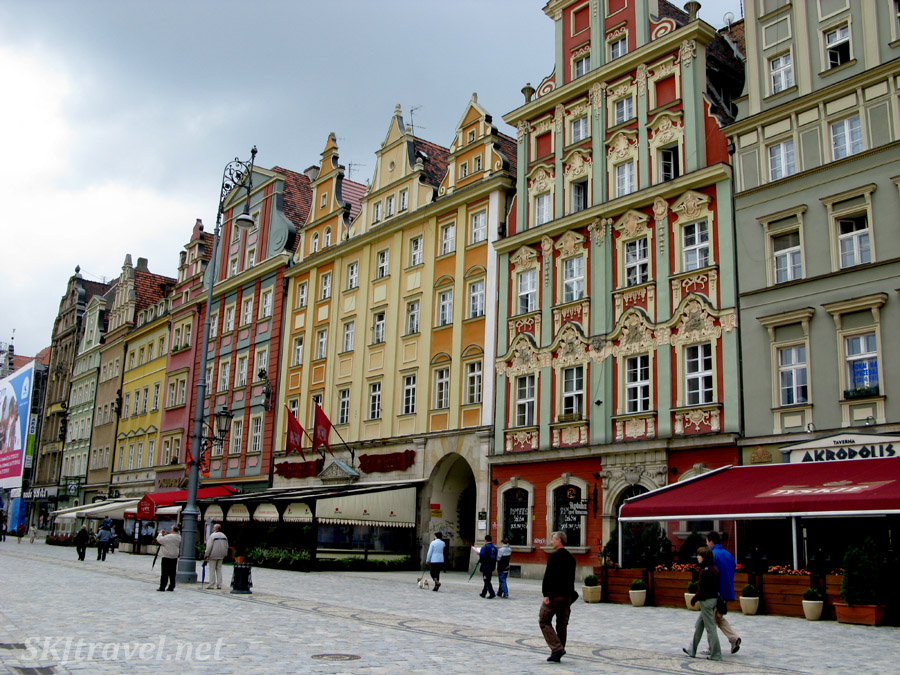 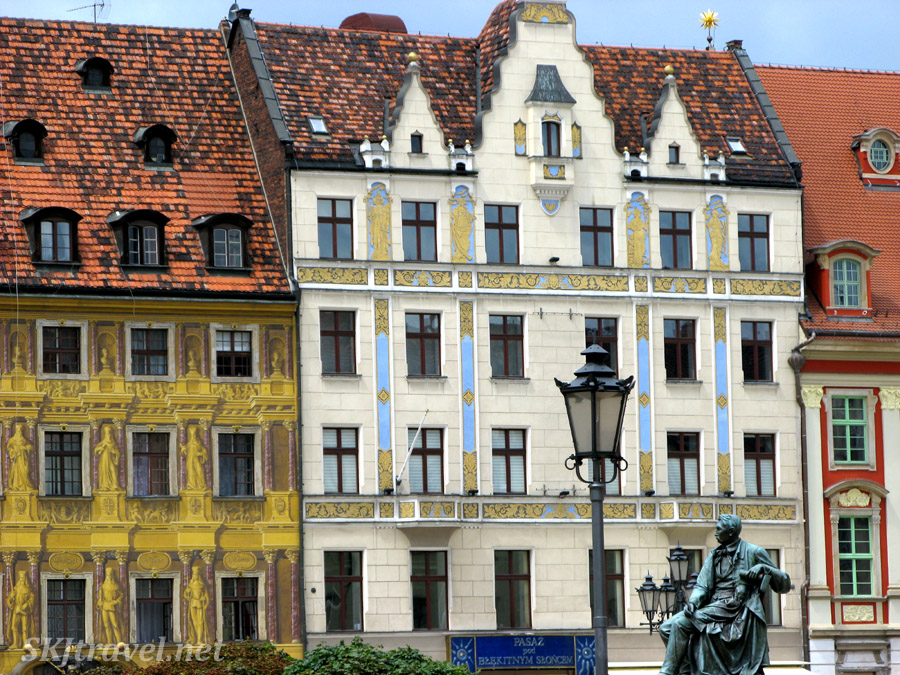 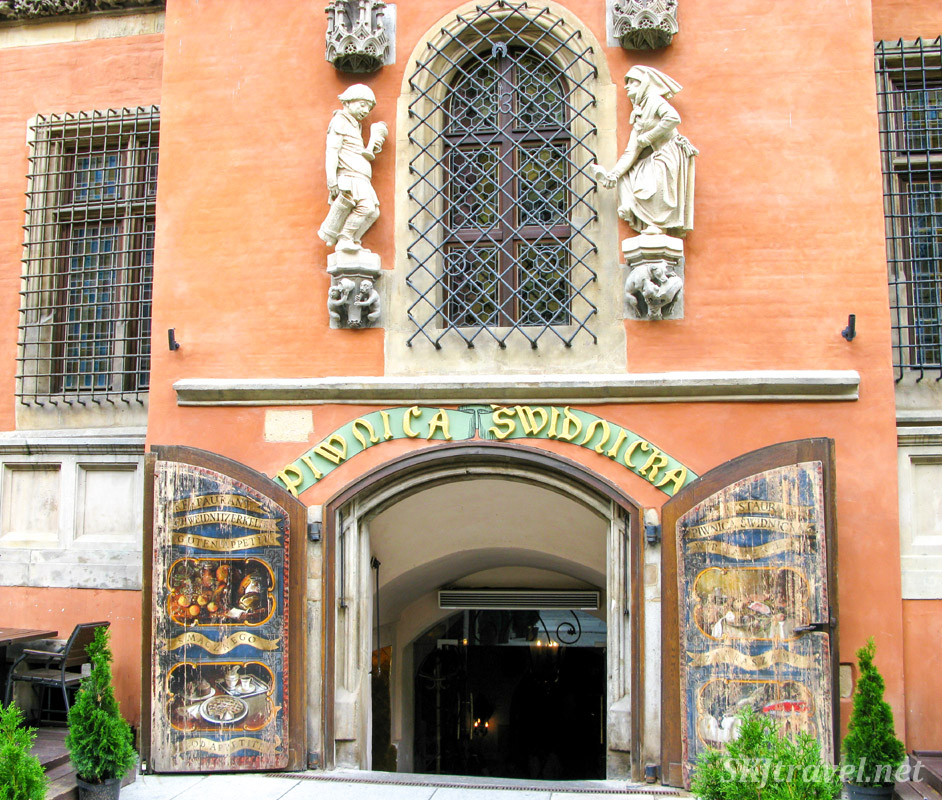 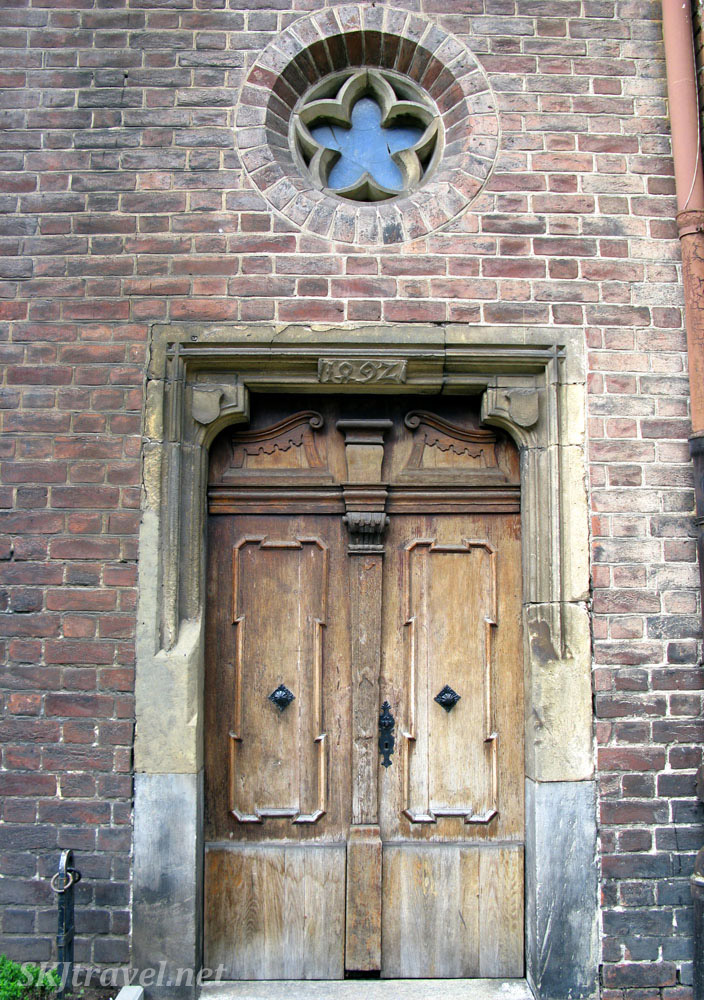 Street performers in Wroclaw are really high caliber. We spent about half an hour watching these two guys playing duets of classical music on their accordions (very complicated ones in which instead of piano-like keys on the one side, it looks like a typewriter).  They were really astounding. They were selling CDs, but that could never do them justice; they really should be selling DVDs so you can watch their fingers fly.

The town hall is beautiful both inside and out, with a pretty roof and clock on the outside and the signature Gothic architecture of high vaulted ceilings. 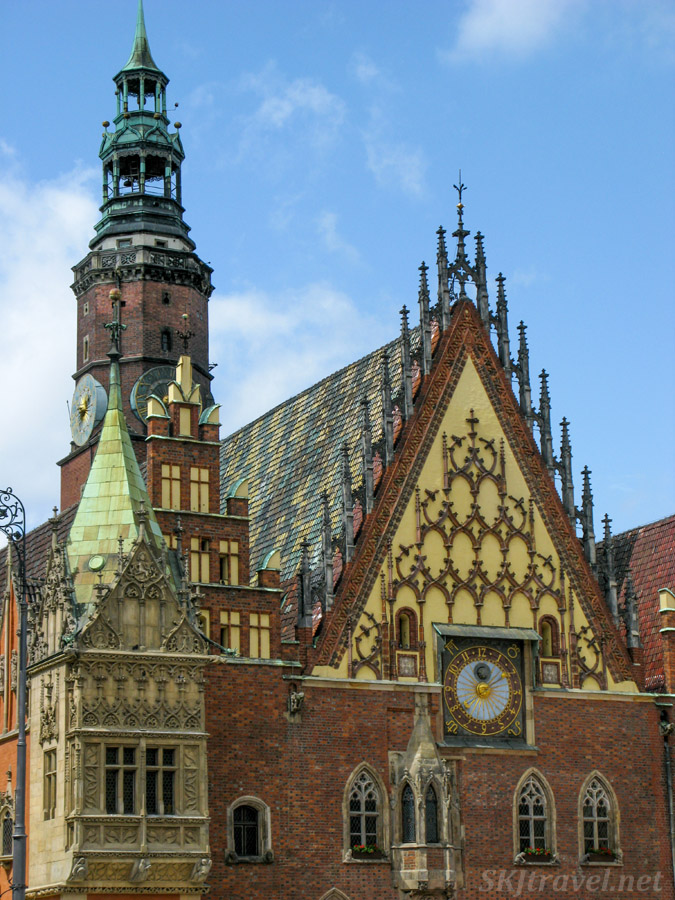 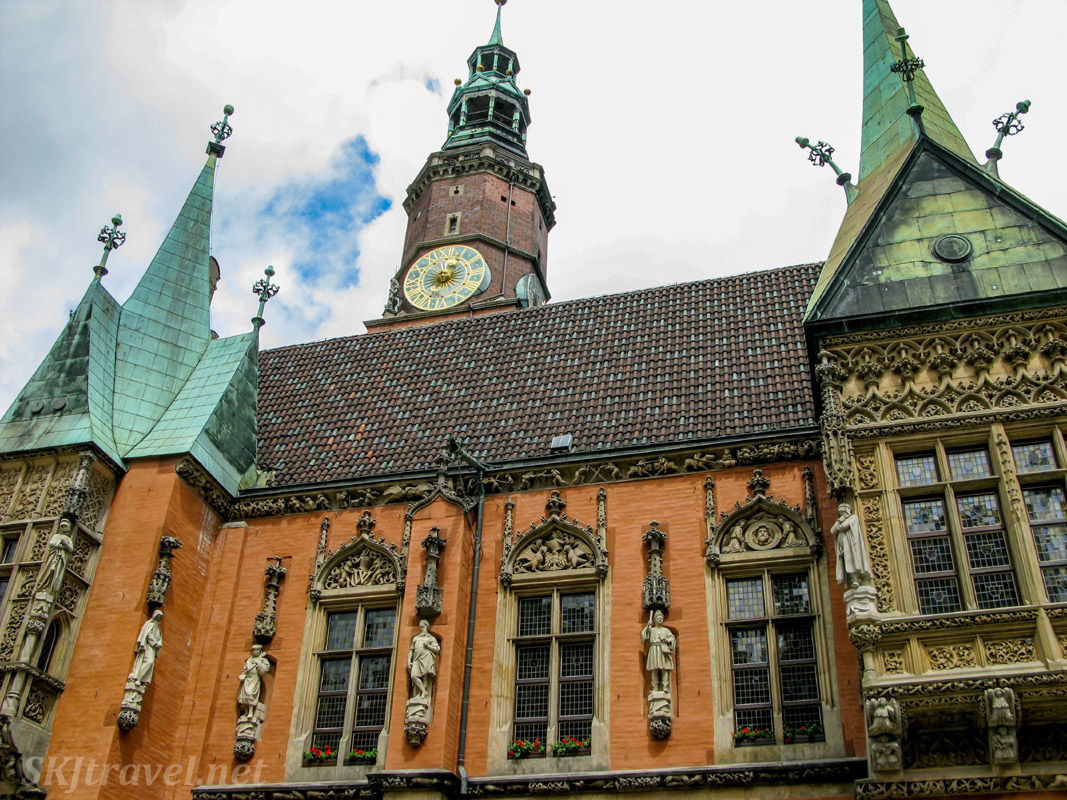 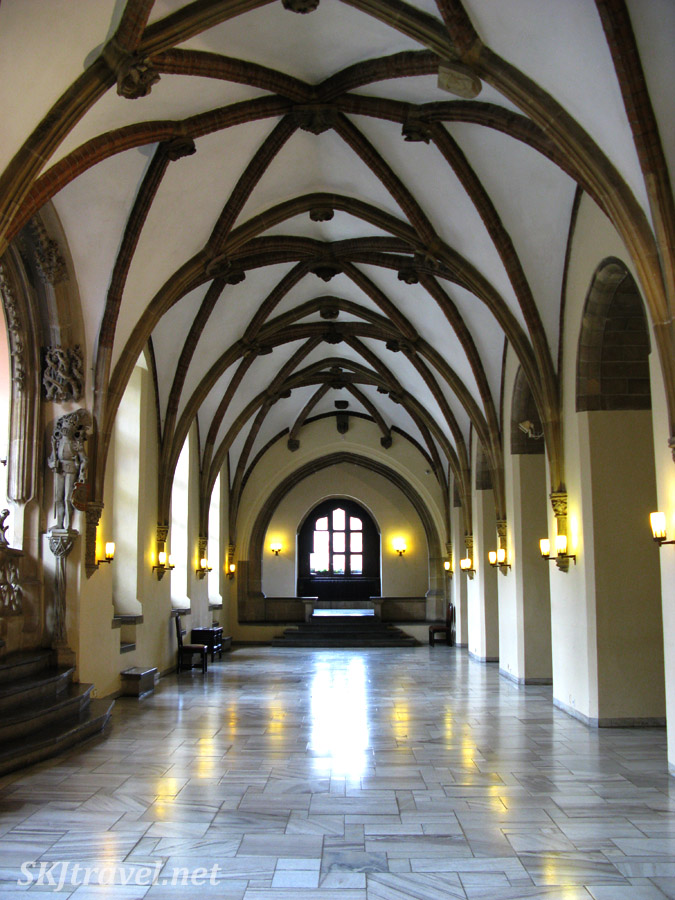 Wroclaw was pretty much leveled by the Germans in WWII.  There are photos everywhere documenting the devastation, and how the buildings were rebuilt. Below you can see in the towers, the red brick areas are the rebuilt sections. The city decided not to try to blend in the reconstruction, but let it stand as a monument to the war's destruction by rebuilding with obviously different materials. Wroclaw sits on the Oder River, and at one time the buildings you see below were on an island, Ostow Tumski, which is more like a peninsula now. That is also the oldest past of the city, established sometime in the 10th century. Notice in the twin towers of the cathedral on the right, you can see two different materials -- stone and brick. The brick is the new material used to rebuild after WWII. 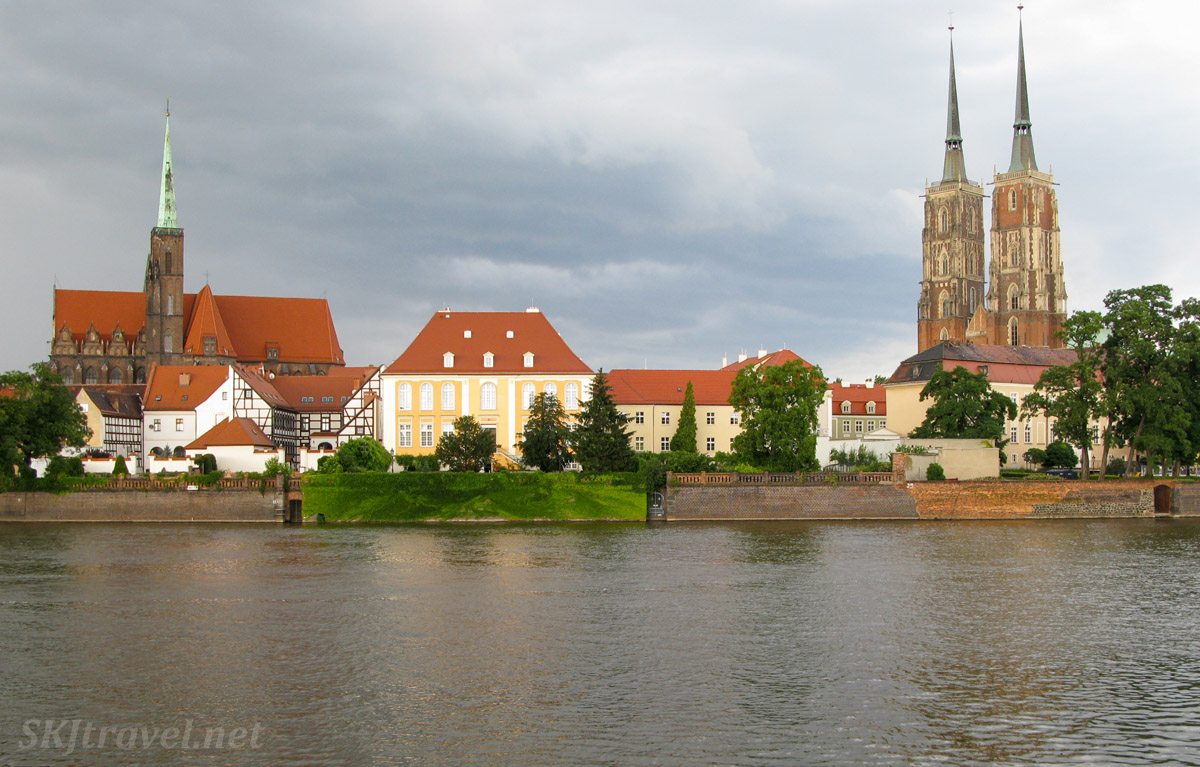 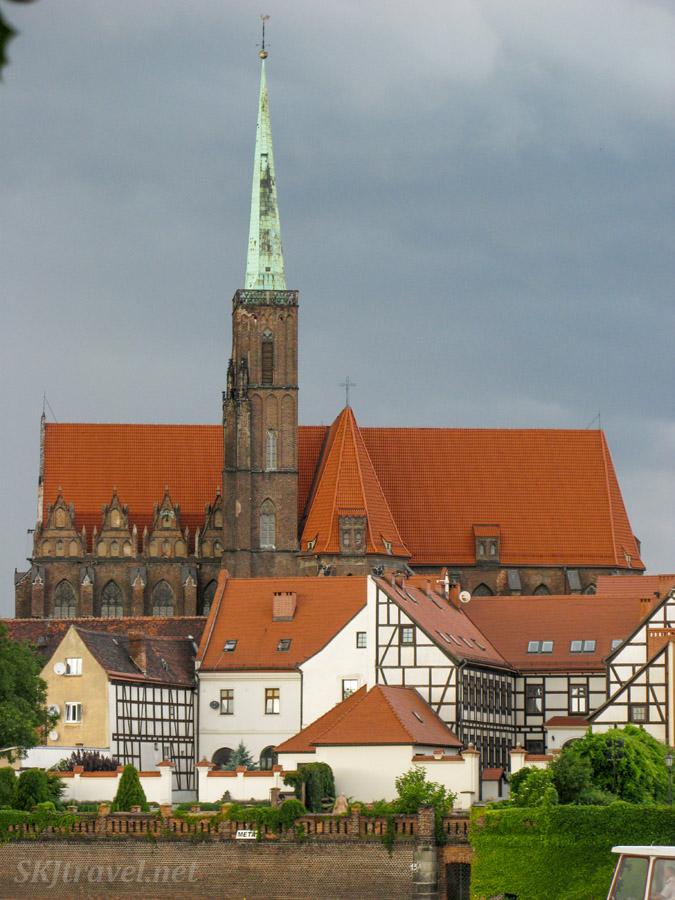 One of the many churches we stepped into here had a small side chapel (like all churches here). We went inside it expecting to see the usual gilded religious iconography and dimly lit solemn atmosphere. Instead, we walked into a room playing children’s music through speakers and a large display of moving toys. It’s like a series of glockenspiels, or like being in It’s A Small World in Disneyland—a very, very, very low-budget Small World with used toys (presumably donated). It could hardly be more at odds with the otherwise high-vaulted austerity of the rest of the church. Apparently it’s a chapel dedicated to blind and deaf children.  Very high on the scale of randomness. 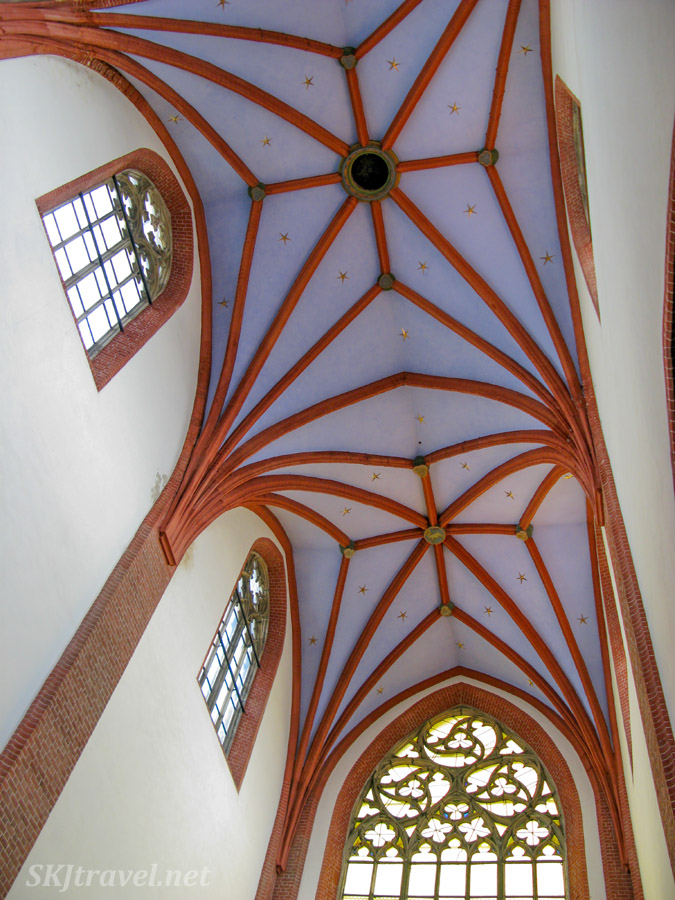 Wroclaw is one of the prettiest cities, I think. Wroclaw University is a really cool ancient university where Galileo studied as well as other luminary figures in history. The lecture hall, below, was so ornate, I thought that if I were a student there, I would have a hard time concentrating on the lecture, getting instead lost in painting and decor. 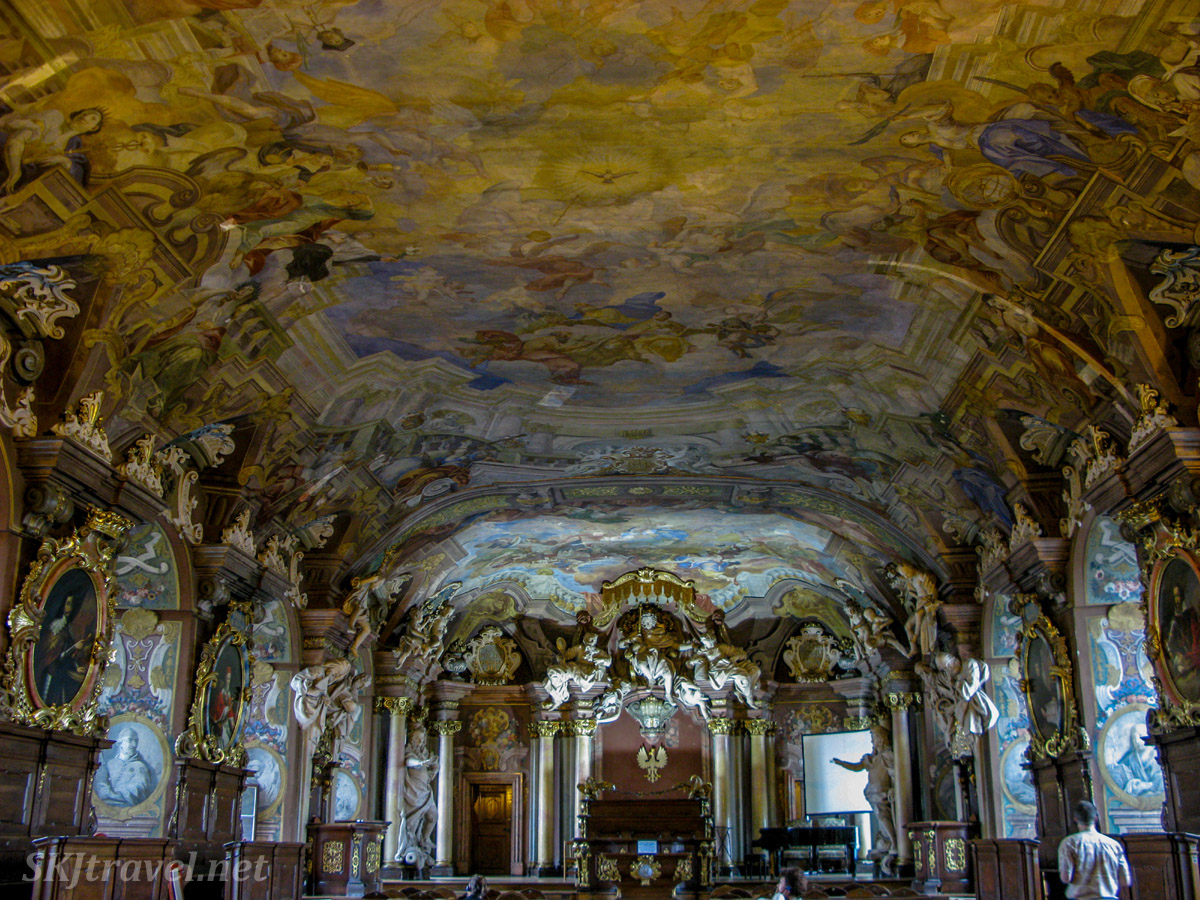 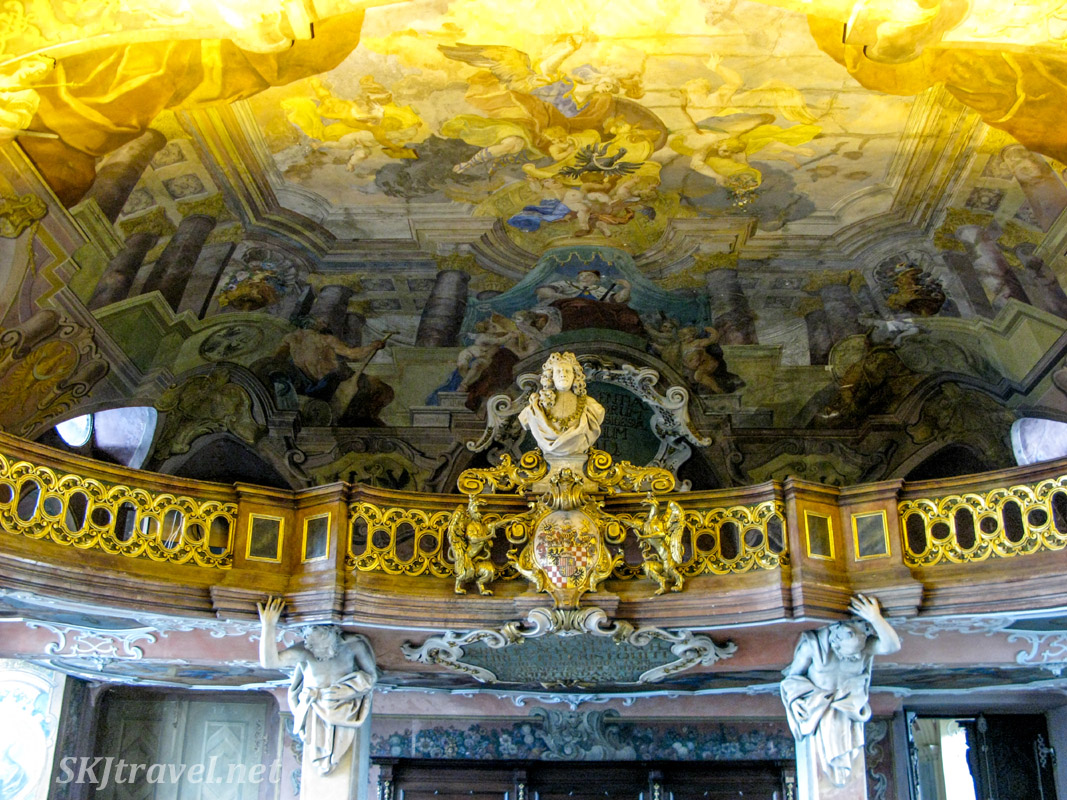 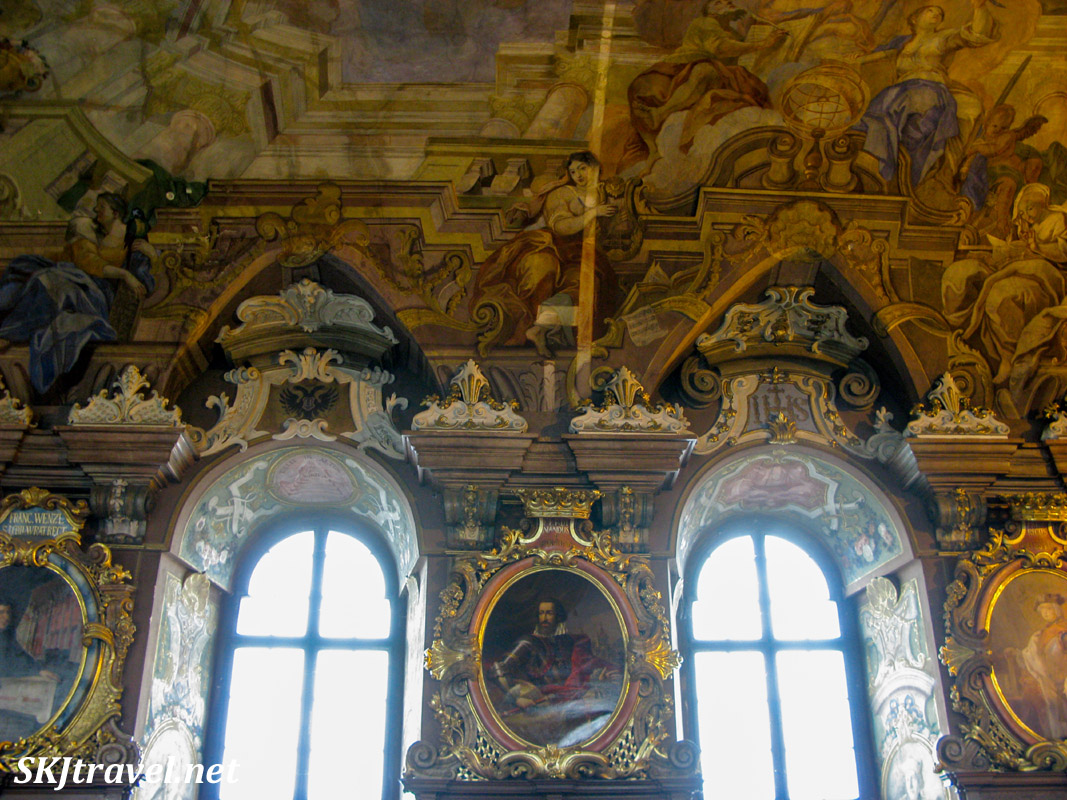 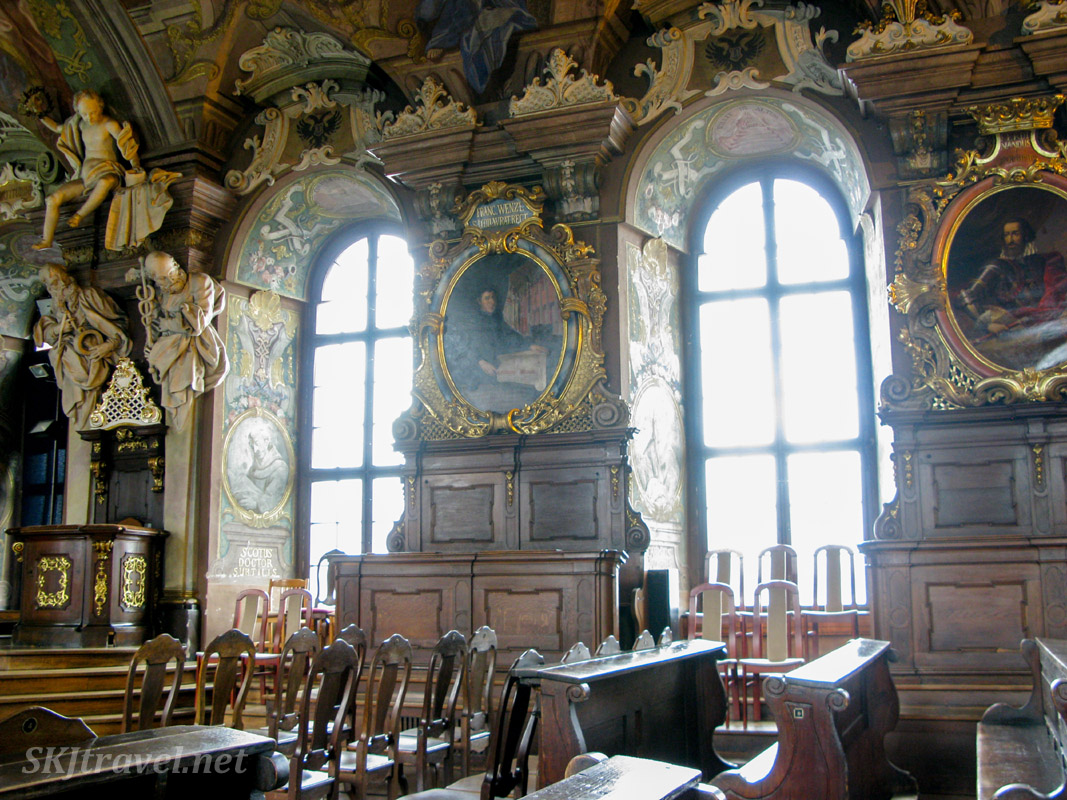 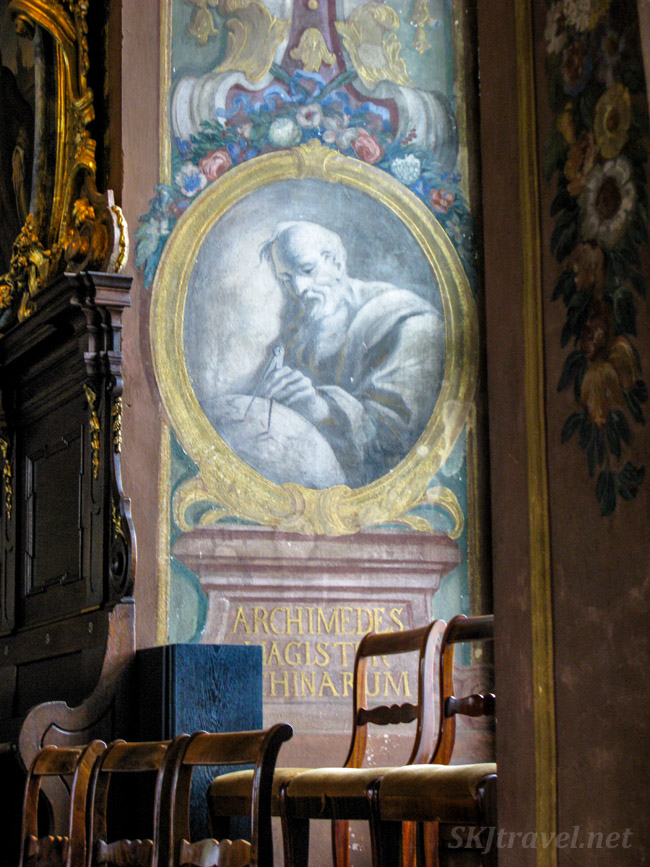 At the top of the observation tower, called the mathematical tower, at the university, you get some lovely rooftop views of the city, and there's a nice collection of astronomy devices and gadgets. Here's Erik imitating an explorer with his fancy telescope thingymadoo. 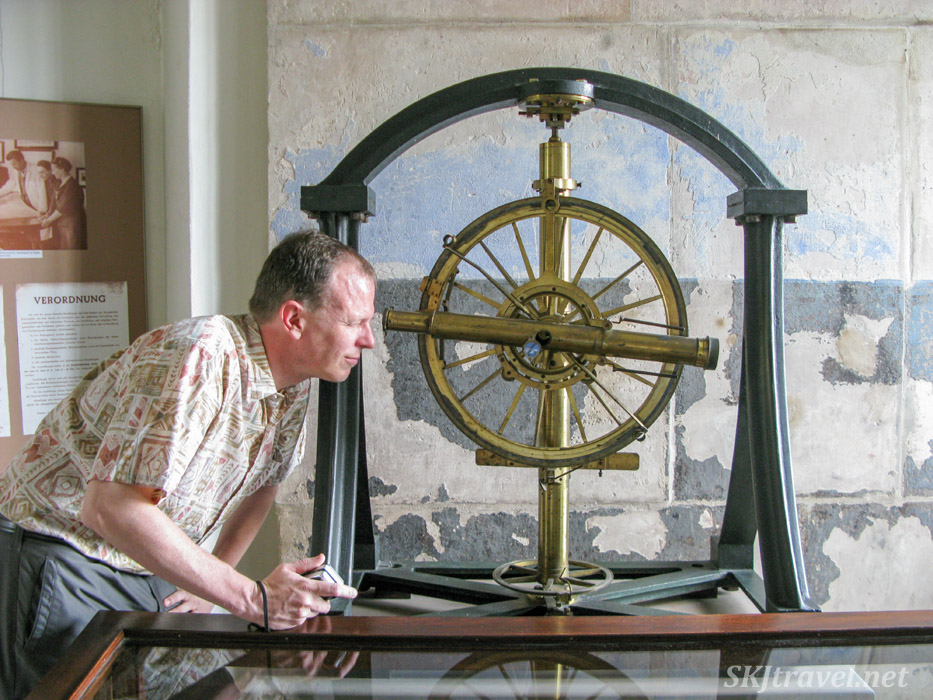 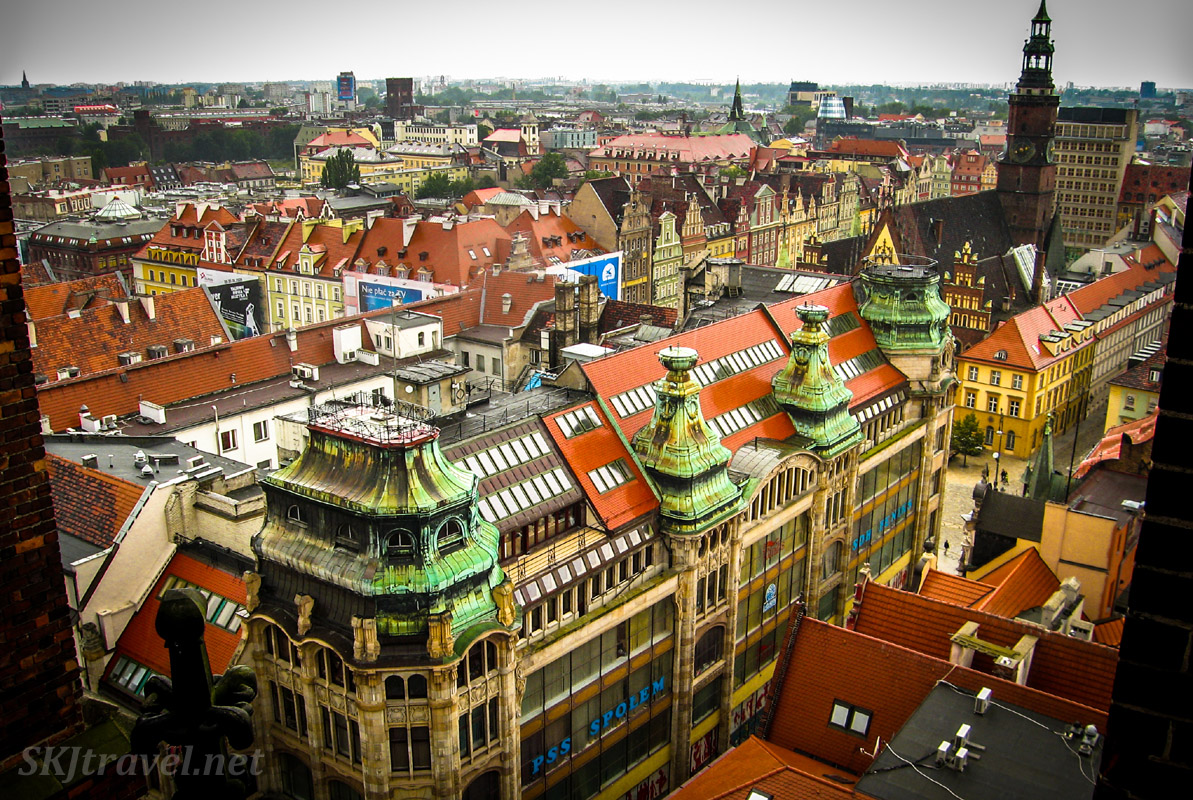 The city seems to have a theme of gnomes… so there are bronze gnomes of various sizes scattered everywhere, and also people dressed as gnomes pretending to be statues. It’s a fun game to look around and see where they are randomly lurking about on the sidewalks and courtyards. 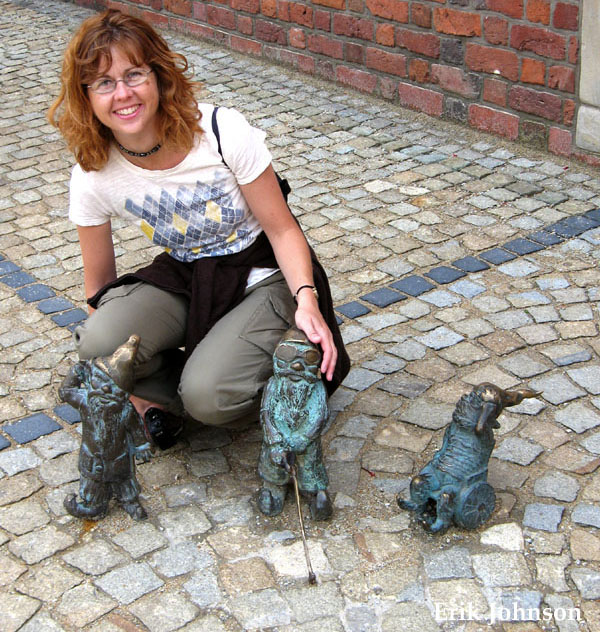 We spent some time on afternoon walking through the botanical gardens ... an activity I might not normally engage in while traveling, feeling I should just see the natural flora as I travel. But the guidebook really recommended it, and it did turn out to be lovely. 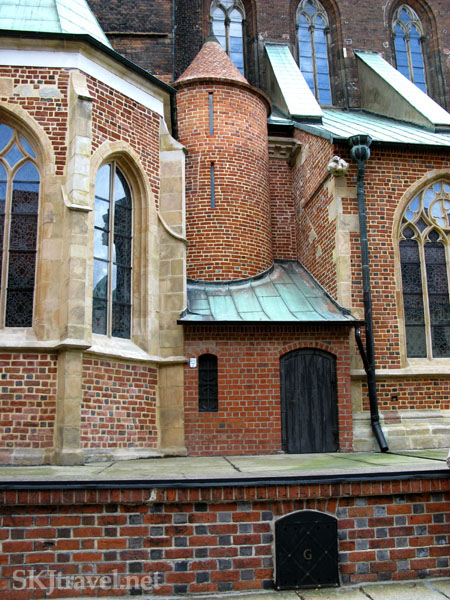 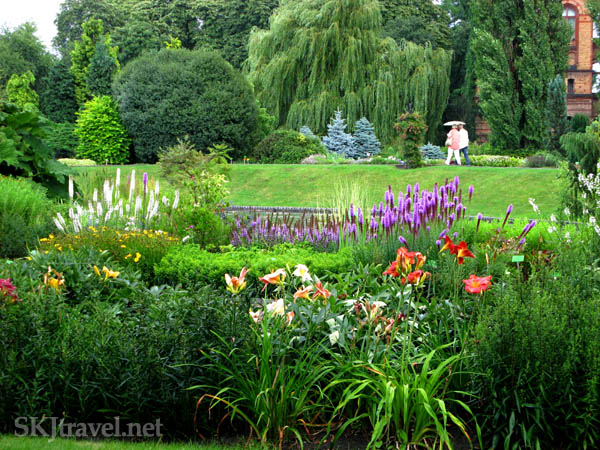 And so after a delightful few days in Wroclaw, we struck out toward Krakow along a route known as the Eagle's Nest. It is strewn with castle ruins, and we did stop into several. The surrounding landscape was lush and rife with wildflowers, and there were virtually no other people at the castles, we had them to ourselves. Makes for the perfect sort of day! 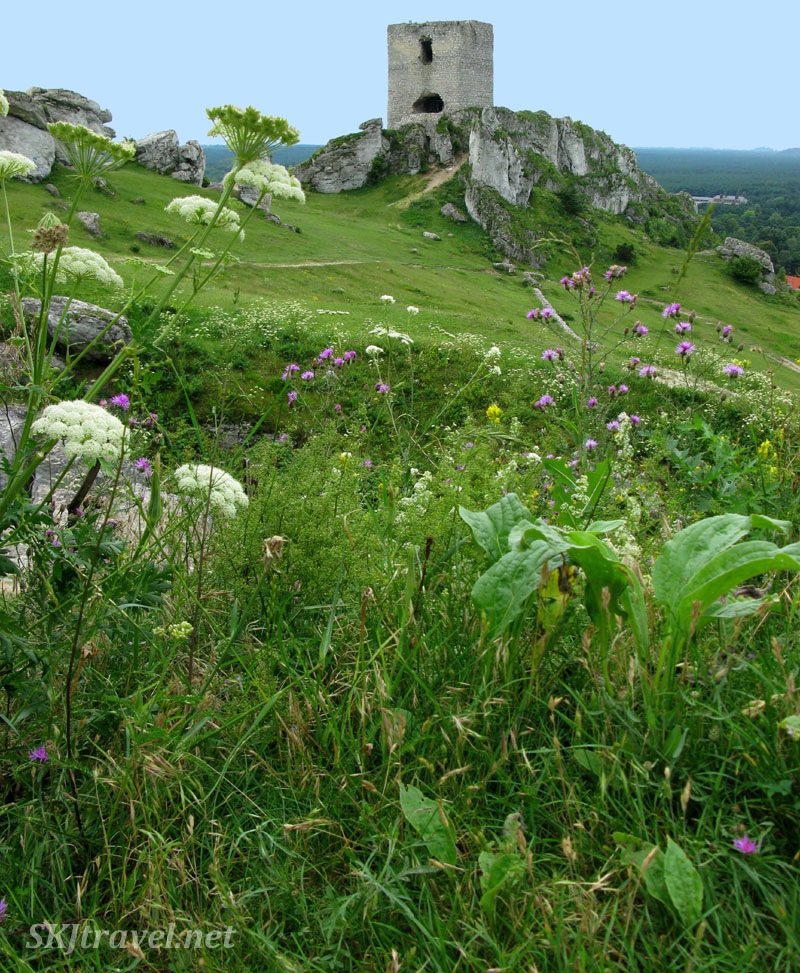 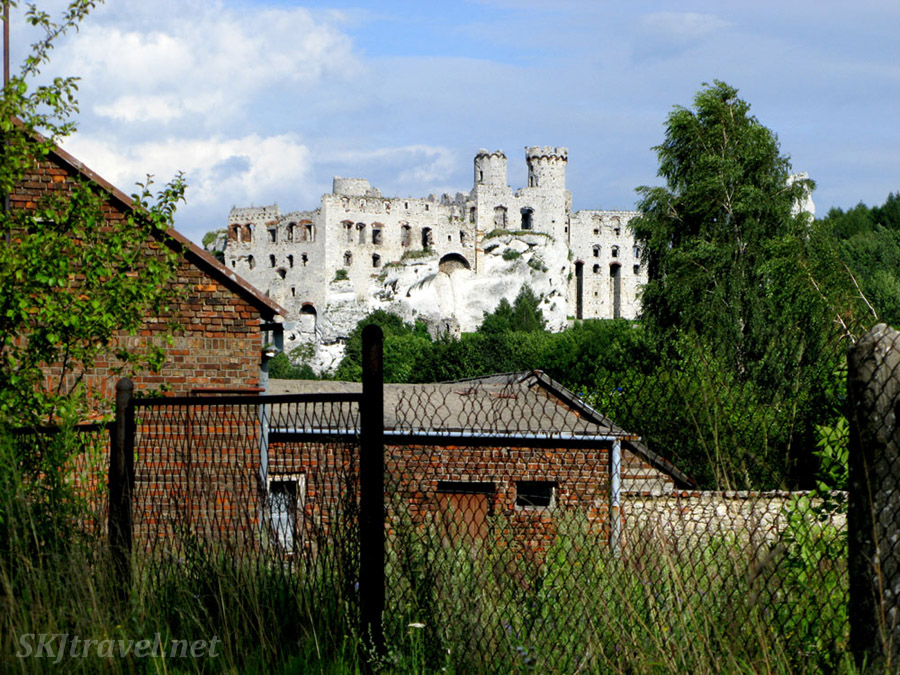 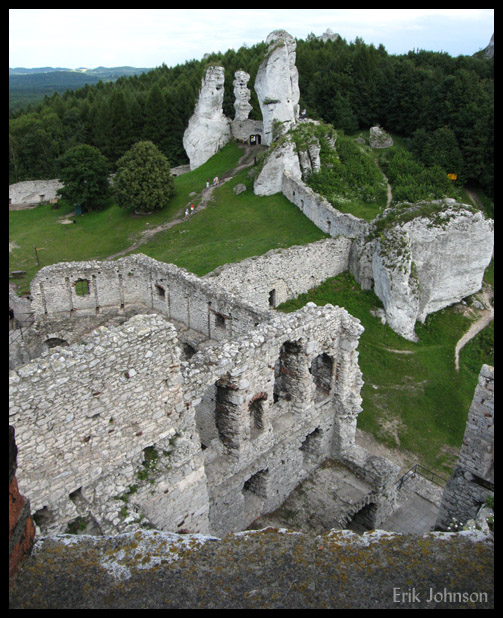 And here is your completely random photo of the day. A case of glass eyeballs which was on display at the Wroclaw University museum. 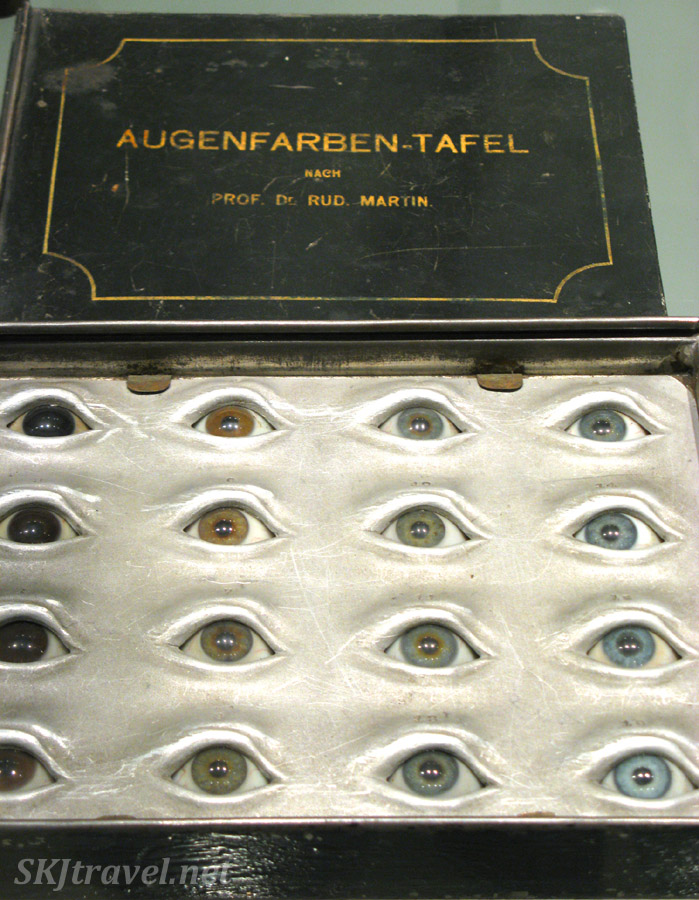