Feeding time at the Keepers of the Wild rescue sanctuary is definitely something to experience. I got a taste of this experience at the UWEC, giving Biza an appetizer, but it was very intense watching the tigers and lions and leopards at Keepers anxiously await their meat and then tear into it with deafening snarls and roars. It was intimidating being so close to them during this time, particularly when I was given permission to approach the caging closer than the tourists are allowed to, for photo opps for my website. The safety protocols at the sanctuary are very reassuring. Those folks have everything under control and then some. Even when I was allowed to come closer, they defined very specific lines in the sand which I mustn’t cross, not just in terms of how close to the fence, but how far along it in any direction. Their system of locking and checking locks is impeccable. As intimidated as I was by the tigers in their most primal and vicious state – eating – I had full confidence in my safety. Though the tigers were once handled by humans, here at the sanctuary, they have a policy of hands-off except in health necessities (such as doctoring Sampson’s nose). Hence, many of the animals regain somewhat of a wilder side.

About 300 pounds of meat per day is consumed at the sanctuary. A rather astounding figure. The tigers get 10 pounds per day. Then you have leopards, lynx, bobcat, et al. It costs the sanctuary about $60,000 a month just to feed the animals. The carnivores get grade-A top-of-the-line beef, the others get fresh produce and sometimes baby food.

Here the meat trailer is just about to head out for feeding time. Below that, lining up bowls for the monkeys and other omnivores to fill with fruits and veges, plus a plate of grade-A rat for the reptiles. The omnivore diet consists of fruits, vegetables, protein, and a starch. One day I made a concoction of diced hot dog, cream of rice and baby food. Mmmmm. 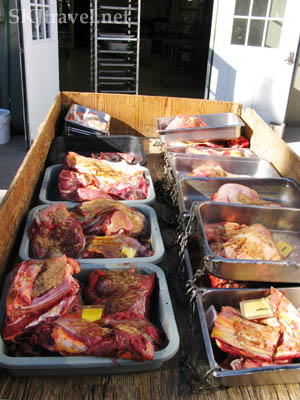 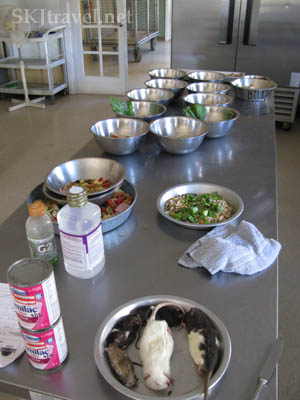 I loved getting to the enclosures just ahead of the meat trailer to watch the tigers in their anticipation, walking around impatiently braying and barking. I don’t know exactly how to transcribe their sounds, but it’s not at all like a lion’s roar. For some of the animals, the meat is thrown over the fence (good skill required from the caretakers). Click HERE for a short video of a tiger jumping up to catch his dinner thrown over the fence. Tried to capture jumping in a still photo, but was difficult. 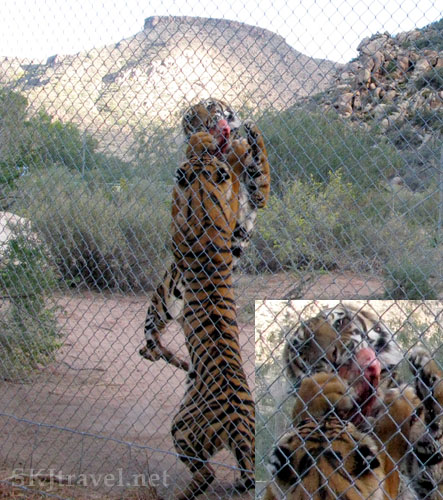 For others, the meat is put in a metal tray and slid quickly through a slot then chained to the fence so the tray can be retrieved. Click HERE for a video in which I was trying to capture the sound of being near the tigers at meal time. I think it doesn’t do it justice, but it’ll give you a taste. Click HERE for video footage of the jaguar getting very possessive of her meal. As soon as I got some video, I backed off to let her feel more at ease. 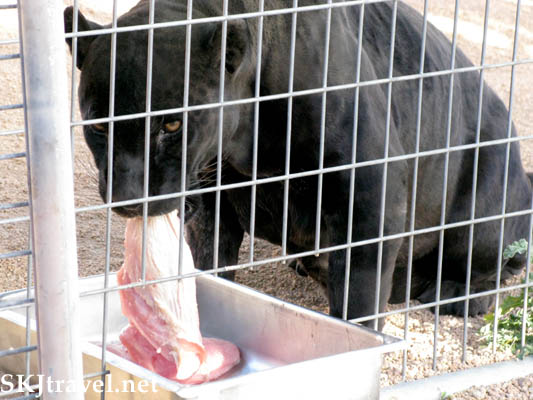 Here’s Sultan the lion trotting along the fence, waiting for dinner, hoping I was the bearer, but I was only the photographer, preceding the meat trailer. Once a week the large carnivores get a whole turkey or chicken to mix up their diet a bit. You can get a sense of scale of a lion’s mouth when you see he has an entire Thanksgiving-sized turkey in his mouth. 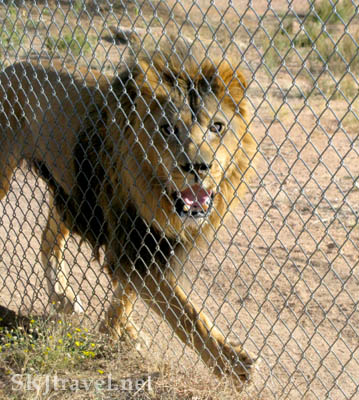 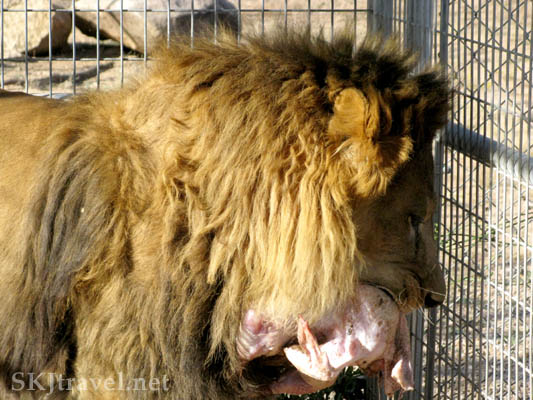 My favorite to watch was Sebastian. A tiger’s tongue is so barbed, if he started licking you, after about three licks, your skin would start to come off. You can actually hear the abrasion of the tongue on the meat. The keepers say that their tongues are meant to peel skin off “like rolling down a pair of pantyhose.” Click HERE for video of Sebastian munching dinner; you can admire his canines and listen to the sound of him crunching the bones. Imagine if they were yours!  Intimidating as it is to witness, I honestly think it's beautiful watching these large cats tear into their meat and snarl and growl and scare the hell out of anyone near by. Just to witness such raw animal power. 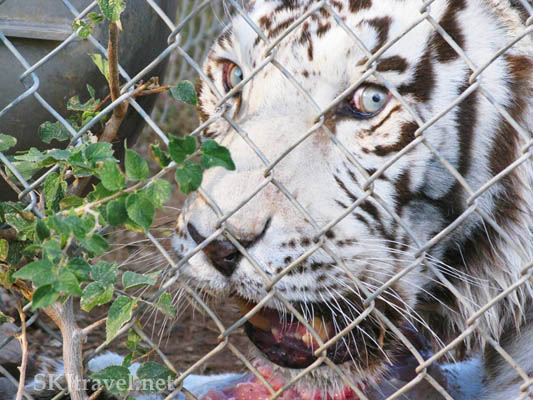 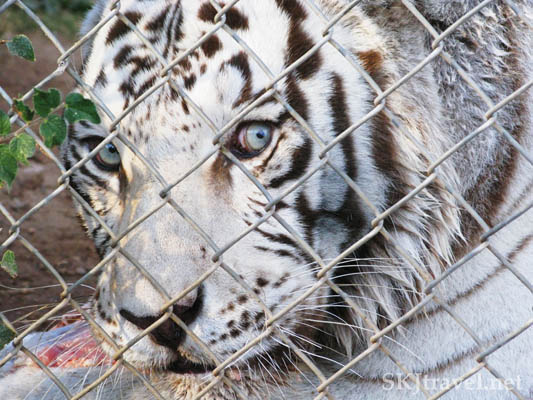 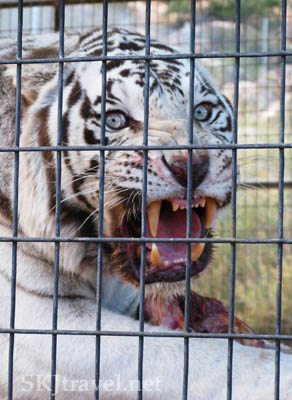 Even Bob the 70-pound tortoise goes looking for food, trying to bore his way into the refrigerator. Ha. Believe it or not I had trouble getting a focused shot of Bob because he moved too quickly! He was currently stationed inside the office building and had free range of the kitchen/utility area. I found it kind of hilarious to walk in and see the tortoise motoring around, trying to get into the refrigerator and cupboards, bumping his head into them. Every time I knelt down in front of his trajectory to try to focus on him coming toward me, he raced toward me and I couldn’t focus. I was fascinated by such a prehistoric-looking face. 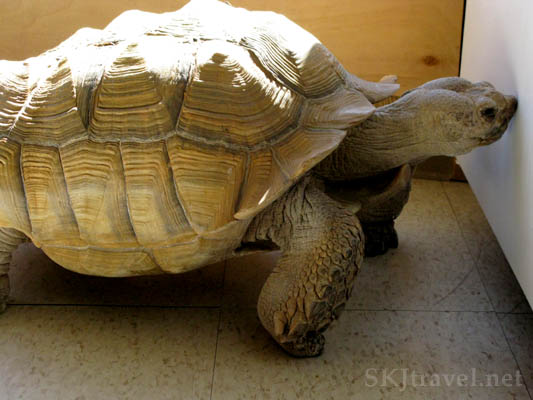 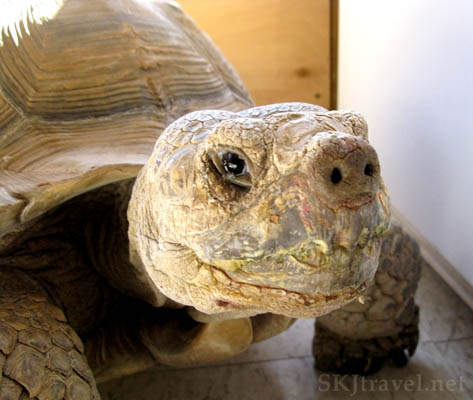 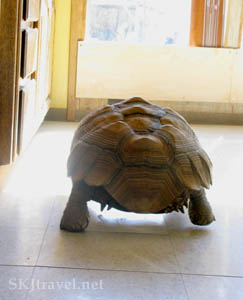 Here’s Carlos sucking on a peanut. On this morning, he didn’t want to give up his cozy nighttime monkey blanket (these are washed and redistributed each day). He wore it over his head all morning. Recall he is the poor soul whose previous owners had all his teeth pulled so he couldn’t bite them. 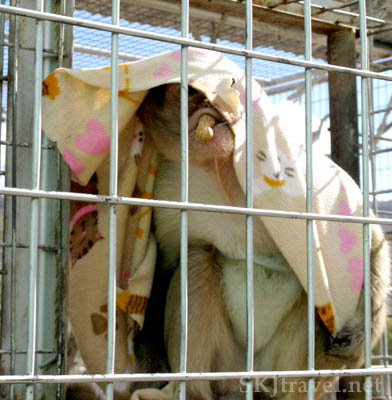 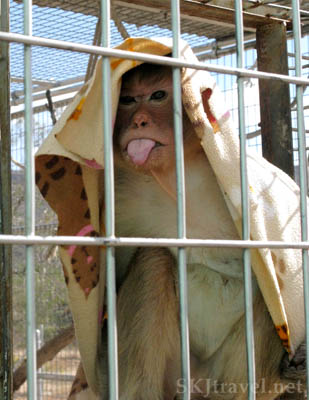 On this day, Buster spent a good 30 minutes picking through the gravel in his enclosure. This really cracked me up. He was so cute, but I have no idea what he was looking for. Bugs, presumably. Or pretty rocks, perhaps. Maybe he has a secret collection. Ha. 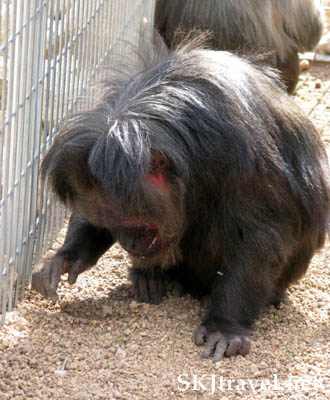 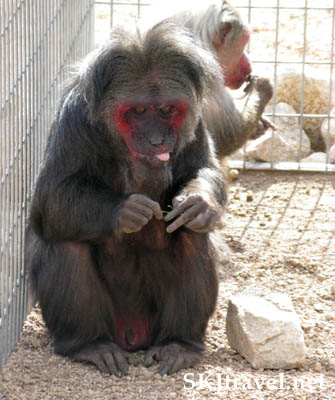 And what about Shara's feeding time at the sanctuary? This time encompassed the lunch hour. She ate a variety of foods, ranging from snacks Doreen and I snagged from hotel breakfasts and her parents' care packages (they live nearby); to lunches graciously provided to us by Jonathon and Tina, founders of the sanctuary, in their home; to pizza and beer one day down the road (which is Route 66), at a timeless bar ... we walked in and the first thing a guy stationed at the door says to me is, "Do you play pool?"  I didn't understand at first, it was such a random question, until I noticed the pool stick he was holding. We were served by a bartender with 4 sparkling gold teeth, which appeared to be his only teeth. Doreen and I were accompanied on this outing by Mat Dry, who drove up from Phoenix to meet us. If you'll be driving Route 66 in your travels, you can combine pool, pizza and 300 pounds of big cat meat all in one afternoon. :)