Big Cats in the Desert - Rescued Tigers and Lions


I’ve arrived at Keepers of the Wild animal sanctuary, where I’ll be stationed for the next few days to observe the animals, help with a few chores, and tell you fine folks about the critters who have been rescued here. As I mentioned earlier, the majority of these animals have made their way here from human environments, having been in the entertainment industry – show animals, roadside zoos, circuses, etc. – or private exotic pets. Many spent their lives in heartbreaking conditions, and have no hope of ever living (that is to say, surviving) in the wild. Now they have space to roam inside large enclosures here in the beautiful Arizona desert country. With rocks and trees, shade and water tubs, night boxes, and real earth beneath their paws. Some of these big cats have lived their entire lives on a cement floor in spaces barely larger than their bodies. Just about makes you cry to envision these magnificent animals spending their lives in such a cell.

Meet Sampson. His home was just as described above. When he arrived at Keepers, he had no muscle tone from being locked in such a small cage; he could barely manage to walk the length of his enclosure here. I was shown the size of his former home, and was appalled. Because he was an entertainment cat, he is habituated to and in fact appreciative of human attention. I was allowed the incredibly special privilege of entering the enclosure with him while Jonathon (the sanctuary founder along with his wife, Tina) treated his nose which was cracked and bleeding. 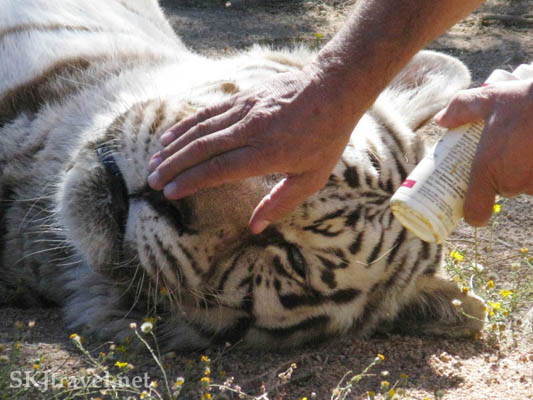 I could see sores on his white and black-striped body, and learned that’s the condition called “cage rub,” acquired from a life spent sandwiched between metal and cement. After three months at the sanctuary now, his muscle tone has improved, his sores are healing, though he still needs treatment. And three of his former entertainment tiger mates will soon be joining him in new enclosures. 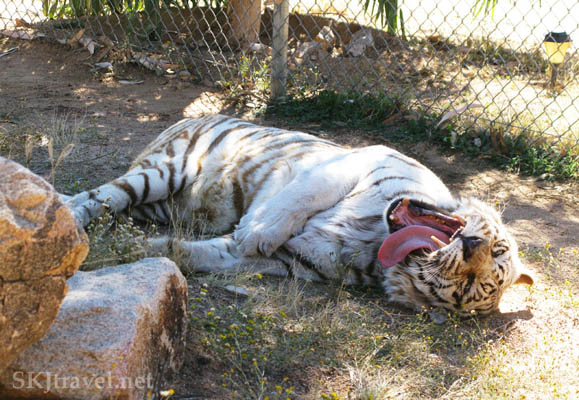 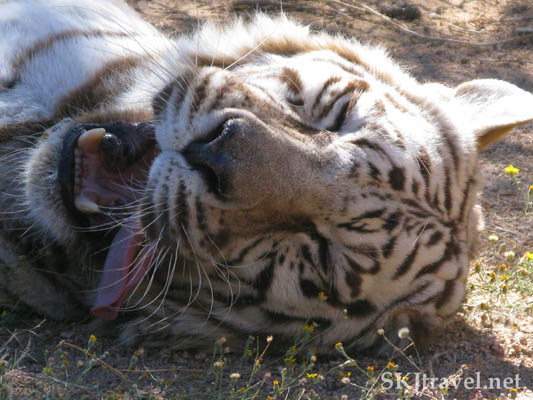 So what is it like to be in the presence of a white tiger? It’s one of those things, kind of like the gorillas I was with at Bwindi, that at the time I was only admiring the animal, the size of his paws and canines, the color of his eyes, the pattern of his markings. He yawned and rolled on his back, letting the sunlight warm his belly. His back leg pedaled at the air as if scratching an imaginary part of his body. He scrunched his eyes shut, accentuating the patterns on his face. Then finally, I thought, "Wow, this is an enormous animal." So huge, and I’m so small. Small and vulnerable, and that’s the way it should be. As with the gorillas in Bwindi, I wasn’t frightened, but I was awed. I started petting him lightly, mostly just from timidity. But then I was told, "Make sure you rub hard, otherwise he'll think you're a fly and swat at you with his paw!" 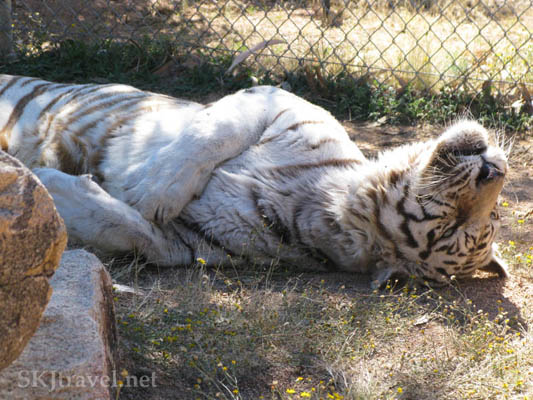 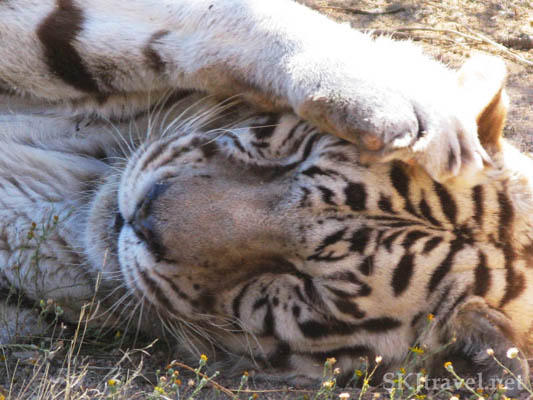 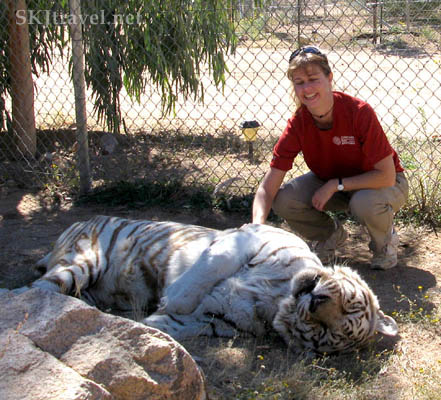 Bambam is an elderly mountain lion who spent his life with humans. This was the other special privilege I was allowed (because Doreen and I are writing about the sanctuary), to pet Bambam. He was gentle as a housecat because of a lifetime with human contact. It’s a conundrum … he shouldn’t be so tame, but the fact is, he is and now is very old and appreciates the human contact he grew up with. In his new enclosure full of rocks where he can hide out in the shade and perch on top of for good views, he welcomes Jonathon, and on this particular day me and Doreen, into his new home. We petted him, and he purred and purred. Mountain lions are the only big cats who purr. It was a very special experience. 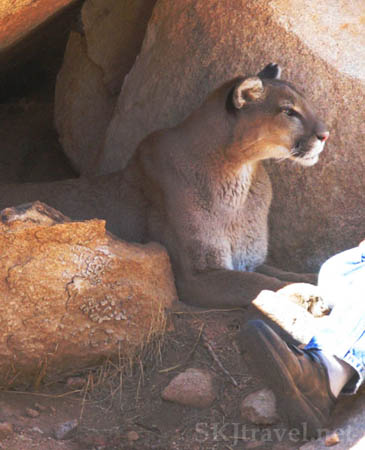 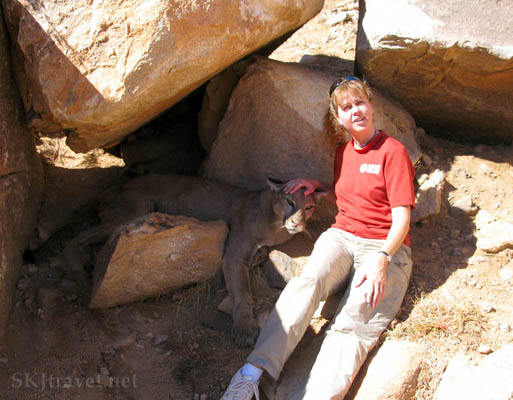 Baby, on the other hand, retains her beautiful wild nature. She is a 3-legged mountain lion. Her front leg had to be amputated. If you look, notice her left leg (on the right as you view the photo) is missing. At first it seems she has a leg tucked beneath her, but it’s only the fur of her chest. Mountain lions have the most piercing eyes. Here's a perfect example in Baby. 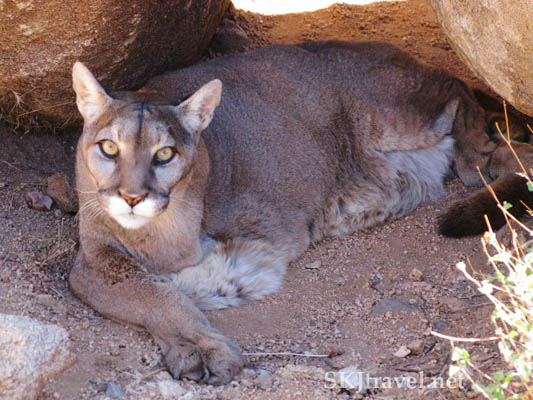 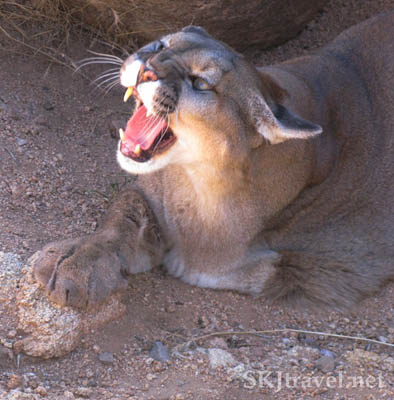 Perhaps the most endearing couple are Anthony and Riley. Anthony the lion and Riley the coyote, who are best pals. They each arrived at the sanctuary as cubs, and were put in the same enclosure for company. And now they are such pals, that they won’t eat without each other, and when Anthony has to be taken away for a series of necessary surgeries, Keepers must also put Riley in a transport crate to accompany Anthony on the journey, or they experience intense separation anxiety. They play together, sleep together, and Riley sometimes even takes food right out of Anthony’s mouth. 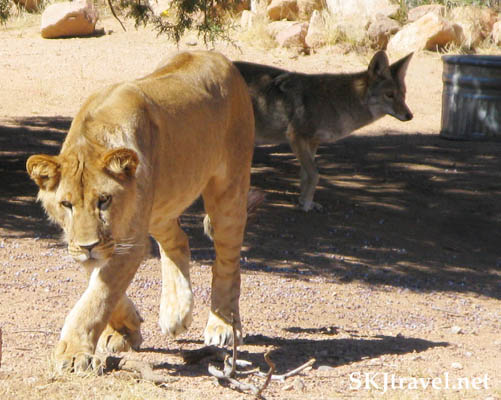 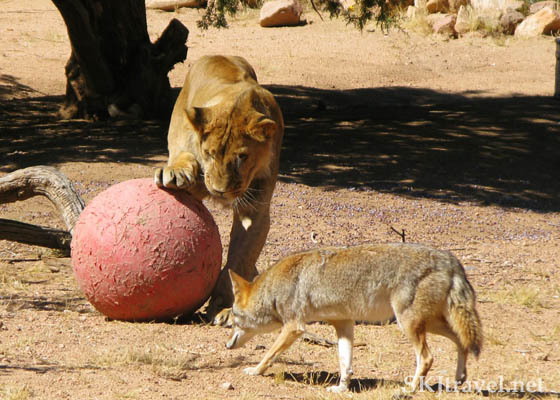 Anthony arrived as a cub. He would not have survived either in the wild or with his former owner who wasn’t willing to pay for the series of surgeries. Anthony had a birth defect where the insides of his back end were fused together, so that he peed and pooped from the same place, which causes constant infection. He has now been sorted out and is growing up, just beginning to grow his mane. He spends a lot of time in stalking mode, very slowly and intently moving toward his selected prey, in this instance the ball. Riley, meanwhile, prances around light on her feet, investigating whatever Anthony has focused on. These two pals were featured in a segment on the PBS Nature show, "Animal Odd Couple." You can watch the full episode online on Nature's website. 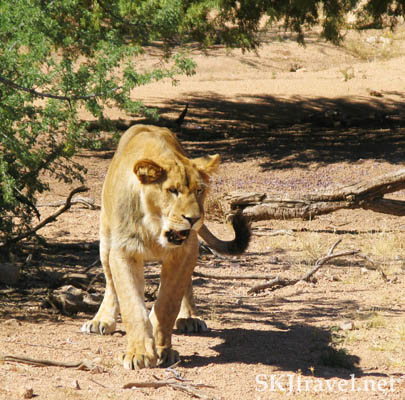 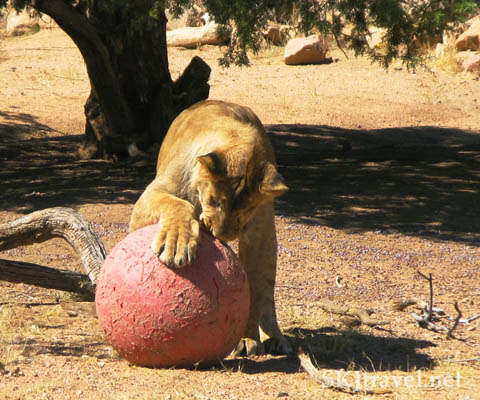 Though the primary focus of this sanctuary is providing homes for big cats rescued from the entertainment industry and irresponsible private owners, there are many other animals here as well who have been rescued from various human induced situations. I’ll introduce some of them to you another day, and to some more of the tigers.

Sadly, I need to add a postscript here. By the spring of 2013 both Sampson the white tiger and Anthony the lion passed away. Sampson developed an aggressive cancer and in light of his advanced age, Keepers decided not to put him through the discomfort and rigors of treatment, and put him down to rest. Anthony passed away in an almost freak incident. He developed an infection in the area where he had surgery as a young cub to fix his internal misconfiguration. He was rushed to the vet and surgery was immediately begun, however his system had gone septic and he passed away right there on the operating table. Each loss of an animal who passes is felt, but the unexpected and sudden loss of Anthony was a particular blow to everyone.