Hoarding ... in the cutest way - Lunchtime for the UWEC Chimps

The chimps can be pretty hilarious the way they hoard food when it is thrown to them on the island. Often, they will gather an armload of food and then go off near or into the bushes to lay it down and then eat it in solitude. Henry said sometimes they even dig holes in the bushes and hide it for later.  Matoke, the alpha male, is naturally adept at this. Yesterday Sara was very funny, grabbing food until her hands were completely full, and then she grabbed more with her feet. So she was sort of hobbling back to the bushes on her heels, chunks of cassava tucked into her toes. 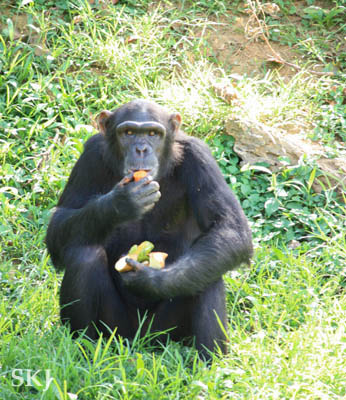 Matoke with a fistful. Second photo came out blurry, but you can still see how he has both hands completely stuffed plus some food already in his mouth. He just runs back and forth across the hillside gathering stuff and intimidating others out of their food. 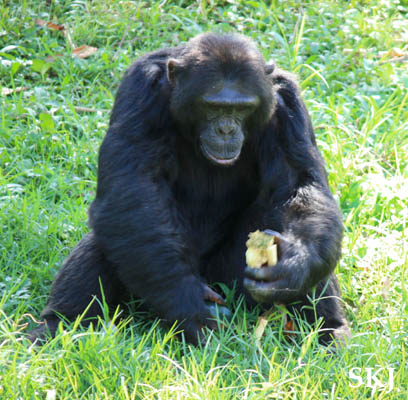 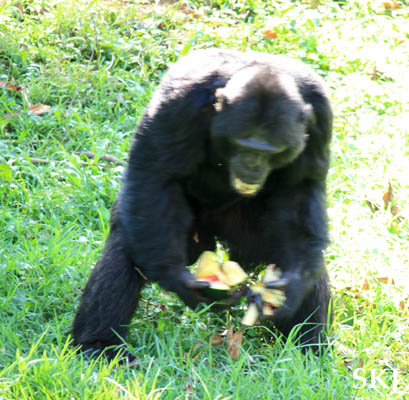 Aluma, incognito and almost always by himself all day, finds a nice quiet spot to munch in. 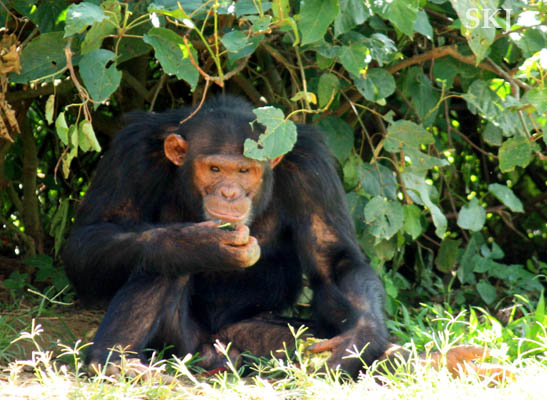 Onapa looks on, waiting for the arena to clear before he heads over to forage the leftovers. He is often the last chimp to come for porridge as well. 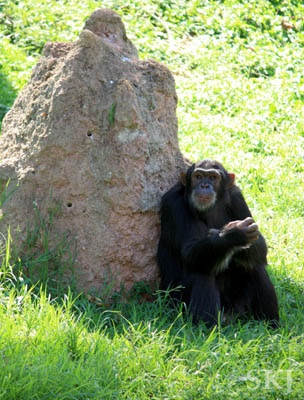 Nepa often takes refuge in or on top of her tire swing. Being the littlest, she’s often chased away from food by the others. 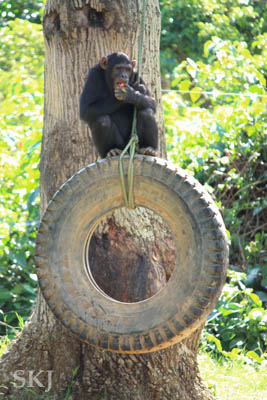 Just love the facial expression on the right. 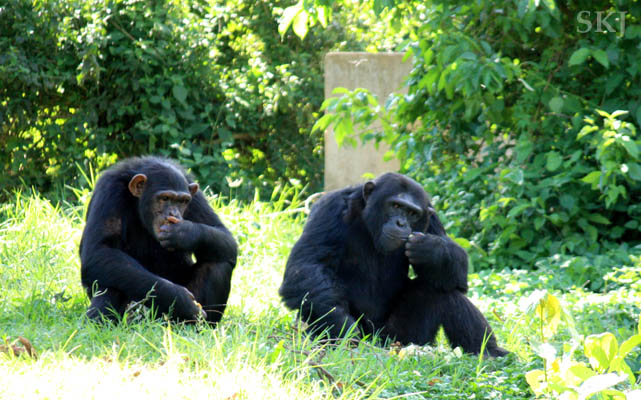 Today at breakfast I watched the rains come across the lake and over the islands. Isaac, who was sitting near me, said typically the rains come from different directions for the islands and the mainland. So if you see rain on the islands, it doesn’t necessarily mean it is coming to here, even though they’re hardly a stone’s throw away across the lake. Usually rains for the mainland come from a more northwesterly direction. However, a short while after that conversation, some spectacular thunder crashed overhead for awhile and then dropped a few bucketfuls of rain.

I may have undervalued myself in the last post, for I asked guy what he thought I could fetch as a bride price and received a wildly more optimistic number. But I can’t hoe the ground from dawn till dusk, don’t yet know how to make Ugandan food (though, since a lot of it is simply cooked and mashed fruit or vegetable, surely I can pick it up), and I can’t even pitch food very competently across a moat for hungry chimps. Nor can I cut sugar cane. At first, Robert had thought maybe 50 cows and 30 goats was a better price than 15 and 8, but after listing these deficiencies, he re-tallied to about 25 cows and 11 goats. And 2 chickens for being a mzungu. Being my closest friend and confidant, he explained rather bluntly the other guy was simply flattering me.

Oh, and Martha now has a boyfriend. I strongly disapprove.